With the USL Championship regular season coming to a close, the race for playoff spots in the groups intensified. Playing two games in the span of three days, Memphis 901 FC and North Carolina FC were in desperate need of points.

After winning on Thursday, Memphis was looking to get another 3 points in the pursuit of their playoff debut. North Carolina wanted to even out the doubleheader and continue their hunt for a return to the playoffs.

This tactical analysis will look at how Memphis’ inability to maintain their momentum cost them another victory, while North Carolina stuck to their game plan and kept their playoff hopes alive.

Former USMNT coach Dave Sarachan lined up the home team in a fluid and attacking 4-1-4-1. Alexander Tabakis started in goal, with Sam Brotherton and Conor Donovan as the centre backs. At left and right back were Akeem Ward and DJ Taylor. Operating as the single pivot was Pecka, and in front of him were Nazmi Albadawi and Ben Speas. The wingers were Hadji Berry and Celtic loanee Emanuel Perez, while Marios Lomis led the line at striker. 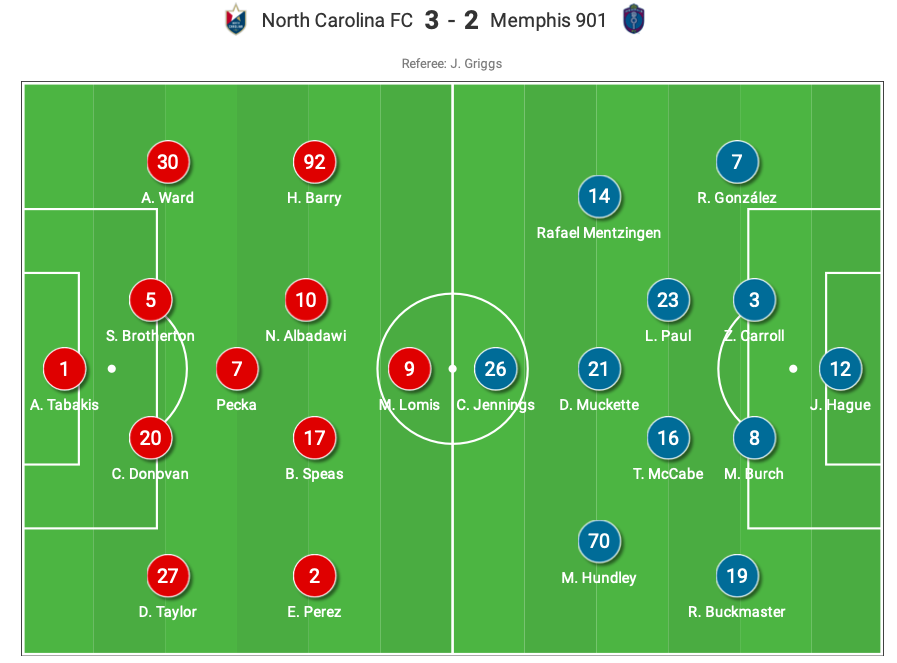 The visitors lined up in a 4-2-3-1 with Jimmy Hague starting between the posts. The defenders from left to right Reese Buckmaster, MLS veteran and captain Marc Burch, Zach Carroll and Raul González. The double-pivot consisted of Leston Paul and FC Cincinnati loanee Tommy McCabe. The front four were Duane Muckett as the attacking midfielder, Matt Hundley and Rafael Mentzingen as the wingers and Cal Jennings as the striker.

Both midfielders operated in a similar fashion. A defensive midfielder would split the centre backs, while the other two midfielders gave the team vertical options in the middle. As we can see in the average positions below, NCFC looked to use the width of the field while Memphis went for verticality. 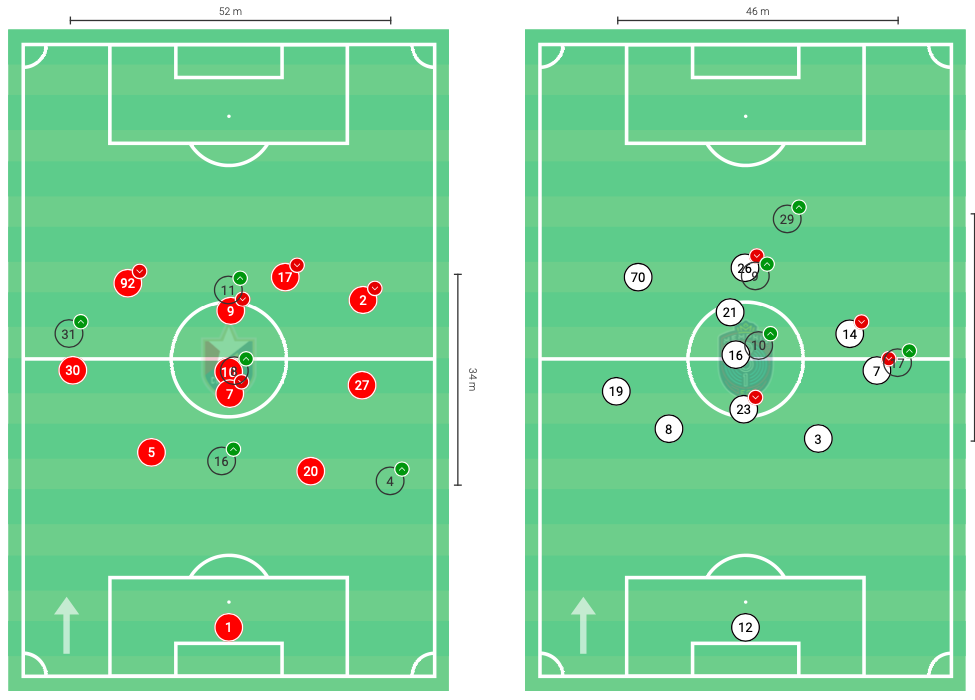 North Carolina clearly wanted to pin 901 FC’s centre backs to isolate their wingers. This can be seen by Speas’ average position next to Lomis. Memphis attempted to play a little more narrow to allow Buckmaster and González space and time to attack the flanks.

In the following section of the analysis, we will see Memphis attacking tactics that allowed them to race to a 2-0 lead.

901 FC came out swinging from the first whistle, constantly putting the home team under pressure with waves of attacks. Analyzing their attacks per minute, we can see just how this helped them score the opener. Using a mixture of short combinations with long balls, the visitors were able to establish their dominance. 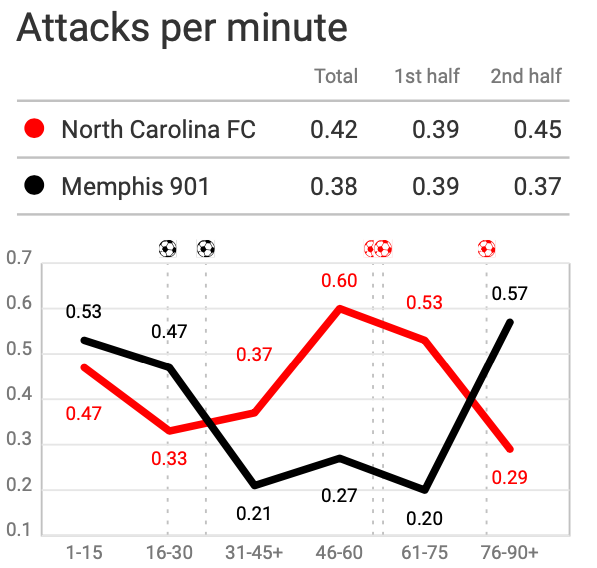 In a way similar to Liverpool, Memphis had no problem utilizing long passes and would attempt to use knockdowns to progress the ball. We can see from the graphic below how they increased their long passes throughout the first half to pin NCFC back in their defensive third. 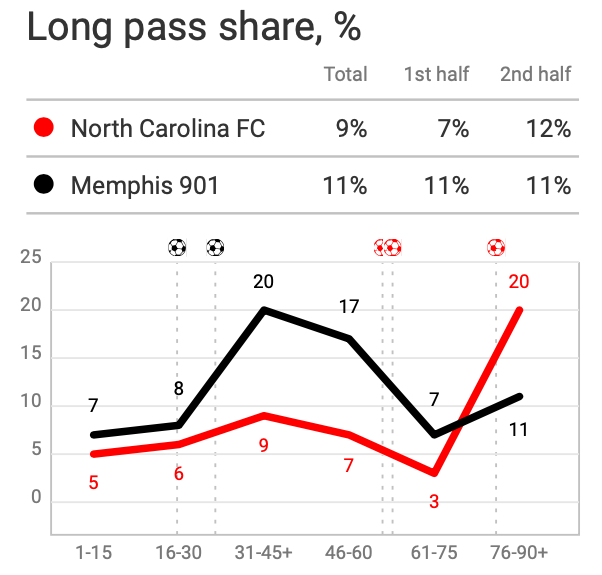 Once they established possession they would look to play either outside back, and have them serve crosses into Jennings. Memphis second goal will serve as an example of this tactic being executed to perfection. 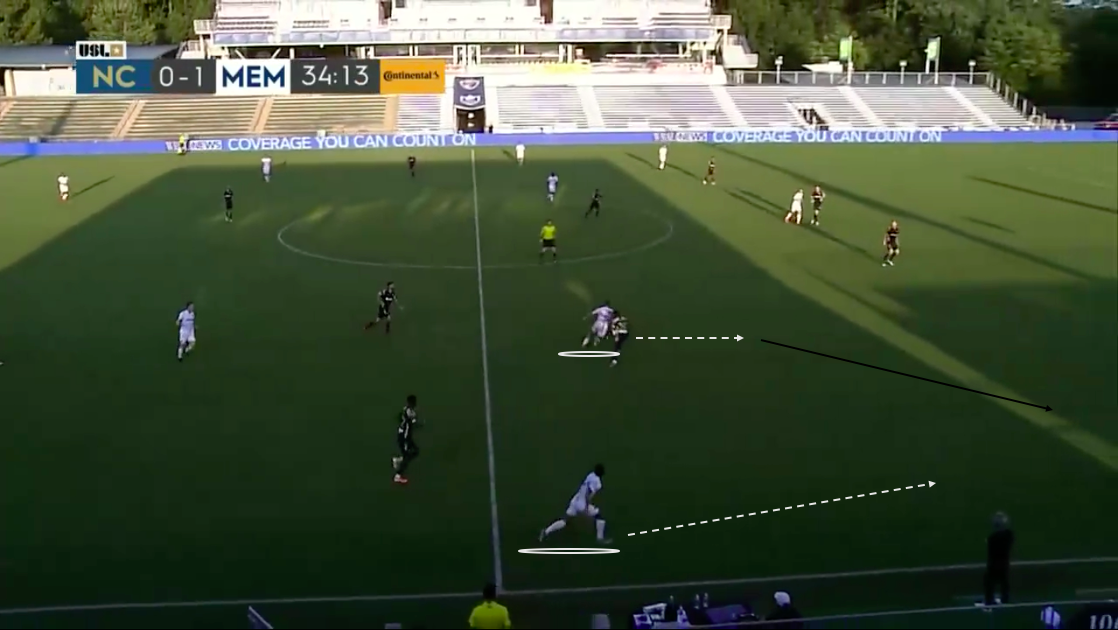 We pick up the sequence after Mentzingen receives a pass in the half-space from centre back Carroll. The right winger’s positioning allows González to sprint into an attacking position. 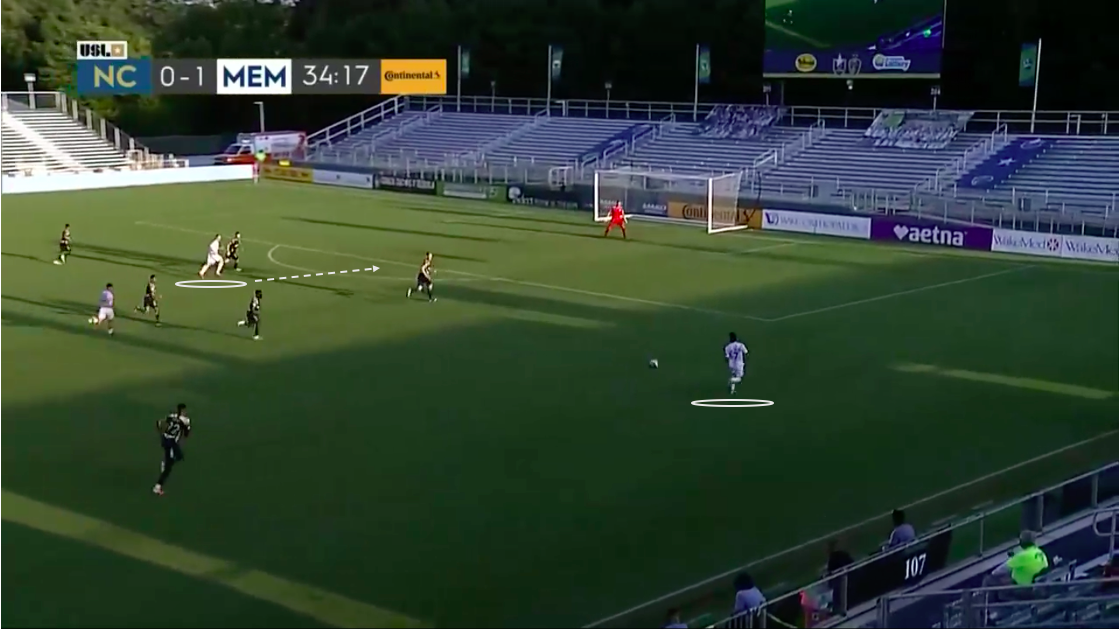 The outside back is able to dribble towards the penalty area comfortably as Jennings sprints into position. 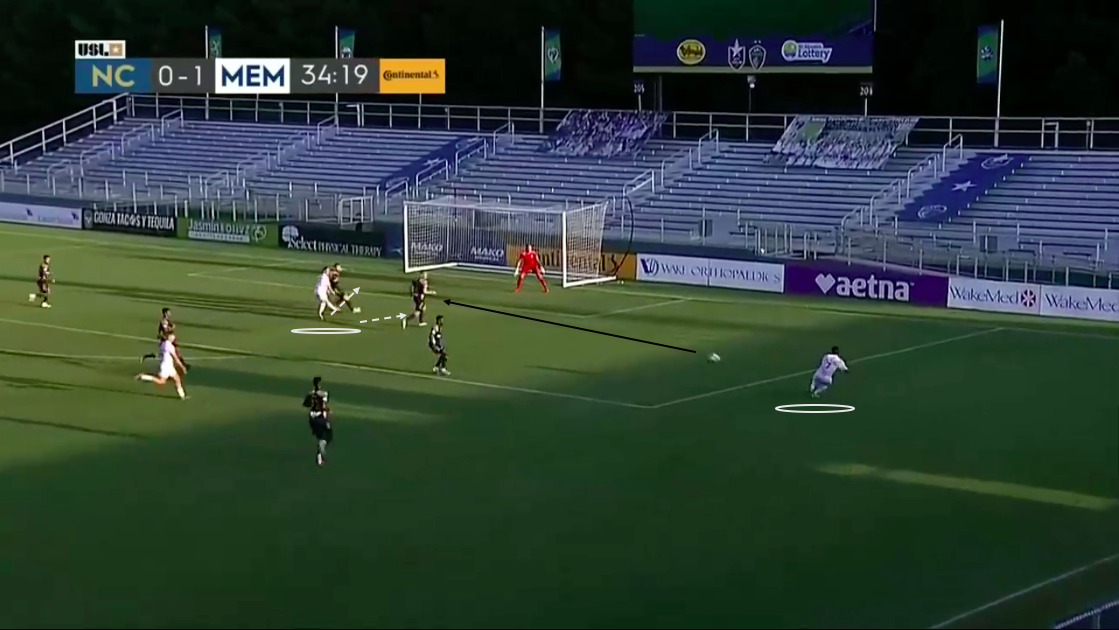 As the ball is being played, Jennings makes a double run to shake the defender. His first move is towards the front post and once the defender adjusts his positioning, Jennings then sharply moves behind him. This allows the Memphis striker to strike the ball behind the defender and the goalkeeper resulting in a goal.

Chess match in the middle of the park

Defensively 901 FC looked to force the home side into misplacing passes so they would be able to win it back in the middle of the pitch. Their defensive tactic was to make it as difficult as possible to play through the centre 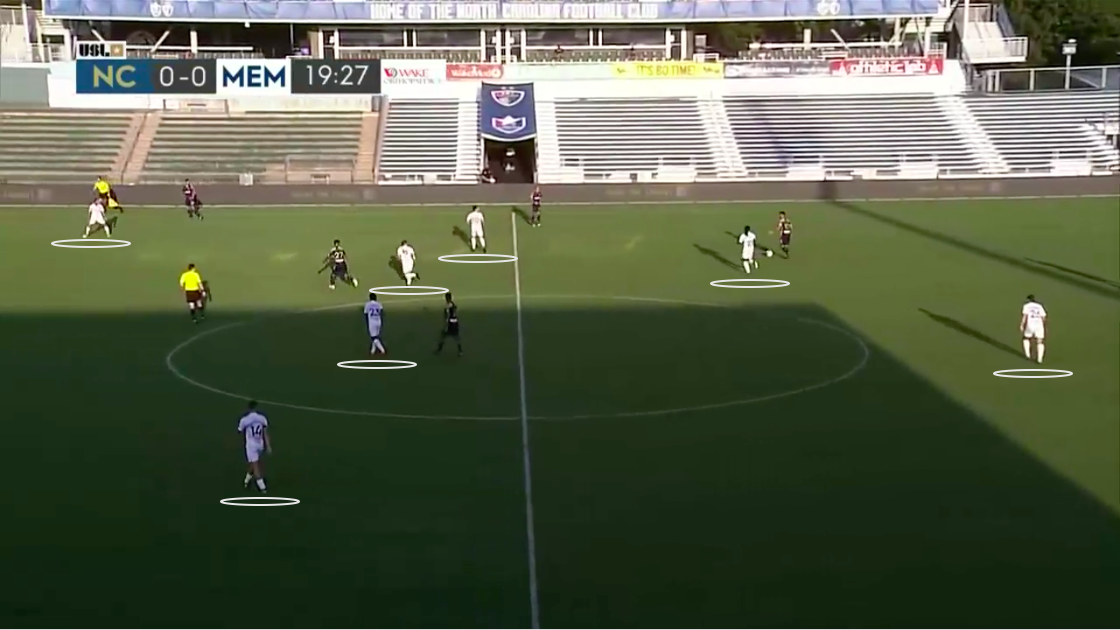 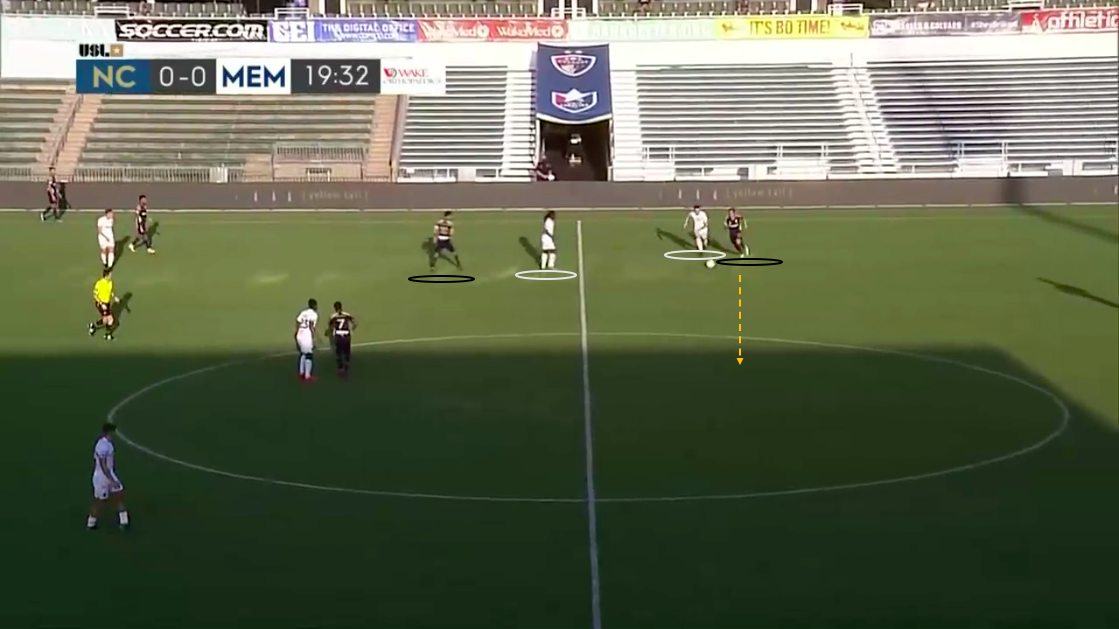 North Carolina would find their way around the block by drawing Memphis to one side and quickly switching the point of attack with their back four. Analyzing the same sequence, Hundley is unable to force Speas into an error with his press, and the midfielder dribbles towards the middle. 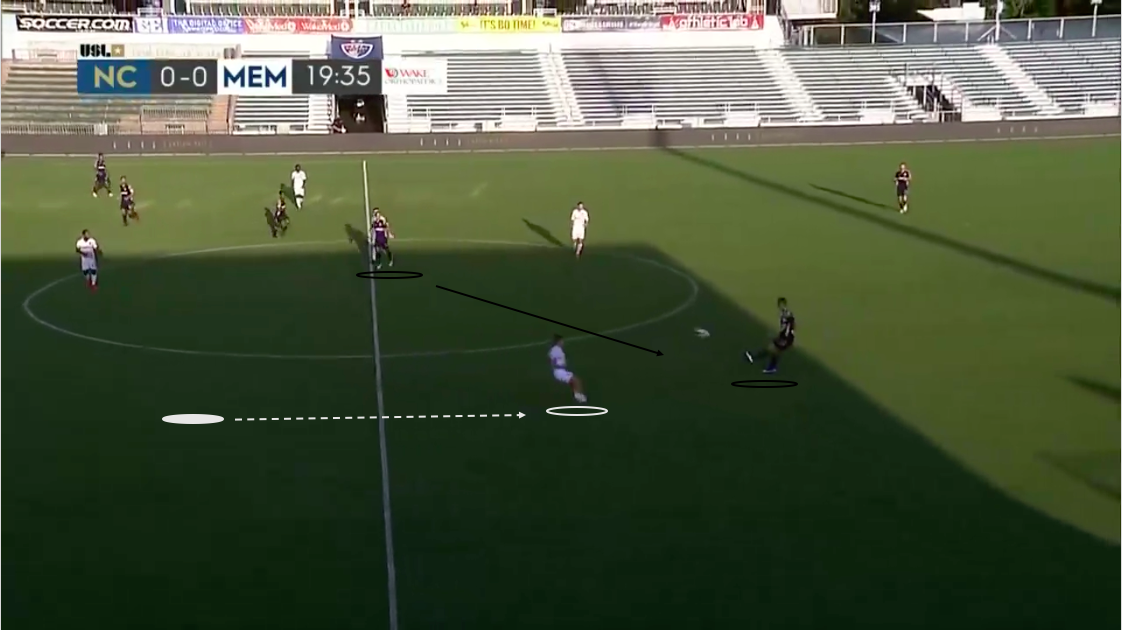 Since Pecka has now dragged Muckette back into the midfield with his run, Speas is able to play a simple back pass to Brotherton. The back pass is clearly a pressing trigger for Mentzingen, and the winger jumps from his position to put the centre back under pressure. 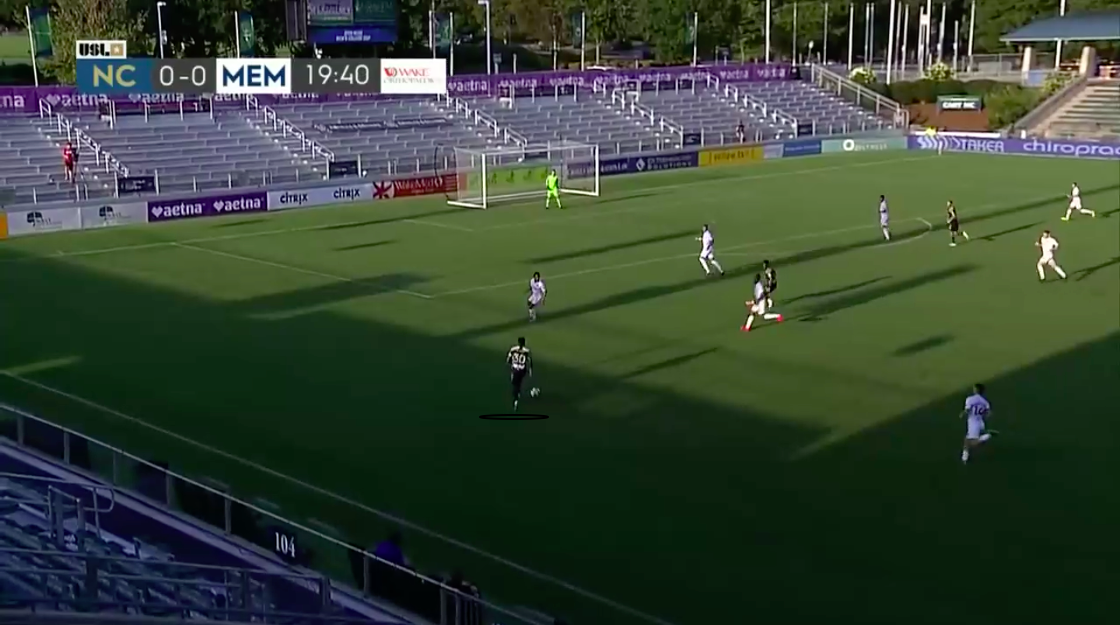 Brotherton clips a one time pass to Ward and the home side are off to attack the Memphis penalty area. Although the attacking move ends up breaking down with a blocked shot, this is a tactic that North Carolina utilized to progress into the attacking third in the second half.

Memphis was able to hold North Carolina to 3 shots in the first half, so Sarachan made a few substitutions to shake things up. Replacing Lomis with the towering Kristo and Pecka with Fortune, he looked to gain a little momentum by playing these two players in more advanced positions than Lomis and Pecka.

Using the analysis above, we can see that NCFC put Memphis under pressure early in the second half with quality chances. They were also able to maintain enough pressure throughout the second half to come out victorious.

Their biggest adjustment came from their increased usage of runs from deeper positions. By having a midfielder arriving late into the penalty area, NCFC was able to create more scoring opportunities. Using an example minutes before the home side’s first goal we can see this tactic being executed. To begin the sequence, we see Barry with the ball under light pressure from González. 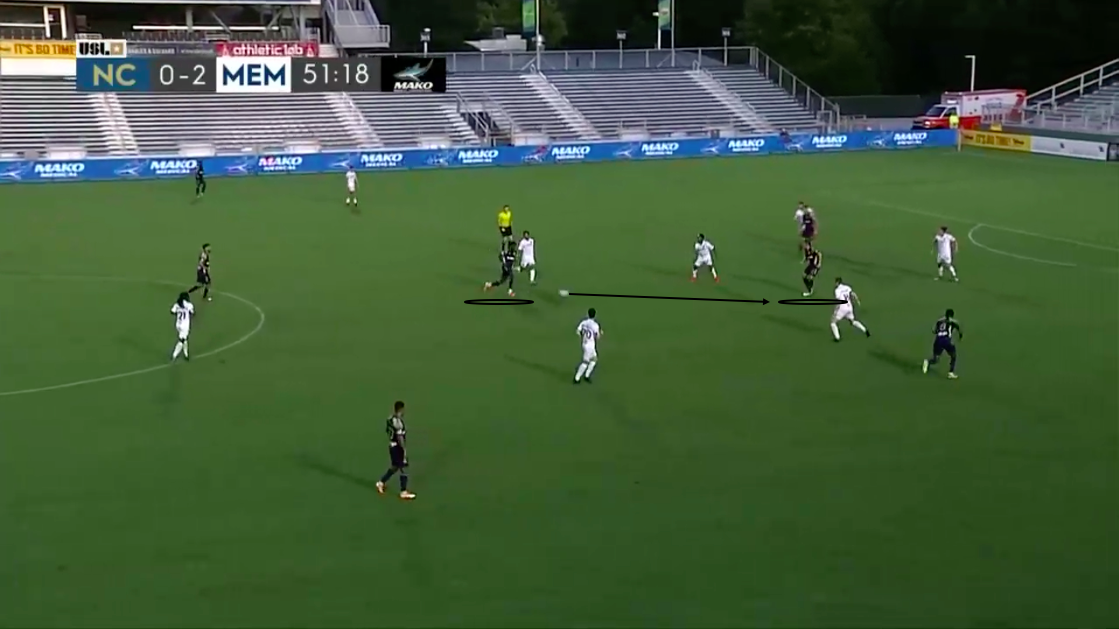 The left-winger is able to pass the ball into Speas’ feet. Speas is able to turn while protecting the ball from Burch and hits a pass into the path of Perez. While all of this is happening we see that Barry has continued his run after the initial pass. 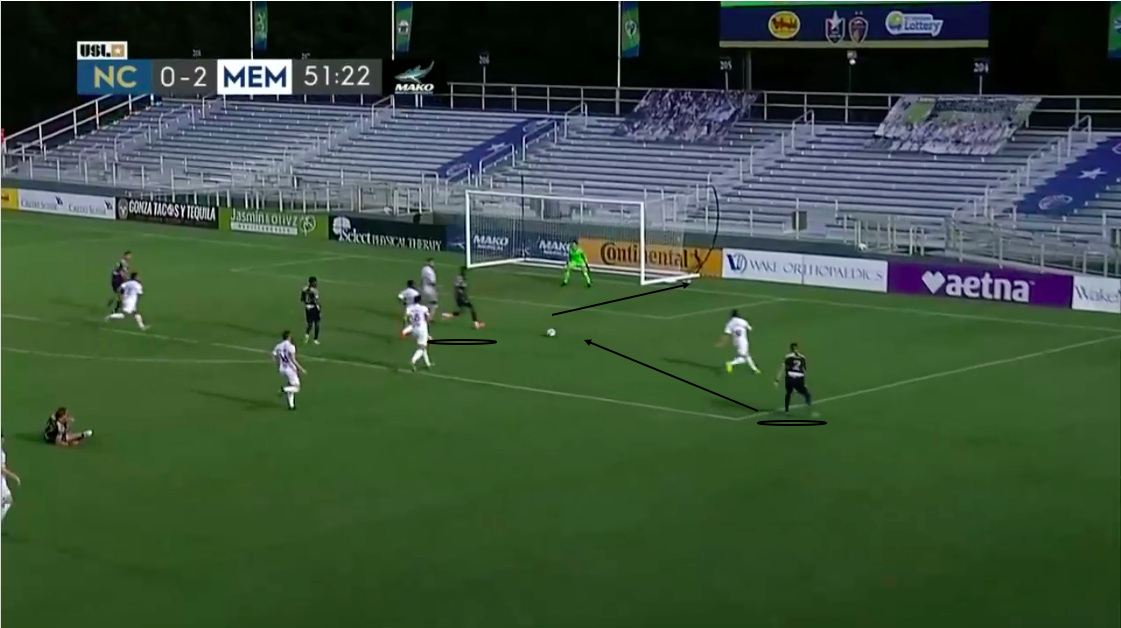 Since Perez is essentially unmarked due to the runs into the penalty area, he can comfortably cross to Barry who shoots wide of the goal.

In the next section of the analysis we will see how 901 FC was unable to adjust to NCFC’s increased pressure.

Although the visitors did compete in the second half, they did not respond well to NCFC’s adjustment. Their inability to track the runs from deep came back to haunt Memphis.

The winning goal came from an unmarked midfielder arriving late into the penalty area. Moments before Memphis were lucky to survive a similar attacking move. Below we will look at the similarities of the two moves. 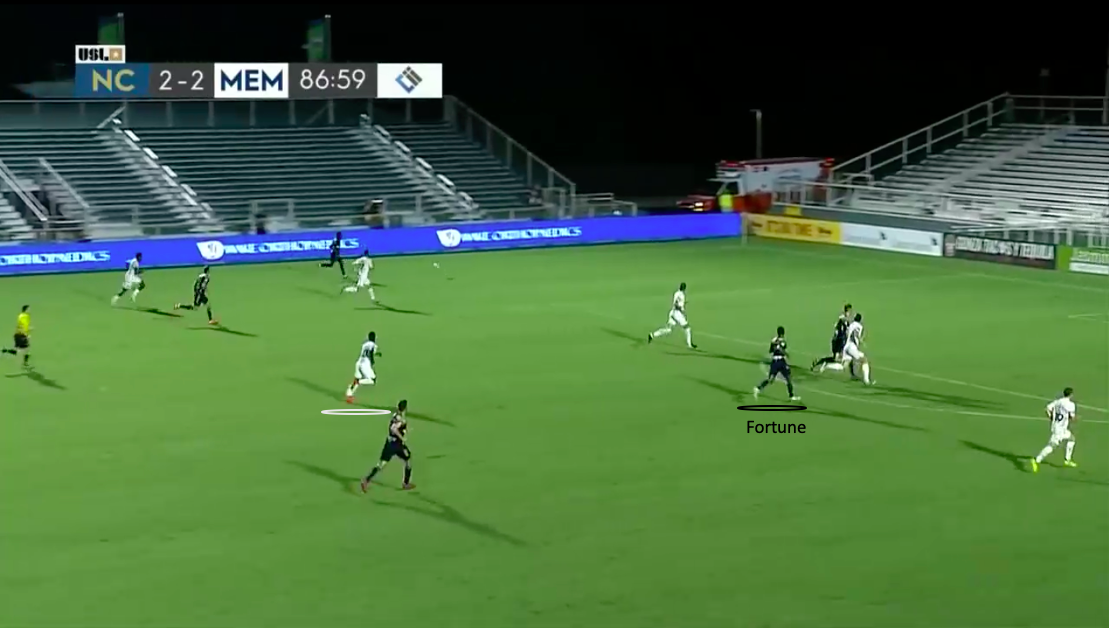 In the first sequence, we see NCFC’s midfielder Fortune playing in an advanced position between the centre backs. Since Memphis substitute Koffi is a more attacking player, he is too far behind to mark. 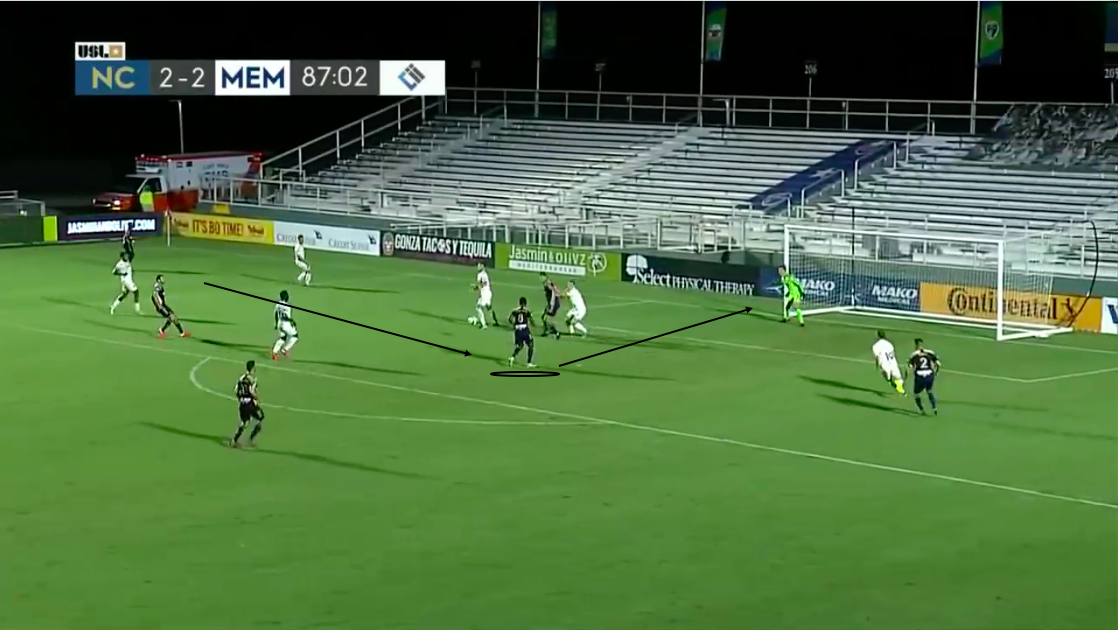 While Memphis defender Burch is preoccupied marking the forward, Fortune arrives near the penalty spot unmarked. Fortune meets the cross with a first time shot but misses just wide. 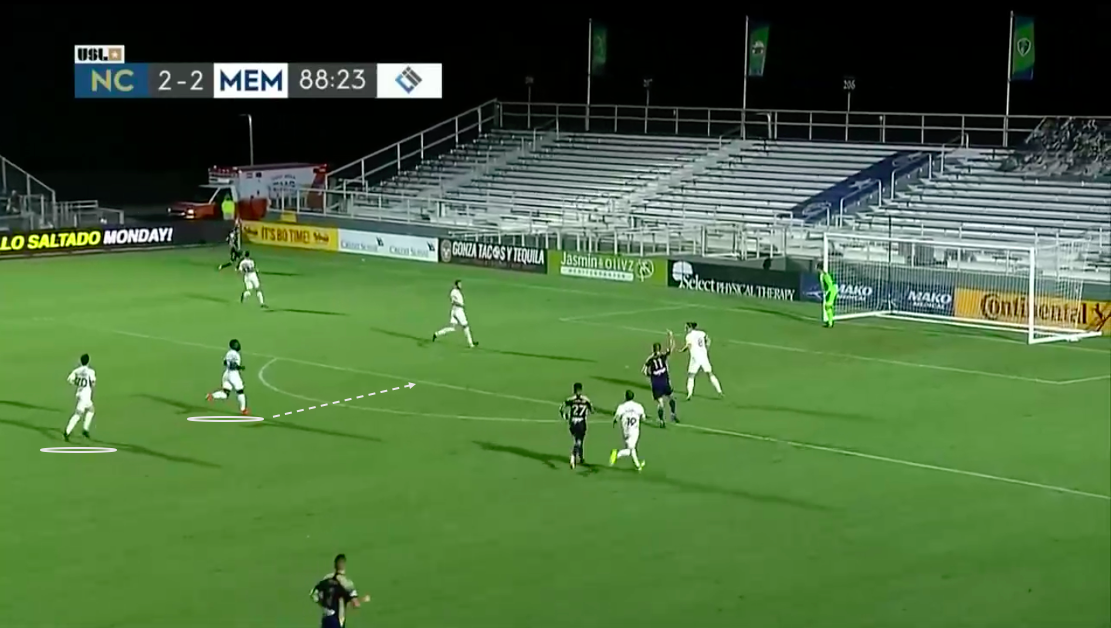 A minute later, North Carolina is attacking down the left once again. We see Koffi has tracked back further, but he and Hundley are ball watching. 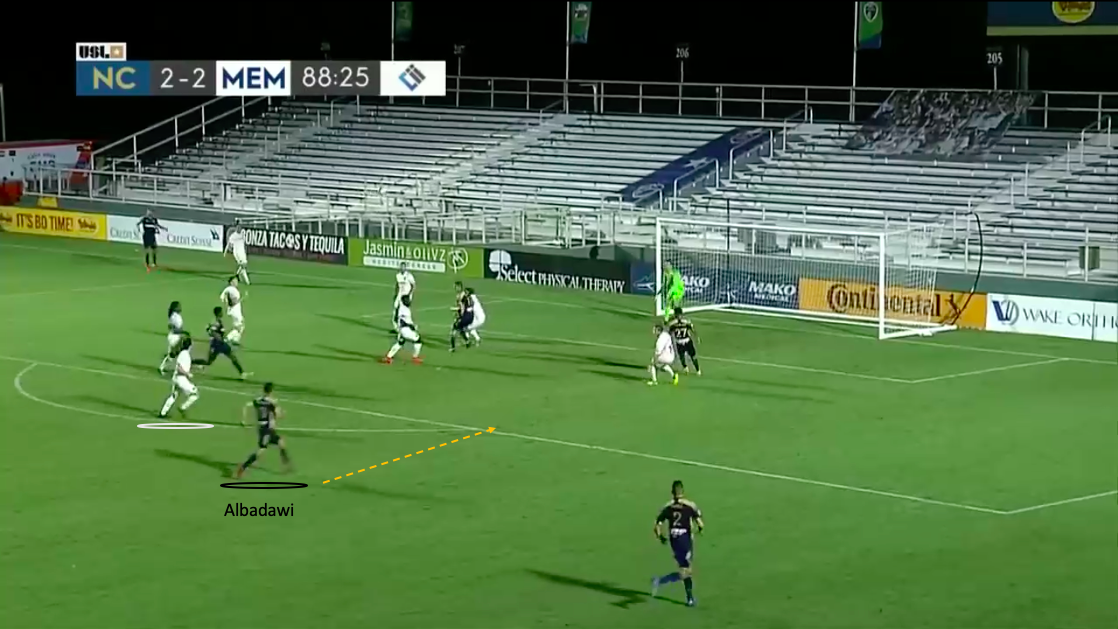 Since North Carolina was pushing for the winner, Albadawi made a late run into the penalty area. While Muckett and Koffi have made their way into the box to defend a potential cross, Hundley is not aware of the run being made behind him. 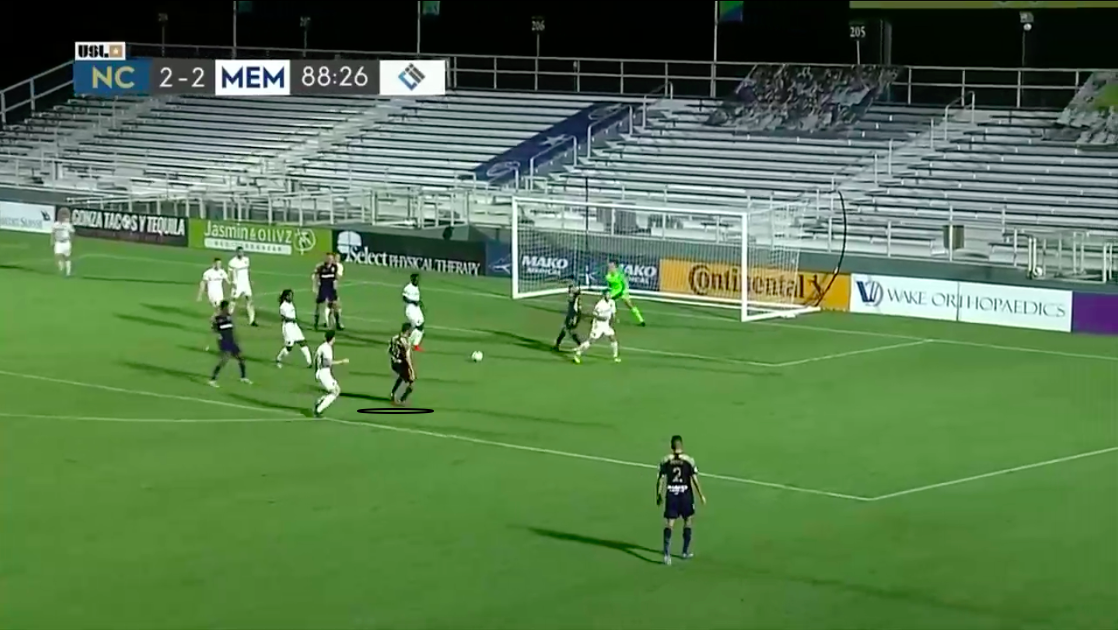 Although the cross is a hopeful one, Albadawi is able to aim his first time shot into the bottom left corner.

This lack of defensive discipline was Memphis’ downfall.

Memphis let another 2-0 lead slip away against North Carolina, only this time they were not able to come out victorious in stoppage time. They will need a lot of outside help if they are to make the playoffs in only their second year in existence. Memphis will need to rally quickly if they are to beat Louisville City, who are unbeaten in 7.

North Carolina still has quite a bit of work to do if they are to return to the playoffs. Sarachan must get his side to come out strong and stay steady in matches if they are to win out. With games against the top teams in the group on the horizon, their work is cut out for them.