Manchester City Women won 3-0 against Everton Women on Sunday in a match that witnessed three assists from Caroline Weir and goals from Ellen White, Janine Beckie and Gemma Bonner. This win was very important for the Citizens who beat their direct opponent in the standings and got close to the top three spots that guarantee Women’s UEFA Champions League qualification.

On the other side, the Toffees are now fifth just under Manchester City in the FAWSL standings and their loss in this game didn’t really help them and made their qualification campaign a bit more difficult even though the difference between both teams is just one point for the moment.

In this tactical analysis article, I will break down both teams tactics in attack and defence and show how Manchester City were able to be the better playing team in this match and how Everton were unable to get back in the match after conceding three goals. But first of all, the analysis will begin by presenting both lineups.

Everton started this game with a 4-3-1-2 formation that included Sandy MacIver as a goalkeeper, Megan Finnigan and Damaris Egurrola as centre-backs, Ingrid Wold as a right-back and Danielle Turner on the left flank. The midfield was composed of three central midfielders who are Izzy Christiansen, Maéva Clemaron and Abbey-Leigh Stringer. Ahead of them we find Lucy Graham who played as an attacking midfielder just below Nicoline Sørensen and Hayley Raso, the two strikers.

On the other side, Manchester City played according to their usual 4-3-3 formation, relying on Ellie Roebuck as a goalkeeper, a defensive line made up of Gemma Bonner, Steph Houghton in central defence and Lucy Bronze and Demi Stokes on both flanks. In midfield, the team used Keira Walsh, Jill Scott and Caroline Weir as central midfielders while in attack Rose Lavelle played on the right-wing, Janine Beckie on the left-wing, and Ellen White was the team’s striker. 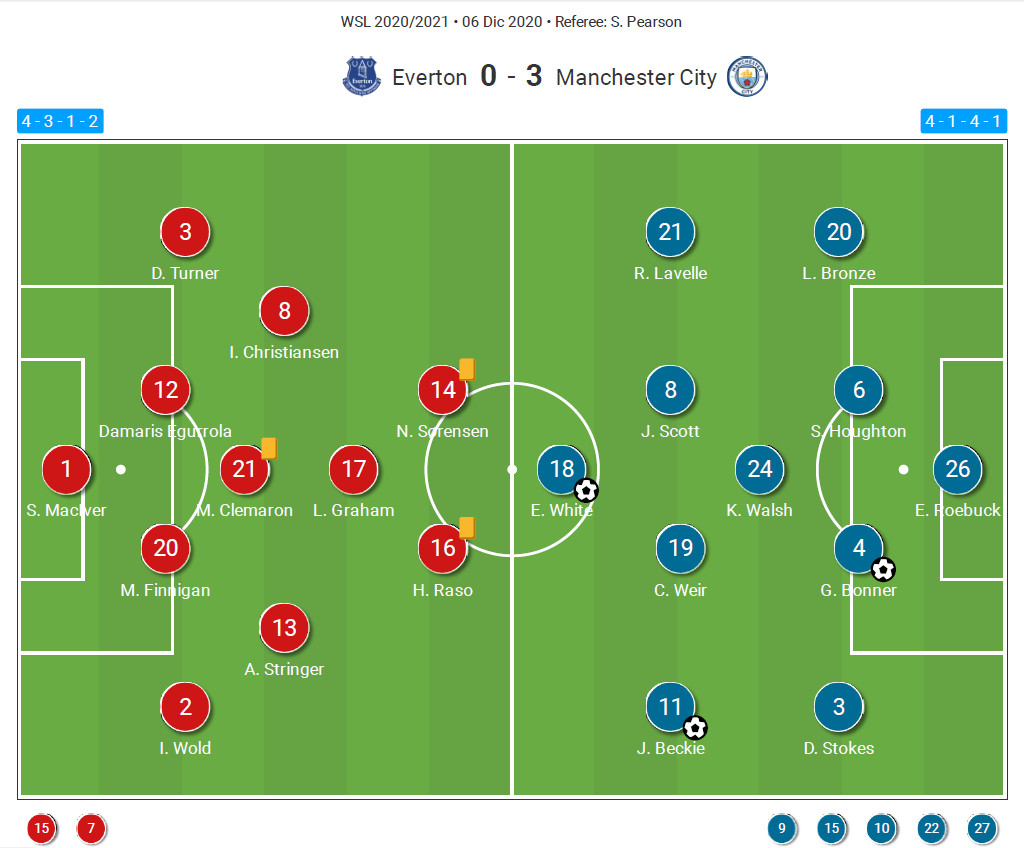 The game started in a balanced way and both teams had equal chances of winning this match. And in the first part of the first-half, Everton’s high pressing was very noticeable and disturbed Manchester City in their build-up phase. As a result, we saw Manchester City defenders unable to neither advance with the ball freely nor pass to a free player since Everton’s pressing was always there and the players who contributed in it were very dynamic and attentive.

And by players we mean Raso, Sørensen and Graham who moved on the same line with the other two when out of possession. And you can see from this picture an example of how effective this pressing was, since in this action Houghton received the ball while being pressed and was obliged to give away a corner for the Toffees thanks to their continuous high press. 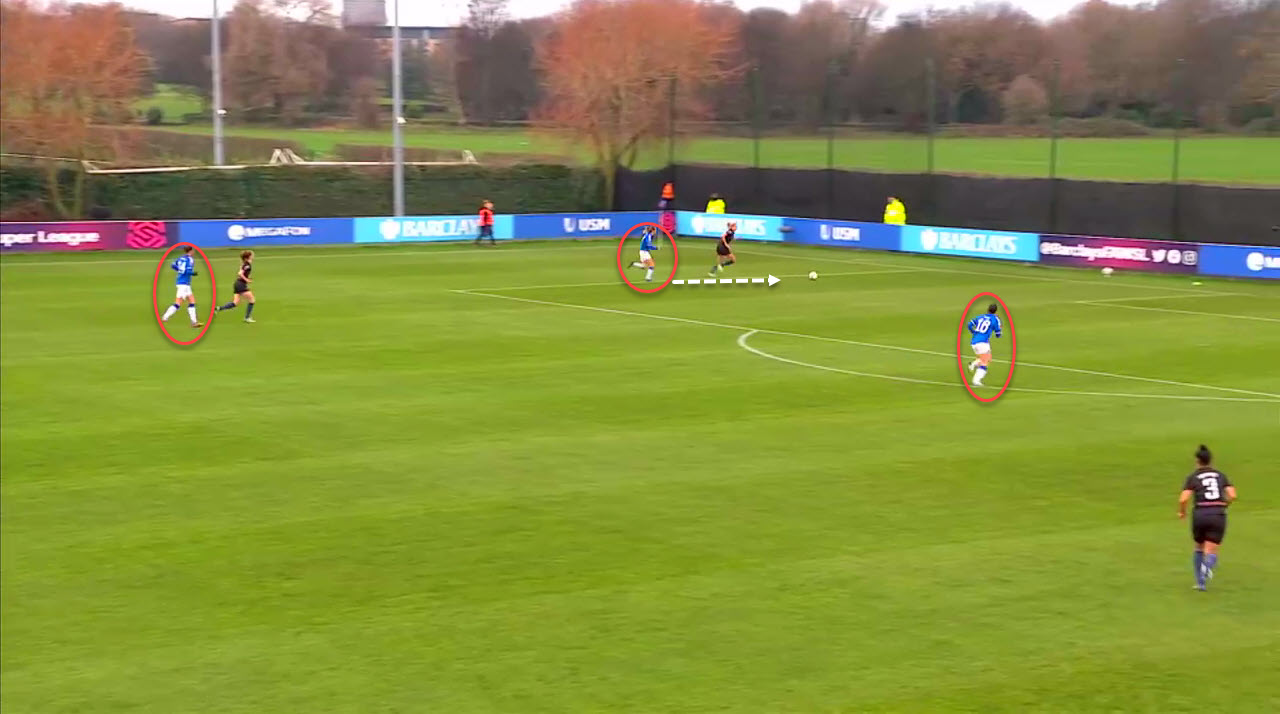 Yet, despite the efforts made while pressing, Everton were not decisive in front of the goal and made many wrong decisions in the final third either in passing or in shooting. And this led to them having only six shots in this match and only two of them were on target. So in this regard, Everton will need to improve their attacking plays by mainly focusing on enhancing their passing accuracy in the final third. Their percentage of 73.51% in passing accuracy in this match can definitely be improved in the next games if they aim at climbing to the top spots.

To clarify this even further, in this action for example, Raso took the ball from midfield and advanced but at the end she made the wrong passing decision to the marked teammate instead of passing to Wold who was completely free on the right-wing and could have created danger if she received a through pass from Raso. 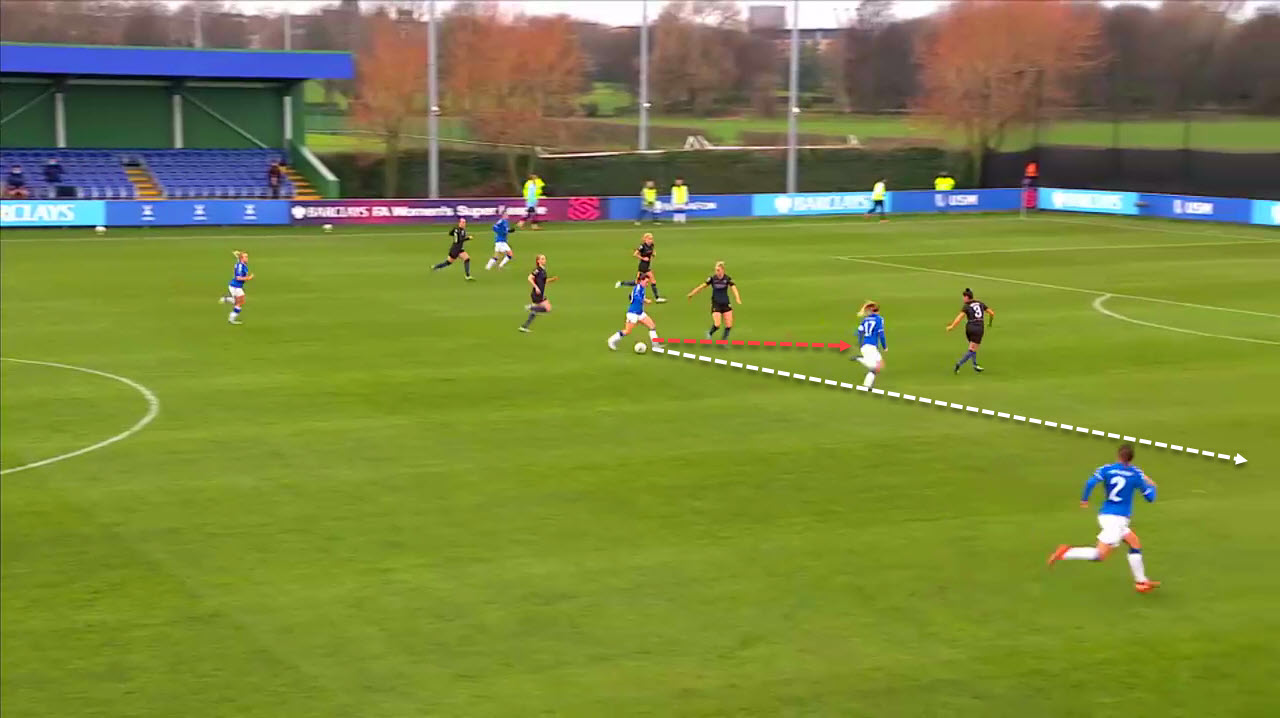 Manchester City however made a very noticeable progress in attack during this match even though Gareth Taylor rested many important players such as Chloe Kelly, Sam Mewis, Georgia Stanway and Alex Greenwood since he wanted to keep his team fresh for Wednesday’s UEFA Champions League fixture against Göteborg.

The team as a whole was realistic and attacked with confidence despite starting the match in a not so confident way. And by playing regularly in Everton’s final third the team was able to create many chances and shoot 21 shots with five of them on target. And the fact of shooting 21 times per match in itself shows how Manchester City’s attack performed well in this match even though five shots on target are little compared to the total number of shots.

The first goal came from a well-played combination between Weir and White. The first crossed the ball accurately when she saw White asking for the ball and moving towards the box, and the latter confused Everton’s goalkeeper with a beautiful chipped header that ended inside the net. 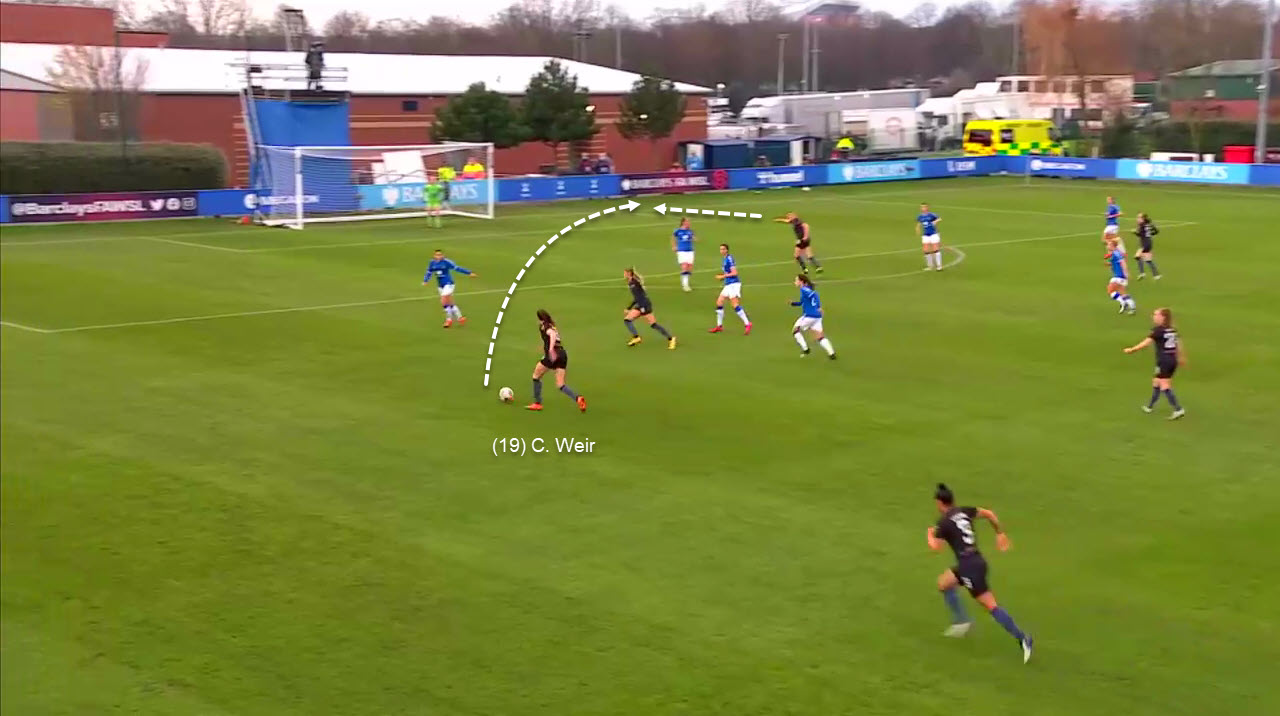 And then a second-goal came just a minute after from corner-kick that Bonner was able to convert into a goal with a header, exploiting Everton’s wrong marking. After scoring the second goal, Manchester City became more comfortable and started playing with ease and they even found no more problems in the build-up phase since they played with more patience and confidence and escaped Everton’s pressing more often.

And this also happened because Everton lost the energy and determination with which they started the game and were not able to get back in the game again especially after conceding the third goal in the last minutes of the first-half. Therefore, this psychological part played an important role in favor of the Citizens and against Everton.

The third Manchester City then came thanks to a fast counter-attack that was started by White who passed to Weir who advanced freely on the left-wing and then waited for her teammates to reach the box and then crossed the ball perfectly once again for Beckie’s header. What facilitated this goal even further was Everton’s defensive weakness in these aerial duels. For instance, in this action the defender in a red circle, Damaris Egurrola, was only looking at Weir and did not look at her opponents, neither the one in front of her nor the one behind her. And therefore, she wasn’t even aware that Beckie was behind her and left her unmarked. 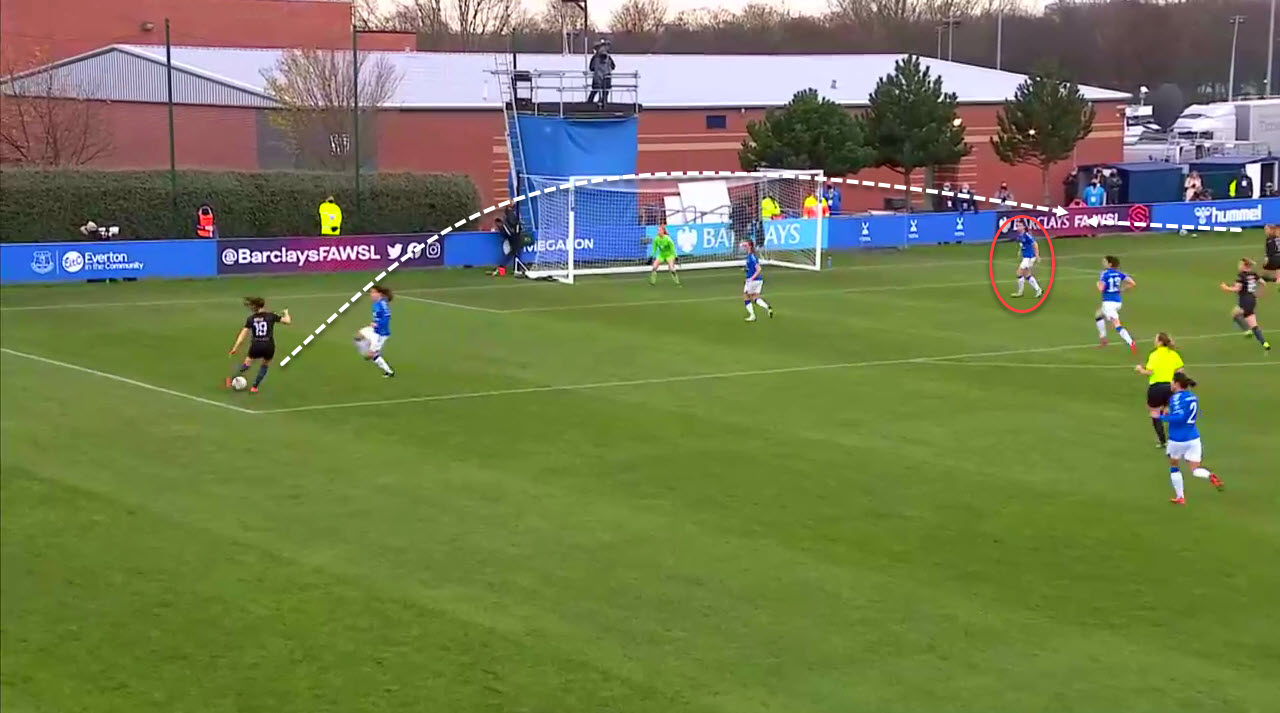 And this kind of defensive weakness can cause many problems for Everton in the coming fixtures if not fixed, especially against teams who rely on set-pieces or on long-balls.

For Everton we can’t say that the team performed very well but overall, most players did their best to cause problems for the Citizens. And let’s not forget that the team was lacking their main striker, Valérie Gauvin who was needed in this kind of games. In defence, the team should have performed better especially in the first-half in which they conceded three goals partly due to individual mistakes.

And in attack, Raso, Sørensen and Graham did their best in terms of pressing with the help of Christiansen and Stringer. However, when it comes to accuracy in key passes or quality of finishing, the team could have really done better in a match in which you don’t get a lot of chances.

For the visitors, Weir was definitely the best player on the pitch with three beautiful assists and an excellent performance, while White, Beckie and Lavelle also contributed a lot in all Manchester City’s attacks and helped defensively as well. Also, Bronze and Stokes were excellent on both flanks in terms of marking and in the build-up phase. And let’s not forget Bonner who started for the first time this season, scored a goal and was solid throughout the match at the back.

This win will pave the way for Manchester City to focus more on reaching the top three spots and give them more confidence and determination to reach their season objectives either in FAWSL or in the Women’s UEFA Champions League as well.

However for Everton the team needs to forget this match while focusing on strengthening their defensive performances and working on being more decisive in the final third. And with the return of Gauvin, things will hopefully get better for the team in terms of attacking performances.