Milan have performed in quite a high level this season in Seria A while Juventus and Inter are all behind them. In contrast, Sampdoria are not having a great time as they didn’t win a game for the past five matches. Thus, this game was seen as a chance for Milan to take over the game and indeed they did so with a 2-1 win. 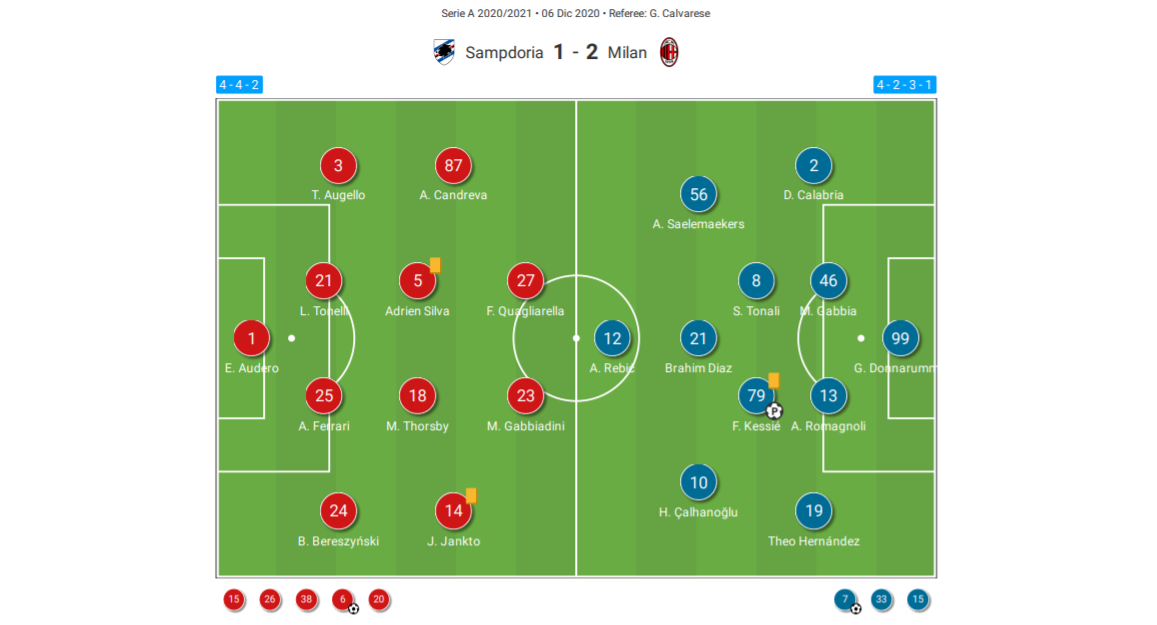 Milan dominated in possession (63%) and they had 13 shots with 6 on target. They manipulated Sampdoria’s defence and controlled the match with their positional play. They deployed a 4-2-3-1 system with two full-backs high up the pitch. From time to time, a pivot would drop to the backline to form a back three to help circulate the ball against Sampdoria’s 4-4-2 system with a plus one.

In essence, they initiated their attack from the flank with two full-backs. The pattern that occurred the most in the first half was to initiate the attack on the left flank, but this was a tactical decoy to instigate Sampdoria to shift over to the left flank in a compact manner. Then the real attack would start by switching the play to the right flank by the midfielders or centre-backs.

As the ball travelled to the feet of the switching-play defenders or midfielders, the right flank unit would position themselves to cause a decisional dilemma for the opposition left-back, Augello. Calabria was positioned high and occupied the width and the right-winger Saelemaekers would position himself on the half-space, trying to pin the left-back. As the whole block of Sampdoria shifted to Milan’s left flank, it took time for them all to shift over to the right.

Nevertheless, Sampdoria’s ability of shifting block was hindered as their centre-backs Tonelli and Ferrari were not fast. When the ball was ready to be delivered to the right flank, Augello would find himself in an awkward status that if he stayed compact to the defensive line to take care of the right-winger, the right flank was left with a complete opening and Calabria was allowed time and space on the ball to execute 1 v 1 on the right. His deliveries into the box or runs into the box were of great threat to the opposition.

As you could see from the image above, the right-winger pinned the full-back to the centre while the switching play was taking place. Calabria took advantage of the width occupation and enjoyed the opening on the flank. He possessed space and time on the ball to run towards the touchline and delivered the cross.

As time went by, the attack on the right overwhelmed Augello and he changed his decision of staying compact to the line. He then chose to shift quickly to the side to prevent Calabria from having too much time and space on the ball. However, this meant that there would be a huge gap in the defensive line. On this occasion, the inverted winger or the number ten would react to attack it and they could easily bring the ball into the box to hit the final passes. 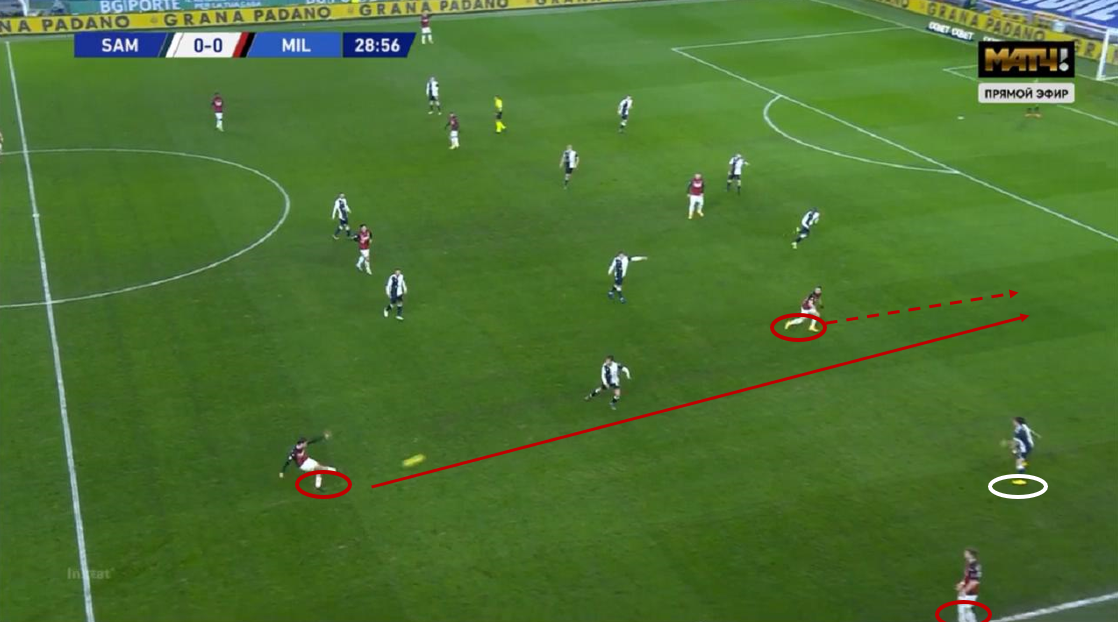 As you could see from the above image, Sampdoria’s left-back Augello could stay wide to prevent space and time for Calabria. This means that a gap would be exposed between Sampdoria’s left-back and left centre-back. This was the trigger for the attacking midfielder to attack into that space. He was then picked as he latched onto the ball in the half-space and ready to hit the final pass.

This was the attacking pattern on the right against Sampdoria’s mid-block. Another common pattern was to play out from the back to entice high-pressing from Sampdoria. Milan would circulate the ball in the back, instigating the whole block of Sampdoria to step up and put pressure on the ball. As the block of Sampdoria moved forward, a back pass to the goalkeeper Donnarumma would be released and Donnarumma would hit long to find front players who ran behind the defensive line. First-ball flicking-on to the runners in behind would also be a choice. This pattern was effective in creating scoring opportunities and led to some shots for Milan.

Even though most of their attack could not be maintained for a very long period of time, in this match there were some moments that they succeeded in keeping possession and putting the ball to some advanced areas. They did so by initiating the attack on the flank in the midfield area. Where they differed from Milan was the development of the ball would be towards the centre. To accomplish this, some off-the-ball movement patterns were evident and efficient in creating spaces for the channel of ball movement.

The pattern was simple – a winger or wide midfielder possessed the ball on the flank in the midfield area. This was the cue for the runs to be executed: the ball-side striker would first run horizontally to the side to drag a defender with him, opening spaces in the centre, and creating a passing channel for the midfielder to receive. Then as the ball was delivered to the midfielder, the striker would accelerate to start his second run vertically in full speed in a synchronised manner, aiming to provide a final pass option and the midfielder in this scenario would have a final pass channel as striker’s first horizontal run created that. This can be seen from the above image and this pattern was effective with the striker’s out-curved run.

However, there were times that the runs were not executed effectively as they were sometimes not in a synchronised manner or the striker did not complete an out-curved run, but a diagonal one. Thus, ball possession lost was due to the lack of completion of tactics and the ball would be recovered by Milan on the flank in Sampdoria’s attack initiating stage.

What we did not mention on the pattern above was that the full-back on the ball side would position himself high up the pitch to occupy the width. This kind of positioning would vacate the space on the flank for Milan to exploit after their recovery on the flank. In Milan’s offensive transition, they would take advantage of that opening to progress the ball to the final third. Final passes might be easily released on this occasion. 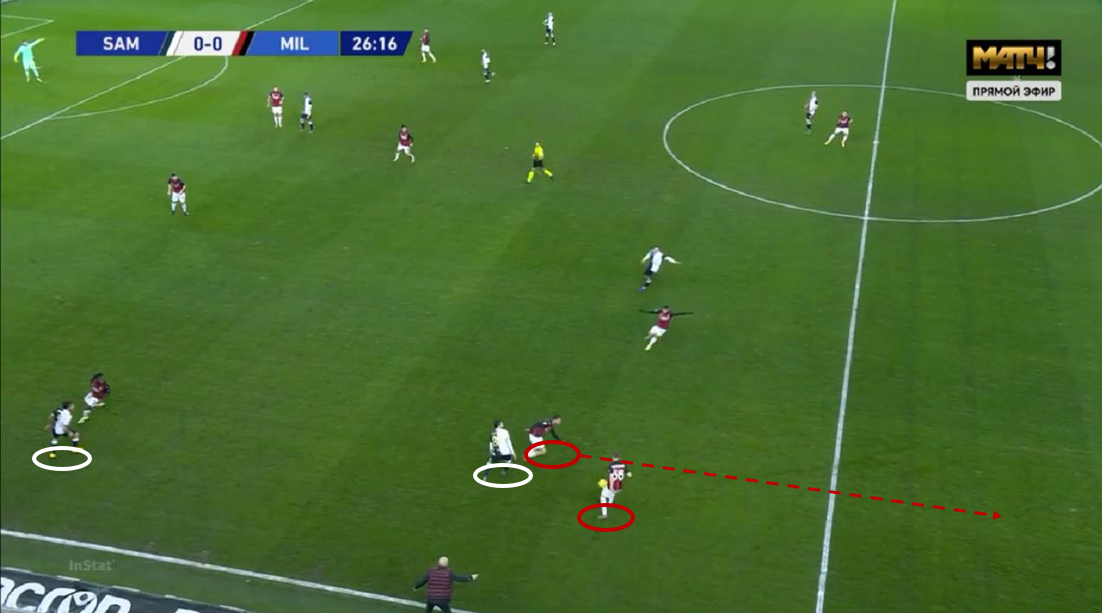 Above is a manifestation of the recovery on the flank and the start of the offensive transition. As you could see, Sampdoria’s left flank unit Augello and Candreva were high up the pitch and at this moment they lost possession and both were behind the ball. Milan’s right attacking unit could easily progress the ball into the advanced area with their runs.

Other issues worth mentioning

Though Sampdoria did not seize the initiative in this match, they did all right in some aspects. For example, they did well in central defending, especially when the midfield line was bypassed. The midfielders were fast in tracking back to support the defensive line in doubling-up and regain possession. Under this defending, Milan was not capable of using the centre in penetration.

While Milan dominated in possession, there were still some potential defensive issues for them and it might be fruitful for their opposition to utilise these drawbacks.

The most evident one should be the poor marking of Theo. From the above scenario, we could spot that Theo was the one who could see the ball and also was the man in the defensive line. Theoretically speaking, he was the one to track the runner or just position himself to prevent through passes. Nevertheless, he was only ball-watching while completely missing the runners in front of him. His positioning was also not proper to prevent through passes and the defensive line was bypassed due to this. Fortunately, the opposition’s first touch was not decent and a shooting opportunity was missed.

Milan won this match without much surprise. We shall continue to see if they could actually win a title under Stefano Pioli after all these years.