On eve of the first of November 2020, there was an intriguing game to watch in Serie A. Roma weren’t performing at their best in Serie A while Fiorentina ranked below in the mid-table. However, with former Bayern Munich player Frank Ribéry, former Real Madrid player José Callejón, and former Chelsea player Pedro all on the pitch, the game had a lot of sophisticated tactics to be studied. 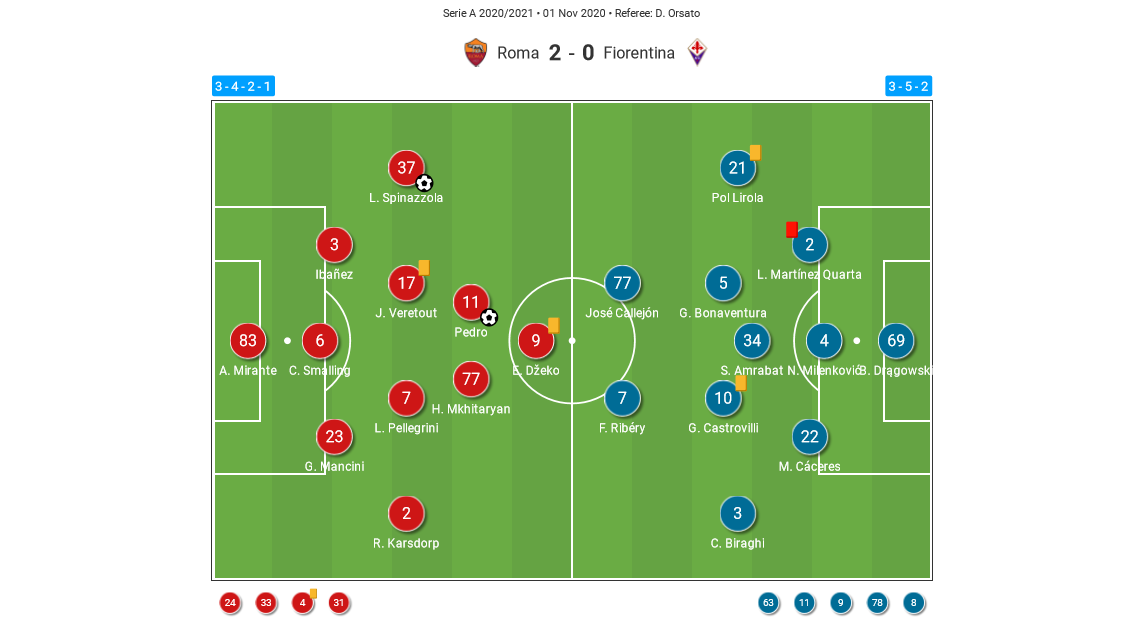 In this match, though Roma didn’t share the majority of possession, they were the team with the better performance in every phase of the game. They scored two goals, one of which was scored by their positional attack. Thus, in this section, we shall delve into their tactics in the positional attack.

With the 193cm tall player Džeko who dominates in the aerial duels, good runners like Pedro and Spinazzola, and the mobile midfielder Pellegrini who loves to run forwards from deep, Roma decided to play directly in this game. The aim was to exploit Džeko’s height to win the first ball and utilise the runners to run in behind, taking advantage of the second ball. To achieve this, Roma deployed a 3-4-3 or 3-4-2-1 system with Džeko in front to punish the huge distance amongst the three lines in defence of Fiorentina.

When they played out from the ball, the defenders would try to absorb pressure from the opposition, utilising square passes in the back to entice the press and move the opponent’s whole block forwards. This was to create more space behind the defensive line for runners to run onto. Fiorentina utilised a 3-2 pressing shape to press the 3-2 playing out shape. The three in the back would pass squarely to entice the player in the second line to press.

Also, the midfield-duo would try to drag the opposition midfielders to a higher position while the front players pinned the defensive line, creating more spaces between the defensive line and the midfield line for the second ball. Then, as the opponent moved forwards and pressed the ball, this was the trigger for the long ball to be sent to find Džeko for the first ball. In this case, a runner would exploit the space behind the defensive line while other front players or midfielders would stay close to Džeko in space to pick up the second ball. Ideally, an up-back-through pattern would be used to create a direct finishing opportunity for the runner.

As you can see from the above image, Roma’s defenders were passing square in the back, which successfully instigated the opposition to press. This was the trigger to hit long to find Džeko in front. On top of this, we could also spot the midfield-duo pinned the opposition midfield line forwards, creating more space between the lines.

Džeko then latched onto the ball and successfully got the first ball. On this occasion, Mkhitaryan occupied the space between lines which was created by the pinning of midfielders, and Spinazzola was the runner in this scenario to exploit the space behind the defence. Following this, Džeko picked Mkhitaryan, who later gave the penetrative pass in his second touch, sending the runner to finish. This was the direct up-back-through pattern, utilising the height of Džeko and mobile runners, though the above scenario ended with the offside of Spinazzola.

The directness of Roma had benefited them to score a goal in the first half. Apart from their direct approach, their mobile front players were also a crucial part when they tried to progress the ball from the back. As the ball moved towards the flank, they would drop to receive from the side-centre-back. Then they would link the ball to the wing-back in front who was higher than the pivots, and ran forwards to clear space for the pivots. The pivot could receive from wing-back facing forwards, utilising this angle in an opening.

In the above scenario, Pedro first dropped to receive from the right-centre-back Mancini and linked the ball to right-wing-back Karsdorp. After giving the ball to Karsdorp, Pedro immediately ran forwards to clear the space for Pellegrini to receive. Later Pellegrini received from the side, taking advantage of this receiving angle and facing forwards with his first touch to dictate the play.

As we have mentioned in the above section, Roma excelled in each aspect of the game, especially in positional attack and counterattack. Nevertheless, before dissecting Roma’s counter, we shall discuss Fiorentina’s offensive issue first, which leads to the advantage of Roma in defending and offensive transition.

Firstly, we shall take a glance at Fiorentina’s offensive structure and tactics. Their system was 3-5-2, also three in the back. When they played out from the back, their wing-backs wouldn’t position very high and the ball would usually be delivered to their feet. This was to instigate Roma’s wing-back to step up and press, and the space behind them on the flank/ half-space would be exposed if the centre-backs didn’t move across fast enough to cover.

From the above image, we could see that the right-wing-back Lirola originally had the ball in a deep position. Then Roma’s left-wing-back Spinazzola was enticed to press Lirola, leaving space behind. In this scenario, the left-centre-back Ibañez didn’t move close to cover Spinazzola and an opening was created. Dusan Vlahović then moved to the opening and received. He then held the ball there and waited for the pivots to join the play, later releasing the ball to the pivot.

This approach was effective only for a few times. It was neutralised by Roma’s reactive pressing trap and the excellent individual performance of Roma’s defenders which will be discussed later.

Furthermore, the distance between three lines of Fiorentina was huge in the positional attack. Thus, from the attacking perspective, the support from other lines was not enough and it might put the ball-carrier into a difficult situation. On top of this, the huge distance would decrease the probability for Fiorentina to get the second ball. But these disadvantages are not as deadly as how the huge distance in attack hurt them in defensive transition. When Roma recovered the ball, their front players could easily get the ball in gaps to face forwards and progress the ball.

Above is a manifestation of Fiorentina’s defensive transition. They lost possession in this instance in the midfield area. You could observe that their distances amongst lines were huge and players from different lines couldn’t support in defending. Most importantly, Roma could easily find free players who had the positional superiority to progress the play due to the huge opening.

Apart from the team levels issue, from the individual perspective, Fiorentina had started some players that were not in form. For instance, Bonaventura played for 56 minutes and had 7 losses in his own half, the worst in the team. Due to his losses of possession, Roma could easily launch counters in the advanced area.

As we’ve shed light on Fiorentina’s offensive issue, we can now delve into how Roma made use of it and converted it into counterattacking chances.

As you can see from above, Fiorentina tried to instigate Roma’s left-wing-back to press, creating space behind the left-wing-back. The striker, Vlahović in this case, moved to the flank to receive and ready to exploit the space. Nevertheless, he was tightly tracked by left-centre-back Ibañez and was prevented from turning. Later, Roma’s dropping player challenged the ball and recovered possession, launching the counter.

After recovering the ball from the trap/ Fiorentina’s individual mistake, Roma would launch the counter immediately. In this case, the striker Džeko, who is also good at dropping to link the play, would drop and move towards the ball to receive. He would position himself between lines, exploiting the huge gaps that were caused by Fiorentina’s offensive spacing that we’ve mentioned before. He would easily turn to face forwards without pressure as the opponents were too far to exert pressure. This then would activate runs from the front players to attack the space behind defence, also a run from the mobile Pellegrini from deep to serve as another final pass option for Džeko.

Following the above example of recovering the ball on the left flank, Džeko dropped and was picked in the next action. He could easily turn as the opponents were too far away. As he faced forwards, this triggered Carles Pérez to run diagonally to the left to provide a final pass option, also creating space for Pellegrini. Pellegrini ran from deep diagonally in a reverse way to Pérez, also providing a final pass option to Džeko. Džeko then tried to pick Pellegrini but was intercepted. However, a counter like this in the second half, which initiated by Džeko, created the second goal.

Roma didn’t win without reason. With each player utilising his strength, the whole team’s performance was brought to a high level. We shall expect to see players like Pellegrini to bring Roma to more victories in the future.