Union Berlin arrived at the Rhein-Neckar-Arena to take on Hoffenheim in the final match of matchday six in the Bundesliga on Monday. Hoffenheim likely knew that Union would come in and attempt to frustrate Hoffenheim with their compact defensive structure. Sure enough, that’s what played out over the course of 90 minutes, with Union’s efforts supported by a Robert Skov red card. Union Berlin was able to take all three points as they defeated Hoffenheim 3-1.

This tactical analysis will examine the tactics used by both Sebastian Hoeneß and Urs Fischer. The analysis will look at Union Berlin’s build-up, Hoffenheim’s attempt to overload the right half-space, and Union’s gameplan after Skov’s red card. 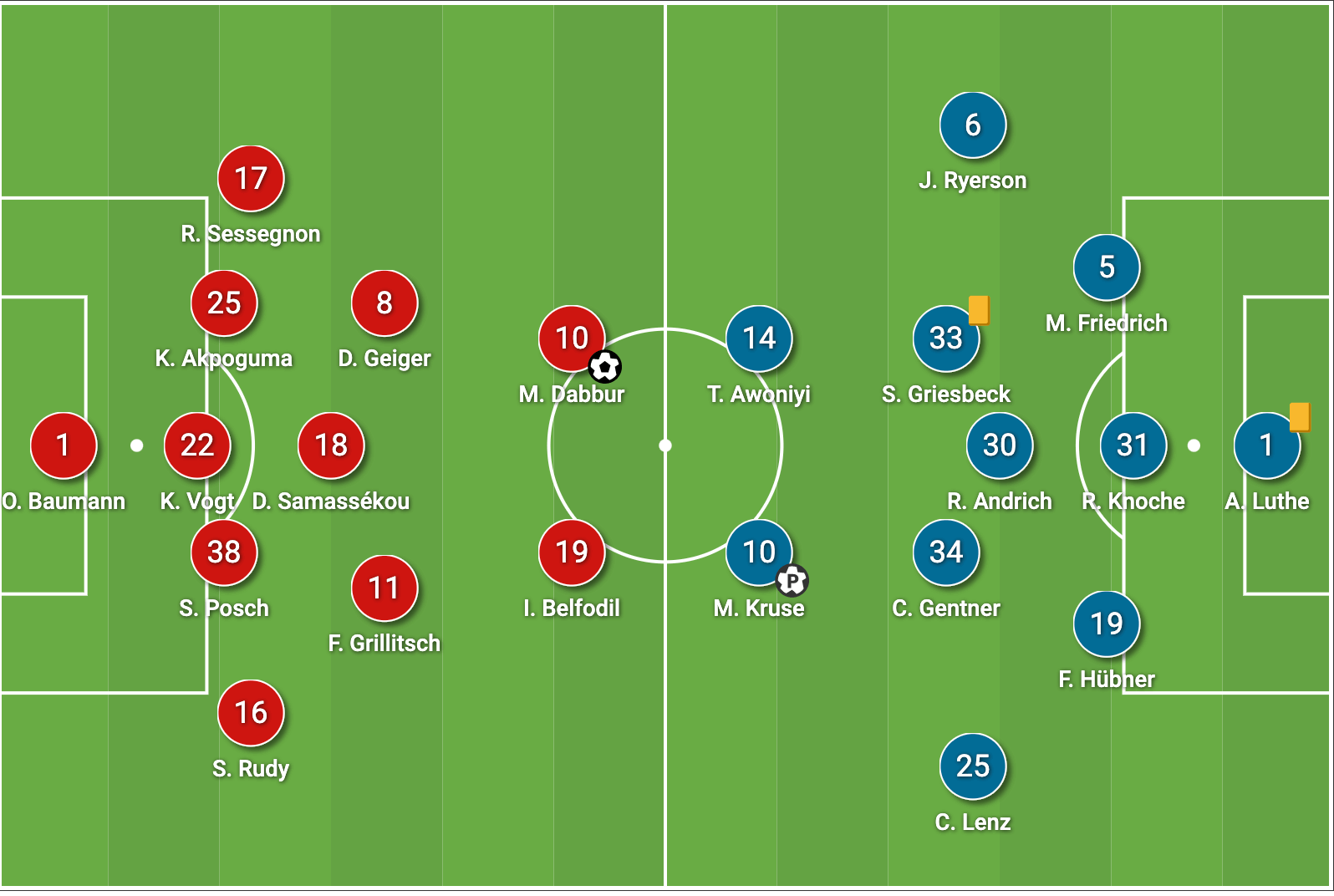 While the image represents a 5-3-2 structure, Sebastian Hoeneß’s Hoffenheim squad played more in a 3-1-4-2 with Oliver Baumann in goal. The three centre-backs were Kevin Akpoguma, Kevin Vogt, and Stefan Posch. Ryan Sessegnon started as the left wingback while Sebastian Rudy started on the right. Their central midfielders were Diadie Samassekou, Dennis Geiger, and Florian Grillitsch, with Samassekou playing as the holding midfielder. Mu’nas Dabbur and Ishak Belfodil were the two starting strikers for the evening.

Union Berlin used a 3-4-1-2 as their structure with Andreas Luthe as their starting goalkeeper. Their three centre-backs were Florian Hübner, Robin Knoche, and Marvin Friedrich. In front of the back three was Robert Andrich, who supported Sebastian Griesbeck and Christian Gentner in the centre of the park. Christopher Lenz patrolled the left flank while Julian Ryerson worked on the right. Max Kruse and Liverpool-loanee Taiwo Awoniyi started as the two strikers.

Union’s compact defence was certainly not surprising for Hoffenheim. What likely caught them off guard was Union’s ability to progress the ball through Hoffenheim’s press. Some initial success in Union’s build-up was followed by an individual error that Dabbur should have taken better advantage of. Union allowed themselves to get into the match a bit before going back to their build-up, which saw them progress down the wings. Union did well to create space from themselves, manipulating Hoffenheim’s press in the process. 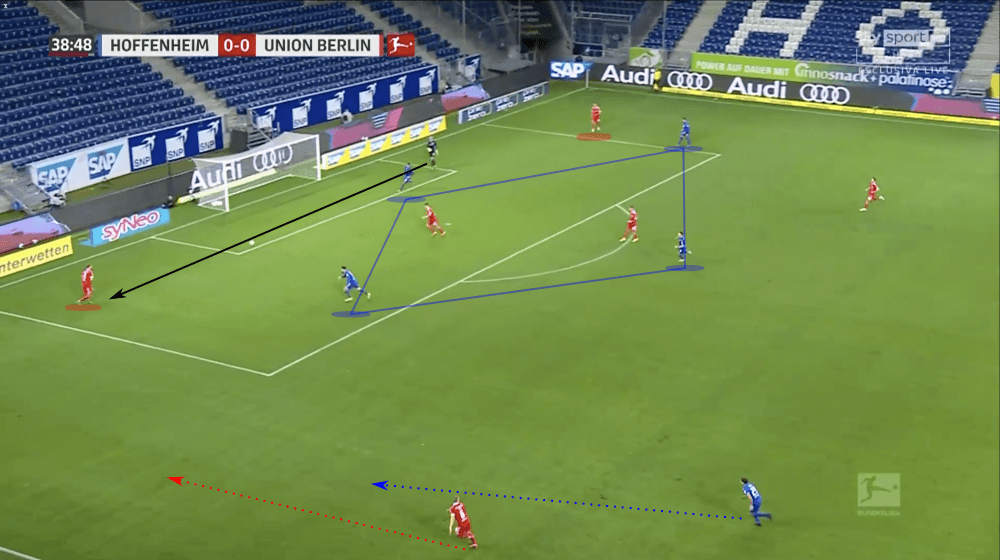 In the image above, Union’s wide centre-backs are highlighted in red. As the ball moved from their left side to the right, Hoffenheim’s pressing structure became stretched out as a result of the wide positioning of the centre-backs. Union also recognised that Hoffenheim was attempting to prevent interior passes, and so they looked to build down the wings. As the ball traveled, Ryerson, the right-wingback, dropped down towards the ball. In the image, he’s checking his shoulder to make sure that he was being followed by the defender. 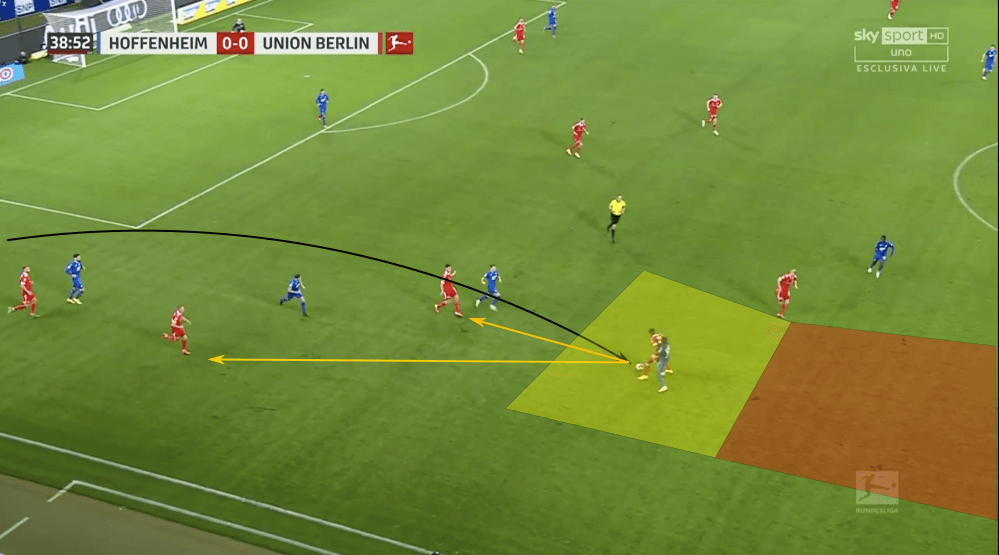 Ryerson’s movement created space for Awoniyi to drop down and receive the ball with plenty of room.  The striker did just that, attracting pressure as the ball came under control. As a result of this movement, Awoniyi had opened up a large amount of space (marked in red) behind him to be exploited. The other important thing to note with this aerial pass that was played to Awoniyi was that he was well-supported by his teammates. His two passing options means that he can hold up play and lay it off before Union get forward, although in this instance he drew a foul.

Later in the match, Union continued to build out from the back, inviting the pressure and playing through it down the wings. This time, they used a couple of ‘up-back-through’ passes in order to move the ball quickly through Hoffenheim. The move started again with a wide centre-back drawing pressure. 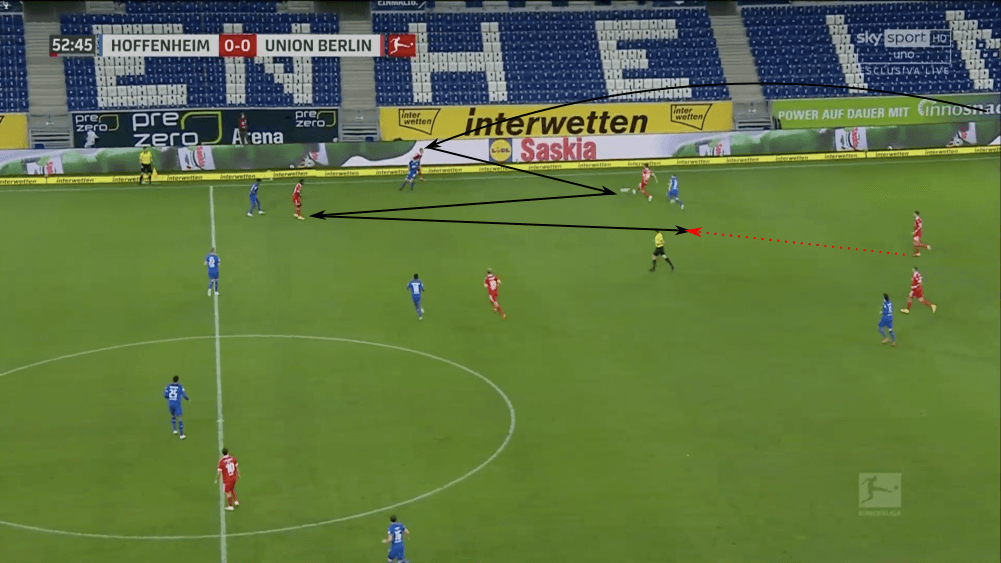 This time though, Ryerson didn’t check towards Freidrich, the right centre-back. Instead, he moved up the pitch and was the recipient of the aerial pass. As the ball came to him, he used his first touch to drop it to Gentner, who quickly played the ball to Awoniyi. These quick, successive passes were enough to start to disorganise the Hoffenheim defensive structure. As Awoniyi laid the ball off to Knoche, space had already opened up. 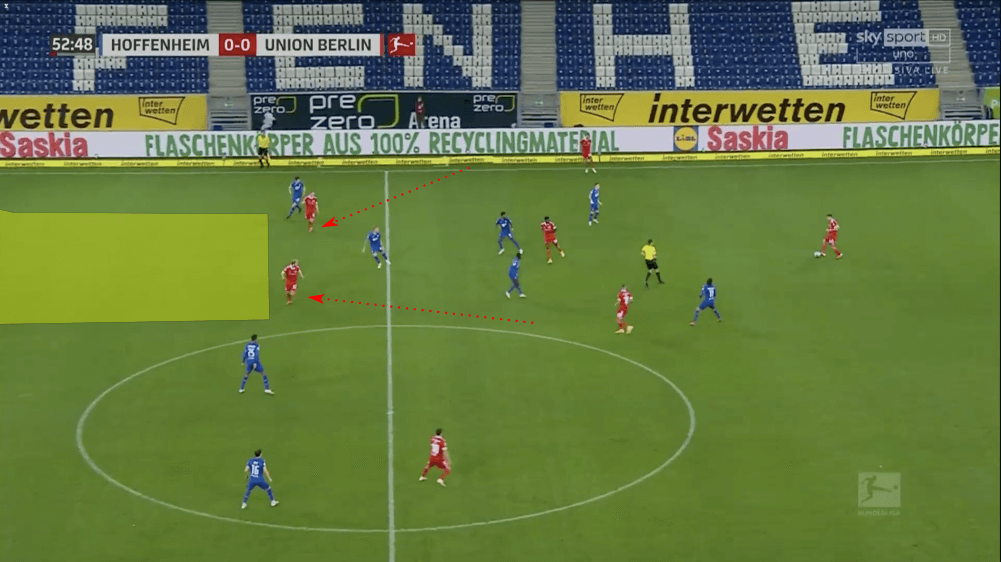 As Knoche received the ball, the Hoffenheim back line was disconnected. This allowed runs from both Griesbeck and Ryerson to go mostly unnoticed by the opponents. They occupied space that had been vacated by Vogt, who had mistakenly been ball-watching. Unfortunately for Union, Knoche was unable to recognise how much room was available, and he instead played a horizontal pass to a teammate. While that decision wasn’t ideal at the time, it was only a couple minutes before the moment that changed the match for Union. 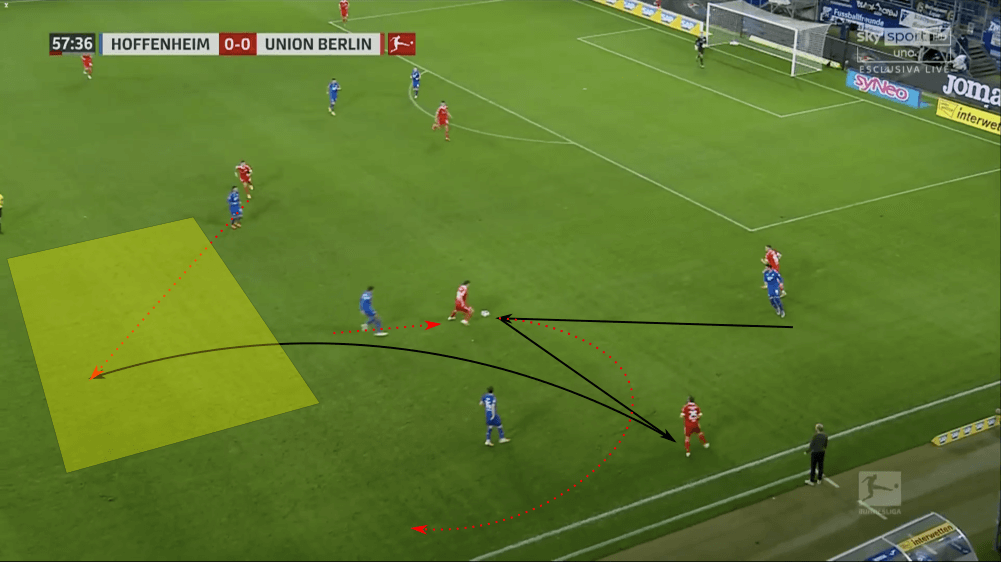 As they looked to build up down the left side, they again used their wide centre-backs to stretch Hoffenheim’s press. Max Kruse’s movement here made all the difference: he dragged his defender towards Union’s goal before laying the ball off. This created more space in behind him, and Andrich was able to have enough room to control the aerial pass that was played. Union quickly got forward on the right side with Andrich laying the ball off to Kruse, who rifled a pass to Awoniyi. As evident above, Hoffenheim had six players forward; this meant Union could exploit the space in behind. They ultimately got the ball in the box, drawing the tackle by Skov from behind in the process, earning themselves a penalty and the first goal of the match.

Hoffenheim started the match quite well, seeing most of the possession and attacking fairly consistently. They had multiple opportunities to capitalise on this, but their inability to do so cost them the opportunity to force Union’s hand. In the second half, Hoffenheim was unable to conjure up the same effectiveness in possession, ultimately forced to overcome too much as Skov’s red card came just 13 minutes into the half.

A lot of the attacking down the right side would start when Hoffenheim would switch possession of the ball from the left side of the pitch. They relied on their right centre-back to be able to dribble and attempt to engage Union’s midfielders, creating more space behind the player. 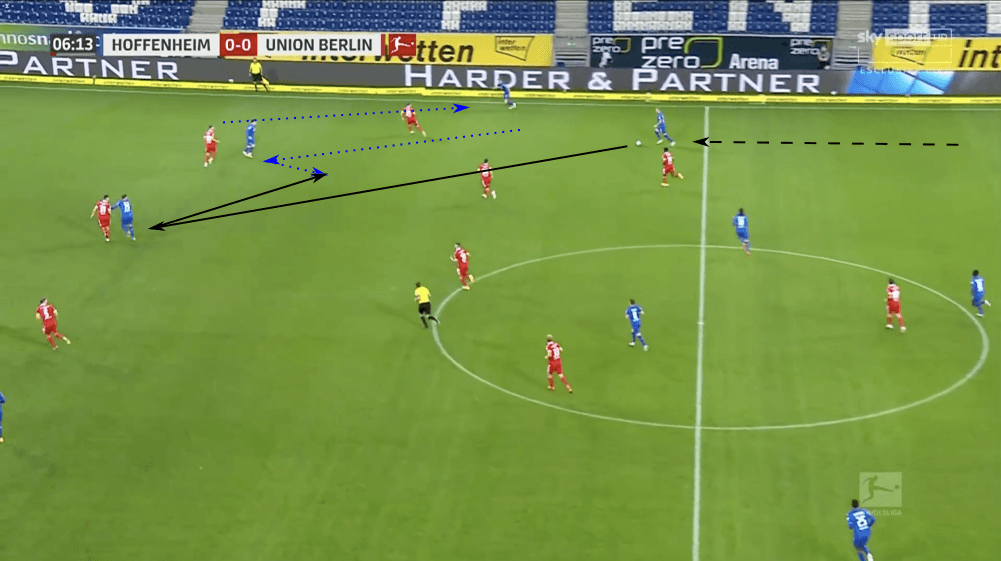 An initial image of this is shown above. Vogt received the ball and dribbled down the right half-space. As he dribbled, Sebastian Rudy moved inside, a trend which will become quite apparent in a few more paragraphs. As Rudy went inside, Posch, who was initially located on Union’s final line of defence, shifted down, rotating with Rudy to ensure the squad was balanced on the right flank. As the ball went into Ishak Belfodil’s feet, Rudy peeled off of his man and dropped into the corridor between the two defensive lines. This allowed him to receive in space as his defender was slow to react to his movement. Rudy was unable to progress the ball and was eventually closed down, but the idea was still there. 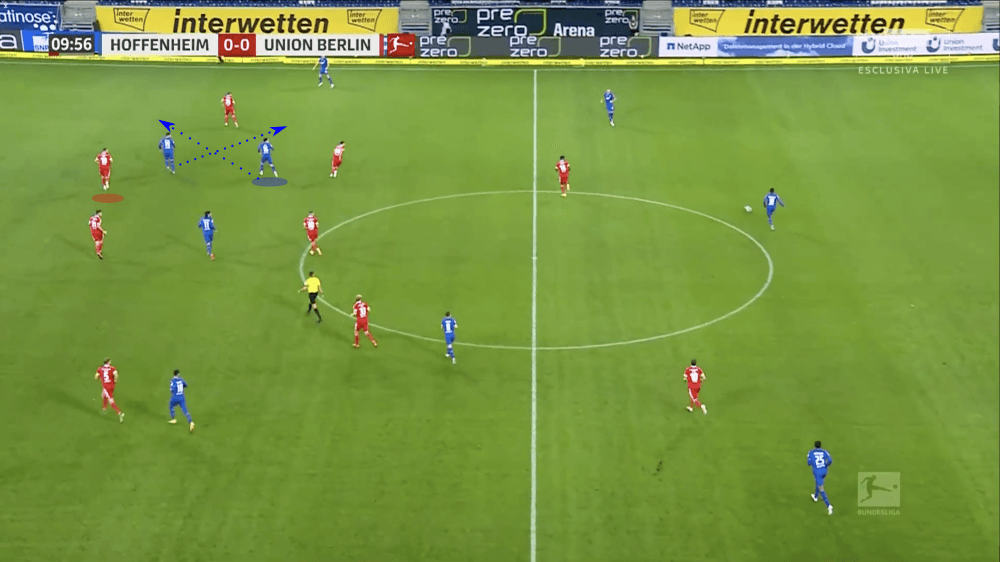 Minutes later and again Hoffenheim looked to target the right half-space. This is similar to what they tried to achieve last week against Werder Bremen. By attempting to overwhelm the left centre-back, Hoffenheim looked to force Florian Hübner into a quick decision that they’d hoped he’d get wrong. This time, Rudy (marked in blue) started off in the half-space. By vacating his position on the wing and coming inside, he had created space for Posch to push forward and drag the defender with him. This allowed Vogt to dribble higher up the pitch, creating an advantage for Hoffenheim. In the image above, Rudy and Belfodil move in opposite directions. This coordinated movement was an attempt to freeze Hübner, who made the right decision to follow Rudy. That being said, if Belfodil had received the ball, he would have had plenty of time to turn and attack the back line of Union Berlin. 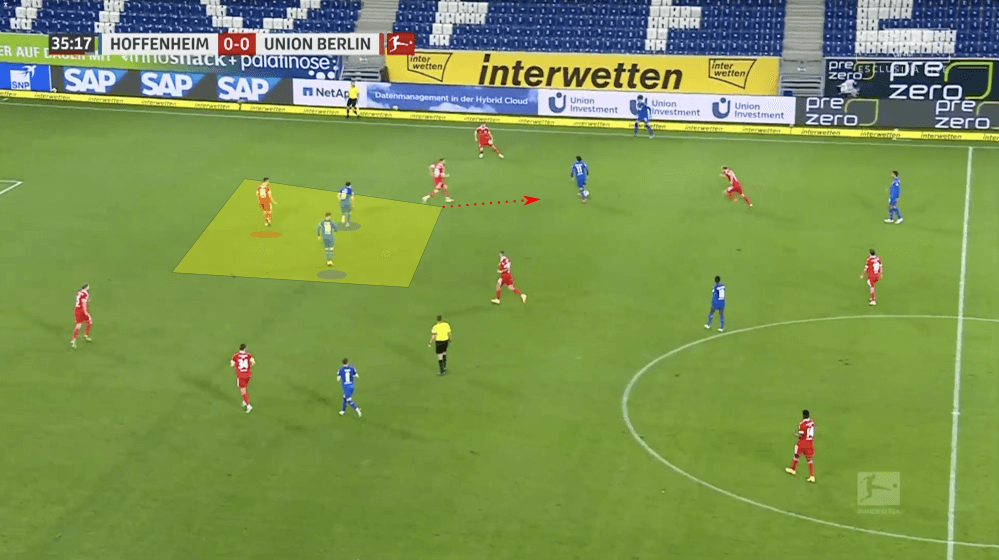 One of their best opportunities to exploit the right half-space came when Rudy and Florian Grillitsch drifted over to the right side. Rudy and Dabbur, both marked in blue, created a 2v1 against Knoche. They were able to do this just as Grillitsch was receiving the pass between the lines, unmarked initially but being closed down by Hübner. There was plenty of room available for the two Hoffenheim players to run into, but Grillitsch received the pass with a less-than-ideal body shape. Because he was facing his sideline, he was unable to see the clear overload his teammates had created, and Hoffenheim was unable to take advantage of it.

Hoffenheim would rue their inability to do so later in the match when Skov picked up a red card for a foul from behind in the box. The ensuing penalty put Union ahead and allowed them to shift their game plan in the process. Union, already putting in a solid defensive performance, became even more compact and looked to force Hoffenheim to commit men forward so that they could hit them on the counter. This change in tactics did the trick as they were able to frustrate the home team in possession. 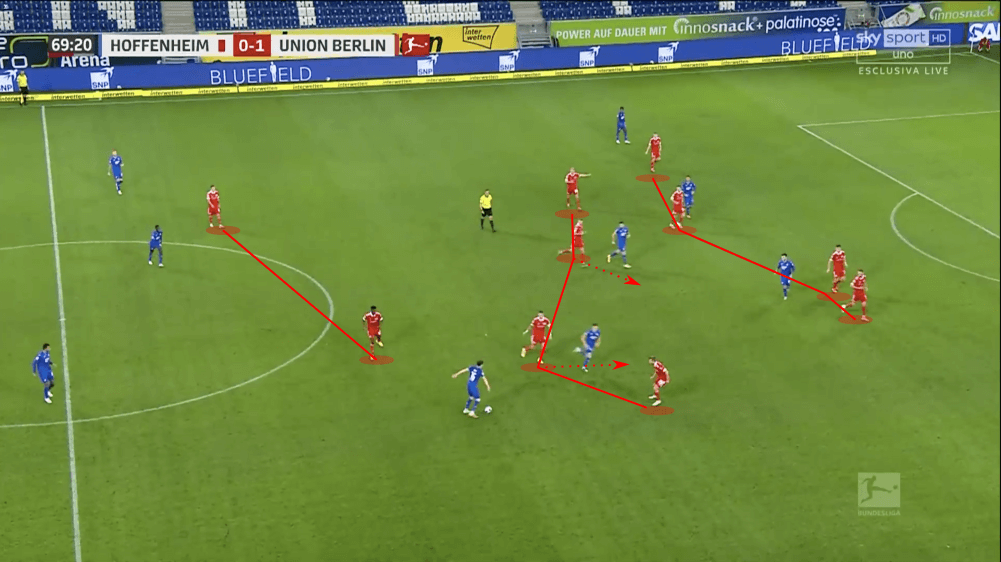 Union’s compact 4-4-2 looked to frustrate Hoffenheim as it occupied the centre of the pitch and forced Hoffenheim wide. The two central midfielders in this formation were allowed to follow runners if necessary, meaning that the structure would move from a 4-4-2 to a 5-3-2 if necessary. While this left some space in the middle, Hoffenheim, being down a man, would need to commit another defender forward if they wanted to be able to make use of it. 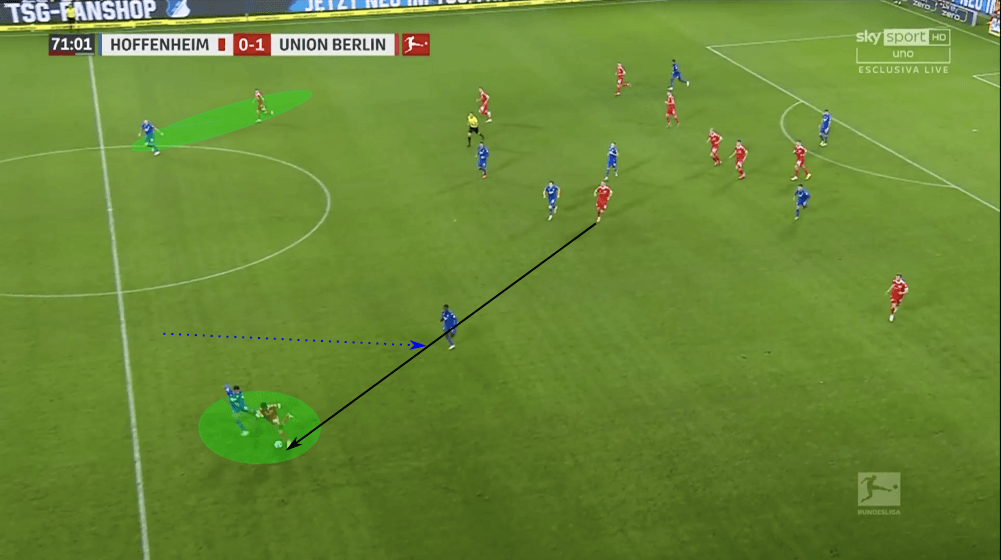 When Hoffenheim began to commit men forward, Union was able to keep their forwards higher, maintaining their defensive advantage by remaining compact. In the image above, Hoffenheim had sent men forward in an attempt to establish some superiority. Union remained compact, as is clear with seven of the ten outfield players in the centre of the pitch. When they won the ball, they looked to counter quickly. This pass to Awoniyi got past Diadie Samassekou, who was trying to prevent counter-attacks as he also supported possession. With this one pass, Union had two 1v1s created and could look to get forward and hit Hoffenheim on the counter. 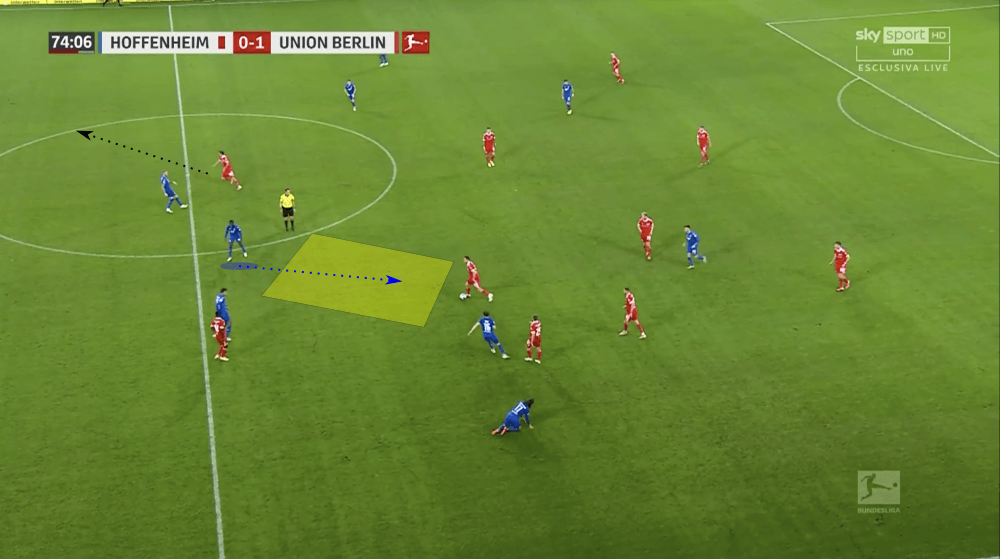 When Union was able to win possession in their own half, they were again dangerous because of the numerical advantage. In the image above, Samassekou had allowed for too much space to open up as he looked to maintain a numerical advantage on the back line. However, when Union won possession of the ball, Samassekou was the man who had to provide the pressure. This meant that by the time he had closed down Gentner, Gentner had already picked out a pass for Kruse, who did well to create space between himself and the defender. While Kruse’s shot was ultimately saved, Union’s ability to threaten the space behind caused a lot of problems for Hoffenheim.

While Hoffenheim started out strong, they were never able to capitalise on their chances. Union Berlin, on the other hand, did just that and was able to come away with a well-deserved victory. Union find themselves in eighth place and will take on newly-promoted side Arminia Bielefeld on Saturday. Hoffenheim host Liberec on Thursday before traveling to take on Wolfsburg on Saturday. While that promises to be an interesting match, many eyes will be on table-leaders Bayern Munich as they take on Borussia Dortmund on Saturday with both teams at 15 points.