Last Sunday witnessed a very entertaining game between Manchester City Women and Everton Women who were both battling for the 2019/20 FA Cup title at the glorious Wembley stadium. The match ended with a deserved 3-1 win for Manchester City after going to extra-time since Everton did their best to prevent the Citizens from getting their second goal in regular time.

This tactical analysis article will look at how Manchester City were able to beat Everton and score the three goals which enabled them to win the trophy while at the same time carrying out an analysis on Everton’s tactics and what lacked this team to beat Manchester City, knowing that the same team is currently doing very well in FAWSL and ranking second in the league just behind Arsenal.

Manchester City lined-up according to a 4-3-3 formation that included Ellie Roebuck as a goalkeeper, Demi Stokes as a left-back, Steph Houghton and Alex Greenwood as centre-backs and Lucy Bronze as a right-back.

For Everton, the team also started this game according to a 4-3-3 formation with Sandy MacIver as a goalkeeper, and in front of her Ingrid Moe Wold as a right-back, Danielle Turner as a left-back while both Rikke Sevecke and Megan Finnigan played as centre-backs.

In midfield, Damaris Egurrola, Izzy Christiansen and Lucy Graham were the team’s central midfielders while in attack, Hayley Raso and Nicoline Sørensen were employed on the wings to provide Valérie Gauvin, the team’s striker, with passes and crosses.

Manchester City started this game with a clear determination to score. And this was apparent from their various scoring attempts which were emanating mostly from the wings. And this was partly thanks to Stokes and Bronze’s performances because these two full-backs contributed a lot to the attacking phase of the team.

And they often created numerical superiority by either passing to a teammate on the wing and then running to provide passing options or by accelerating and creating space for themselves on the wings.

In addition to that, both players acted like attacking midfielders at many instances and created space for Manchester City’s actual midfielders and wingers to move in the space behind them. You can see in this example for instance how Stokes was positioned as if she was an advanced playmaker and gave a lot of passes mainly to Lavelle, Kelly, Weir, and Mewis. 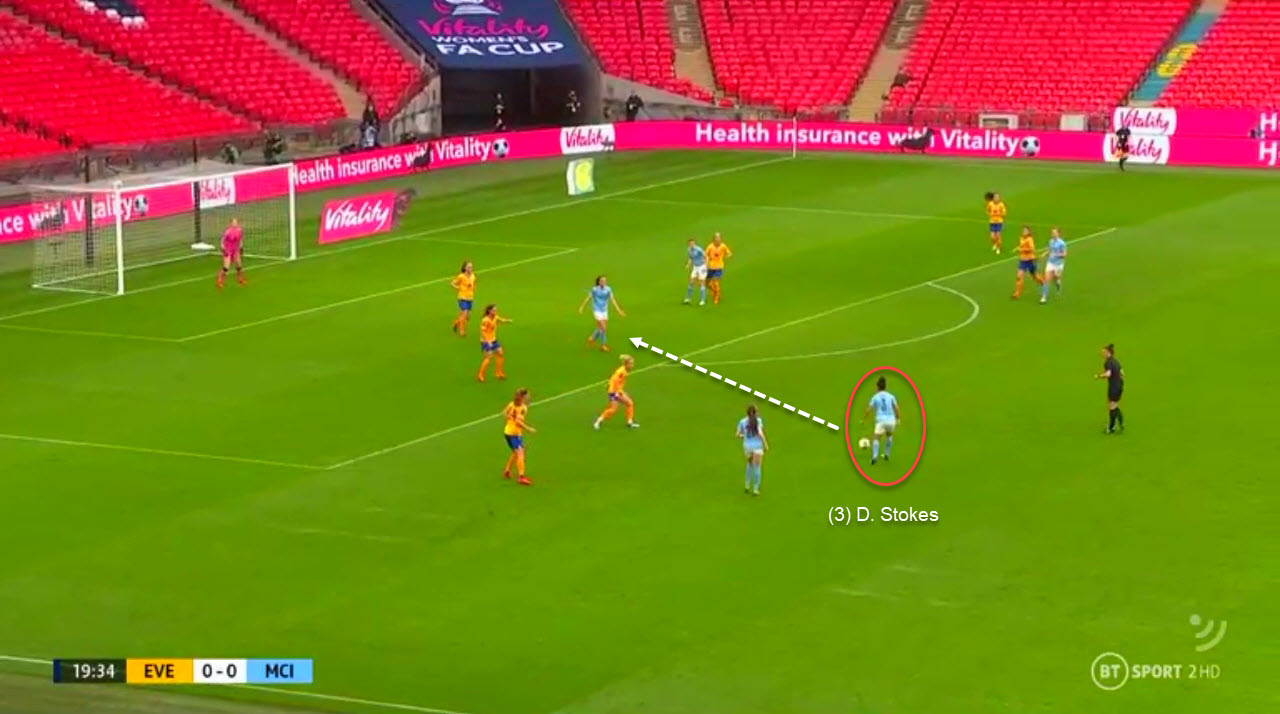 The same applies to Bronze since who put in an excellent and generous performance this time compared to her start of the season. She did contribute so often to the attack not only from the right-wing but also by cutting inside or entering midfield to create more space for the others and have more passing options as you can see in this example. 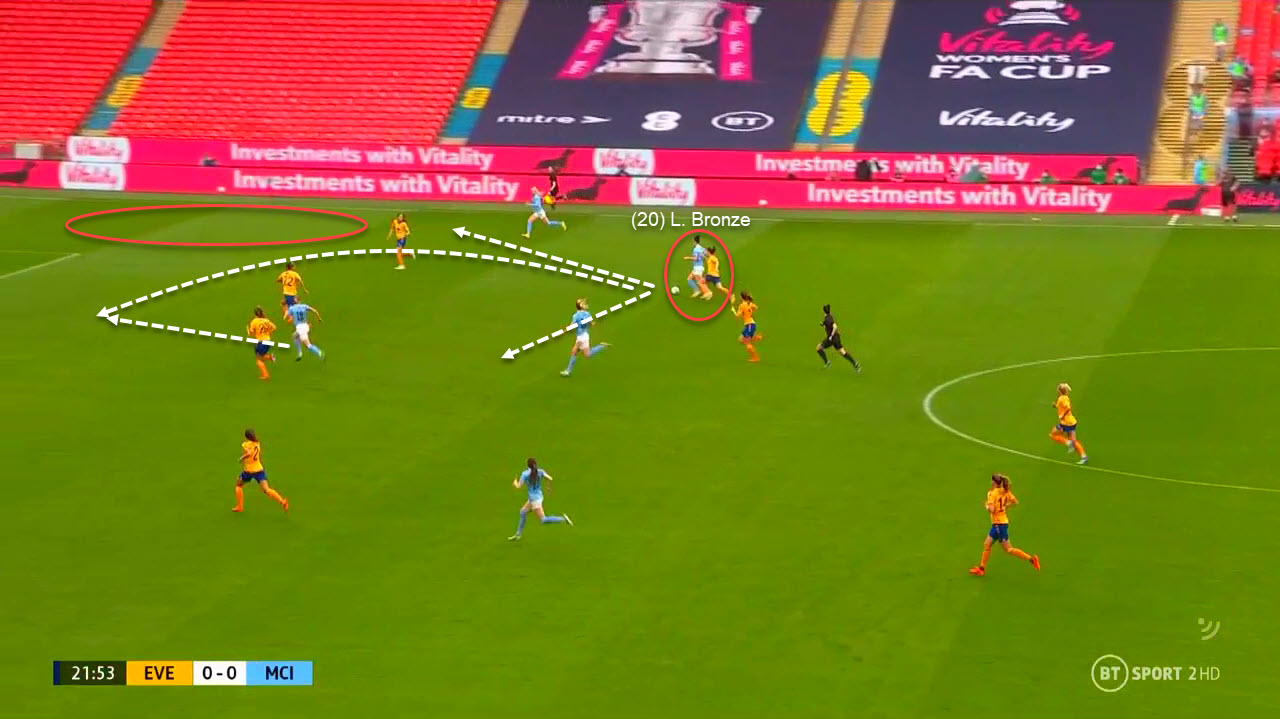 On the defensive side, it is needed to say that both Rose Lavelle and Chloe Kelly contributed a lot in supporting Bronze and Stokes when Everton attacked with numbers. And this support was crucial in reducing the number of crosses to Gauvin, which was one of the most used weapons of Everton.

As you can see here, Lavelle went back to defend with Stokes and tried to prevent her opponent from crossing but was a second late. Also, Houghton and Greenwood did well in marking Gauvin and disturbing her, especially in the air to prevent her from making accurate headers, even though at times Gauvin was faster than Manchester City defenders. And the only clear mistake they did was during the sole Everton goal in which they let Gauvin score without anticipating the cross. 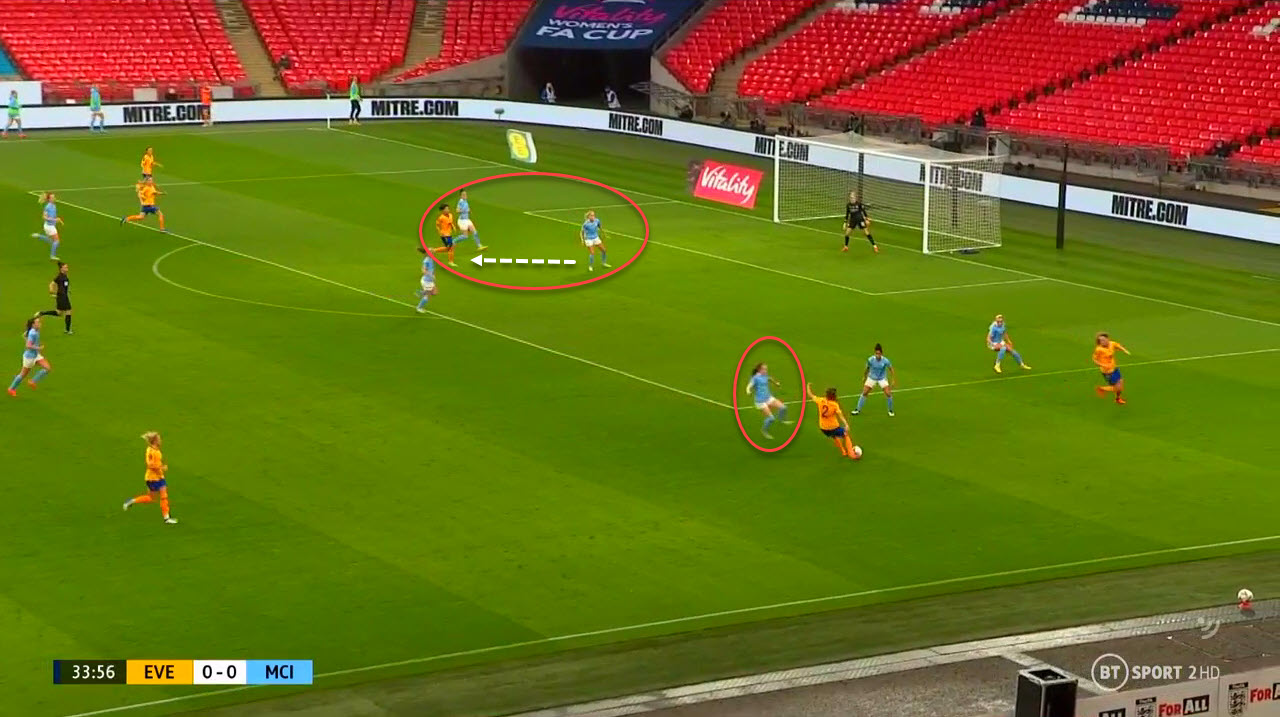 Lavelle was not only effective in supporting in defence but also through her creativity. In other words, Lavelle had a sort of dynamism and agility that helped her to unlock Everton’s midfield with ease and in the blink of an eye. By moving a lot between the lines to receive the ball, she made sure that she escapes marking, and when she receives the ball in midfield, she often starts dribbling and accelerating after controlling the ball with one or two touches maximum most of the time.

These solo efforts allowed her to eliminate three Everton players with only two touches in the following action before she was left with the possibility of passing a through ball to White who was running behind the defensive line as you can see here. 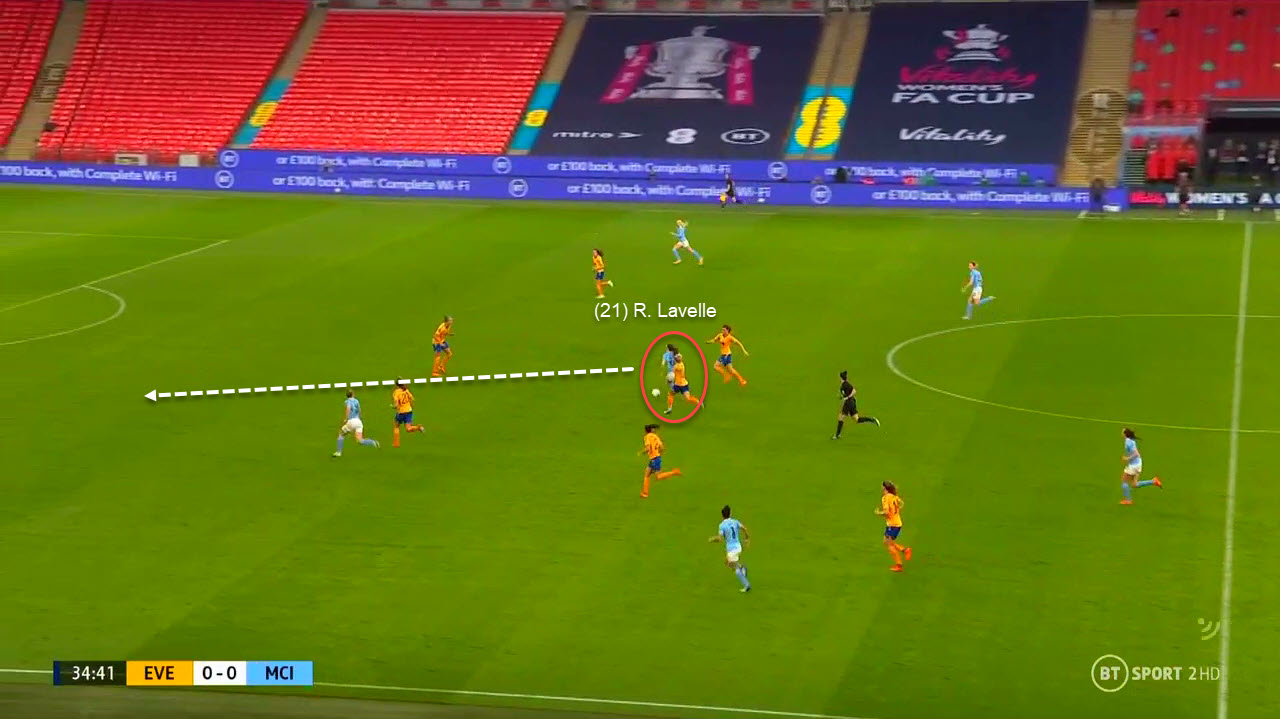 Following their first goal, Manchester City did not retreat and this was the right mentality to play the game with during this sort of games. Moreover, midfielders helped a lot in giving options in attack and most of the time Mewis and Weir were the ones who supported the attacks while Walsh had the covering duties. In this regard, it was interesting to focus on how Weir moved when the ball reached Lavelle, White or Kelly.

When this happened, Weir read the situation intelligently and often went quickly to occupy the free space behind the defenders who were looking to regain the possession of the ball. And as you can see in this example, Manchester City exploited this kind of situation and attacking players passed to Mewis-Weir when asked for the ball in advanced positions. Lavelle in this example received the ball and noticed the space behind defenders and the movement of Weir towards it and therefore gave her a through ball that allowed her to face only the goalkeeper and then Weir hit the post. 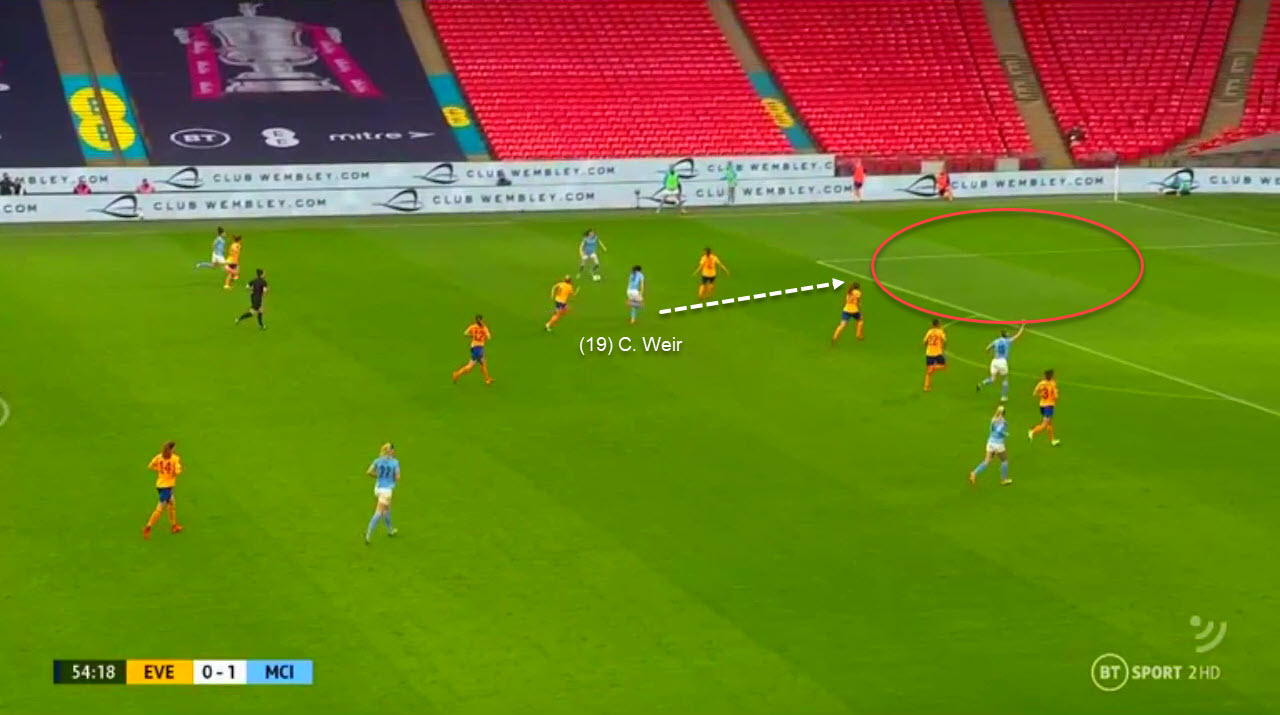 Also, during the extra-time, Jess Park, despite her young age, was able to play a decisive pass behind the defence after she saw Georgia Stanway’s movement towards that space. And this enabled her to be in a 1 vs 1 situation with Everton’s goalkeeper, and the rest was a goal. 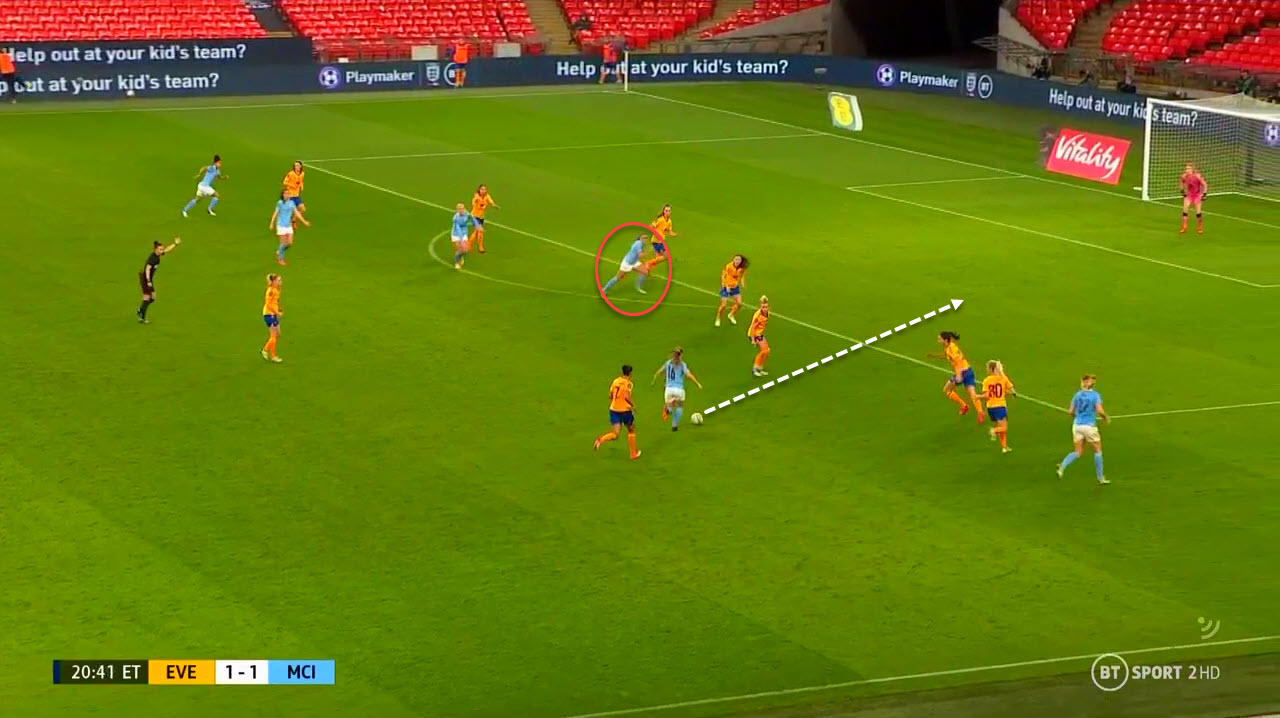 A solid but not sufficient Everton performance

Everton’s performance was not an average one. The team’s players can be proud of their performance since they caused a lot of troubles to the Manchester City side. However, their efforts were not enough to win the trophy. The team mainly relied on Gauvin’s strength in aerial duels and in finishing in general and tried to provide her with passes and crosses so often.

And this was rewarded by a goal and a clear scoring opportunity which Gauvin missed by so little. You can see in the following action how Sørensen here crosses the ball as soon as she receives it in an attempt to make it reach Gauvin, which actually happened thanks to the latter’s anticipation of her direct marker’s disturbance which allowed her to win seconds over her and shoot the ball. 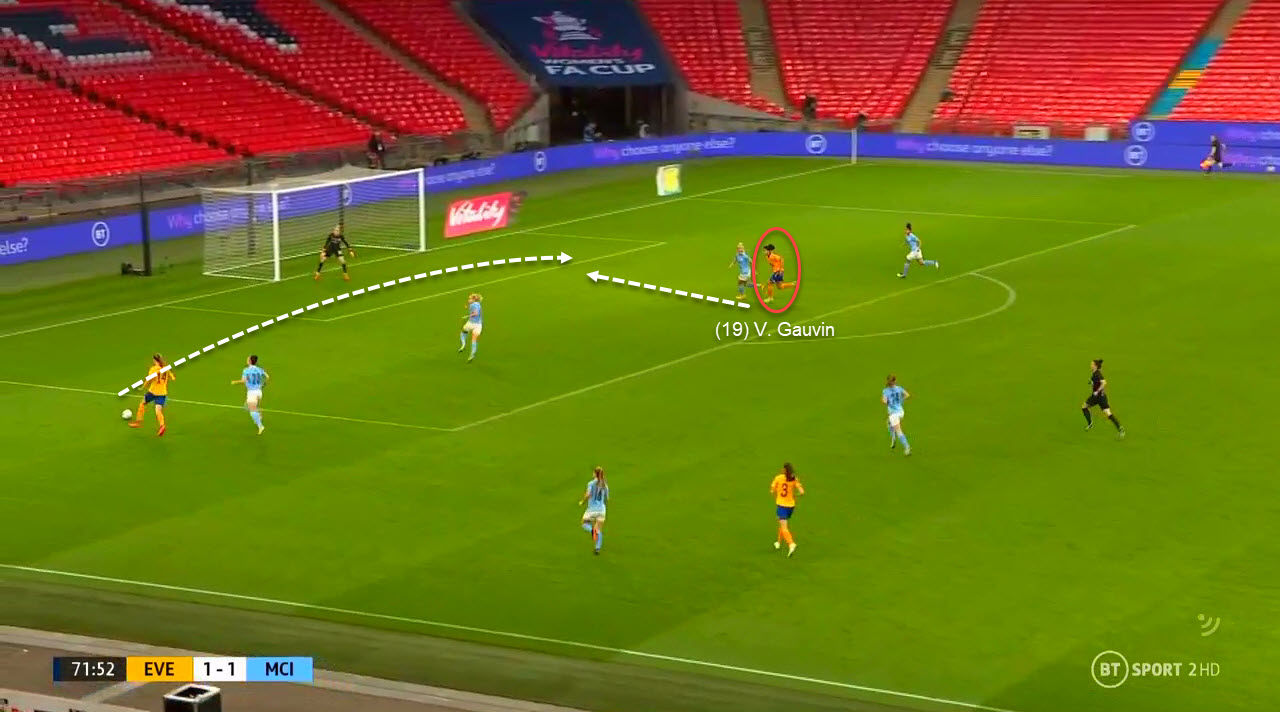 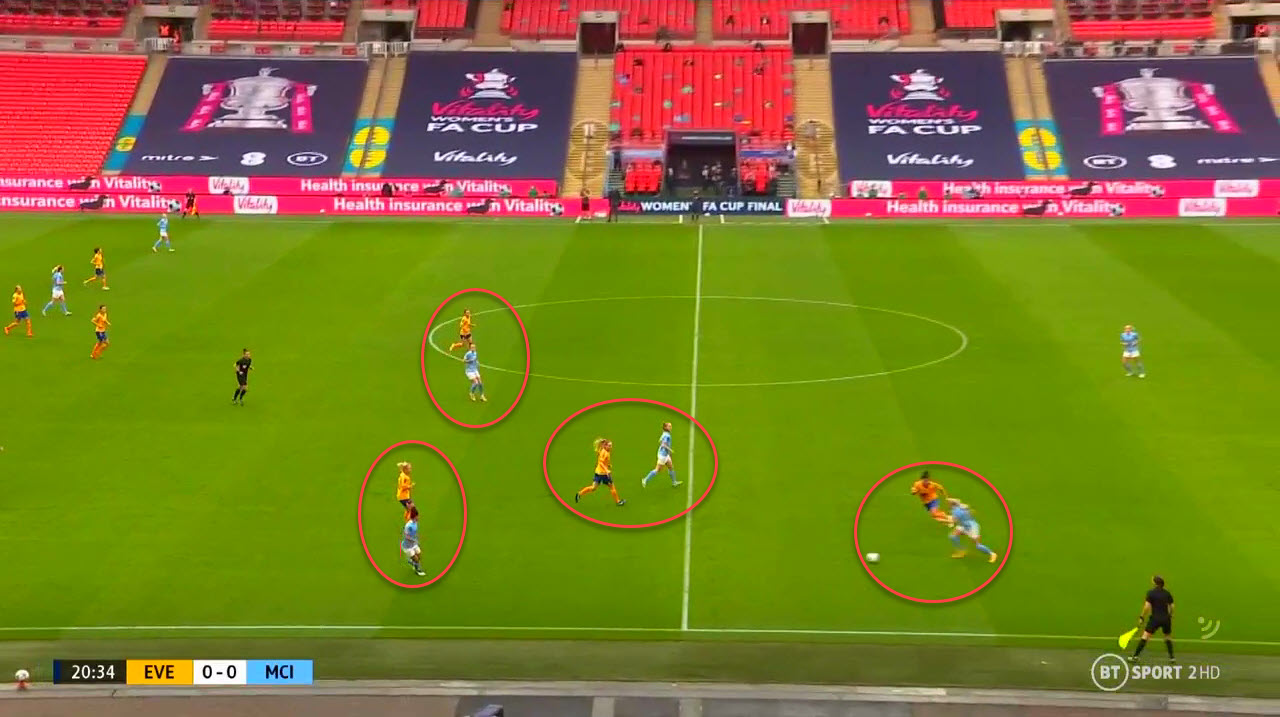 Despite Manchester City’s great form and their goalkeeper Ellie Roebuck’s excellent performance, what really lacked Everton in this match in the attack was taking the right passing choices in the final third and playing intelligently and without hurry. Everton could have had more scoring chances if they did not precipitate in passing especially when they were in positions and situations that could have created a lot of threat to Manchester City’s defence.

You can see in this example for instance how Graham was in a dangerous position that allowed her to do whatever she wanted by either dribbling and passing to Gauvin in free space or protecting the ball and running forward with it to win a free-kick. But she failed to do so since she wanted to pass the ball quickly and it ended up at the feet of Greenwood. 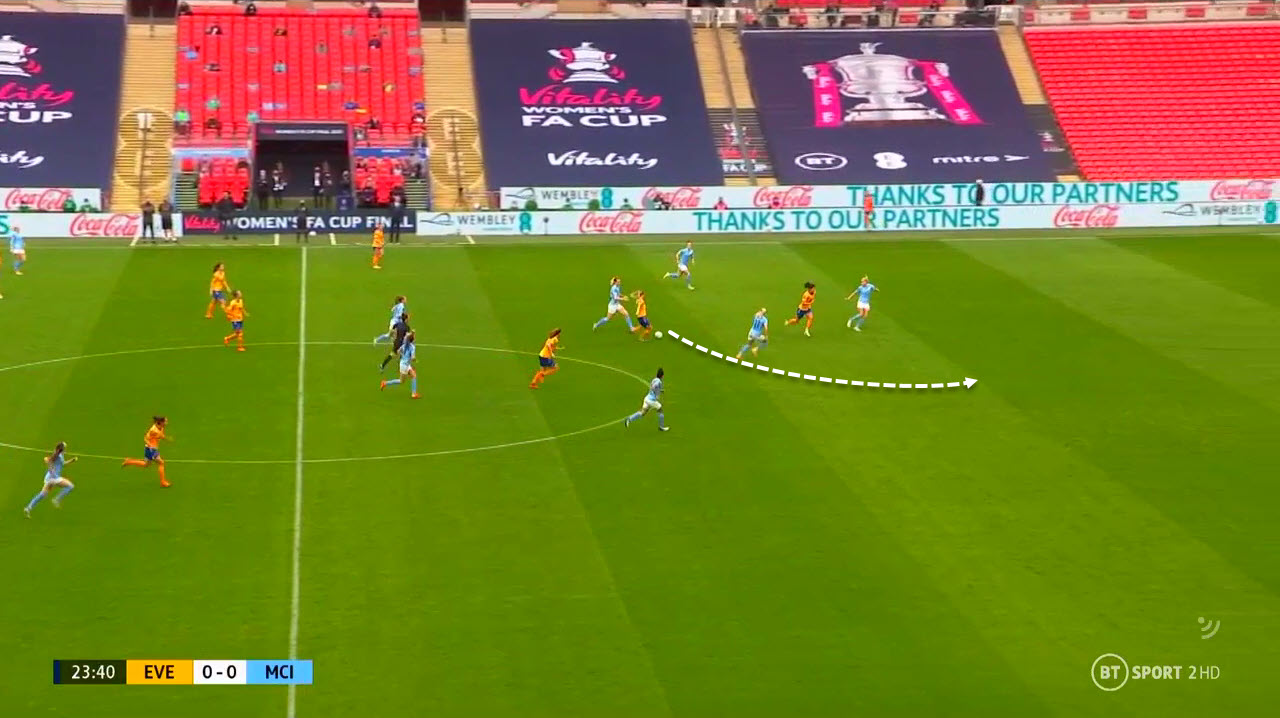 This title will surely boost Manchester City’s morale and make the team become more confident to win more matches in the FAWSL since a lot of wins are needed for them to climb the standings. And if they continue with the same mentality and playing style, these wins will surely come for the team.

For Everton, this loss should not hamper the team’s excellent league performances and should only give the players more determination to battle against all English teams and why not win in the remaining matches.