Cote d’Ivoire has produced plenty of fantastic wingers over the past few years, including the likes of former Arsenal player Gervinho, and current star of the EPL Wilfred Zaha. Another one appears to be emerging in the Belgian Pro League. Konan N’Dri of KAS Eupen is only 20 years old, but he is currently having a breakthrough season for the club.

While still unknown for most, it won’t be long before more clubs become interested in this young Ivorian prospect. However, he certainly is still a prospect, with plenty of areas to improve upon in his game. This tactical analysis, in the form of a scout report, will look at the strengths and weaknesses of the young winger’s game. This analysis will look at how N’Dri is shaping up in both the attacking and defensive areas of the game.

Where N’Dri excels as a footballer is in his dribbling. At around 173cm tall, N’Dri has a low centre of gravity which allows him to get past full-backs and other defenders. In terms of league-wide data, he is top of the dribbling charts with the departure of Jeremy Doku from Anderlecht. With 10.73 dribbles per 90, at an average success percentage of 58%, it is clear that N’Dri is a strong runner with the football. In fact, when we look at the below chart, we see that his success rate was better than that of Doku, a player who has been capped for Belgium and is considered a future star. 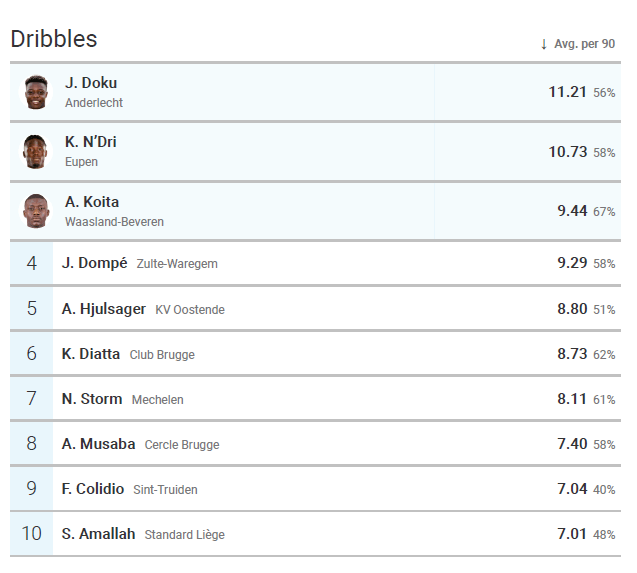 What helps N’Dri is his ability to use both feet. This allows him to be deployed on either the left or right hand side, while also allowing him to go inside or outside opposing defenders, keeping them guessing as to what he is going to do. We see an example of this in the game against Gent.

Firstly, N’Dri has just won the ball back, and is isolated one-on-one with the defender. There is space on either side to drive forward, and the defender is on his heels, not knowing which way the young winger is going to go. 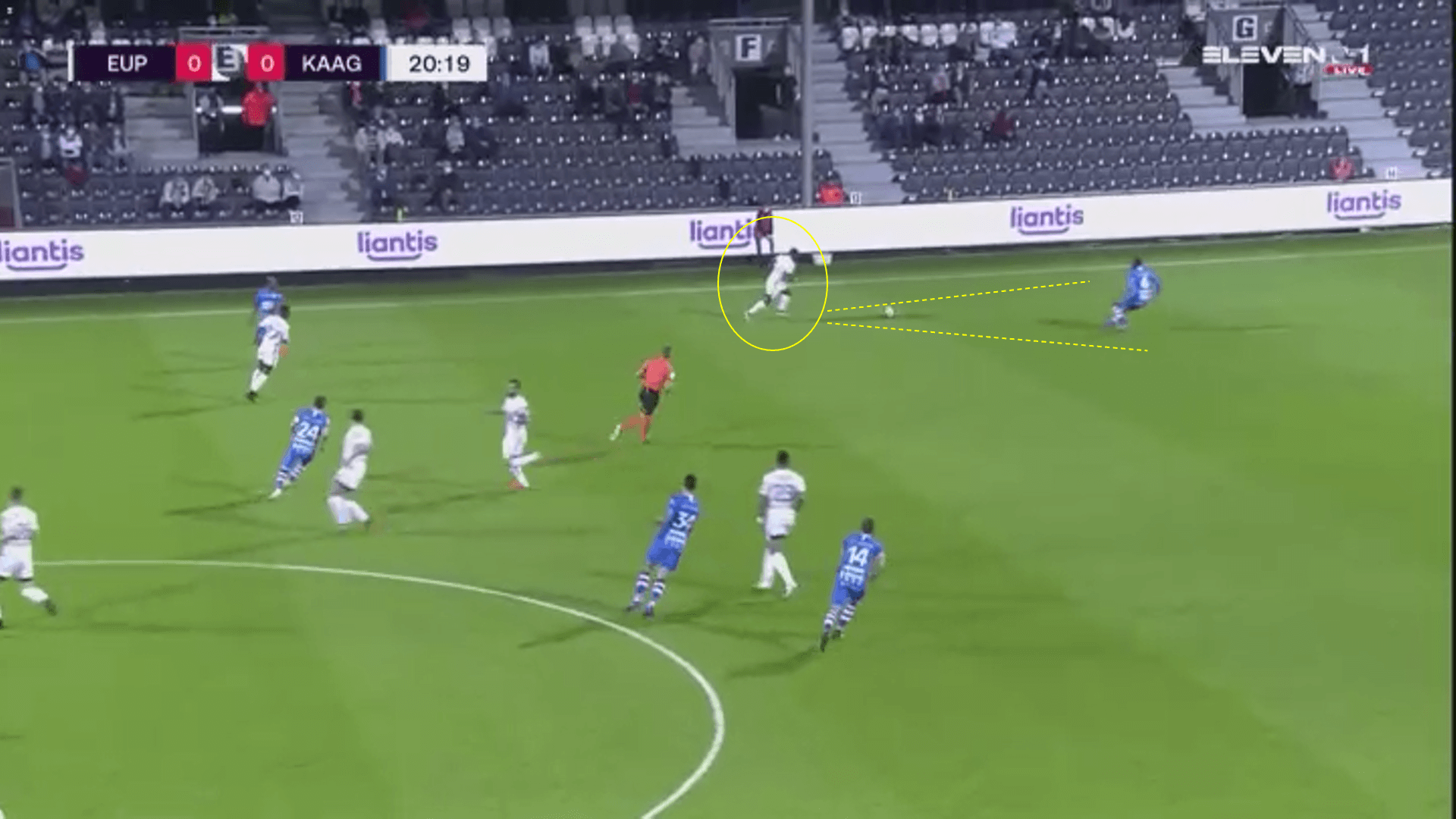 We see that N’Dri has taken the defender on the outside and made it to the box. From here, it appears the Ivorian winger is going to cross with his left foot, which he is more than capable of doing. However, using his momentum, and that of the defender, he chops inside to open up a better situation for the cross. Unfortunately, his cross is wayward, and the chance disappears, as the other Eupen player makes a run to the near post, while N’Dri attempts to cut the ball back to where he was standing prior to making the run. 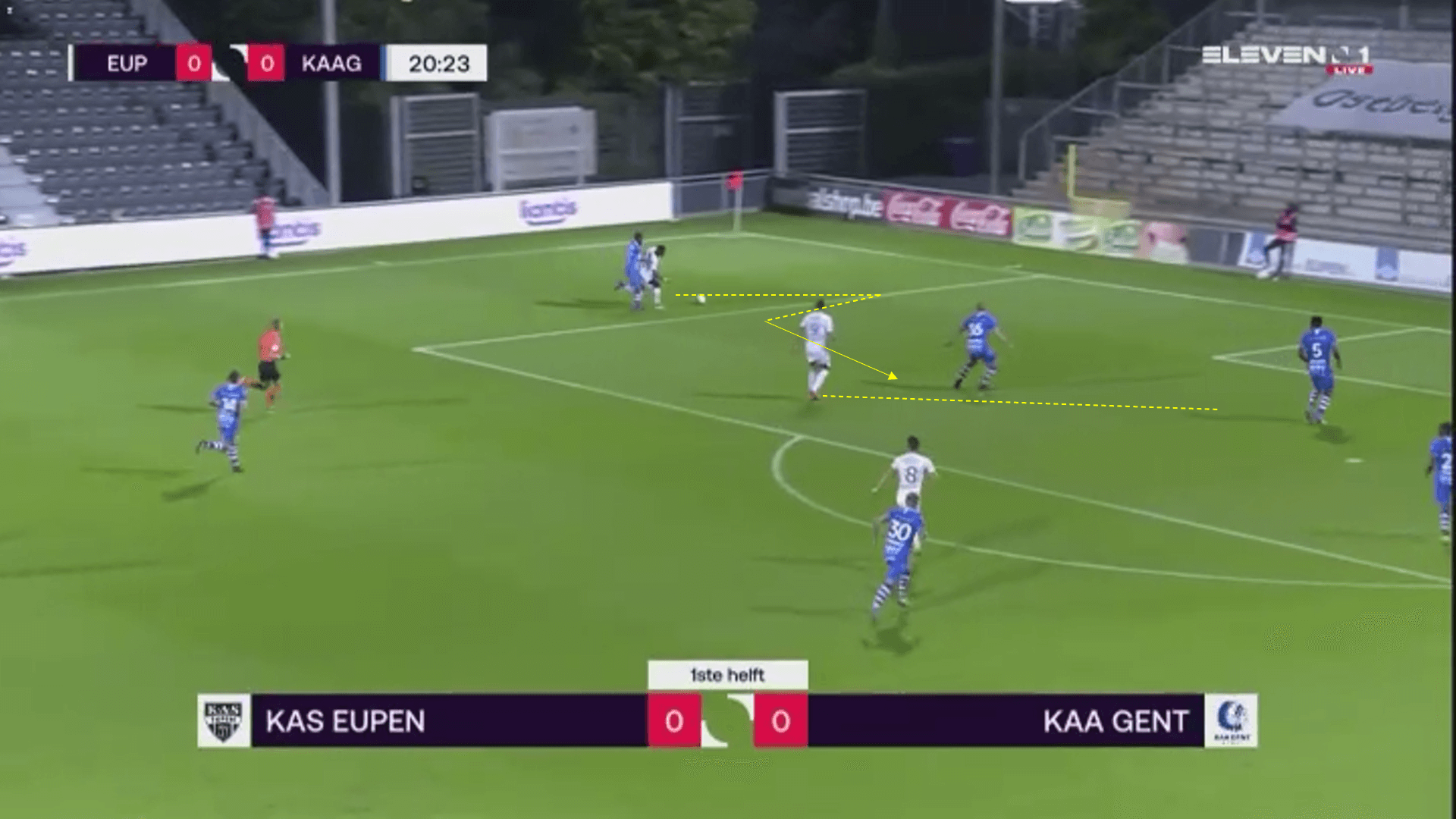 Later in the second half, we see that N’Dri has once again got in a one-on-one situation on the left-hand side. This time, the defender shows him down the line, not looking to allow him to cut inside like he did earlier in the game. 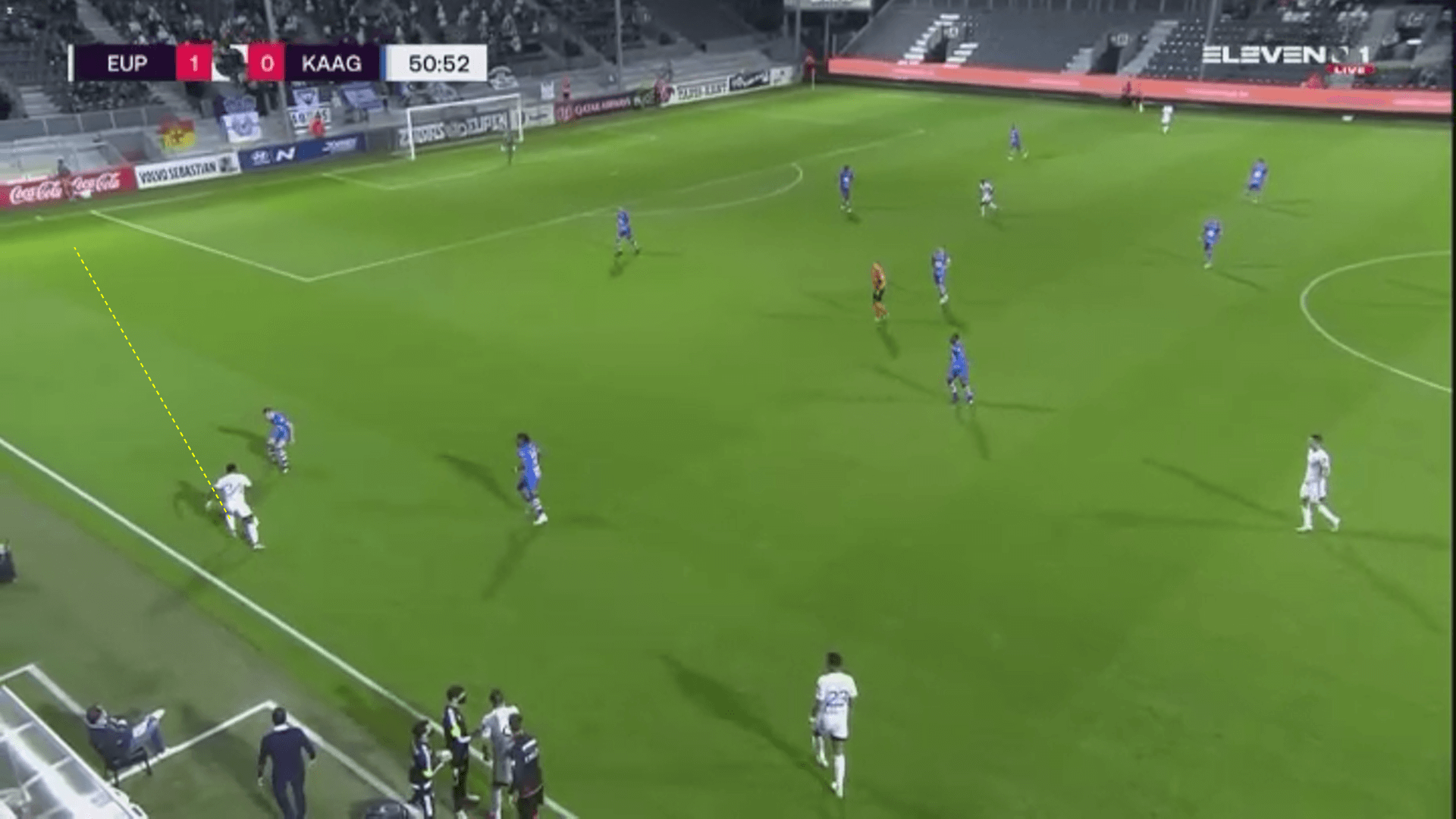 N’Dri is once again able to use his speed and ball control to beat the defender and get near the Gent box. This time, instead of chopping inside, he does opt to cross with his left foot. Taking these two scenarios from the same game, N’Dri should be encouraged to continuously look to mix up his approach to creating attacking opportunities, as it allows him to keep defenders guessing, and will open the game up more for him and his team. 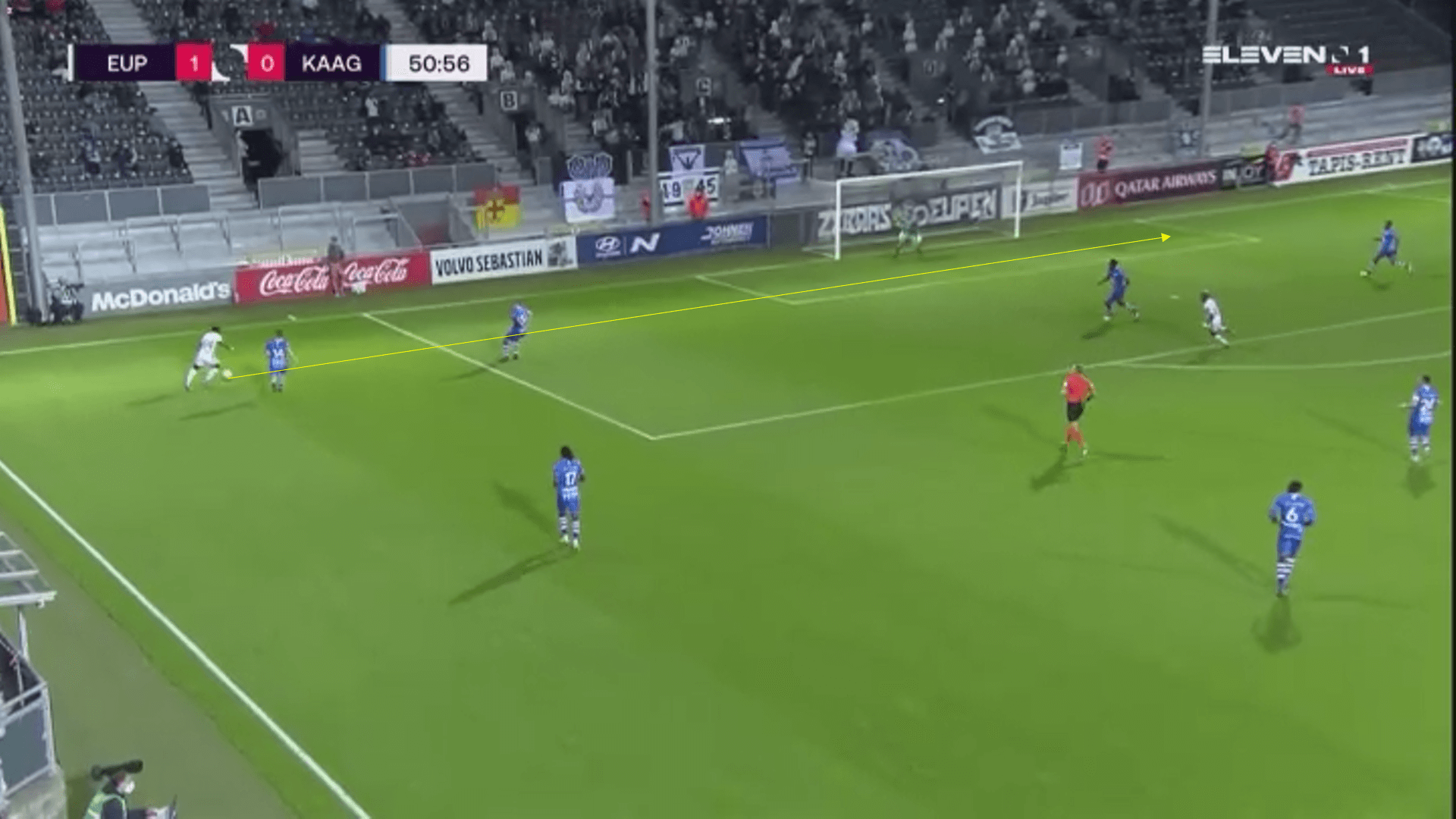 Eupen as a side sit 10th overall out of the 18 Pro League clubs when it comes to crosses, averaging around 14.08 per 90, which is near to the league average of 15.16. They like their wingers and full-backs to be the ones crossing the ball, meaning that N’Dri is expected to contribute to this. Being a good dribbler means he could find himself in good crossing positions, so execution is important.

Compared to other wingers, N’Dri sits 13th overall, averaging 3.49 crosses per 90, but his accuracy rating is only 29.62%. His teammate, and fellow Ivorian, Mamdou Kone, is in 12th, with an accuracy of 33.33%. Clearly crossing accuracy is an area that N’Dri should be looking to improve, even if he can get similar numbers to Kone that could help Eupen construct better attacking chances.

Both crosses that we saw earlier were wayward in the game against Gent. In the game against OH Leuven this season, N’Dri attempted seven crosses, of which only one was accurate. When watching the footage, we see a pattern emerging of the player not appearing to look up before crossing the ball. Below, as we have seen before, N’Dri is excellent in these one-on-one situations, and easily beats his man off the dribble. 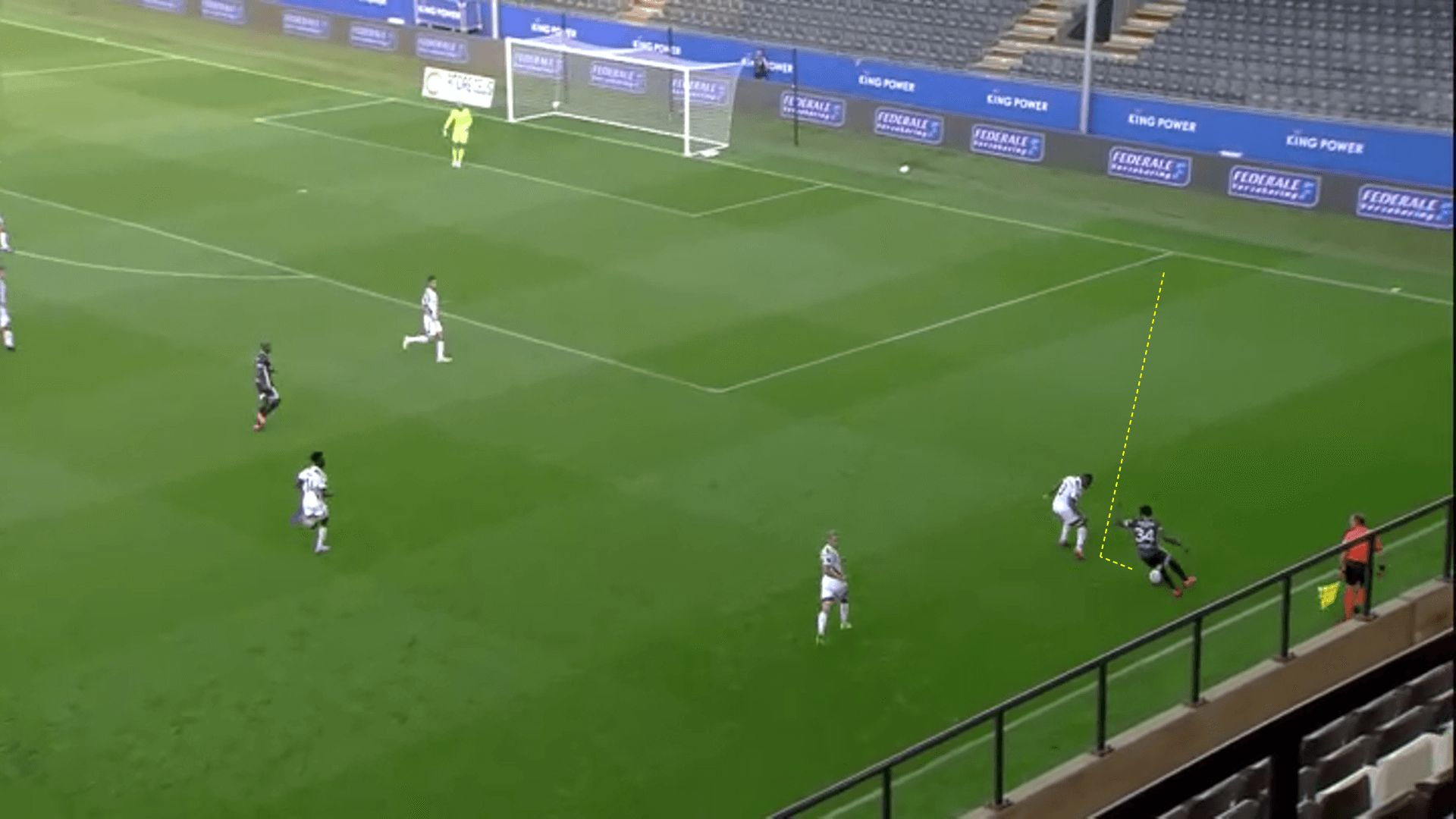 However, as he is dribbling, his eyes never look towards the box, as, understandably, he is focused on beating the defender with the ball. If he had managed to look up, he would have noticed that there were no options in the area, and that it would have been smarter to turn back and look for a different way to create a chance. 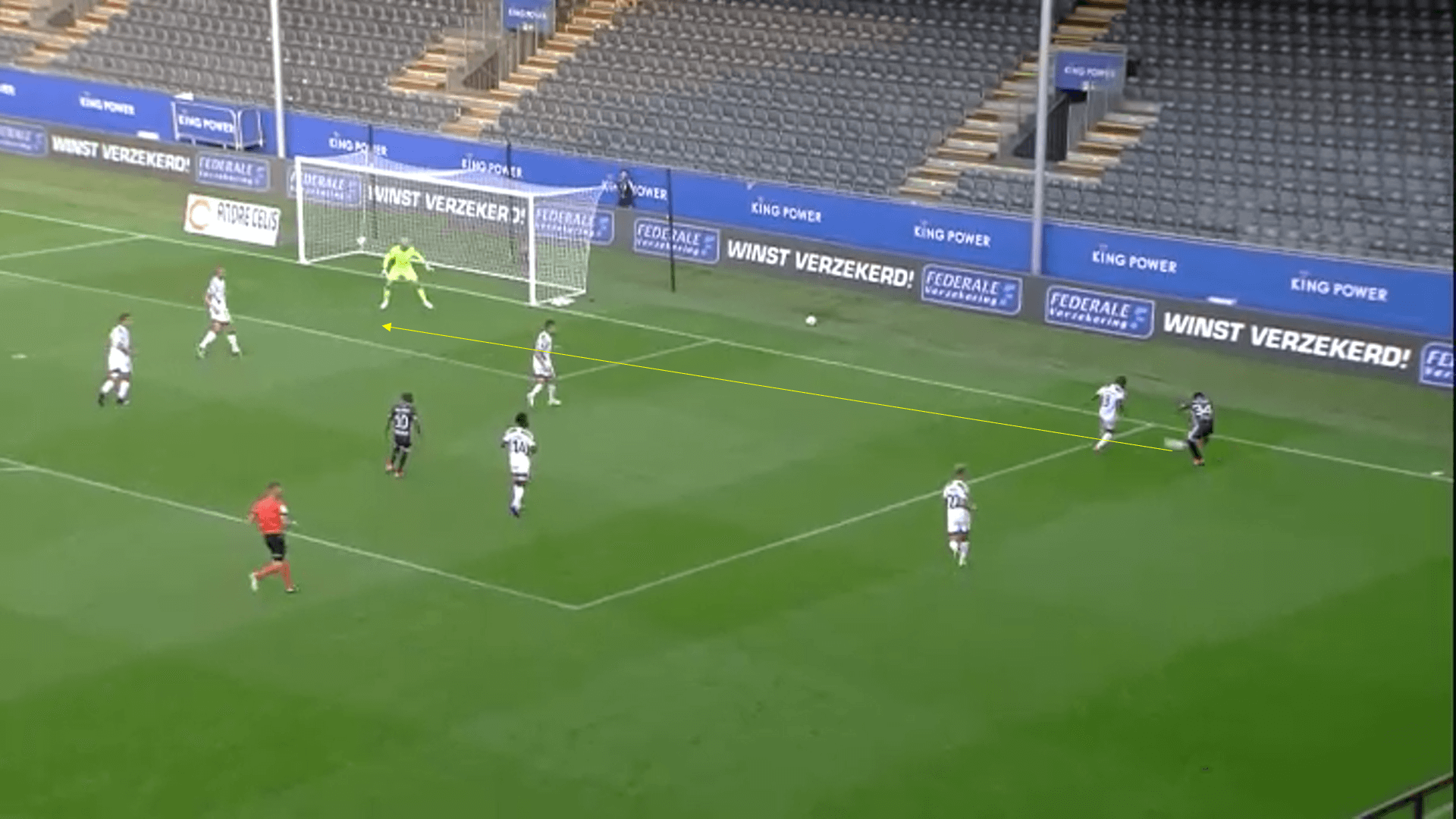 Ultimately, this is an area of the player’s game that should improve with time. His fantastic ability to get into crossing opportunities means his assist numbers should be higher, and more than likely will be higher as he continues to improve on his final delivery. If he can increase his accuracy on crossing to 30%, that should see an increase in assist numbers and chances created.

On the defensive side, the data for N’Dri looks very promising for a young player. He averages 9.93 defensive duels per 90, with a success of 54.05%; a very respectable number. This puts him in the top 10 compared to other players in his position league-wide. With his diminutive size, we wouldn’t expect N’Dri to win many aerial duels, and his 1.74 per 90 with 23.08% success is hardly surprising.

Counter-pressing has become a big focus of football tactics and analytics. Eupen as a team are not one to press intensely, sitting 13th overall, with a pressing intensity of 12.40, which is around the average of 11.32. As an individual, N’Dri is only averaging 2.15 counter-pressing recoveries per 90, which, when compared to the rest of the players who play in similar positions, puts him 72nd. It may be unfair to judge him as a counter pressure when his team isn’t a team that looks to press, so it would be interesting to see him line up for a side that actively puts teams under pressure when they lose the ball. 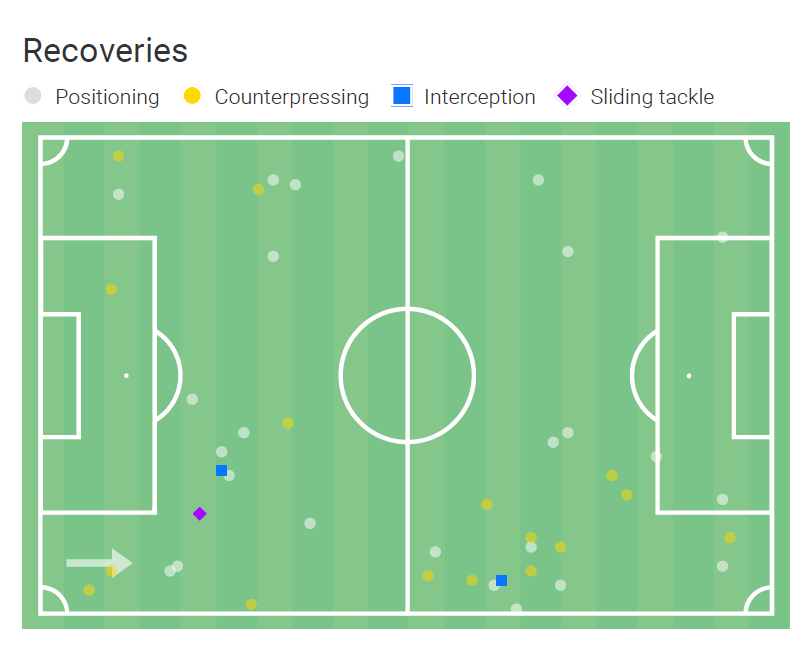 What is also encouraging is the mixture of positioning and counter-pressing. It highlights that, despite his low numbers in counter-pressing averages, perhaps due to team tactics, he could be effective in a side that looks to press more, as the above graphic shows. Furthermore, winning the ball back from positions is also encouraging, in that it suggests a level of defensive intelligence that should only increase as he gets more game time.

When we combine his recovery with his dribbling ability, it makes for a player that can be really effective in transitioning a side from defence to attack. N’Dri sits third compared to other players in his position when it comes to progressive runs, averaging 5.1 per game, with a progression of 145.24 metres averaged. These are numbers that suggest he can really help in transitions.

N’Dri is certainly an exciting prospect, and looks set to become a high quality dribbler as he develops more. With that development, in-game experience should help him iron out some issues he has, especially when it comes to crossing. Furthermore, his defensive data is good enough to suggest that he can help his side win the ball back, and then use his ability to run with the ball to help transition the side from defence to attack.

Overall, N’Dri is certainly a player to look out for in the future. For his own development, staying with Eupen for one or two more seasons could really help him become a top player in the Belgian Pro League, which should be his main target before thinking of moving on to a bigger league.