While young talent always catches the eye in the Belgian Pro League, it is a player in his prime who has been really lighting up the league at the start of the season. Recently promoted Beerschot, who share an owner with EPL side Sheffield United, have taken the league by storm. Their talismanic playmaker Raphael Holzhauser has really stood out, passing both the eye test and lighting up the data metrics.

Holzhauser, formerly of Bundesliga side VFB Stuttgart, joined the Belgian side after his contract expired at Swiss side Grasshopper. During last season’s promotion campaign he managed seven goals and eight assists in 27 league matches. To start this season he already has five goals and three assists in just six matches, contributing to around 66% of the sides goals. These are impressive numbers for a player who plays mainly left of a midfield three.

This tactical analysis, in the form of a scout report, will look at how the Austrian has been the focal point of the Beerschot tactics. This analysis will also look at his composure in front of goal, as well as his ability to provide his side with goalscoring opportunities.

The focal point of progression

Holzhauser is in the top 10 of players when it comes to passes received with around 25.28 per match. Beerschot are keen to get him involved in all attacks, as he can make the difference with his passing and clever movement. While he is by no means the quickest, he does have quick feet and is able to dribble, as he showcased with one of his goals this season.

Rather than progression through the dribble, Beerschot look to Holzhauser as their ball player. Like a quarter-back in American Football, or a traditional point-guard in basketball, the Austrian can complete all manner of passes. Looking at the below ball progression graph, we see the impressive passing stats. For passes over 40 metres, he is completing an impressive 95.8% of those passes, while between 30-40 metres he is also up at 93.8%. 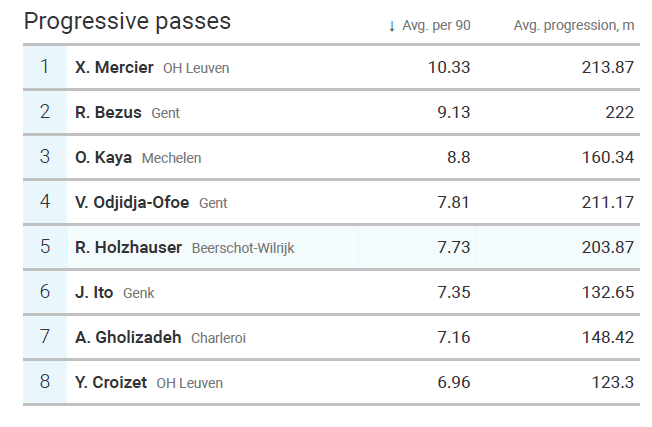 With players like Noubissi upfront, Holzhauser fits within the tactics that coach Hernan Losada is looking to play. The Cameroonian striker is able to stretch the defence and get in behind, meaning that Holzhauser has a target for these long passes. This helps push Beerschot up the field and put pressure on the opposition defence. When we look at shot assists, we see this link up play through the data. Holzhauser has assisted two of Noubissi’s goals this season, while also providing 10 shot assists with an impressive xA of 1.22.

Comparing the data to the league as a whole, we see how well Holzhauser ranks in terms of progressive passes throughout the league, which clearly indicates why Beerschot use him as the focal point of their transition game. He sits fifth overall, averaging 7.73 progressive passes per 90, with an average progression per 90 of 203.87 metres.

For teams facing up against Beerschot, they know that denying Holzhauser the ball is their best chance to limit the attacking potency of the side. This is harder than it sounds due to the freedom he is granted to drift into any area of the pitch he sees fit. Looking at the below heat map, we see how he is allowed to drop deep in order to pick up the ball, or push deep into the opposition half to affect the play. Allowing him to drop deep risks allowing him to play the long balls that he is highly accurate at. We will see later on why when he pushes up he is also dangerous. 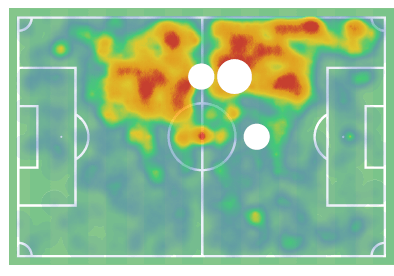 With five goals so far this season, Holzhauser has already exceeded his 2.91 xG and is averaging an impressive 0.81 xG per 90. This suggests that he is getting himself into promising goals-coring positions almost every game. This is further evidenced when we see that the Austrians xG per shot is 0.20, on an average of 1.77 shots per 90.

Holzhauser shows great composure when in front of goal, which is one of his main strengths when it comes to scoring. One example of this was in the game last season against Club Brugge. When we consider the context of the game, it was unlikely that a side like Beerschot would get many chances against arguably the best side in the league. Therefore, when the Austrian is expertly played through on goal, the pressure on him due to the lack of chances Beerschot were expected to have in the game would have been high. 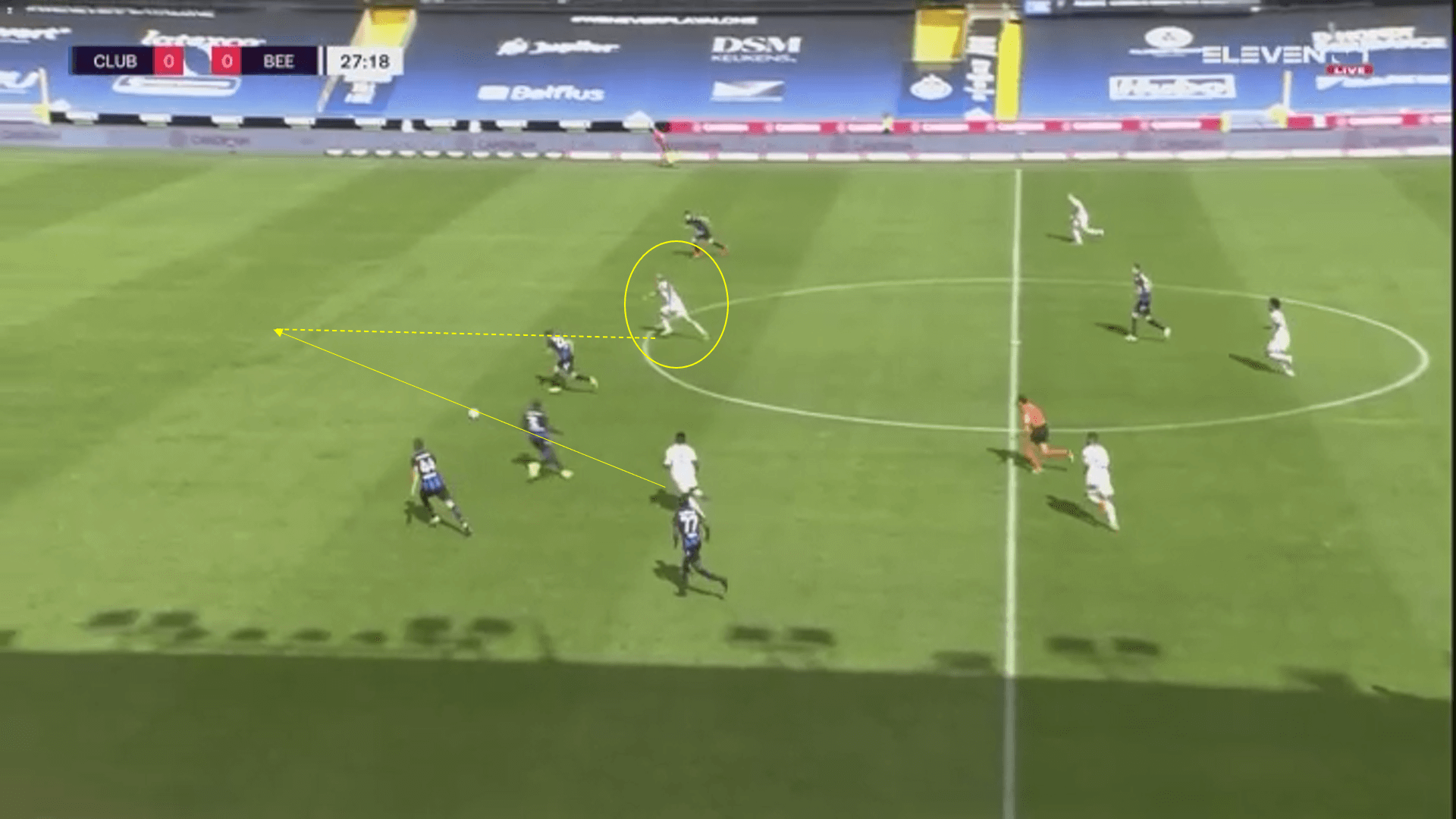 However, Holzhauser does not panic, and despite pressure from the defenders carries the ball into the box. Again he remains composed in this situation, and calmly slots the ball past the onrushing keeper. This show of composure is a feature of Holzhauser’s goals so far this season. 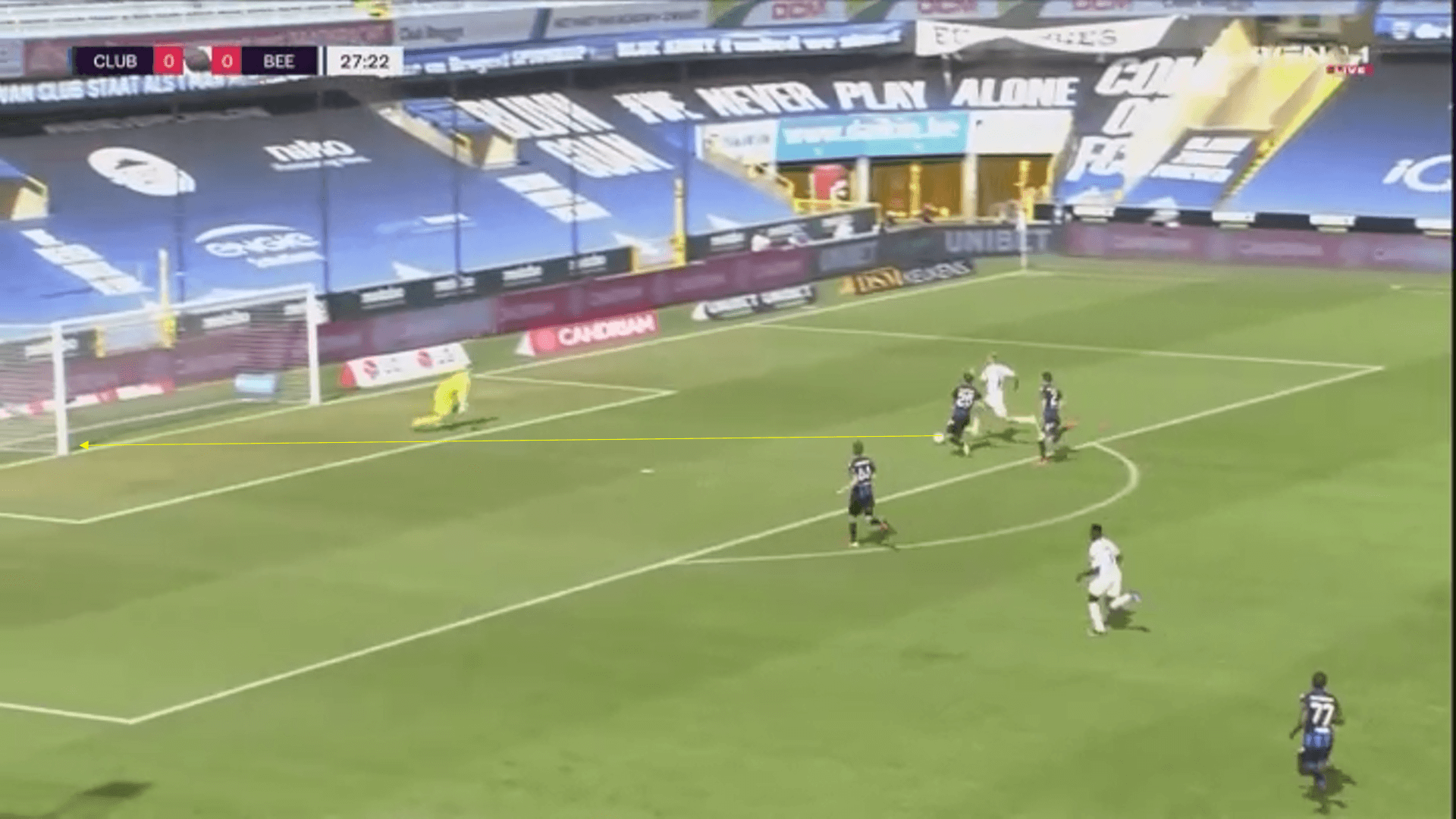 Against Zulte Waragem, Holzhauser scored arguably his best goal of the season. When he initially picks the ball up on the edge of the box, as we see below, he does have the chance to shoot, but there is a risk that the defender will block the shot. If Holzhauser was less relaxed when in these positions he may rush this shot and end up wasting the chance. 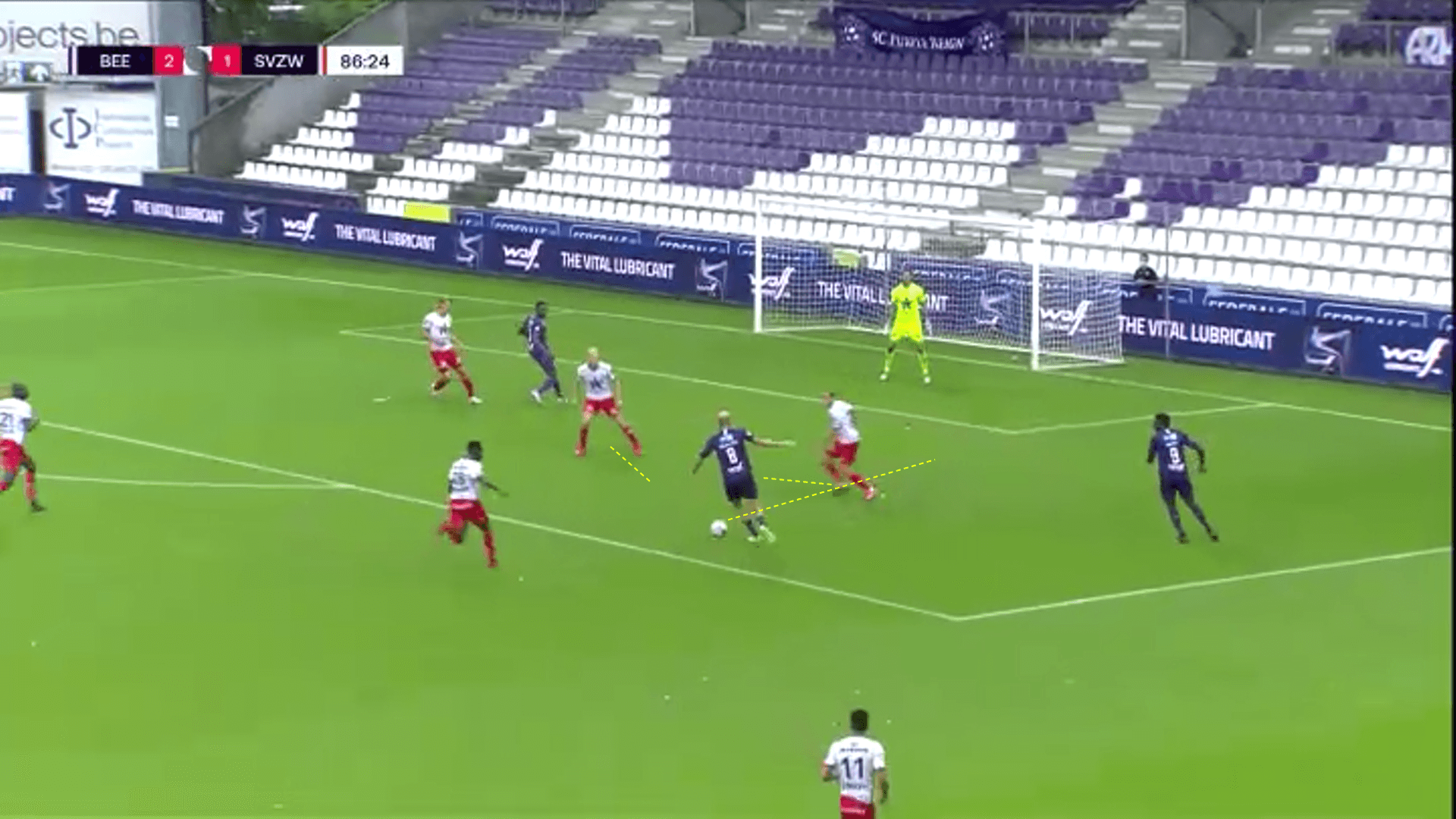 Instead, Holzhauser cuts inside the defender, who is off balance as he expects the shot. Remaining calm, he is able to stab the ball past the keeper. These are just two examples of Holzhauser’s composure in front of goal, and are indicative of his approach to football as a whole, looking calm and in control throughout the 90 minutes. 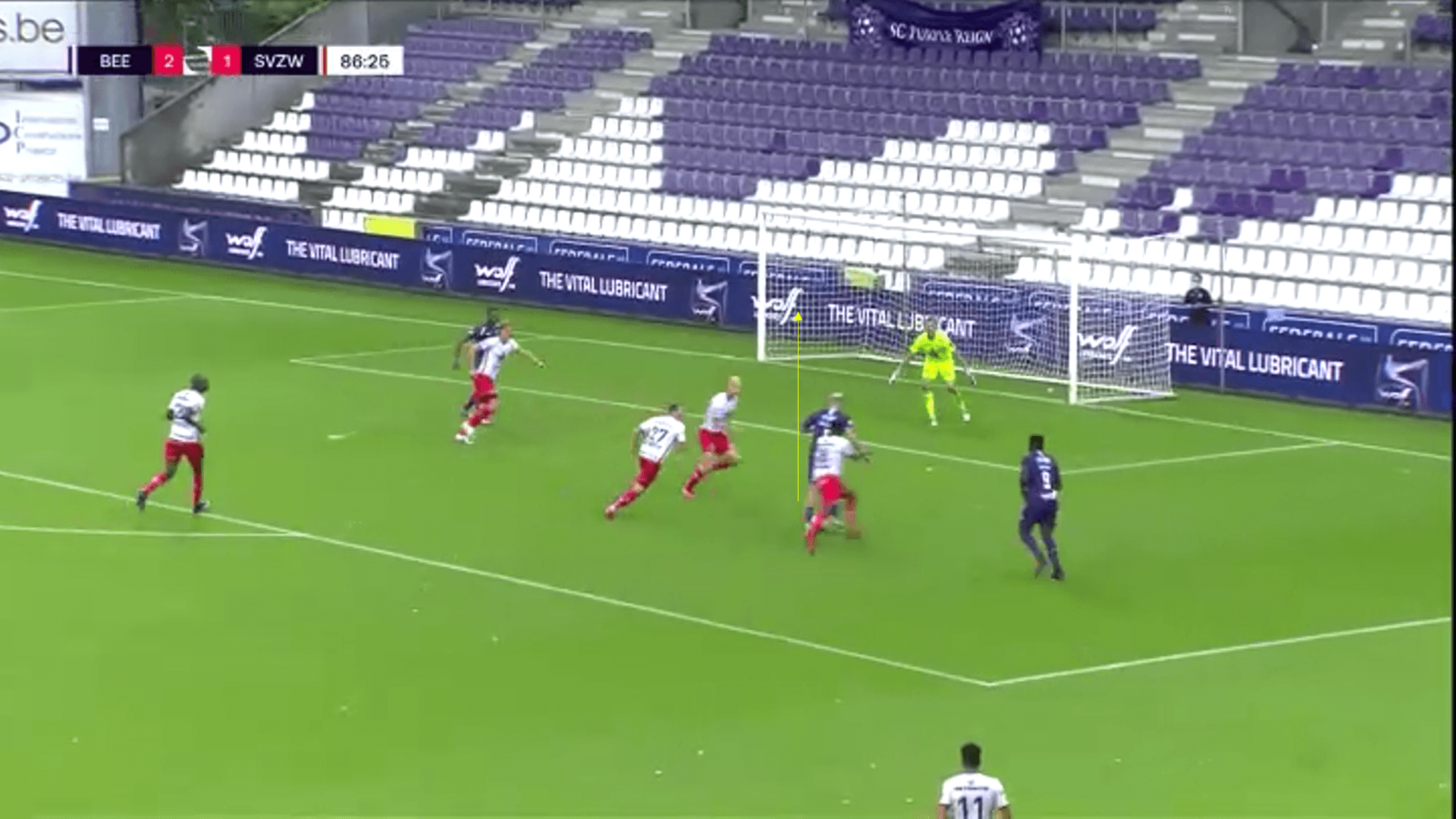 Holzhauser’s ability to progress the ball has already been highlighted above. Yet when it comes to making the decisive passes, teams should be wary of giving him any space or even giving away set pieces in dangerous areas. In the game against Genk, Holzhauser was exceptional, scoring twice and providing an assist. His assist really showcased his ability to make key passes, we see below that the goalkeeper is near the edge of his six yard box, making the margin or error of the pass difficult. 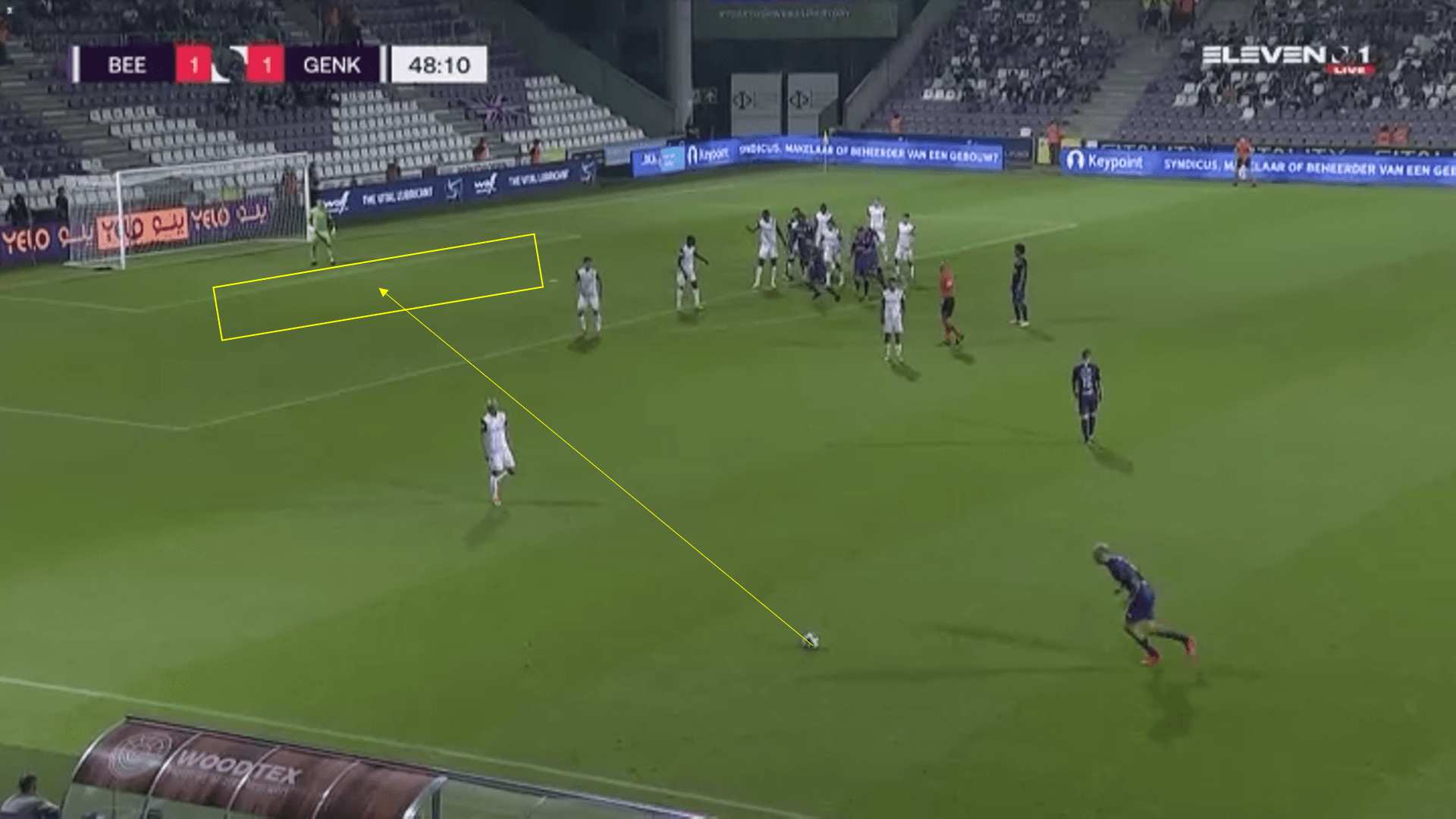 The Austrian’s ball is perfect. He manages to put it into an area that the keeper had no chance of getting, while also taking all of the defenders out of the game. The ball is almost impossible to defend for Genk due to its pace and height, giving the defence little chance to react. 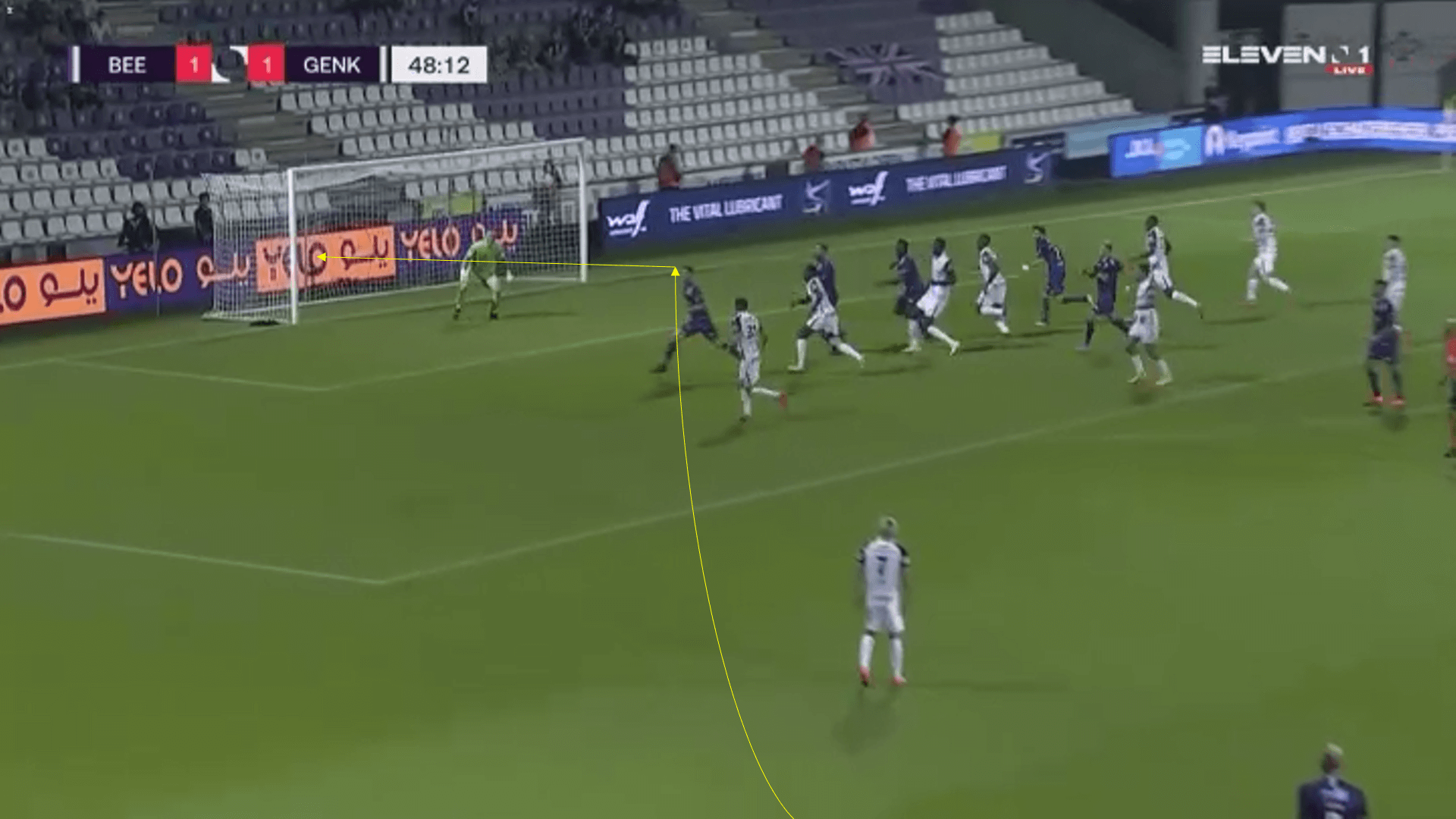 Another example, again from the game against Zulte, highlights Holzhauser’s ability from a non-dead ball situation. Again, like the cross, the margin for error on this pass is small. He needs to be able to get it past the full-back in front of him while also putting it beyond the centre-back, who we see is already anticipating the pass and dropping back. 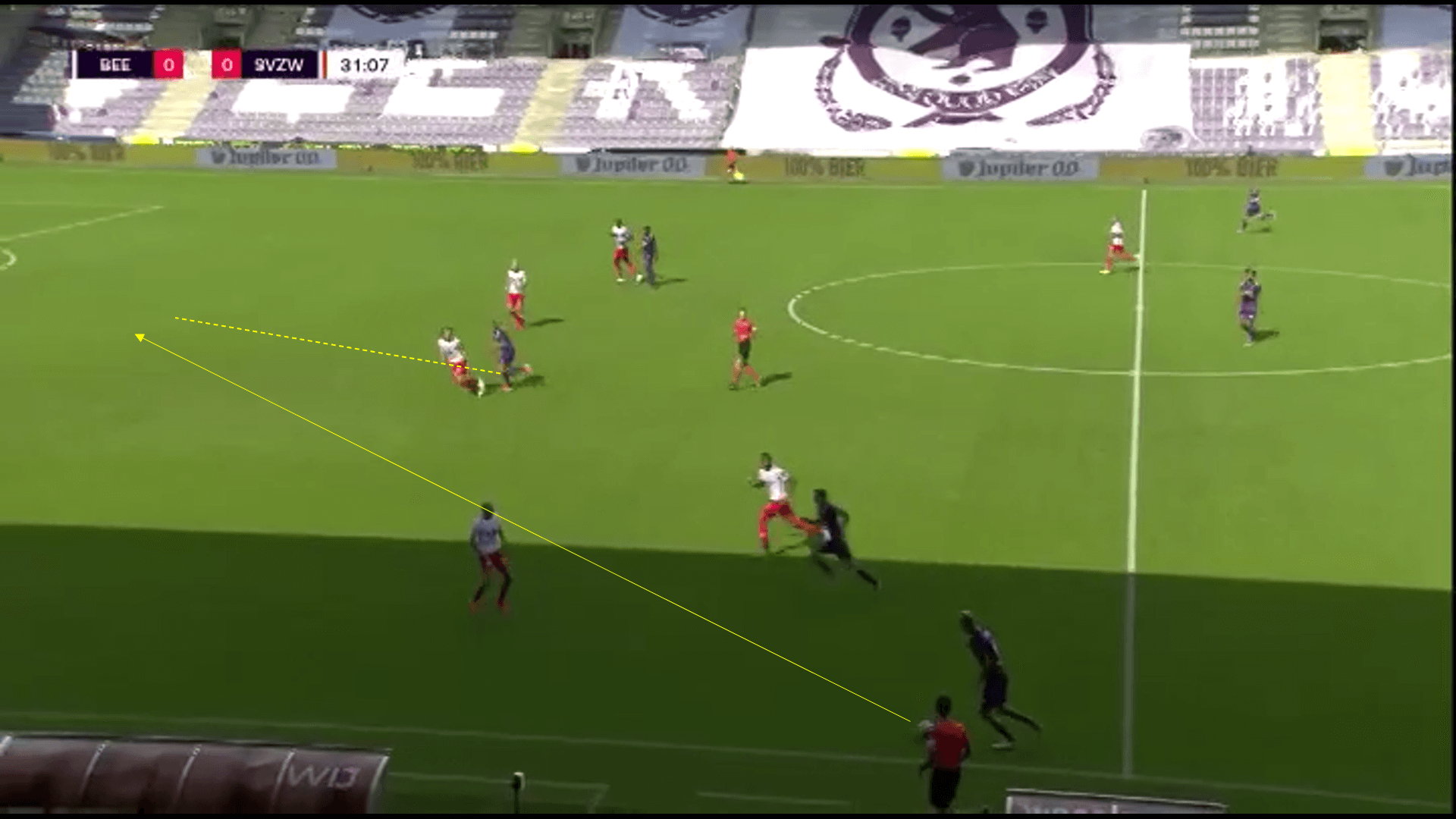 Yet Holzhauser is able to do just that. He is able to curl it round the full-back, while also putting it beyond the back-tracking centre-back to find the striker, who is able to finish off the move. Like with the set piece, this passing ability of Holzhauser is difficult to defend, as he is able to pull off passes of high risk that put his team in position to score. It isn’t a surprise that Holzhauser already has four assists and has exceeded his 1.62 xA and is averaging 0.48 assist per 90.

Holzhauser has been a shining star of the Belgian Pro League so far this season. If he can keep up this form for the majority of the season then it wouldn’t be surprising to see him start to be linked with bigger clubs domestically and internationally. However, in order to get the best out of the Austrian, it would be important for clubs to see how Losada has given him a free role and almost designed his attacking tactics around the playmaker.