Germany took on Switzerland in the UEFA Nations League on Tuesday, with the Swiss coming to Cologne for the match. A back and forth match saw Switzerland continue to edge ahead, only to have the Germans come clawing back with some excellent attacking on display. Ultimately, the two teams settled on a deserved 3-3 draw. 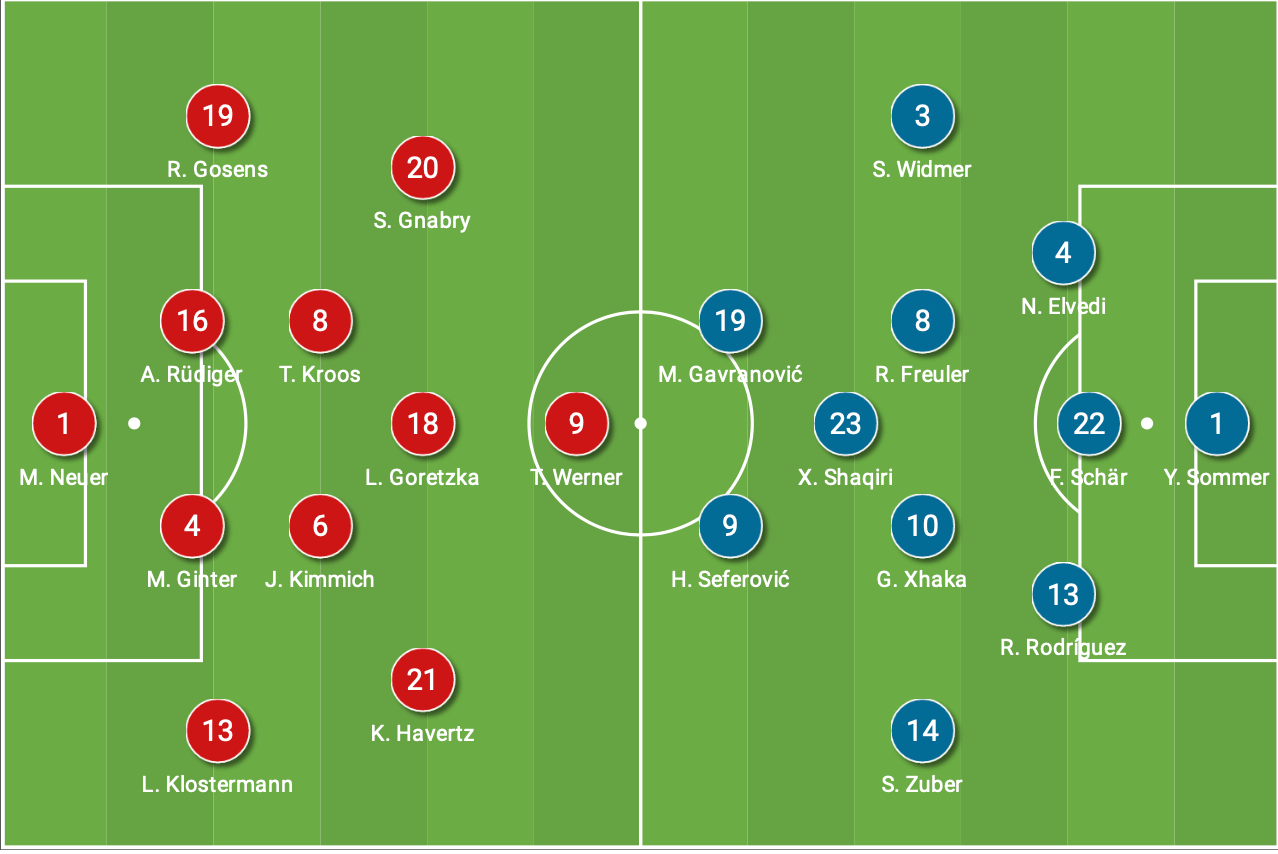 Joachim Löw sent Germany out in a 4-2-3-1 formation, moving away from the much-maligned back three that the Germans had been playing in. Bayern Munich’s Manuel Neuer started in goal with Chelsea’s Antonio Rüdiger and Gladbach’s Matthias Ginter as his centre-backs. Lukas Klostermann started as the right-back while Robin Gosens started as the left-back. The two holding midfielders were Joshua Kimmich and Real Madrid’s Toni Kroos. Leon Goretzka was in front of them centrally with Serge Gnabry on the left flank and Kai Havertz on the right while Timo Werner started as Germany’s single striker.

Vladimir Petković sent Switzerland out in a 3-4-1-2 with Yann Sommer in goal. The back three consisted of Nico Elvedi, Fabian Schär, and Ricardo Rodríguez. The two central midfielders were Remo Freuler and Granit Xhaka with Steven Zuber on the left flank and Silvan Widmer on the right. Xherdan Shaqiri played as the attacking midfielder, supporting his two strikers, Haris Seferović and Mario Gavranović.

Germany really struggled to stay organised defensively, especially when transitioning from attacking to defending. That being said, the third goal they let in was again because of a lack of organisation on their part in what was pretty clearly a part of the defensive phase. Right before the first Swiss goal, Germany almost allowed the Swiss to score off of another transition. 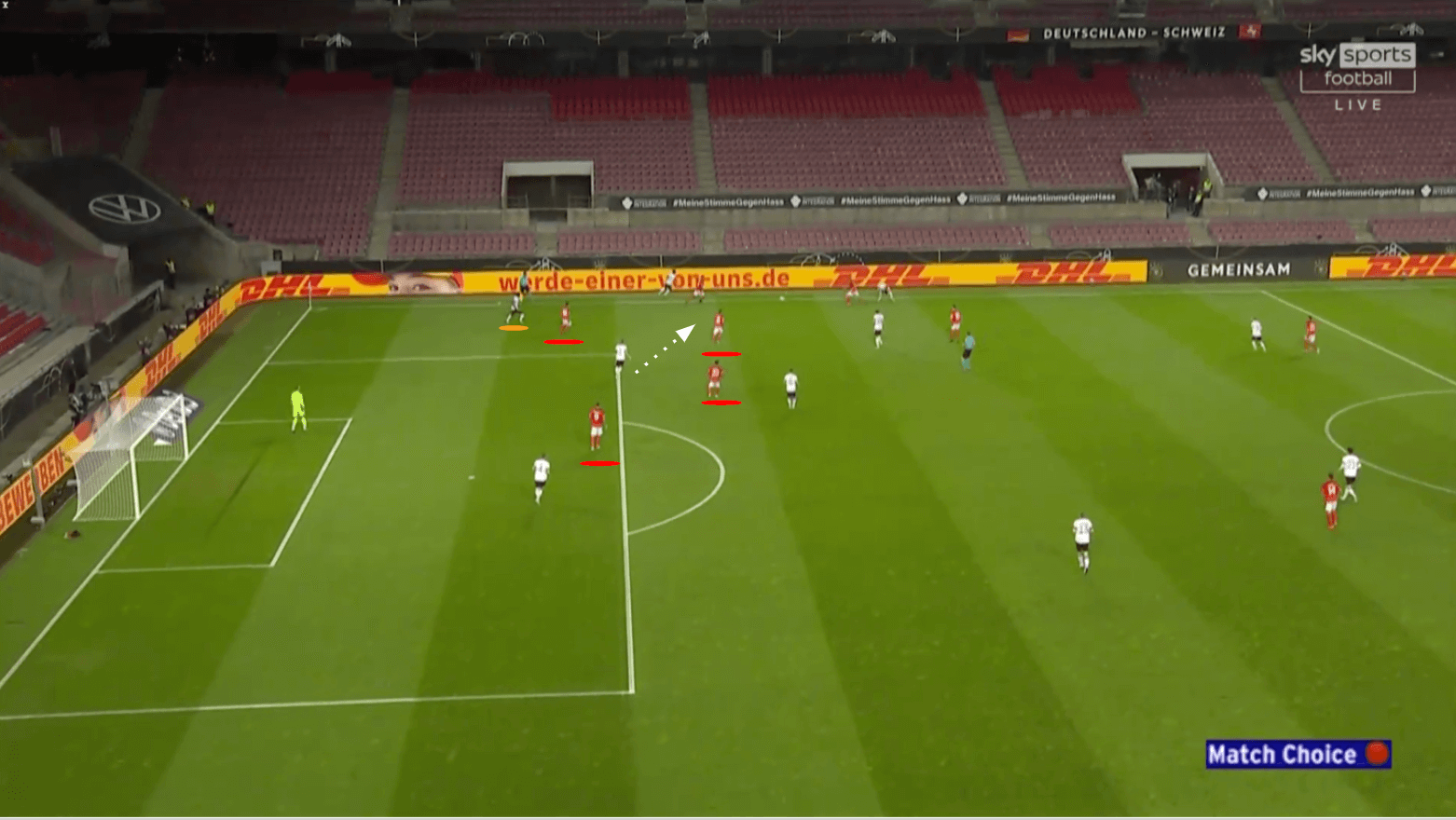 The poor build-up started with a long pass from Neuer to Gosens, which was essentially a horizontal ball. This allowed the Swiss to press immediately, putting Gosens and then Gnabry under an immense amount of pressure. Gnabry ultimately turned and played a blind pass, with the image above being the result. There is a large advantage for the Swiss because, at their worst, they have numerical equality in the final third. In reality, Rüdiger, who is marked in red, is so out of position and so poor in his reaction that the Swiss actually have a 4 v 3 advantage which becomes a 4 v 2 once Kroos steps forward to fill the space. This advantage allowed Shaqiri to receive the ball inside the 6-yard-box and put a shot on target, ultimately being denied by Manuel Neuer.

For Switzerland’s second goal, Germany’s hesitation when turning the ball over in a really bad spot cost them dearly. The Germans were looking to progress through the middle where they were numerically even with the Swiss. However, Leon Goretzka made a run forward into space, but he was not followed by anyone. Instead, the Swiss held their line and intercepted the pass. 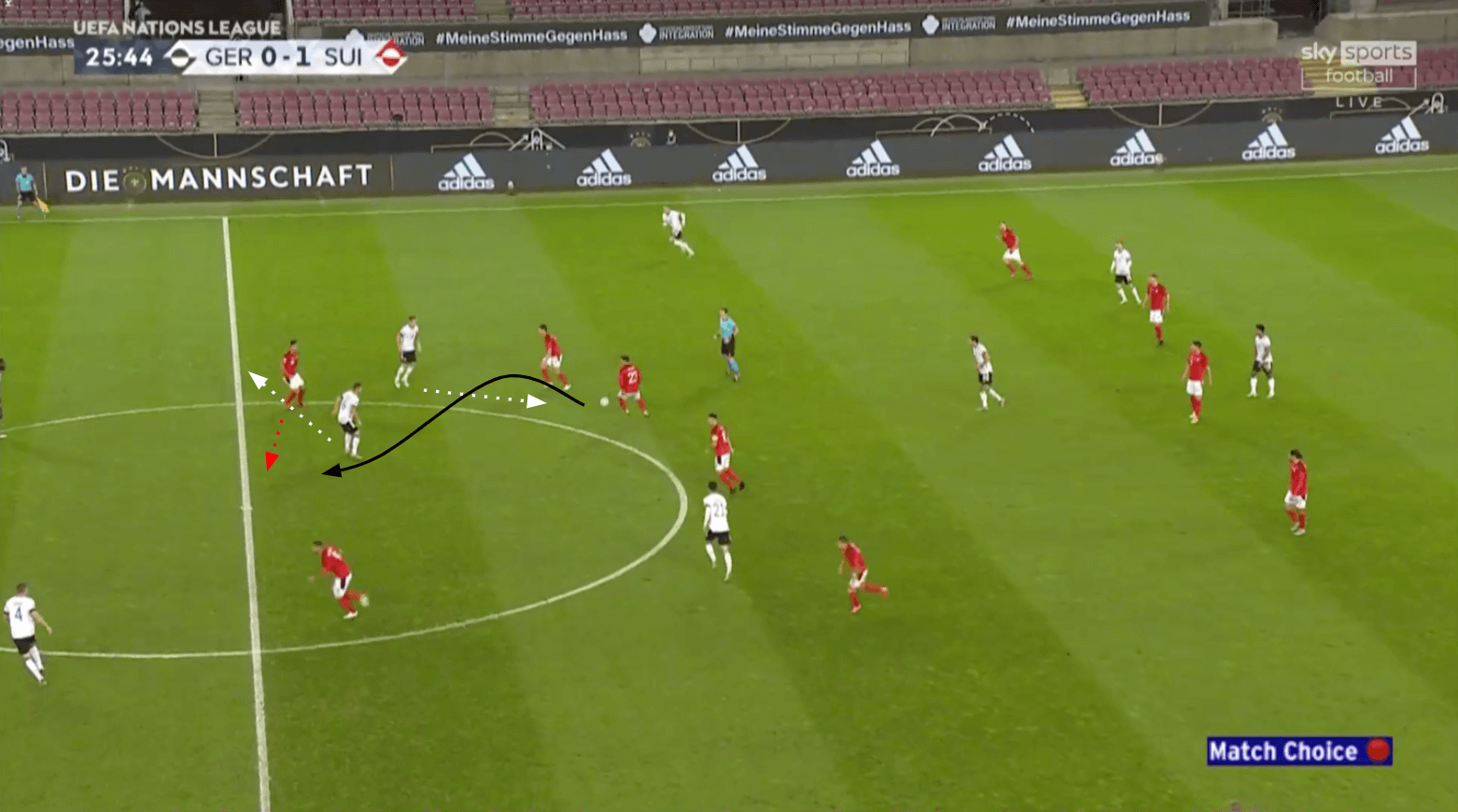 As Shaqiri recovered the ball, he was not put under any pressure despite facing his own goal. This is typically a perfect time to press an opponent, but for whatever reason, it didn’t happen. Toni Kroos finally stepped forward as Shaqiri turned around, but that caused Kimmich to slide to his left to cover the runner. Kroos somehow managed a deflection, but the ball still made it to Gavranović, who was able to turn and find a teammate. The lack of quick decision-making hurt the Germans as they couldn’t get pressure on the ball in the centre of the park.

Switzerland’s final goal came courtesy of an unorganised German defence. An initial rotation of positions saw Rüdiger and Gosens switch as Rüdiger followed his man out to the flank. 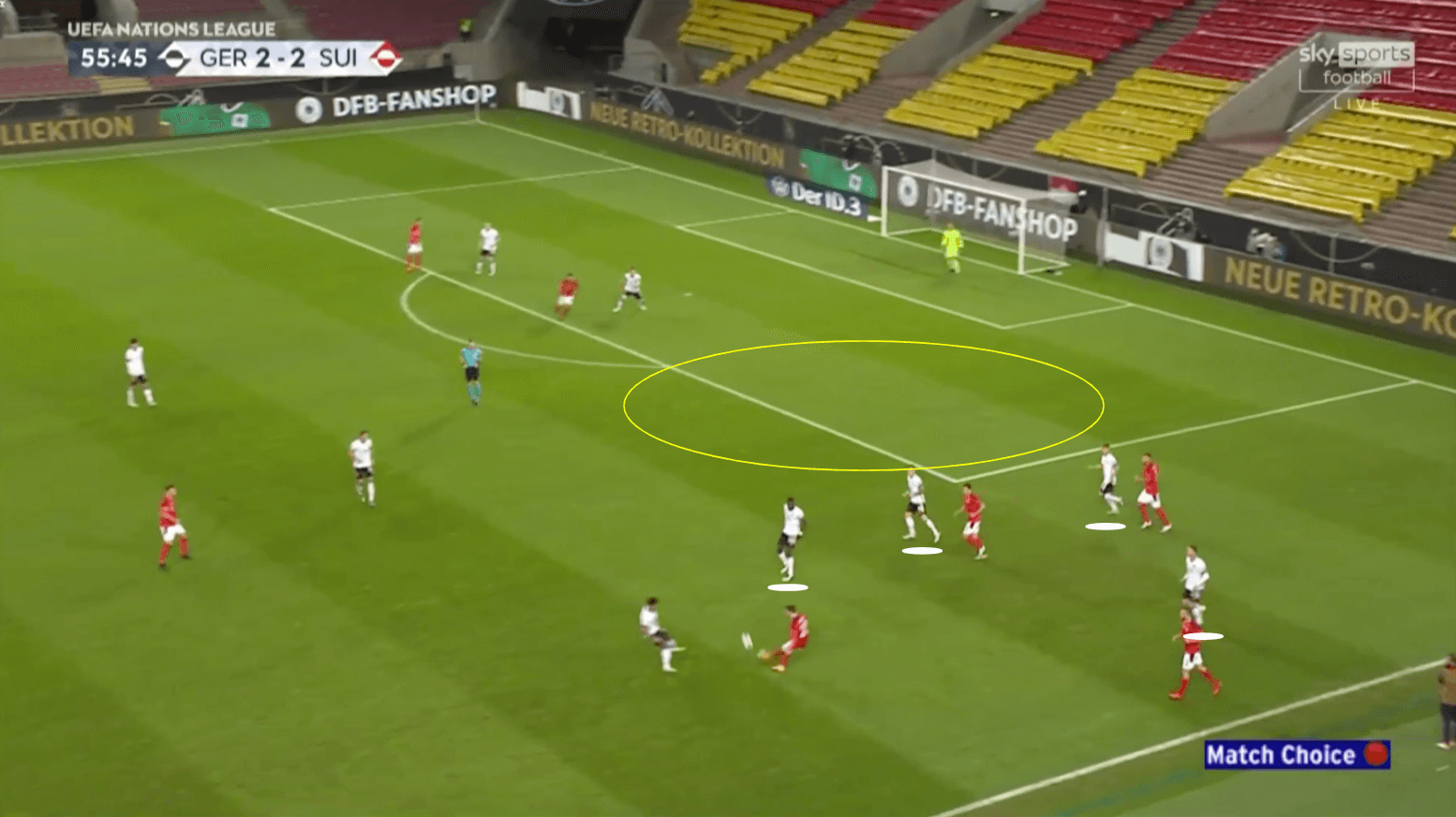 However, as Gosens progressed back to his position, Rüdiger did not. This led to an incredibly large amount of space opening up on the right side of the German defence. While the space eventually closed, Rüdiger still struggled to make it back to his line, and a through ball was played into the right side for Seferović to put on target. 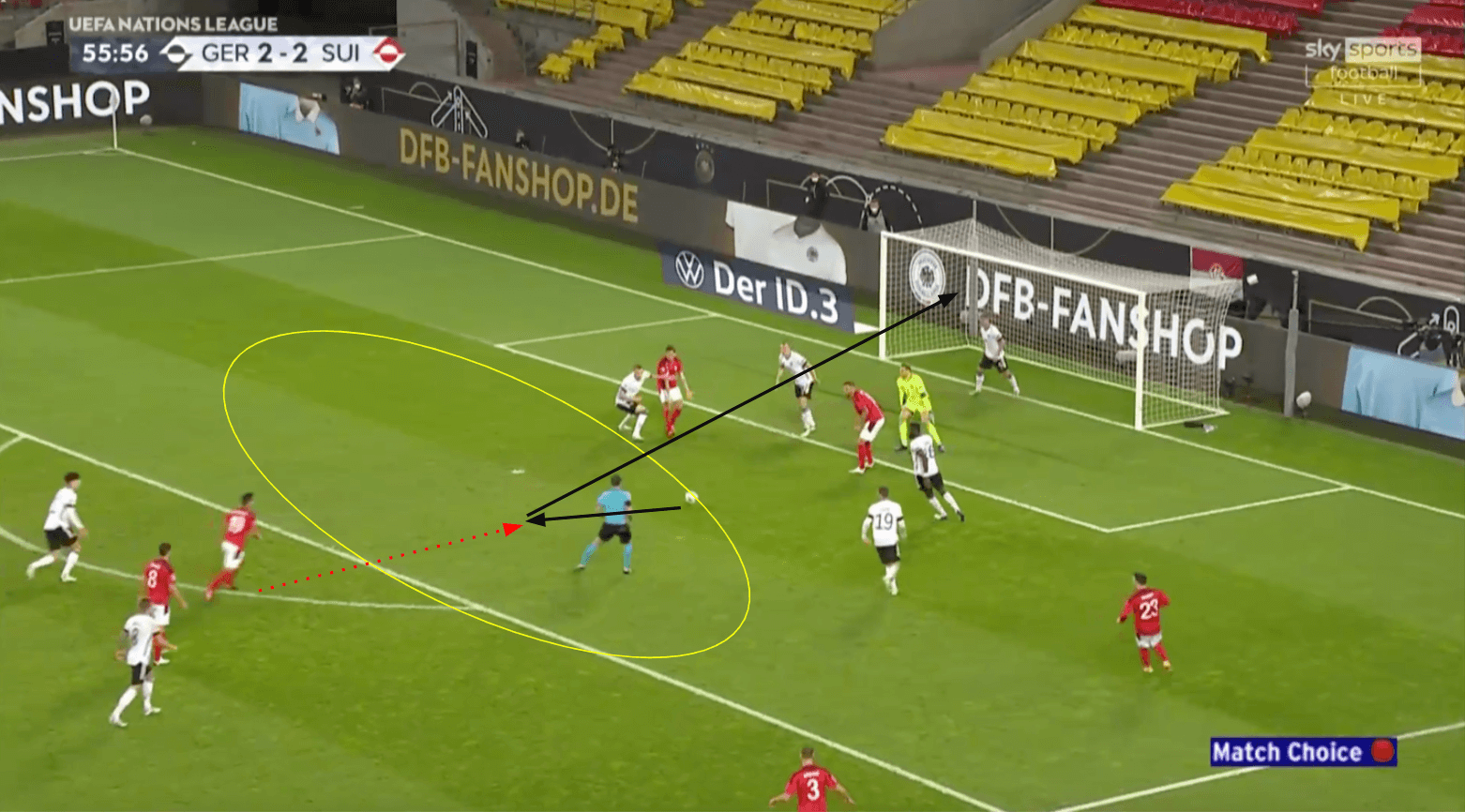 Neuer was actually able to force a save, but the ball rolled back into the penalty area. The undisciplined German defending continued as none of their midfielders dropped back to defend. While Kimmich was in goal, Havertz, Goretzka, and Kroos stood at the edge of the box. Their slow reactions meant all they could do was watch as Mario Gavranović smashed the ball into the back of the net.

Swiss speed of play in transitions

While Germany didn’t do themselves any favours, the Swiss’ speed of play and progressive passing allowed them to attack and not allow the German defence to easily organise. This meant that they could keep the Germans off-balance for longer, resulting in better chances on goal. Their first big opportunity to use their speed and passing to disorganise Germany came in the fourth minute. 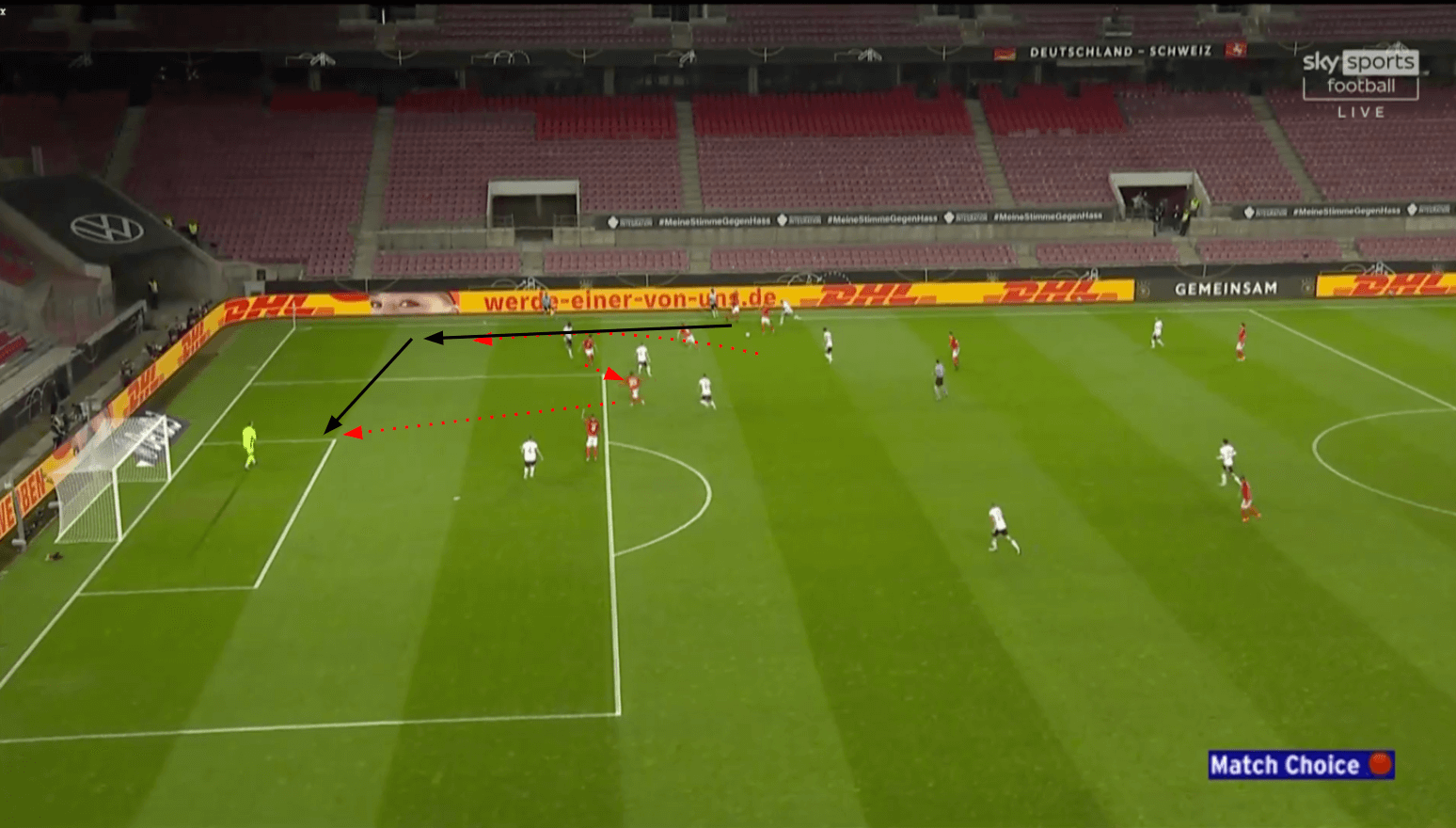 As Switzerland gained possession, Gavranović, who was starting in a wide position, quickly moved inside. He was followed by Rüdiger, who was entirely out of position. Because Rüdiger followed him, this opened up more space on the right flank – this was quickly occupied by Remo Freuler, who had made his run from the half-space in order to receive the ball. As Germany became more compact, Switzerland simply went around them. This allowed for Freuler to send in a cross to Shaqiri, who was open at the near post after he made a smart run after recognising all the available room.

For Switzerland’s second goal, their speed of play again set them up for success. Germany’s hesitation in the press (as previously covered) allowed Shaqiri to turn. While Kroos eventually forced a deflection, Gavranović was still able to win possession of the ball. 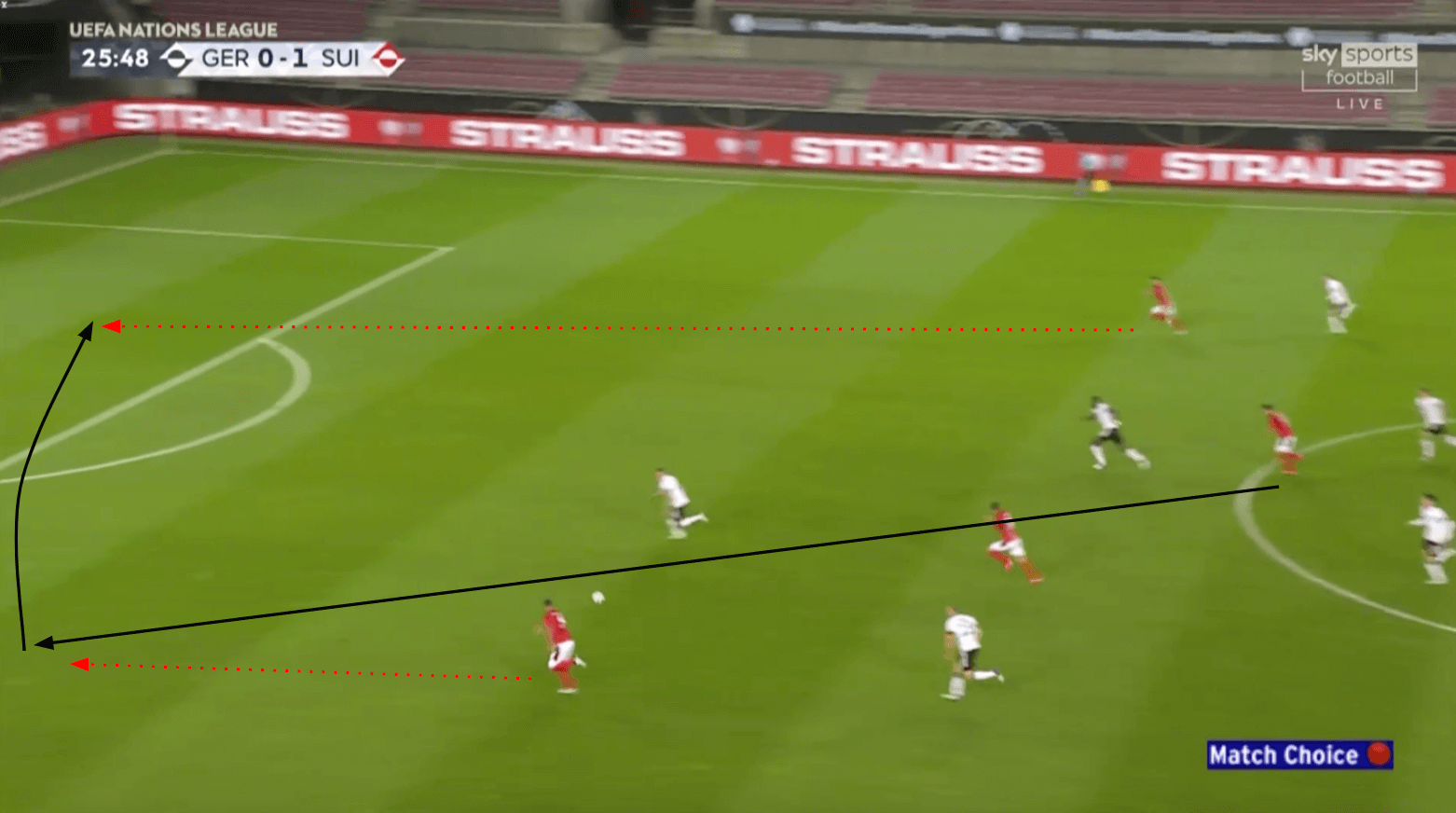 His recognition of space and time allowed him to use his first touch to rip a pass into space towards his striking partner, Seferović. Seferović was able to run into space and widen the attack, not allowing Germany to become compact, thus making it harder for them to defend. Seferović recognised the large amount of space on the other side and delivered a cross that went through two zones to Freuler, who did quite well to chip Neuer with his first touch and still get it under the bar. While the Germans certainly didn’t do themselves any favours, the Swiss were able to use their progressive passes and speed of play to keep Germany off-balanced, resulting in some good chances for the Swiss side.

Many in Germany are likely to be less-than-enthused by this German result, but the Germans still looked solid going forward, working to get men in between defensive lines of pressure and create numerical advantages. They also looked to manipulate Switzerland’s back line, which they did quite well on multiple occasions. A perfect example is shown below, where Germany was able to widen the field with their outside backs while having both wingers, their attacking midfielder, and their striker in between two lines of pressure. 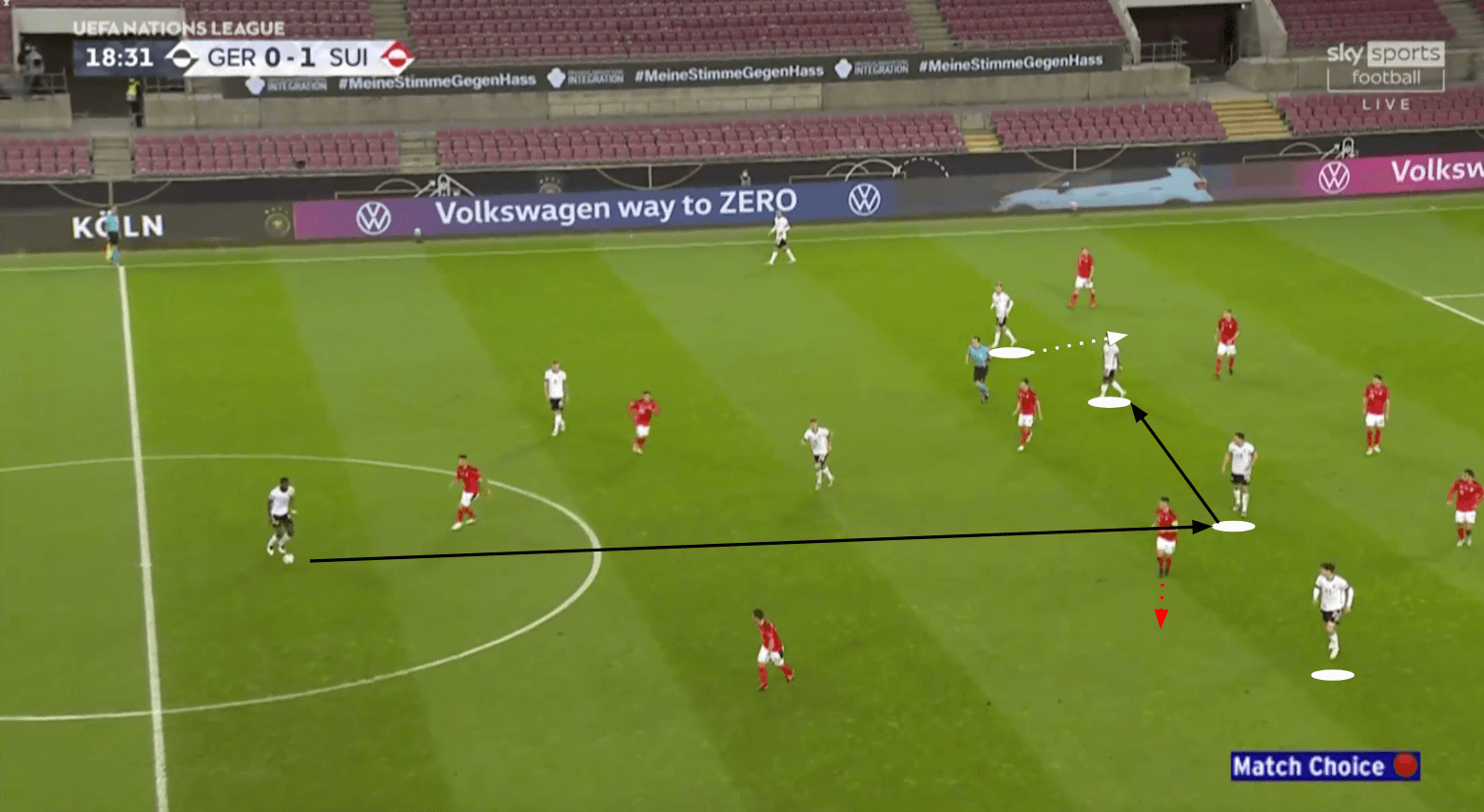 Rüdiger was able to zip a pass into the space to Gortezka’s feet. Goretzka just needed to move slightly to his right to get open because the man in front of him was goaded into shifting to his right due to Rüdiger’s disguise of his pass. This long pass and then layoff to Gnabry was wonderful in theory, as Timo Werner was able to get on this inside of his man and make a run through their defensive line. However, Gnabry was forced into an awkward touch because of Goretzka’s poor pass, and he wasn’t able to find Werner.

The positioning of the German players really allowed them to control the back line of Switzerland. They looked to do this in order to create numerical advantages. 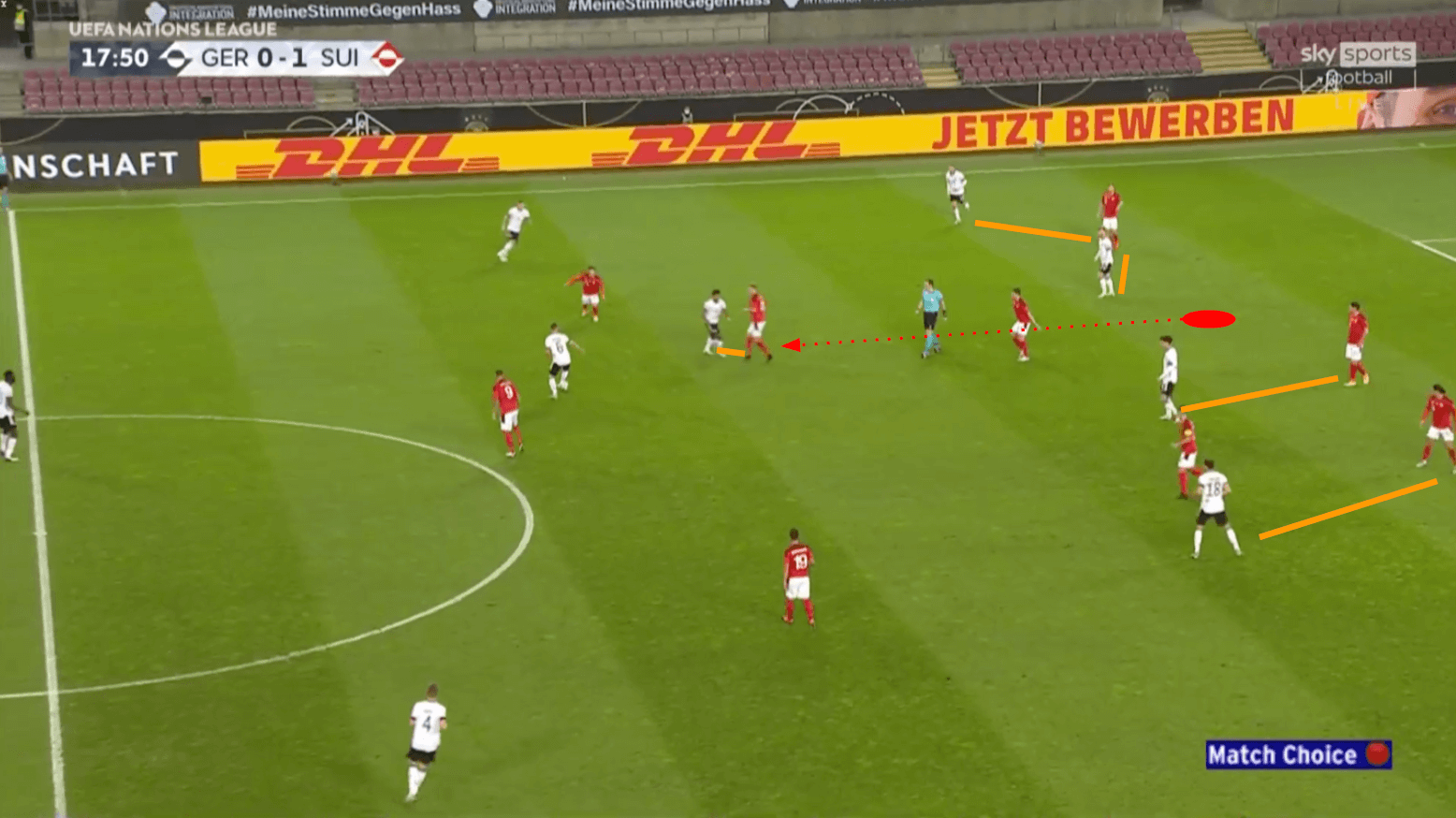 In the image above, it’s clear that the Germans were able to disorganise the Swiss. First, Gnabry pulls one of the three centre-backs out of position. This results in the other centre-backs being occupied with Havertz and Goretza, who are positioned in the centre of the pitch. Because Gnabry was followed up the pitch by the centre-back, a 2 v 1 was created with Werner and Gosens against Widmer. While the ball was ultimately played to Gosens, he didn’t receive it with the correct body shape, and his pass to Werner, while it was a through ball, led Werner away from goal and not towards it.

Germany continued to do this and was fairly successful in getting the initial pass into their players in between lines. 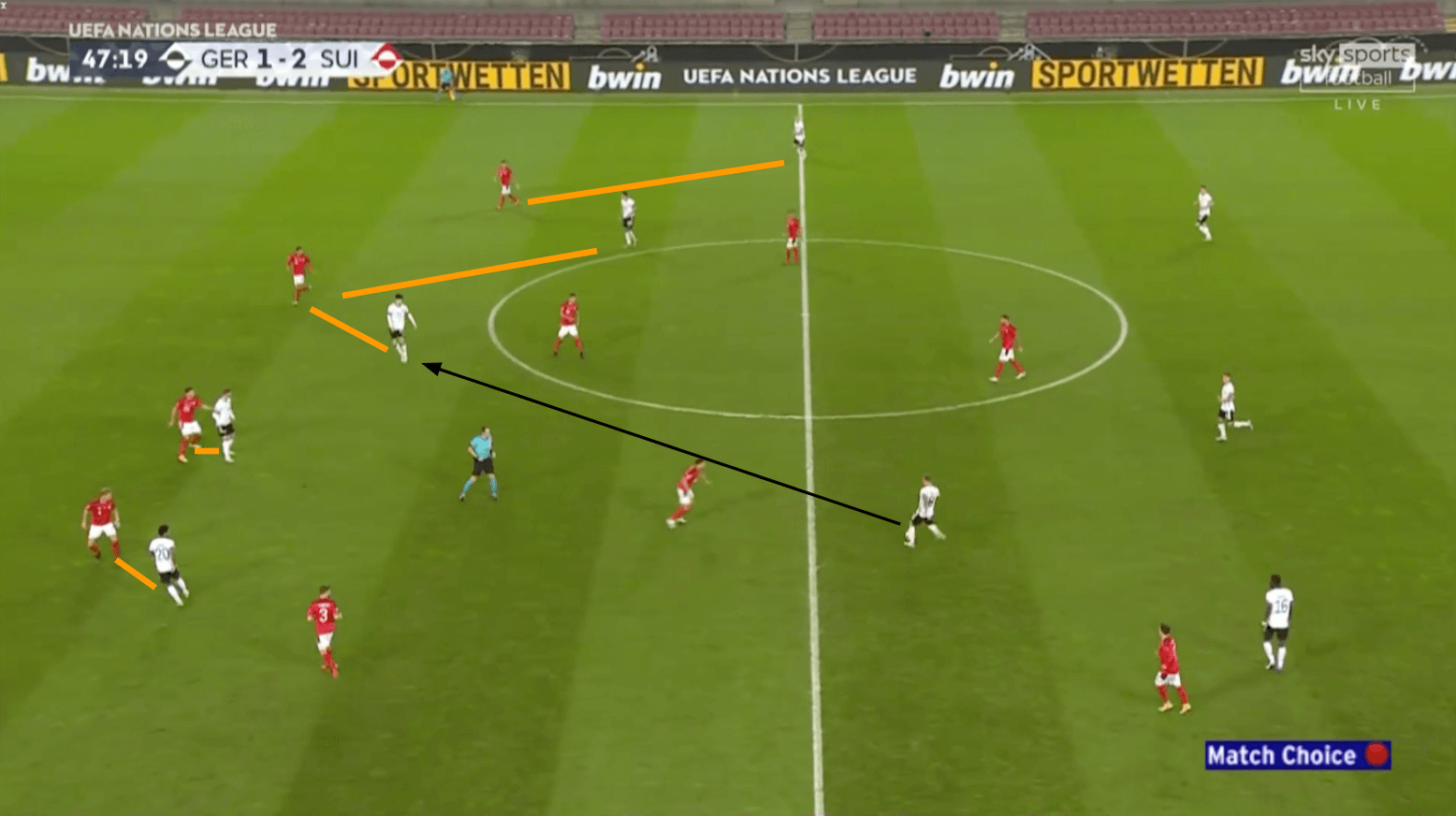 In the image above, Gnabry and Werner successfully ‘pin’ the two defenders on the left side of the pitch (Widmer wasn’t tracking back too quickly on this play). This leaves Switzerland’s left centre-back occupied with two attackers: Havertz and Goretzka. He cannot be supported by Zuber (the left-back) because Lukas Klostermann was pushing up the pitch and attracting Zuber’s attention.  Because Rodriguez cannot choose to pressure one of them, he had to stay put in his position. This allowed Kroos to ping a pass into Havertz who had time to turn and play a ball into Werner’s feet. While the shot ultimately went over the bar, Germany had done enough to overwhelm the Swiss and get men forward into the attacking third.

The result will definitely leave the Germans feeling particularly frustrated; on paper, they seem like the team that should have earned all three points. However, their struggles in defence allowed the Swiss to ultimately earn themselves a point. Switzerland still find themselves at the bottom of Group 4 in League A, while the Germans are in second place behind Spain. Players will have headed back to their clubs after the match with club football set to restart this weekend.