After kicking off their 2022 World Cup qualification campaign with a 1-0 win against Ecuador at La Bombonera, Argentina traveled away to face Bolivia. Hoping to make it two out of two and ending their curse at La Paz’s extreme conditions, the Albicelestes were up against a side hammered 5-0 by Brazil in their opener.

The curse did end at La Paz, as Lionel Messi’s Argentina managed to narrowly pull-off a 2-1 victory despite trailing at one point. In this tactical analysis, we’ll look at how Bolivia managed to put Argentina under pressure in the initial minutes and scored, and how Albicelestes used their wide players attempting to break Bolivia’s compact shape. This analysis will also look into how Argentina managed to get into the game effectively in the second half.

Bolivia started in a flat 4-4-2,with skipper Marcelo Moreno and Carlos Saucedo leading the attack upfront. Carlos Lampe started between the sticks, guarded by a back four. Rudy Cardozo and Diego Wayar made it to the Bolivian midfield yet again, supported by Alejandro Chumacero and Raúl Castro. 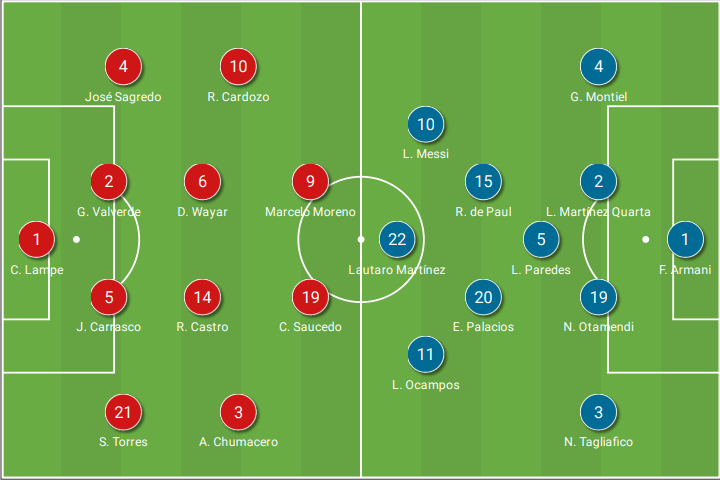 The Argentines made only one change in the lineup fielded against Ecuador as Exequiel Palacios started instead of Sevilla wing-back Marcos Acuña. Inter star Lautaro Martínez was accompanied by Barcelona‘s Lionel Messi and Lucas Ocampos upfront as PSG midfielder Leandro Paredes got yet another start in Lionel Scaloni’s side. Lucas Martínez Quarta teamed up with Nicolás Otamendi to complete the centre-back duo.

Bolivia’s build-up: overhaul and use of width

Bolivia’s build-up was largely focused on overhauling the midfield and progressing from the side-ways. Argentina did not seem to press higher and Bolivia were allowed to play out from the back. 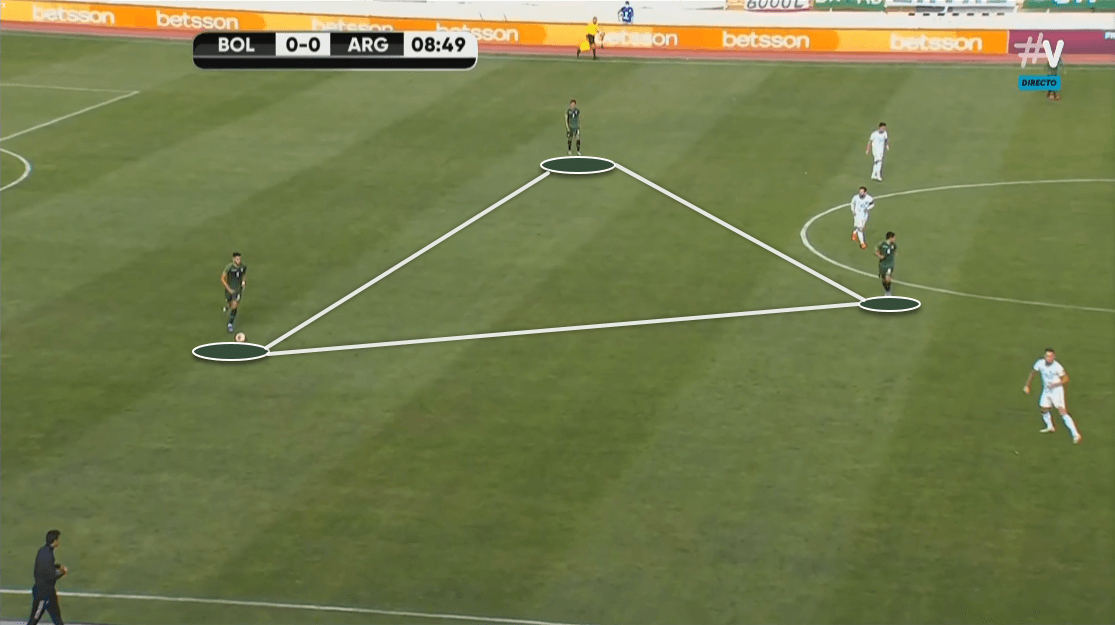 As we can see in the instance above, the central defensive midfielder, Wayar is seen dropping deep to receive the ball from two centre-backs. Occasionally, he placed himself even ahead of the first line of press to maintain the triangle. As a result of the freedom and Wayar’s positioning, the central defenders were able to spot and pass to the wing-backs to progress the ball. 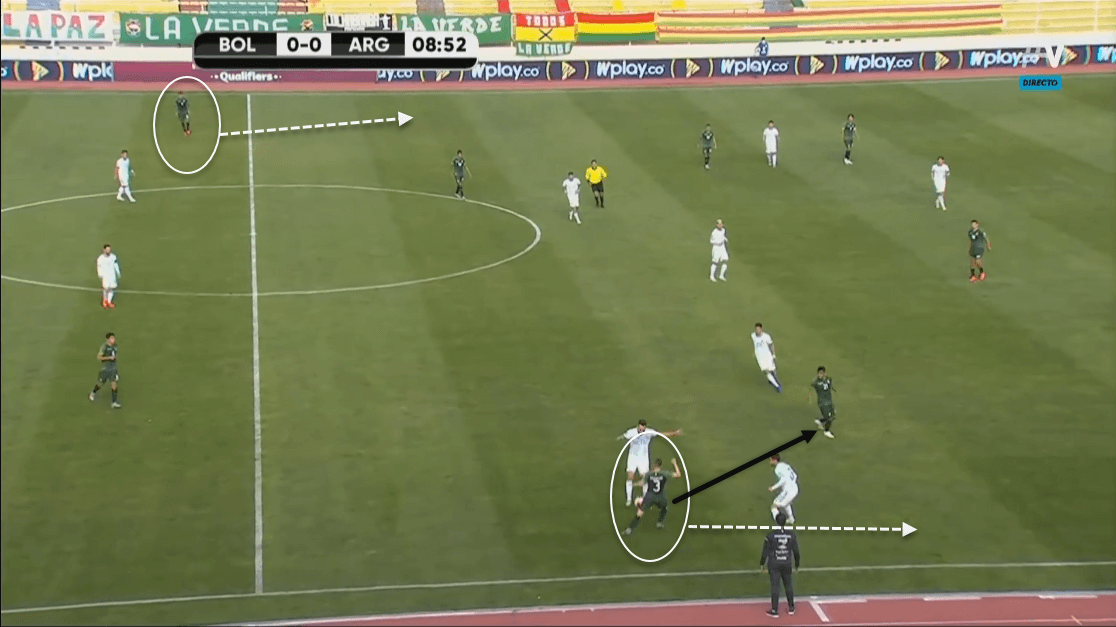 The instance above shows how Chumacero opts to play to a central player after receiving the ball from Carrasco. Bolivia’s full-backs pushed forward more often, and were positioned in the midfield during the build-up most of the time. This created a 3-5-2 shape in the build-up, which aimed at overhauling and winning balls in the midfield. 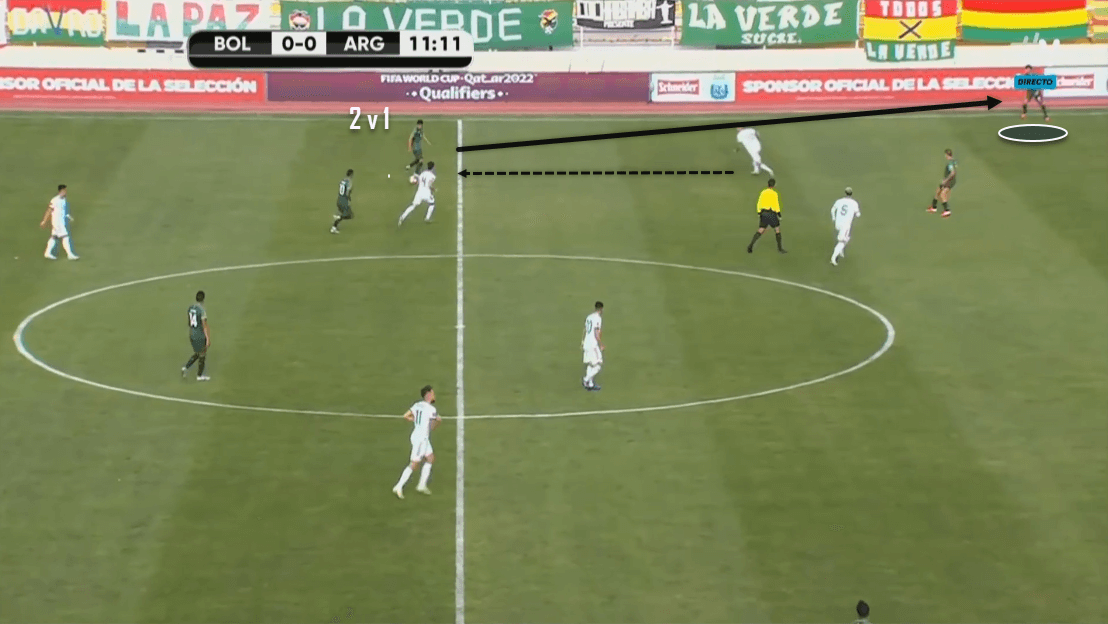 A good example of how Bolivia achieved small sections of overhauls can be seen above. Playing with five men in midfield with the ball, the central midfielders drifted outwards to help the full-backs progress. This approach worked as well, since Bolivia were able to land balls to run-making wide players. 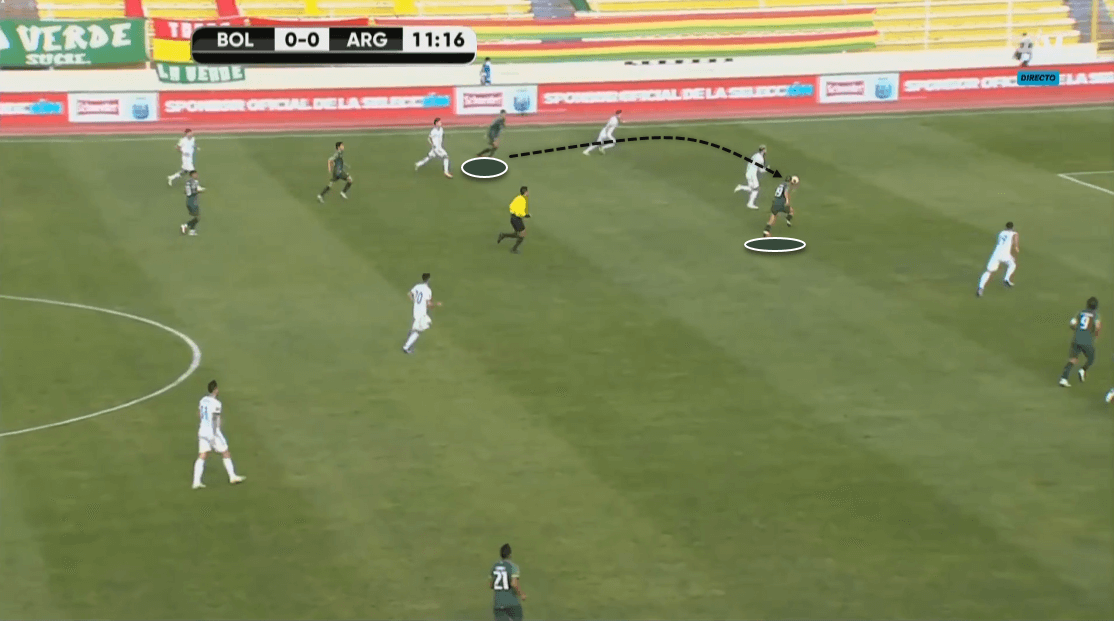 The transition from build-up to attack was simple, yet efficient from the hosts. The wide player would then drift and unlock either one of Saucedo or Moreno, both of whom were pinned outside of the opposition’s box to receive the ball in space.

This approach of carrying the ball to progress it and winning it frequently with midfield overhaul allowed Bolivia to enjoy a fair share of possession, as they managed to keep 56% of possession and completed 453 passes compared to the Albiceleste’s 335.

Argentina’s build-up was not based on possession like their opposition, as Armani was instructed to launch long balls instead of using central defenders to progress. However, Argentina used their midfielders, Paredes and Palacios to progress the ball from Bolivia’s first line of press. 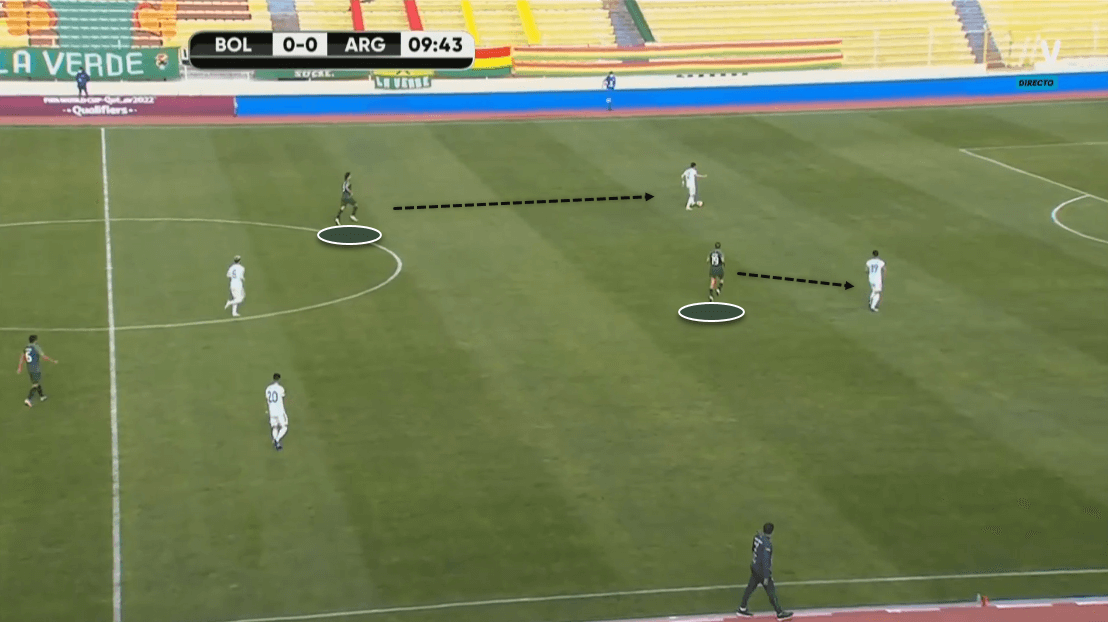 While the two centre-backs are being pressed by the opposition strikers, both Paredes and Palacios are seen dropping deep, separating themselves from the shadows of both the pressing forwards. This process was smooth for Argentina with the side being able to progress from the first line of press.

Once Paredes or a player behind the first line of press got the ball, Argentina’s approach varied as they tried out various versatile approaches to unlock the Bolivian block. 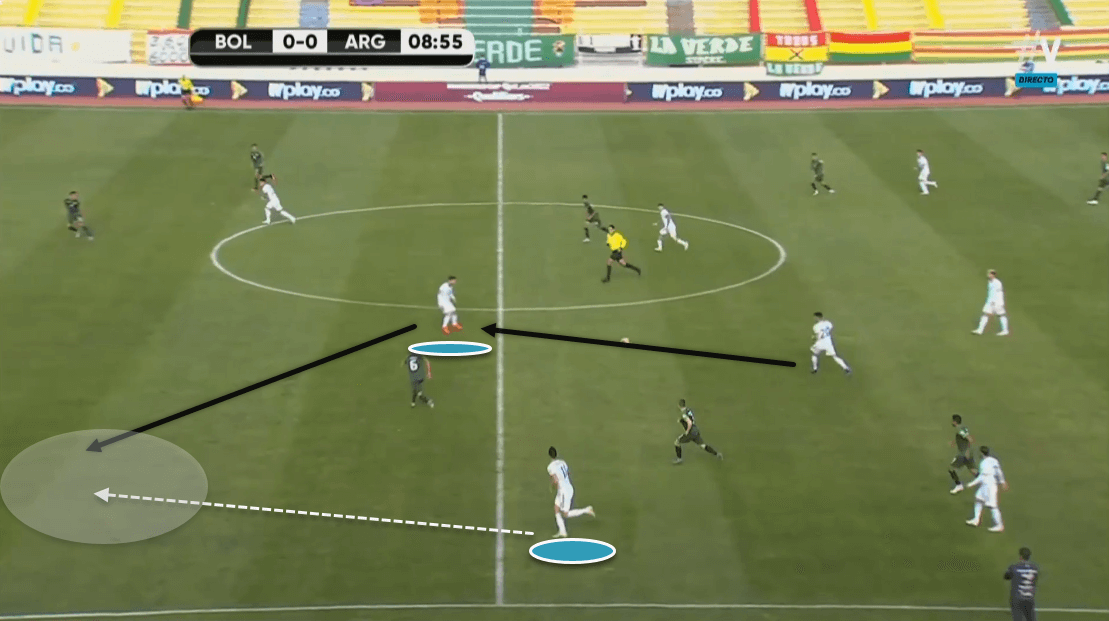 Since Bolivia’s advancing full-backs left spaces for Ocampos to run into, Argentina tried to utilise the wide left to land balls for Martínez. In the instance above, Palacios receives the ball from Paredes and passes it to Messi, who is placed centrally in this instance. With a quick turn, he spots Ocampos’ run and is able to pass him to run into space.

Instances like these were common when Argentina won the ball in midfield, as well as when they tried to build-up in a more relaxed manner. 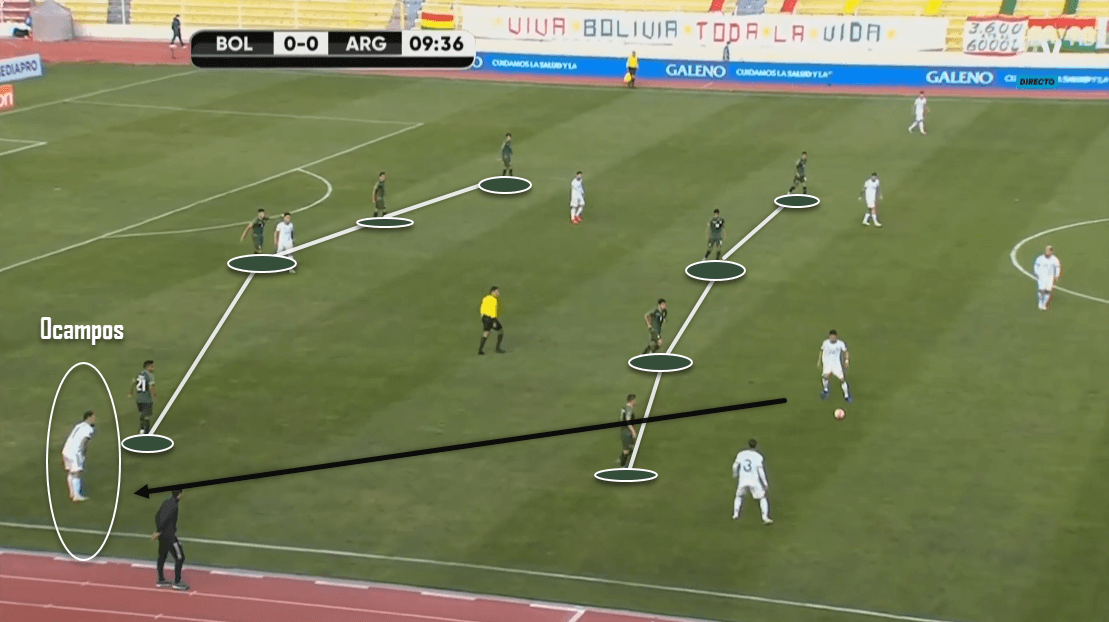 Argentina had wide areas free to advance the ball throughout the match. With multiple lines of four players to break, Argentina preferred to use wide areas upfront, between the lines. As a result, players like Ocampos and Gonzalo Montiel stayed wide and alert to make runs. Montiel performed run-making duties at the right because Lionel Messi was seen taking a more central role to contemplate and make spaces for Martínez. 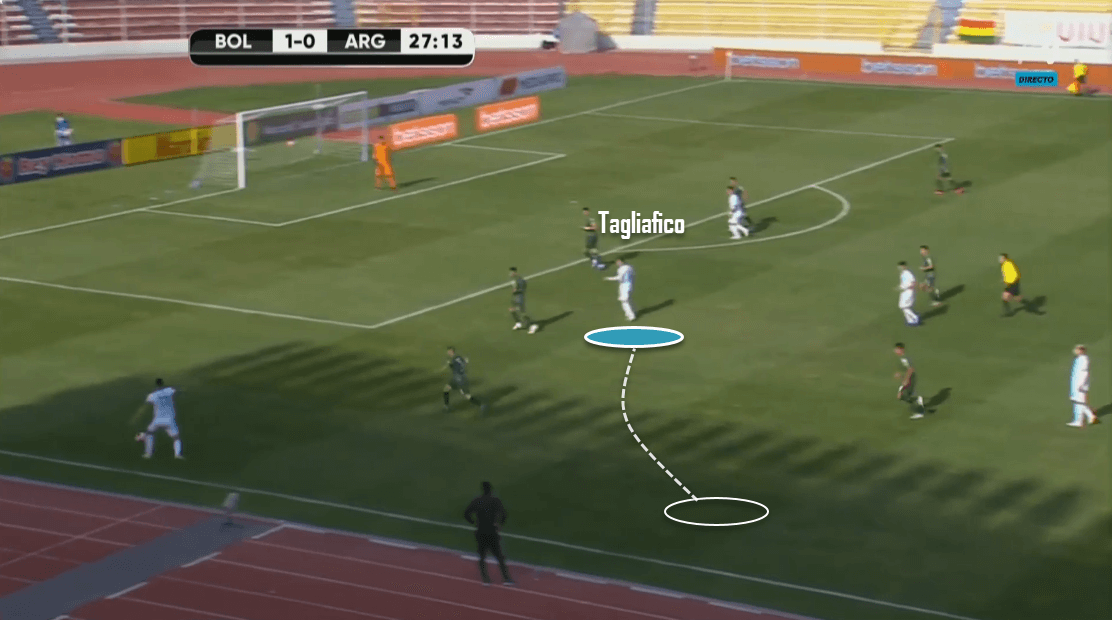 While Ocampos was placed wide, Argentina made sure the half-spaces were covered well to transit the ball from wide to centre by inverting players on several occasions. In this case, Nicolas Tagliafico, the left-back is seen making an inverted run through half space to occupy the Bolivian defence and maintain the pressure at the same time.

Here’s yet another instance of how Argentina emphasised exploiting wide spaces via a direct approach. 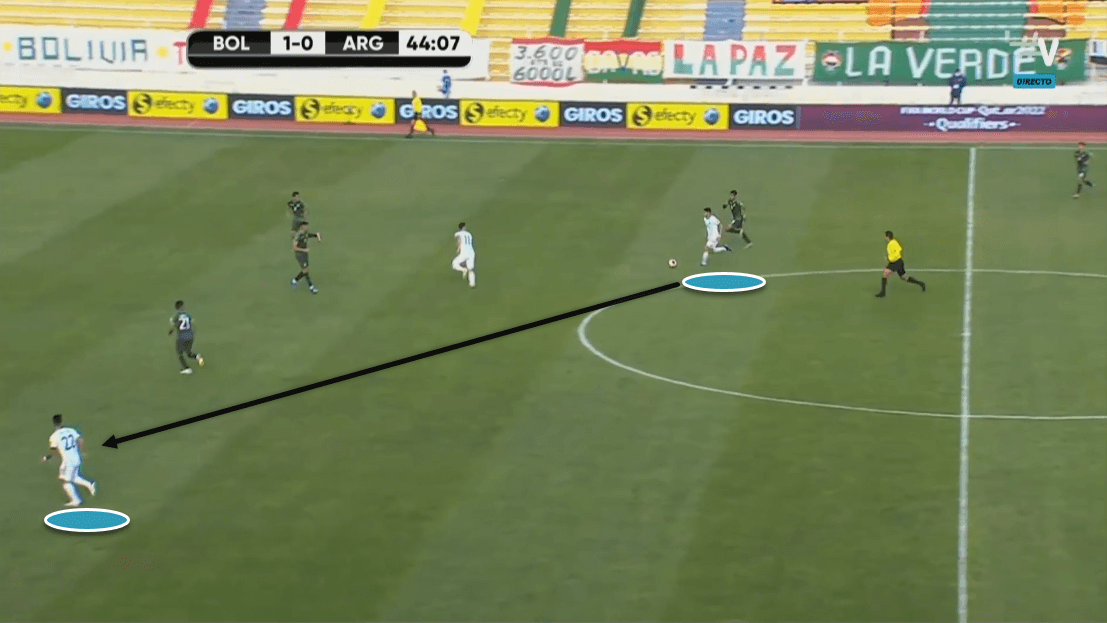 While Bolivia’s 4-4-2 seemed to be a rigid structure, their tendency to leave spaces while building up left them vulnerable to these kinds of runs.

Another tactical trait that Argentina hugely demonstrated was the use of Paredes to exploit wide space between second line and first line of opposition press. As a deep-lying midfielder, Paredes was positioned between the huge space between Bolivia’s line to play into spaces. 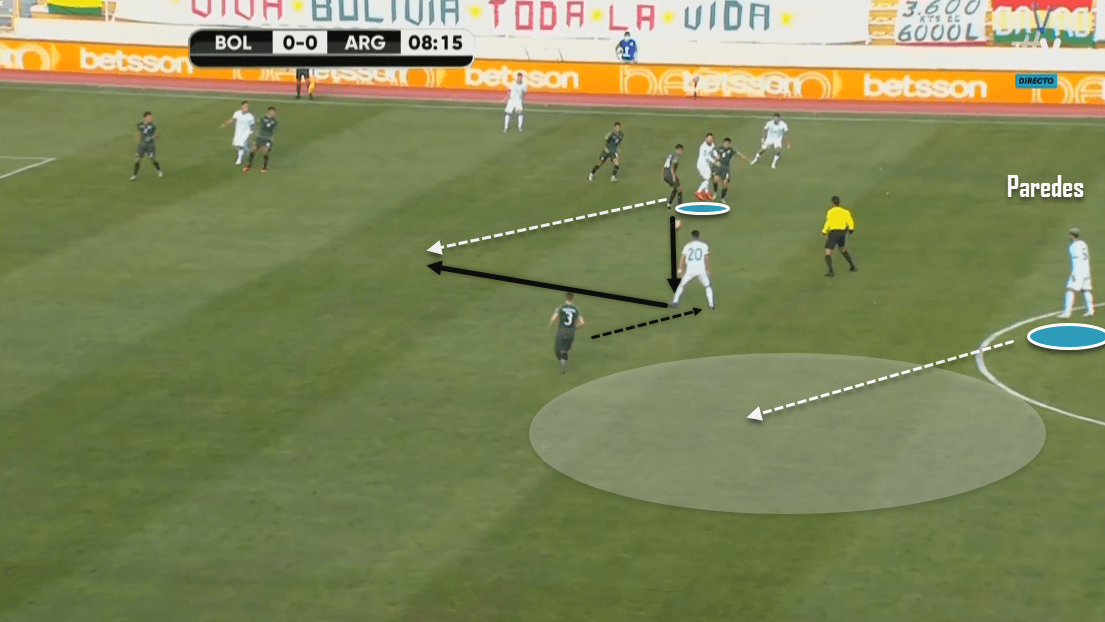 As we can see in the above example, Bolivia have left a huge opening towards the middle. A combination of passes between Messi and Palacios allows Paredes to drift into space for Messi to spot him. This sequence continued for several times during the whole match, and was prominent during the opening minutes. 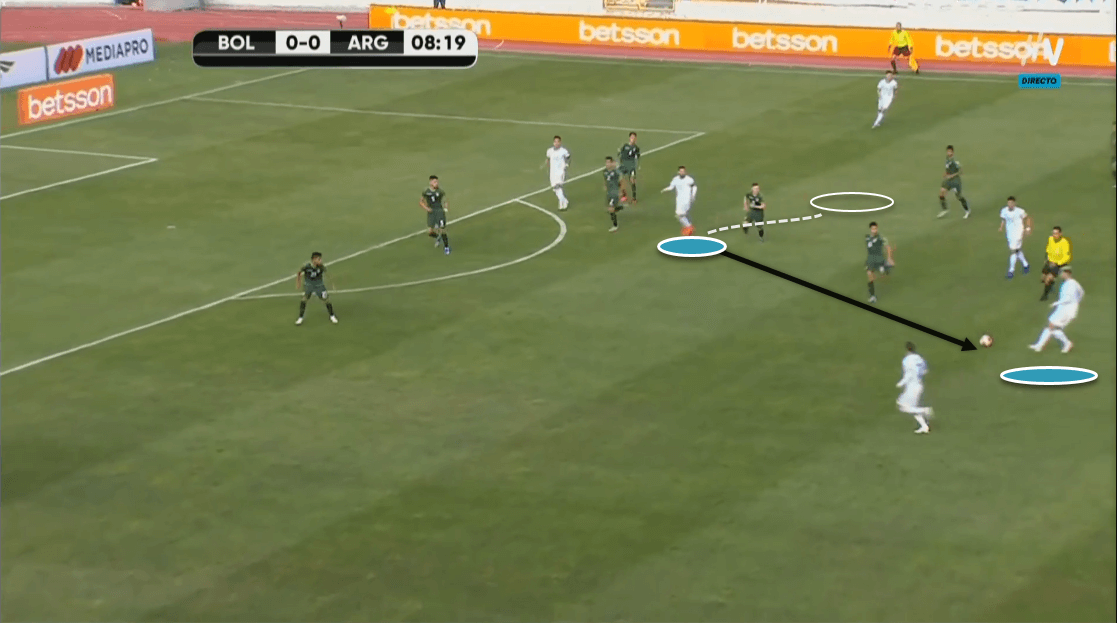 The above example, in the eighth minute, resulted in a shot from Paredes that hit the woodwork. Paredes was able to register four shots from outside the area, which allowed Argentina to register shots at opposition goal despite being under pressure for the initial minutes in La Paz.

Bolivia managed to get the better of Argentina in the opening 30 minutes of the match, as they continuously posed threats in front of goal and ended up taking the lead. They took the most out of Argentina’s attempts to play a relatively direct long ball from the back, and won first balls to start the attack. 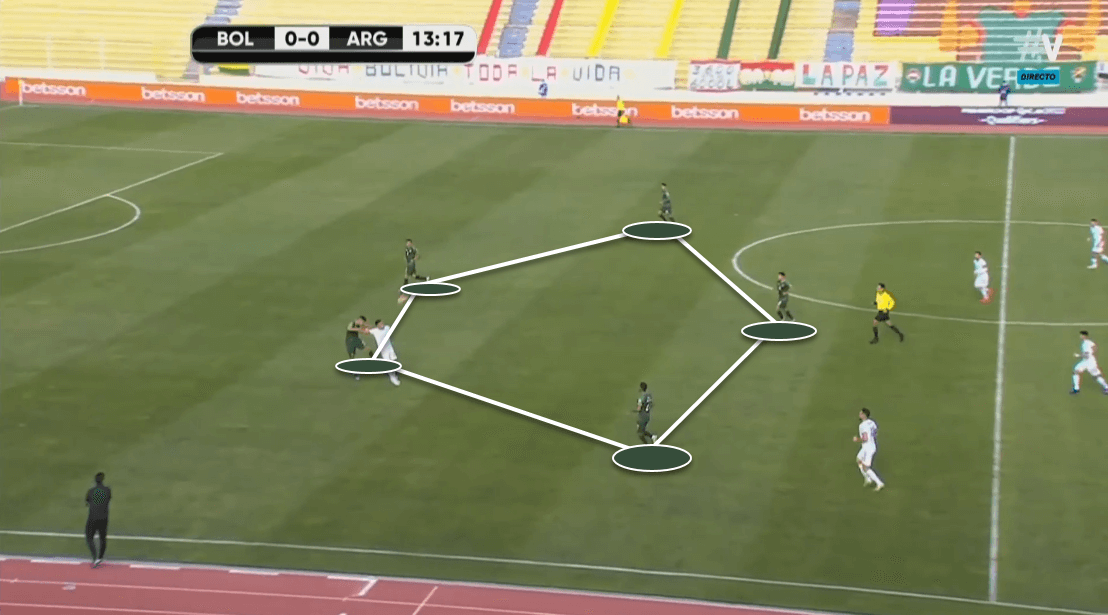 In an instance from the 14th minute, we can observe two things: Bolivia’s shape to recover the first ball and Argentina’s lack of presence to pressurise the opposition’s defence line. Argentina struggled to cope up with this, as their approach was more focused towards minimal work off the ball. Hence, Bolivia ended up winning these balls and with other men surrounding the ball winner, they made the most out of these to progress. 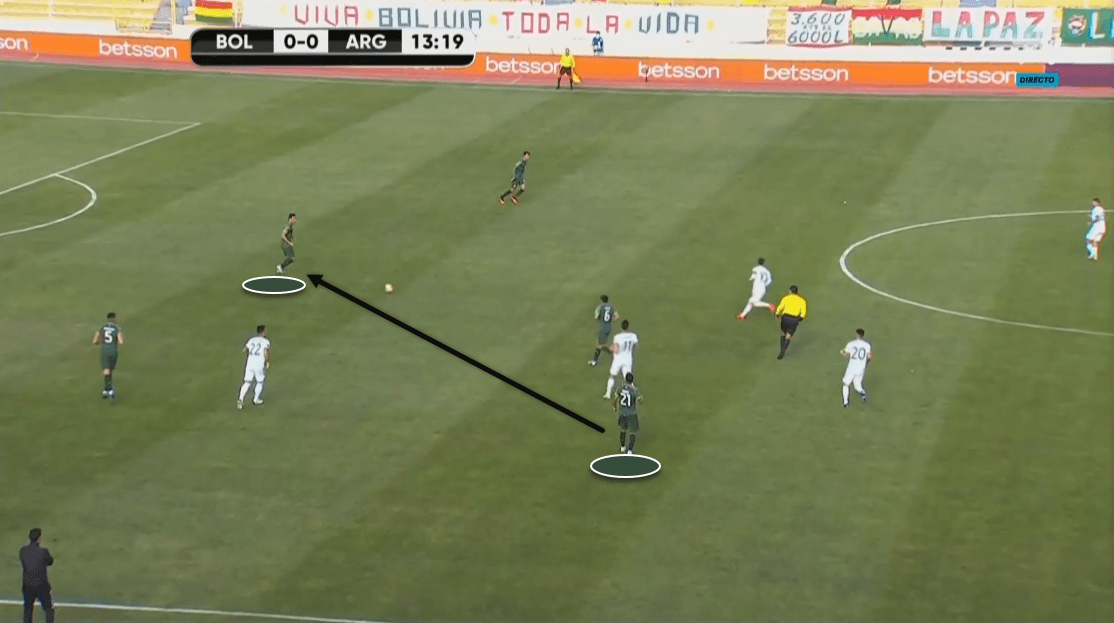 After winning the first ball, the Bolivian approach was centred around the use of centre-backs to find advanced players, a method similar to their build-up approach. 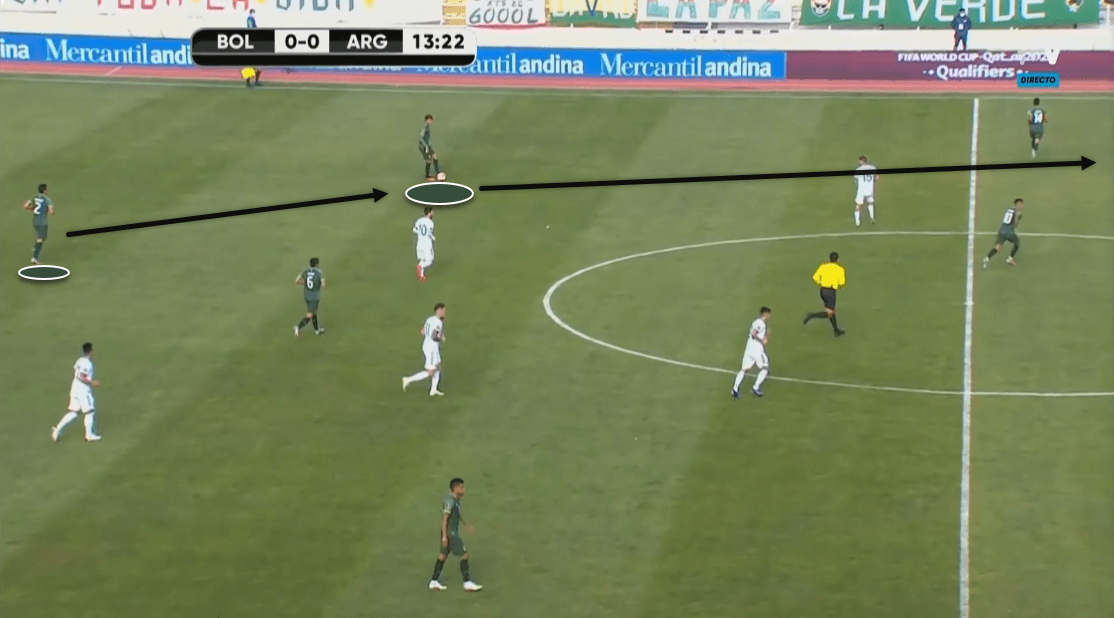 The sequence progresses with the wide player receiving the ball from the centre-back to distribute it to run-making midfielder, as shown in the figure. Another thing to notice here is Argentina’s off-the-ball shape is roughly unchanged, and they look to be prepared to defend in numbers rather than counter-pressing to recover the ball. 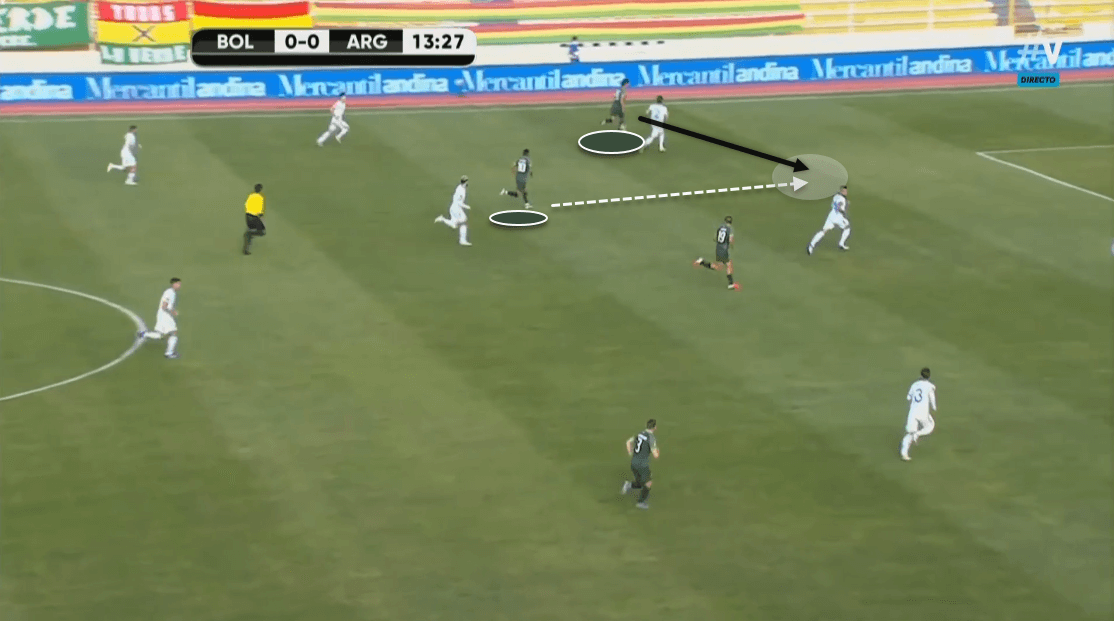 Hence, lack of mobile movements meant Bolivia were left with patches of space left between the Argentine players, which they used to pass or make runs into. In addition, this approach for the initial minutes seemed to be too good for Argentina to handle and Bolivia ended up with seven shots in the first half, with a goal later neutralised by Martínez’s strike.

Take a look at Bolivia’s shape during to win the first ball in 14th minute yet again and compare the instance with the following. 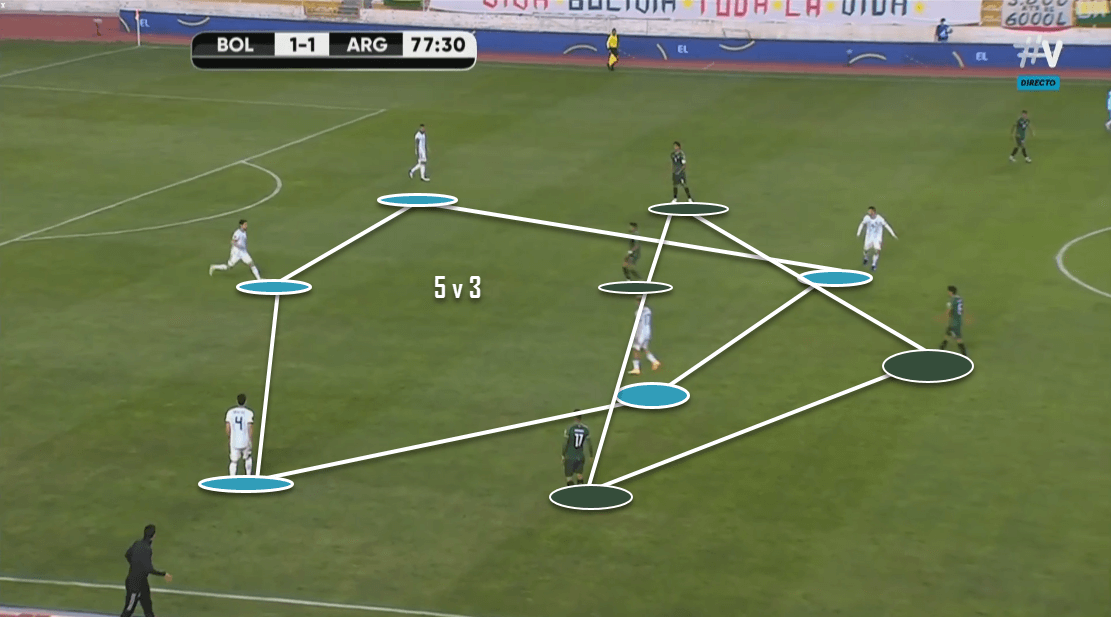 This was later in the second half, taken just after Argentina won the first ball off Franco Armani’s kick. While at the first instance Bolivia looked to be in control, Argentina tweaked their tactics to overhaul the first ball situations and win the ball to create chances from them. The 5v3 advantage allows them to have more options, and ultimately were able to find players in apt positions. 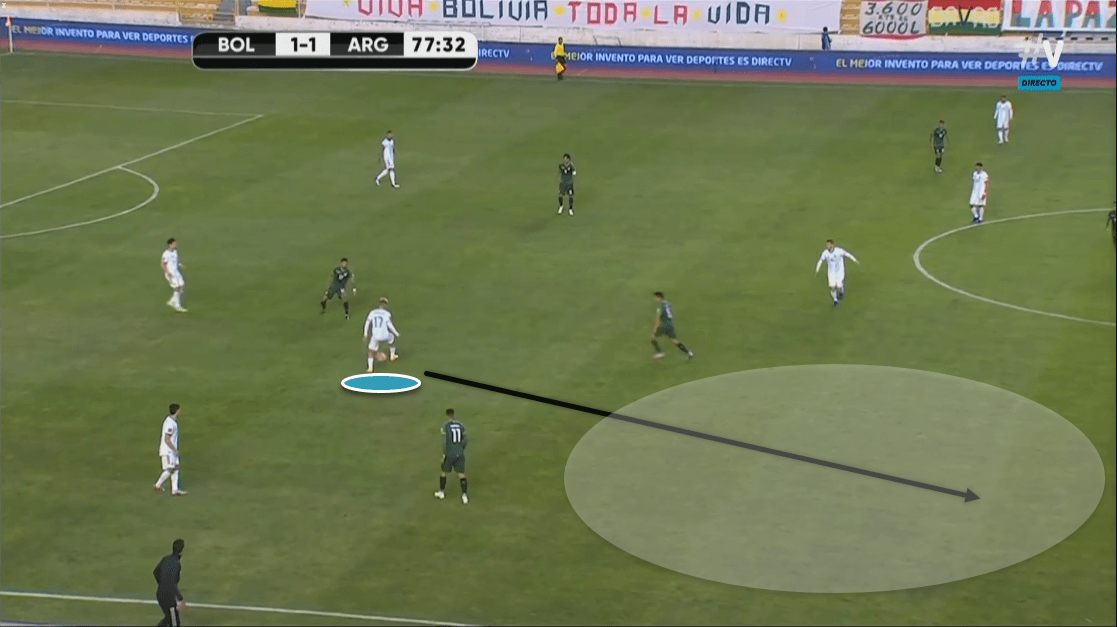 Just as they won the first ball and used their centre-backs to distribute, Argentina then could sense the space created when Bolivia attempted to break the numerical superiority. Like we can see above, passing into space is more convenient as compared to the shapes seen in the initial minutes for Argentina. 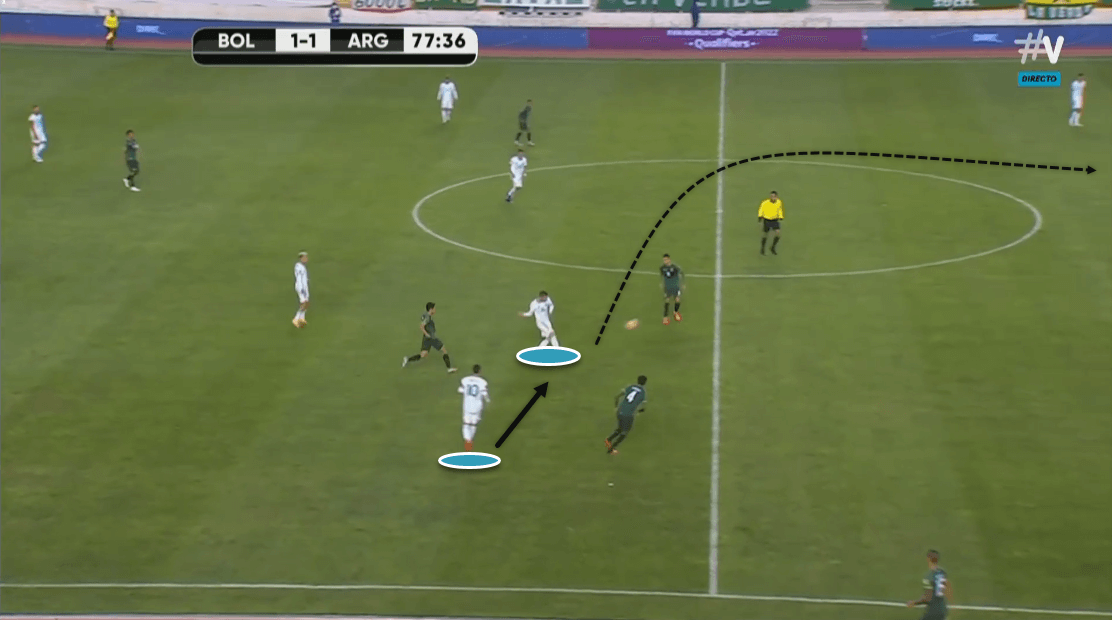 As a result, Argentina’s off-the-ball positioning looked better, and adopted a more fluid and low-risk approach. The above instance shows just that – Messi’s positioning to drop down for supply and the distribution into advanced space look more practical. In this way, Bolivia’s dominance, hugely based on Argentina’s lack of work and positional woes were later dealt in a good manner to win the match 2-1 eventually.

After neutralising Bolivia’s lead with a goal that was largely based on Martínez’s commitments before the first half, the Albicelestes displayed a comparatively better gameplay in the second half. Making the most out of their players isn’t just there yet, but Argentina’s second goal was a testament to the in-game tactical tweak that we talked about in the analysis above. While Argentina will be happy to have finished their first spell of World Cup qualification matches with a 100% record, Bolivia will be disappointed to have lost at their fortress for the first time since 2005 at the hands of Argentina.