From the EPL to the QNB Stars League, the 2020/21 summer transfer window was a tricky one. Clubs in Asia resorted to spending money on vital signings only, and Al-Khor SC sought out to do the same. Considering their attacking lapses that saw them finish 10th in QNB Stars League last season, they’ve signed Yuki Kobayashi from the Belgian club Waasland-Beveren.

In this tactical analysis, we’ll look at the general attributes of Kobayashi, his individual tactics, and an analysis of his play. In addition, the scout report will explore his compatibility in László Bölöni’s side.

Positioning – where does he fit? 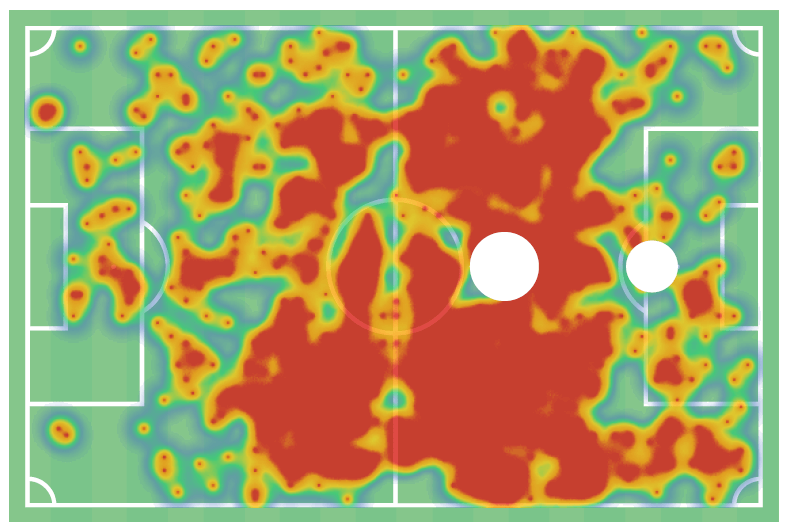 Al-Khor have been a side that preferably opt for a 4-2-3-1. However, the beginning of this season has seen them change into 4-4-1-1, 3-4-2-1, or a 5-3-2, primarily against former-Barcelona man Xavi’s Al Sadd. Seeing Kobayashi’s previous club and how he was positioned, the 4-2-3-1 looks to suit the Japanese. He can either start off as a central midfielder, guarded off by two other wide midfielders or a left-attacking midfielder that drifts towards the centre. 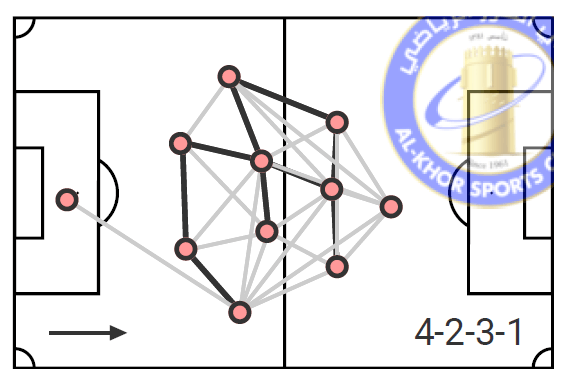 If we look at Al-Khor’s general structure and Kobayashi’s heat map at the same time, Kobayashi’s presence at his own half might also be an asset. The Japanese can be a link between the double pivot and advanced players upfront, which we’ll discover as the analysis progresses.

Kobayashi and his space coverage

Kobayashi’s style of play is hugely influenced by his ability to occupy and play around spaces. Generally, he is smart enough to move into deeper spaces to reclaim the ball, or even to contribute in the build-up. The main reason behind his preference towards the central area is because of spaces that he finds. 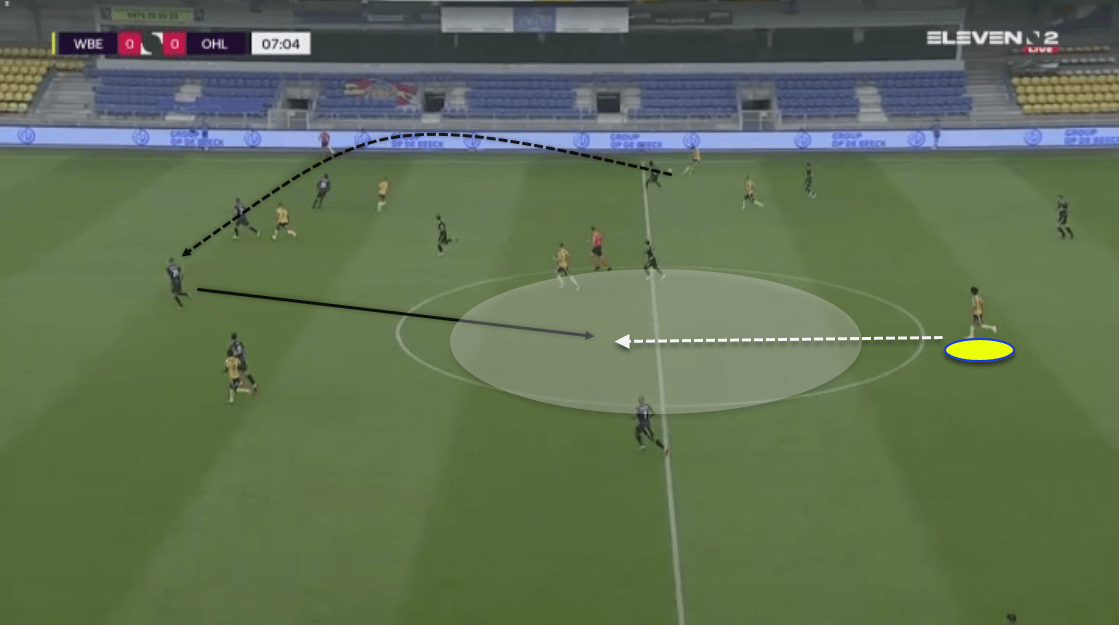 As we can see in the instance above, the central area is relatively non-occupied, and Kobayashi positions himself to receive a loose ball. This very trait of him makes him a hardworking player, one that continuously looks to manipulate spaces all around the pitch.

Similarly, Kobayashi prefers to get himself involved in the build-up by reaching out to spaces in his own half, as far as going on to the defensive line to look for spaces. One such instance is shown below: 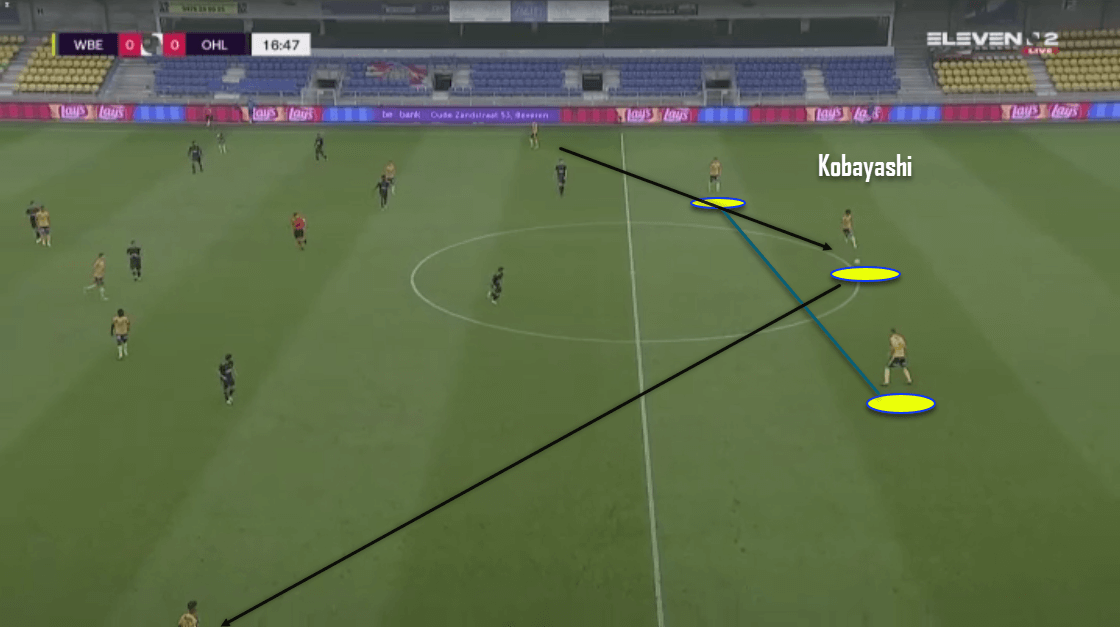 The instance shows Kobayashi dropping deep and occupying the space created by wide-drifting centre-backs. He is seen occupying the space, more like a defensive midfielder and switching plays from one side to the other. This type of movement in space is seen all around the pitch when Kobayashi plays.

Now the big question is, how can Al-Khor SC make the most out of Kobayashi? Will his space coverage and movements help them perform better? Let’s look at it.

Taking a look at one instance from Al-Khor SC’s fixture against Al-Ahli, we can see Al-Khor’s weaknesses of not being able to spread the play via interchange of passes. This happens because of poor positioning towards the centre. 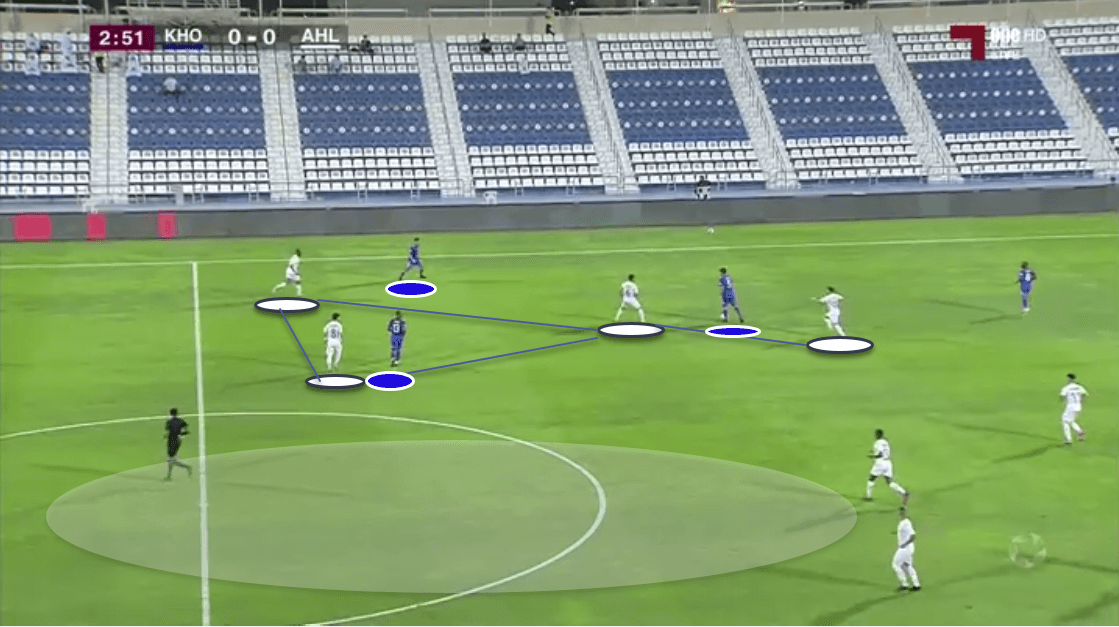 When the direction of play is congested within a single area, in this case towards the right, oppositions can easily overhaul and win the ball. Presence of a player in space towards the centre could’ve made a difference in this case. Kobayashi, with his sense of space and workrate, seems to be a good signing if he is used smartly.

Al-Khor’s problems of poor occupation is apparent almost everywhere on the pitch, making them predictable and inefficient at the same time. The problem appears in the build-up, as well as when they set out to attack, like the following instance shows: 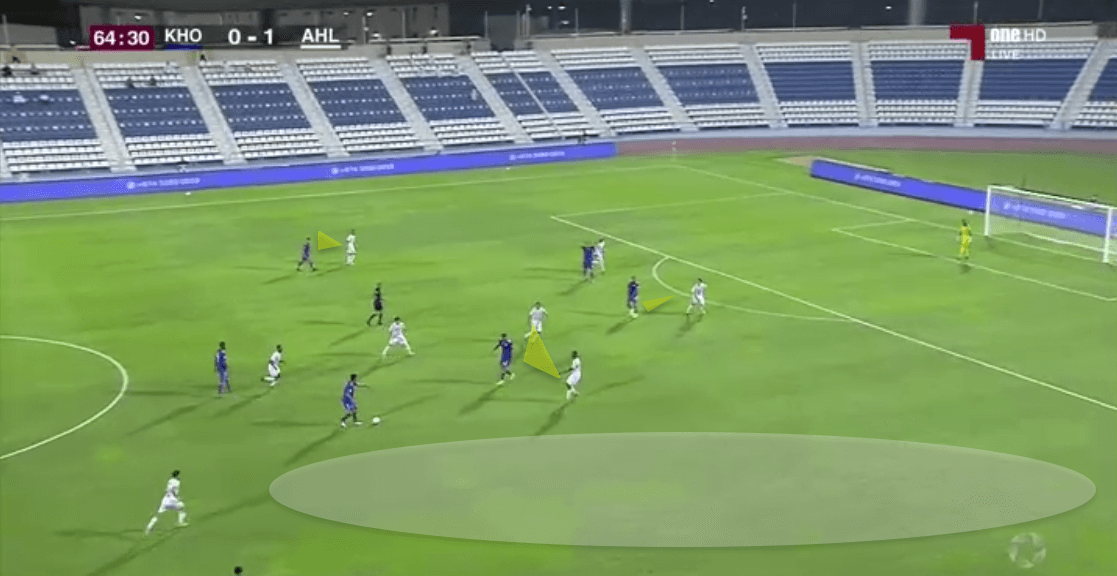 All Al-Khor players are occupied by the opposition players, and the space towards the ball carrier’s right is vacant. Although a player is seen making a run towards the space, it could be too late for Al-Khor to drift wide, as an opposition close to the space can easily block the lane. Presenting himself in the right place, at the right time is Kobayashi’s biggest strength, which we can expect to see a lot at Al-Khor.

Ability to link-up and create chances

Being an attacking midfielder that like to move both vertically and horizontally, Kobayashi possesses ability to find players to link-up and set-up chances. Al-Khor lack a player that can actually do that with creative passing and player detection.

Kobayashi’s major strength is finding spaces to position himself ideally for passing. He does this by manipulating his movements according to the opposition’s defensive structure. He’s often seen making delayed runs to create chances when his teammates are inside the box to receive and shoot. 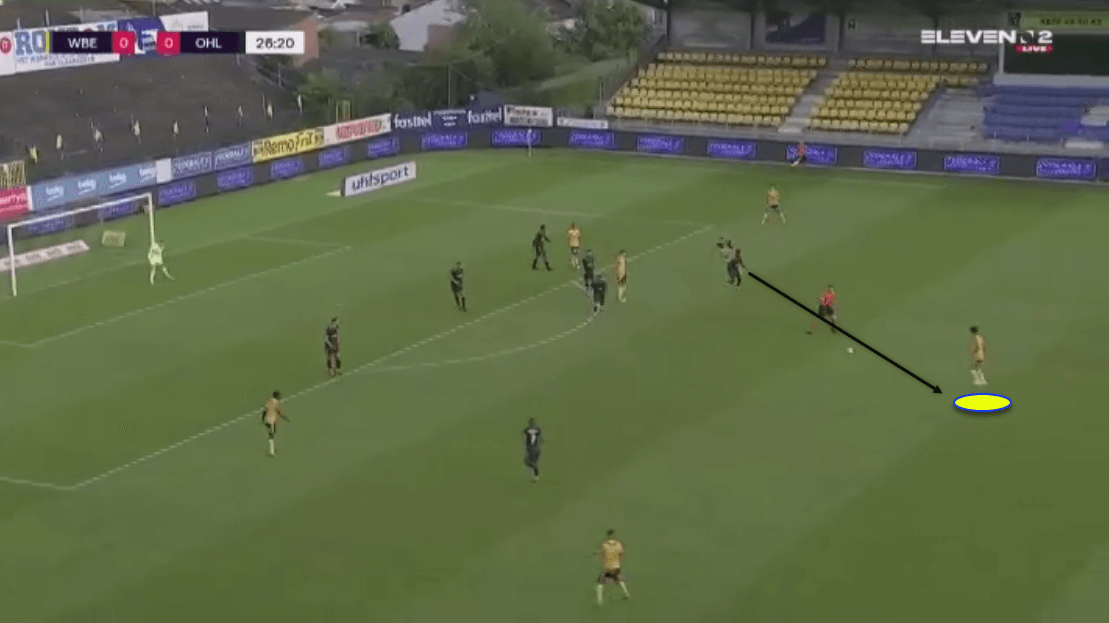 In the above instance, Kobayashi is seen making use of the space created towards the centre by delaying his run. For an attacking midfielder, the ability to make runs just outside of the box to serve either deliver a lofted ball inside the box or to spread play is vital.  Kobayashi is versatile enough to execute both, as we can see in the examples below: 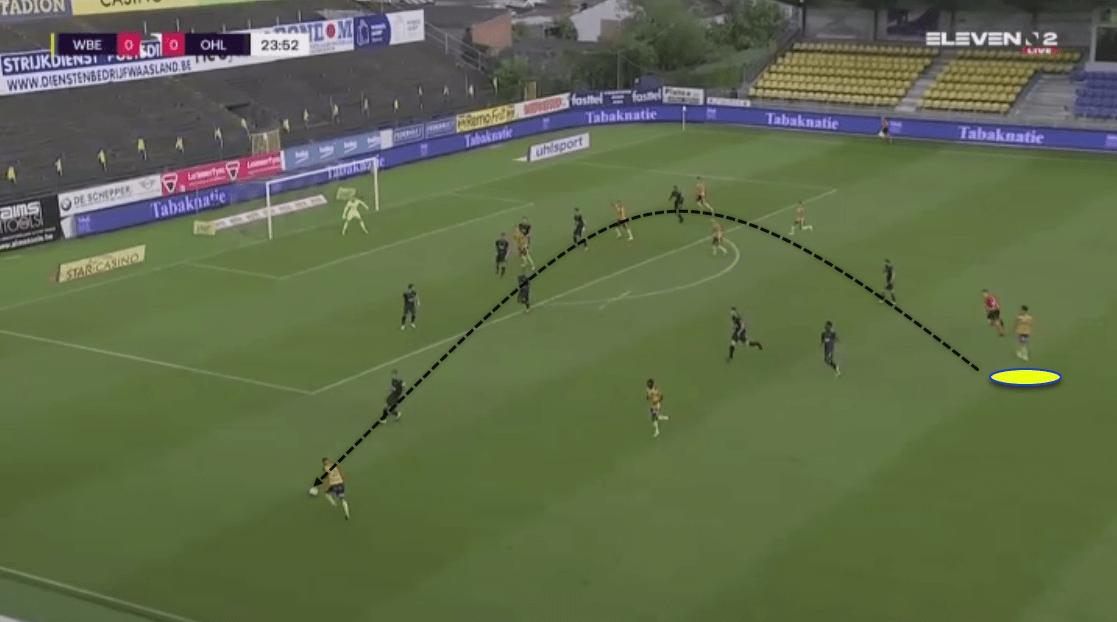 In one instance, Kobayashi receives the ball in a similar position and passes it to the wide player, who then has space to make runs forward and deliver a cross. This is a relatively indirect approach, but Kobayashi’s ability of detecting free players is on display here.

In another similar situation, Kobayashi instead goes for a direct approach that can yield a higher reward: 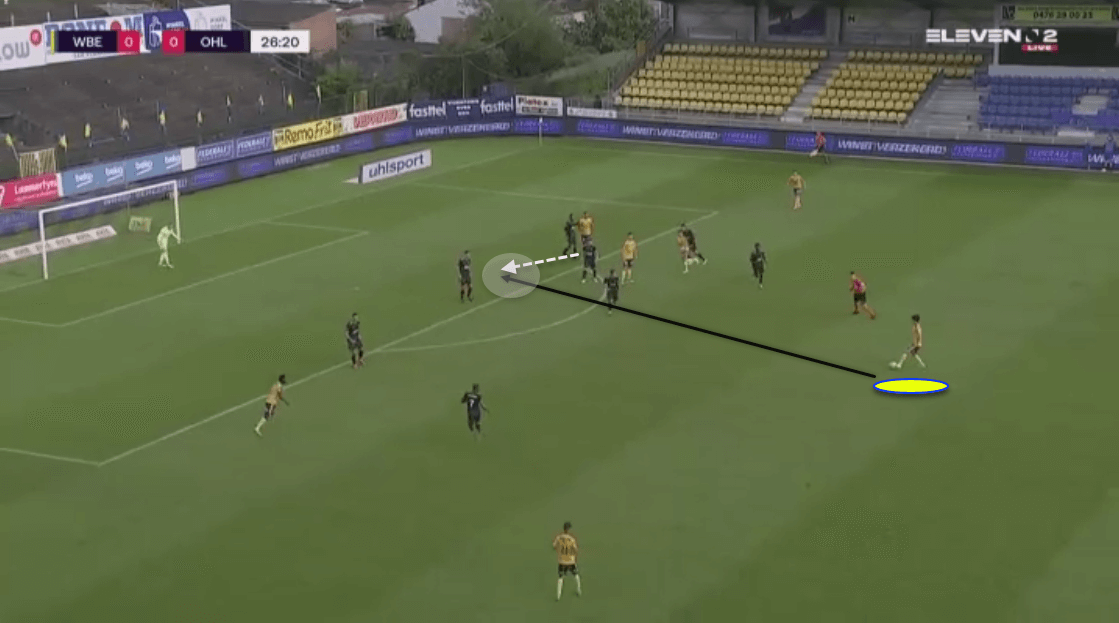 As we can see, Kobayashi spots a forward making run behind the defence and capitalizes the tight channel that he sees. In this way, he can also be a lethal passer that can unlock forwards inside the box.

His versatility will come handy for Al-Khor, as the side struggles to maintain connections in the final third. Let’s pick an example, this time with Al-Khor’s passmap against Al-Ahli. 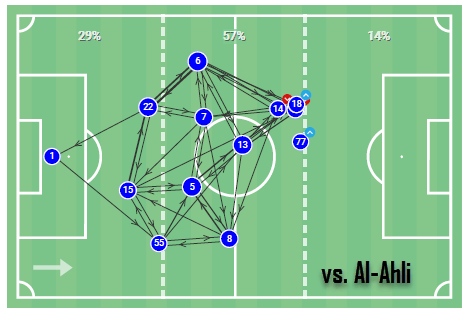 The density of passes get very low as Al-Khor move ahead, due to the lack of a player who can ideally serve a run-making forward or a player in space. Now that we’ve seen what Yuki Kobayashi has at his disposal, we can expect him to be involved in the improvement process. His passing sonar indicates his ability to distribute the ball either ways, both vertically and horizontally. 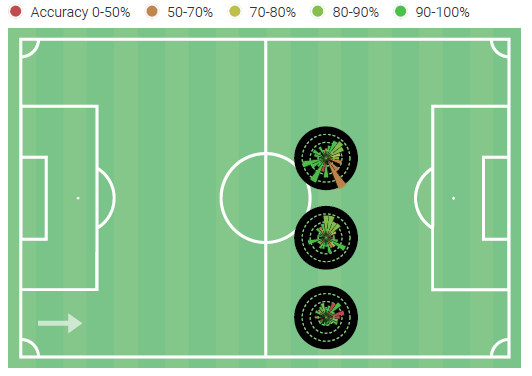 Al-Khor have a player that can solve both their creativity and link-up problems at an individual level. However, Kobayashi was rarely used in the Jupiter Pro League, and the frequency of playing time will determine his efficiency in Al-Khor’s build-up and attacking transitions.

Kobayashi not only relies on his passing, but makes runs whenever his team attempts a counter-attack or a quick transition. With an exception, he makes advanced runs when he is placed on the receiving end. This makes him an attacker that can move off the ball to disbalance the opposition. 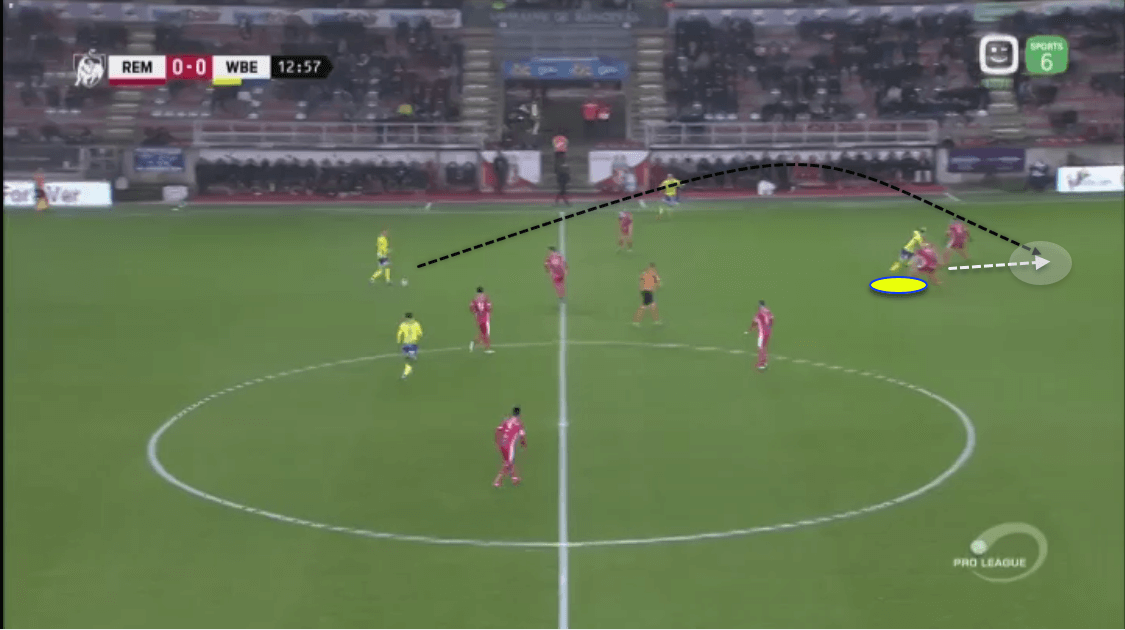 The above instance is a perfect example of how Kobayashi sets himself up. Starting from the left, he carefully makes his way past two markers, and anticipates the lofted ball towards his front. He eventually receives and is able to capitalize on the chance with a cross.

However, the Japanese thrives in counter-attacks, when he has to make diagonal runs to get into space of recovering opposition defence. 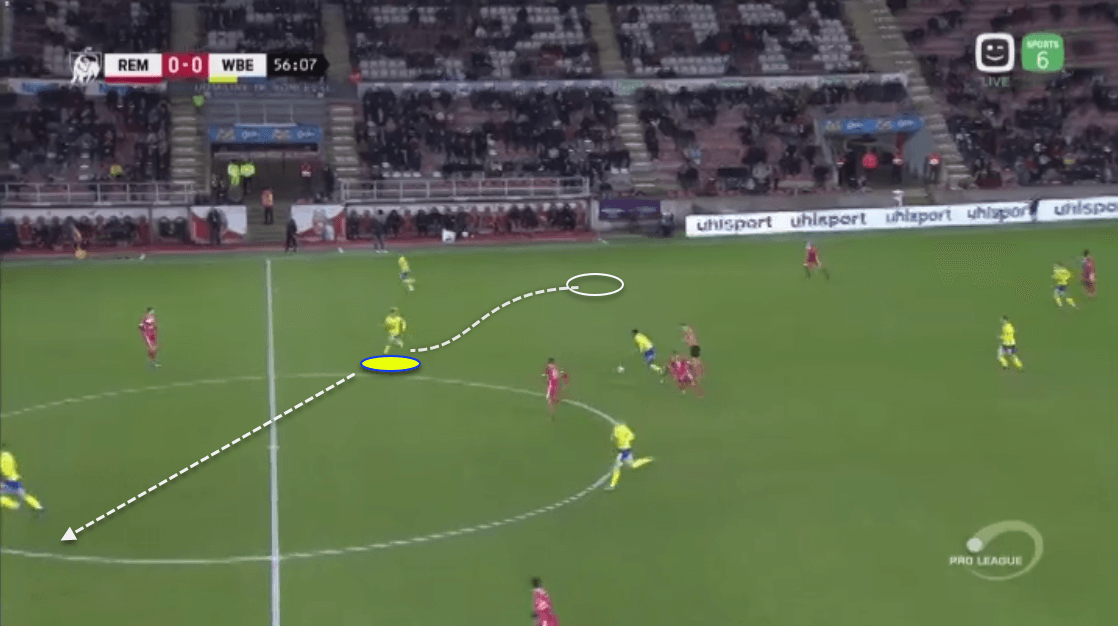 Take this one for example – Kobayashi makes a diagonal run, intersecting the path of the ball carrier on the process. The ball-carrying player heads towards wider side, while Yuki cuts inside to be at the receiving end. The end of attack sees him at the opposition box, smartly getting behind the opposition defence with a blindside run. 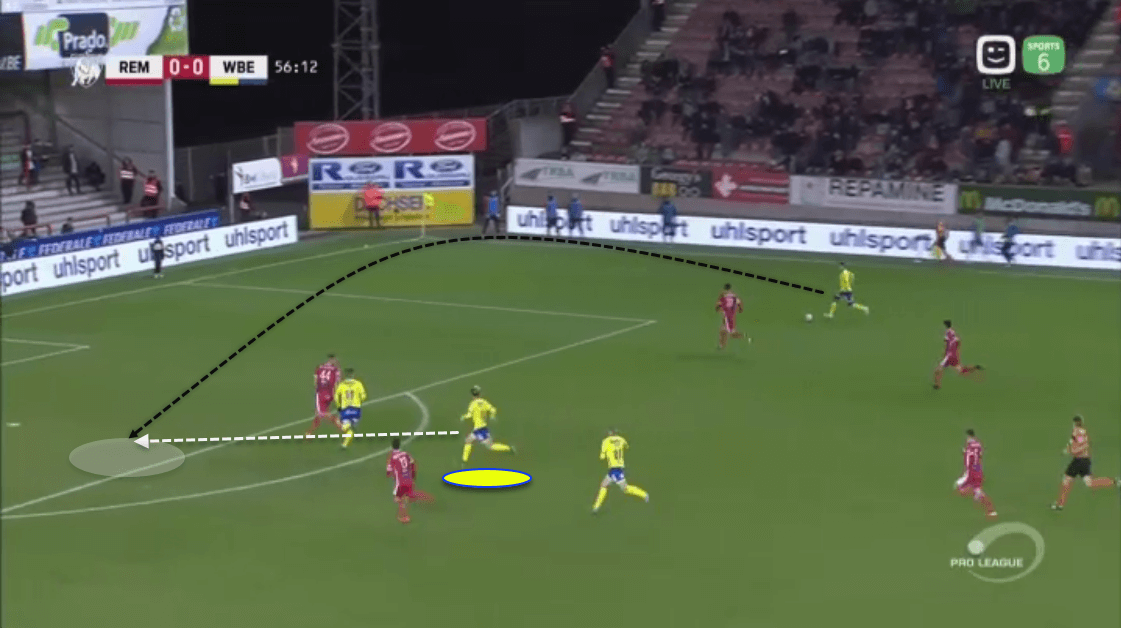 The main thing to notice here is, how Kobayashi uses the space between two central defenders, created by the movement of his teammate. He smartly gets to the space, uses his pace to arrive in advanced space and receive the crosses. This makes him a threat in the final third as well, with his prolonged ability of using his pace to arrive in the right place at the right time. As a result, Kobayashi’s shot map looks heavily influenced by his runs, as they are distributed close to the opposition area. 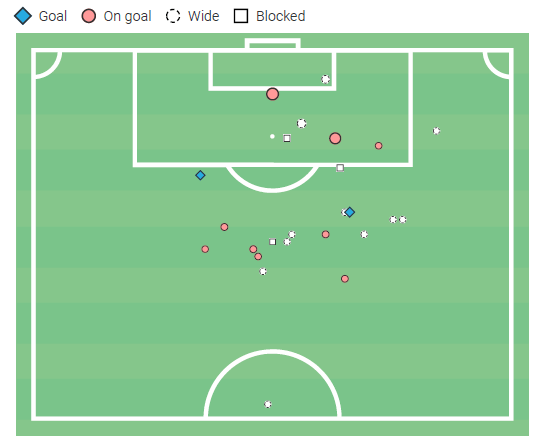 Al-Khor can be directly benefitted by this trait, as they lack a player that can detect space and make a run towards it to find a clear scoring chance, especially in a 4-2-3-1 with only one forward to play with. 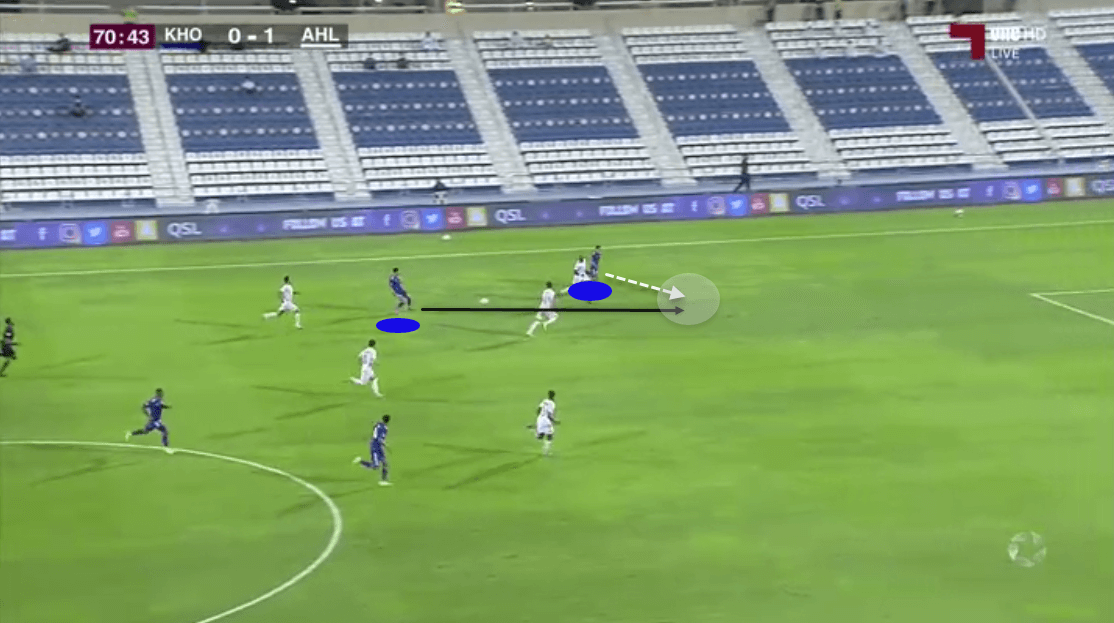 Taking a look at Al-Khor’s weaknesses, we can see two players making runs towards the centre as the wide player attempts to drift towards the half-space to receive. However, the move ends with none of the players getting towards central space. Instead, the defender’s task is made easy as the forward follows the defender in the process. 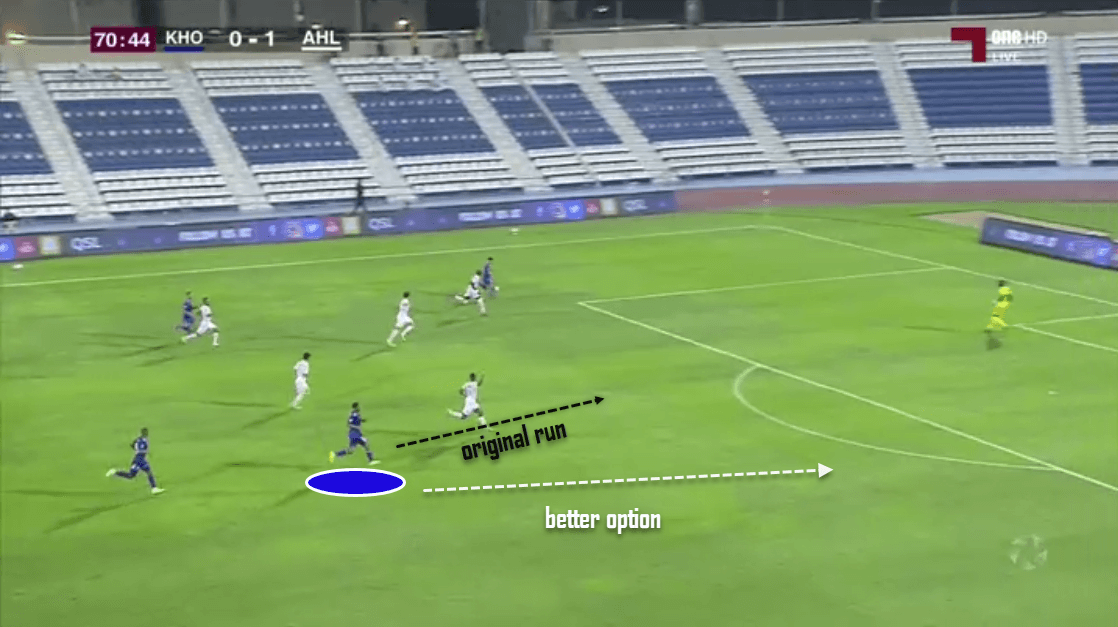 Kobayashi’s presence will strengthen their reception from wide sides, hence increasing Al-Khor’s dependence on central channel for attack. Al-Khor’s central preference has caused them to be overly predictable, hence making their attack ineffective and easy to deal with for opposition defences.

A glimpse of Al-Khor’s central dependence can be traced from the diagram above. With lack of a proper receiver and a smart-run maker, Al-Khor rely on direct passes (ones that have high chances of being intercepted) and hence have a congested as well as poor delivery cycle. Kobayashi’s presence should definitely improve this for the Qatari side.

Most of Al-Khor’s attack break down at the middle, and the need of a player, who can win the ball back with positional awareness and counter-pressing. If we look at Kobayashi’s recoveries, we see a similar profile in him. 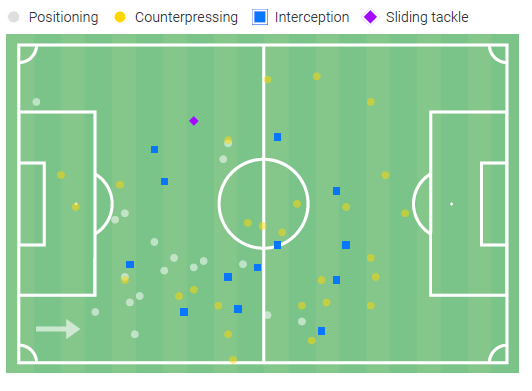 As we can see, the map consists dense proportion of recoveries done via interceptions, counterpressing and positioning. As we already mentioned, Kobayashi’s positioning in relation to the nearby space is strong, and hence he uses this to recover the ball as well. 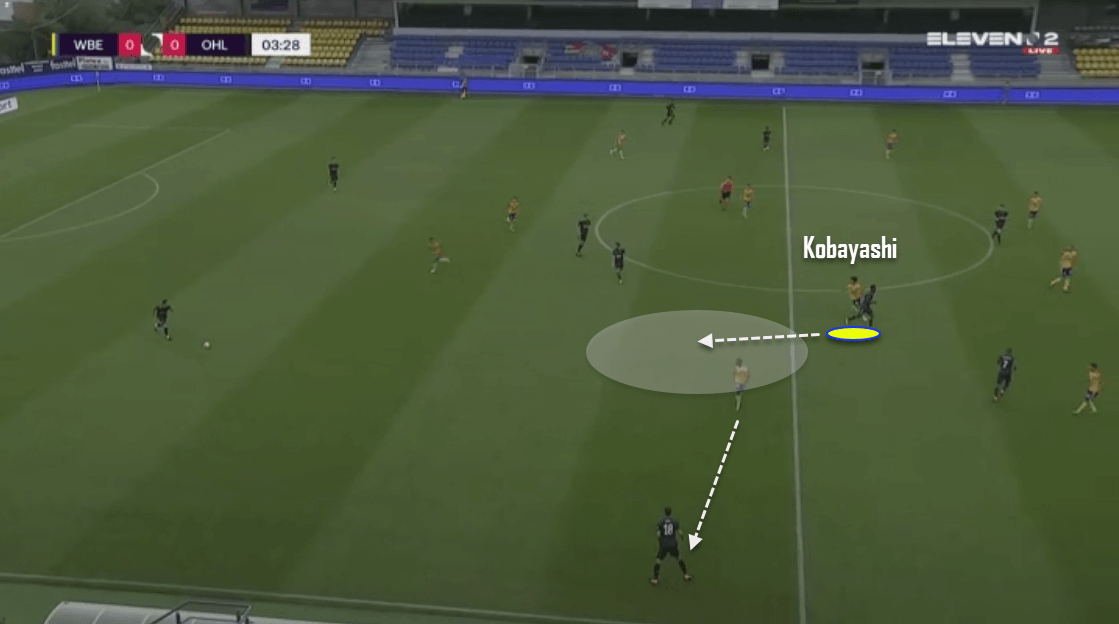 In this instance, Kobayashi sees a space and runs towards it. While his teammate drifts wide to mark another player, he places him in the most prominent passing lane that the ball carrier will look to go with. 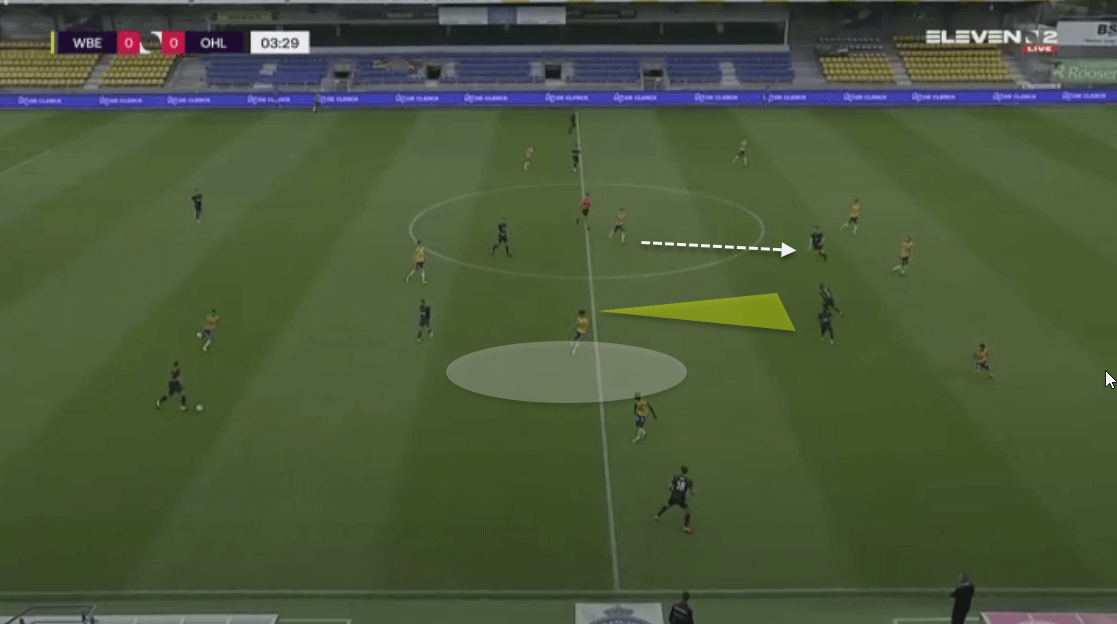 After he jumps to the space, he briefly checks out the players behind him who can receive the pass. He realizes there are two, and hence goes even further to close down the angle on the ball receiver. However, his horizontal positioning remains unchanged, as he maintains the distance to quickly jump into either player’s lanes. 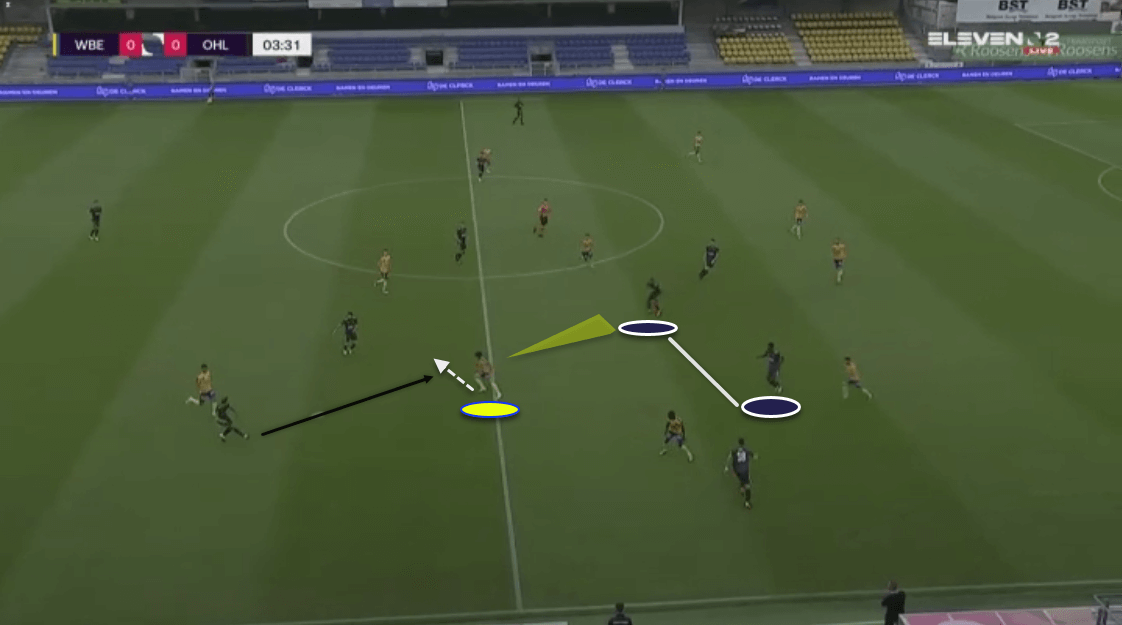 As the ball carrier opts to pass towards Kobayashi’s right, he spots it, and with the help of his positioning at the centre of both options, he manages to win the ball back. In this way, he can intercept balls not only during the build-up but also during quick counterpressing occasions with his awareness.

As a result, we can see Kobayashi roaming around the pitch, fully-functional to win the ball and drive the ball forward, like the picture below, where he wins the ball and passes it to his teammate. 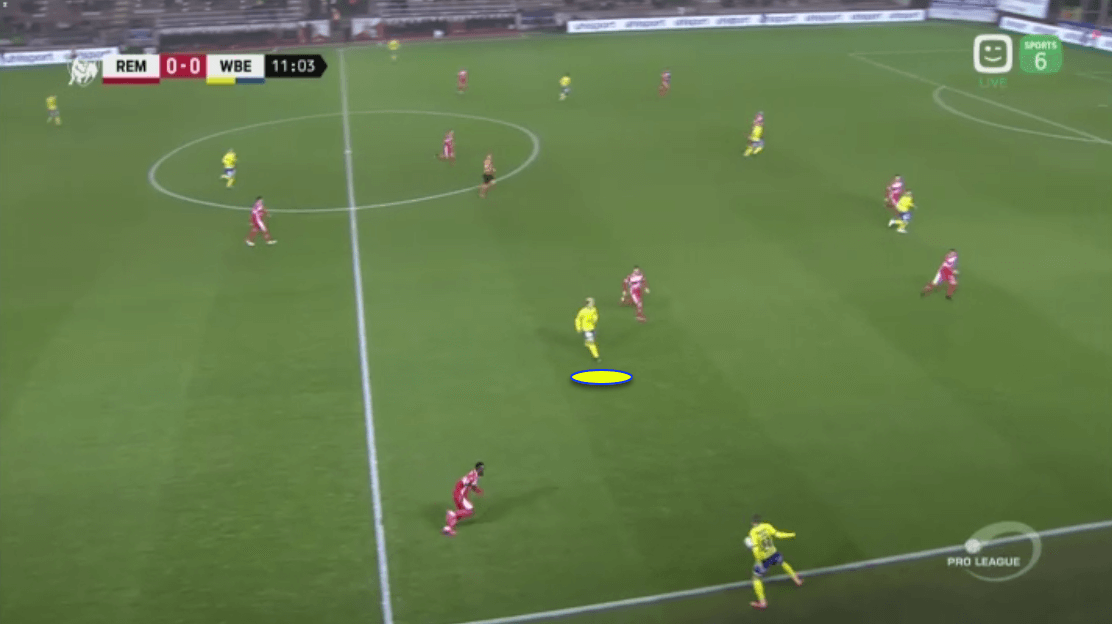 Al-Khor’s start to the campaign has been poor – they linger at the tenth spot and need a boost to improve on their previous league finish. While Yuki Kobayashi can be a good signing to facilitate their aims of finishing higher, recruitments at the attacking front can hugely László Bölöni’s side.

Kobayashi shall play more minutes than he did at the Belgian League and will be expected to finally be a regular and consistently deliver his potential with the new Qatari side.