Mikel Arteta’s reign at Arsenal has already seen the Gunners improve in various aspects. Of course, we can’t expect them to suddenly conquer the Premier League but the progress is clear for everyone to see.

And the last couple of games in 2020/21 have given us more interesting concepts the young coach is implementing. One such concept concerns a rather interesting approach and build-up variations around Kieran Tierney, Arsenal’s left-back.

This tactical analysis will provide you with a scout report on those build-up mechanisms in Arteta’s tactics. It is important to note that our analysis will be based on a rather small sample in 2020/21 but will still provide insight into the topic.

Tierney’s role in the attacking phase

Arsenal have gone through some changes concerning their tactics once again. Even though he used to favour the 4-2-3-1 system before, Arteta has made a switch to a 3-4-3 as of late. And depending on the formation used, the roles of the players can differ as well.

The same goes for Tierney who has seen his on the ball tasks shift across games. But the interesting thing to note was how he was specifically deployed in Arsenal’s victory over Sheffield United in the Premier League.

Below, you can see the Gunners’ pass map and Tierney’s heatmap from that particular clash.

One thing that stands out is the 23-year-old left-back’s positioning. Both graphics clearly show us he had a much more advanced role than what we’ve seen throughout the new season. This could be down to multiple factors.

Firstly, Arteta opted for a 4-3-3 instead of a 3-4-3, giving Tierney much more attacking-minded responsibilities and width provision. The 4-3-3’s initial structure demands the full-backs to act more aggressively, pushing them forward and then dropping a midfielder to combat the press. For that reason, Tierney was much more involved in the attack against Sheffield.

Secondly, and regardless of the formation used, Arteta might have recognised the attacking potential the young Scottish player has and decided to make the most out of it. Down below, we can see Tierney’s progressions and dribbles in 2020/21.

We can see how effective the 23-year-old is at getting the ball into the danger areas either by passing or running with it. Just to back it up with some data, Tierney is second in the league in both attacking duels and dribbles with 3.78 and 2.2 per 90 respectively.

He also ranks sixth in progressive runs with 2.2 and 14th in progressive passes with 10.38. Interestingly, he mostly starts his dribbles only once he’s already reached the final third, which is often a direct result of Arsenal swapping sides and ejecting Tierney into space. But we’ll tackle that more in the following sections of this tactical analysis.

Our first example of Arsenal’s build-up variations around Tierney is a fairly simple one. In possession, and especially in the face of a more aggressive press, the Gunners will look to create a diamond out wide with Tierney, one centre-back, and either two midfielders (one central and one wide) or a winger and a midfielder. 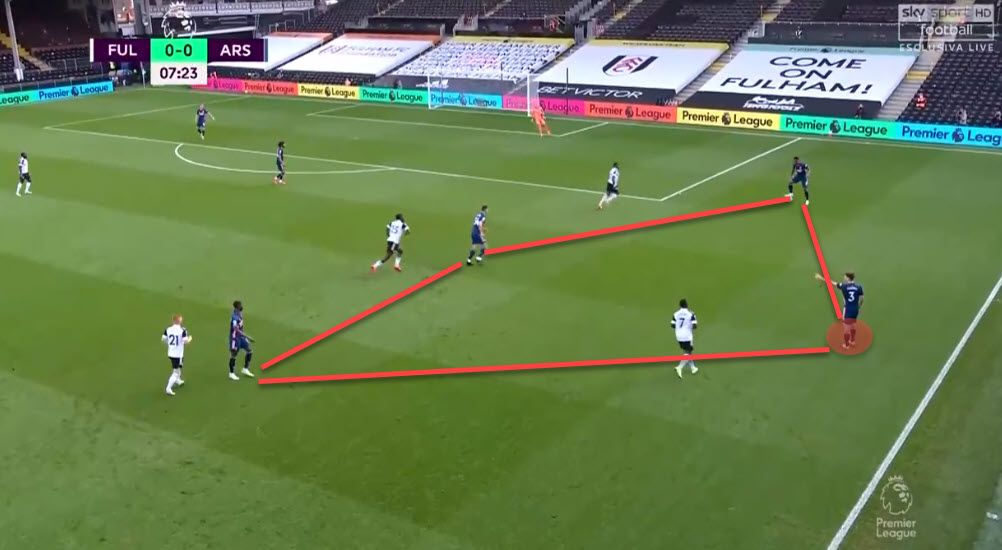 We can clearly see that relationship in the above example against Fulham. This, however, is a structure that’s present even higher up the pitch once the Gunners advance into the middle third. The key here is the flexibility and numerous options every player gets in case the ball is played into him.

In the first example above, Gabriel is on the ball and has three options to progress play or recycle it towards the right side instead. The same thing happens in the following image against Sheffield with Tierney in possession this time.

We can see the same relationship, only now it’s in the middle third. By creating multiple passing channels, Arsenal ensure the ball can be progressed cleanly. Interestingly enough, that particular clash against Sheffield showcased the flexibility of the structure and Tierney himself.

At times, the 23-year-old would invert centrally, leaving the flank for Bukayo Saka who would drop to receive the ball directly from the backline. Again, Gabriel is on the ball, and Dani Ceballos and Tierney complete the diamond. 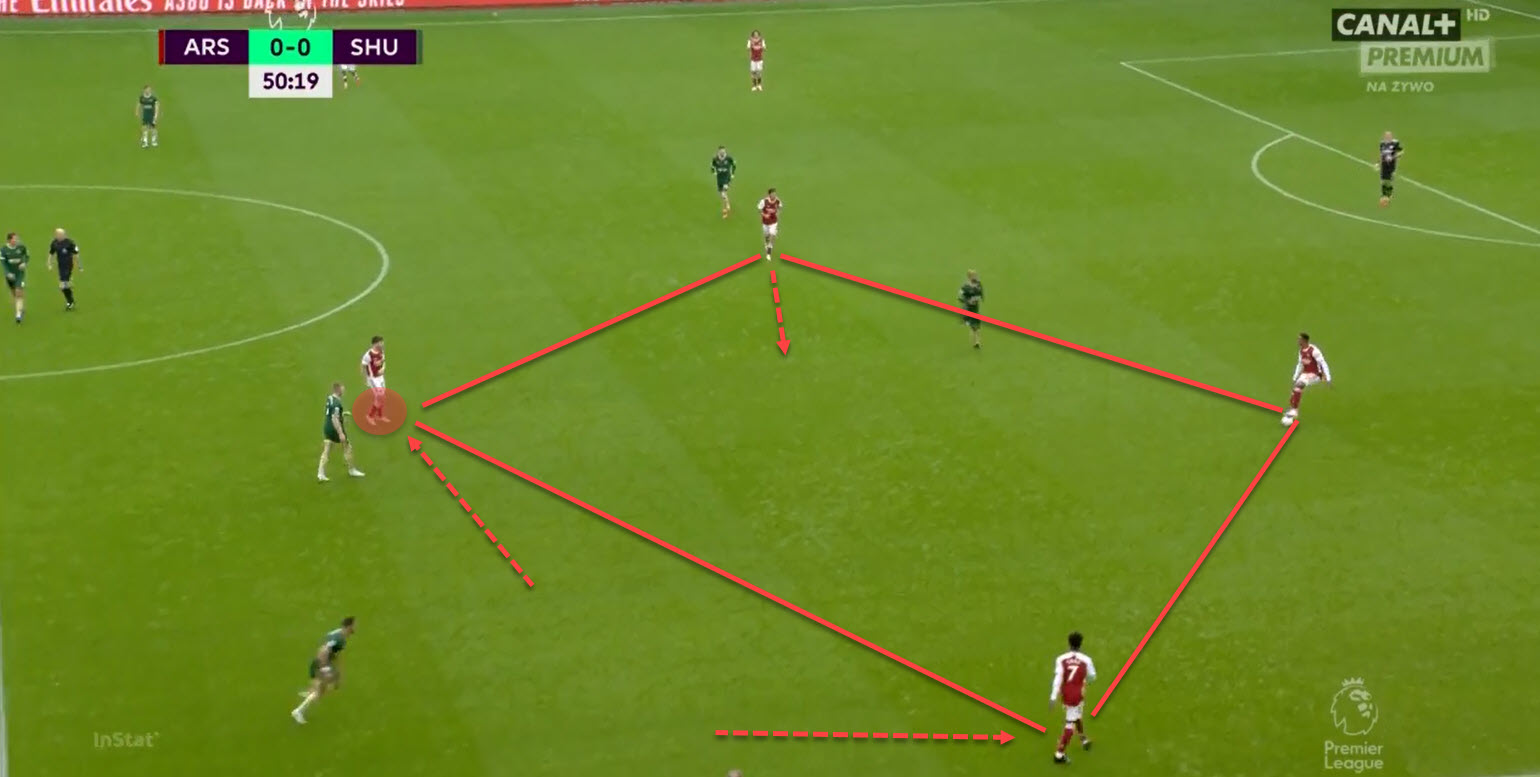 We’ve already mentioned how the game against Sheffield gave us a new Arsenal blueprint when it comes to the build-up tactics surrounding Tierney and that left side of the pitch. It does seem like the young full-back will have a more advanced role moving forward.

What Arteta likes to do is drop one of his centre-midfielders into the backline to create a back three when building-up. In a 3-4-3 formation, that wouldn’t be necessary and Tierney would be in the backline most of the time. However, in such scenarios, a dropping midfielder would allow him to push up and act as a wingback instead. 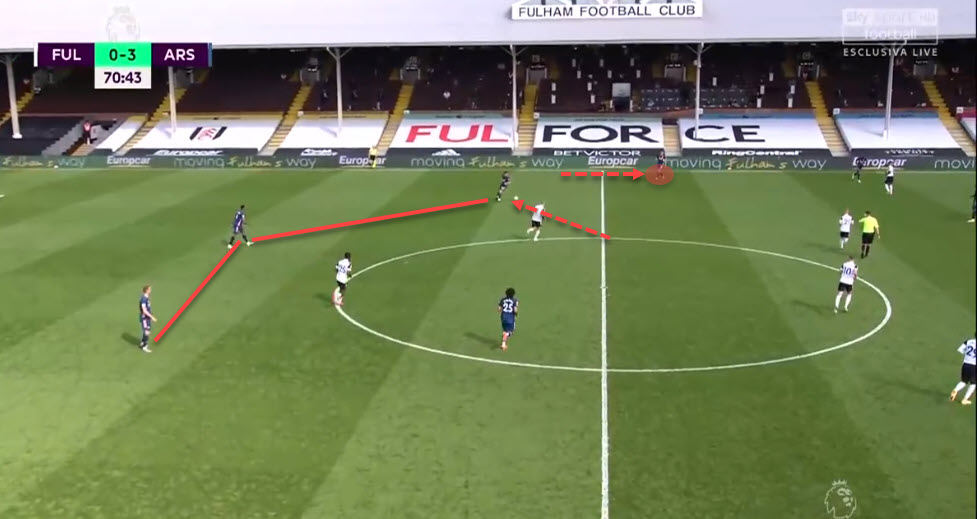 Above, we can see another example from the Fulham game with Tierney assuming a much higher position once the back three is created with an additional midfielder. This structure also has different variations, which we will further dissect in this scout report.

Below, you can see Mohamed Elneny becoming a right centre-back in the first phase, allowing Gabriel to run forward with the ball and then connect with Tierney on the left flank. The similarity with the previous example is that once again, the Scottish full-back was given the licence to advance once Arsenal’s backline transformed into a back three. 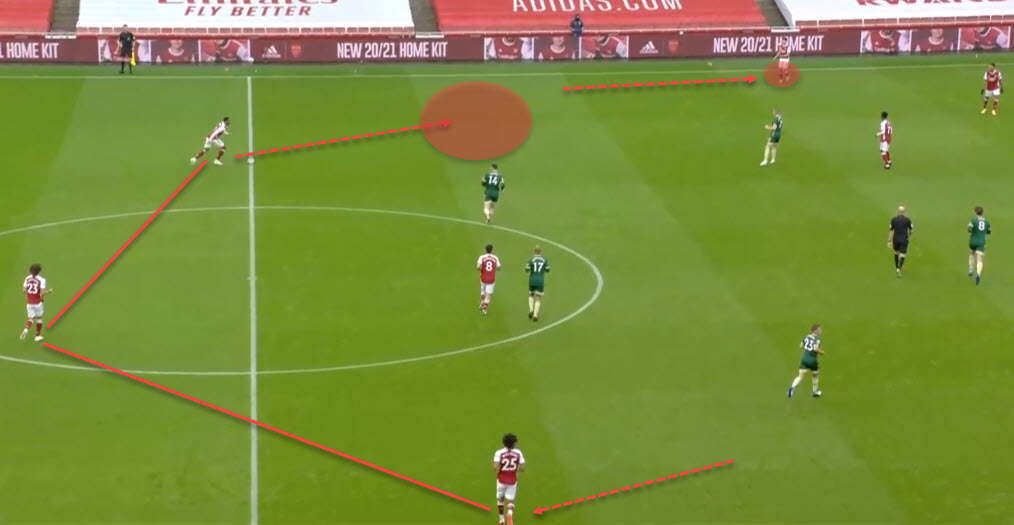 The third example in this tactical analysis will delver deeper into the relationship between Tierney and the respective players on his side of the pitch. Once he does position himself around the halfway line, he becomes a clear option to progress the ball.

However, depending on the route Arsenal decide to take in their build-up, the movement of the players changes. If the ball goes straight to Tierney, it immediately activates the runs of both the wide midfielder and the winger – in this case, Saka and Pierre-Emerick Aubameyang. 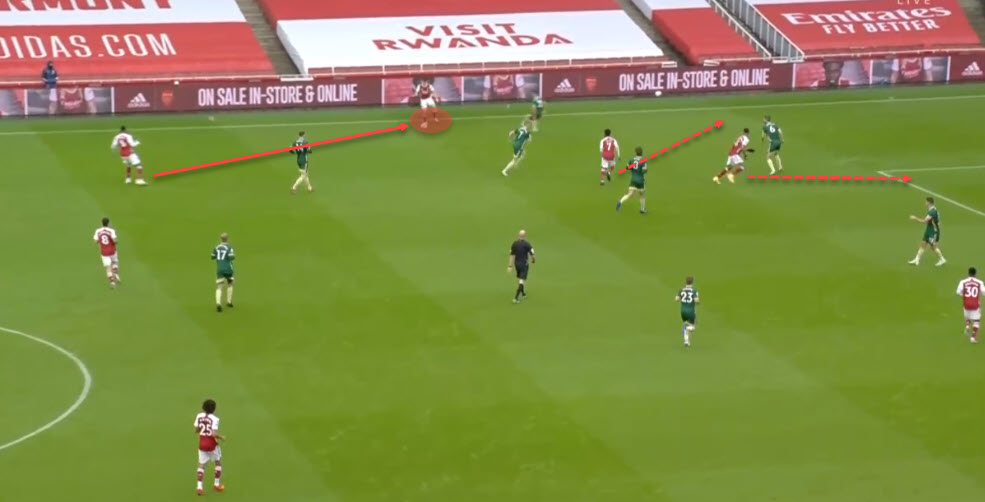 Since here the opposition don’t press aggressively, Arsenal’s centre-backs can push up, just as Gabriel has in the image above. Once Tierney has received the ball, both the advanced players start running into space.

However, just like with the other examples, this one has multiple variations too. Sometimes, Saka will be the one to drop deeper to receive the ball as well. That is usually Tierney’s cue to overlap himself, as can be seen below. 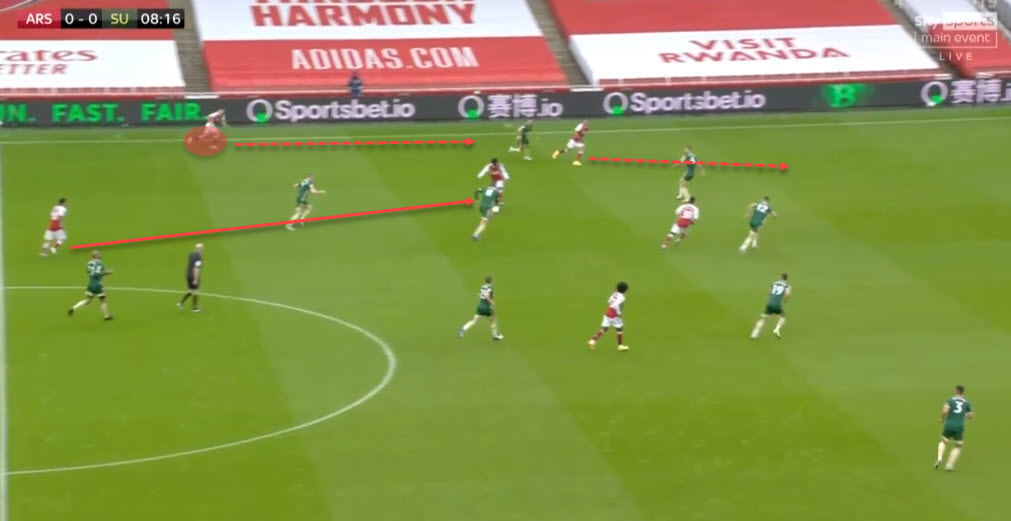 In that case, Aubameyang cuts inside and Tierney can stay wide and run into space. But there’s one more interesting tactic we’ve noticed in that same game. Sometimes, Aubameyang will either make a run out wide or simply hug the touchline when receiving the pass.

When that happens, and Saka decides to drop deeper, we see opposite movements from Arsenal’s players, dragging the markers and creating space in-between the lines. The following example shows us such an instance.

Both Saka’s and Aubameyang’s movements open a new passing channel, allowing Tierney to find Eddie Nketiah between the lines.

We’ve already mentioned how Tierney is flexible enough to both over and underlap when necessary. These constant switches mean the structure is fluid and difficult to properly mark. Just as the analysis has covered this aspect in the first phase of the build-up play, it will now translate to the upper thirds.

Once again, since in the image below Arsenal are facing a mid-block, the backline can move forward and start the attack from around the halfway line. Notice how Tierney exchanges places with Aubameyang, advancing through the half-space and then drifting out wide once he enters the final third. 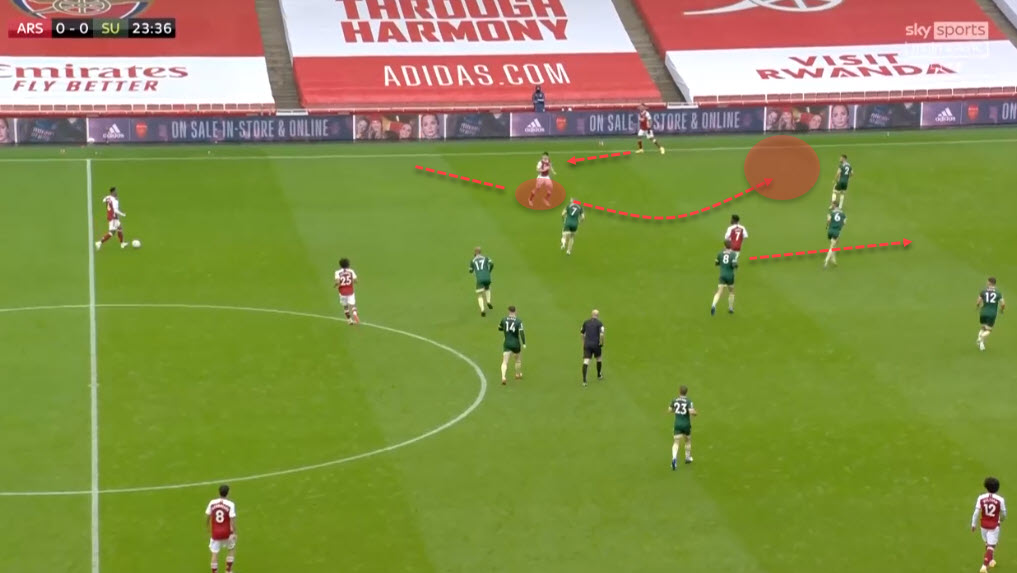 Again, we see some common features we’ve mentioned. The full-back can advance since the midfielders are supporting the backline, ensuring clean progression and numerical superiority in the first phase.

Saka is once again dropping deeper to potentially receive between the lines and Tierney’s run gives the Gunners another avenue to explore. Once Aubameyang receives the ball, he immediately has multiple channels to choose from.

When faced with an aggressive high press, having a defender capable of breaking the lines with his passing is a must. Arteta’s tactics usually include multiple forwards dropping deeper to help the ball progression. This then gives the backline more options to escape the press.

And Tierney is often the player to receive the ball deep and then pass it forward. The following example will show us such a scenario. Here, Fulham are pressing all the way to Arsenal’s box and with most of the options man-marked, that’s the cue for the forwards to start dropping deeper. 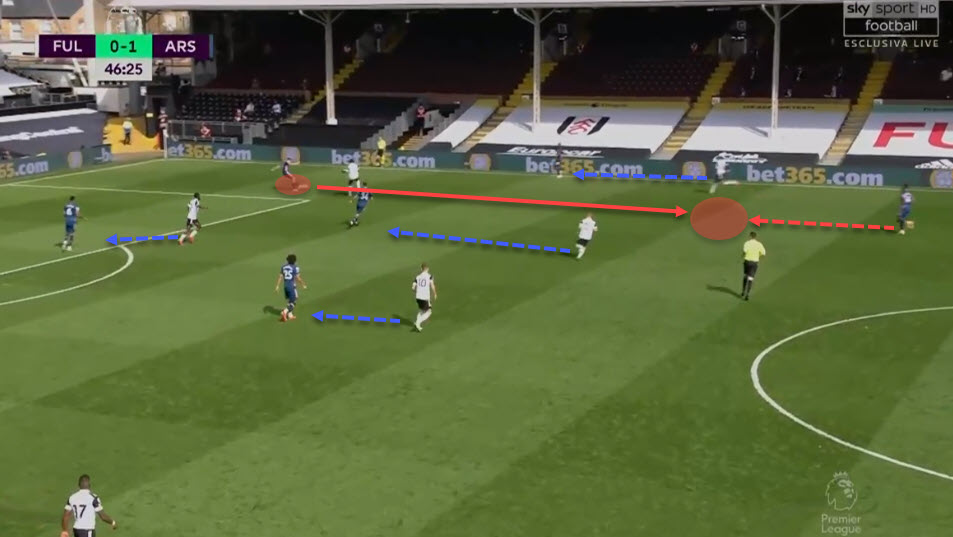 While two of Fulham’s midfielders are busy marking their counterparts, that gives Arsenal an extra man as an option to advance through the half-space. Tierney recognises the free channel and exploits it perfectly with a direct ball from the backline.

This particular situation shows us a 5v4 on the left side of the pitch, which is the foundation of Arteta’s tactics – building numerical superiority. Often, that will start from the box where we can usually see the goalkeeper, two centre-backs, and a single midfielder ensuring they have the man advantage in the first phase of play.

The full-backs will stay wide and potentially a bit higher, depending on how many players the opposition has committed to the press. We’ll explore that a bit more in the final example of this tactical analysis.

Our sixth example of Arsenal’s interesting build-up patterns with Tierney is a continuation of the previous section. We’ve mentioned how the goal-kick can often start with three outfield players and a goalie inside the box and the full-backs out wide.

From that situation, the ball will often be recycled towards the flanks, and then using one of the multiple patterns we’ve mentioned, it will be advanced up the pitch. And the following examples will essentially be a combination of most of them. 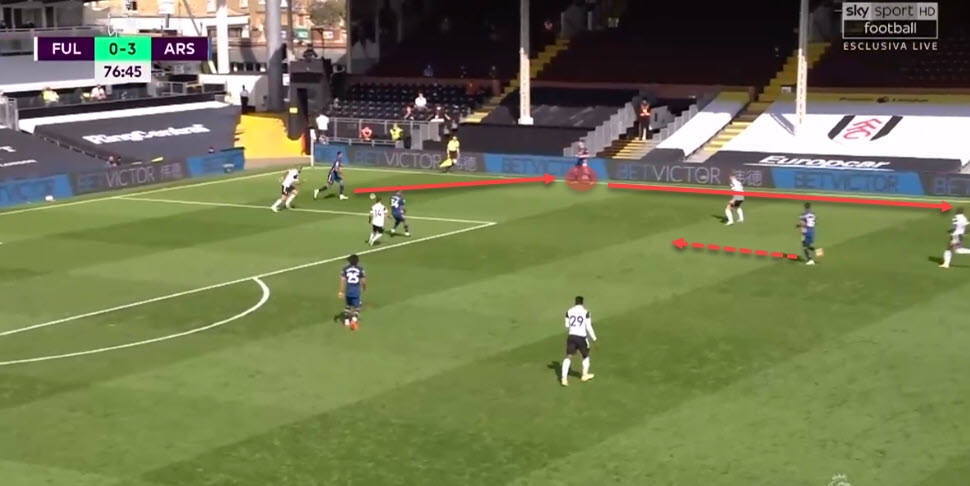 Firstly, notice the diamond shaping up when Tierney receives the ball on the left. Secondly, in the face of a high press, Arsenal are dropping multiple players deeper into their half. Thirdly, Tierney can then utilise his passing to find the winger who’s coming as support.

The ball is then played in a straight line forward, laid off for the midfielder who’s now advancing, and then deployed towards Alexandre Lacazette who continues the attack. 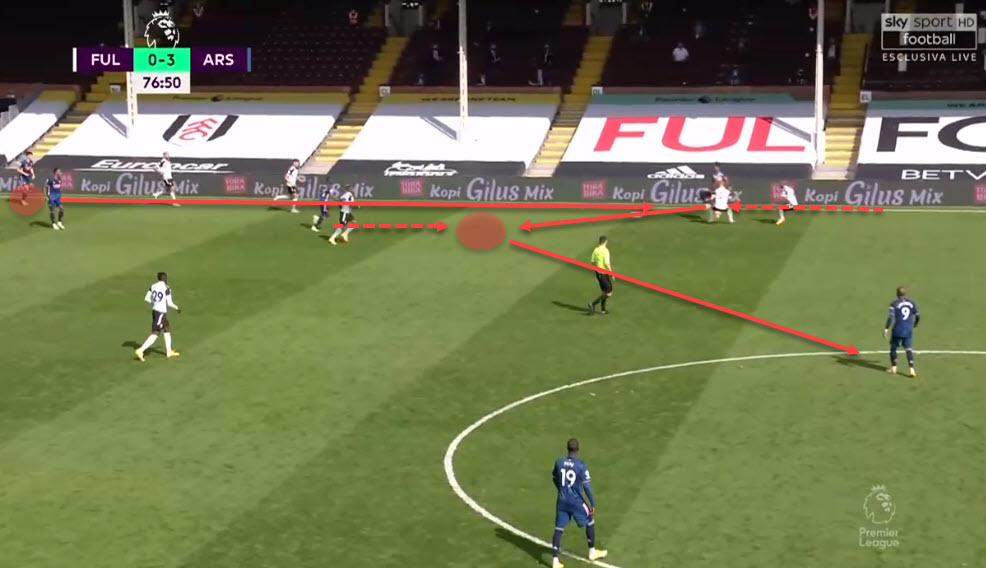 At first, this seemed like a brilliant isolated move but upon further analysis, it turns out it happened more than once and against multiple opponents. We can see a fairly similar pattern in the following example against Liverpool.

Again, it all starts with Tierney receiving out wide and then finding a dropping forward with a piercing through ball. The pass is then laid off for the advancing midfielder and deployed towards Lacazette in the central areas. 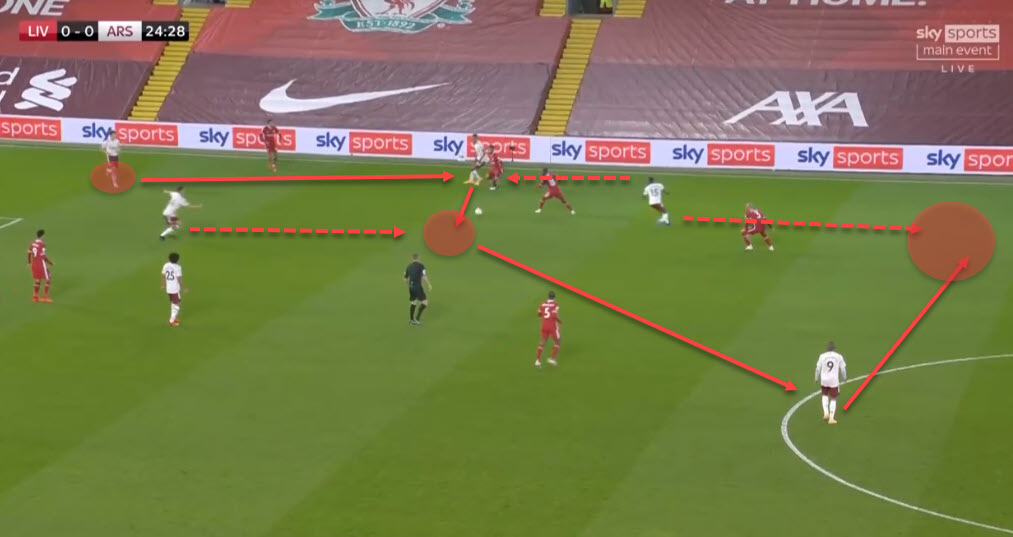 The attack continues with the Frenchman immediately playing the pass out wide again, exploiting all the free space.

This tactical analysis has given you some of the different patterns Arsenal have shown in the build-up phase around Tierney. The young left-back seems to be growing into the role and slowly turning into an important piece of Arteta’s tactics.

And while the caveat might be in the small sample, it still provides us with an interesting study that could evolve as time goes on.