The Belgian Pro League is just seven matchdays in and we already have had some surprising results and performances from teams that weren’t expected to perform as well as they are at the moment. One of those teams is Beerschot. Under Hernán Losada Beerschot stand in the fourth position by winning against the likes of Genk and the champions Club Brugge.

Gent, on the other hand, have had a rather disappointing start to the season. After the sacking of Laszlo Bölöni, Wim De Decker was promoted from assistant coach to the full responsibilities. After some discouraging results and a Champions League deficit, De Decker’s men were looking to make an end to this bad run.

In this tactical analysis, we will look at the tactics both coaches implemented in order to win the game. This analysis will give a more detailed look into the game.

Home side Gent went for a 4-4-2 formation, with experienced keeper Sinan Bolat between the sticks. Milad Mohammadi was the left-back, while Alessio Castro-Montes was the right-back. The defensive partnership in the middle was Igor Plastun Michael and Ngadeu-Ngadjui. In front of them were the pair of Sulayman Marreh and former Bayern Munich midfielder Niklas Bernd Dorsch, with Anderson Niangbo on the right and Osman Bukari on the left. Former Premier League striker Laurent Depoitre partnered Roman Yaremchuk upfront. 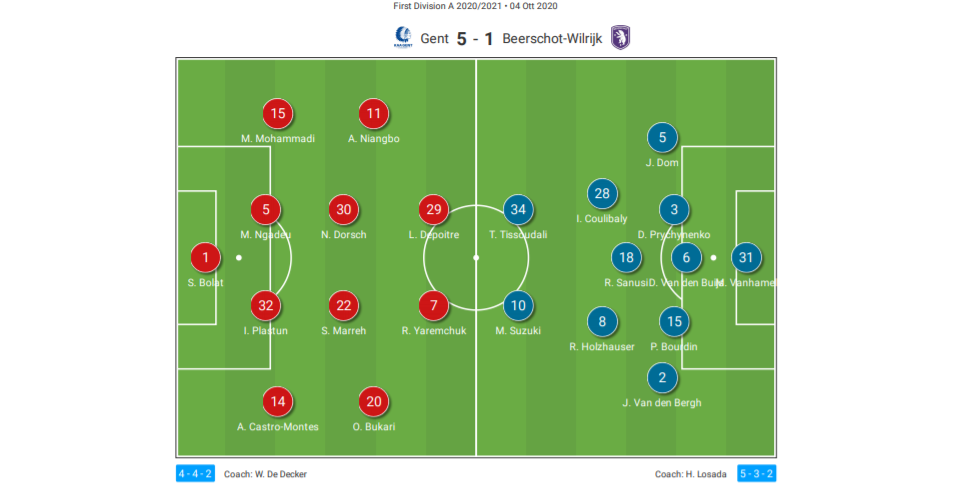 Beerschot stuck with their 3-5-2 formation, with Mike Vanhamel in goal. The back three was made up of Pierre Bourdin, Joren Dom and Frederic Frans. Reda Halaimia was the right wing-back, with Yan Vorogovskiy on the opposite side. Ismaila Coulibaly and Ryan Sanusi were playing alongside Beerschots talisman Raphael Holzhauser, who is Beerschot’s top scorer and assist provider so far. Japanese international Musashi Suzuki got his first start up front alongside Tarik Tissoudali.

When facing Beerschot this season, keeping Holzhauser quiet is key to having any chance. He is a difficult man for defences to deal with because he is given a free role by head coach Losada. The Austrian is allowed to drift in and out of spaces on the left-hand side, sometimes dropping deep into his own half, other times being right up next to the forwards. The image below shows how Gent looked to deal with keeping him quiet. 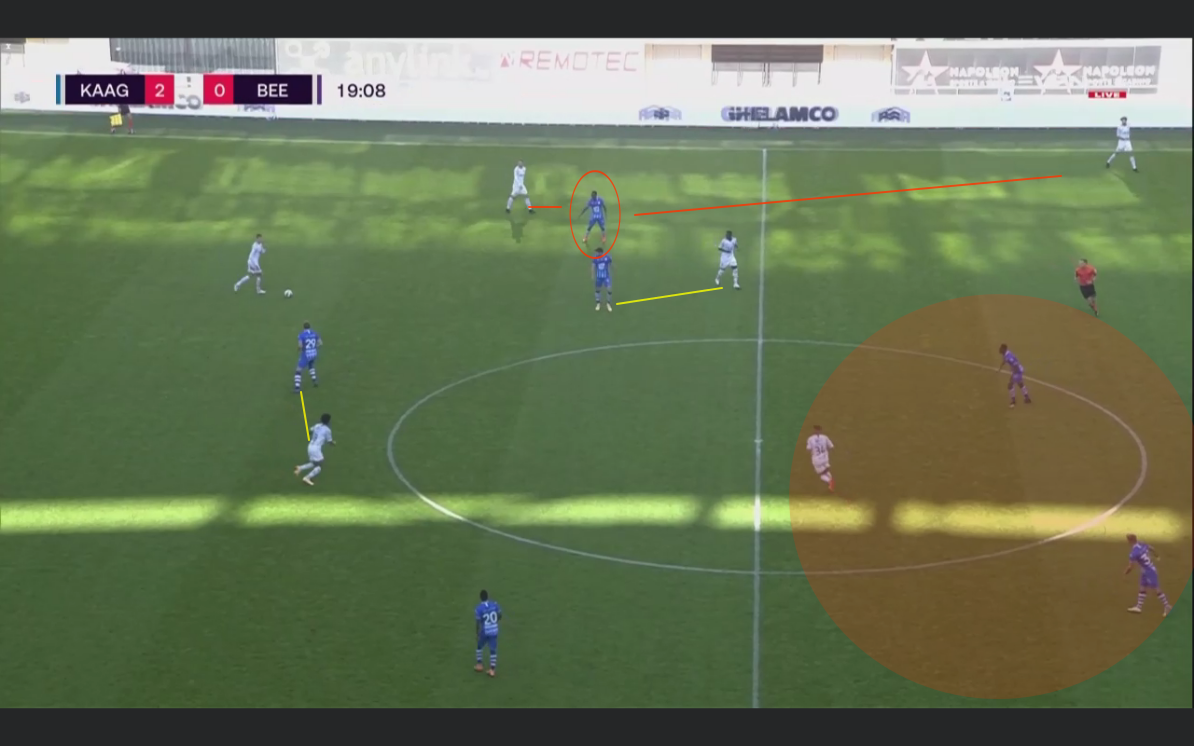 From the first minutes, it was clear that Holzhauser was someone that Gent coach De Decker wanted to ensure was not given space to be the main playmaker for Beerschot. They looked to deny him the ball where possible in their own half. Their defensive shape gave Gent the opportunity to create an overload in midfield during the defensive phase. The two strikers Depoitre and Yaremchuck had to cover shadow both pivots and prevent any pass into them. Consequently, Gent had a two versus one advantage deeper in the midfield area. As they had one free player in midfield, Holzhauser could easily be marked and prevented of any danger.

Looking at the data, we see that Holzhauser ended the game with a 0.08 xG and a 0.73 xA. These are impressive numbers from a Gent standpoint when we consider how easily the Austrian has been able to score and assist against most Pro League teams this season. Holding him to only one shot all game is also a testament to De Decker’s game plan and how well his players executed it.

Also in the above image, we could see that the passing options to the wide centre-backs and wing-backs of Beerschot are shut off by Bukari. This was an obvious pressing trap by Gent, forcing Beerschot to play to the free Beerschot midfielder in the red zone. But notice how the two Gent midfielders in the red zone are ready to intercept any pass to the lone midfielder. The stats also show that Gent had 36 recoveries in the medium block, this was more than in low or high block. This shows how successful their pressing trap was. The advanced positions of the attackers, once the ball was won in the middle third, helped them counter-attack Beerschot successfully as well.

In the image below we can see how the ball is won in midfield and with three Gent attackers ready to counter-attack although they were in a defensive moment. 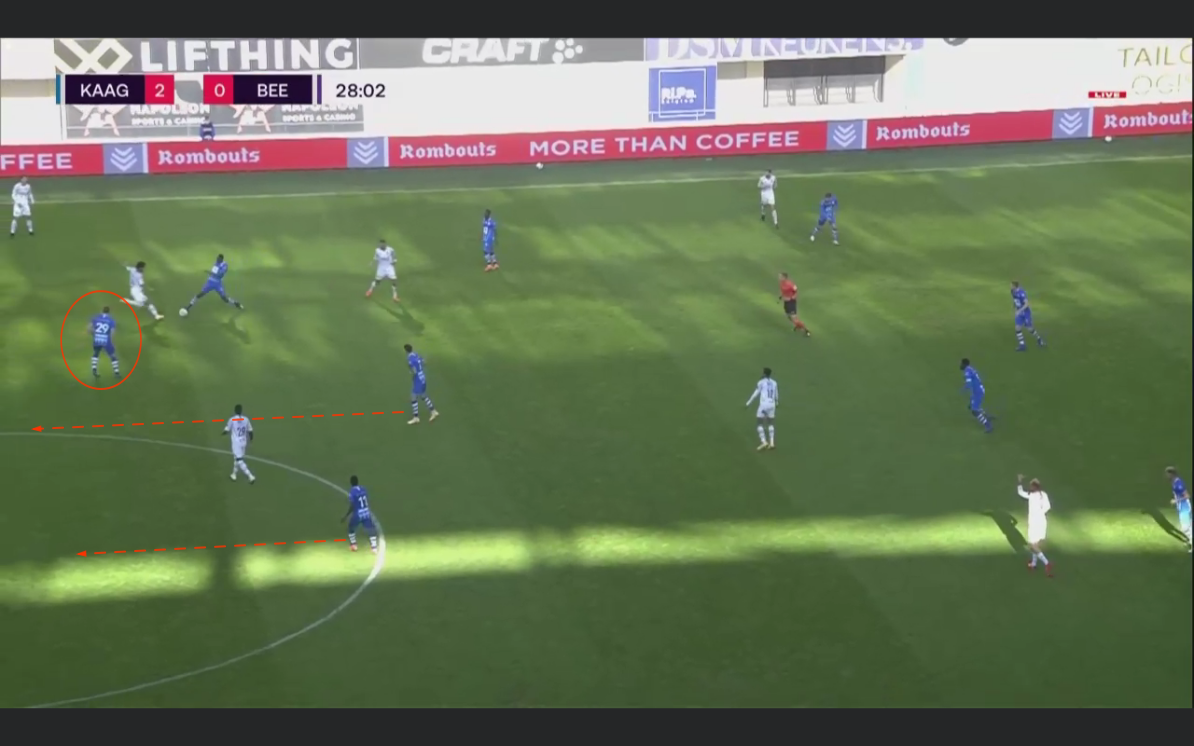 The constant counter-attacking opportunities were executed well by Gent. The first goal below was a good example of good execution. Depoitre is sent deep behind Beerschot’s last line. Bukari makes the unselfish run into depth. This attracts the far defender and opens space on the far side for Yaremchuck to run into. Also, the switch of play during the counter-attack made it more difficult for Beerschot to prevent the goal. This was due to the body position where the defenders can’t see the ball carrier and running players at the same time. 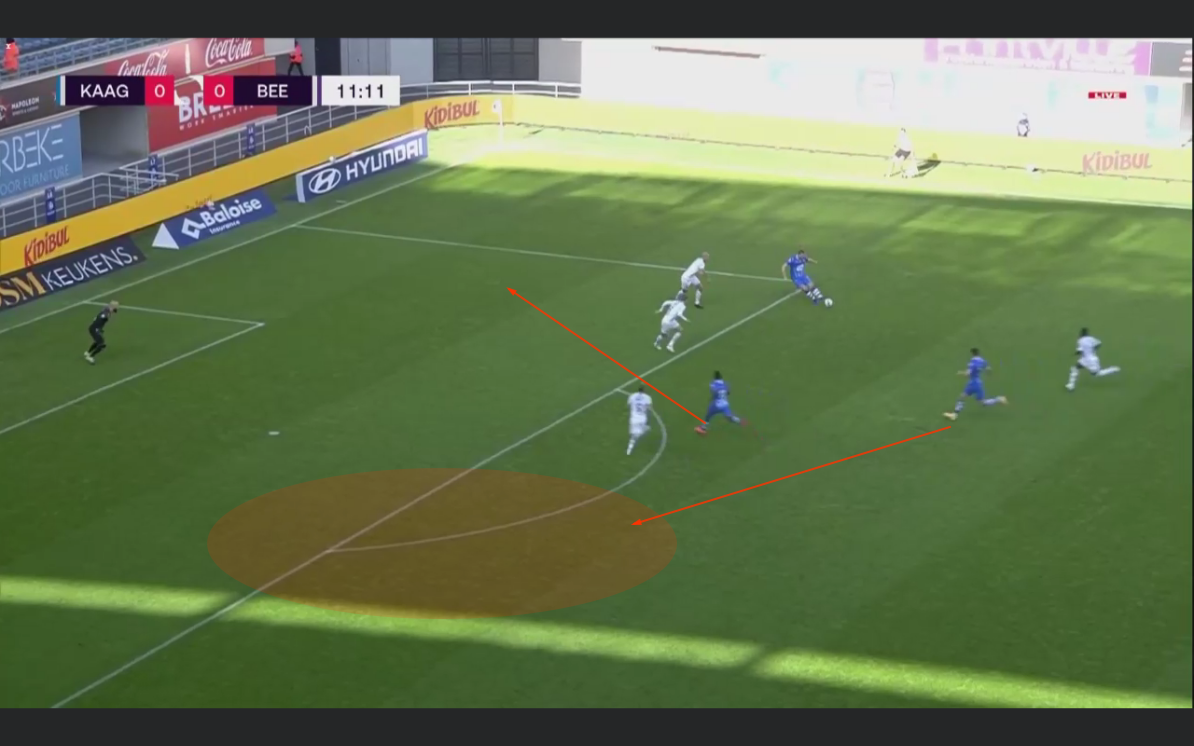 Another important principle is illustrated in the image below. Once Gent won the ball back, one player would always have his back to the opposition’s goal and be available for the vertical passing option. From here the players will try to exploit the centre and the half-spaces as the outside vertical lanes are deemed not to be useful during a transitional moment. 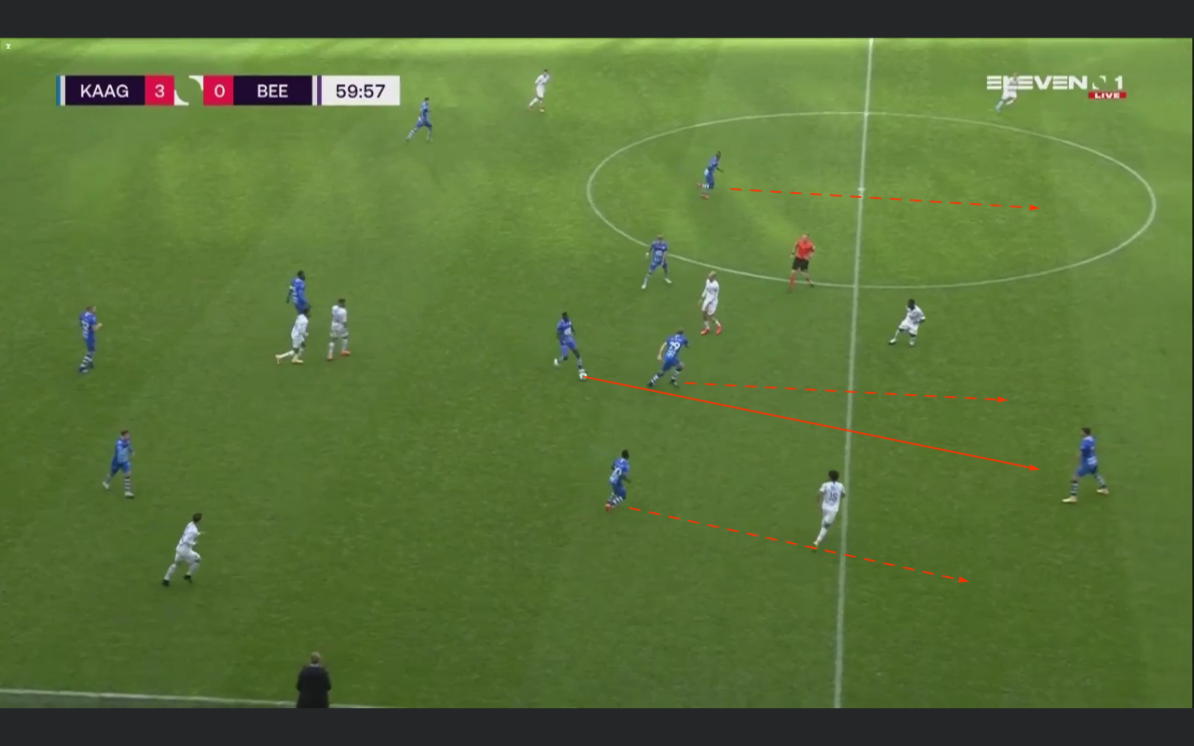 As discussed above Gent tried to dictate Beerschot when out of possession. But this was the case with the ball too. By playing out of the back, Gent tried to lure and attract Beerschot to press them. Which consequently meant that Beerschot’s line was stretched. Especially in the system Beerschot pressed, they let a lot of space occur.

The two strikers pressed Gent’s two centre-backs whilst the home side’s pivots were also followed closely. Due to Beerschot playing with a back five, the wingback had to step out and press the receiving full-back once this diagonal pass was played from one of the Gent centre-backs. Which meant that, due to large distances, the wing-backs were always late to pressurize the full-back. This made it easier for Gent to progress the ball through the thirds. 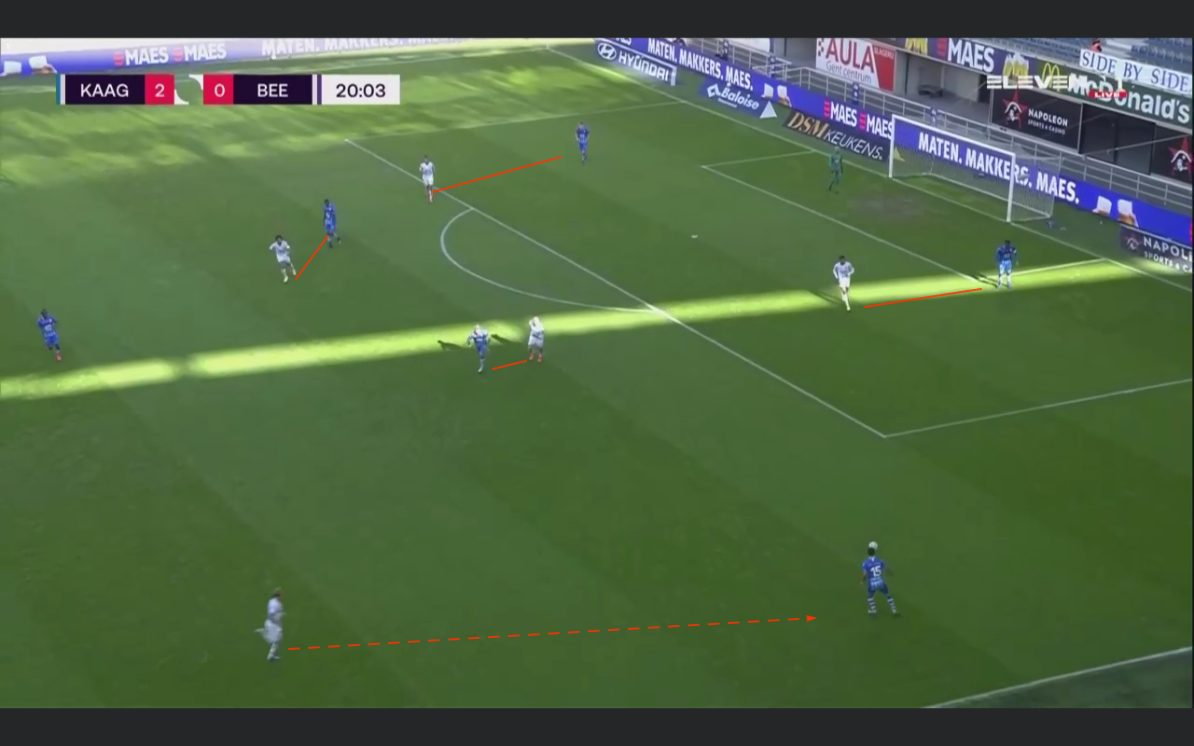 Because Beerschot only had one player occupying each outside vertical lane, Gent looked to overload this area. The winger would move inside to receive any vertical passes from the centre-backs. Whilst the full-back would wait for a lay-off from the winger. Consequently, space behind the wing-back opened up for one of the strikers to run into. Especially when Yaremchuck was played into this space, with his pace he was able to create danger. 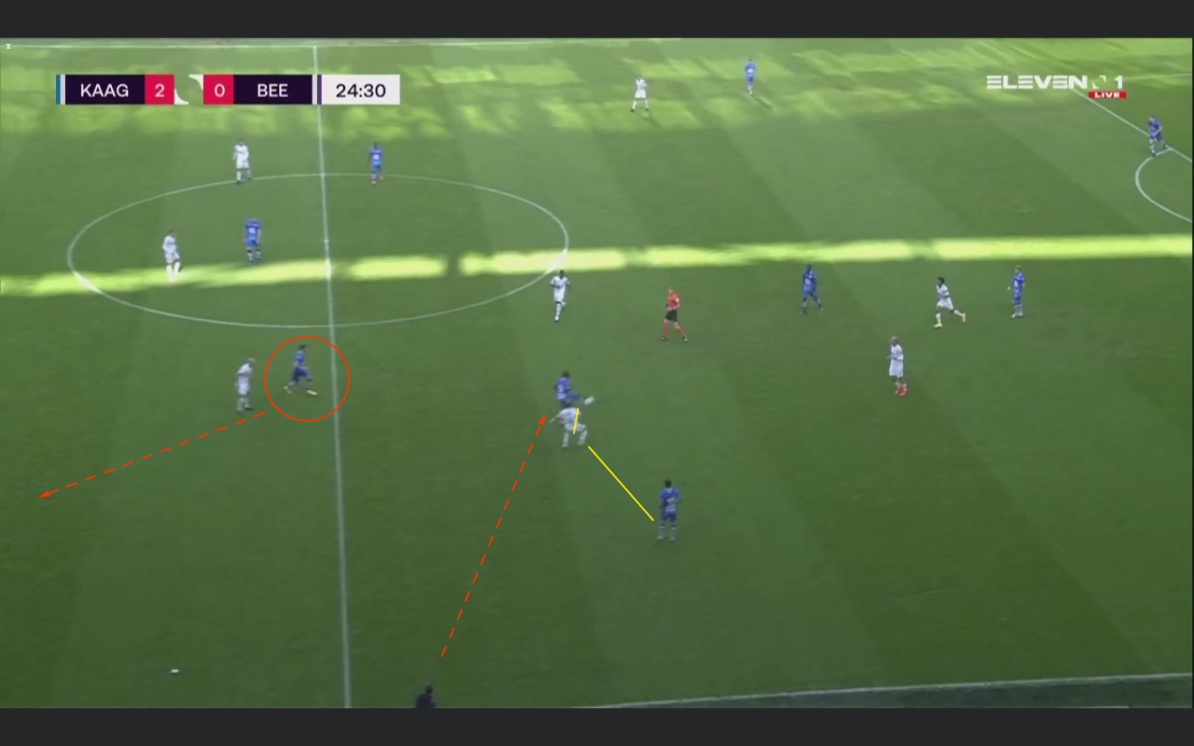 The game ended in a 5-1 thrashing by the home side. A day to forget for Beershot as they are looking forward to redeeming themselves after the international break. For Gent, it was a very positive game and a performance to build on for De Decker’s men.