Sunday afternoon saw one of the biggest games in the Belgian Pro League take place, with domestic giants Club Brugge and RSC Anderlecht going head to head. Anderlecht, under the guidance of former Manchester City defender Vincent Kompany, have been usurped in recent years by Brugge as the best team in the country. The former EPL winner has had a big job on his hands turning around the fortunes of the Brussels-based side, who have made a habit of throwing away games from winning positions.

After a slow start to the season, Brugge have started to find their form. They followed up last week’s victory in the Brugge derby with a 3-0 victory over Anderlecht on Sunday. They are now just one point behind leaders Charleroi, and look like they are set for another title-winning season.

This tactical analysis will look firstly at how the press of Brugge put Anderlecht under real pressure. Secondly, the analysis will focus on how the away side got their tactics wrong, before looking at how the two playmakers caused Kompany’s team all sorts of problems during the 90 minutes. 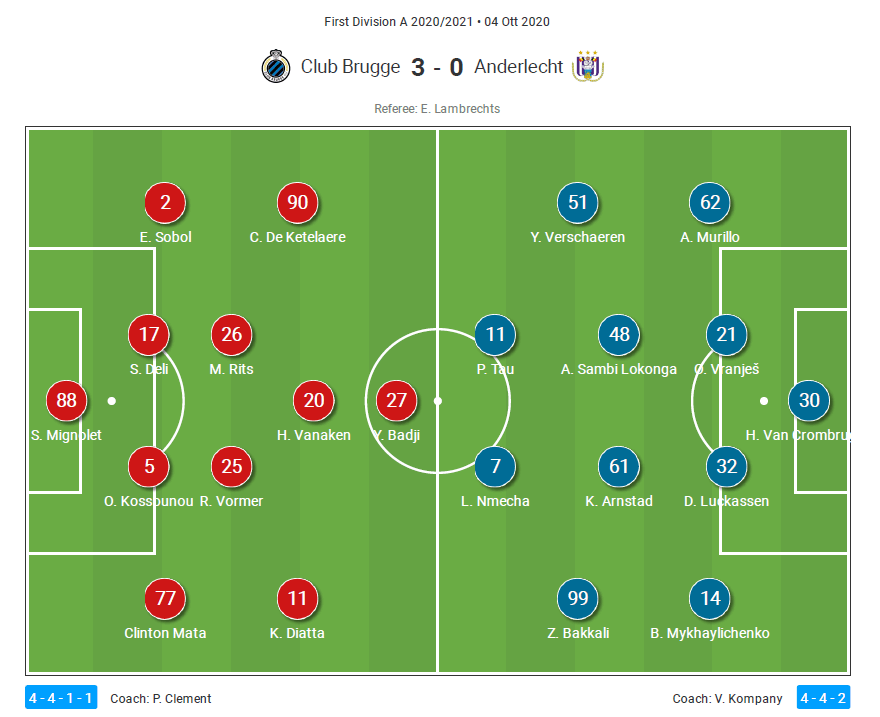 Phillipe Clement set his side up with a 4-4-1-1 formation with Simon Mignolet in goal. Highly-rated Angolan defender Clinton Mata was again at left-back, with Eduard Sobol at right-back. The centre-back partnership of Simon Deli and Odiolon Kossounou was unchanged from the week before. Ruud Vormer and Mats Rits were the central midfield pair, with exciting young Senegalese winger Krepin Diatta on the right, and 19-year-old Charles De Ketelaere on the left. Hans Vanaken played in behind another youngster from Senegal, Youssouph Badji.

For Anderlecht, Kompany went with a 4-4-2 formation. Hendrik Van Crombrugge was between the sticks, with Ognjen Vranjes and Derrick Luckassen as the centre-back pairing. Michael Amir Murillo and Bohdan Mykhaylichenko were the full-backs. The midfield four was made up of 20-year-old Albert Sambi Lokonga and 17-year-old Kristian Arnstad in the central pairing, whilst Yari Verschaeren was out wide right, with Zakaria Bakkali on the left. Percy Tau partnered Lukas Nmecha up front. Overall, it was a very young side that Kompany put out for the game.

Pressing from the off

Almost as soon as the referee started the game, Brugge were looking to press Anderlecht and put real pressure on their defenders trying to play out from the back. While the formation had Vormer playing alongside Rits, he was given freedom to push higher up without the ball in order to press. In some instances, as we see below, he was the furthest player forward for Brugge. They took advantage of their three-man midfield, with Vanaken in the attacking central area to outnumber the Anderlecht two, who struggled to help their side overcome the press. 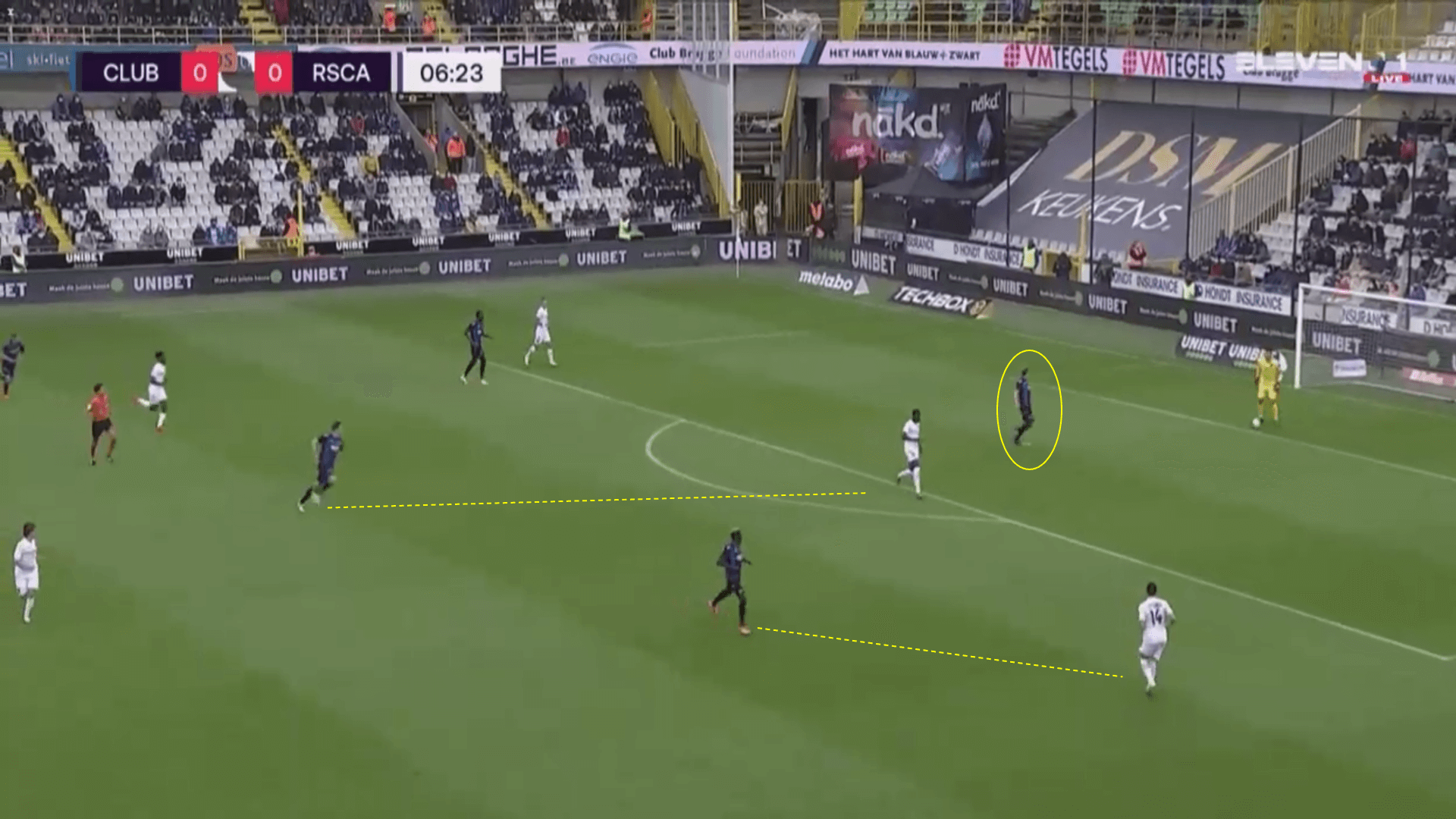 Keeping up such an intense press was never going to be possible for the entire 90 minutes. However, it allowed them to dominate most of the possession for the initial 20 minutes and was the catalyst for the opening goal.

As we see below, Vanaken has pushed on to be the highest pressing Brugge player, with Badji covering the initial pass. From the image, it looks like there is a simple pass on for the Anderlecht defender into Lokonga in the central area. However, a mistake from the defender with the pass finds Badji, who has closed down space. Now, Brugge are in a position to turn their press into a goalscoring opportunity. 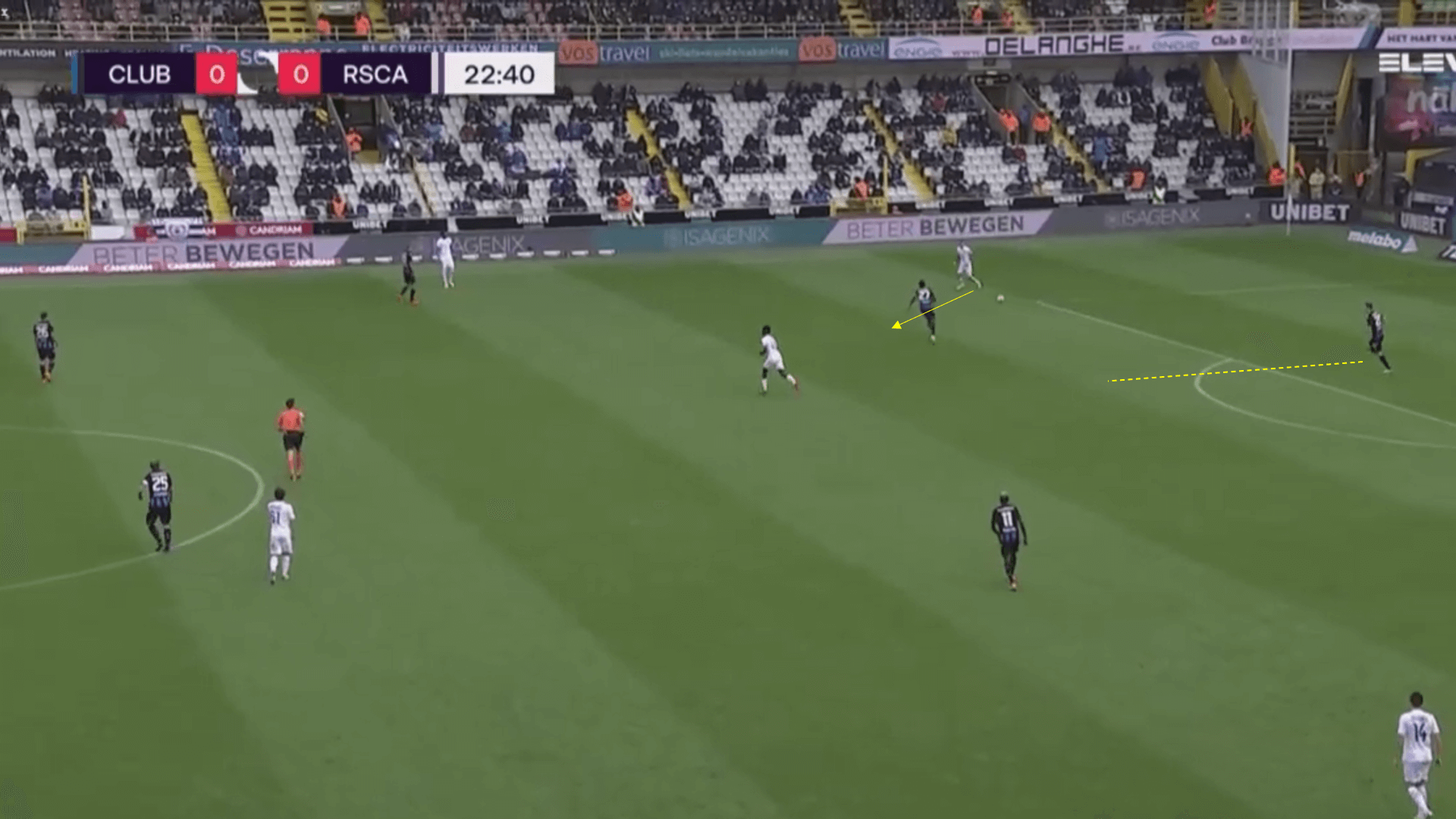 By being so far forward when pressing, Vanaken is able to escape the marking of the defenders and drift back into the space between the two to receive the ball. Unfortunately for Anderlecht, Mykhaylichenko has pushed forward, as the ball was on the right-hand side, and he was expected to stay wide to be an outlet if a diagonal switch was needed. This now leaves Diatta, who is one of the fastest players on the pitch, with plenty of space to drive into. 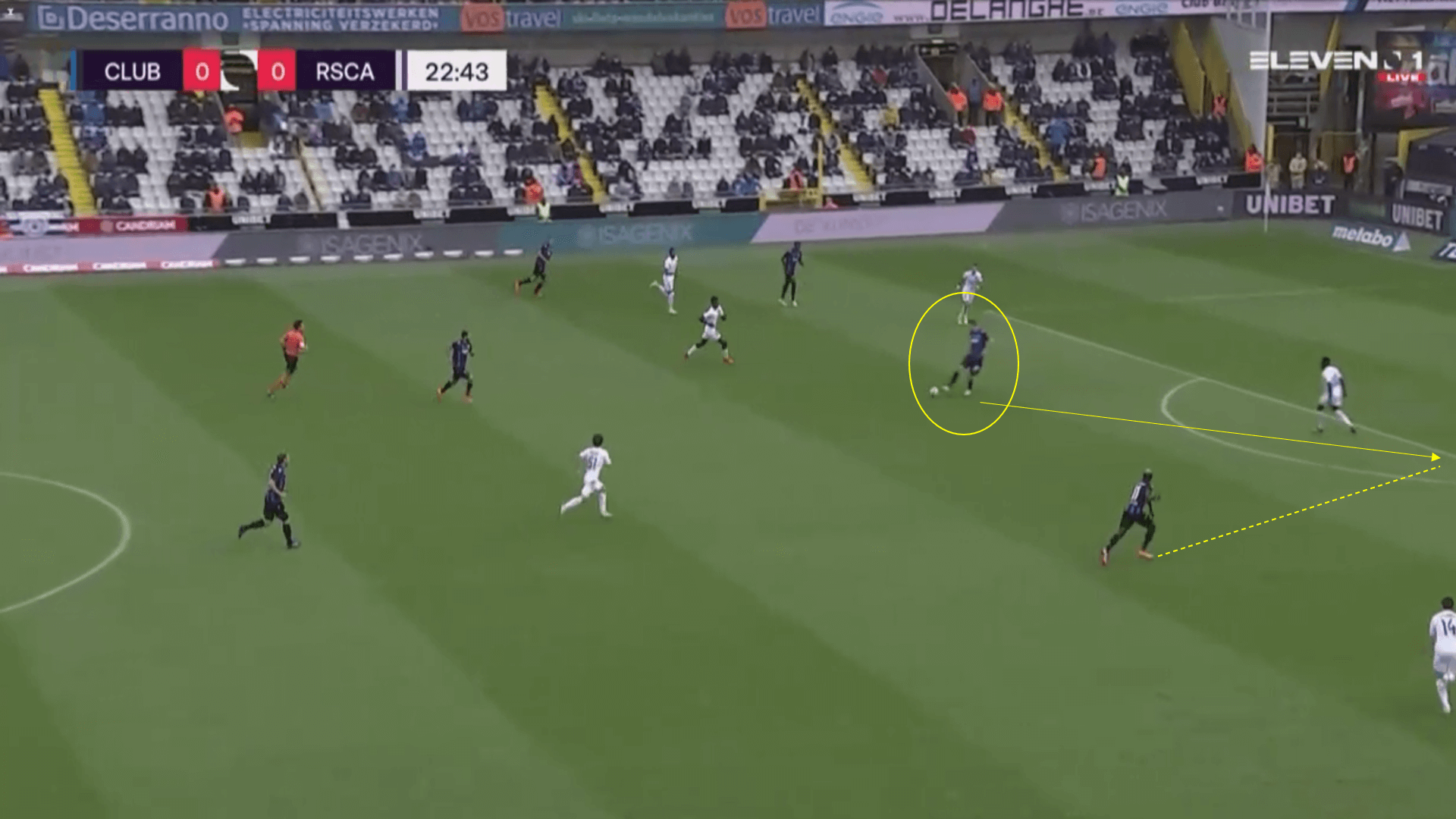 Vanaken is one of the best passers of the ball in the Belgian League and makes no mistake in finding a wide open Diatta. Brugge like to keep Diatta high when pressing for moments like this where he can capitalise on any mistake. Even if the ball evades the press of the Senegalese winger, he is usually fast enough to catch up. This time, he and Clement were rewarded for their pressing game by forcing a mistake and taking advantage. 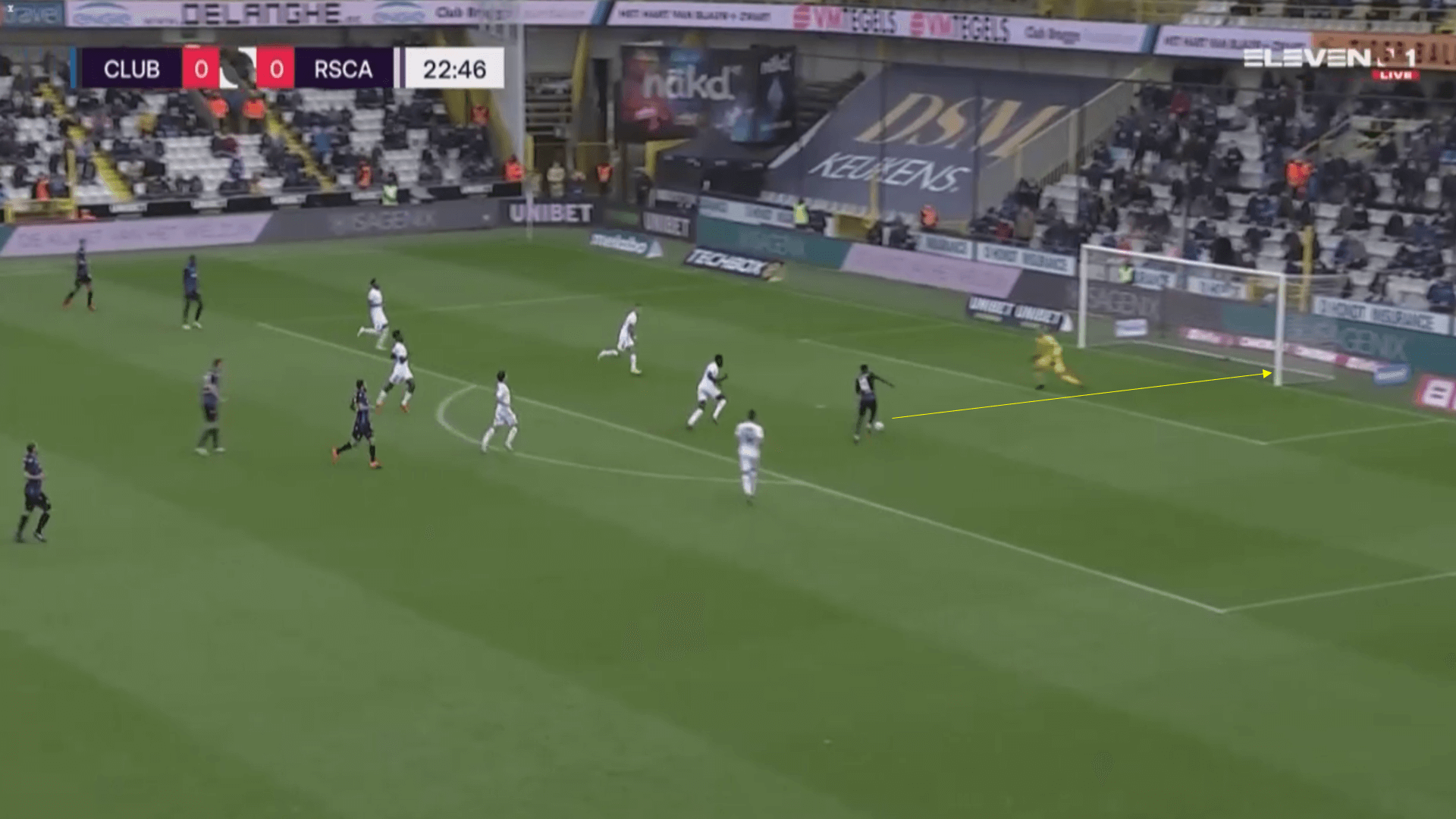 Anderlecht appeared to struggle without the dribbling and pace of young Jeremy Doku. Their first half xG of 0.15 as a team summed up their inability to worry a strong Brugge defence. In the first half, their centre-backs saw most of the ball, with their passes usually coming straight back to them from a midfielder or striker dropping deeper to give an option.

Finding passing options to progress the ball forward for Anderlecht’s defenders proved a struggle in the first half, as there appeared to be little on when they were on the ball. With Brugge pressing, and them wanting to play out rather than go direct, this made it difficult for the team to create opportunities.

For example, this free kick in the 28th minute below shows how few options there were. There appears to be barely any options for the man on the ball to go forward. We see at the bottom that Mykhaylichenko appears to be so wary of getting caught out by Diatta again that he isn’t pushing up to create an option on the left-hand side. In the forward positions, we see two players standing directly next to each other, not creating any space or looking to move to create an option. 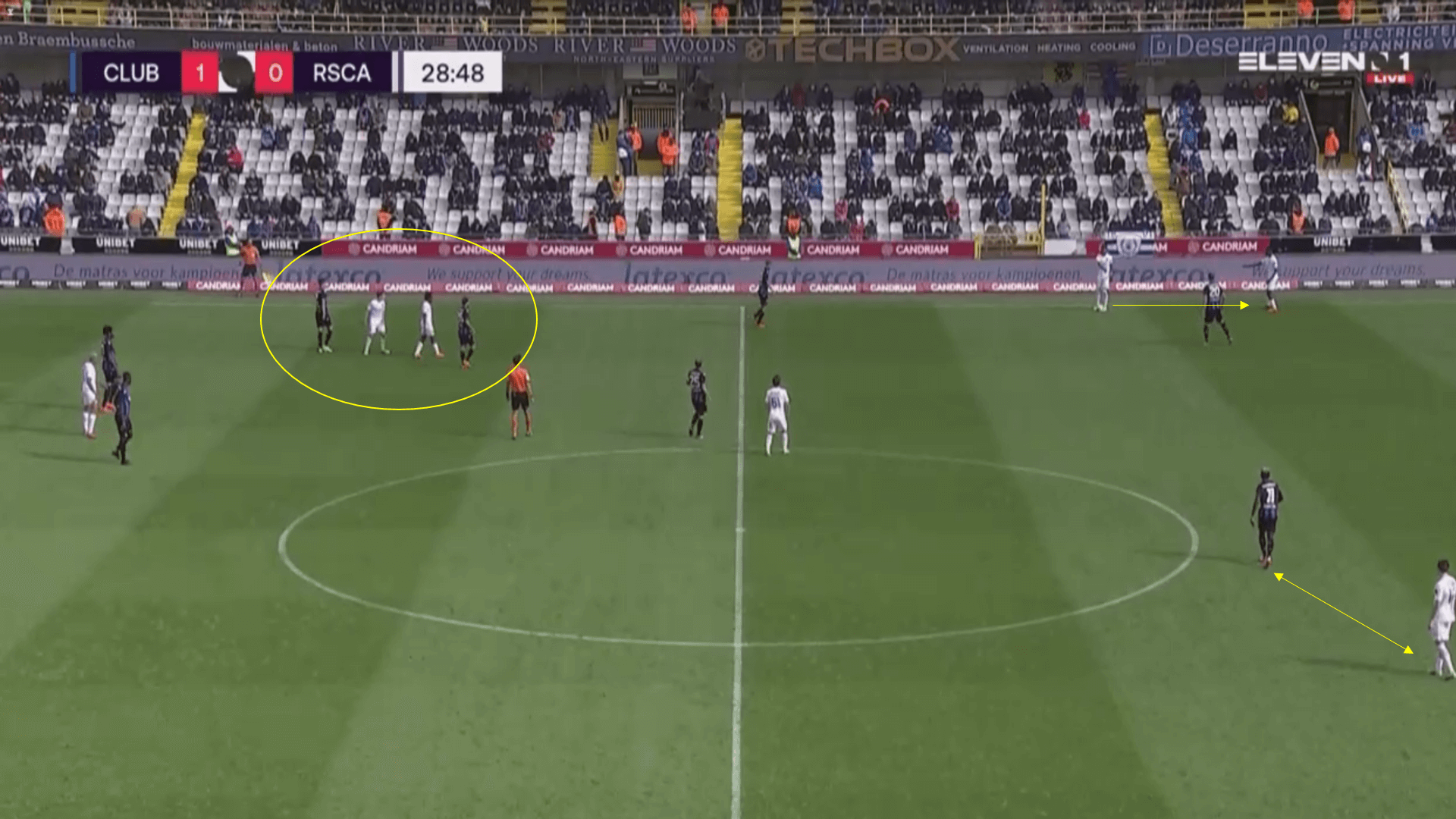 The ball is eventually played short to Lokonga, the man just behind the free-kick taker. This allows Brugge to push up again and press Anderlecht, who end up conceding a throw-in deep into their own half, on the opposite side of the pitch to where they had a free-kick.

One issue that Anderlecht had was that they couldn’t be as direct with Tau and Nmecha upfront, neither of whom were effective in the air against the likes of Deli and Kossounou. Nmecha and Tau both won only one of the five aerial duels they both faced. Deli won five of the six duels he was involved in aerially, while Kossounou won three of the four duels he faced.

Even when they had a chance to counter, they found themselves increasingly isolated against a Brugge team that were working hard to get back into shape. Below, we see Mykhaylichenko finally having an opportunity to get forward, after intercepting the ball during a Brugge attack. However, he has no support or options ahead of him, partly due to the fact that the rest of his side are on the opposite side of the pitch, but also partly due to the hard work of Diatta and Mata to close him down. 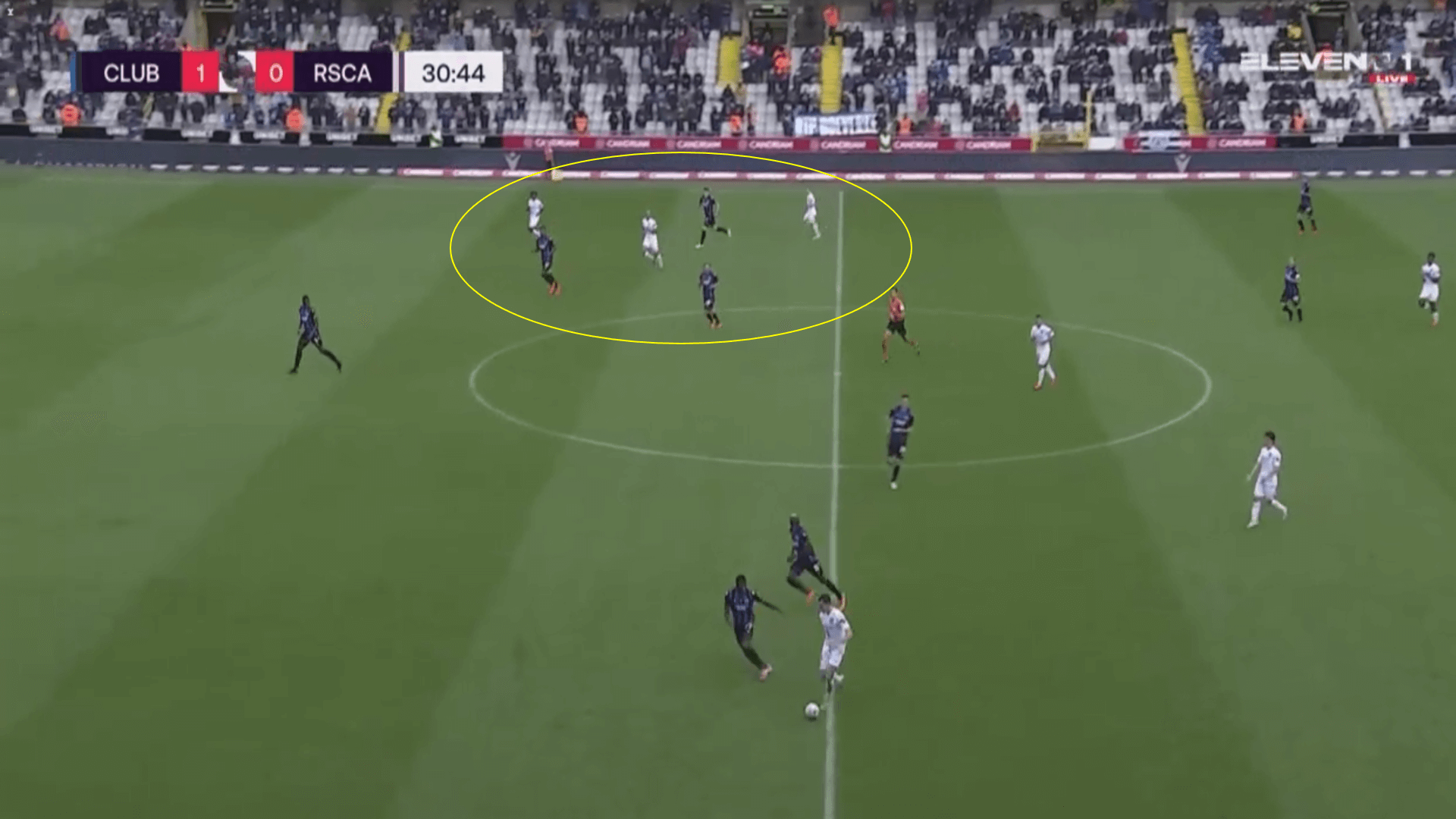 All in all, the pressing game of Brugge, as well as Anderlecht’s apparent lack of a plan B and ability to play through it, meant they struggled to create any meaningful attacking opportunities in the first half.

Vormer and Vanaken are two of the better playmakers in the Belgian league. With Rits willing to sit back, they are both given creative license to drift around the pitch, in order to link attacking moves and give defenders problems. Anderlecht struggled to deal with the two players, whose movement was difficult for them to defend against.

We have already seen how Vormer was happy to push forward to press ahead of Vanaken, despite originally lining up as part of a two-man central midfield, alongside Rits. When we look at the below image, we see the three players highlighted. While in defence it may have been more of a 4-4-1-1 formation, when attacking, they moved to more of a 4-1-4-1 formation, with Vormer pushing on ahead. 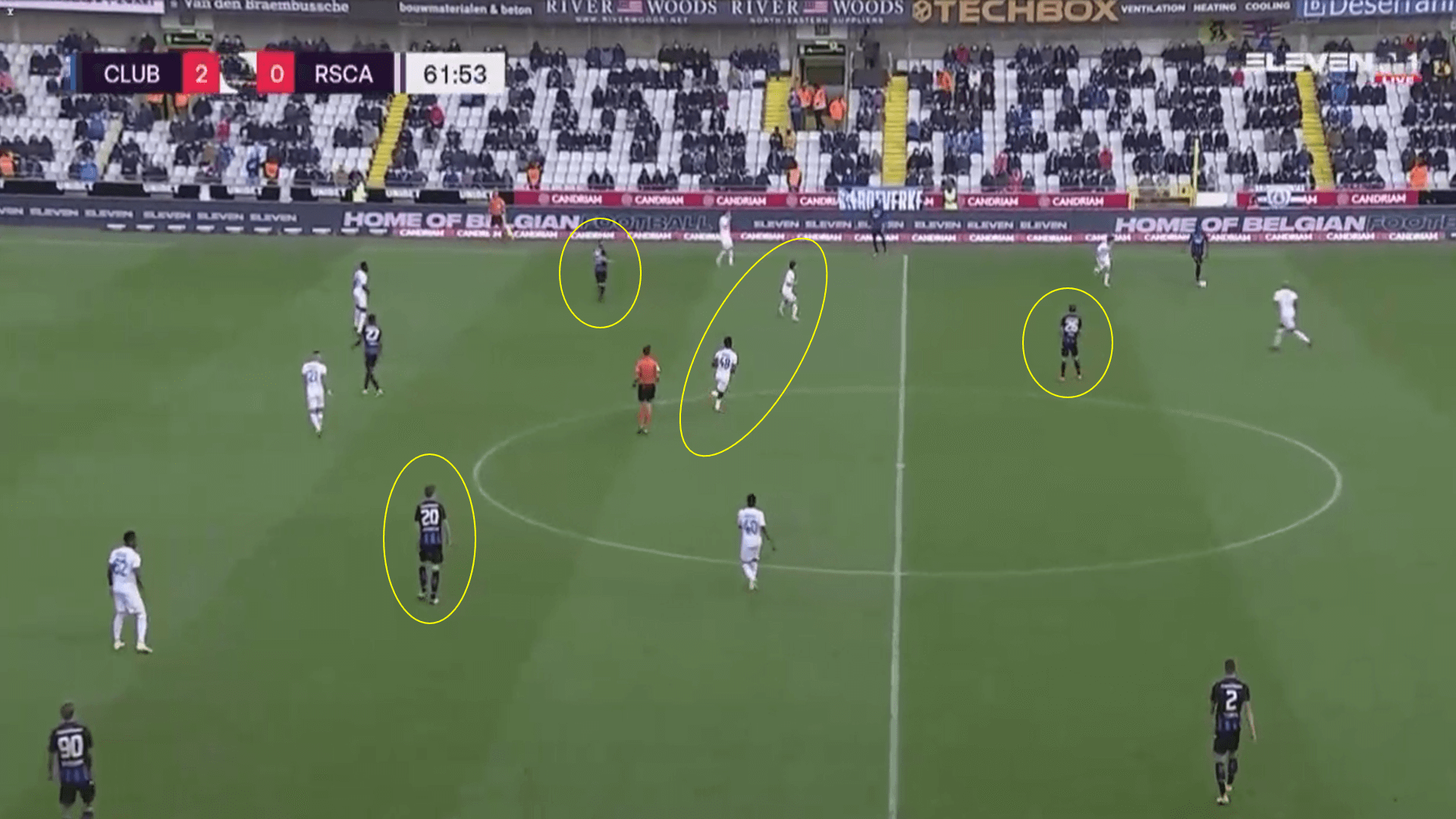 This caused problems for Anderlecht, as their 4-4-2 formation struggled to match up. We see from the image above the issue, as, if Brugge get past the two central midfielders of the away side, they had a four-on-four matchup, which could easily be five-on-four with Diatta pushing up on the right.

However, in other situations, they would change, with Vanaken or Vormer dropping deeper to become more of a deep-lying playmaker. As we see below, Vanaken hasn’t even crossed the halfway line, despite being the attacking midfielder on the team sheet. 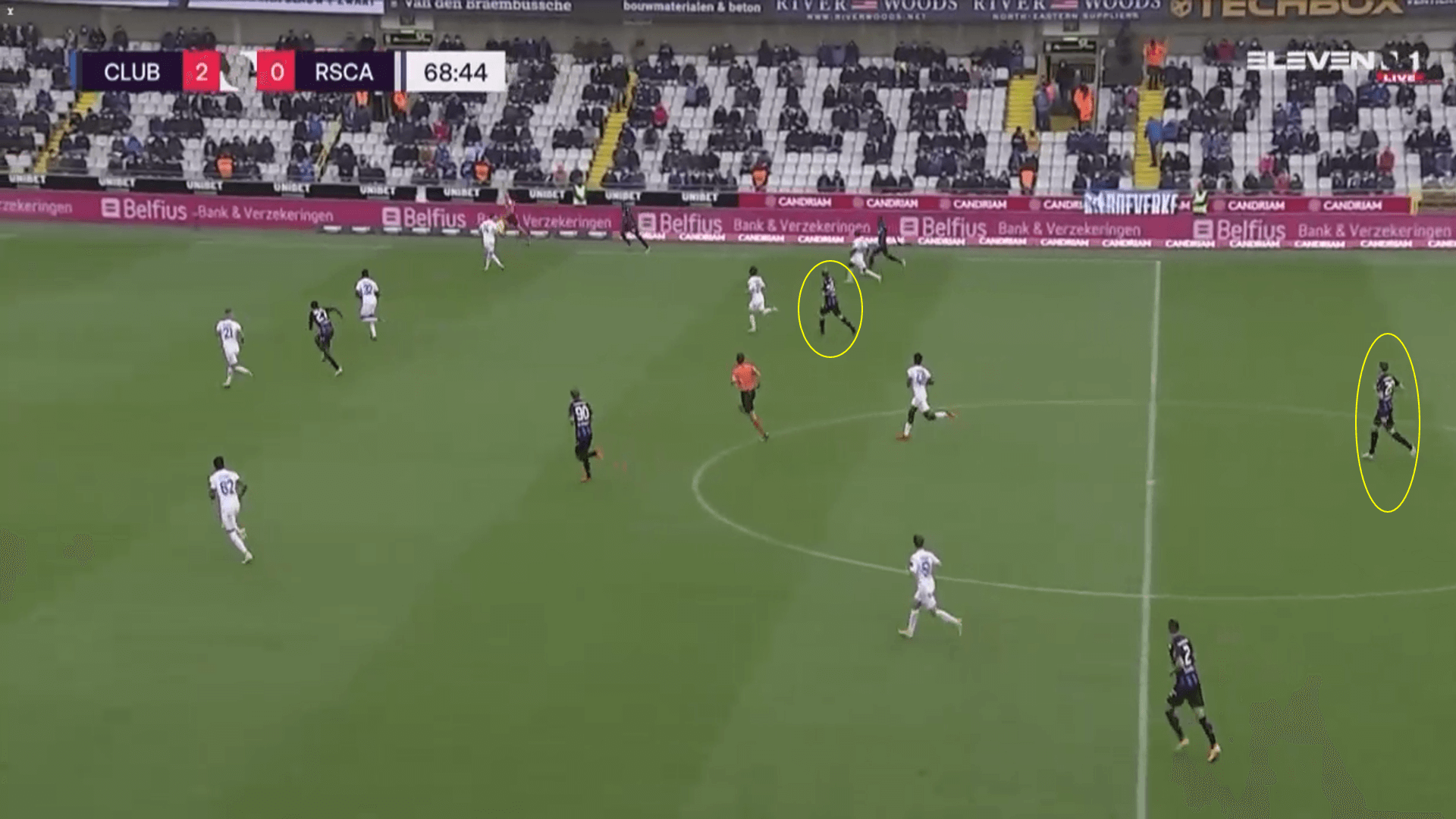 Players of Vanaken and Vormer’s ability need to be watched closely, as giving them too much time and space on the ball allows them to create chances. Their constant movement and ability to push or drop deep seemingly at random during the game caused Anderlecht all sorts of problems, as they were unable to stop them. Vormer especially was excellent throughout the game, exploiting the space in behind the central midfielders, in order to create opportunities for Brugge. The captain capped off a dominant display with a wonderful free-kick at the end of the game to seal a 3-0 victory.

This was the first real test of Anderlecht under Kompany, to see how far they had come since he took over a few games into the new season. Clearly, there is plenty of work to be done if Anderlecht are going to return to being one of the big names in Belgian football, capable of challenging the likes of Brugge for the title.

The hosts were dominant in this game and were able to nullify Anderlecht’s attacking opportunities. They look back to their best, and the form of both Vormer and Vanaken should worry the rest of the teams in the league. Clement and his team will have been delighted with how they were able to dominate the game from start to finish, and the score line reflected that.