Club Brugge hosted Serie A side Lazio in the second round of the UEFA Champions League group stages. The Italian giants’ squad had been decimated by COVID-19, making the team from Belgium favourites to take the three points in this tie.

However, the game ended 1-1, with both sides sharing the points and remaining unbeaten in the group. Lazio will certainly be the happier of the two sides with the result, and their tactics certainly frustrated Brugge in the first half.

This tactical analysis will look at how Lazio were able to play out of the Brugge press in the first half, as well as how they were able to sit deep and nullify the Brugge attack. Finally, this analysis will focus on how Brugge’s patience in the second half allowed them to create more chances. 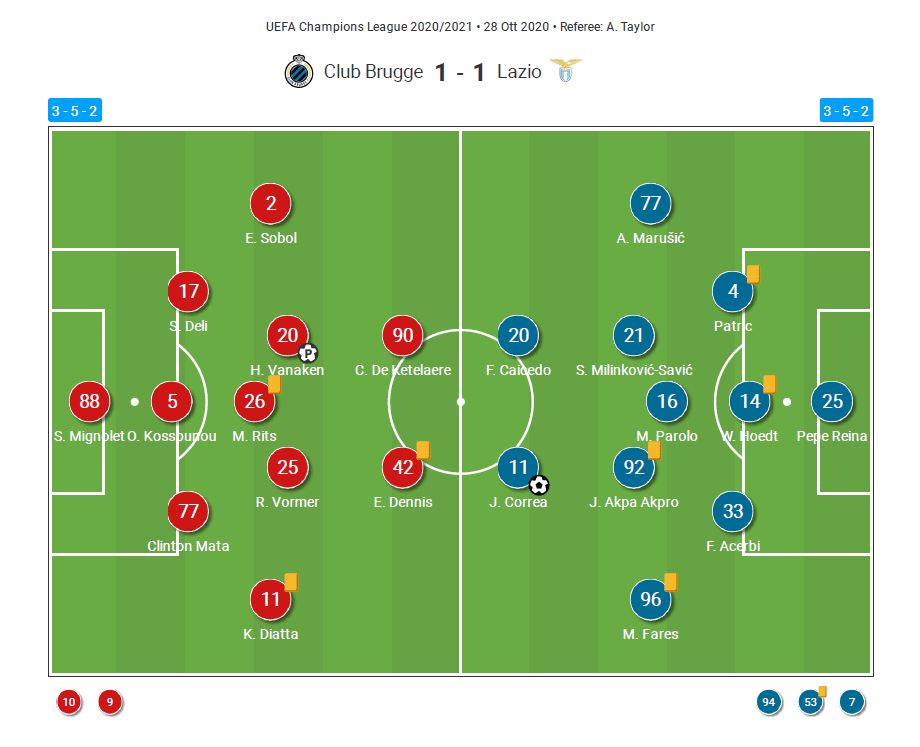 Phillipe Clement set up his side in a 3-5-2 formation, with former Liverpool goalkeeper Simon Mignolet returning in goal. Clinton Mata, Odilon Kossounou and Simon Deli made up the three-man defence. Krepin Diatta and Eduard Sobol were the wing-backs, with Mats Rits, Ruud Vormer and Hans Vanaken as the usual three in central midfield. First round goalscorers Emmanual Dennis and Charles De Ketelaere were the two up top.

Lazio’s depleted squad meant that Simone Inzaghi was unable to put his regulars out in the 3-5-2 system. Pepe Reina was in goal, with Wesley Hoedt, Patric and Francesco Acerbi as the back three. Sergei Milinkovic-Savic, Marco Parolo and Jean-Daniel Akpa Akpro were the central players, with Mohamed Fares and Adam Marusic providing the width. Felipe Caicedo and Joaquin Correa were the front men.

Playing out of the press

Brugge were looking to press Lazio, especially from goal kicks or set pieces in their own half. However, Lazio were intelligent in playing out, despite having the size of Caicedo up top, who they could have gone direct to. It was clearly a plan of Inzaghi to stick to these principles. Being able to play accurate switches was crucial for making this tactic work.

From the first minute, it became clear what the tactic was for Lazio. Reina has found his left central defender in a very deep position on the left. We see that Brugge have done well in getting players up to try and pin Lazio in deep and force them into a long pass, which may help win possession, or try and force a mistake from the possession play. 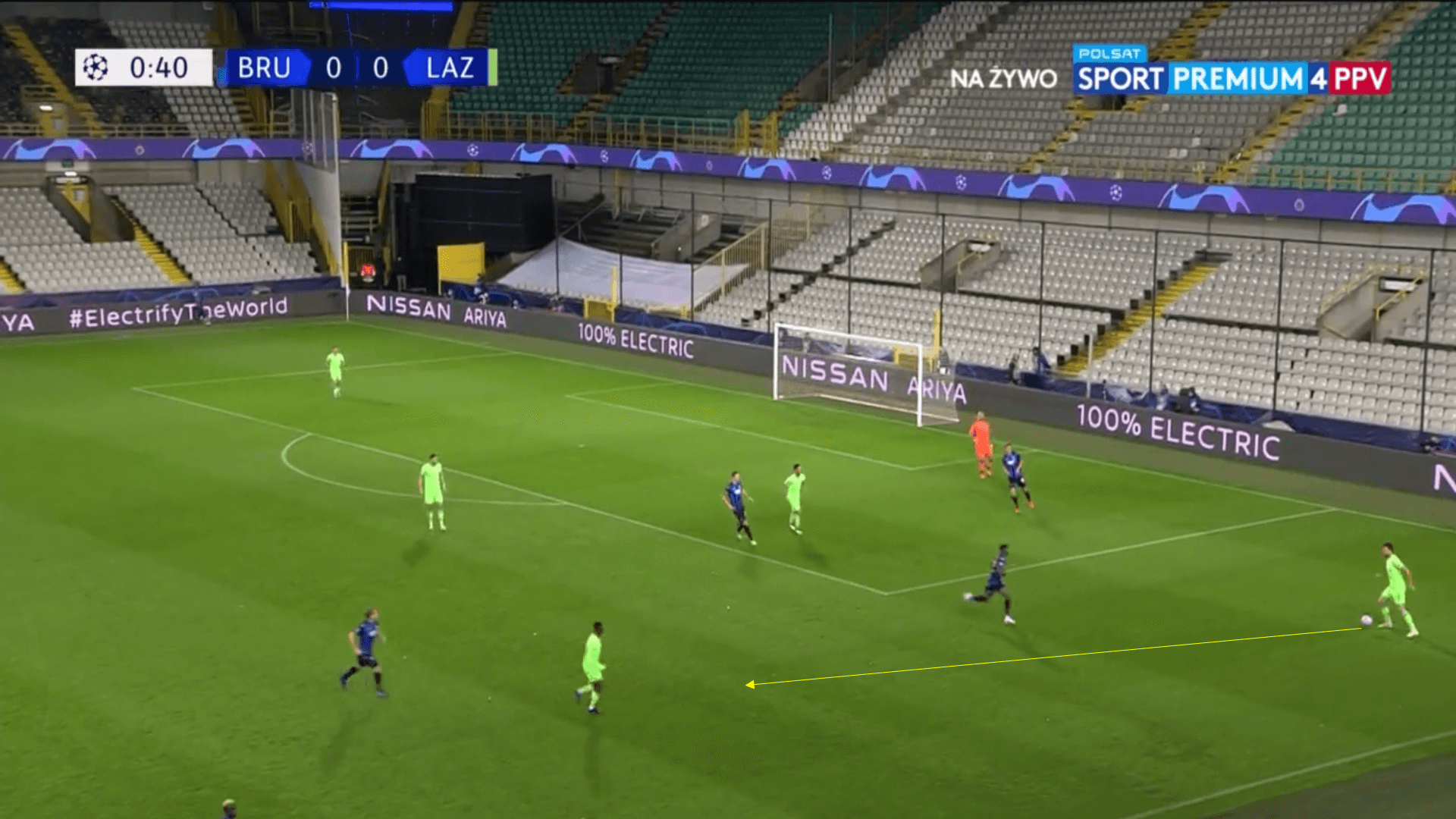 When Akpra-Akpro gets the ball, we see that nearly all the options to him close by aren’t on. However, Patric, highlighted on the opposite side of the pitch, is the pass that is on. The Lazio midfielder is confident and able to find this pass to release the pressure and get Lazio up the pitch. 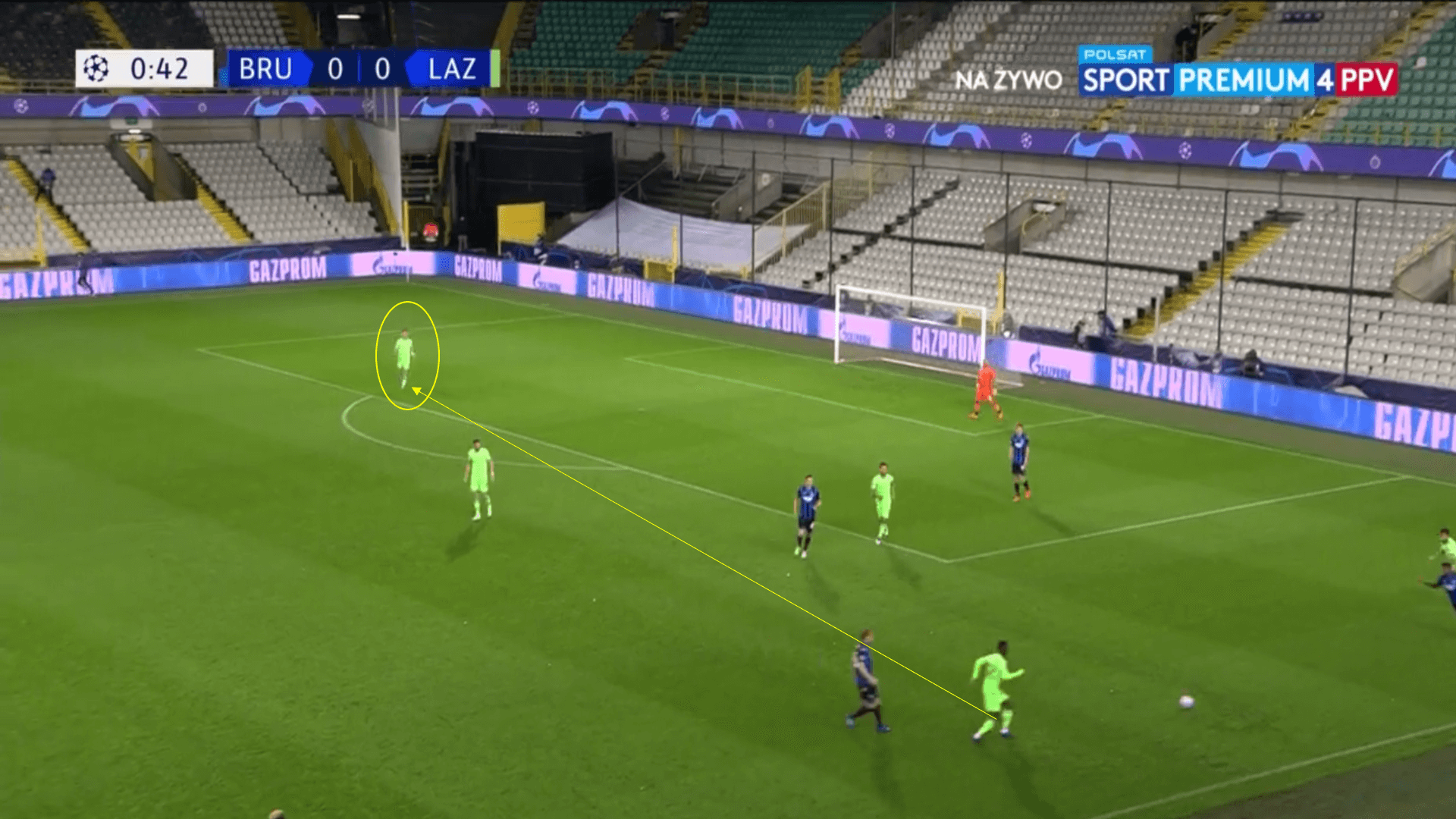 When we look at the passing stats for the Lazio defenders, they also reflect how well they did in terms of passing and playing out against the Brugge press. In terms of lateral passes, more than likely between the three of them, Patric had 86% accuracy, Hoedt also had 86% and Acerbi had 93%. The tactic to keep it short was clearly a preference when we look at their long pass accuracy, with Hoedt and Patric only managing three accurate passes out of the nine they attempted between them. If a switch of play was required, like above, then a midfielder would drop deep to play the pass.

While it didn’t lead to them creating loads of chances or keeping Brugge on the back foot, it allowed Lazio to frustrate the home side by keeping the ball for longer periods. Brugge clearly knew that, with all the players their Italian counterparts were missing, they were favourites, and needed to force the issue.

After taking the lead through a fantastic Correa strike, Lazio were happy to sit deep and restrict the spaces for Brugge. Lazio wanted to force Brugge into the restricted spaces in the midfield, which Brugge struggled to operate in during the first half. Lazio’s pressing intensity was 16.6 in the first half, a clear indicator of their willingness to sit off their opponents.

Both Dennis and De Ketelaere are not natural strikers, as they are usually deployed out wide. However, both players were coming towards the ball to try and get involved in the build-up, which meant they had no more than one player in the box when a cross came in, which usually wasn’t one of the strikers.

Below, we see this problem, with Brugge having a throw in wide on the right-hand side. Both Dennis and De Ketelaere have come over to support, which may help create options, but we see now that they have no-one in the box. Therefore, if a cross were to come in, Lazio are in no danger of conceding. 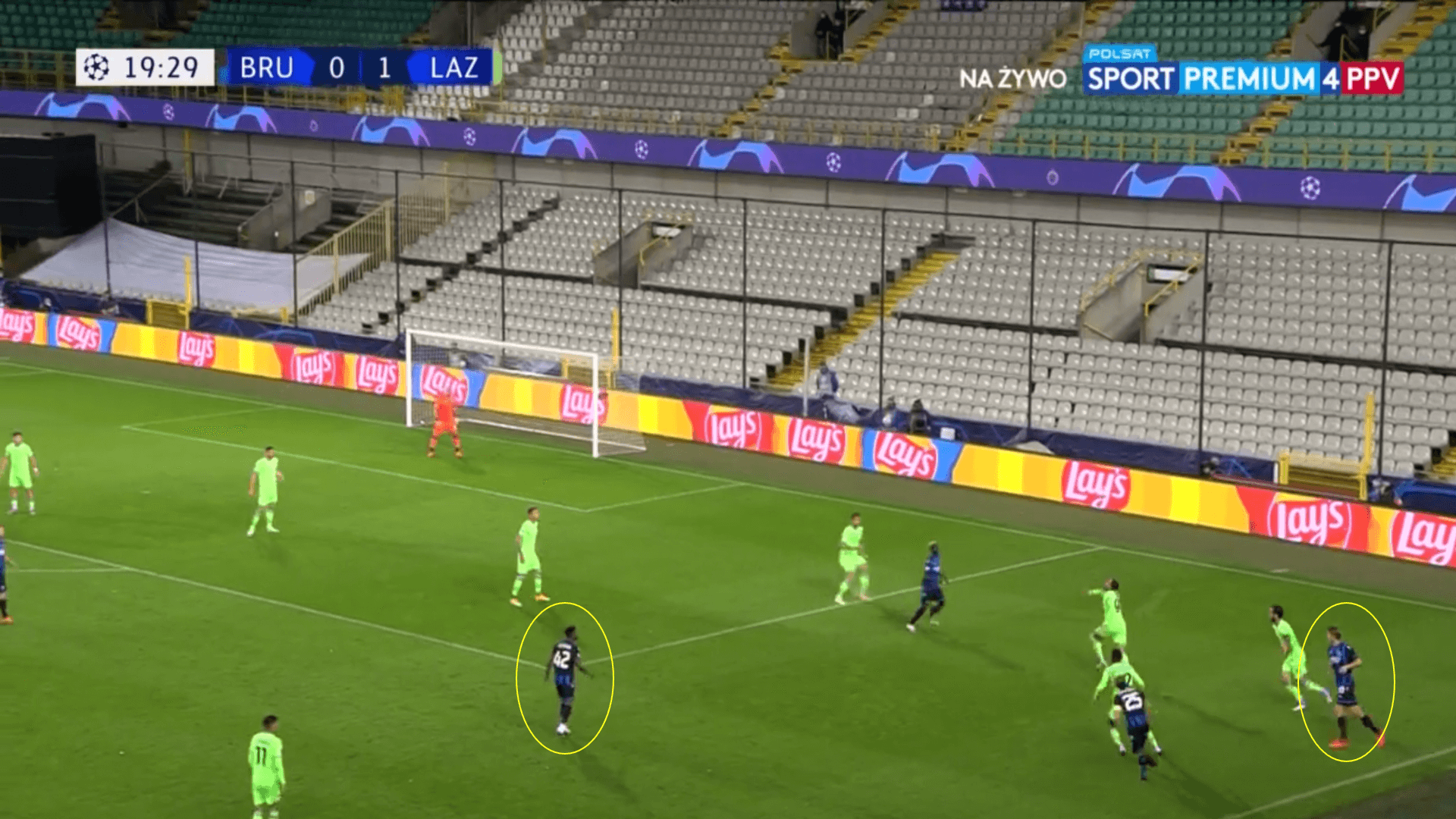 Another situation, just minutes later, sees Dennis about to cross the ball, with no-one in that central area where a striker would usually operate. De Ketelaere had dropped in to help support the play earlier, but now, when the ball is coming into the area, he is not even in the picture. We also see Rits, on the edge of the box, not pushing in to support, while Diatta is the only real option at the back post. Ultimately, the cross from Dennis doesn’t even beat the first man, but there were few options for him to aim at. 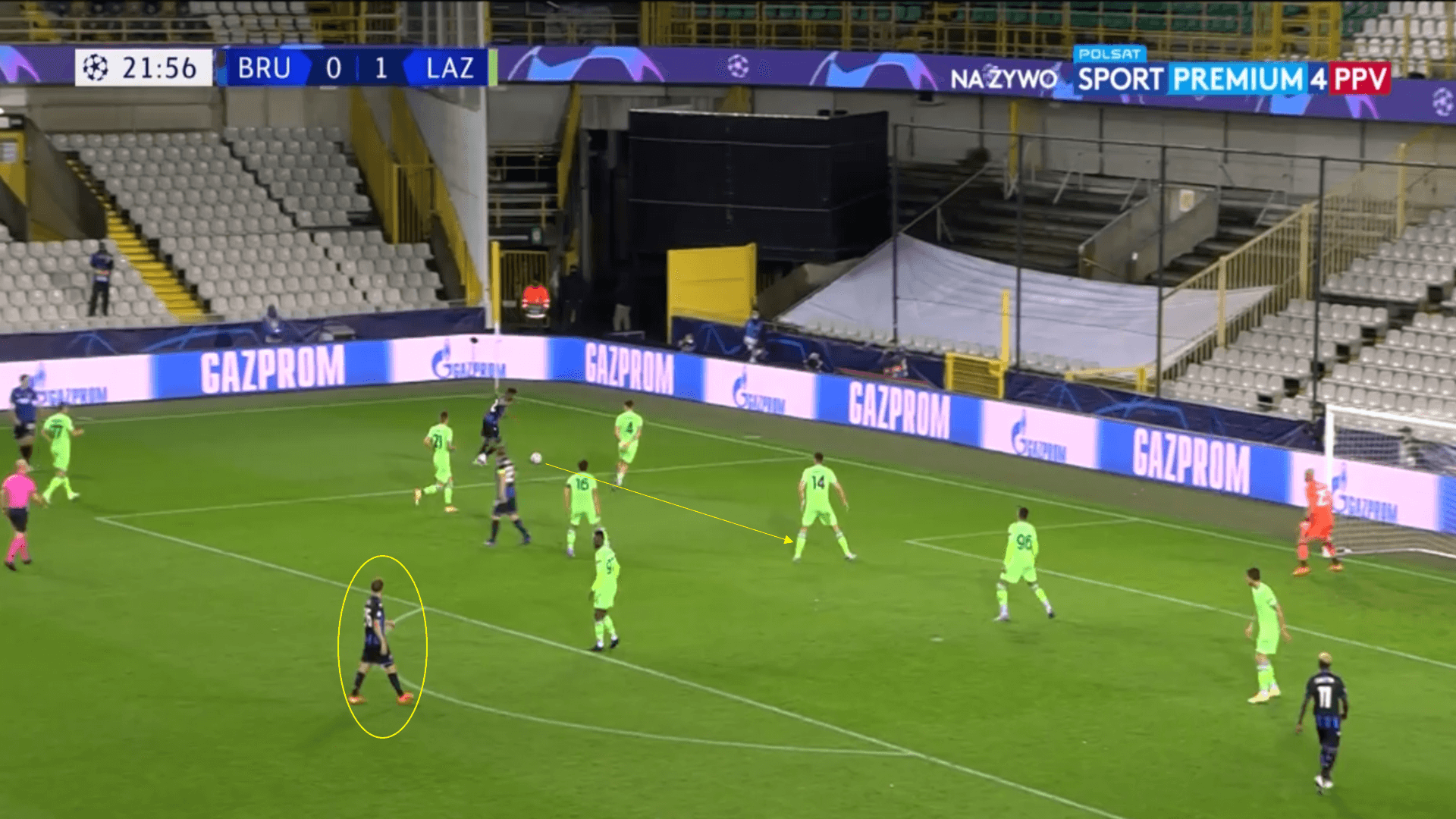 While Brugge managed to win a penalty and get back into the game just before half-time, their attacking approach needed to change. Either they needed to bring on a striker, or they needed to make better decisions in the final third to create chances. What we also see above is how many players Lazio have in the area defending, with seven of the 11 in the box. Brugge really struggled to break the Italians down.

In the second half, it was clear that Brugge changed their attacking approach, with far less crosses coming in when there was only one man in the box. Instead, the Belgian side were happy to recycle the play to create a new opportunity if, during the first phase of the attack, there wasn’t really a goalscoring opportunity on. This helped create better chances, as their xG numbers suggest. In the first half, when they struggled, their xG was 0.97, whereas, in the second half, this went up to 1.24.

As we see below, just under 10 minutes into the second half, Vanaken is on the ball on the right-hand side. Again, no one is in the box, and although he has shaped to cross, he decides against it, as Diatta, the only man near the area, is outnumbered by the Lazio defenders. 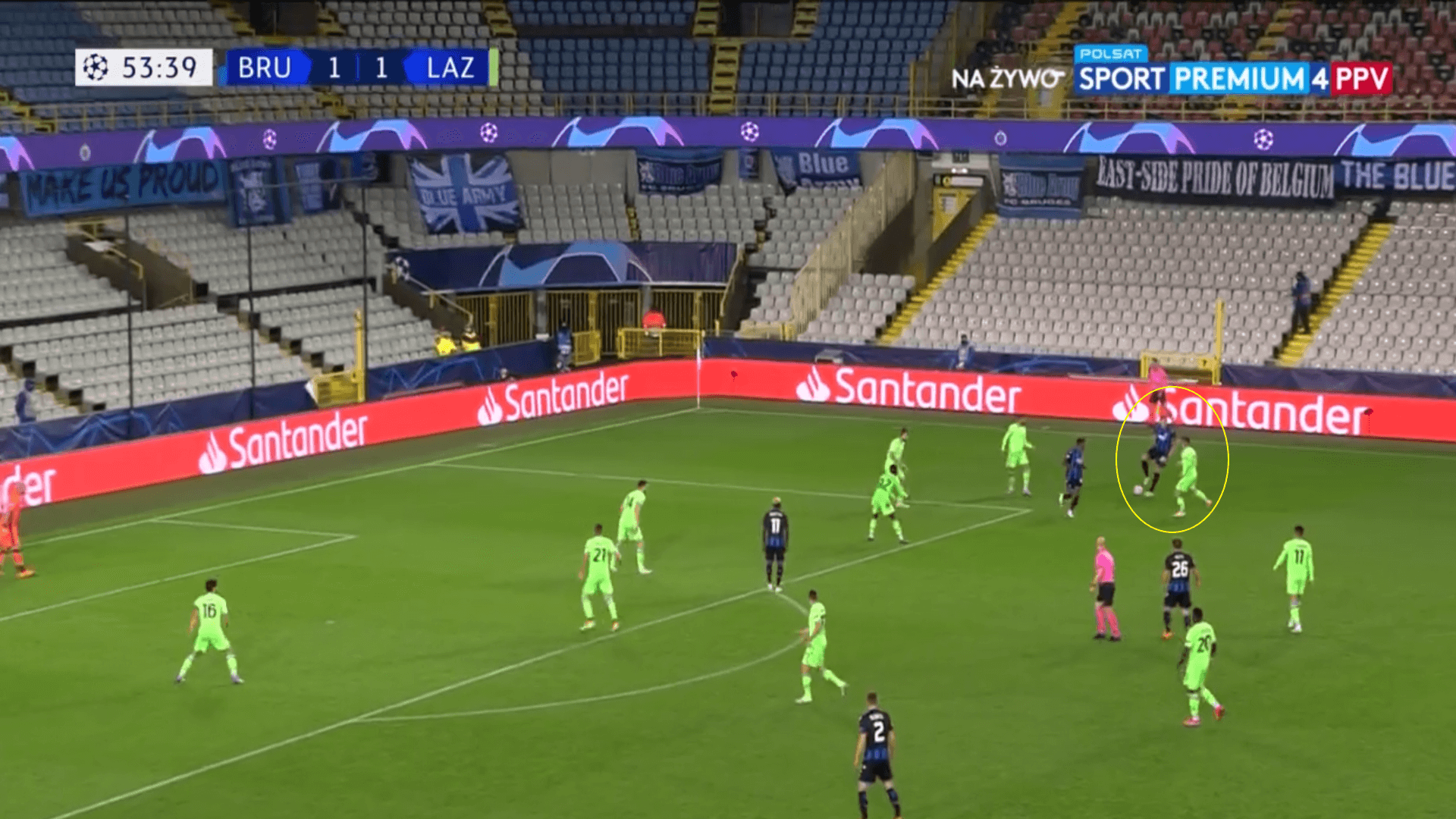 Brugge then show great patience, which was typical of their second half approach. Instead of forcing crosses into the area like they did in the first half, they waited to create a better second opportunity. The ball is worked backwards, with Deli eventually receiving the ball. We now see that Brugge are stretching the Lazio defence, which is again sitting deep, with all 10 men behind the ball, mostly concentrated on that right-hand side, giving plenty of space to Sobol on the left-wing. 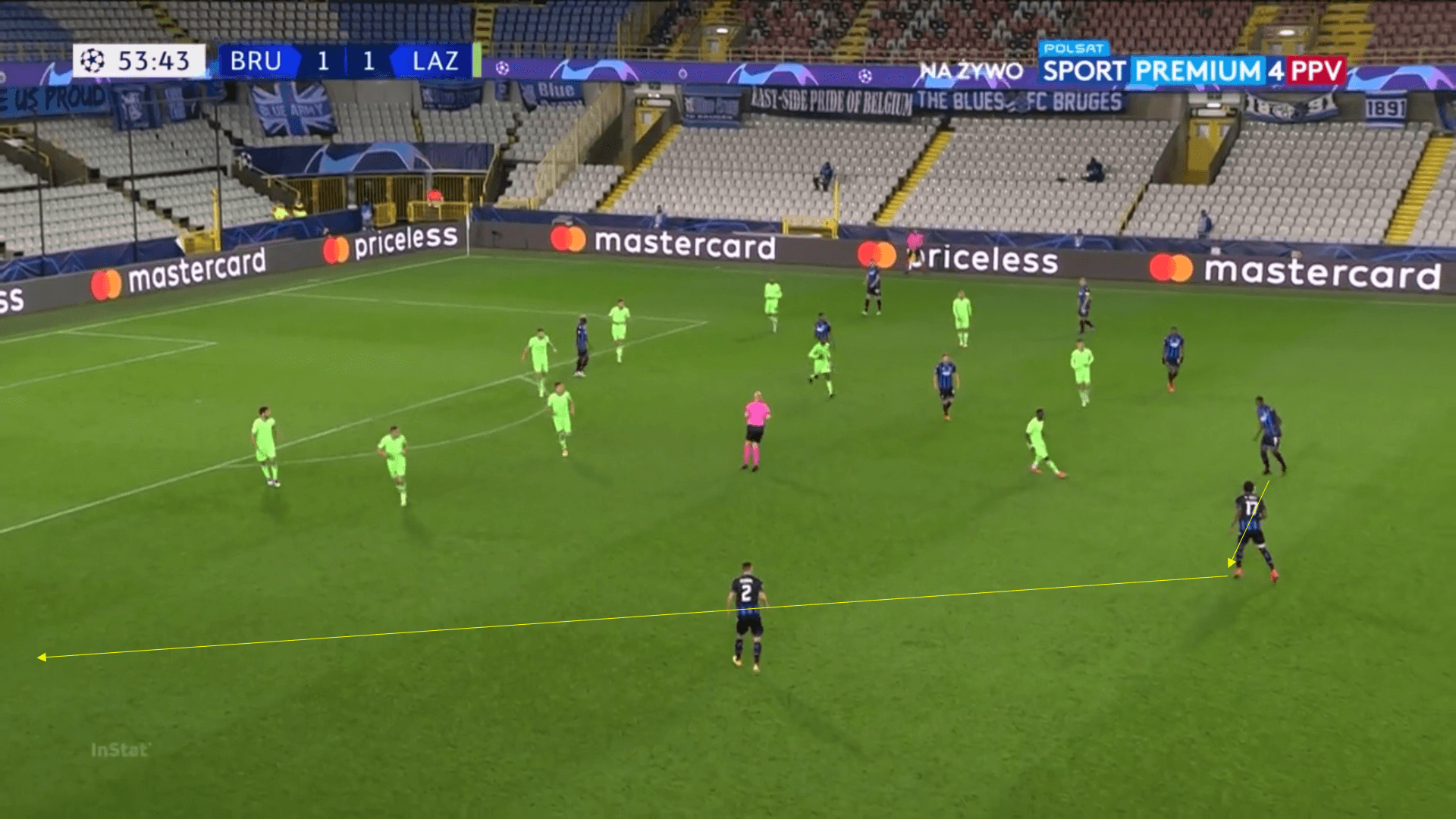 Deli skips the pass to Sobol, and finds De Ketelaere who has moved wide left. By skipping out Sobol, Deli is increasing the pace of the attack and stretching the defence more. We now see that there are already more options in the box, as the Brugge players on that side are now in a better situation to receive the cross. 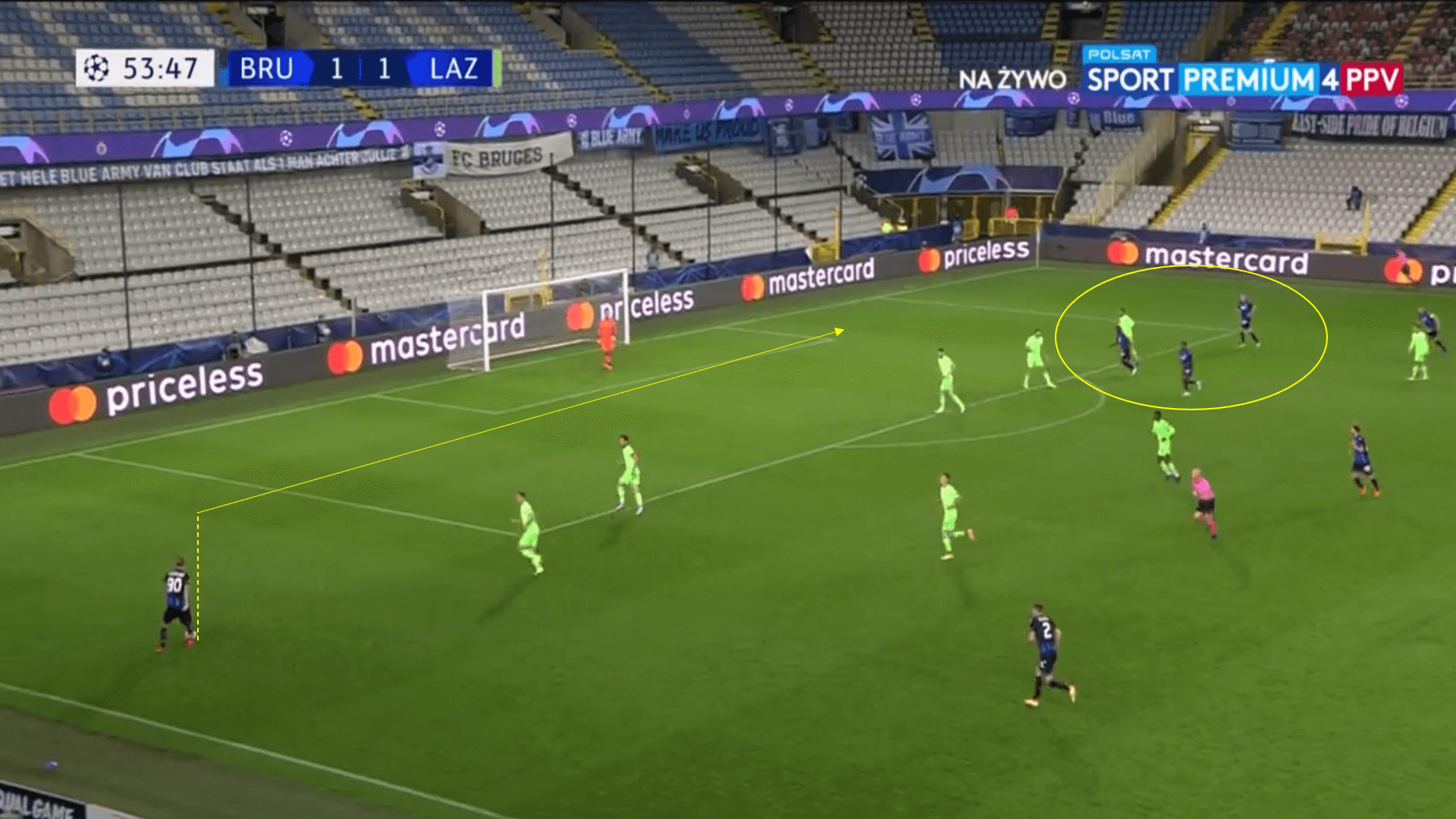 The cross from the youngster is excellent, and finds Vanaken at the back post, who unfortunately isn’t able to create another chance or find a shot on goal. Yet, when we compare this below image to the first half, we see that Brugge have four players in the box, matching up with the four from Lazio. This patient approach, and better working of the ball from side to side to create opportunities and get men into the box, meant that the hosts were able to create much better chances in the second half. 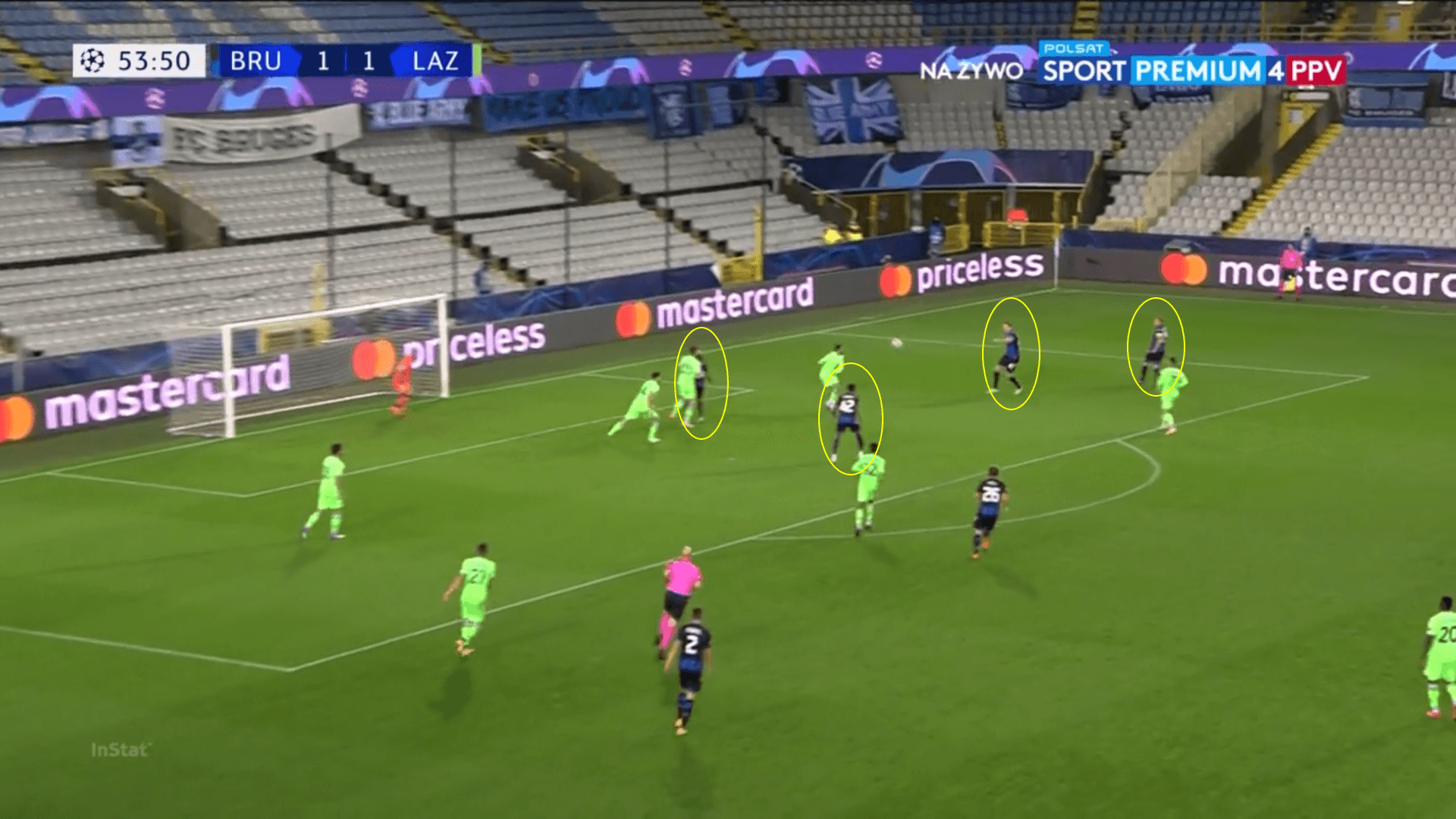 Lazio will be delighted to have taken a depleted squad to Belgium and come away with a hard fought point. They defended excellently, especially in the first half, and really frustrated a Brugge side who, without an out-and-out striker, struggled to put them under any real pressure. Clement’s side were more patient in the second half in their attacking approach, and created better chances and more of them, yet they were unable to find the winning goal.