UEFA Champions League football made a return on Tuesday night, with Zenit St Petersburg hosting Club Brugge in the early fixture. Last season, neither side made it out of the group stages, with Zenit finishing bottom of their group and Brugge going through to the Europa League. While Brugge were unable to win a game, they did produce a memorable display away to Real Madrid in a 2-2 draw.

With the likes of Borussia Dortmund and Lazio in the group, both sides would have seen this game as probably their best chance at getting points on the board. Brugge were able to return to Belgium with three points with a dramatic late winner. 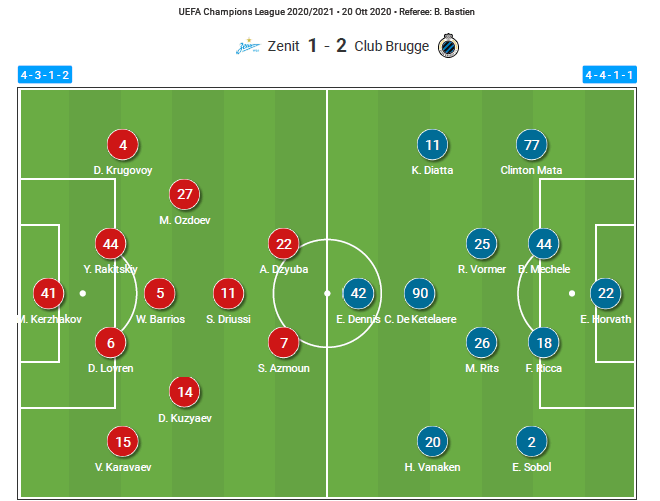 Russian champions Zenit went for a 4-3-1-2 formation, with Mikhail Kerzhakov in goal. Dejan Lovren and Yarsolav Rakitskiy were the centre-back partnership, with Vyacheslav Karavayev and Danil Krugovoy as full-backs. Wilmar Barrios, Magomed Ozdoyev, and Daler Kuzyayev made up the midfield three, while Sebastian Driussi was further forward, in behind the strikers. Artem Dzubuya and Sardar Azmoun were the usual Zenit strike duo.

On the other side, Club Brugge went with a 4-4-1-1. Ethan Horvath was in goal, replacing the regular number one Simon Mignolet. Brandon Mechele and Federico Ricca were the makeshift centre-back partnership, flanked by Clinton Mata and Eduard Sobol. Mats Rits and Ruud Vormer were initially the midfield two, with Hans Vanaken operating more on the left. Dangerman Krepin Diatta was on the right-hand side, while Charles De Ketelare was playing in behind Emmanual Dennis.

Lining up without an out-and-out striker meant that Brugge rarely had a target man they could hit. De Ketelare and Dennis have predominantly appeared on the wings for the side this season, so it was interesting to see how they would do in a more central position. Being unable to go long, Brugge were looking to play their way out from the back.

Early in the first half, we see that Dzyuba and Azmoun have pushed up, but they aren’t being supported from behind. Mata is an easy outlet for the goalkeeper, and the full-back has time to bring the ball down under very little pressure. 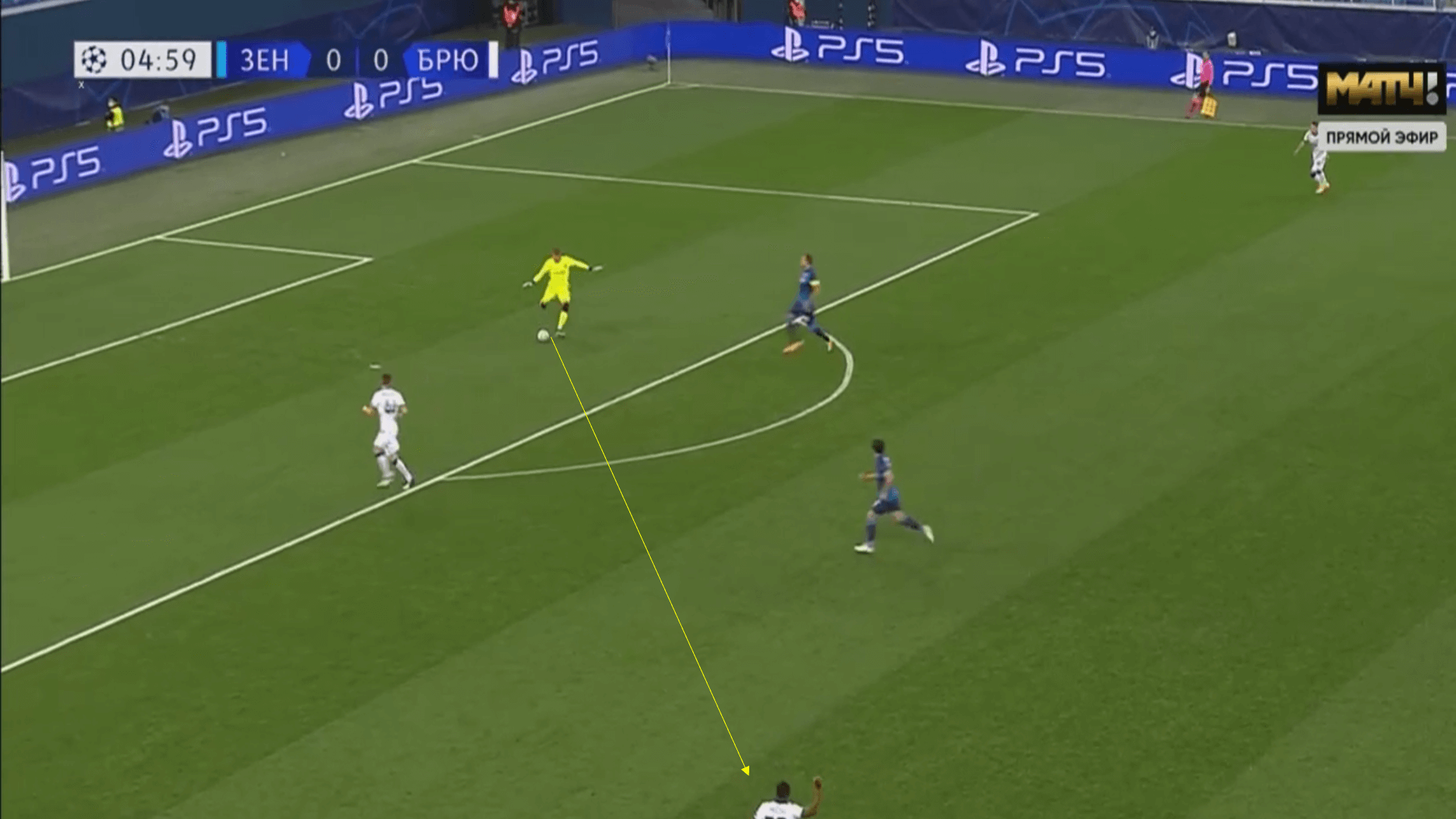 Rits and Vormer have pulled back to support the defenders playing out, giving Mata options inside and down the line. We see how the press of Zenit is not intense enough to disrupt this play, and Brugge are easily able to transition from the goalkeeper to the midfield areas. 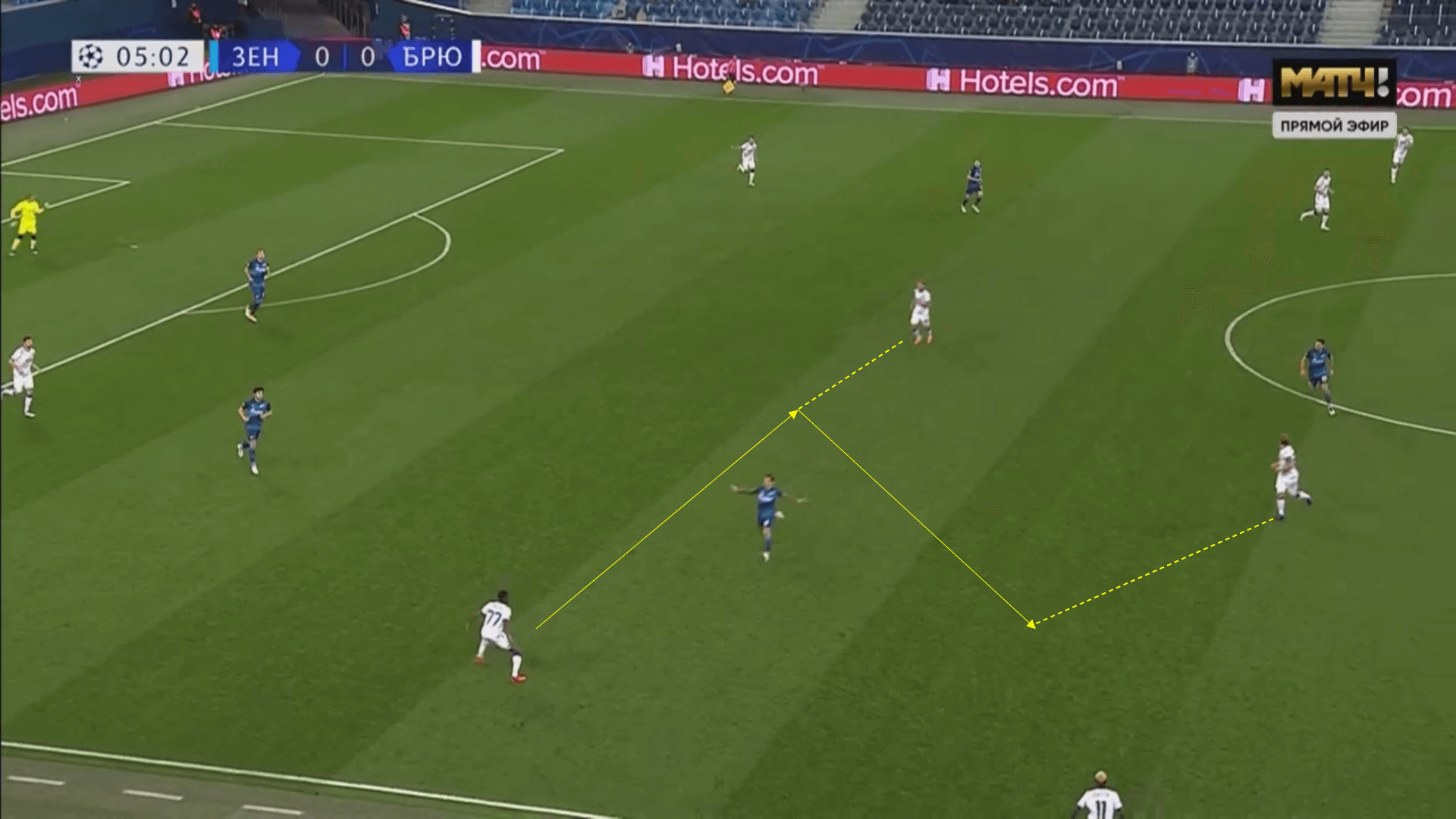 This passage of play in the first half led to a corner for Brugge, as they were able to put together an attacking move under little pressure. While they didn’t always manage to turn these passages into chances, the majority of the first half they were able to use their full-backs as outlets for playing out from the back, with Rits, Vormer, and Vanaken as support passes for transitioning.

Clearly, a switch in emphasis and intensity was called for at half time, and immediately in the second half, the change in Zenit’s tactics was evident. Again, Horvarth has received the ball and is able to find Mata in the wide areas. 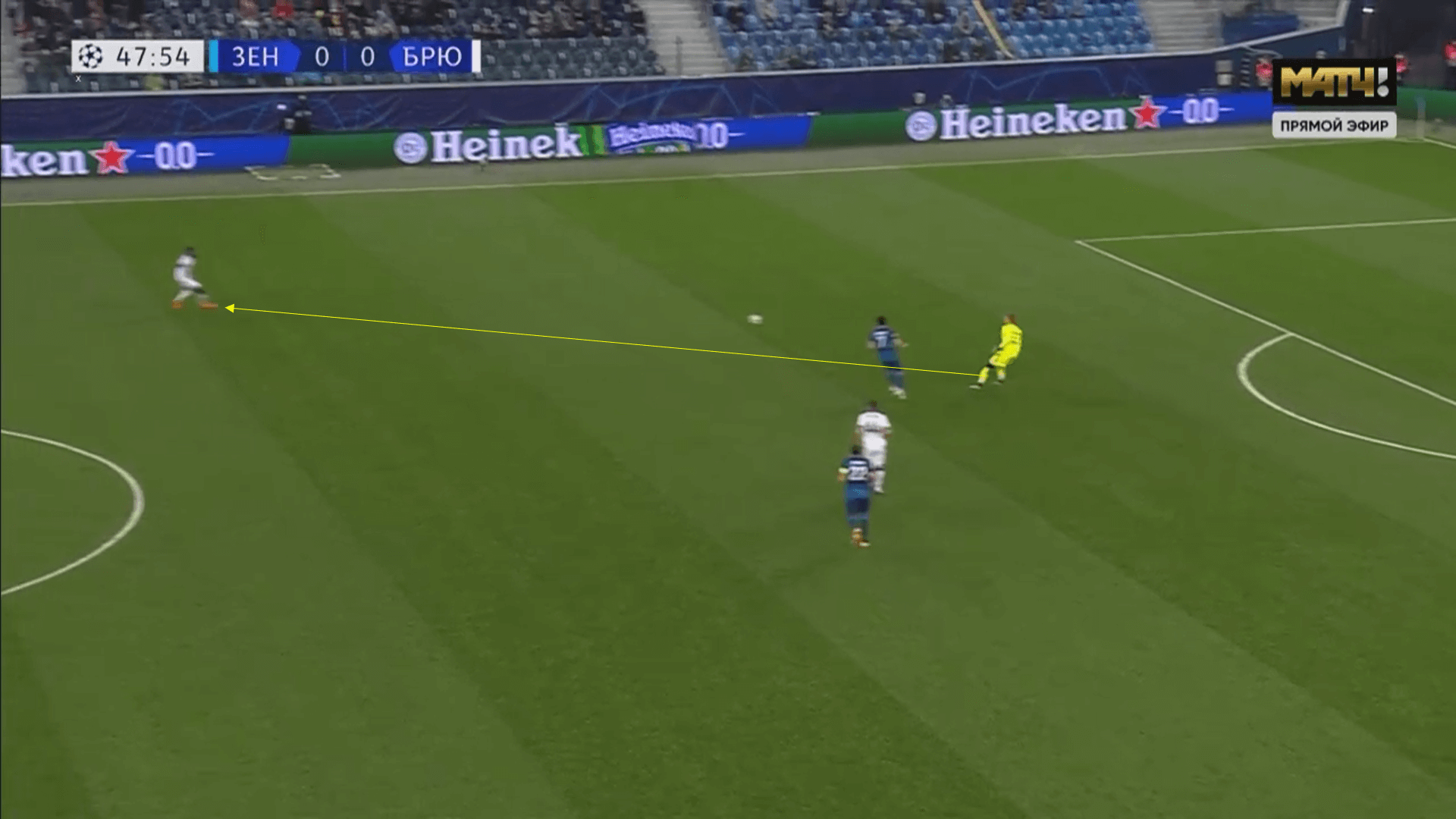 This time, Azmoun has pressed the keeper quicker, forcing the pass to be made quicker. Mata now receives the ball, and, this time, there are two Zenit players working on the press; one cutting off angles and the other going for the ball. 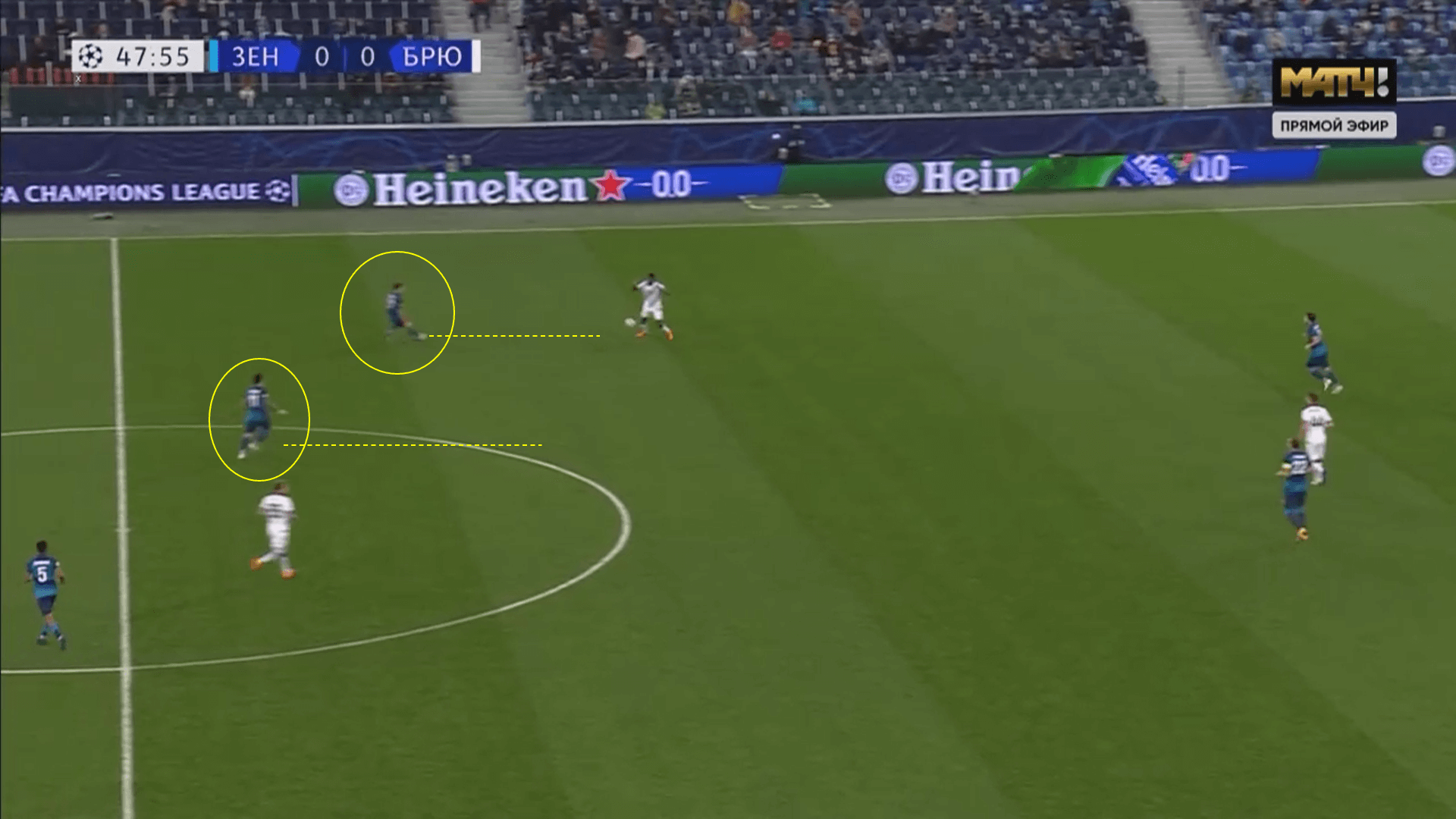 This change in intensity was evident from Zenit, and disrupted Brugge’s ability to play out from the back. It also got Zenit going more in an attacking sense, and they were able to create more chances than they had in a lacklustre first half.

Zenit’s struggles in the first half

As with most first round matches, the game, especially in the first half, was a cagey affair. Zenit, despite having one of the most prolific strike forces in the Russian Premier League, were unable to trouble the Brugge keeper in the first half. Their first half xG according to Wyscout data was down at 0.09.

Their struggles came partly from inaccurate passes and a slow tempo, but also from Brugge getting bodies in and around their main attacking outlets, Dzyuba and Azmoun. While Dennis and De Ketelare did put a reasonable amount of pressure on the Zenit defenders, the team was happy to sit in when they didn’t have the ball. Their 13.4 PPDA is an indicator of this.

Even in the first 10 seconds, it became clear that Brugge wanted to limit the impact Dzyuba could have on the game. As we see, Vormer, the central midfielder, has pulled deep to pick him up, while Rits and Diatta are there to provide support and cut off passing lanes. Vormer is happy to allow more space for the central midfielder he is responsible for, in order to cut off the Zenit forward. 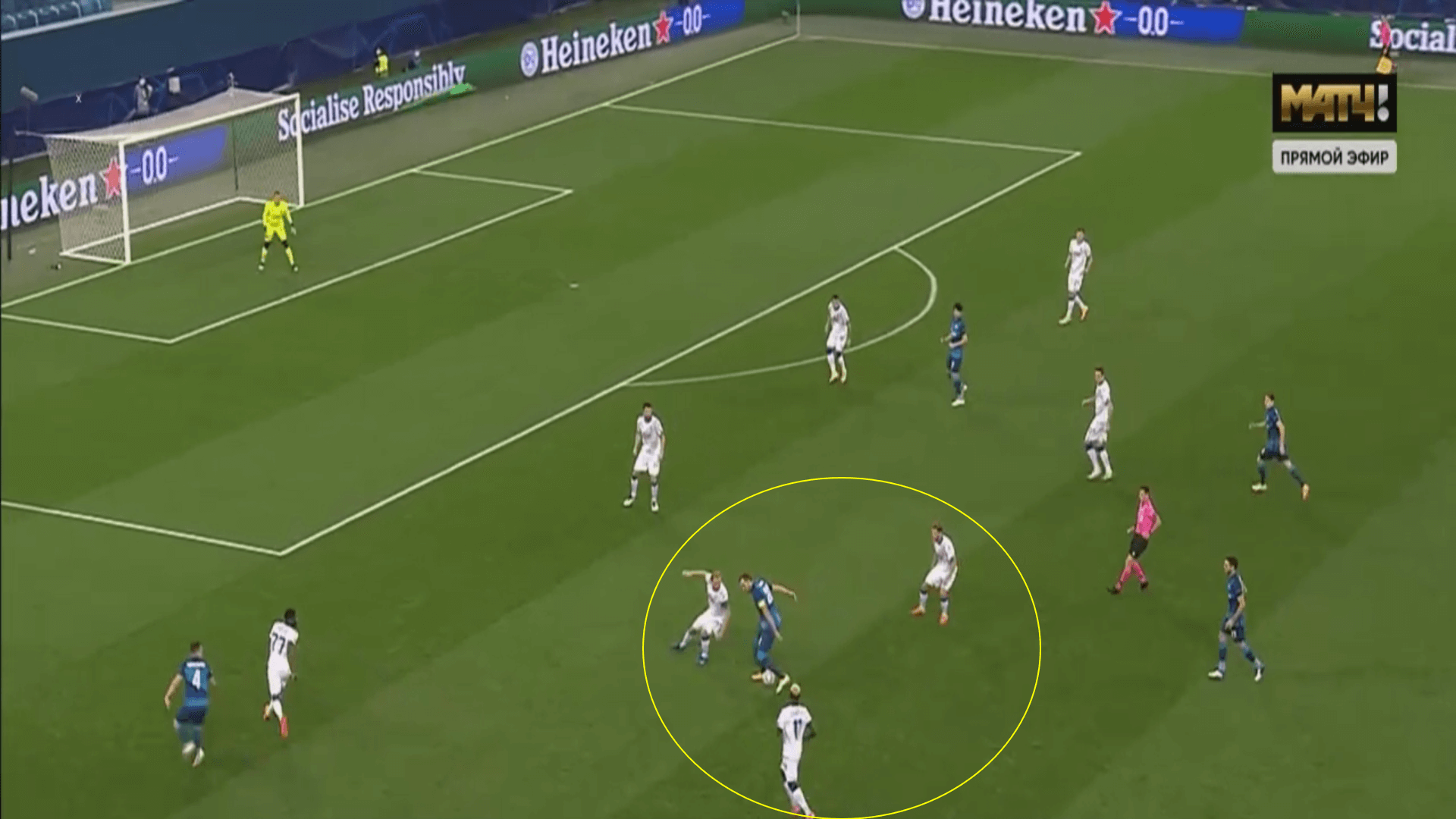 Further into the first half, we see how deep the forward players are dropping to help support the defence. Diatta, at the bottom of the screen, and De Ketelare, at the top, are two of their main attacking outlets. Yet, they have come back to help limit the space for the Zenit attackers. Their presence allows the side to win a throw and regain possession. 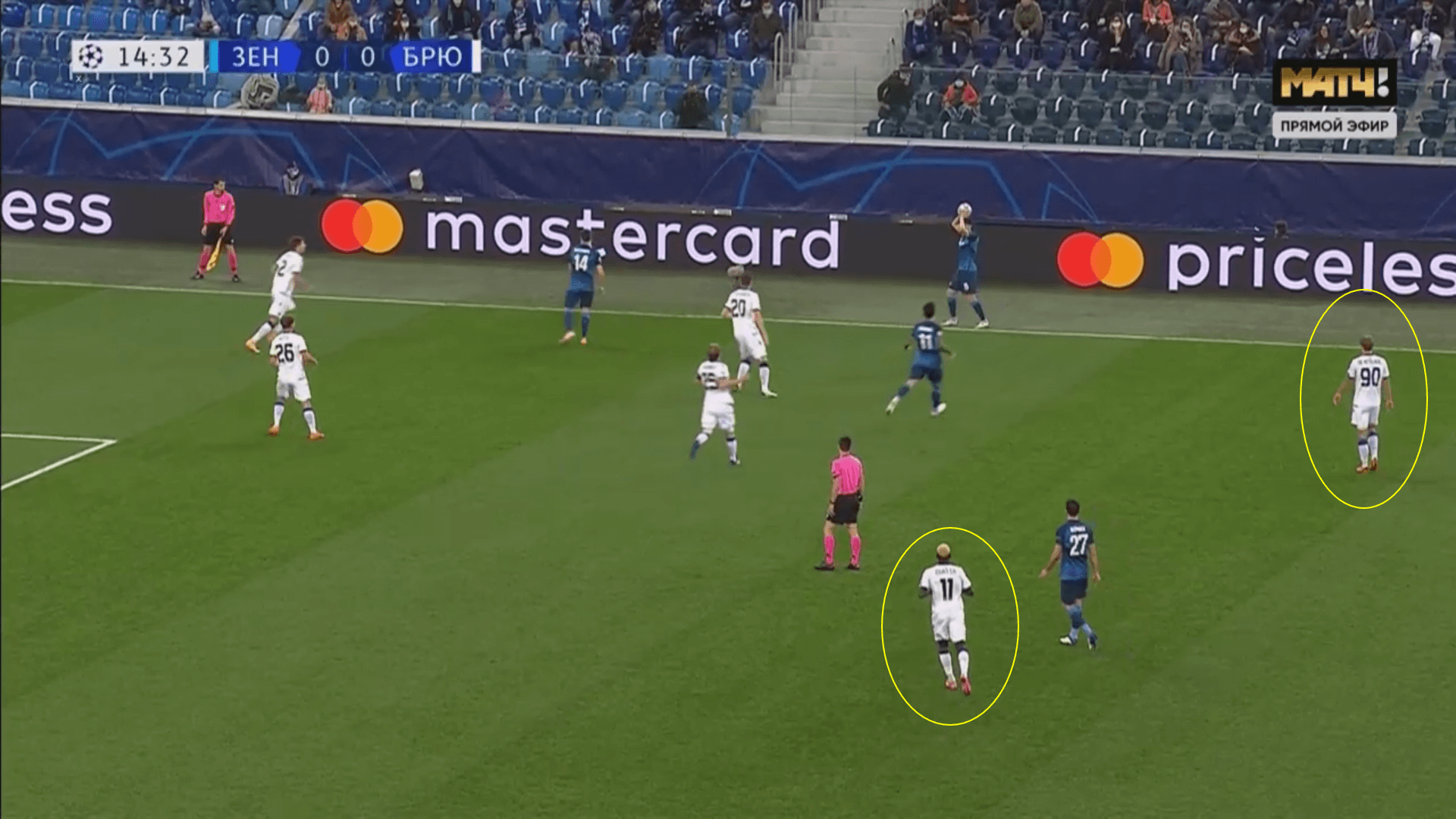 Brugge really squeezed the spaces for Zenit to operate in during the first half, and limited the attacking opportunities the home side could create. Furthermore, by dropping back, Brugge had more options when regaining the ball and playing themselves out of their own half, without having to go more direct.

Despite Zenit being the better side in the second half, it was Brugge who ultimately won the game. Youngster De Ketelare was the beneficiary of a wonderful move involving the key Brugge playmakers, Vanaken and Vormer.

One of Brugge’s favourite tactics when playing domestically is to create attacking triangles in wide areas, especially using Vormer or Vanaken. However, it is usually by using a full-back, wide man and then either of the two aforementioned players. This time, they are both involved in creating the triangle, along with wide man Noa Lang. Vormer has an ability to exploit open spaces on the field, and we see here that he has managed to get behind Barrios. 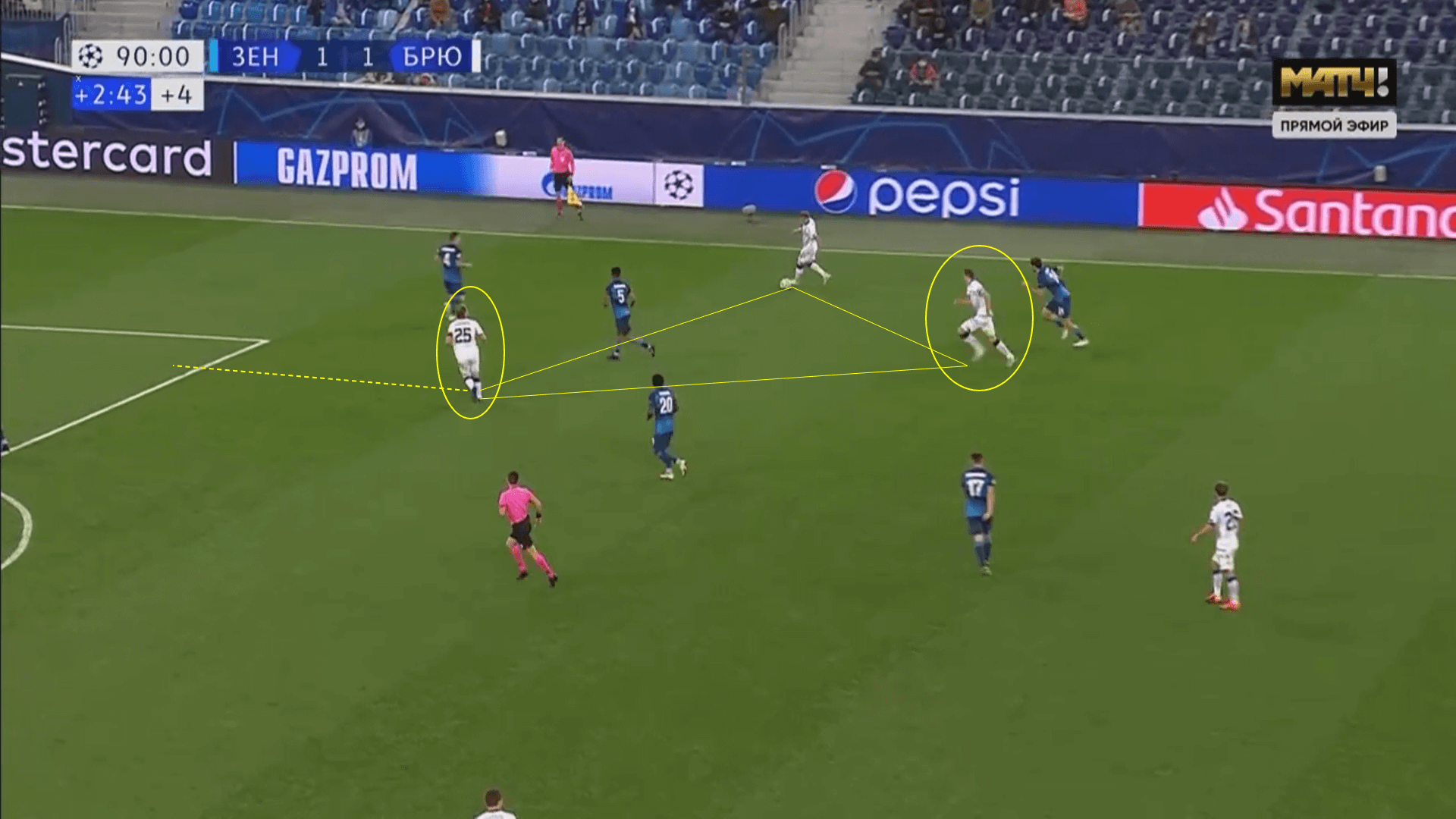 This movement drags Barrios away from the area he was in, as he knows he needs to follow Vormer. This then creates space for Vanaken to drift into. Barrios is the defensively minded player in the Zenit side, with no other player having recognised the danger. Now, he is caught between two minds: either follow Vormer, or try and bridge the gap to Vanaken. 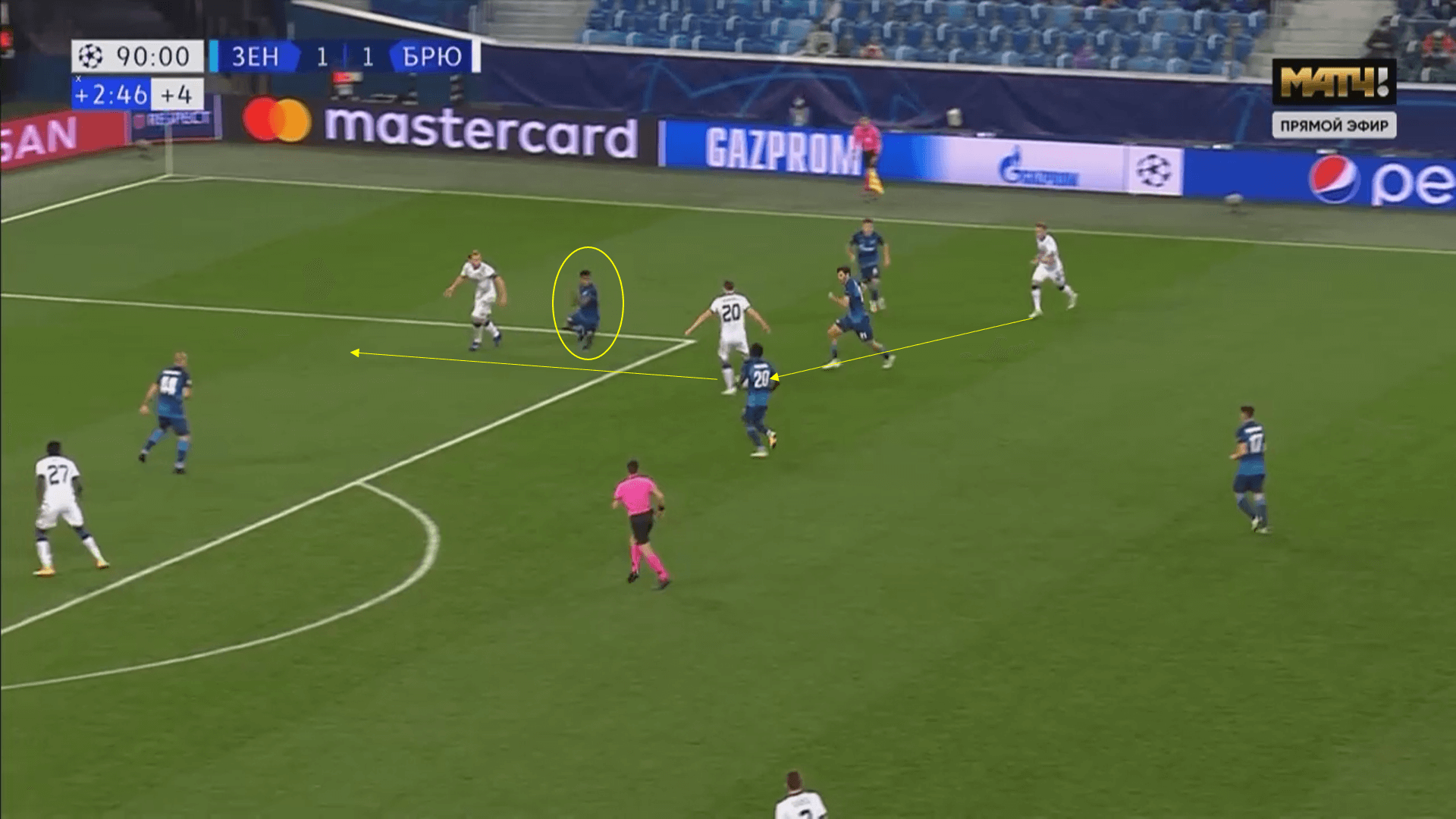 Barrios attempts to bridge the gap, yet Vanaken is able to make the pass before him. Vormer is a quality crosser of the ball, and makes no mistake in finding the young De Ketelare, who has drifted in off the right flank. 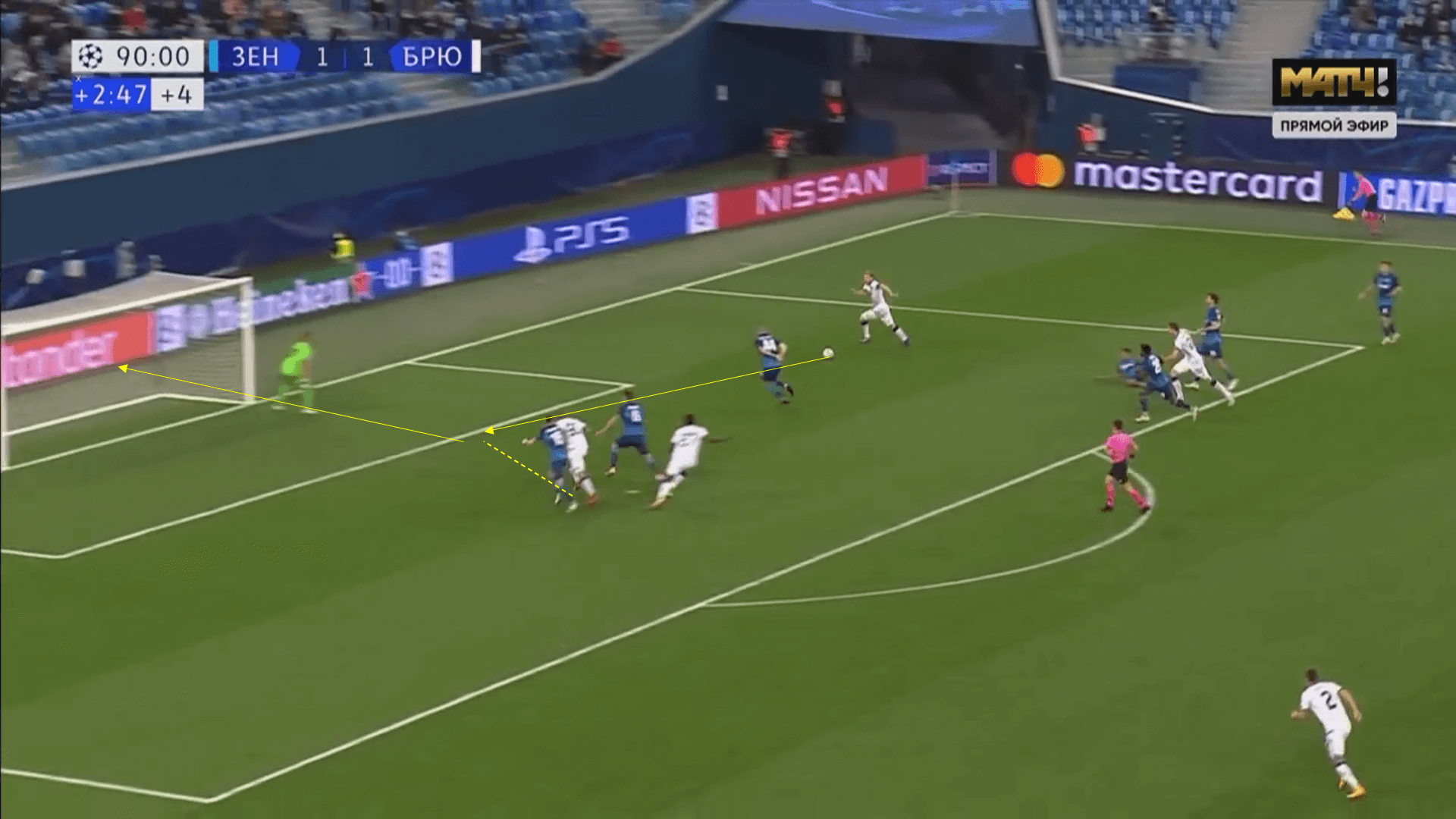 Brugge had struggled to use the triangles they like to create out wide to bring about attacking chances during the match. Yet, when they were able to get Vormer and Vanaken into these areas, they were as effective as they are domestically. This was the defining moment of quality in what was a toughly fought group stage tie.

Both Brugge and Zenit saw this as a big opportunity for them to get up and running in this year’s competition. In what was an even game, it was Brugge who came out on top, thanks to a moment of real quality. They were able to limit the Zenit attack in the first half, as well as deal with the adjustments the home side made in the second half to come away with the three points. This win means they have already equalled their points tally from last season’s competition.