Borussia-Park hosted an even contest between two Bundesliga team in the top four, Borussia Mönchengladbach and RB Leipzig. This tactical analysis will break down the game that finished 1-0 to the home side.

Gladbach, led by Marco Rose, have had a respectable start to the Bundesliga campaign, with only a single loss to Favre’s Borussia Dortmund so far this season, while also going toe-to-toe with some elite teams in the UEFA Champions League such as Inter Milan and Real Madrid. In this analysis, we will discover how Rose’s tactics resulted in a close victory for die Fohlen.

Leipzig, managed by Julian Nagelsmann, have had a tough week, losing 5-0 midweek to a stuttering Manchester United team, and now losing 1-0 to Gladbach in the Bundesliga, putting an end to their unbeaten domestic start. This analysis will take a deeper dive into how they lost this game but also what they did correctly here. 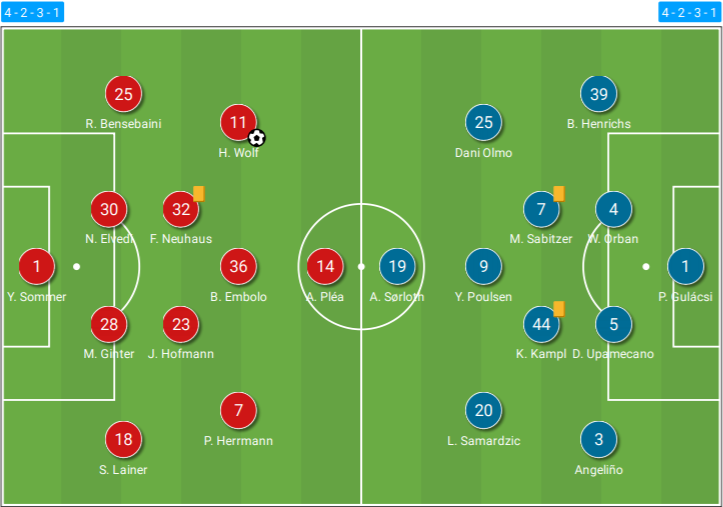 Rose has one main injury concern to contend with, which is Denis Zakaria at defensive midfield. This led to Hofmann, typically a winger, starting in a double pivot with Florian Neuhaus in the base of midfield, which ultimately turned out to be an astute tactical adjustment. Marcus Thuram has struggled at the start of the domestic campaign, and despite a star performance against Madrid during the week, Wolf was favoured over the Frenchman for this fixture as well.

In this game, Nagelsmann had a few injuries to deal with, including Konrad Laimer, Lukas Klostermann, Nordi Mukiele, and Marcel Halstenberg. Laimer has been missing since August, so the German coach has been handling his absence for some time now, however it was a surprise inclusion to play Sabitzer as part of a double pivot with Kampl. Similarly to Hofmann, Sabitzer is also typically a wide man, so his starting position as a central midfielder was different.

Sørloth as a focal point for Leipzig’s attackers

Against Gladbach, we saw Leipzig start out in the same formation as their opposition, but when they were in possession, their setup looked a little unorthodox. The double-pivot consisted of Kampl and Sabitzer, but the latter would regularly venture up the right half-space, while the former would stay back and act as a facilitator in build-up or play long vertical balls into either Sørloth or Poulsen, who essentially acted as a second-striker to the Norwegian in this game. While Gladbach would play a very narrow 4-2-3-1, Leipzig’s wide attackers would stay inside and allow the full-backs to stay wide up and down the flanks.

In the above analysis, we see Gladbach operate in a narrow 4-2-3-1 system. Angeliño and Henrichs stay out wide to take up positions of space down the flanks, while Poulsen joins Sørloth up top, to provide Kampl with a target to aim for and progress the ball forwards.

As mentioned, Poulsen would push up from the #10 role to play alongside Sørloth in the forward line. Both he and the Norwegian would interchange well, they would both do their bit in coming back to contribute to the build-up and also make the runs beyond the defensive line when the other had the ball. Poulsen, in particular, would drift out wide when Olmo or Samardžić would cut inside, to provide a passing option down the flanks. From here he was able to find Sørloth making runs down the half-space and link up with the Dane from there.

Poulsen makes the angled run out to the wings after Bensebaini is caught out of position higher up the field. Henrichs has space to hit the ball into, with Sørloth making run down the inside channel as well.

Poulsen sends the ball down the line to Sørloth, who then returns the favour inside the penalty area, where Poulsen cracks a shot on goal, which Sommer comfortably palms away.

Leipzig’s wide midfielders on both sides of the pitch would drift inside to create overloads in central areas. On occasion, Henrichs and Angeliño would carry the ball from the flanks into central zones, to draw attention from Gladbach’s defence, create space, and find their teammate with a through ball into the penalty area. This granted Leipzig opportunities on a few occasions where they drove through the core of the Gladbach defence and carved a chance of decent value.

In the above analysis, we see Nkunku holding up the ball well, waiting for Forsberg’s run into the box, which he meets. Forsberg takes the shot, which deflects just wide for a corner.

As stated earlier, Leipzig’s width in this match came through their full-backs, Henrichs and Angeliño. Up against Gladbach’s very narrow 4-2-3-1, they had freedom up and down the flanks to position themselves in useful positions in every phase of play. In midfield, where the majority of this game was played, both full-backs would hang wide on the halfway line and when they received the ball, they would look to play the progressive pass down the line to one of the forwards. 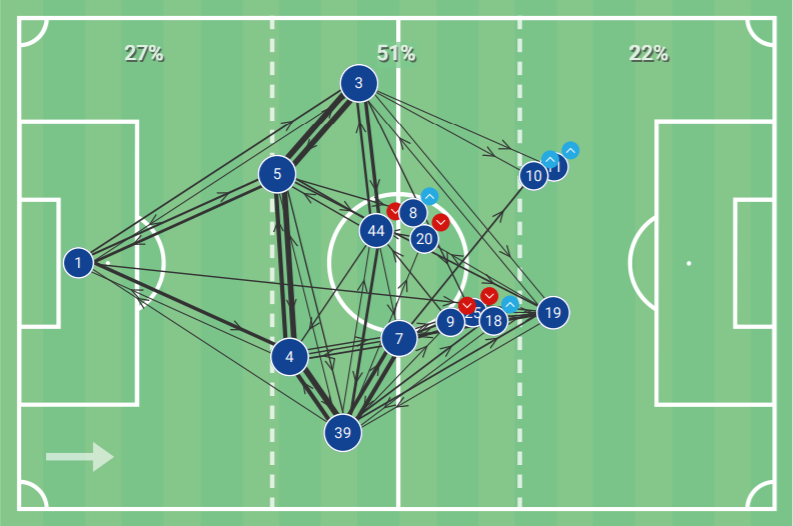 This was helped by Sabitzer who would often position himself in between the lines to provide Kampl with the progressive pass to play. Between the two of them, they won ten defensive duels, played ten progressive passes, and eight passes into the final third, making for balanced midfield pairing, ultimately a smart decision by Nagelsmann.

Sabitzer, as he is typically a right-winger, would carry the ball into wide zones and either send a delivery into the box for one of the strikers, send through balls to one of the other forwards, or lay off the full-backs in advanced areas of the pitch to produce a cross themselves. This was effective for the Austrian as he would drag the attention of the Gladbach defenders in central areas, which would create even more space for Leipzig’s full-backs out wide.

Out on the wing, Sabitzer takes the ball and sends a lofted delivery into the box. Sørloth physically towers over his opponent to head the ball, but just wide, unfortunately.

In this game, we saw Leipzig’s attackers, on occasion, become frustrated at Gladbach’s compact nature in defence. Just over a third of their attempted efforts came from outside the box, with Olmo and 18-year-old Samardžić counting many of those efforts as their own. In the case of Samardžić, he is a very raw attacking talent, who is excellent at picking up space in dangerous zones, but what he does on the ball still needs to be worked on, as now and then he will make the poor decision in the final third.

Samardžić picks up the ball on the counter and drives through the core of the Gladbach defence.

He continues carrying the ball towards the box, but he decides to shoot from distance whilst under pressure from Hofmann, despite Angeliño occupying a good position to receive the ball and produce a cross.

Gladbach’s numerical superiority in midfield and struggle to create chances

Marco Rose is a tactically flexible manager, as he has shown in his time at RB Salzburg, and now at Gladbach. Typically, Gladbach press in a 4-2-3-1, and this was seen here in this game, with Pléa positioned as the highest player in the press but occupying the left half-space rather than the central channel.

Against Leipzig, we saw Gladbach man-mark their opponents, with Pléa man-marking the right centre-back, while Embolo in the #10 space behind him marking either Kampl or Sabitzer. Whenever one of the Leipzig centre-backs goes to attempt the long vertical pass, this is the pressing trigger for one of Gladbach’s midfielders to press the man and win the ball back.

In the above analysis, we can see Upamencano begin to look for the long ball towards upfront. Hofmann sees this and immediately sprints towards Upamencano to recover the ball.

Hofmann carries the ball up the pitch with an on-chasing Upamencano in his trail, while Pléa enters the box, takes a couple of touches, and places his shot right into the palms of the keeper.

The main issue that came as a result of their narrow setup was that whenever Leipzig regained possession, they had players in space in wide areas who were able to exploit the space higher up the pitch and send the ball into the box, where they had aerially dominant centre-forwards.

In possession, Leipzig played much more of a 2-2-4-2, which enabled Gladbach’s numerical superiority in midfield, where the majority of this game was played. The issue was that Gladbach were not as effective in transition as their opposition, but they finished their best chance of the game, while Leipzig did not.

Here, we see Bensebaini come inside and exploit a narrow Leipzig by passing the ball out towards Pléa on the left-wing. From here he can aim at numerous Gladbach men in the box.

Pléa drills the ball into Herrmann’s feet, who takes up the ball well, and lays it off for Wolf to finish with aplomb into the bottom corner.

Rose’s men, in general, struggled to enter the opposition’s penalty area in this game, with just five shots in the entire game, although they all came from pretty good shooting positions. It felt as if Gladbach were missing Thuram in this match, who could’ve acted as a great focal point for the likes of Herrmann, Pléa, and Wolf to play off of, just like Poulsen and Sørloth did on the other side of the pitch. Thuram is also very capable with the ball at his feet, with his strong, direct dribbling ability, which could’ve been used to great effect against a high pressing line.

In conclusion, this was an even contest and neither team were out of the match at any point in the ninety minutes. xG valued the game at 0.63-1.28 in Leipzig’s favour, which makes sense given the volume of opportunities they had over their competitors.

Both managers will come out of this game with mixed thoughts. While Nagelsmann’s side kept Gladbach largely at bay, they struggled to get into high-value goalscoring opportunities regularly in this game, when there was plenty of occasions which they really should have. Rose will be disappointed his side did not create more chances out there, but his team got the goal necessary to win the three points, and he’ll be keen to take this momentum into his next fixtures.