Bundesliga title chasers Borussia Mönchengladbach hosted Union Berlin in a tactically intriguing match on Sunday. Led by their new manager Marco Rose, Gladbach are currently tied-third in the Bundesliga for most wins and sit in fourth place on the table, a mere four points out of second behind RB Leipzig, Borussia Dortmund, and Bayern Munich. Union Berlin have also had an overall admirable Bundesliga debut season, but a streak of four losses in their last five league matches has seen them slip from 10th down to 14th. This tactical analysis will discuss how Gladbach were able to defeat their opponent through bypassing Union Berlin’s high lines and take advantage of space. 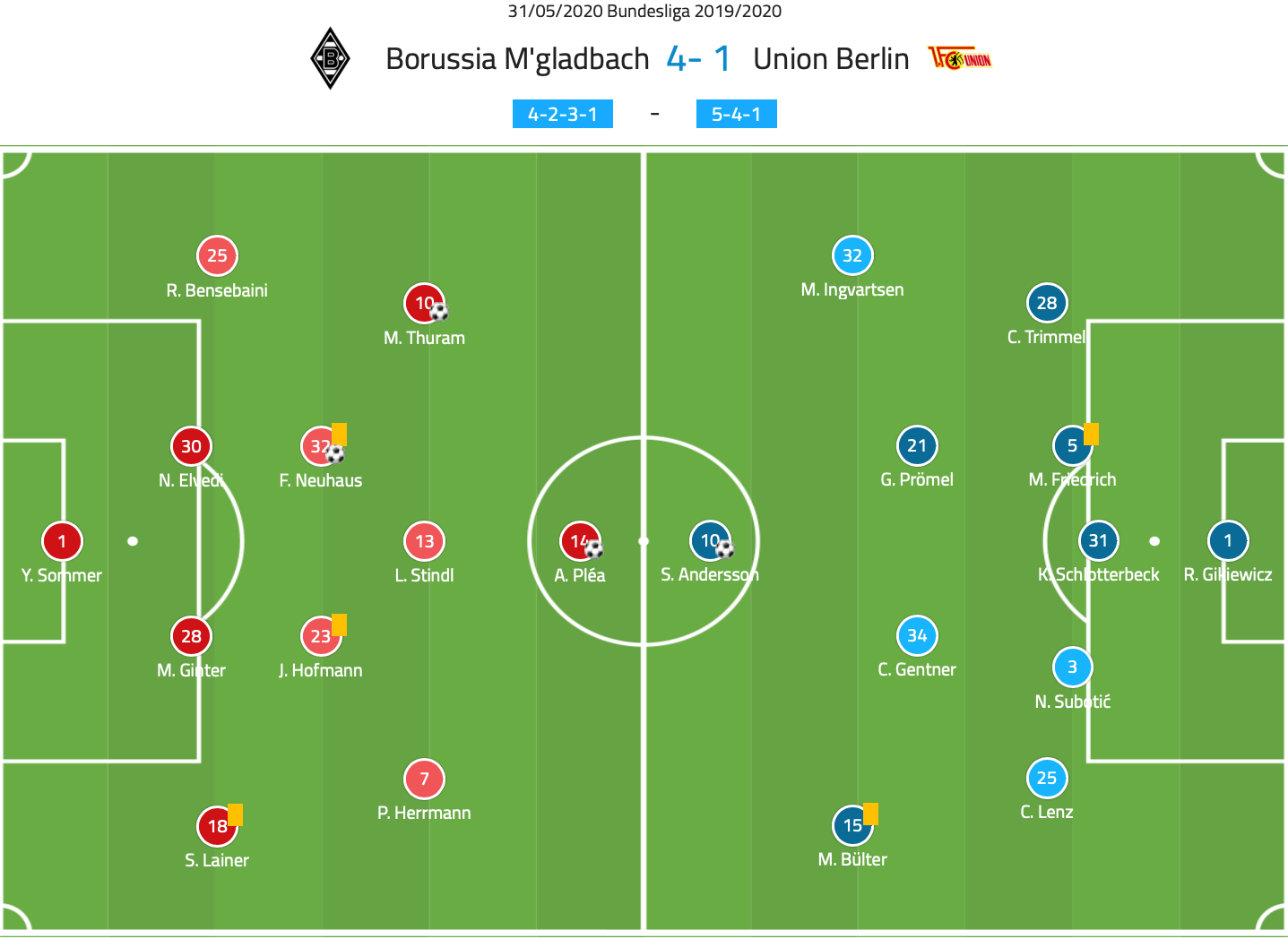 Rose continued the use of the general 4-2-3-1 formation. Stefan Lainer, Matthias Ginter, Nico Elvedi, and Ramy Bensebaini started in the backline. Jonas Hofmann and Florian Neuhaus started as the two deeper midfielders behind an attacking quartet of Patrick Herrmann, Lars Stindl, Marcus Thuram, and Alassane Pléa.

Gladbach used various pressing tactics to regain possession, and therefore controlled possession for a majority of the first 60 minutes of the match. Below is a sound example of Gladbach’s front press. As Union rotated the ball around the backline, the front press followed. Pléa continued his pressing run and placed himself between the ball and the central centre-back. Herrmann and Stindl pressed the left centre-back and the right central midfielder respectively, also near their traditional positions. Hofmann moved forward to press the other central midfielder, cutting off a passing outlet towards the centre of the pitch. The only option for Subotić then was to complete a pass to the left-back in the wide area, which the right-back Lainer pressed. 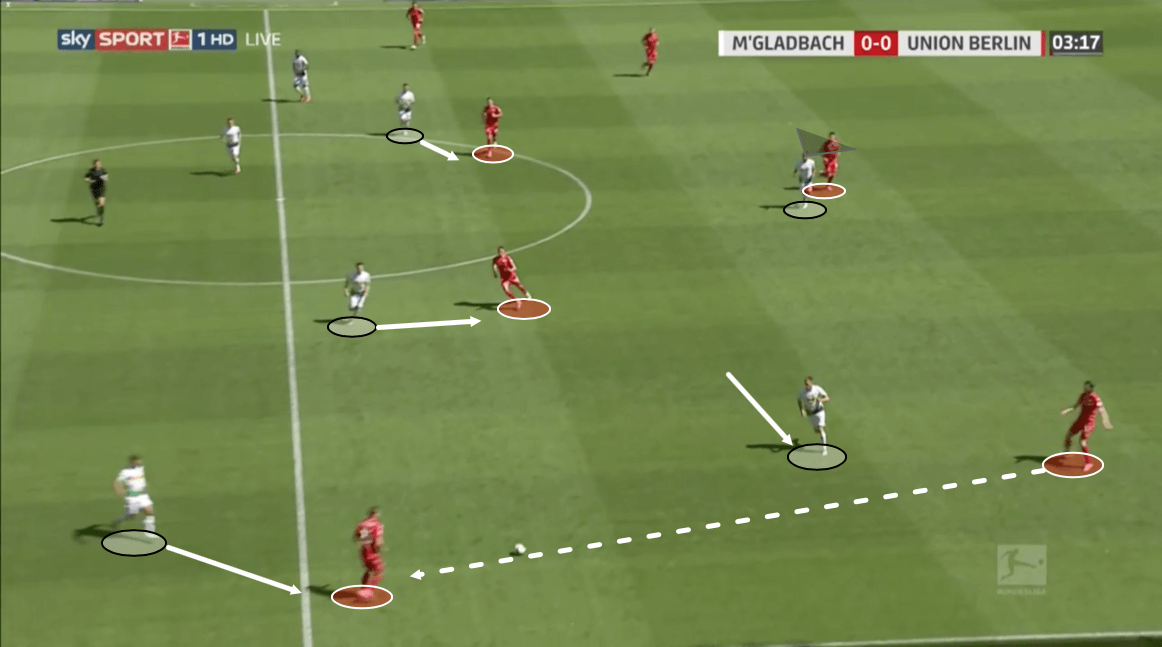 More specifically, Gladbach would quickly initiate a counter-press whenever Union recovered the ball. Union’s high positioning meant they had passing options in aggressive areas going forward, and Gladbach had to prevent them from taking advantage. A counter-press is an excellent method of making sure the opponent never progresses the ball too far. Below, after an errant backwards pass turns possession over to Union, Hofmann immediately pushed forward and pressed the ball. With the two nearest passing outlets covered by the other deep midfielder Neuhaus and the striker Pléa who had shifted wide, Hofmann was able to successfully regain possession of the ball. This led to Gladbach’s third goal of the match just a few seconds later. 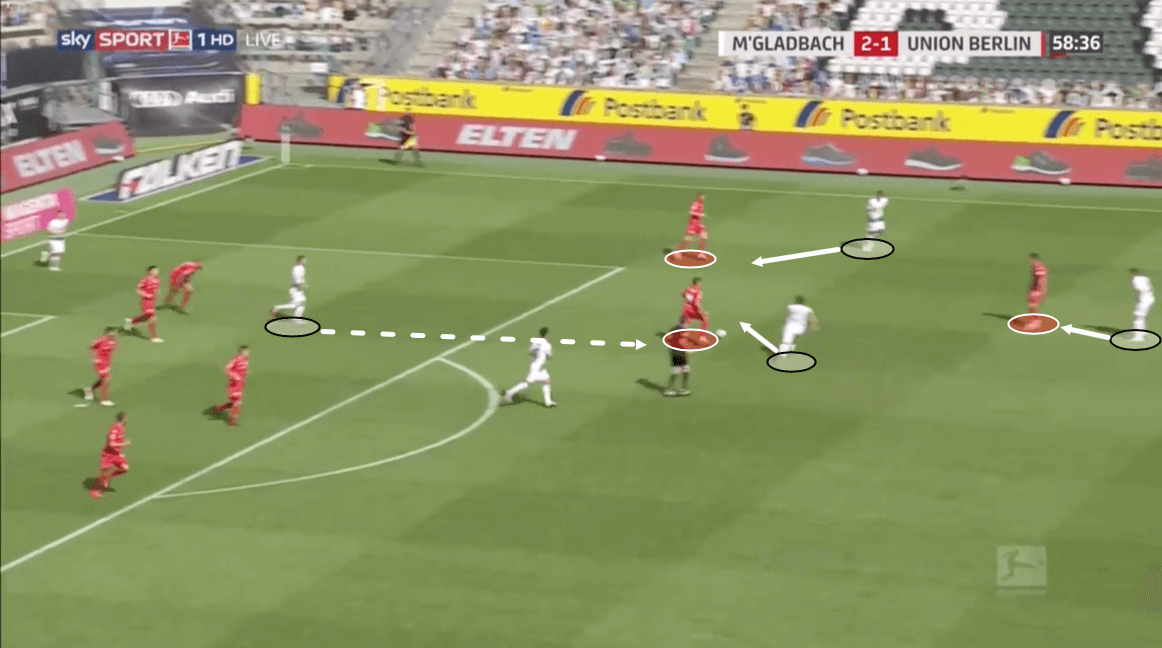 Gladbach were also selfless after the counter-press as they continue to move into advanced areas. Below, using direct pressure and cover shadows, Gladbach regained possession in Union’s final third. Lainer completed a quick pass forward to Herrmann, who passed centrally to Neuhaus. Thuram, currently occupying the far-side wing-back, moved down into the box, which allowed Neuhaus space to carry the ball into and score the opening goal. 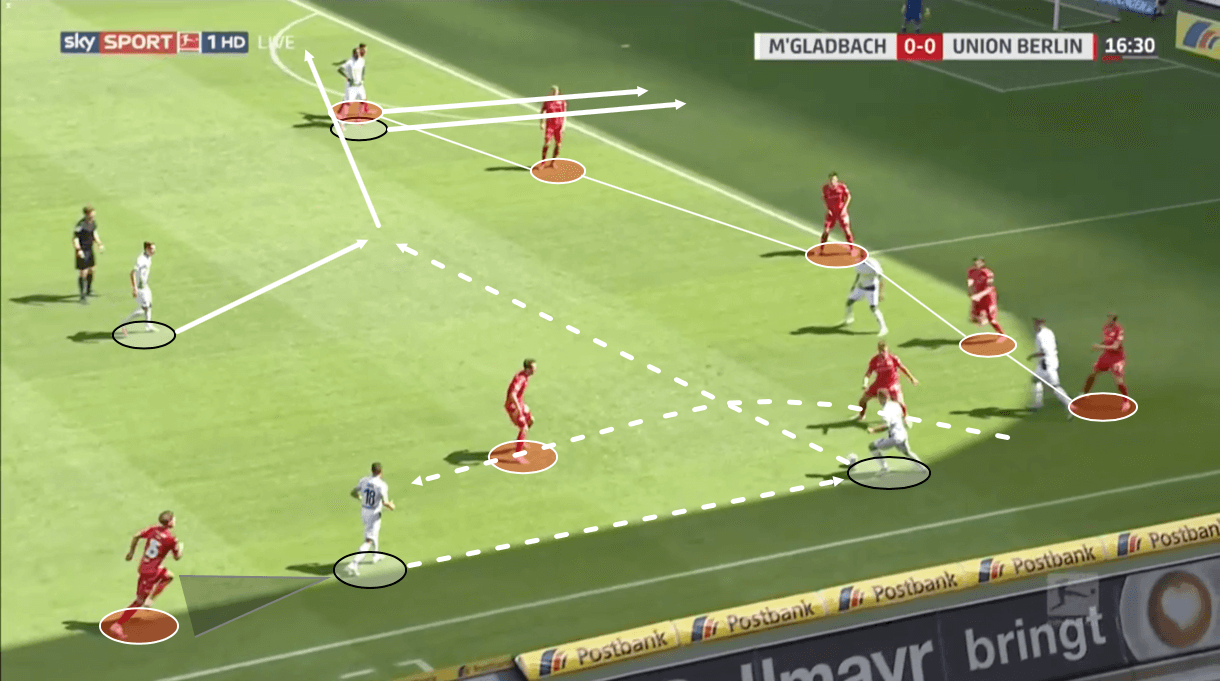 Despite Gladbach controlling possession for most of the match, Fischer’s side kept high lines of positioning for a team on the defensive. The graph below shows the average formation lines of both sides. Union’s lines were not only significantly higher than Gladbach’s but they also naturally increased as Gladbach’s lead grew. 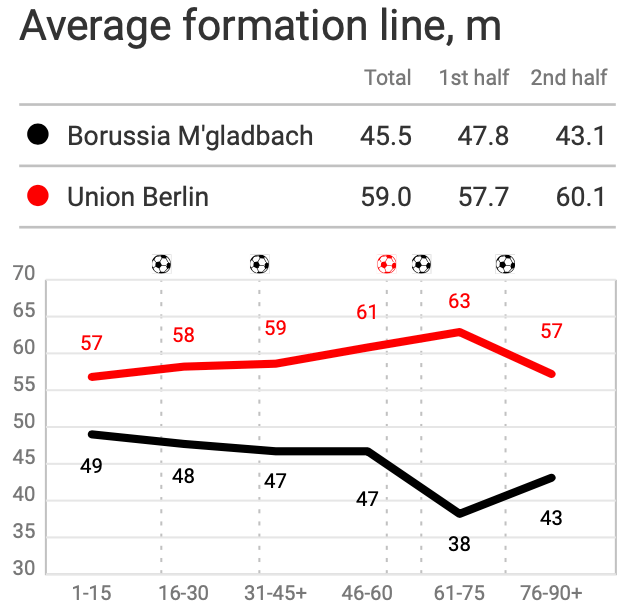 This tactic did actually work in various moments for Union. Below, Union’s well organised front press forced Gladbach to pass back to the keeper. 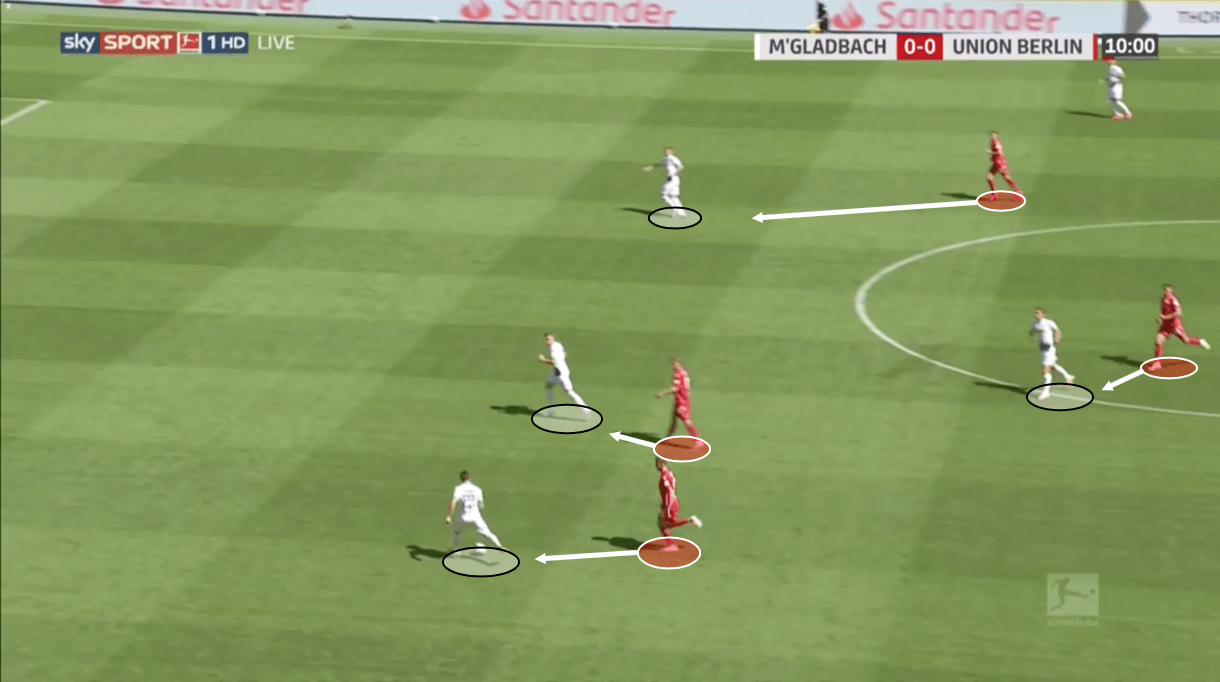 Another example can be seen here. After forcing Gladbach’s possession into the wide area, the left wing-back Lenz and left centre-back Subotić aggressively press the ball. Even despite the successful pass to the outlet, Union has enough players putting pressure high to trap the possessor and force a turnover. 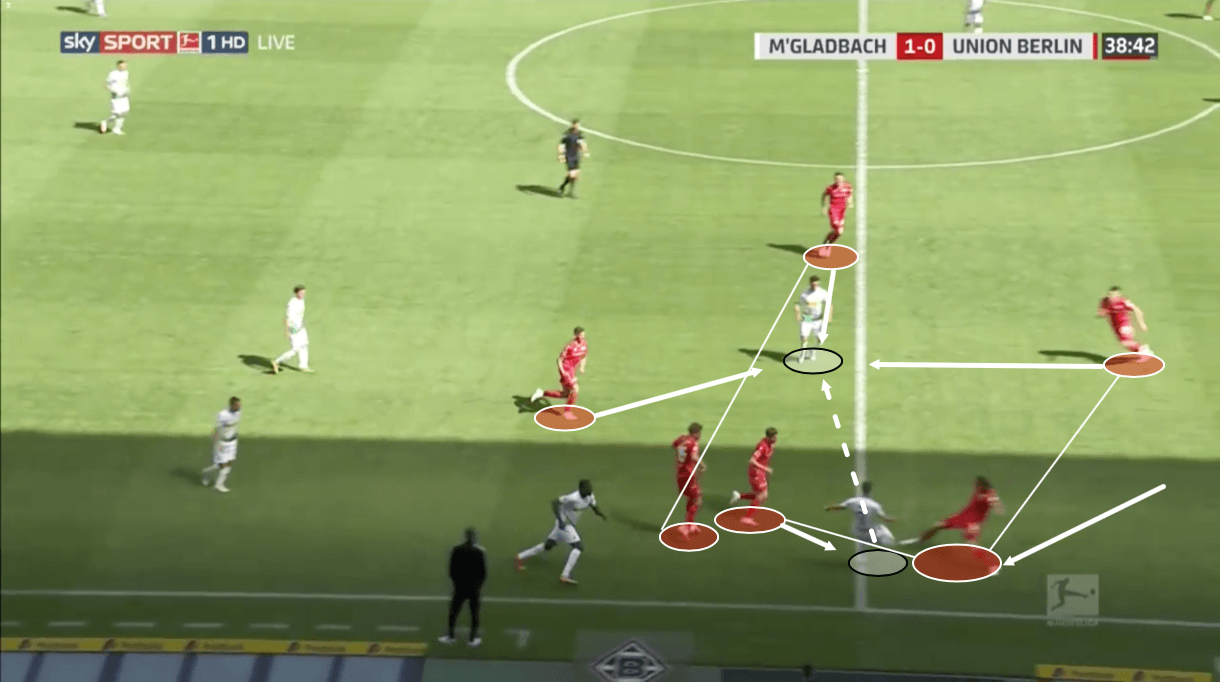 However, the potential reward of playing higher up the pitch comes with a risk. Exposing the space behind the back lines can perilous, as was the case in this match.

When shifting from a back five to a back four, especially while using high lines, there is a relatively simple tradeoff; while you gain an extra attacker, you also lose that extra defender. Unfortunately for Union, they struggled to cover space in their own half for these reasons. Below, against Union’s back five, Gladbach quickly advanced the ball using diagonal passes between the lines. After Stindl found space to turn in the midfield upon receiving the ball, he hit an accurate pass towards Pléa down the left touchline. 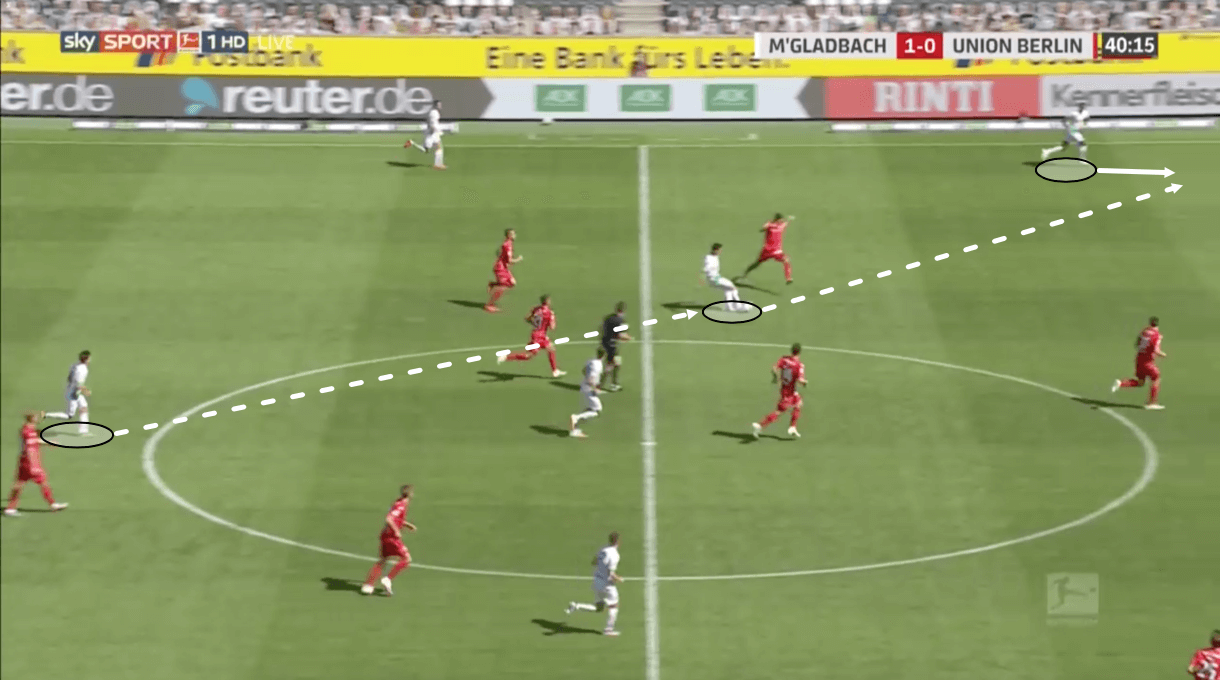 With Union’s back five scrambling to track back defensively, Pléa found little resistance progressing forward. Lenz was specifically late in tracking back into his defensive space. Thuram located this gap behind the backline, and Pléa crossed the ball towards the fellow Frenchman for a headed goal.

Gladbach also utilised this tactic to create their fourth and final goal of the match after Union had switched to a back four. First, Union’s high lines were again exposed. Below, Pléa drops back and receives a long ball while positioned between the midfield line and the backline of Union Berlin. He completes a one-touch pass to Stindl, who is also in said space. 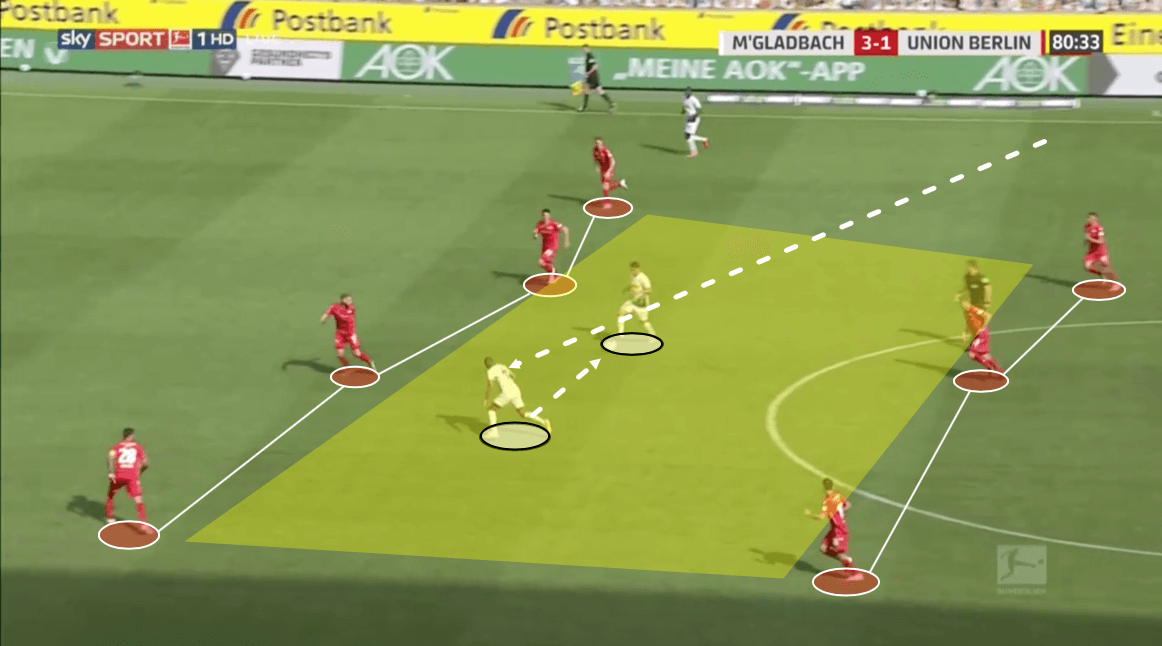 The opposing left centre-back Schlotterbeck puts pressure on the German midfielder. At the same time, Pléa returns to the striker position in front of the attacking midfield line and into the opposing backline, filling the space Schlotterbeck vacated. Stindl completes a pass towards Bensebaini in the wide left areas of the final third, and the Algerian hits an accurate cross into the box to Pléa, who scores after assisting two goals earlier in the match. 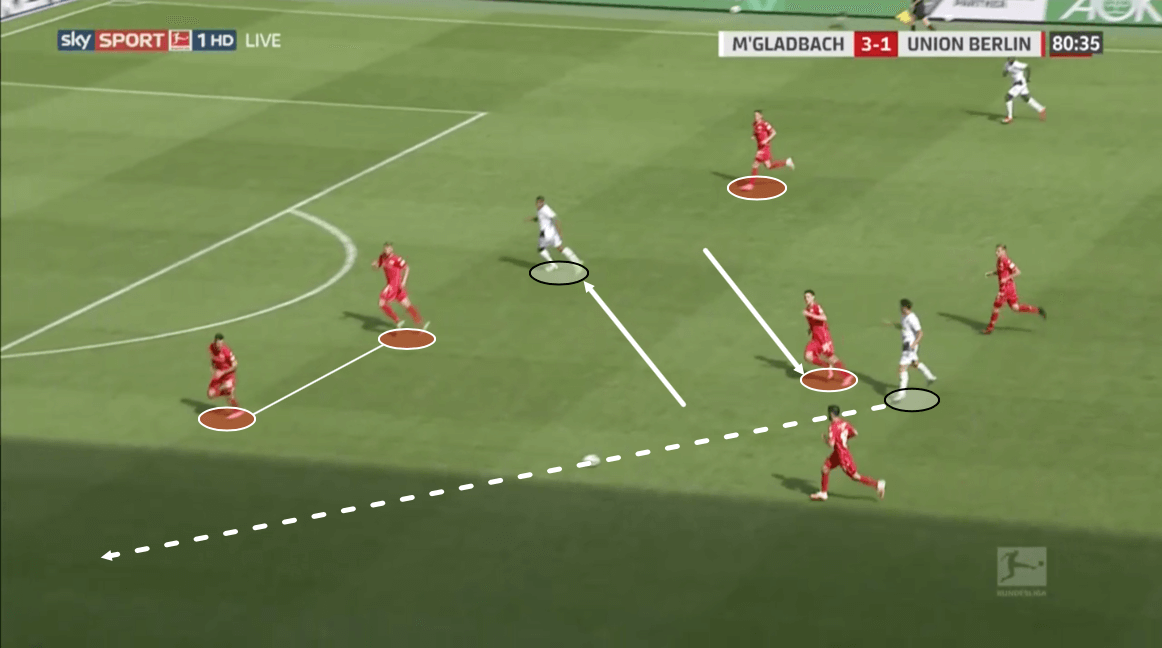 Ultimately, Rose’s team were able to overcome Union Berlin’s initially stout defence. Upon analysis, the high positioning of the visitors’ lines and the utilisation of the counter-press paved the way for Gladbach to exploit space in the opposing half. Fischer and co. will still have the opportunity to keep away from the relegation spots as they face two of the four teams below them on the table going into the final five matches of the Bundesliga season. Meanwhile, Gladbach must continue their rise in form in order to maintain their place in the hotly-contested top four, let alone progress up the table.