After a terrific 4-1 win over high-flying, Champions League chasing, Bayer Leverkusen it looked as if Wolfsburg were going to push on and cement sixth place in the Bundesliga table as their own. But yet again, we saw another Bundesliga team lose at home; possibly a worrying sign for all of the lower end Premier League teams so greatly concerned about losing their home atmosphere advantage in the run in to the conclusion of that league.

It was an interesting game, with Wolfsburg wasting too many chances in the first half, whilst Eintracht Frankfurt held on and went into the break 1-0 up, courtesy of an André Silva penalty.

Wolfsburg got an equalizer in the second half, and although Frankfurt were much better in the second period, it still looked like Wolfsburg could snatch it. However, Daichi Kamada hit a late winner for the visitors, getting them a vital three points, and clawing themselves away from possibly getting involved in the relegation battle, following a rather ropey restart to the season for them.

Aside from this Lucas Torró received two yellows late on in such quick succession that it might have even made Alassane Pléa blush.

This tactical analysis gives an analysis of the tactics used by both sides in this Bundesliga clash.

Wolfsburg fielded a 4-2-3-1 with Wout Weghorst as the lone striker, backed up by an attacking trio of Renato Steffen, João Victor, and Josip Brekalo. Marin Pongračić partnered John Brooks at centre-back, flanked with either side by Kevin Mbabu and Jérôme Roussillon, whilst Xaver Schlager partnered Maximilian Arnold in central midfield.

Eintracht Frankfurt shifted between a back three and a back four throughout the game but generally set up in an asymmetric 3-4-1-2, where Timothy Chandler played as the very reserved foil, to his “wing-back” teammate on the other side, Filip Kostić. 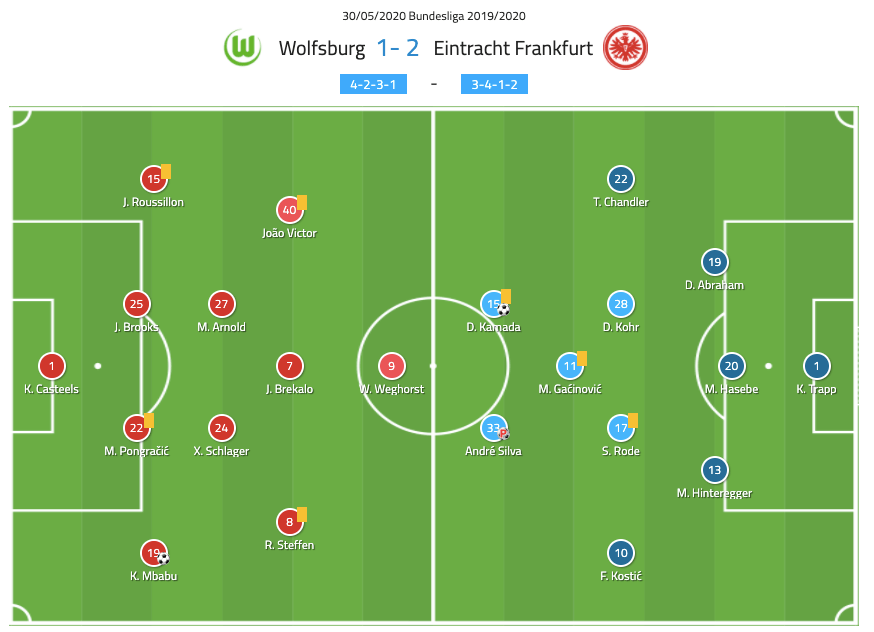 Both teams looked to stretch the opposition throughout the game, and it was particularly telling in the final third which I will detail in a later section.

Wolfsburg had some set patterns throughout their build-up to break the first line of Frankfurt’s press, give instant width, and leave central space. Both teams pressed high with Frankfurt having a 4.45 PPDA, and Wolfsburg having a 6.61 PPDA, however, admittedly both teams had a relatively low amount of passes per minute, and slower ball progression does lead itself to a seemingly more “intense” PPDA.

Schlager would often drop into the back line, as Thiago does for Bayern Munich, either side of the centre-backs or directly between them. 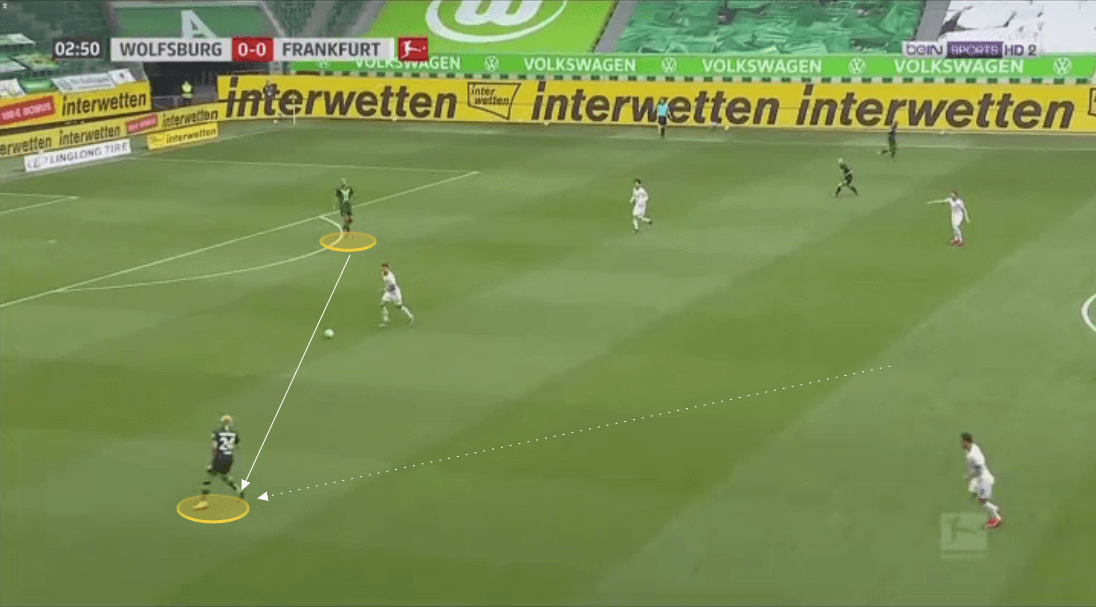 By doing this it meant Wolfsburg had a solid back three to deal with a loss of possession and subsequent defensive transition, whilst allowing Mbabu and Roussillon the freedom to push on, give Wolfsburg width in attack and allow both Steffen and João Victor to play closer to Weghorst in central areas.

The space left centrally meant one of the new back three had the option to play in this area despite Frankfurt having a very compact defensive structure. Weghorst would drop into these areas, and due to Steffen and João Victor playing narrower, they could occupy the opposition defenders, allowing Weghorst to move deep without being closely marked. 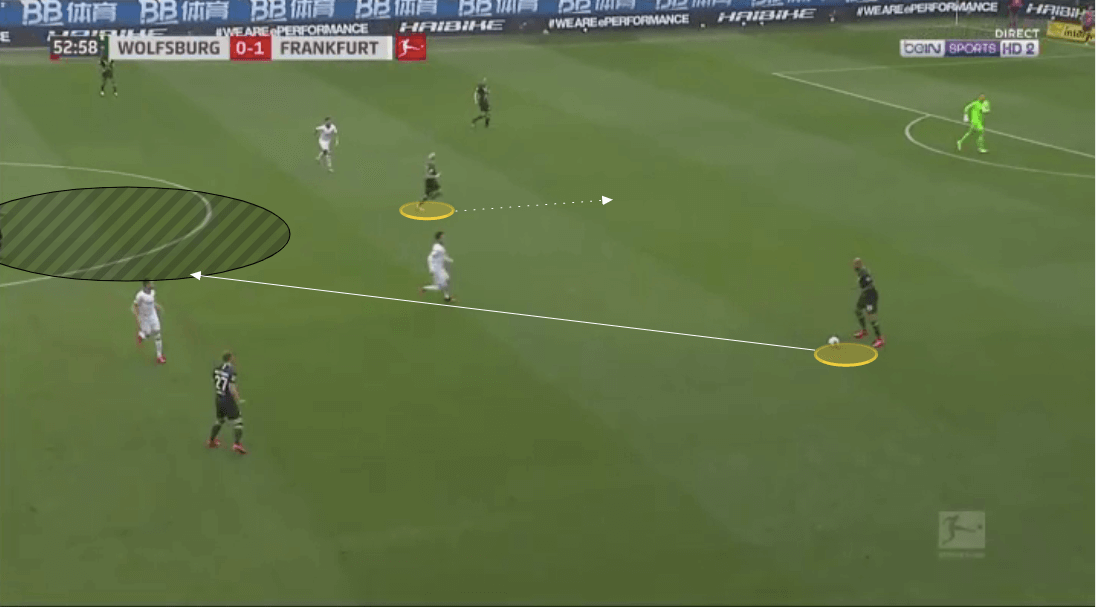 From Wolfsburg’s pass map below we can see how important Roussillon, in particular, was to the home side, and along with Mbabu, he was used as an outlet throughout the game in the build-up. 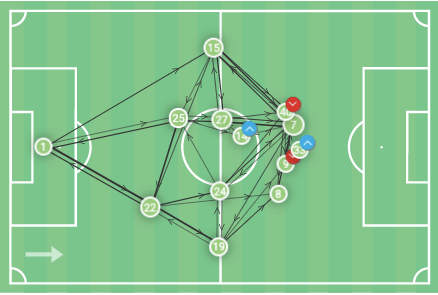 Wolfsburg were relatively happy to oblige with Frankfurt’s narrow shape and would commit players to one side of the pitch, heavily congesting this area, before looking for the quick outlet to the flank where one of their full-backs had pushed up and could now help them structure a quick break.

Weghorst’s positioning should be noted here, and despite a less than ideal day in front of goal, his work rate and desire couldn’t be faulted. 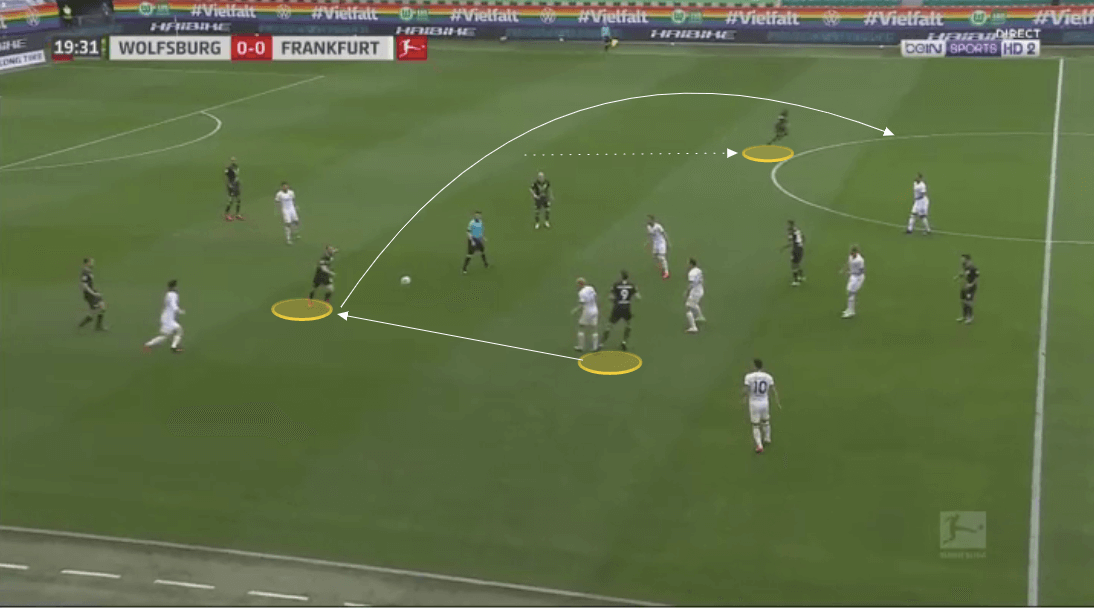 As Roussillon now has the ball inside the opposition half, Wolfsburg have plenty of players forward, including Weghorst who arrives free at the back post, despite being involved in the build-up leading to this break, well inside his own half. 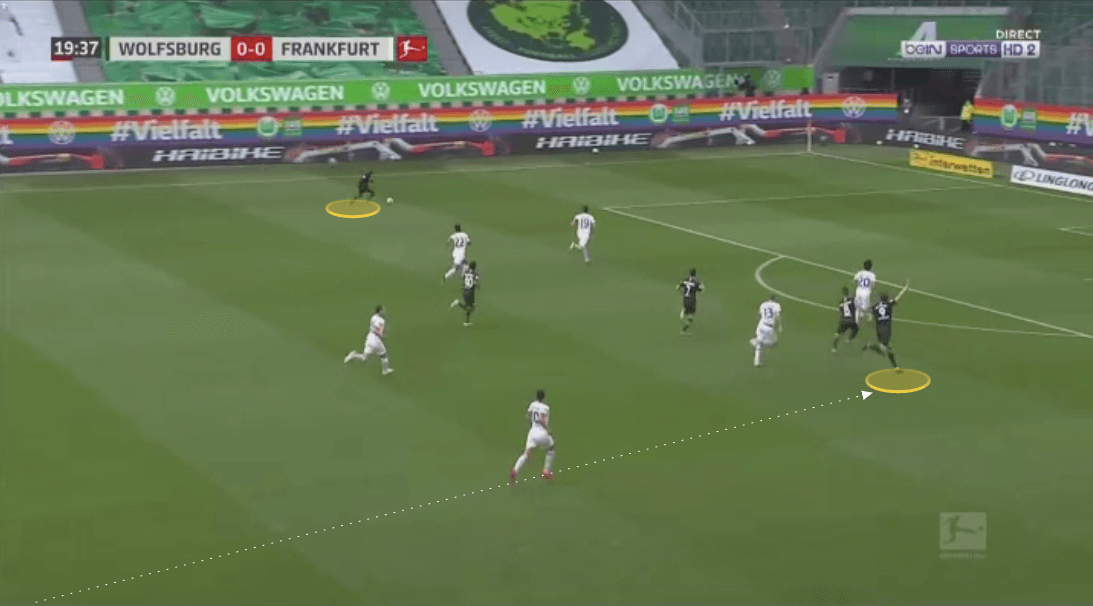 But as I’ve mentioned it was not to be Weghorst’s day in front of goal, nor really any of Wolfsburg’s side. Their 2.9 xG highlights their poor finishing on the day, as does the sheer volume of shots they took in good positions inside the Frankfurt 18-yard-box. 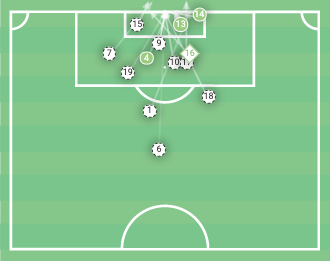 They had four chances with an xG higher than 0.3 and didn’t score any of these. Admittedly three of them came for Weghorst within the same goalmouth scramble, and although Kevin Trapp did admirably to keep him out, Weghorst should have scored one of those chances.

Frankfurt were far more clinical, and although they managed five of their nine shots in the first half, it was a quiet opening period for them, with four of their five shots coming in the final five minutes before half-time. In truth, they should have gone into the break two goals to the good, with Gaćinović wasting a beautiful cut-back from Kostić in the 40th minute. Despite 11 less shots than their rivals, they hit the target only one less time.

Unsurprisingly for the visitors, who have been so prolific from wide areas throughout the season, crosses led to both of their goals. For the first, André Silva got the wrong side of Pongracic and was brought down, as we can see below, before converting the penalty. 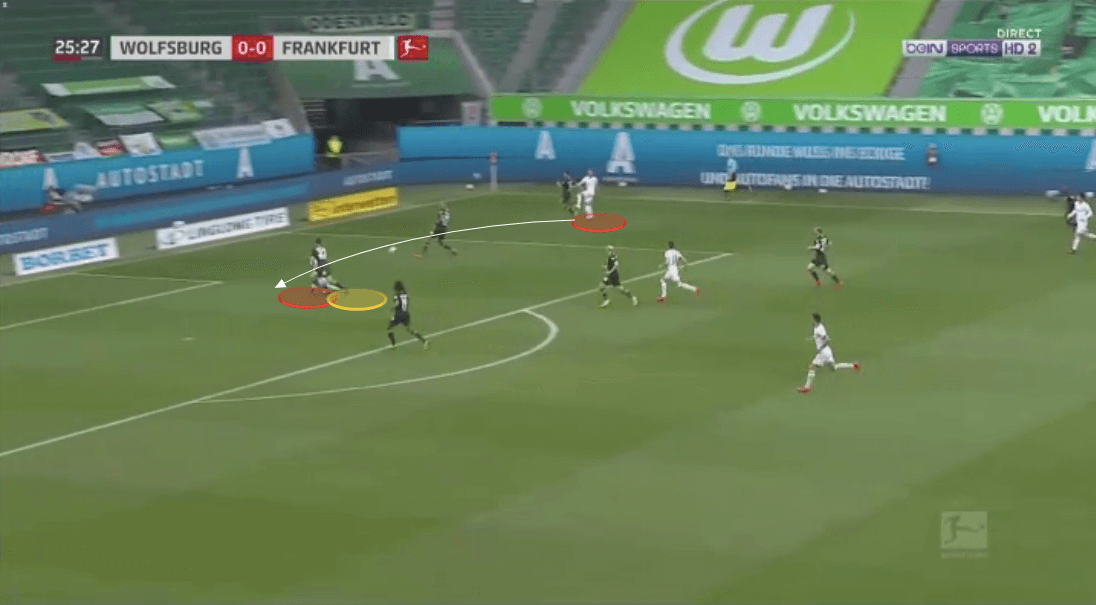 For the second, it came from stretching a tired Wolfsburg defence late on, and ironically it was a tactic Wolfsburg had done so well throughout the game, yet were undone by in the latter moments.

Both teams looked to stretch the pitch horizontally as much as possible throughout the game. I’ve mentioned Frankfurt’s narrow shape, and Wolfsburg had to work hard to break this down.

With Kostić as an excellent attacking outlet, Frankfurt looked to switch the play with long-balls to the winger, or play directly into André Silva, either to feet or over the top. 22.19% of their passes were long passes.

Due to Wolfsburg pressing with a 4-3-3 for much of the game, which turned into a 3-4-3 if the ball passed the first line, they were easier to break down. We can see below how Mbabu pushes up to join the midfield from right-back but Wolfsburg’s midfield is still carved open with a pass directly from Martin Hinteregger into his forward line. Schlager and Arnold aimed to stay as close as possible, but with little support, either side of them, were often caught flat and Frankfurt could bypass these two if given the opportunity. 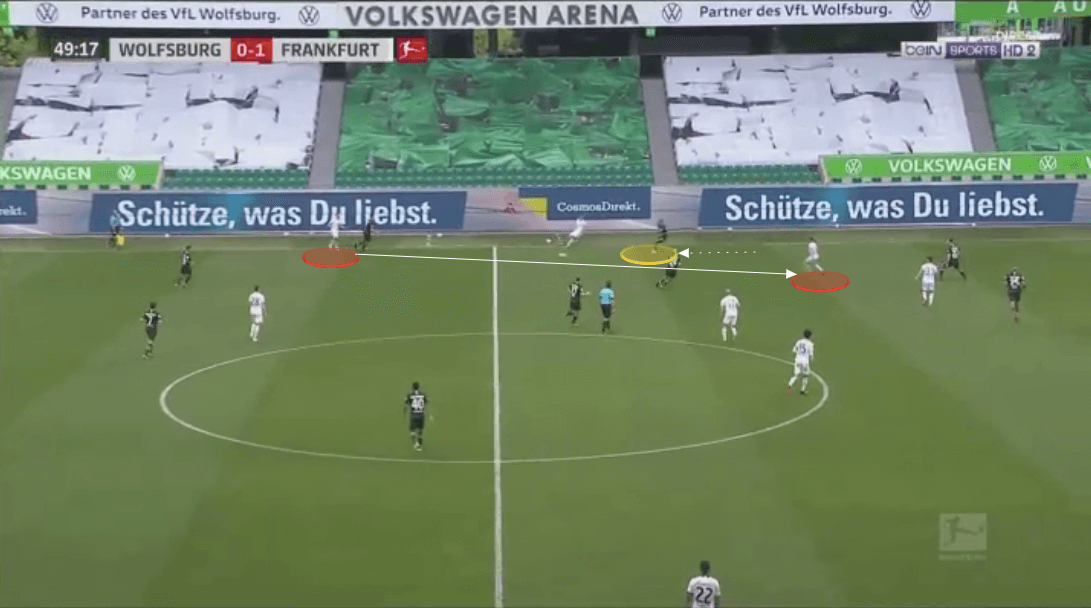 Yet Wolfsburg’s backline did a better job staying compact and although Frankfurt began to get more joy as the game wore on, certainly in the first 40 minutes of the game, the visitors barely had any success breaking them down. In fact, it was really the cross which led to the penalty which was the first time Frankfurt looked like a threat at all.

For Frankfurt, their obvious attacking threat from the flanks was Kostić rather than Chandler, whereas Wolfsburg’s double threat from either side meant they could quickly switch the play and instantly start an attack from the opposite side with a dangerous full-back-cum-wing-back on either side.

I’ve spoken about Roussillon’s impact on the switch of play and Mbabu certainly was too, however, the right-back had a greater impact in the more developed build-up. His pace, quick feet, passing ability and all-around outstanding football IQ makes him a well-rounded talent, and as we can see from the graph below Wolfsburg predominantly sought to build-up down Mbabu’s flank. 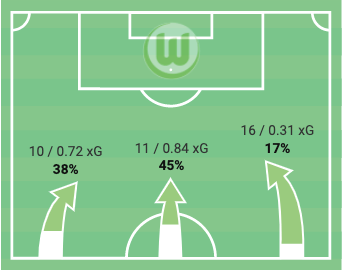 With Kostić being more of an attacking option than Chandler it would often lead to Frankfurt defending with a back four rather than the five we’re used to seeing from teams operating with a three at the back in their formation.

Wolfsburg looked to overload in wider areas and we can see how Mbabu plays the pass inside whilst Steffen stays outside ensuring Hinteregger is dragged over. There are big spaces between Frankfurt’s backline here and Wolfsburg could have exploited this more. 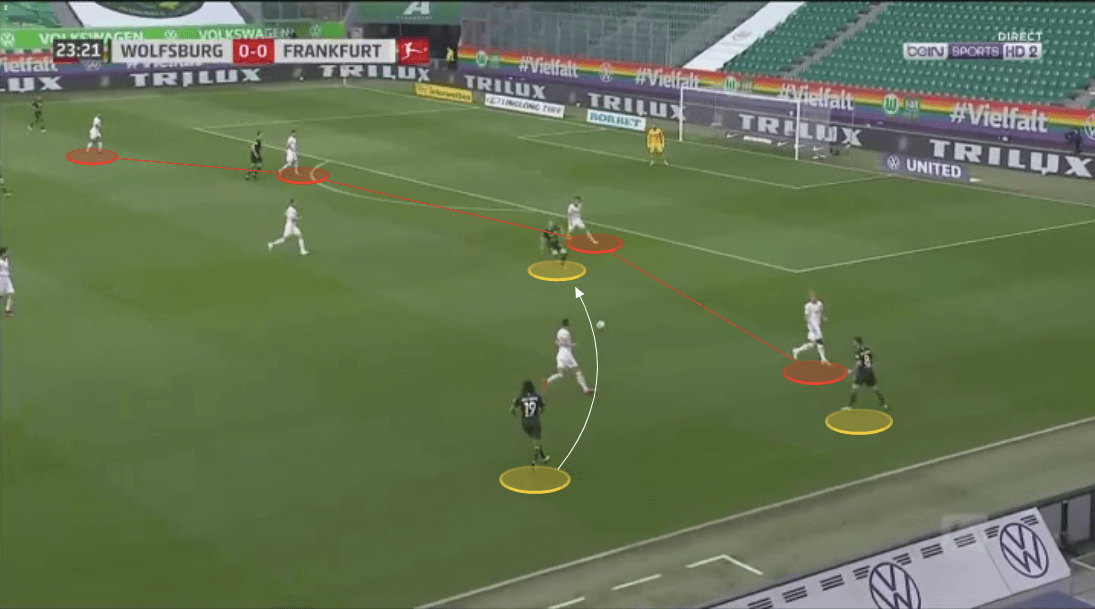 Frankfurt’s midfield did well to quickly close this gap should the home side not play forward quick enough and we can see how their close positioning means Frankfurt’s back line could afford to get stretched in this instance. Brekalo looked to make a run into the vast space between two of Frankfurt’s centre-back Makoto Hasebe and David Abraham, but the positioning of their central-midfielders means they can drop into this space and act as make-shift centre-backs themselves. 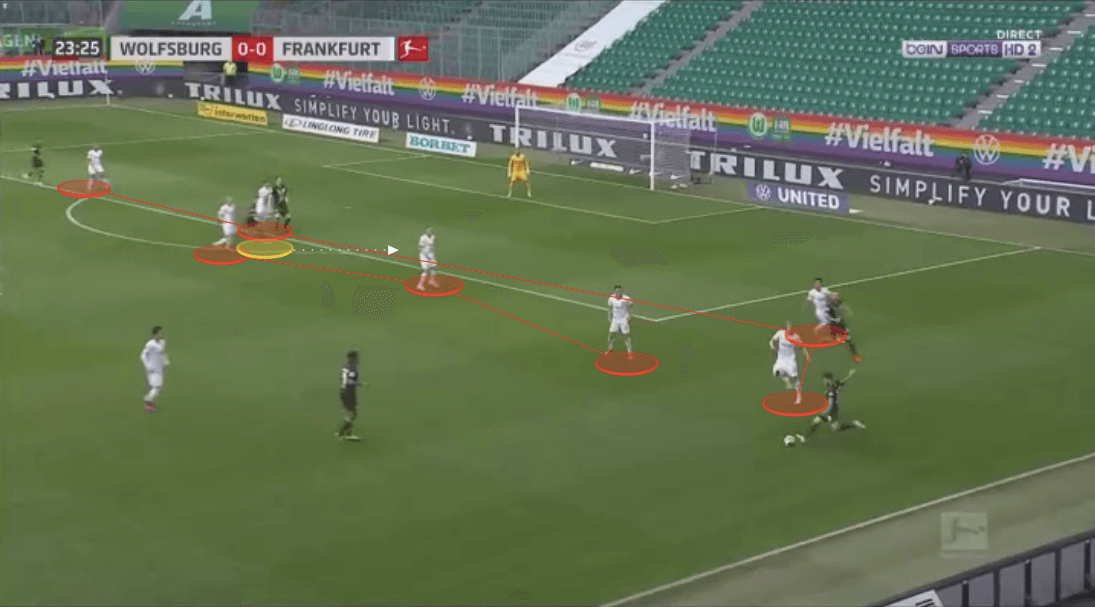 Below I’ve shown an example further highlighting how frequently their defence was stretched and yet Wolfsburg were unable to play potent attacking through passes, whether that was for a lack of quality on the ball or lack of runs into these areas by their forward line, but it was a wasted opportunity. 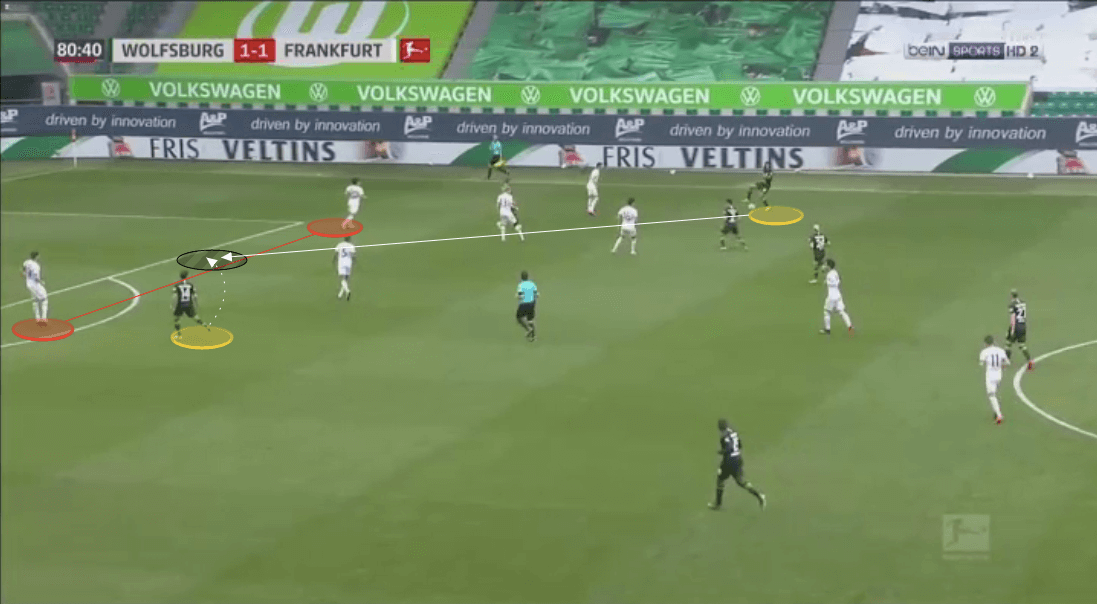 And yet Frankfurt were able to successfully stretch Wolfsburg at the end of the game to take all three points. As the cross came in for Bas Dost it looked as if there was enough space inside for a simple knock down to be put away by Djibril Sow, as Sow arrived in the space between Wolfsburg’s two centre-backs. 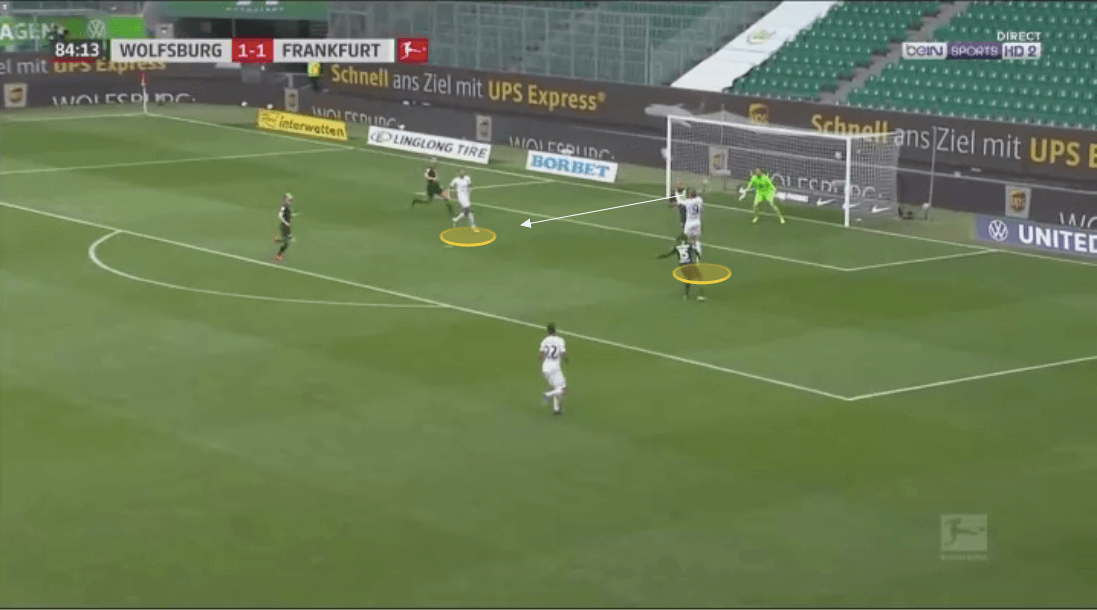 Yet the header went past Sow, and Kamada was able to arrive into the vacant space left open with Mbabu having attempted to block the initial cross and unlike Frankfurt, Wolfsburg’s midfield wasn’t close enough to their defence to drop in and fill the vacant spaces. 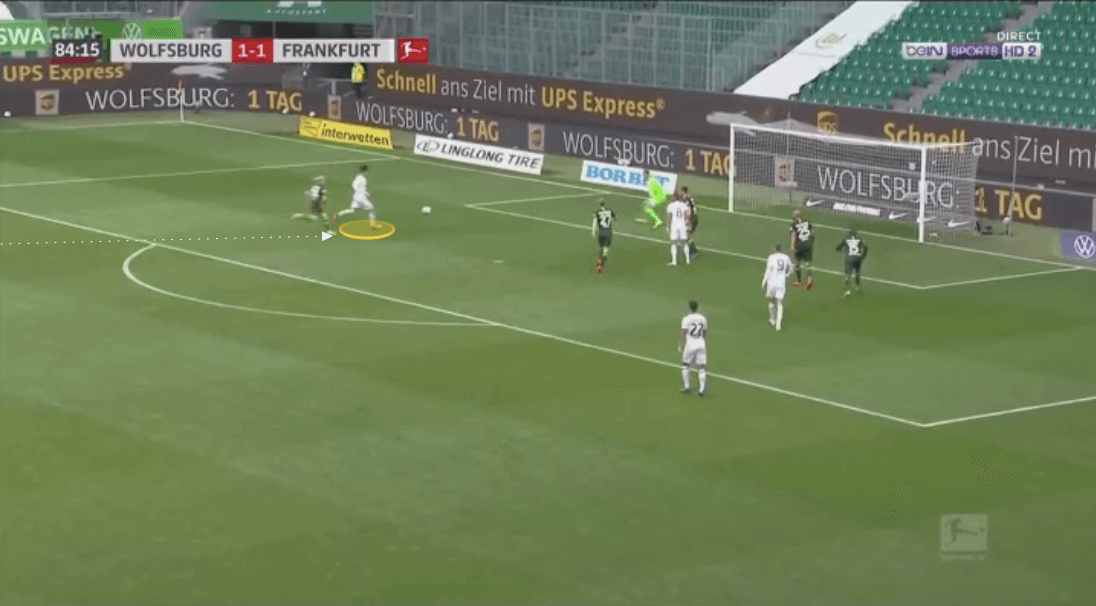 This lapse of concentration at the end means Wolfsburg hold onto sixth place on goal difference. And they have themselves to blame for such a sub-par performance following an outstanding one earlier in the week. With the quality of chances, they had this shouldn’t have been close, but credit to Frankfurt for sticking to their game plan throughout getting their reward at the very end as Wolfsburg let it slip.