Roma faced off against Sassuolo at the Stadio Olimpico this past week in what was another interesting week of Serie A football. The game finished 0-0, but Roberto De Zerbi and Sassuolo will certainly be the most disappointed from this outcome as they have been on an incredible run of form as of late, as well as the fact that Roma were reduced to ten men late in the first half.

It was also a good opportunity for I Neroverdi, currently in fourth place, to extend the points gap to four points over Roma who are right behind them, sitting in fifth. Paulo Fonseca was hoping that his side could build on their decent 3-1 victory on Thursday night against Young Boys in the Europa League, after a humiliating 4-0 defeat the week prior to Napoli, however, due to the early red card, they were forced to accept a point.

Sassuolo were also hoping to redeem themselves after a 3-0 defeat to Inter in their previous Serie A game, which was their first defeat of the season; however, they were simply unable to break down Roma’s brilliant defence.

This article will be a tactical analysis of the draw between the two sides. It will be an in-depth analysis of the strengths and weaknesses of both sides in their tactics, throughout the game, as well as taking a look at where each team could have improved in their set-up. 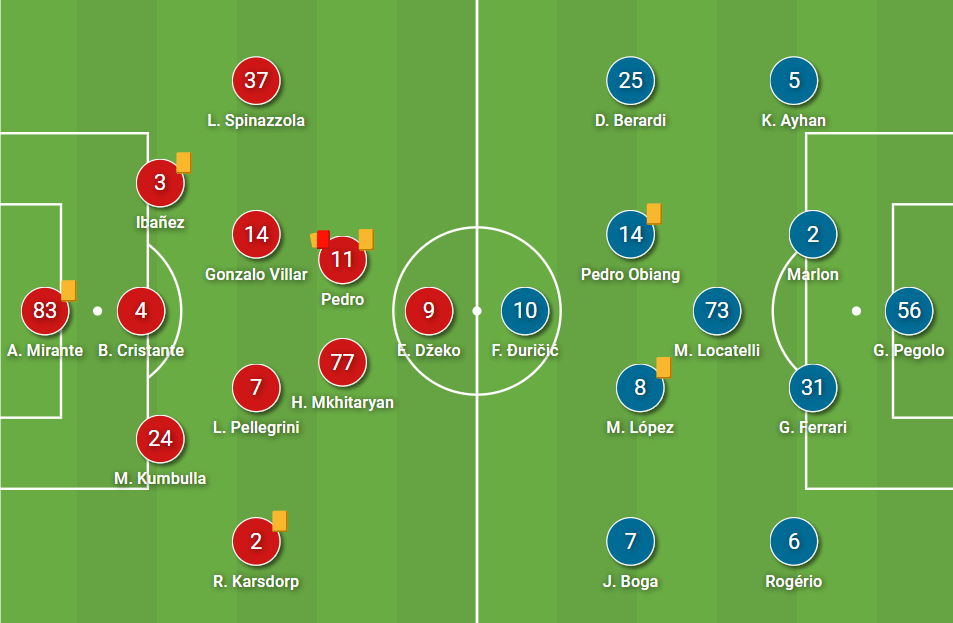 Sticking with their 3-4-2-1 formation, which has become the default formation under the ex-Shakhtar Donetsk manager, as opposed to the 4-2-3-1, only Marash Kumbulla was brought in replacing the injured Gianluca Mancini. Fonseca did not have much of a choice considering the injury crisis that the club is plagued with, which includes ex-Manchester United defender Chris Smalling.

In the midfield, Gonzalo Villar replaced Jordan Veretout in the double-pivot in midfield alongside Lorenzo Pellegrini, as the Frenchman another Roma player who picked up an injury recently, whilst the front three of Henrikh Mkhitaryan, Pedro, and Edin Dzeko all maintained their spots in the starting lineup.

For Sassuolo, there were also a number of changes made by the manager, De Zerbi, from their previous outing. Goalkeeper Andrea Consigli did not make the trip for the visitors and was replaced with the veteran, Gianluca Pegolo. Vlad Chiriches and Jeremy Toljan were replaced with Marlon and Kaan Ayhan.

The midfield double-pivot in I Neroverdi’s 4-2-3-1/4-1-4-1 consisted of Manuel Locatelli and Pedro Obiang, with Filip Djuricic moving into the centre-forward role, allowing Maxime Lopez to play behind him as a number 10, supported by Jeremie Boga and Dominico Berardi on the flanks as usual.

Sassuolo are a side built around retaining possession and building structured positional attacks by playing through the thirds. In this section, we will look at how Sassuolo set up when they were in the build-up and established possession phases of their positional attacks. The image above depicts an example of how De Zerbi’s side looked in possession when they were in the first third of the pitch, trying to circulate the ball around the backline in order to find gaps in Roma’s defensive block to play through and progress forward.

Sassuolo used both a midfield two and midfield three in this game depending on the area of the pitch that they had possession in. In this image, they are in the first third, and so use a double-pivot of Locatelli and Obiang.

The two centre-backs would stay at close proximity to each other whilst the fullbacks would also remain back to help the central defenders to circulate the ball from left to right, trying to find gaps in Roma’s press.

Lopez, deployed as a number 10, would play between the lines and position himself into a passing lane between two of Roma’s central midfielders in order to act as a progressive passing option. Another example of this 4-2-3-1 build-up play structure can be seen in the following image; 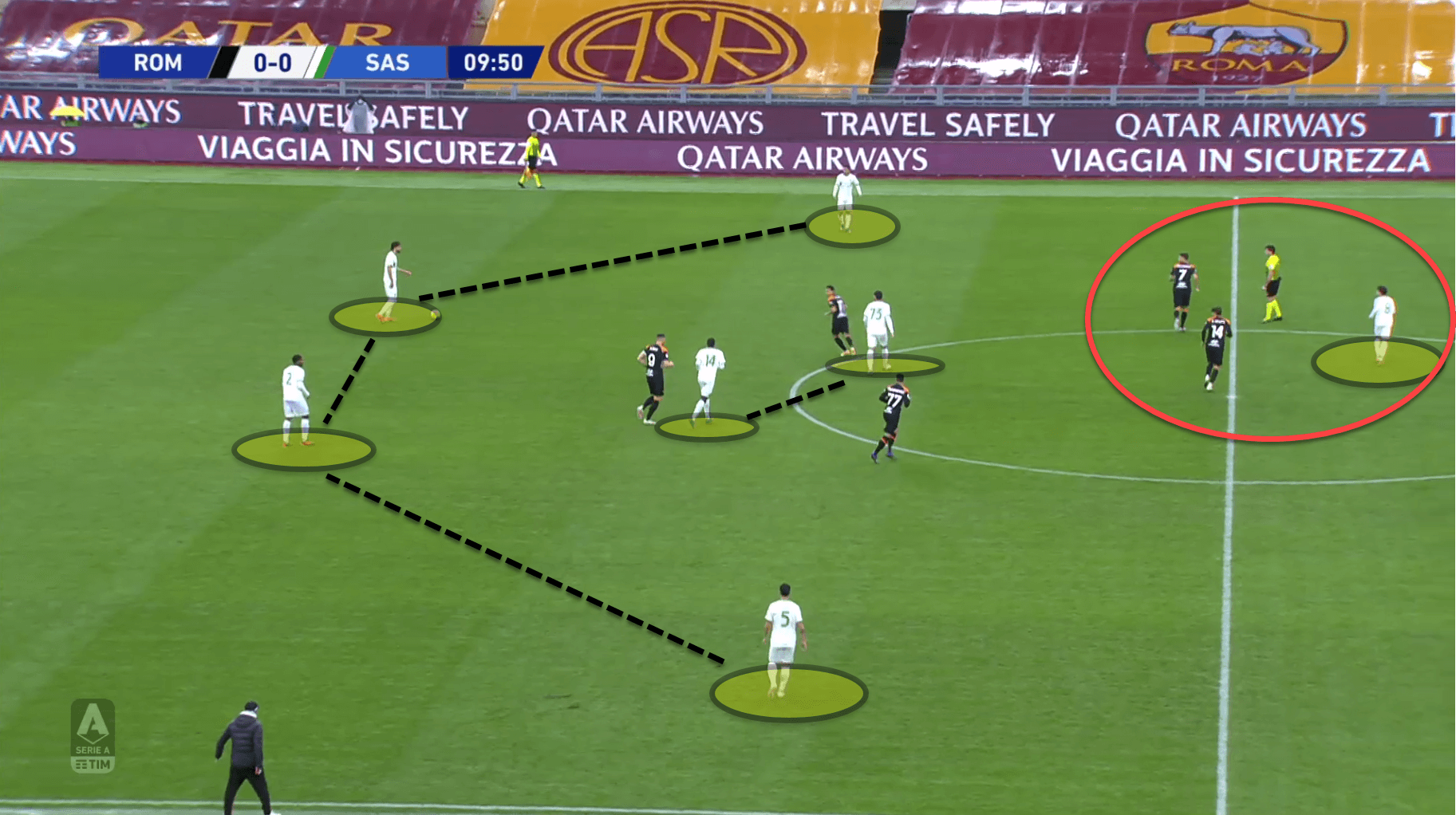 However, once I Neroverdi managed to progress through the first third of the pitch into the middle third, which was typically done through the flanks in this game, their shape would slightly change. 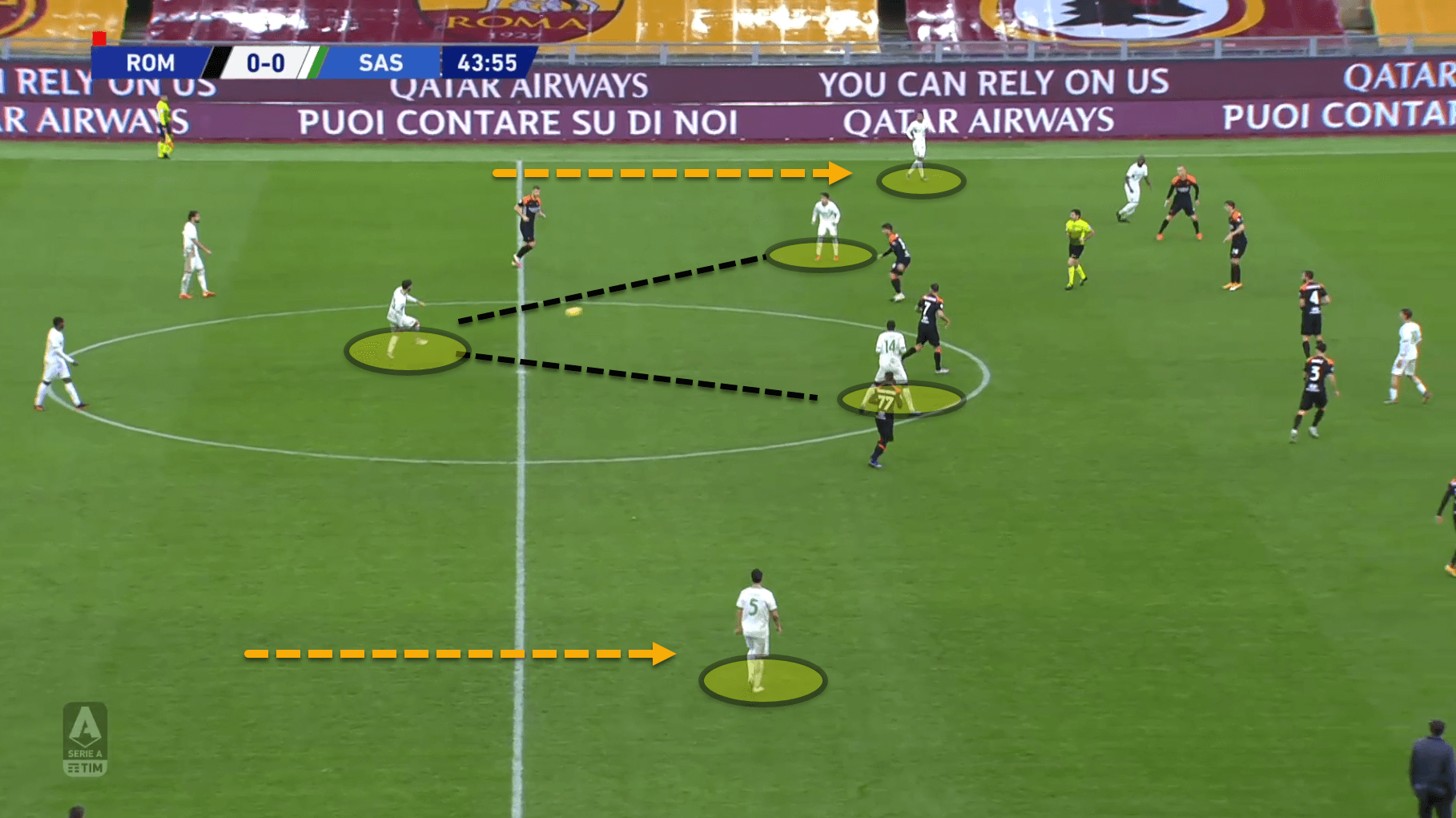 Their shape, as can be seen above, changed to a 4-3-3 with Obiang pushing up into a more advanced role allowing Locatelli to act as a single-pivot in front of the defence.

Lopez’s role would also change slightly. Instead of playing as a free-roaming number 10 who was given license to drift into space between the lines, he now played in a slightly more restricted role in the middle third, usually sitting in the halfspace as can be seen in the previous image, in order to create triangles on the flanks with the winger and fullback.

The fullbacks pushed much higher as they were no longer needed to circulate the ball with the two centre-backs. Rogerio pushed higher than Ayhan in this game as Ayhan is more of a centre-back playing at right-back and so would be largely ineffective going forward.

Roma, on the other hand, had a specific plan to make it difficult for Sassuolo to build through the thirds, stifling their build-up play and forcing them to be rather passive on the ball. Sassuolo finished the game with 57 percent possession compared to the home side’s 43 percent.

Roberto De Zerbi’s double-pivot tend to stay central and maintain a safe distance between each other when Sassuolo have established possession. To stifle their positional attacks and progressive passing options, Fonseca blocked off the passing lanes to the double-pivot of Locatelli and Obiang and ensured that two of his players would sit on them or cover shadow them when Sassuolo had the ball with their backline. Here, we can see this excellent defensive tactic in action. Roma’s defensive shape was a 5-3-2 mid-block, with Mkhitaryan dropping back to create a midfield three and Pedro pushing across next to Dzeko to act as a centre-forward out of possession.

Both Dzeko and Pedro would sit in front of the Sassuolo double-pivot, cutting off the passing lanes into them, and were supported by the three central midfielders who stay compact and close to their forwards in case the ball did make its way into either Locatelli or Obiang.

The only passing lanes available for I Neroverdi were runners in behind the Roma backline, who were positioned rather high, or else through the fullbacks, with Sassuolo’s centre-backs mainly choosing the latter.

If the centre-backs were taking too long to decide what pass to play, which happened countless times, then the ball-near centre-forward for Roma would engage in a press, but they always made sure that they cover-shadowed the pivot player that they were marking. 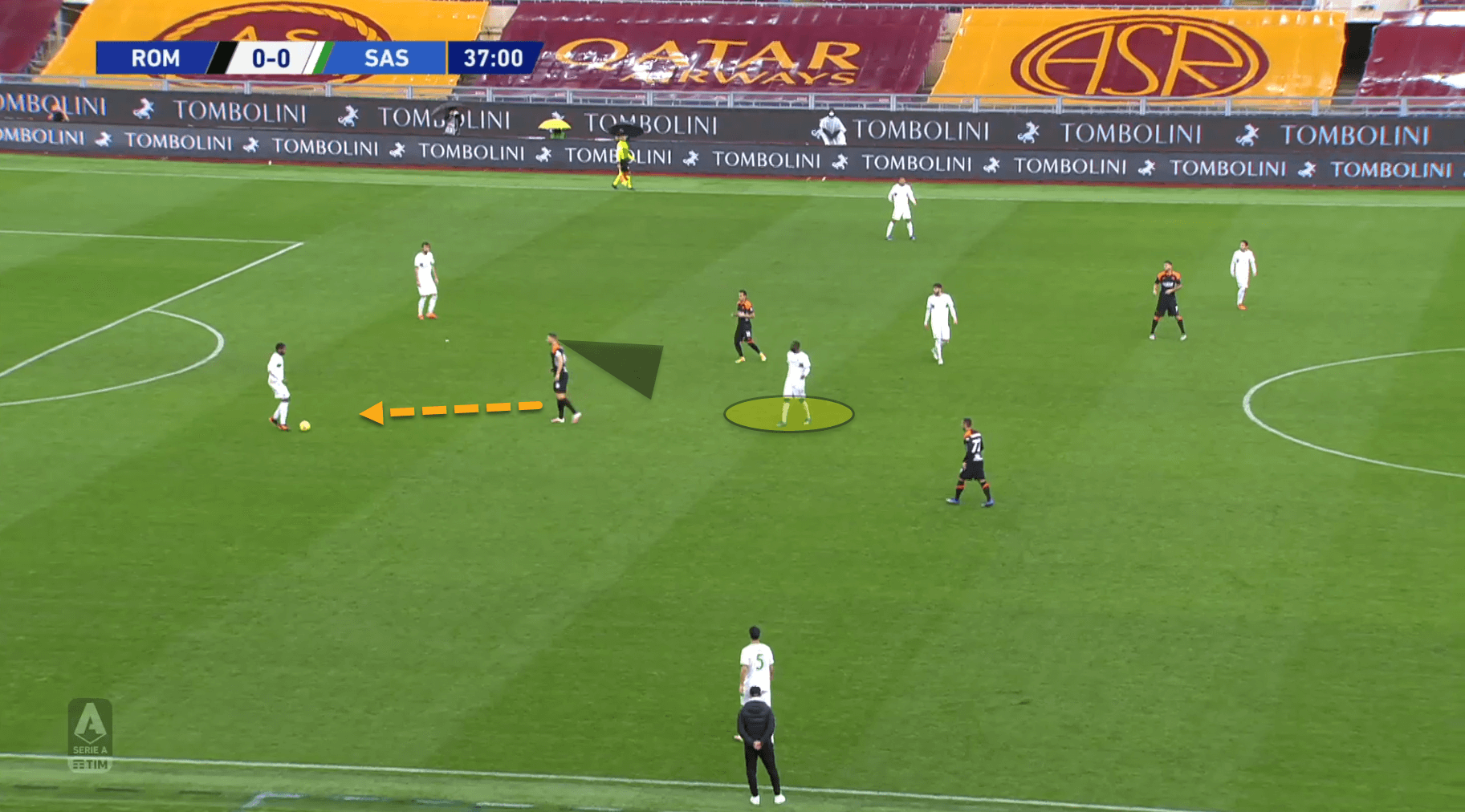 In the image above, we can see this exact situation. Marlon has taken too long on the ball, and so Dzeko pushes out to press him, making sure the passing lane into Obiang is closed off, forcing the centre-back to play to his partner in defence, or to the fullbacks.

The Sassuolo double-pivot were far too passive when their side had the ball in these situations and should have tried to stretch the forwards apart more by dropping into different areas of the pitch, such as to the side of the centre-backs, acting as a false fullback, which would have split Roma’s forward press.

However, Roma executed their defensive tactics excellently, and Fonseca should be given huge credit for reducing one of the most exciting teams in the world to sideways and backwards passes.

Whilst in the final third of the pitch, Sassuolo like to create wide overloads on the flanks in order to create goalscoring opportunities. They tend to try and break the opponent’s defensive line from the wide areas and put crosses into the box with their fullbacks and wingers who double up on their opponent’s wide players. 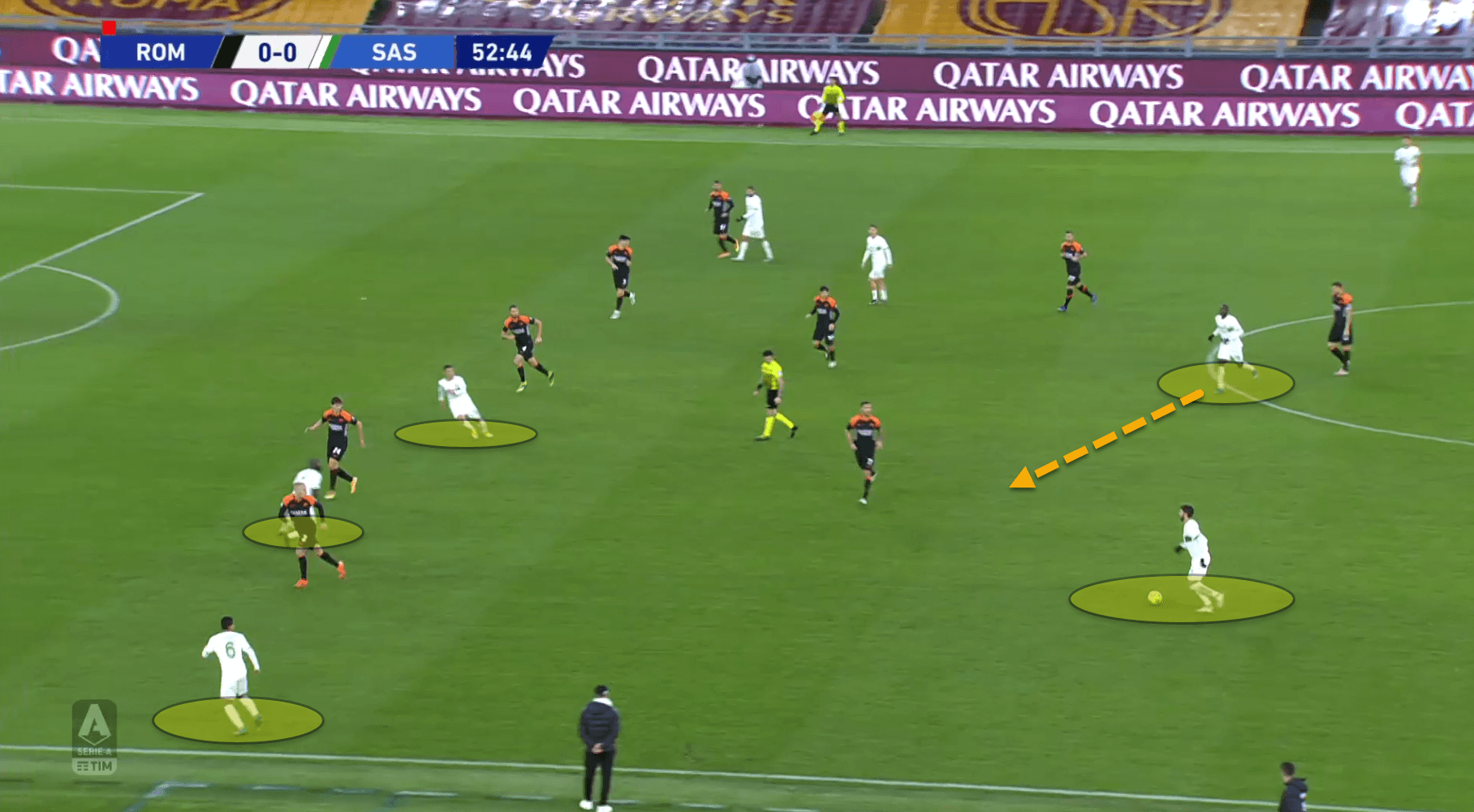 However most of the time, particularly up until the red card, I Giallorossi would match Sassuolo for bodies in the wide areas so to nullify their attacking strengths in these areas. They did this by shifting their entire defensive block over to one side of the pitch. In the image above we can see how Roma nullified this threat on the flanks by matching Sassuolo for men so that they couldn’t successfully overload and create chances down the flanks.

However, I Neroverdi had a backup plan in the case of this happening, and so would position their ball-far fullback and ball-far winger wide on the far side. This allowed them to be able to switch the play successfully when there was no space to play into on the overloaded side. From there, they would be able to attack down the opposite flank instead before Roma’s defensive block was able to shift across to the other side of the pitch.

Fonseca had to tweak Roma’s tactical set up when Pedro was sent off in the 40th minute for a second bookable offence. Up until that point, the home side were excellent, nullifying Sassuolo’s attacking set up and hitting them on the counterattack, creating a number of high-quality chances, particularly from the left side of the pitch.

Prior to the booking, I Giallorossi’s shape when they had the ball in the established possession phase looked to be a 3-4-2-1/3-5-2. This depended on the positioning of the wingers. Here, we can see Roma’s typical shape in possession. Their three centre-backs split very wide in order to cover the full width of the pitch and to allow the wingbacks to get forward. Depending on the ball-side, the ball-near wingback would drop short to act as a passing option in the wide areas, helping the backline to circulate the ball around. The ball-far wingback would push further up to be a progressive switch of the play option for the team.

The double-pivot of Pellegrini and Villar were aided by Mkhitaryan who would drop into the same area creating a midfield three at times, providing an extra option for them to play to in order to progress the team further up the pitch. The Armenian plays almost as a false winger, much like Borussia Dortmund use in their 3-4-2-1.

Once the red card was awarded to Pedro, the shape-shifted to a 3-4-2 in possession, with Mkhitaryan playing in a similar role as a false nine. 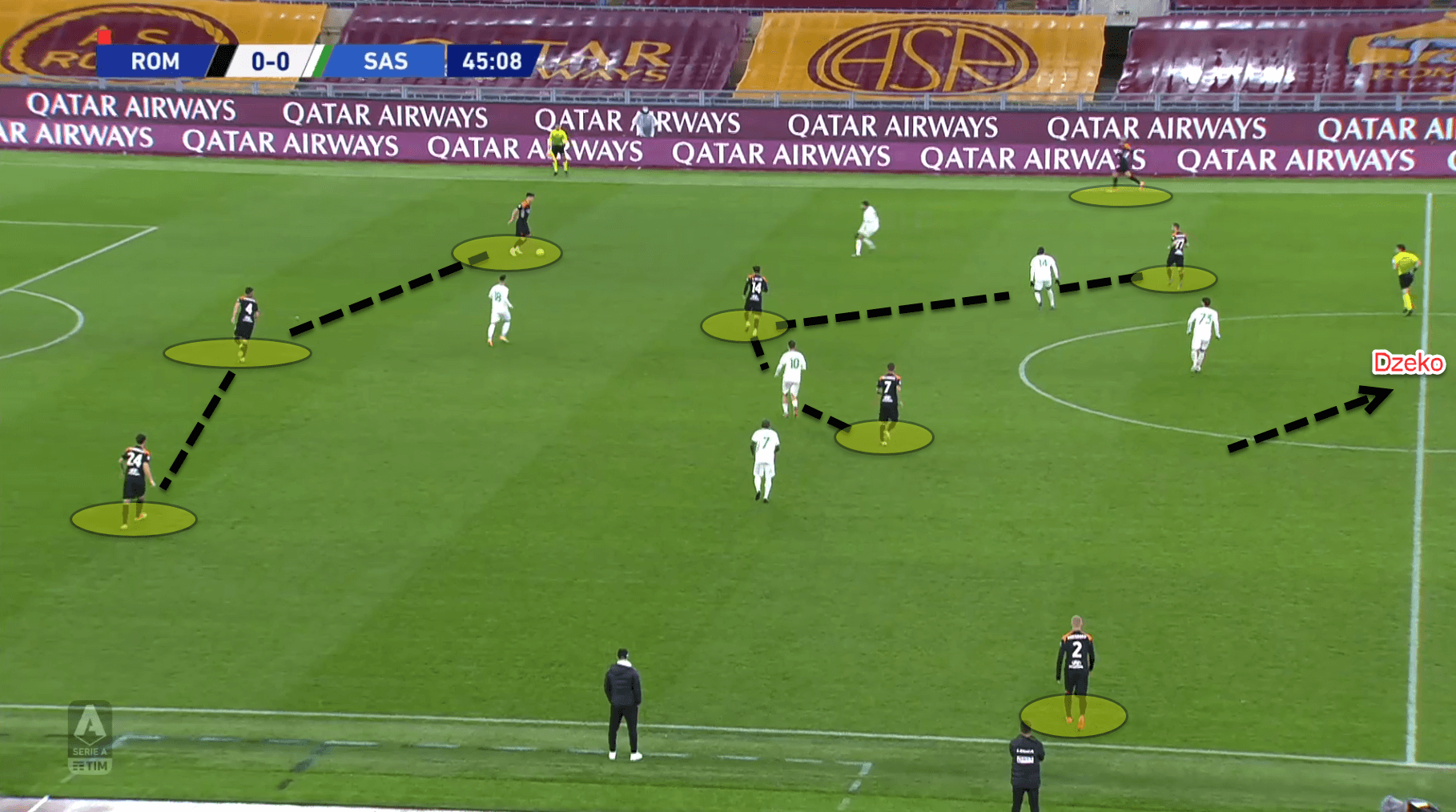 The structure remained exactly the same, with Mkhitaryan creating a three-man midfield making a 3-5-1/3-1-4-1 shape in possession. The only difference was that Dzeko was usually isolated, left to chase long balls into the channels and hold up the ball until supporting players arrived.

The red card also meant that Roma changed their approach in a defensive aspect, opting to sit much deeper in a low block and simply deny space for their opponents to play into in the final third. 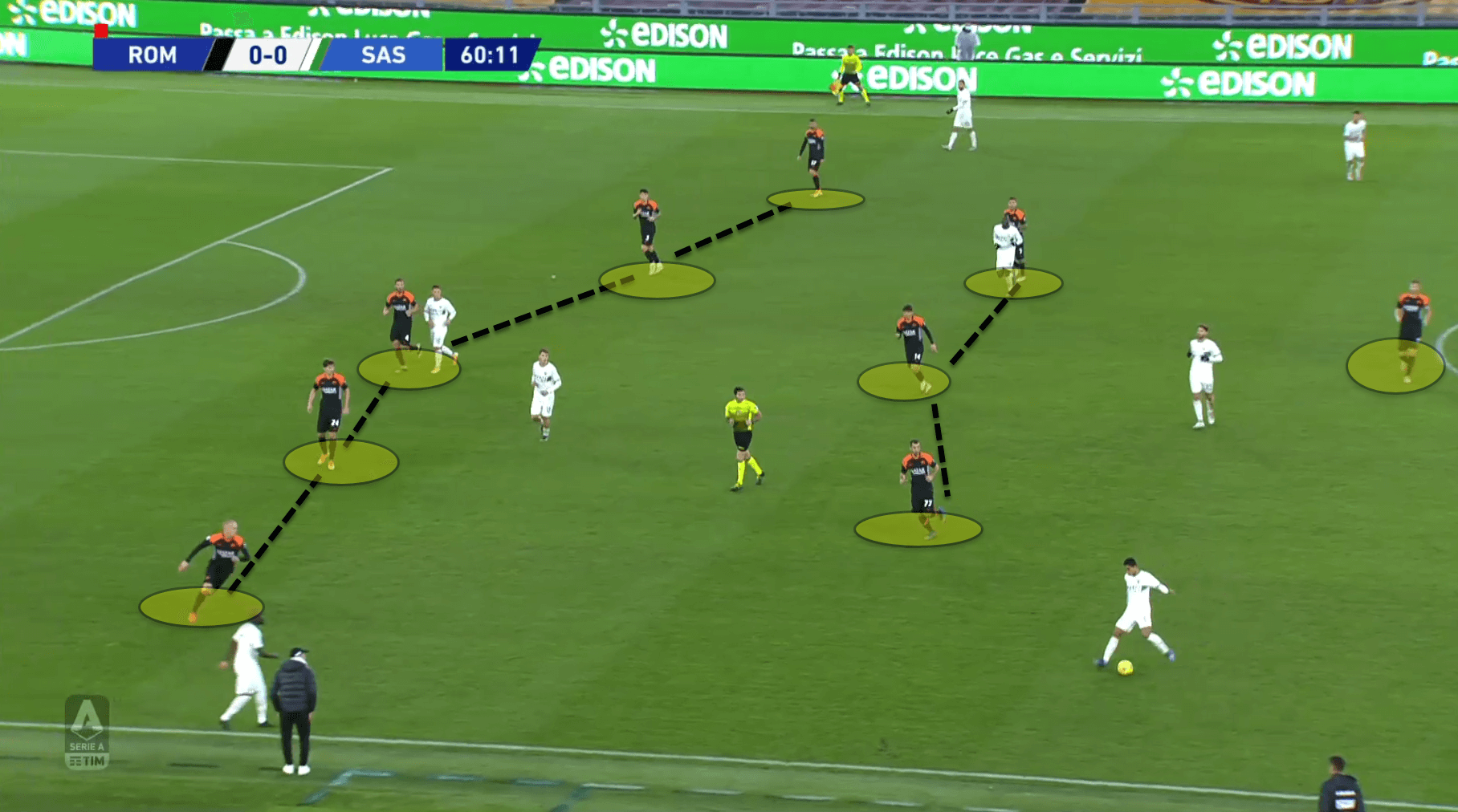 This 5-3-1 low block limited the space that Sassuolo had to play into, and so De Zerbi’s men resorted to playing lateral and backward passes, rarely creating any solid chances to score, which can be seen in the metric below. As stated before, De Zerbi will quite possibly be the most disappointed of the two managers with the goalless draw. It was an extremely tactical battle and one which was fought under tough weather conditions with a drenched pitch. There are certainly more positives than negatives to take from this game for both sides and will be looking to build on these when they play their next games, with Sassuolo facing off against Pippo Inzaghi’s Benevento, and Roma facing Bologna away from home.