In the Serie A last Friday night, Sassuolo hosted strugglers Torino at the Mapei Stadium in what was an exhilarating game which finished 3-3, clouded by an immense fog in Reggio Emilia.

Sassuolo have been by far one of the best sides to watch in Serie A this season, under the guidance of their manager Roberto De Zerbi, and following the 3-3 draw with Torino, they are sitting in the European spots on the league table. Their possession-based, fluid style of football has earned them plenty of plaudits in recent years and tonight, in an attacking sense, this flourished again.

Torino on the other hand, have struggled massively since the beginning of the 2020/21 season under their new manager Marco Giampaolo, and are currently sitting in the relegation zone following Friday’s result. The draw against Sassuolo was their first point of the season in four matches. Despite conceding three goals, however, Giampaolo will be thrilled with his side’s attacking ruthlessness, which is an area where they have also struggled during their matches.

This article will be a tactical analysis of the draw between I Neroverdi and Il Toro. It will be an in-depth analysis of the strengths and weaknesses of both sides in their tactics, throughout the game, as well as taking a look at where each team could have improved in their set-up. 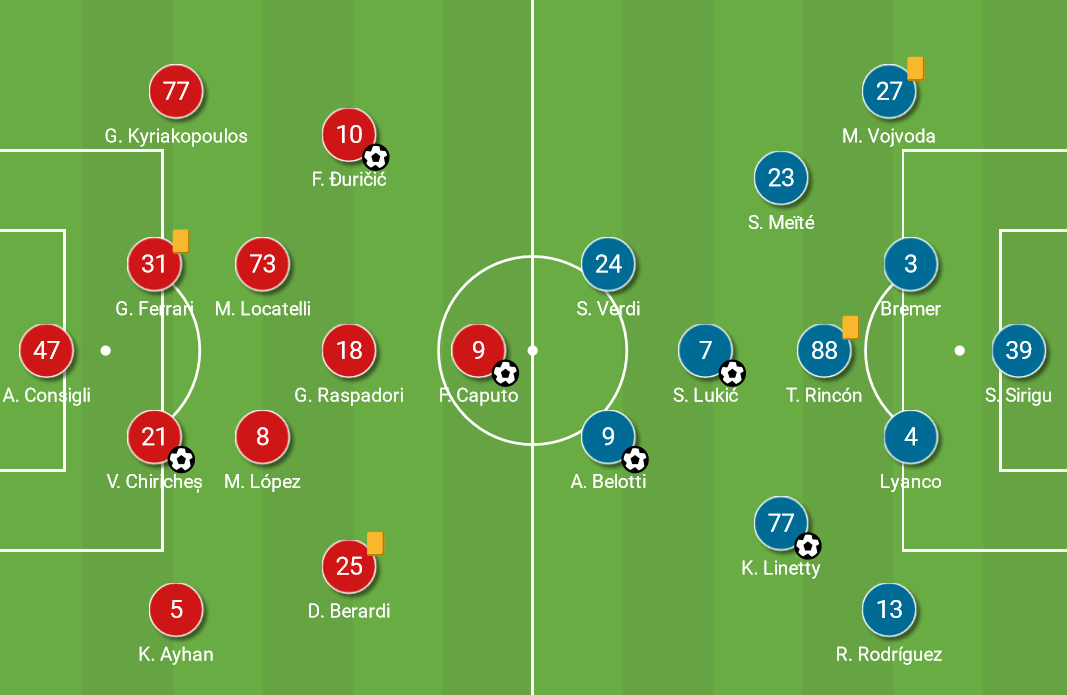 De Zerbi deployed his usual 4-2-3-1 formation in this game, but there were a number of changes in the starting lineup to the one that beat Bologna in their previous match.

The back four and goalkeeper remained mostly the same apart from Kaan Ayhan coming into the side at right-back in the place of Mert Muldur. Locatelli kept his place in the double-pivot but was partnered alongside Maxime Lopez instead of Mehdi Bourabia.

Giacomo Raspadori started in the attacking midfield role instead of Filip Djuricic who shifted over to the left wing in place of Hamed Junior Traore, the brother of new Manchester United signing Amad Diallo Traore, who took his place on the bench.

Marco Giampaolo stood by his favoured formation, the 4-3-1-2, for this matchup and also stood by his players, naming a mostly unchanged lineup.

Gleison Bremer came into the starting team in place of the experienced Nicolas N’Koulou, with Simone Verdi up front instead of new loanee Federico Bonazzoli, due to Simone Zaza’s injury, as the only other change to the starting lineup.

As stated previously, despite the poor run of results for Torino this season, Giampaolo has stuck with his favoured formation, one that he deployed at nearly every club he has been at in his career, the 4-3-1-2.

In this compact system, he set his side up far more defensively than he had done in previous games. This is because he knew just how good Sassuolo are on the ball and so he set out to nullify their options in the central areas. 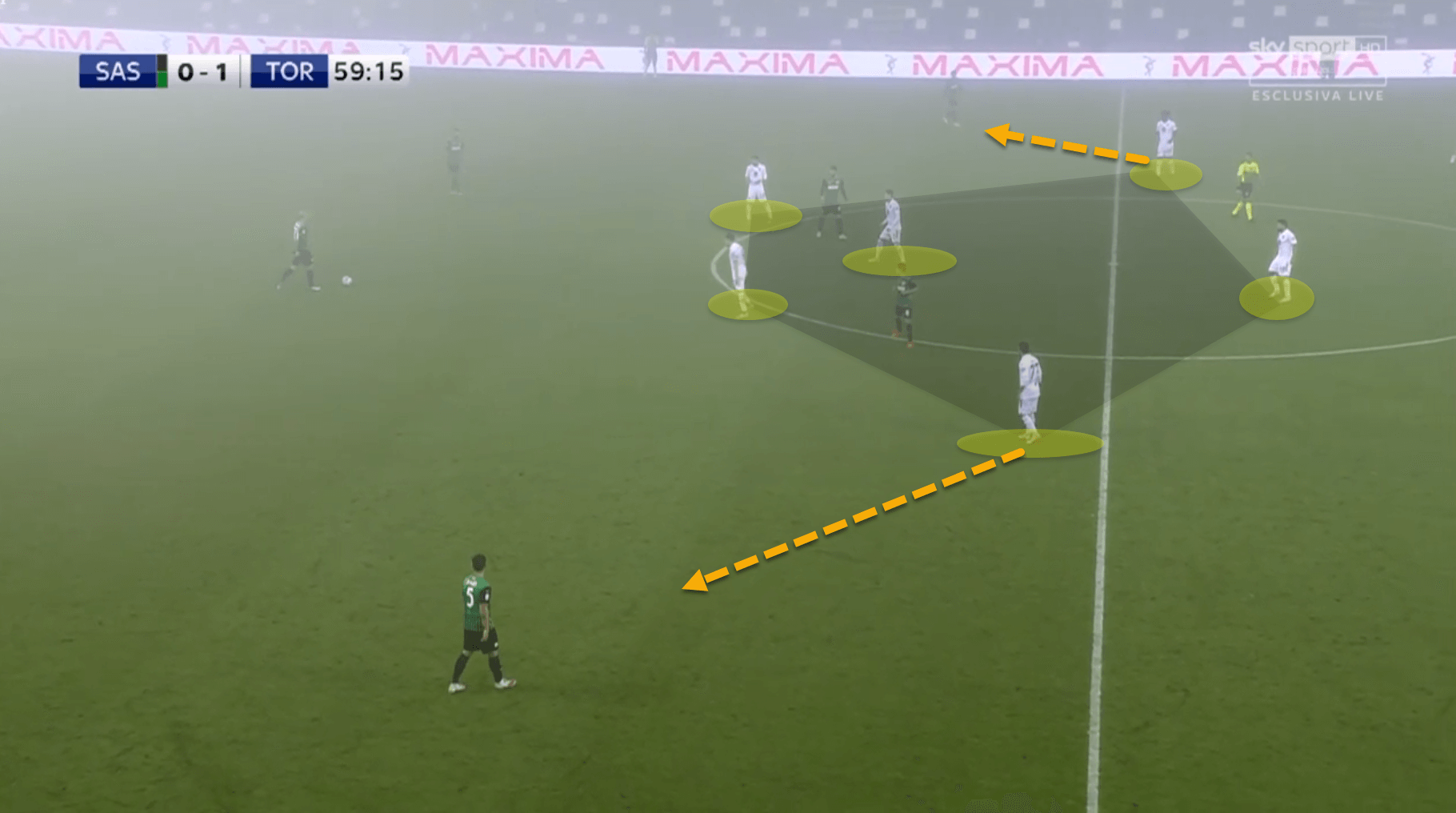 In the image above, we can see Torino’s zonal block when Sassuolo had the ball in the build-up phase. They would form a very compact block in the central areas with their midfield four and two centre-forwards. The aim of this zonal defensive strategy was to prevent Sassuolo from playing in the central corridors, which was extremely successful for the majority of the game.

The centre-forwards would apply little to no pressure to the Sassuolo centre-backs and goalkeeper and were happy to allow them to have the ball in these harmless areas. However, once Sassuolo managed to work their way inside these central spaces, Torino would quickly swarm the ball-carrier looking to either win the ball and counterattack or else force them to play back outside into the wide areas. 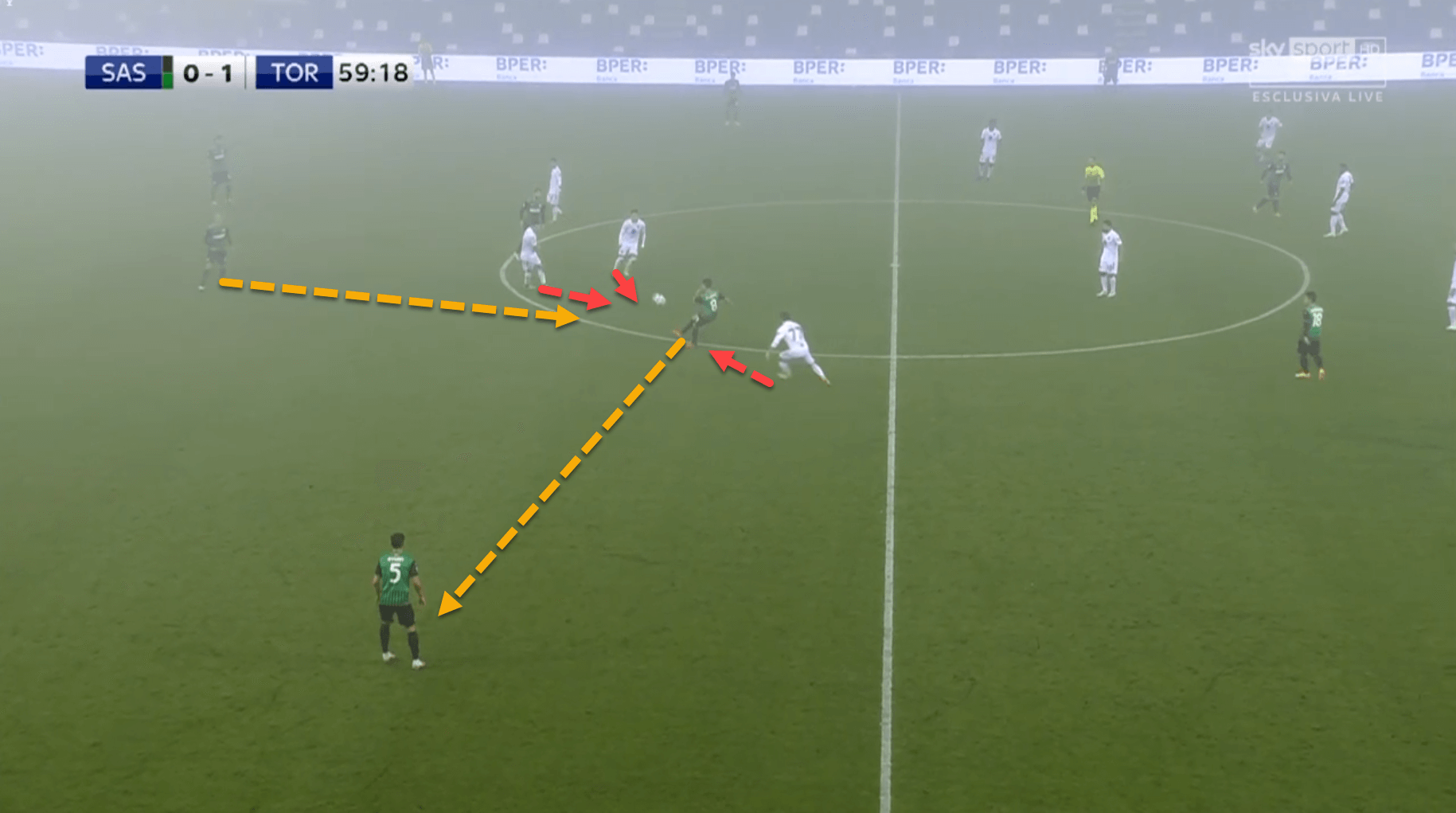 This is an example of how Torino would instantly force Sassuolo out of their zonal block. Chiriches managed to play Gomez through the Torino midfield structure, but as he was being closed down by three players, he did not have enough time to turn on the ball and play forward, so he had to play back out of the zonal block to the full-back.

Sassuolo are a side who excel once they are given space centrally as they are able to create numerical overloads in these kinds of areas. By denying them this space and forcing them outside the zonal block, it weakens their attacking approach.

Torino’s out of possession shape was a 4-3-1-2 mid-block and when Sassuolo advanced further up the pitch, they would maintain their defensive structure even when they were forced to defend in a low block. The main difference being that the wide central midfielders were tasked with closing down the fullbacks who ventured forward to get involved in the attack. 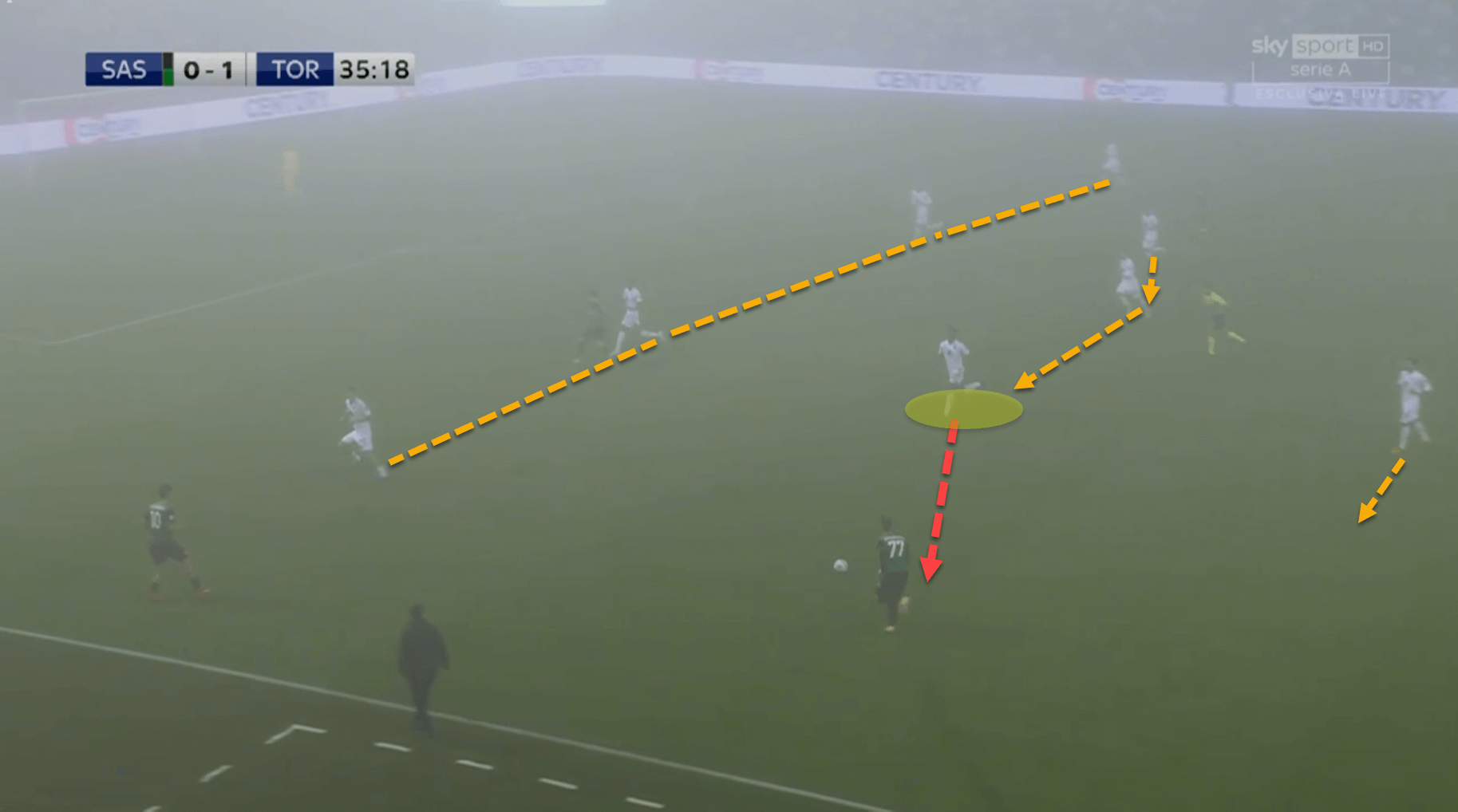 In this example above, Soualiho Meite has darted across to close down the on-rushing Giorgos Kyriakopolous. As he is leaving the central areas, the other two central midfielders need to be in coordination with him to shift across and cover the spaces. The Torino midfield worked exceptionally hard at covering not only the central corridors but also the flanks throughout the game.

Attacking on the flanks:

Sassuolo were prepared for the Torino zonal block and De Zerbi knew that it would be very difficult to play through a central area comprised of eight players including the two centre-backs.

His plan was to attack in the flanks. This is because in a narrow midfield formation like the 4-3-1-2, there are no wingers, only full-backs, meaning there is a lot of space in the wide areas to play into. There is particularly a lot of space for the full-backs to venture forward into.

Sassuolo managed 54 attacks throughout the entire game, with 38 of these attacks coming from the wide areas. The left flank was the most utilised section of the pitch, and it was clear that it was a tactical ploy by the Italian boss. 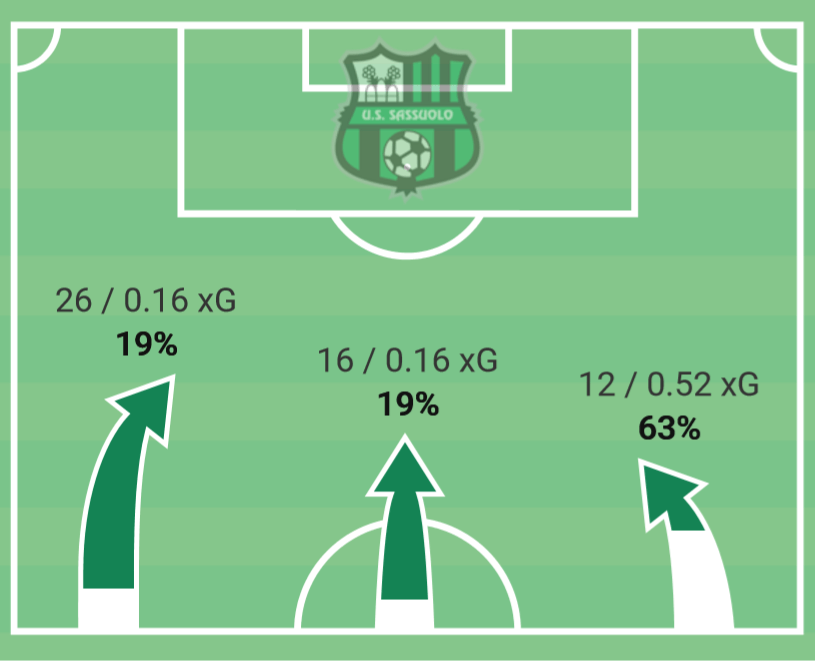 The reason why De Zerbi chose to instruct his team to attack down this side is unclear and is open for debate. Perhaps he believed he had stronger attacking players down the left flank, but he also may have felt that Torino were weaker defensively down this side. 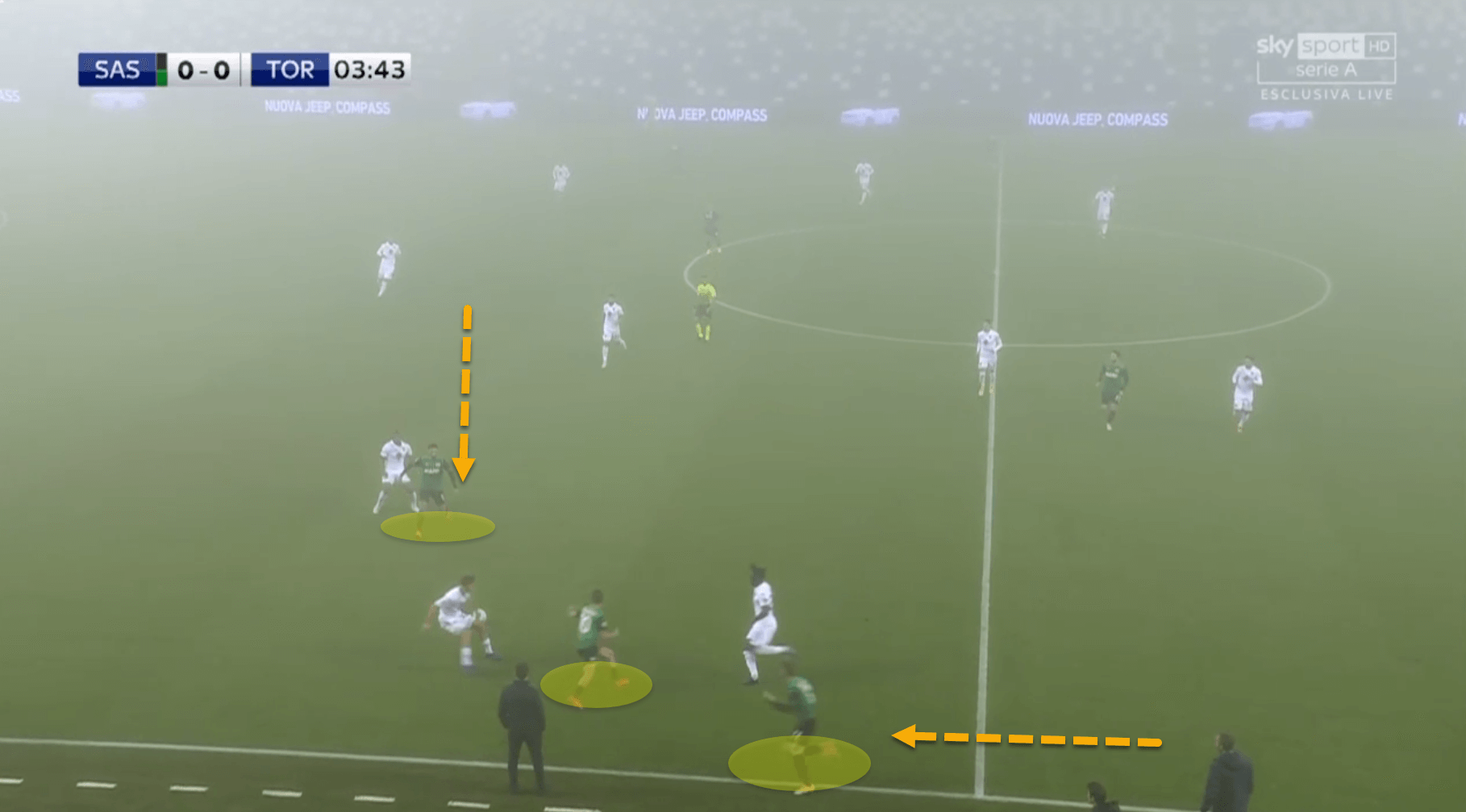 In the still from the game footage above, we can see an instance of Sassuolo creating triangles and positional interchanges in order to try and break through their opposition’s defensive line in the wide areas.

Sassuolo’s forward line is quite small in terms of height and so they rarely played long to attack the depth of the pitch in behind Torino’s backline, which lacks pace. Playing long and trying to catch the backline out would have made their attacking variety more unpredictable, however, they only played 26 long passes in the entirety of the game, even though they had 663 total passes completed, which is an exceptional statistic if not amusing.

Instead of playing long, Francesco Caputo would come across and create numerical superiority against Torino on the left side alongside Kyriakopolous and Djuricic, if not match Il Toro for bodies on this flank. The positional interchanges were a ploy to disorientate the backline, allowing for Sassuolo to get themselves through to give them a chance to cross the ball into the box.

This did not work as well as De Zerbi would have hoped as Torino dealt with the majority of their crosses into the box. I Neroverdi put 13 crosses into Torino’s penalty area, only successfully completing 3 of them, which is a success percentage of merely 23% despite being from quite dangerous areas.

When Marco Giampaolo took over from Moreno Longo in the summer of 2020, it was widely believed that this appointment would signal a new era, a better era, of football for the Turin club. Giampaolo’s philosophy is built around possession-based, structured, high pressing football.

This is a work in progress, but so far, they have still displayed many attributes from their previous managers. None more so than their tactical use of the long ball to their two centre-forwards.

In this match, Torino managed 31 long balls in total, and whilst this is not much more than Sassuolo’s 26, Il Toro only managed to 196 passes, with only 32% of the ball possession share. Of these 31 long passes, 22 managed to reach their intended target which is a fantastic feat.

As Torino’s centre-backs are not comfortable on the ball, when Sassuolo applied pressure to them, they were instructed to play long. When they were in the build-up phase, Andrea Belotti and Simone Verdi would prepare themselves for the long ball by positioning themselves in the channels between Sassuolo’s full-backs and centre-backs. 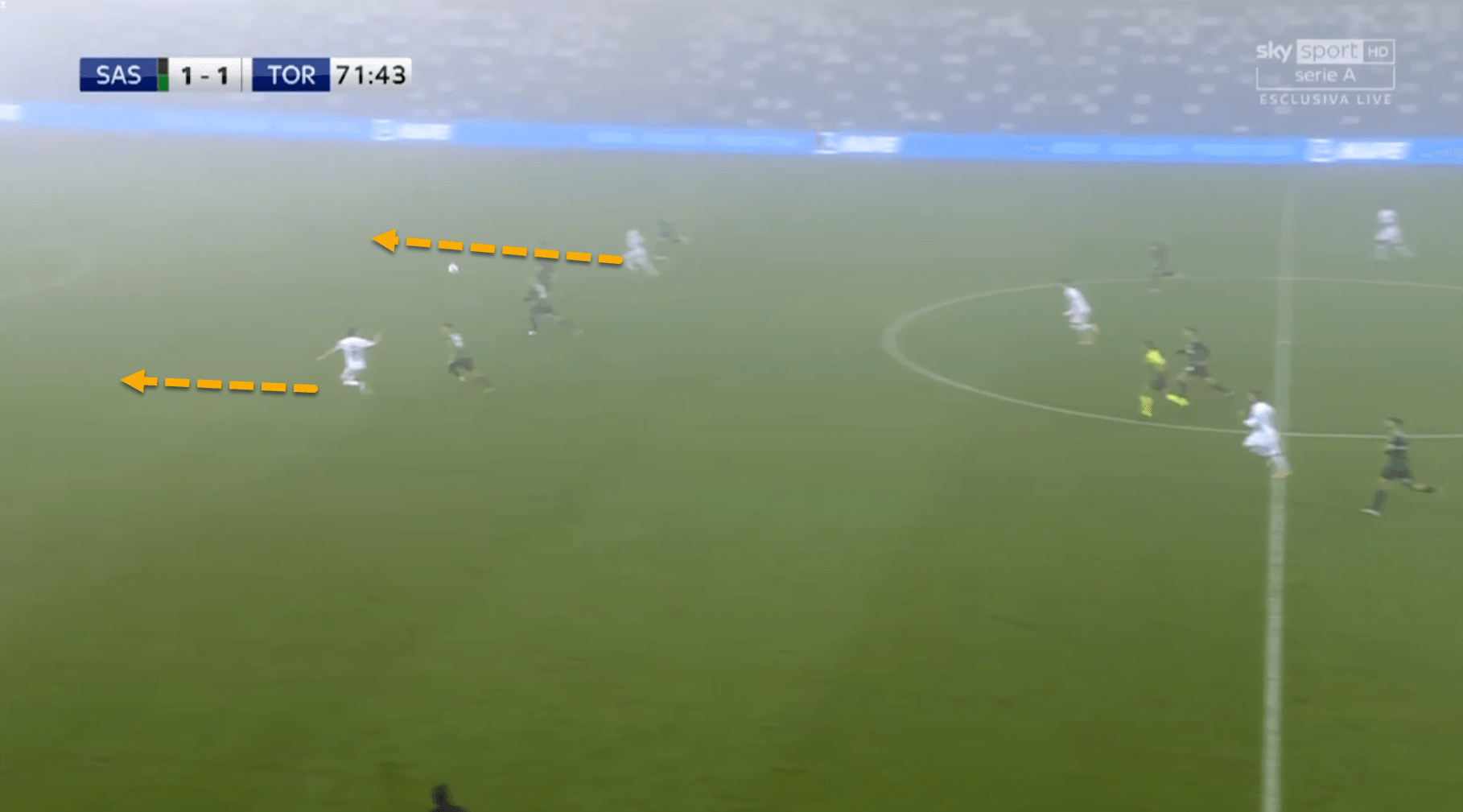 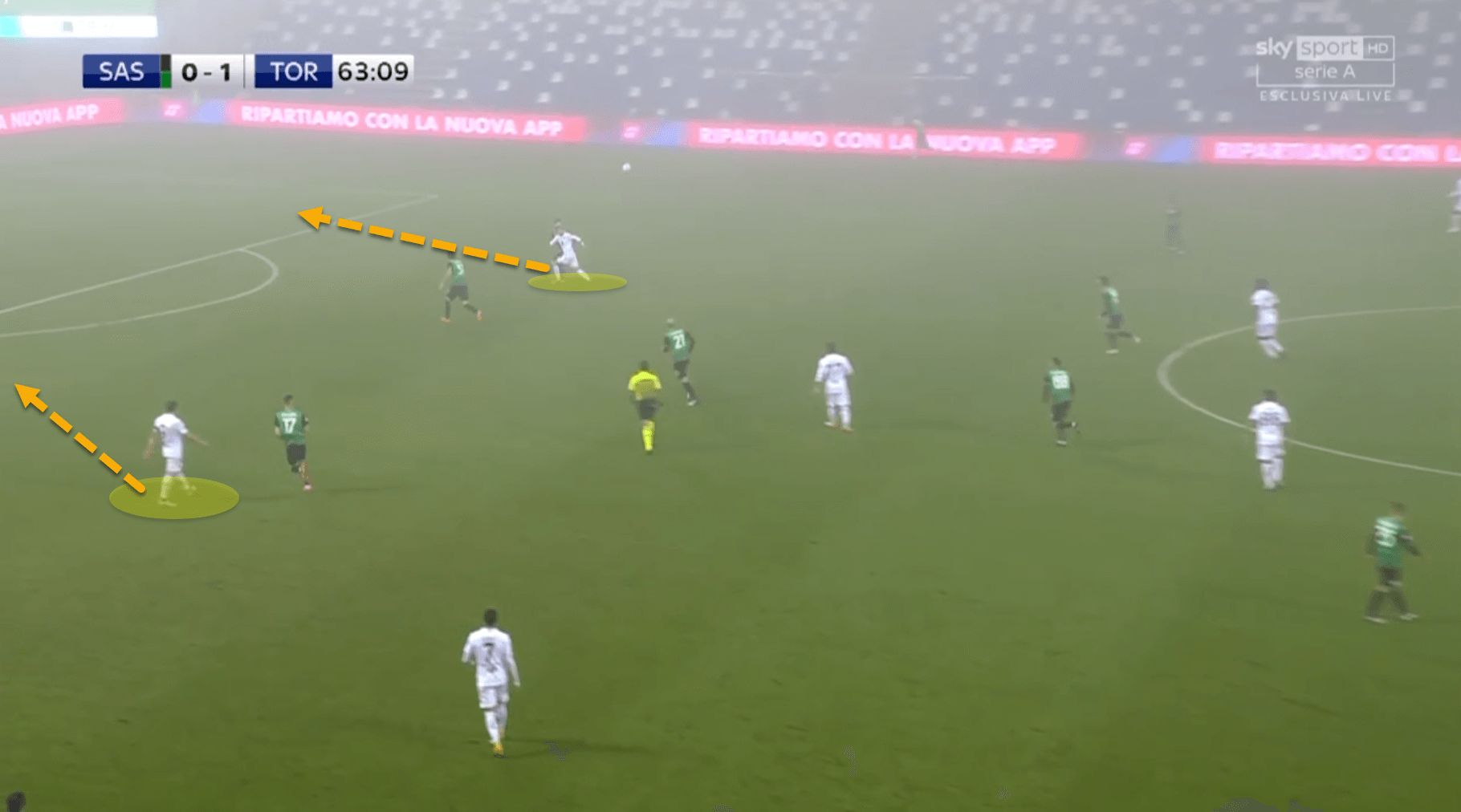 The two images above were examples of how the two centre-forwards would position themselves to anticipate a long pass. They would split wide so to stretch the opponent’s defence and giving them more of an opportunity to be able to latch onto the ball.

In this match, two of their goals came from this exact type of long ball. Sasa Lukic as the attacking midfielder, would follow suit closely behind and was always there to challenge for the second ball if it was knocked down by either of the strikers.

This was a successful tactical ploy by Giampaolo and was brilliantly executed by the players, as Sassuolo were unable to deal with the aerial threat posed by Torino as both men won a combined total of 78% of their aerial duels in this match.

One of the key turning points in this match was Giampaolo and his coaching staff’s decision to change to a 5-3-2 from their 4-3-1-2 and sit in a low block. This decision happened when they scored to make the game 3-1, and in hindsight was one of the worst tactical decisions the manager could have made.

In the 4-3-1-2 they were denying space in the central areas to Sassuolo, which in turn nullified their creativity. This was because they had six players in a zonal block around the central corridors. Once they reverted to a 5-3-2, they then only had five guarding the central areas, which allowed Sassuolo to gain control of these areas for the first time in this game. 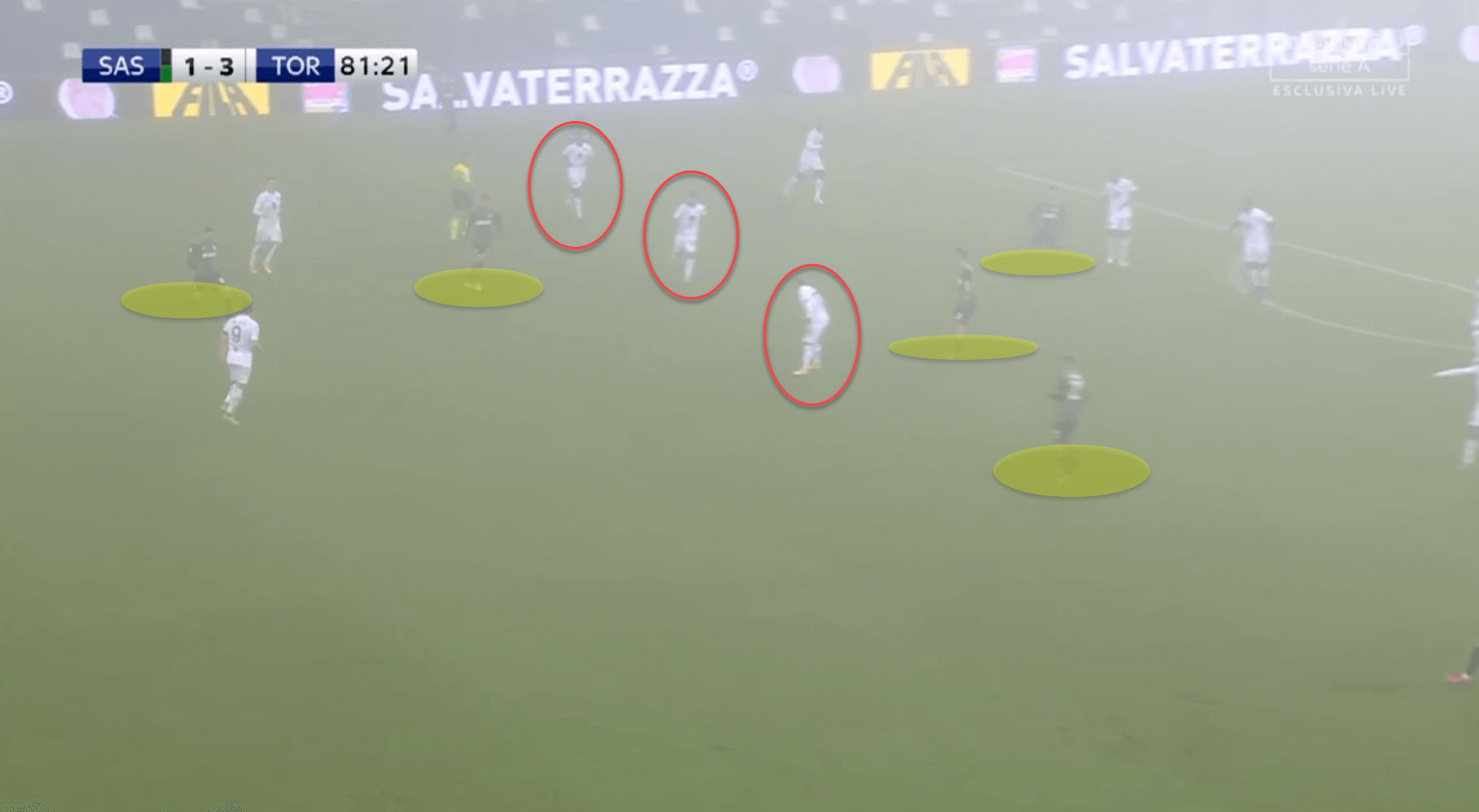 Here we can see Sassuolo finally starting to gain a foothold in the midfield, and they managed to score two goals in quick succession after Torino changed to a 5-3-2 low block.

Since there was no attacking midfielder anymore, due to the switch, to press the ball-near pivot player, Sassuolo’s holding midfielders had plenty of time and space on the ball to pick a pass to a player in between the lines.

At the time this change in Torino’s tactics would have made logical sense as Sassuolo were creating numerous chances from the flanks towards the end of the game. Having an extra man at the back allowed them to have a man over in defence. However, in the grand scheme of things, it was purely tactical naivety which cost them the three points.

It is quite a pity how much the fog affected the visual essence of this game for the viewers at home as it was an incredibly tactical and entertaining affair between two sides who desperately wanted the three points for their own respective causes.

Torino will of course be the more disappointed of the two having squandered a 3-1 lead with ten minutes to go, and yet again failing to pick up their first win of the season. Sassuolo will be delighted that they managed to overcome a two-goal deficit so late in the game, but De Zerbi will certainly be concerned by his side’s vulnerability in defence, especially their vulnerability from long balls. They will need to improve quickly with games against Napoli and Inter on the near horizon.

Waasland-Beveren welcomed Royal Excel Mouscron to East Flanders for a relegation dogfight in the Belgian Pro League matchweek 15. Both […]

In the final round of the group stage matches, Dutch champions Ajax took on an inspired Atalanta outfit for a […]

Serie A champions Juventus faced off against league strugglers Atalanta on Wednesday evening, with both sides hoping to pick up […]