Atalanta began their Serie A campaign for the 2020/21 season with a resounding win against Torino last Saturday. The game finished 4-2 to the visitors despite being behind early in the game to an eleventh minute Torino goal.

This was a tough game for Atalanta as Il Toro were beginning to find their feet under new manager, Marco Giampaolo, with the game tight at 3-2 to La Dea going into the break. However, as always under Gian Piero Gasperini, they showed a cutting edge to win the second half one nil, giving them a 4-2 win and a perfect start to the new season.

Giampaolo will be increasingly worried now that his side have picked up their second loss from two games so far, albeit against two very difficult sides in Fiorentina and Atalanta. When he was the manager of Milan last season, a poor start to the season saw him lose his job very early in the campaign. Despite the fact that he must try and change their entire style of play in a short space of time, if he does not start putting points on the board, he may find himself meeting a similar fate to last year.

This article will be a tactical analysis of Atalanta’s win over Torino. It will be an in-depth analysis of the strengths and weaknesses of both sides in their tactics, throughout the game, as well as taking a look at where each team could have improved in their set-up. 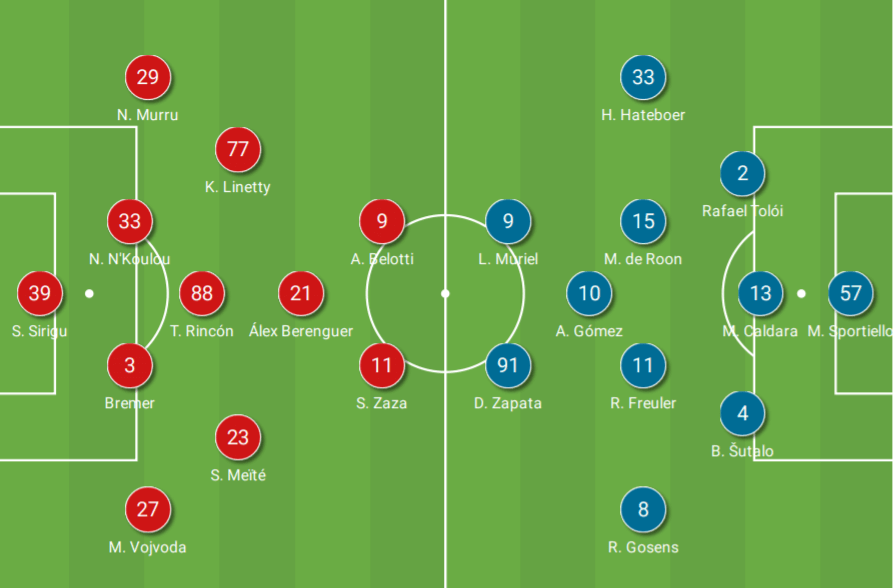 For Torino, there were very few changes from the narrow loss against Fiorentina on the opening day of the season. The formation was the 4-3-1-2 system deployed by Giampaolo last weekend and at every club he has previously worked at.

The only two changes of note were Mergin Vojvoda, who is a new summer signing for Torino, in place of Armando Izzo, the Italian centre-back who was deployed as a right-back last week in which he struggled there. The other change was for another new signing, Nicolai Murru, started in place of Christian Ansaldi.

For Atalanta, Gasperini stuck to their usual 3-4-1-2 formation for this game. A formation they are very well-drilled and experienced in and one which he will continue to deploy as it suits the players currently at his disposal.

Like Torino, they only made two changes from their last competitive match in all competitions, which was the Champions League quarter-final. Mario Pasalic started up front for Atalanta against PSG but took a backseat on the bench against Torino in place of Luis Muriel. Berat Djimsiti was the other change due to his suspension, with youngster Bosko Sutalo starting as the left centre-back.

Giampaolo’s Torino are under-going a massive overhaul at the moment in terms of the change in their style of play. Giampaolo wants his side to be more progressive in possession but also more patient. Torino rarely played out from the back under previous managers and mainly opted for long passes up to their centre-forwards. However, under the new manager, they build out from the goalkeeper from every goal-kick. This is a work in progress currently and the players will need a lot more experience and practice but at the moment, they are struggling massively in the build-up phase.

Against Fiorentina, Torino struggled to play out from the back and were forced into making errors turning over possession. The match on Saturday was no different, predominantly because of Atalanta’s high press.

Their defensive shape whilst Torino had the ball in the build-up phase of play was a 3-4-1-2 high block, which is their base formation. Gasperini deployed a very strict, very tight man-marking system out of possession throughout the match. 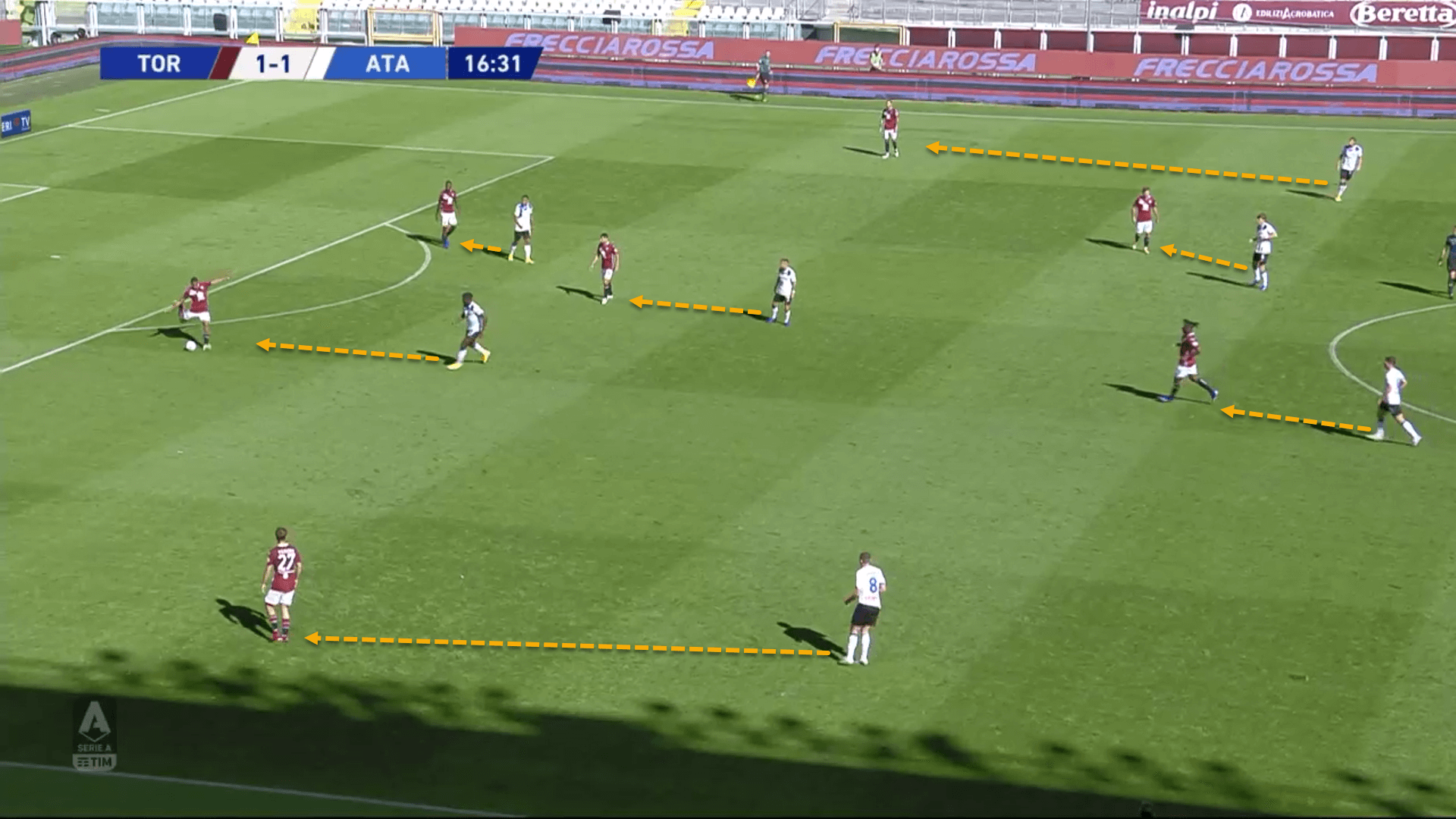 The image above portrays Atalanta’s high pressing, man-to-man marking system whilst Torino were trying to play out from the back. Atalanta would let the ball receiver have a bit of space to control the ball in order to entice Torino to play it to them. Once he received the ball, his marker would quickly close him down in order to force him to play either backwards or long.

To ensure that Il Toro would play long, the other Atalanta players would tightly mark Torino’s ball-near passing options. This prevented them from being able to play short. Twelve percent of Torino’s 415 total passes in this game were from long balls with 53 long passes being played by them.

The high press against Torino can be seen again here; 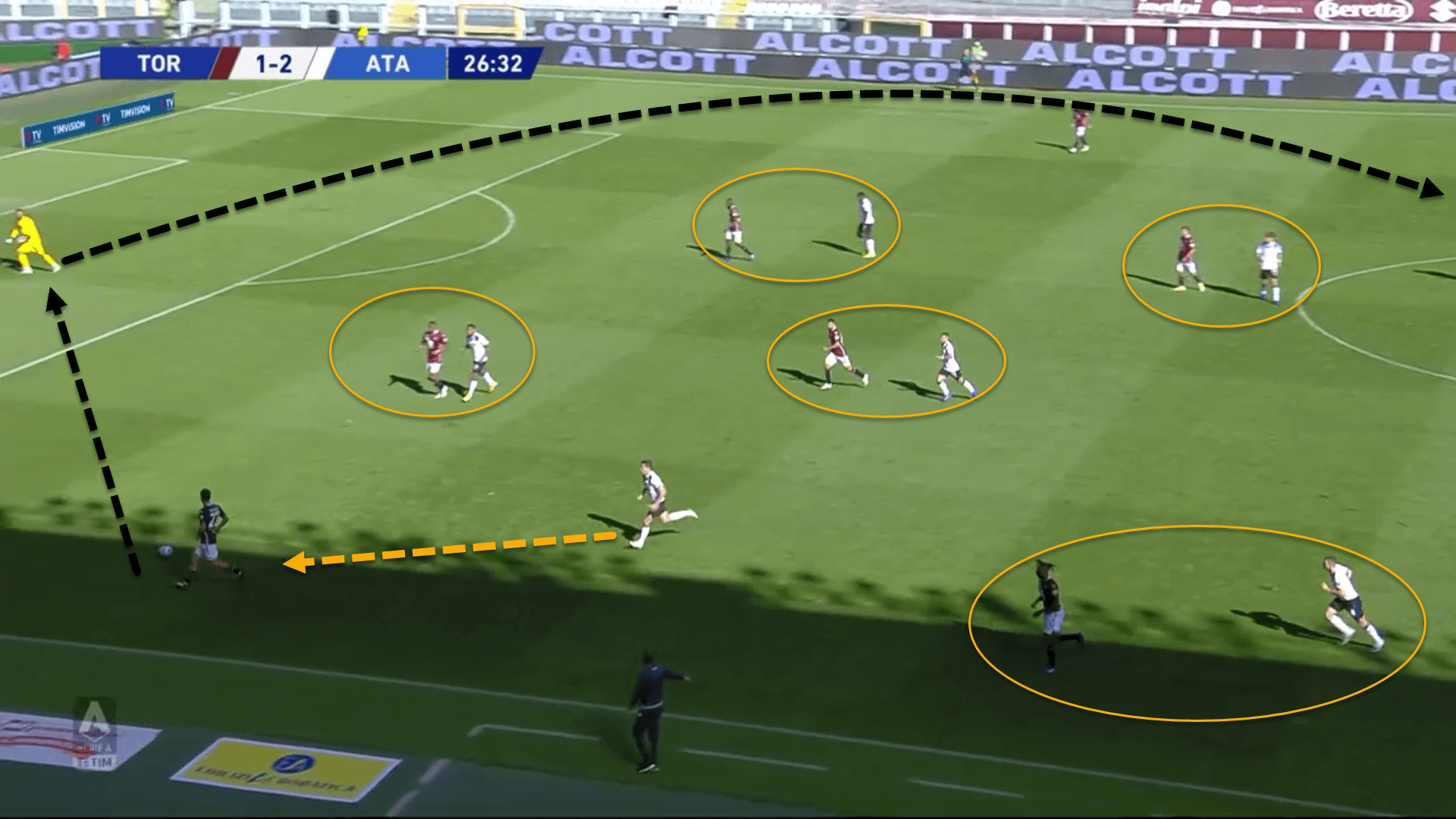 As you can see here, Atalanta mainly tried to angle their runs in order to force the home side to play into the fullbacks. Once the ball was with the fullbacks it was easier for La Dea to box them in and cut off the central areas, also forcing Torino long.

Atalanta are one of the most exciting teams in Italy if not in Europe. However, last season in the Serie A, Atalanta conceded the most goals in the top-four with forty-eight goals against them. Defensively they can struggle at times if the opposition try to play through passes in behind their backline.

Giampaolo’s men managed to expose this weakness time and time again on Saturday, which caused Atalanta to concede two goals from open play. The most notable exploitation of Atalanta’s recklessness in defence was the opening goal of the game when Belotti was played in behind Atalanta’s defence before slotting into the corner. 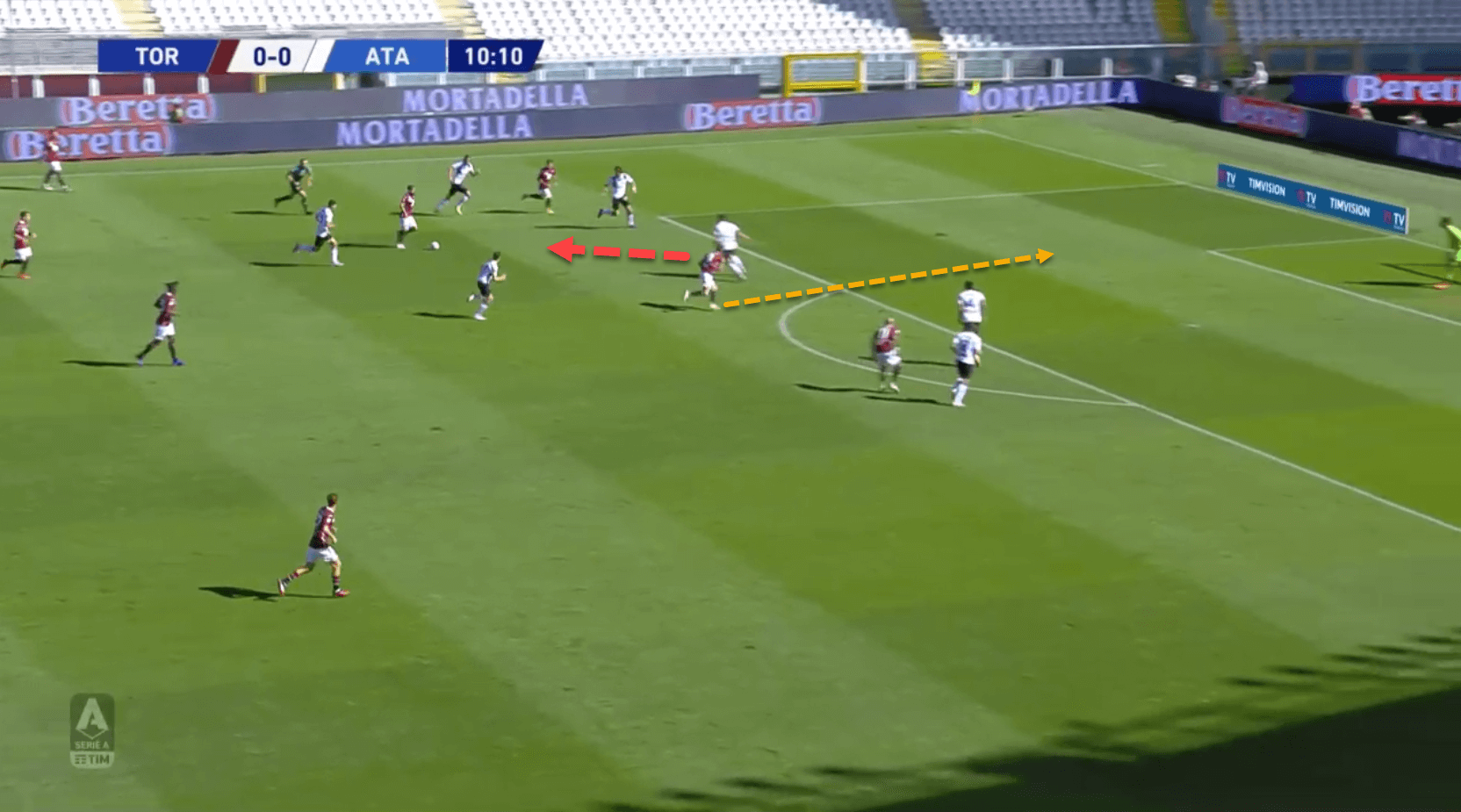 This footage above was the passage of play that led to this goal. Mattia Caldara spotted Rincon driving towards the box and aggressively pressed him to close him down. He did not check his shoulder for Belotti’s run and this cost them by conceding the first goal. These lapses of concentration and moments of recklessness causes Atalanta to concede sloppy goals and even costs them points. 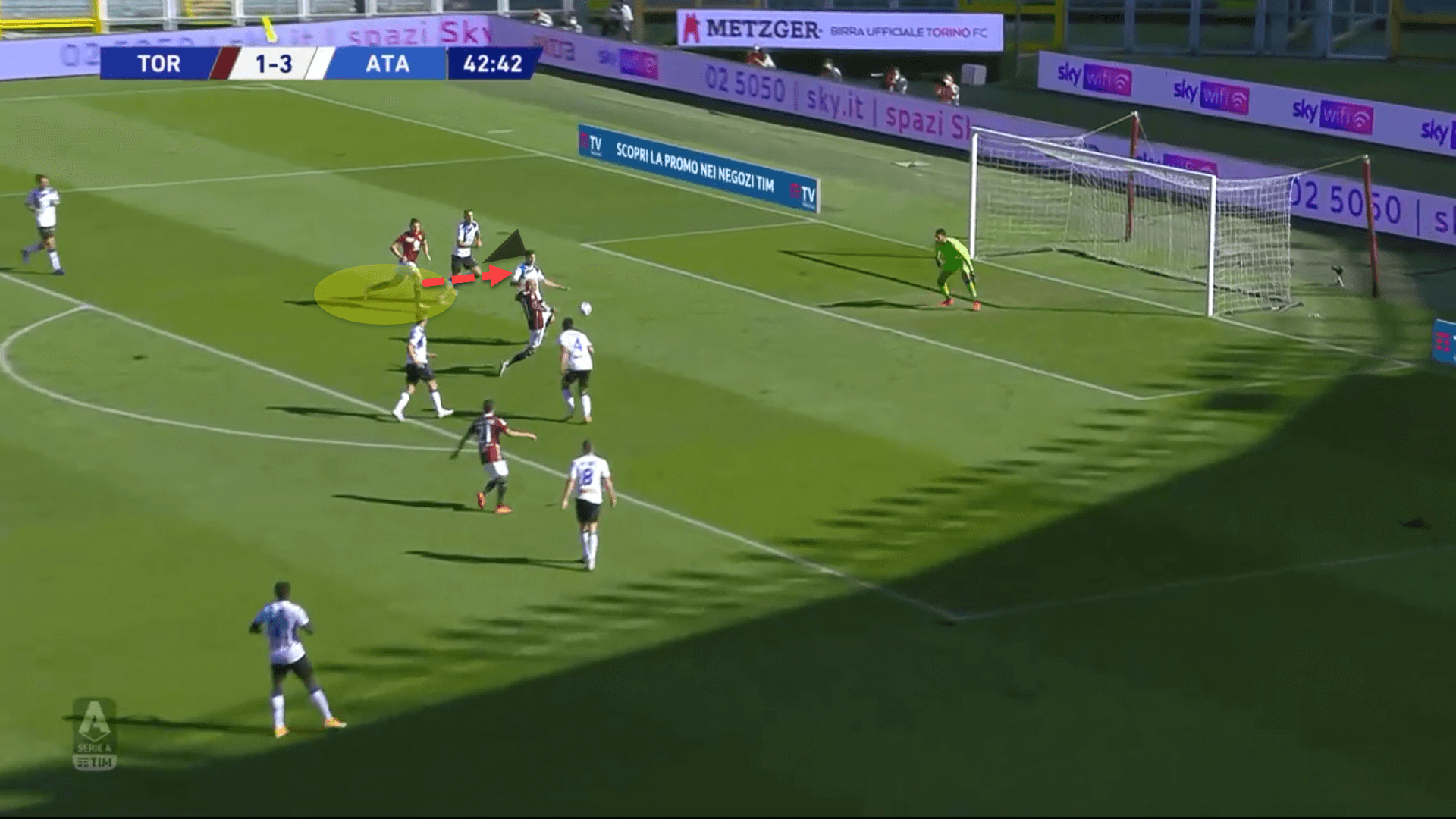 For Torino’s second goal above, Vojvoda played an inswinging cross in behind Atalanta, to the blindside of Caldara for Belotti to run into and score. This was a constant threat for Torino in the match despite not scoring from more than two of these situations. It was very clearly a tactical ploy by Giampaolo, and Torino managed to have 11 of their 28 attacks down the middle. 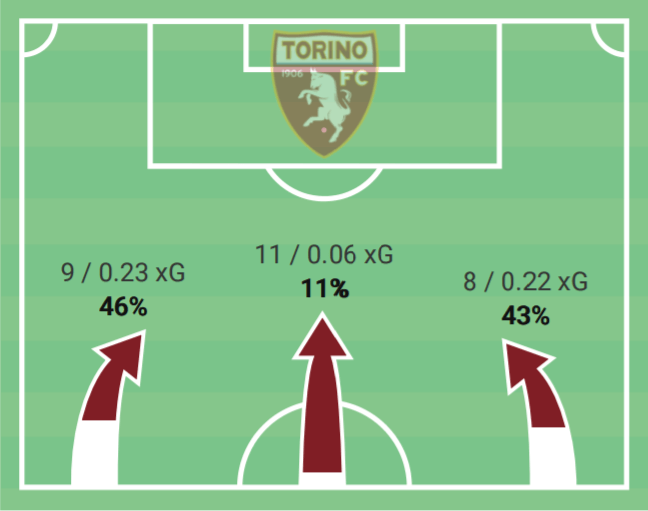 Atalanta’s use of the wide areas:

Atalanta under Gasperini, are a side who like to create overloads in the wide areas, in order to play through the opposition’s defence. 38 of their 49 attacks were on the flanks. 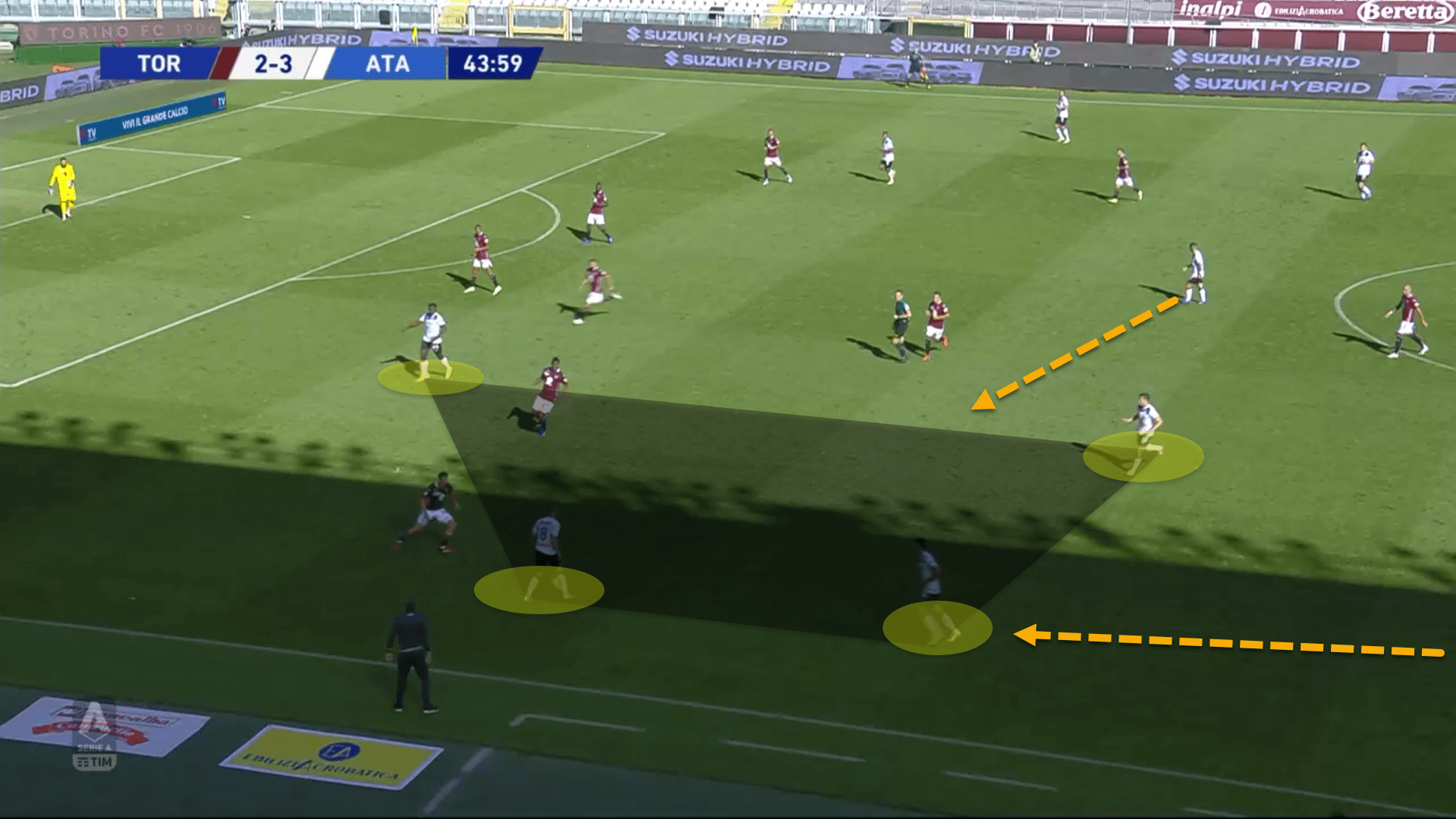 Atalanta’s left centre-back has pushed up into the middle third in order to create a 4v2 overload on the flank. If the centre-back is pinned back and cannot push forward, then Alejandro Gomez, as the attacking midfielder, will drift wide and create this 4v2 overload.

This overload worked incredibly well against Torino and La Dea created a vast amount of chances, particularly on the left flank in which they had a danger level of 53 percent from their attacks on this side. 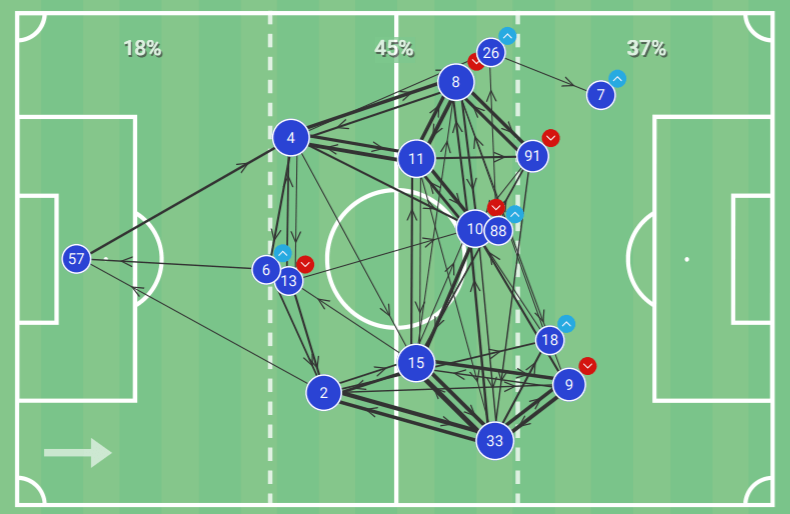 This pass network above shows that Atalanta’s most used passing combinations in this game were from the flanks with the players used in their overload.

As Atalanta overloaded the wide areas, it forced Torino to shift their entire defensive block over to the ball-side. This was to try and make it difficult for Atalanta to break their defensive line. However, the problem this caused was that it left a lot of space on the opposite flank for a switch of play.

Gasperini’s men are excellent at switching the play and so this played into their hands, creating numerous chances from the underload on the far-side. 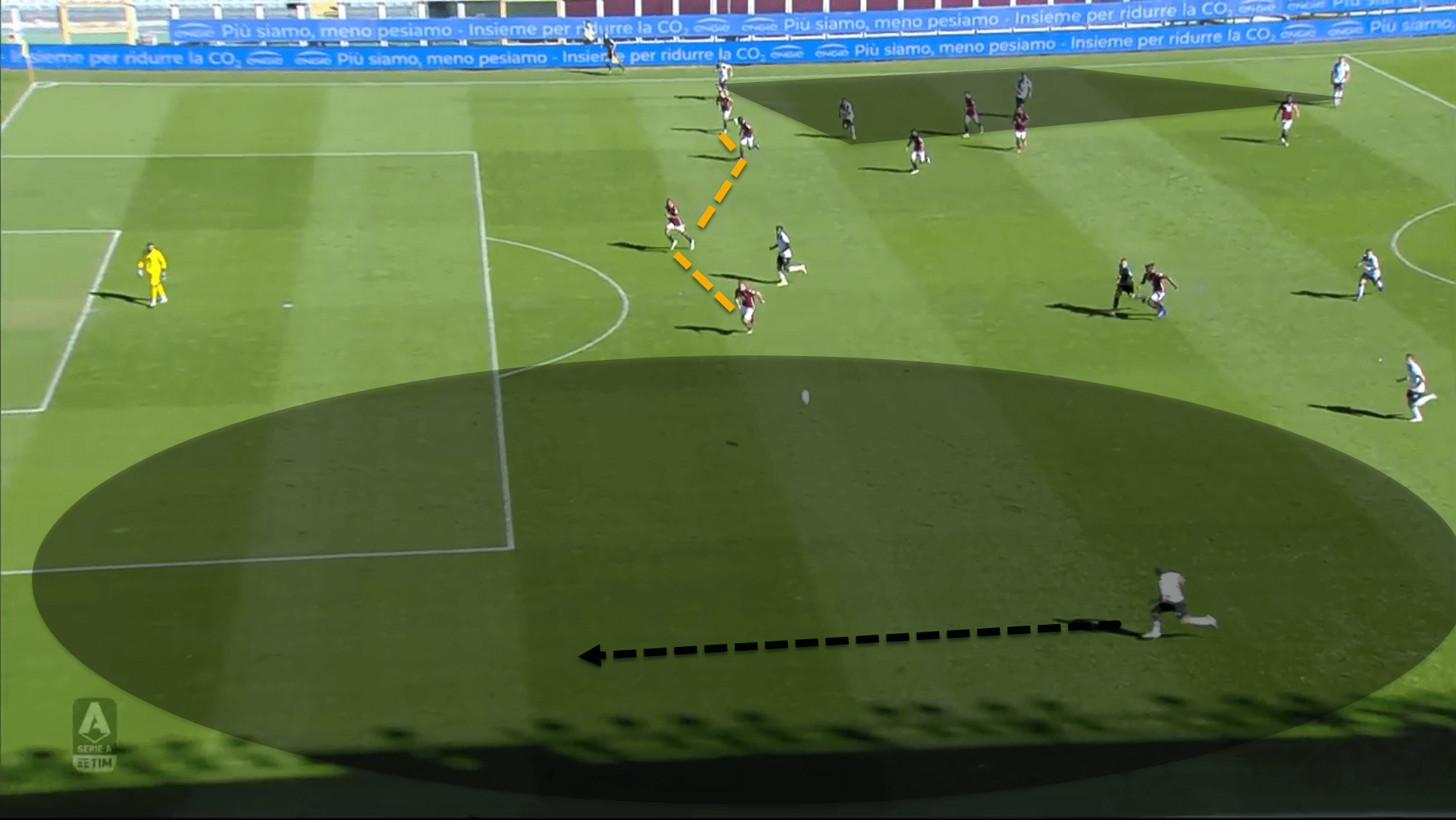 The wing-back would delay his run before darting up the wing on the blind-side of the nearest Torino defender. Once the ball was played to him, he had plenty of time and space to pick out a good cross to one of the centre-forwards.

The use of the split strikers:

Gasperini deployed split strikers in this match. This means that the two centre-forwards would pick up positions between the opposition’s fullbacks and centre-backs. It made it easier for Atalanta to overload the flanks as they knew they already had a centre-forward to create a numerical advantage with.

However, it was also really useful to double up on Torino’s fullbacks with two players. These two players were always the ball-far wingback and ball-far centre-forward. Countless times against Torino, Atalanta used this numerical advantage at the far post to create chances, scoring on one occasion. 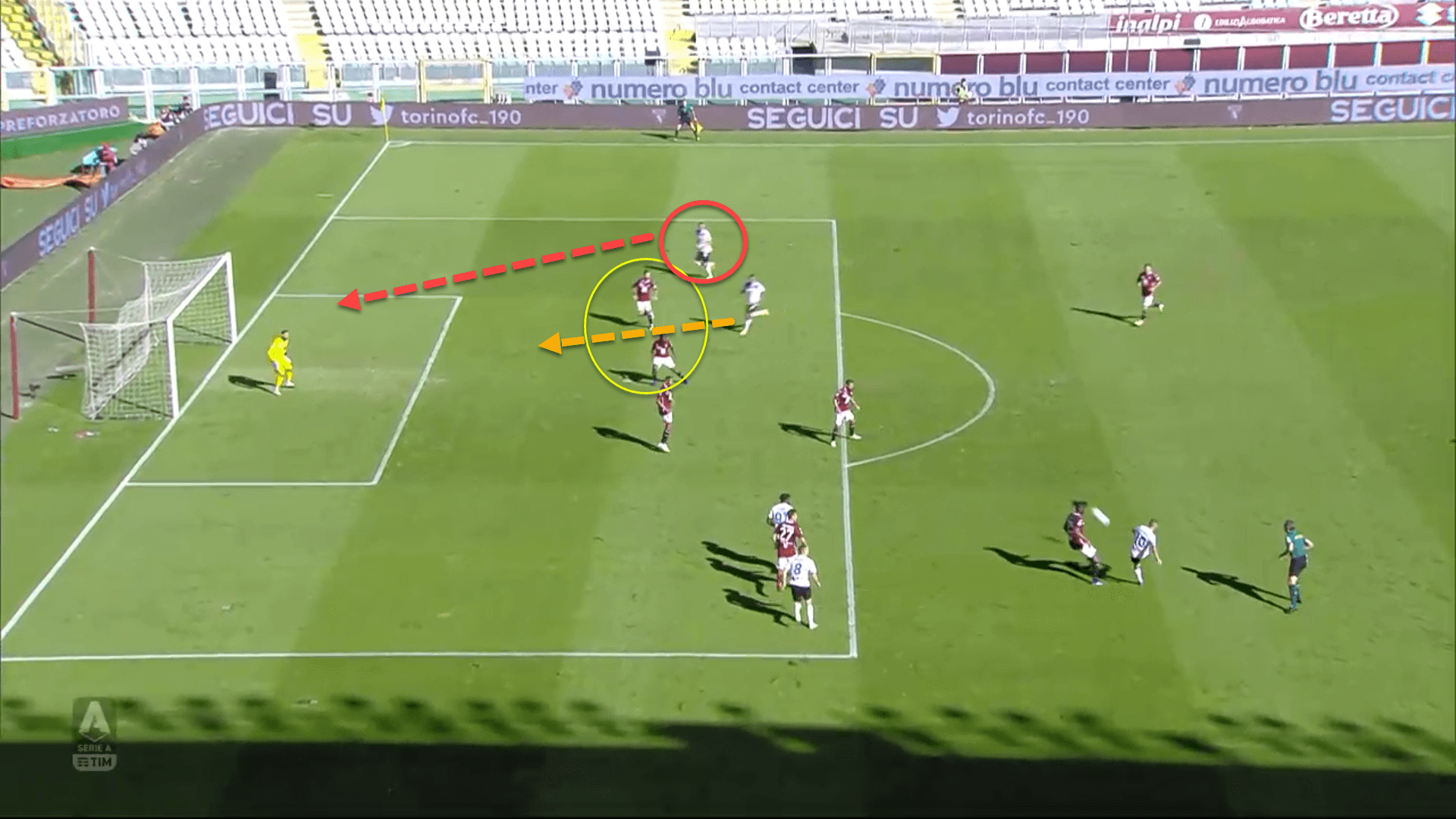 The footage above is an example of this numerical advantage at the back-post, which led to the third goal by Hans Hateboer. As Torino don’t have any wingers to come back and pick up the opposition wingbacks, it was very easy for Atalanta to have a free man at the far-post.

Muriel positioned himself between the fullback and centre-back and made a run in between them from the cross. The left-back for Torino, Murru, was forced to pick up Muriel to stop him from scoring, and when this occurred, Hateboer made a late run behind the fullback on his blindside to finish into the left-hand corner.

Duvan Zapata would perform this same move on the left-side too with Gosens at the fullback’s blindside. This can also be seen in the above image.

The positioning of the centre-forwards between the fullback and centre-back was not just during crosses though. They would also attack the depth of the pitch from these positions. This was because it stretched the Torino backline and gave the centre-forwards more room to run through. Atalanta’s second goal came from this exact move. 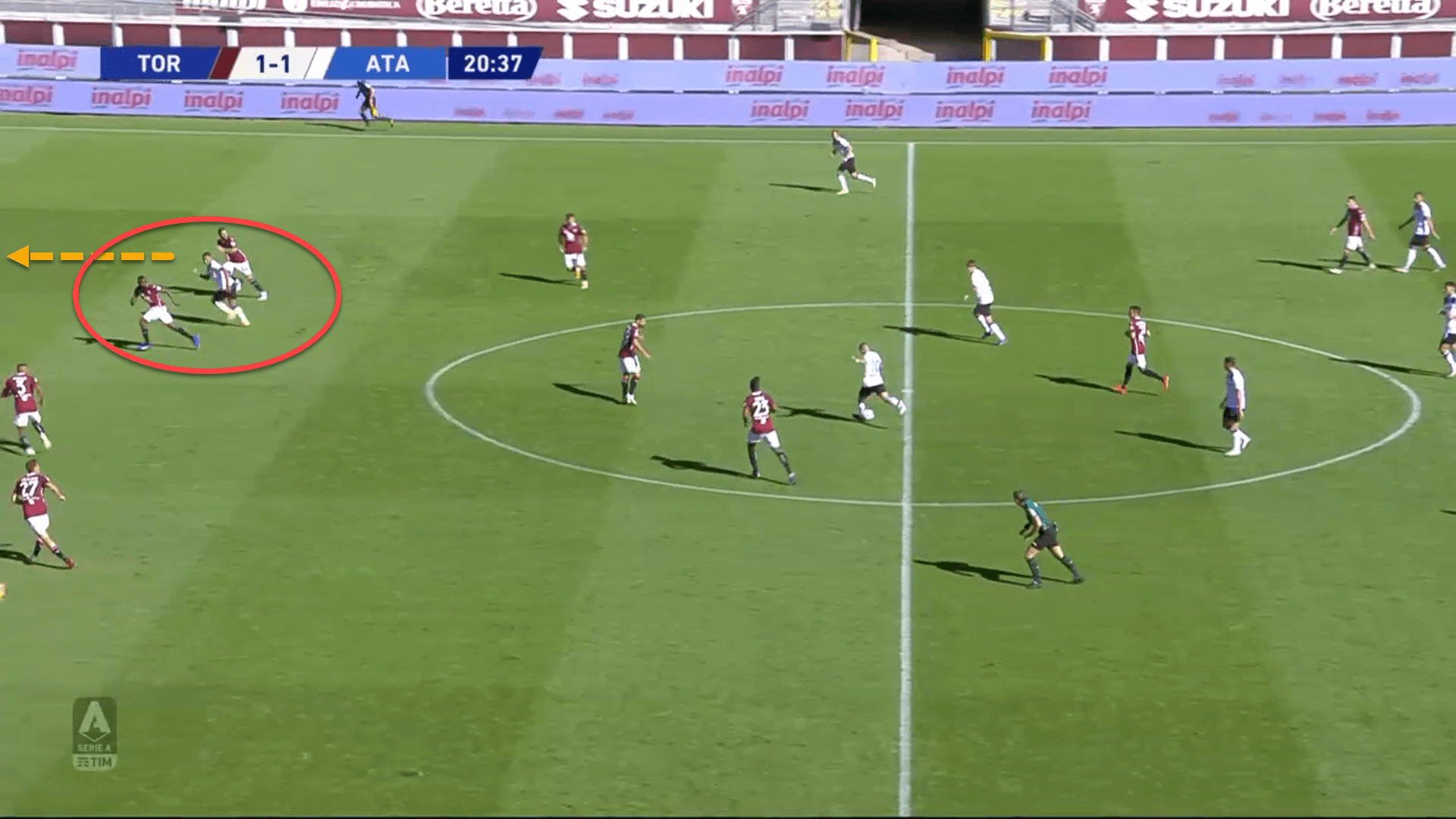 As both Zapata and Muriel are very fast, they could get on the end of the balls over the top of the defensive line very easily.

Atalanta started off very slow to this game, mainly because it was their first game back in competitive football since the Champions League quarter-final. However, they quickly grew into the game after they went one-nil down. By the final whistle they were 4-2 victors. The match showed that they will definitely be up there again this season, fighting for the top-four places alongside some excellent teams.

Torino were a different story. They looked very lively in the first half, particularly the eleven minutes up until they scored. Regardless, once Atalanta scored, their heads seemed to drop, and they were well beaten by Gasperini’s side in the end. The main positive sign for them was that they seem to be improving massively going forward. Zaza and Belotti are gelling well together and if Berenguer can start playing well, they will be a very dangerous team up front. Their biggest problem is in defence, and if they keep leaking poor goals like they did against Atalanta, it will be a very long season for Il Toro once again.