Anderlecht hosted Genk in the Belgian Pro League in a fixture which saw the away side’s impressive unbeaten run come to an end. The team from Brussels, led by former Manchester City captain Vincent Kompany, were able to keep the in-form Genk at bay and grab a 1-0 victory. Both sides are two of the bigger teams in Belgium, who, after disappointing seasons last year, are starting to turn things around. 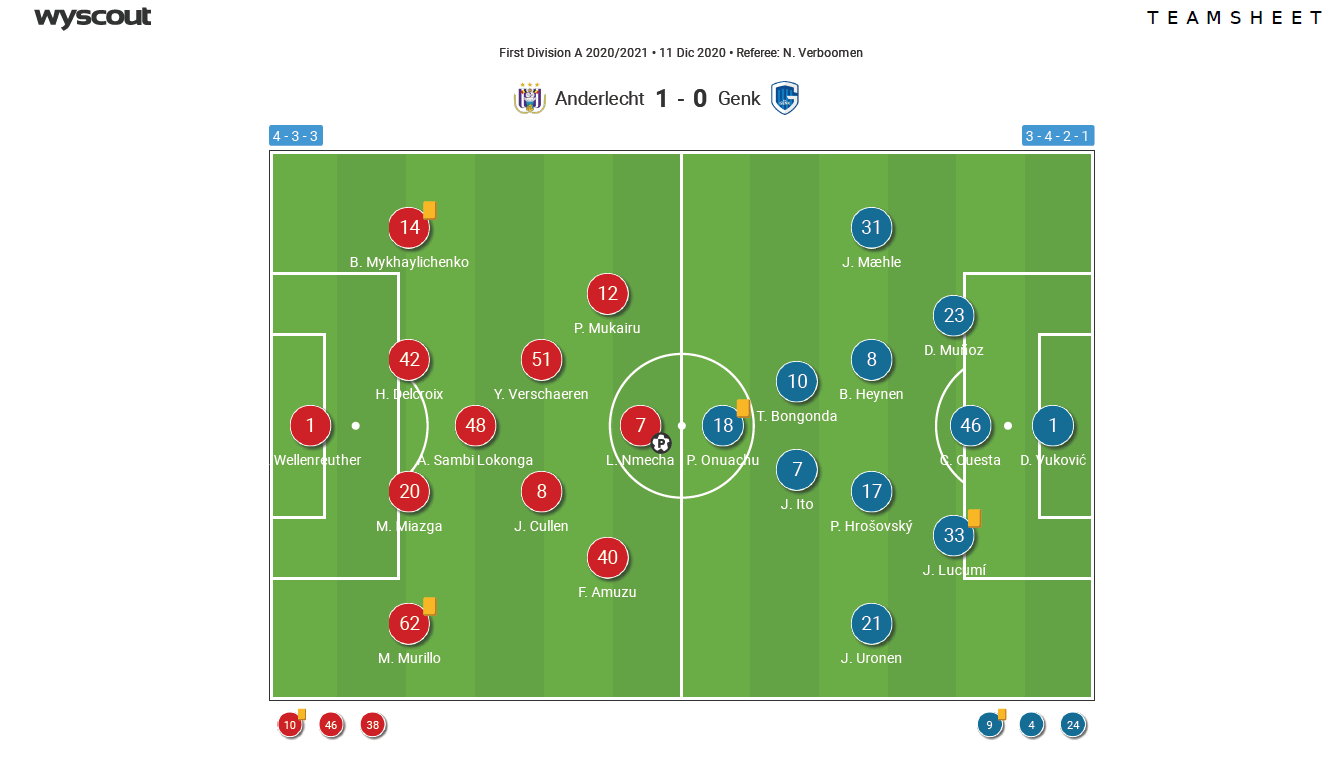 Kompany went with a 4-3-3 formation, starting Timon Wellenruether in goal. Chelsea loanee Matt Miazga partnered Hannes Delcroix in central defence, with Michael Murillo and Bogdan Mykhaylichenko as the full-backs. Josh Cullen and Yari Verschaern were playing just in front of the impressive Sambi Lokonga. Francis Amazu and Paul Mukairu were there to provide width, with Lukas Nmecha as the striker.

John Van Den Brom lined up his Genk side in a 3-4-2-1 formation, with Danny Vukovic in goal as usual. The back three was made up of Jhon Lucumi, Carlos Cuesta and Daniel Munoz. Jere Uronen and Joakim Maehle were the wing-backs, with Patrik Hrosovsky and Bryan Heynen as the central midfield partnership. Junya Ito and Theo Bongonda were further forward, in support of main striker Paul Onuachu.

Over recent matches, the play of Ito and Bongonda has been vital to Genk’s success. Both have contributed goals and assists, and just their all-round play has helped Genk to win matches and score plenty of goals. Therefore, for Anderlecht, limiting their influence and denying them the ball was an important aspect of their victory.

In order to do this, Kompany’s wingers Amazu and Mukairu were clearly given the task of tracking the wing-backs of Genk, Uronen and Maehle. Ito and Bongonda were operating in between the Anderlecht full-backs and centre-backs. One approach that the hosts could have used was to drop Lokonga deeper when defending to make a back three, then allowing the full-backs to pick up Genk’s wing-backs.

Instead, by pulling both Amazu and Mukairu back to mark the wing-backs, it freed up the full-backs of Anderlecht to pick up Bongonda and Ito, meaning that their centre-backs could concentrate on Onuachu and not get overloaded. This would lead to Nmecha at the other end having to concentrate on pressing the back three, but, in order to ensure he wasn’t isolated, one of the central midfielders, either Cullen or Verschaeren, would push on to support the lone striker. This was only possible because Lokonga hadn’t been dropped further back, meaning that he, alongside the non-pressing central midfielder, could match up with the two central midfielders of Genk.

In the example below, we see Nmecha the furthest forward, with Verschaeren closest too him. Lokonga and Cullen are in the middle, while Mukairu has dropped in to stop the wing-back. This has freed up the man behind him, Mykhaylichenko, who can support if one of Bongonda or Ito look to make a run wide. 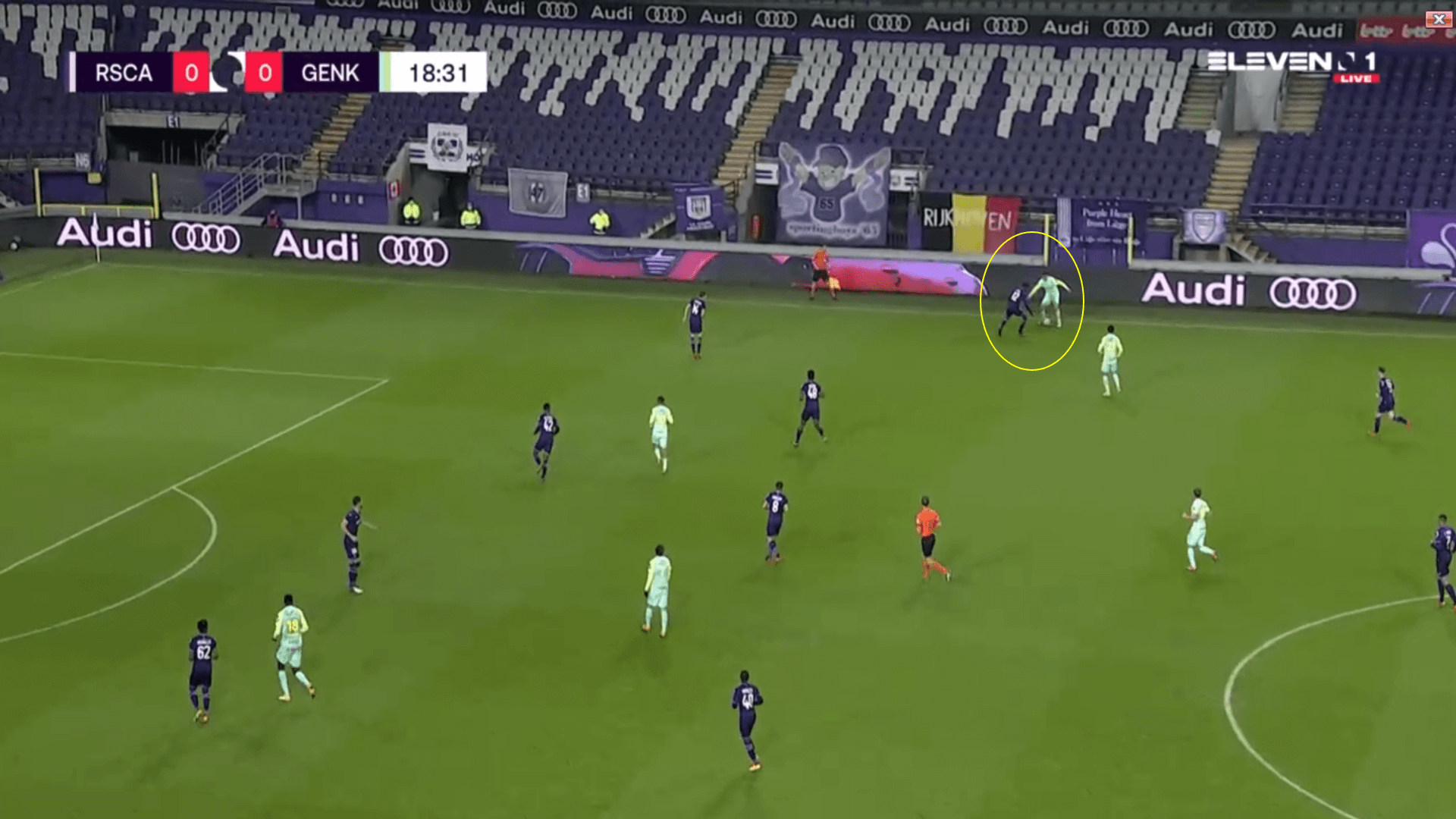 Now, on the other side, we see Amazu doing the same, this time against Uronen. Again, he has allowed Murillo to stay deeper and help out the central areas, should the ball come into Ito or Bongonda, who were operating there. 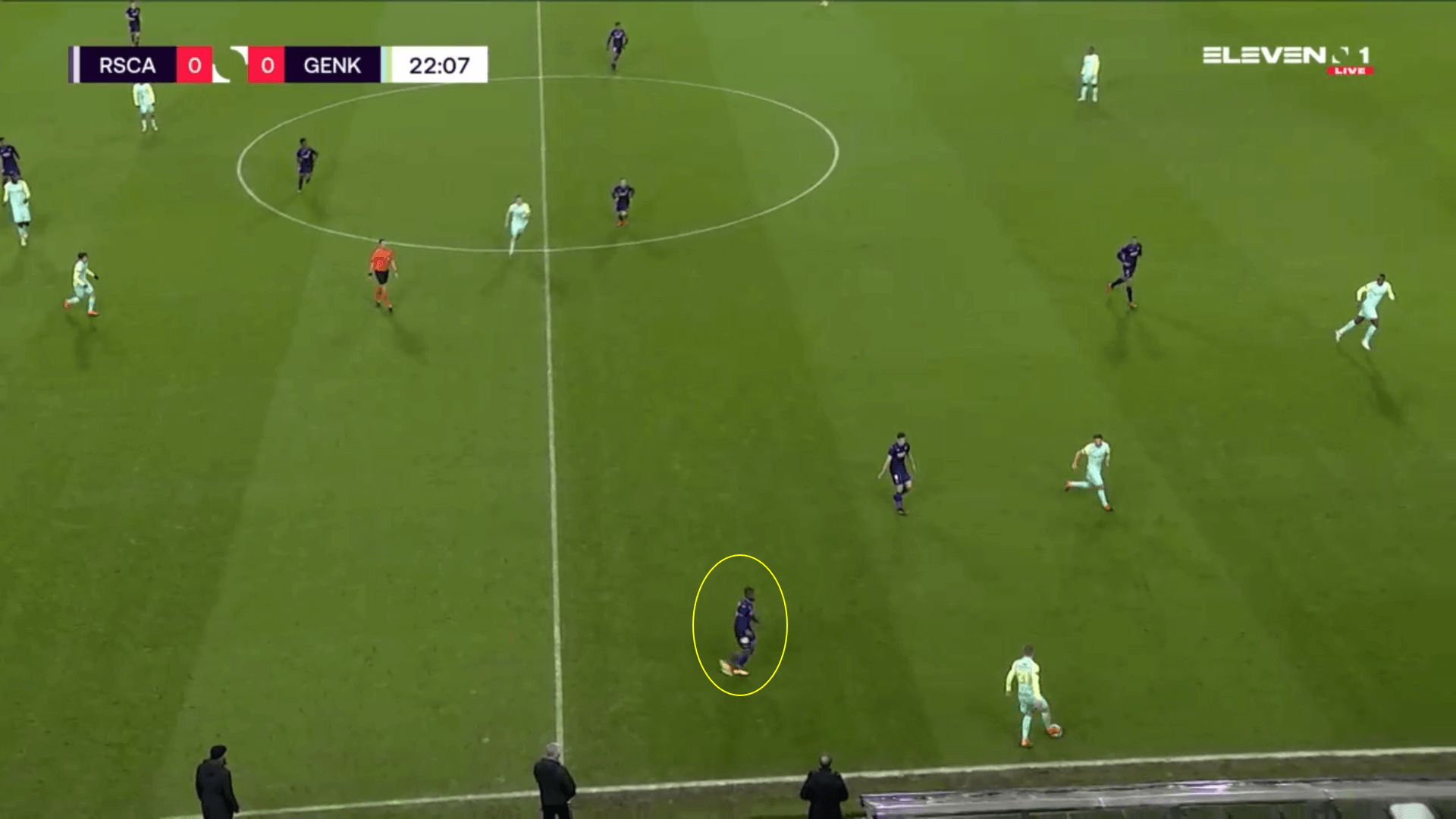 While Genk were still able to make chances, and Ito and Bongonda did get on the ball and stretch Anderlecht’s defence, this tactical setup by Kompany did lessen their impact on the game compared to previous matches, where they had been highly influential.

Throughout the game, Anderlecht had been looking to transition from defence to attack at speed, using their wingers to get them into the attacking third quickly, even whilst asking them to drop in at times to help support the defenders.

They win the ball back from a light press on the Genk defenders, forcing them to go long to Onuachu. When Murillo picks up the ball in the image below, we see that there are only three Genk players forward, so, in order to get through the defence, Anderlecht would either need to play at pace or look to build the attack up more. 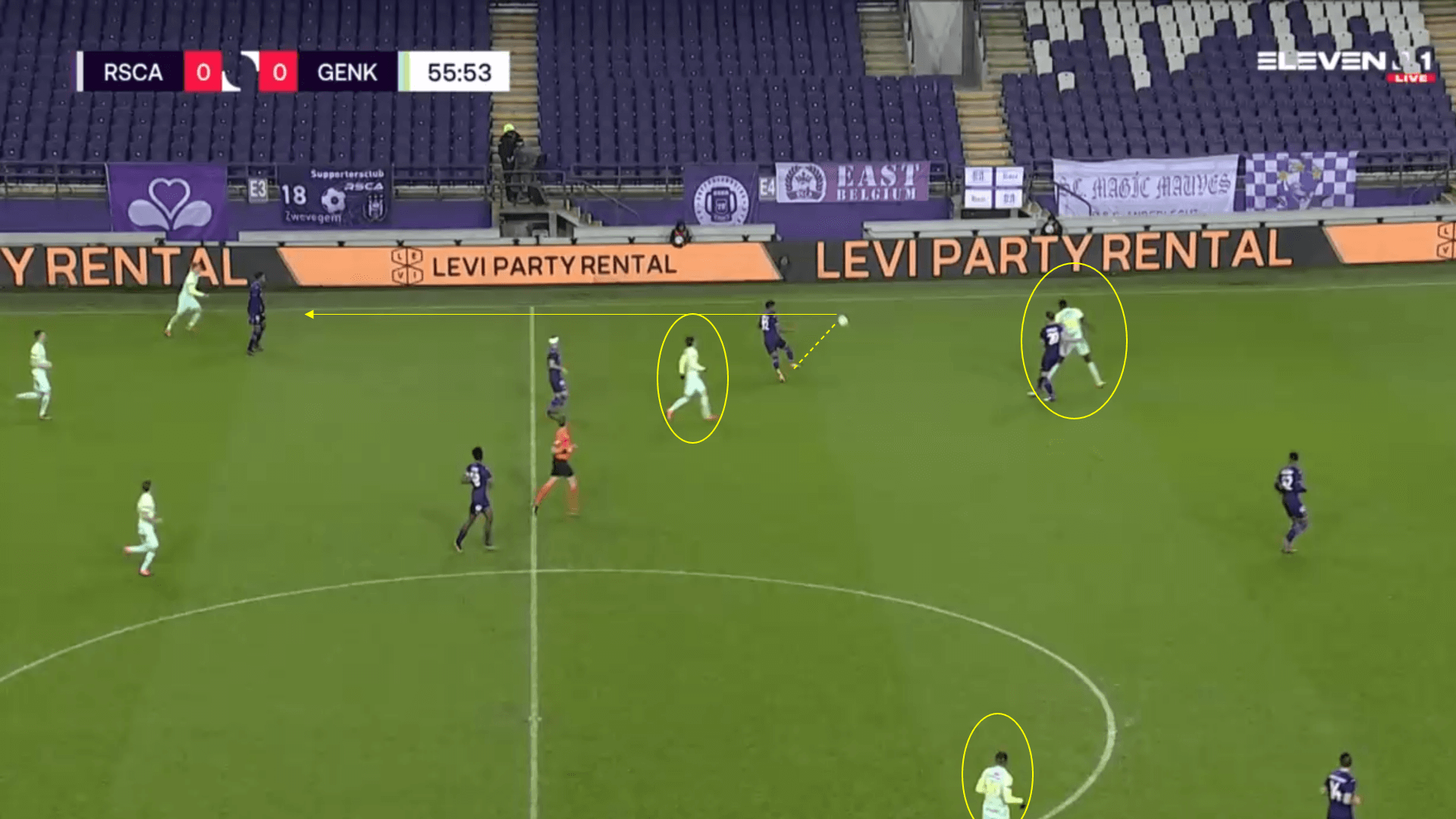 Murillo is able to take two Genk players out of the play with a ball down the line to Amazu. Vlap, who had come on to replace the unfortunately injured Verschaeren, is also forward, having aided Nmecha with the press that was spoken about in the previous section. By playing a quick ball forward to Amazu, Murillo has been able to put Anderlecht into a dangerous position with one pass. 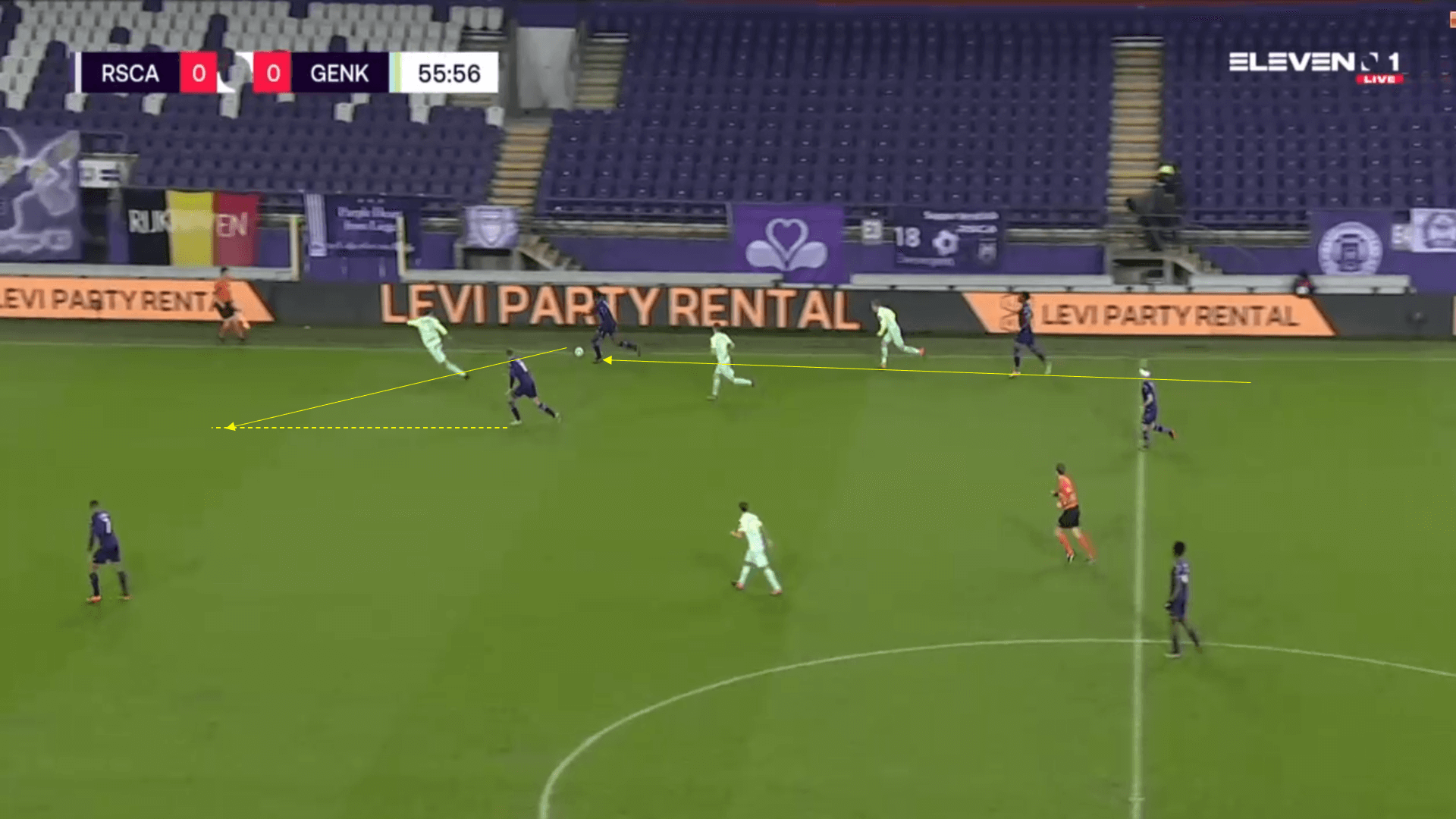 Vlap’s positioning has caught Genk out, and created a gap that Nmecha is able to exploit. Nmecha throughout the game looked to play on the shoulder and exploit any gaps in the back three to run into. This gap means that Munoz is forced to come across to cover. His momentum carries him into Nmecha, who seeing the man coming and takes the contact, winning the penalty. 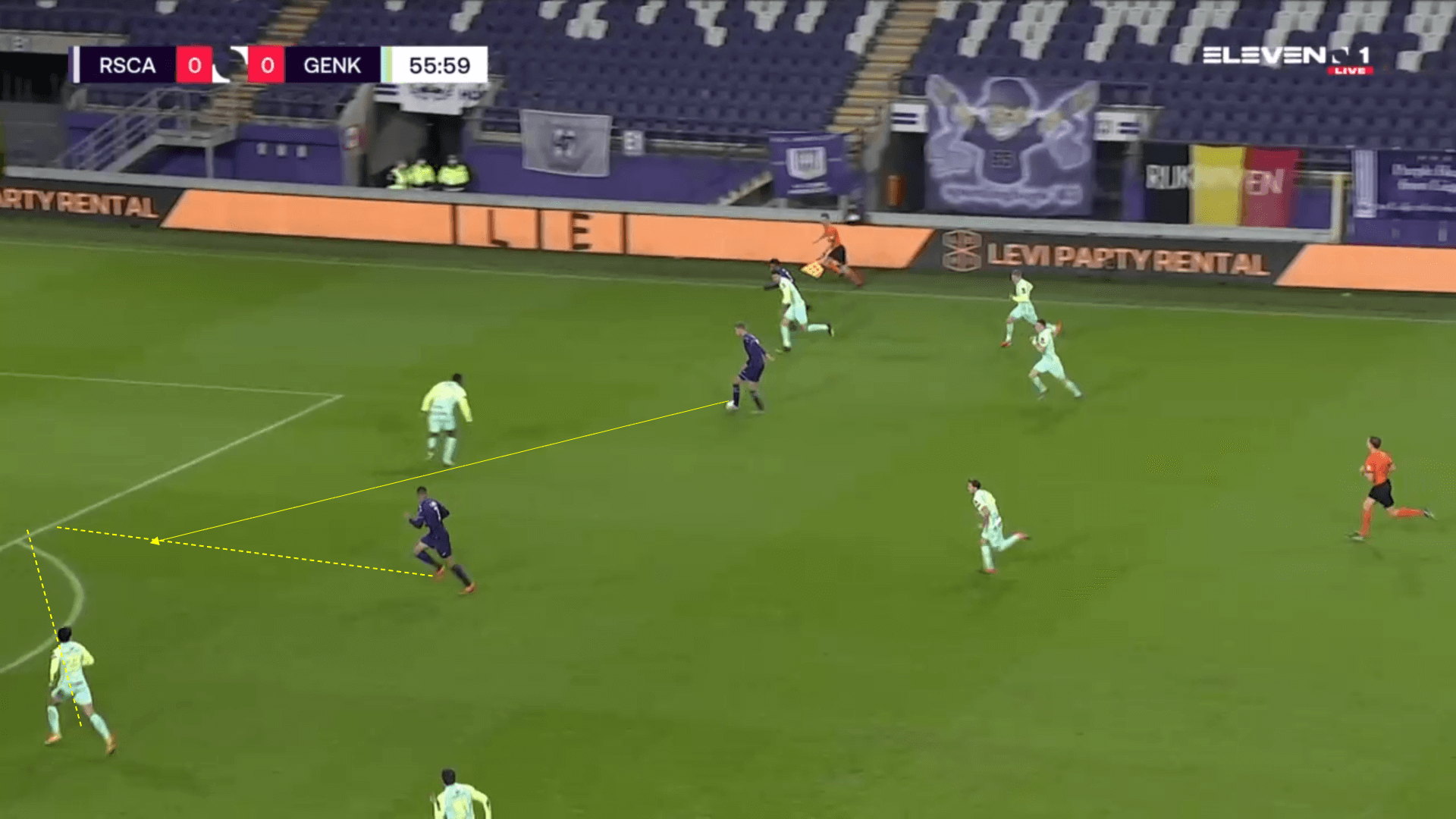 The young striker is able to convert the penalty, which was the result of a well-worked and quick attack from the hosts; something they had been looking for all evening.

Genk had struggled to create chances for Onuachu, as Anderlecht were able to get bodies around the striker to deny him the ball. In the 68th minute, Cyriel Dessers was introduced to play alongside the striker, replacing Hrosovsky. This meant Genk were now playing more of a 4-4-2, converting the back three into a four.

However, this did little to help Genk create more chances. Overall, they managed just four attempts on goal, according to FotMob. Onuachu managed the least touches of any outfield player, and only one attempt on goal. Dessers, in his 20 odd minutes on the pitch, managed no shots on goal, despite the away side managing to have 55% of the ball during the match.

One reason perhaps for this struggle was the job Miazga did in the air against the tall striker Onuachu. Of his nine aerial duels, Onuachu only won three, losing the other six. Miazga, on the other hand, won 80% of his aerial duels. As we see in the image below, Genk have gone direct, and have players up alongside the striker. If he is able to find the player to the left of him, there is a chance that the overlapping playing further wide could cause an overload. 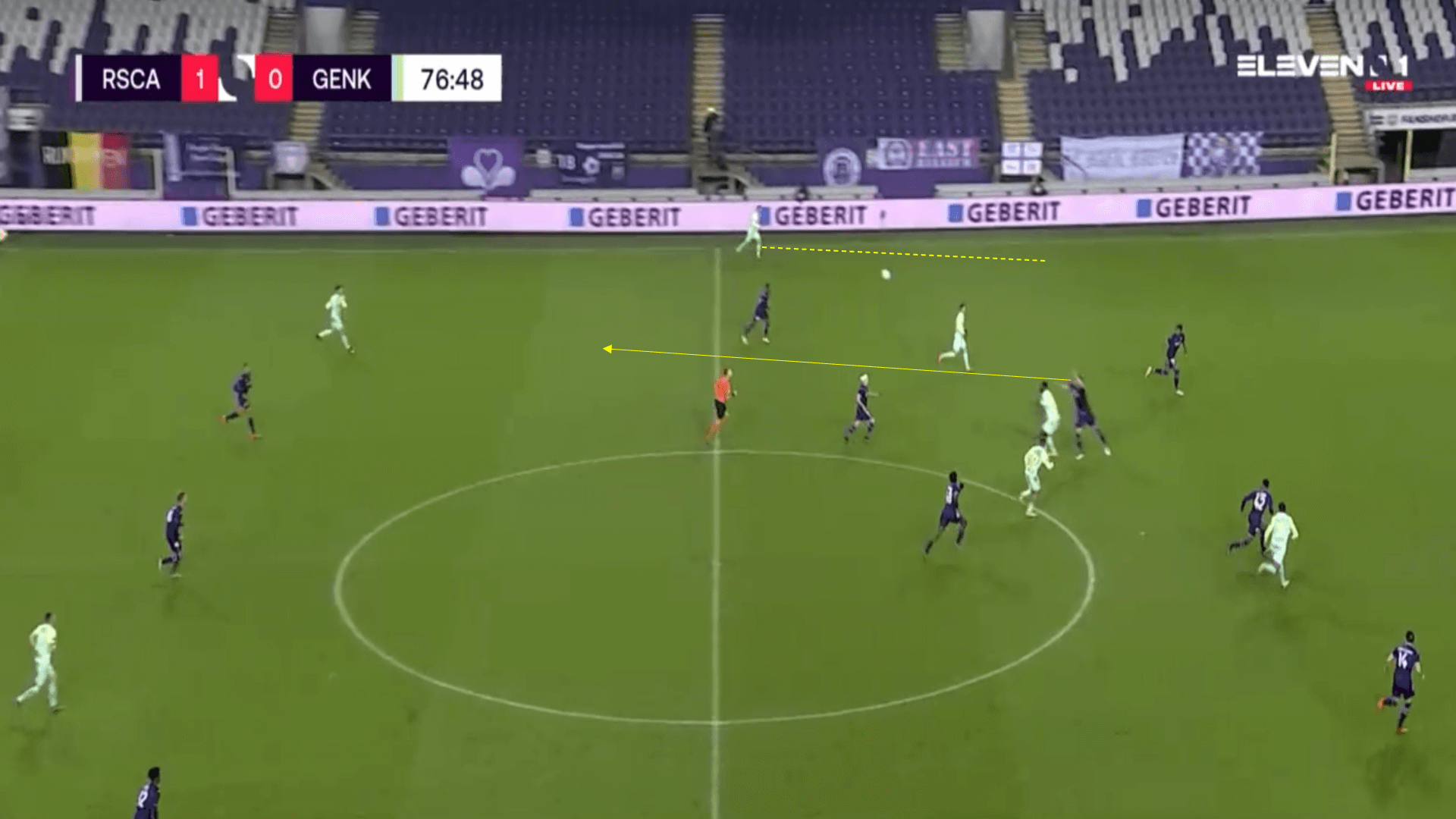 However, Miazga wins the header, which wins the ball back for Anderlecht, and allows them to transition from defence to attack. With two upfront, you would expect Genk to go more direct, as they needed to get the ball forward quicker and bring their strikers into play. This is especially the case when we consider that Anderlecht were not looking to press Genk as much since going ahead. Instead, they looked to sit back and limit the spaces for Genk to play into. This forced Genk into going more direct as a way of getting the ball into the final third without having to try and play through the narrow spaces. As we see below, the entire Anderlecht team is in their own half. 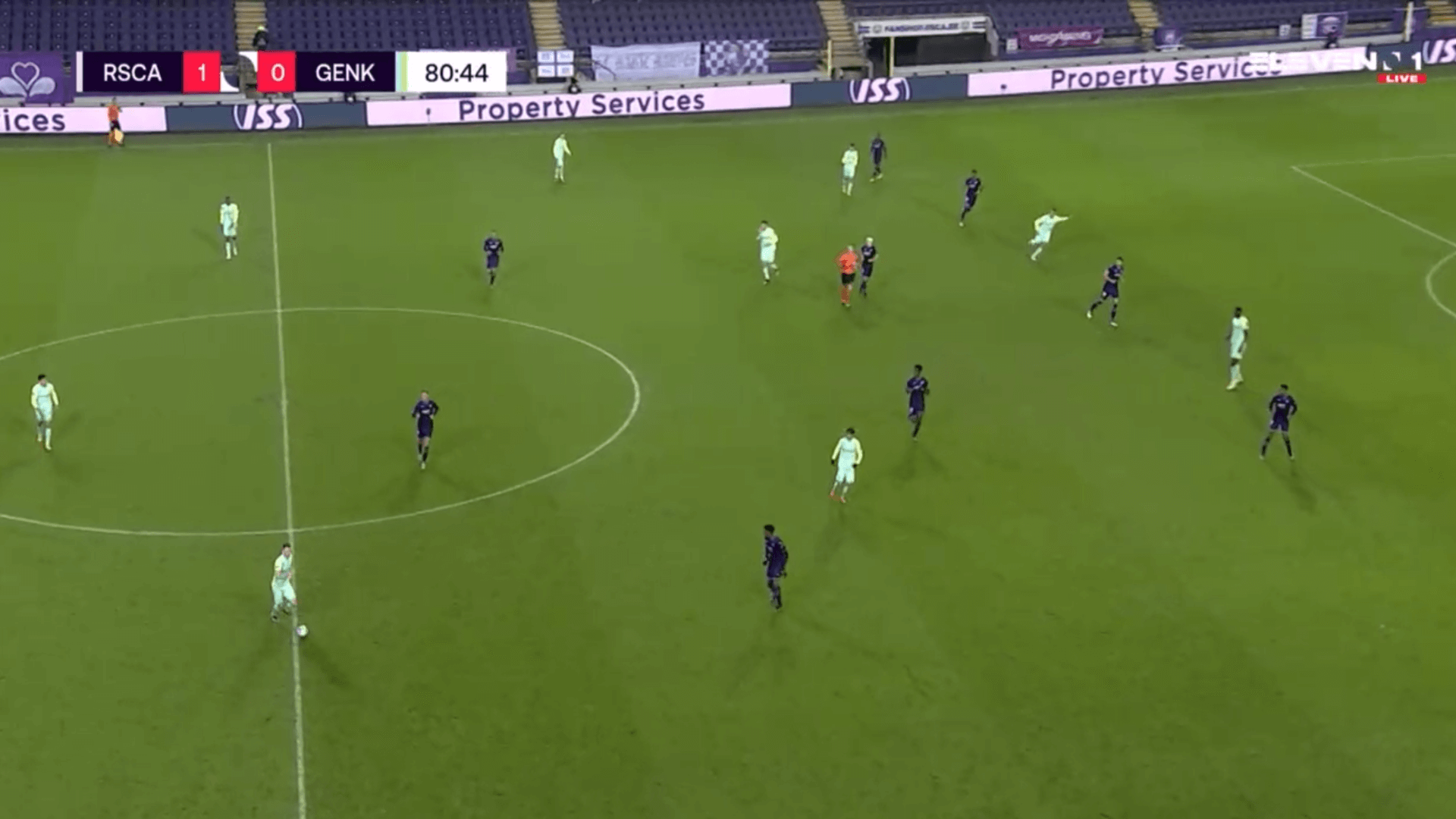 In the end, it was surprising to see Genk, a side who had been scoring plenty of goals this season, struggle to create chances. Anderlecht, meanwhile, can take plenty away from how well they were able to stifle the opposition during the game.

In the end it was a huge win for Anderlecht against the league’s in-form side. They will certainly be happy with the clean sheet and how well they were able to minimalise the impact of Genk’s dangerous attacking players. Genk, on the other hand, will be disappointed that their run ended in such a way.