Barcelona has not performed well this season, and Levante is also ranked at the delegation zone. They both struggle to get good results they desire. In this match, Barcelona finally won with the scoreline of 1-0 and controlled most of the possession. Nevertheless, Barcelona still have a lot to work on in the future. 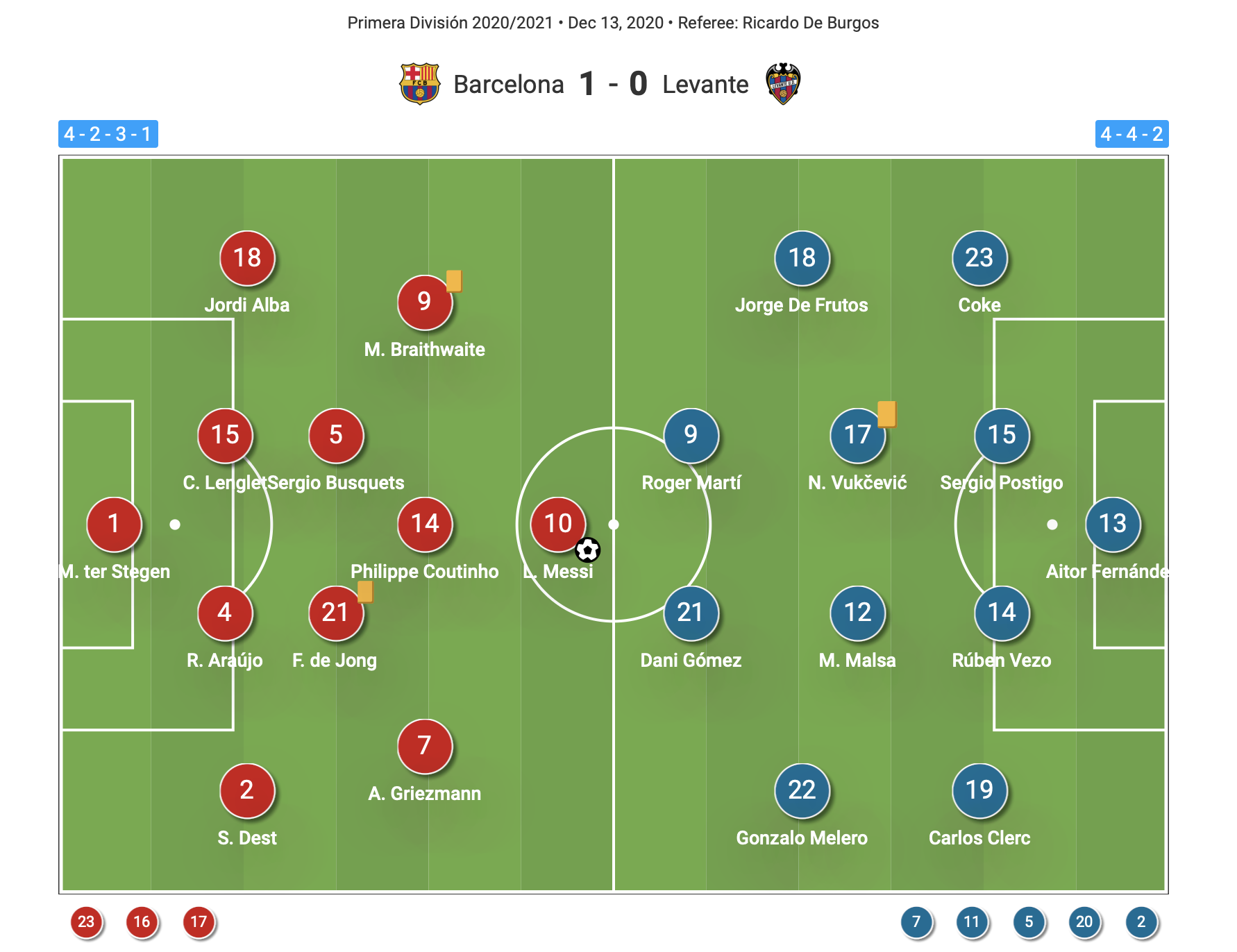 Though Barcelona won this match eventually, Levante actually posed some great threat to Barcelona. Levante did not share the majority of possession in the match (37%); their possession was effective in each stage of the attack.

Levante deployed a 1-4-4-2 system to break Barcelona’s 1-4-1-4-1 defensive block. What Levante focused on progressing and penetrating spaces was to manipulate Barcelona’s single pivot Busquets’ lack of coverage in the midfield as the other two midfielders De Jong and Coutinho were more engaging Levante’s two pivots and not active in doubling-up/ chasing-back when penetrated.

Levante took advantage of the lacking of width in holding area by utilising a mobile winger to go inside from the width or a striker to drop between lines, but mostly a running winger ran diagonally to the space between lines would be optimal as a diagonal run was likely to generate the scenario of receiver facing towards the opponent’s goal with his first touch. However, a dropping player needs a third player to activate the status of facing forwards since he is not likely to face forwards with his first touch.

Also, to deteriorate Barcelona’s midfield defending, in the first stage of the attack, Levante would patiently build out from the back under pressure. They instigated Barcelona’s front players to press their defenders, especially moving one of the midfielders to press a centre-back. On this occasion, if De Jong or Coutinho pressed, Busquets would step to protect the space that was vacated by the stepping, marking/ matching-up with a Levante’s midfielder. However, if Busquets stepped out, the spaces between lines would be exposed to a larger extend. The cutting-in player would have more time and space on the ball when he latched onto the ball.

Above is an example of the aforementioned tactics. In this scenario, Griezmann and De Jong switched their position. Griezmann was the temporary midfielder. Levante’s centre-back-duo circulated the ball laterally intending to move one of Barcelona’s midfielders to step. They succeeded in doing so while Vezo was on the ball as Griezmann pressed and left his matchup Malsa. On this occasion, Busquets also stepped to take the responsibility of marking Malsa and protecting the space. Nevertheless, the space between lines largened and the right-winger de Frutos ran diagonally from the side to find a lane to receive. He faced forwards with his first touch and brought the play into the final stages facing only a line of defenders.

As we’ve mentioned above, Barcelona suffered from the deployment of a single pivot as the runner was untracked. To prevent this from happening, the centre-back Lenglet frequently stepped out to track the runner, while vacated the space in the defensive line. When this movement happened, this cued one of Levante’s strikers to run to exploit the space. This was effective to create finishing opportunities for Levante.

In fact, moving the centre-back Lenglet out of position was the main way to create chances in final stages as he was prompt to track his matchup and left the space in the defensive line. Thus, the striker on his side Gómez would drop to entice Lenglet to move out of position. Then the other striker Martí or a winger would run to exploit that space to gain a finishing opportunity.

The image above manifested how this pattern was applied to the game. Gómez dropped to the midfield and Lenglet stepped to track. The other three defenders dropped a bit diagonally to maintain the compactness of the defensive line. Then the ball was delivered to Gómez who pick a third player with his one-touch pass. At this moment the other striker ran diagonally into the space to receive the ball from the third player. Then he progressed the ball with defenders chasing from behind and finished a shot.

Barcelona had more possession in this match and controlled the game through their possession. They employed a 1-3-4-3 offensive system. One of the most common patterns to create chances was to generate numeral superiority scenario in some small areas on the flank. This was done by a winger dropped to overload a small area, creating a 3v2 scenario and the aim of it was to let the midfielder face forwards generated by the numeral advantage.

The logic behind the dropping winger was that if the opposition full-back did not track, the 3v2 scenario would be created and the status of a midfielder facing forwards in the centre. If the full-back tracked the winger, the space behind full-back would be conceded, and one of the players on the flank-unit would run to exploit it.

From the image above we could spot that the left-winger Braithwaite dropped in front of the opposition midfield line to support the left-back Alba and the left midfielder Coutinho. On this occasion Levante’s right-back Coke did not track Braithwaite and Barcelona were able to create a 3v2 numeral superiority in a small area on the left flank. The ball was fed to Coutinho who faced forwards eventually through a few passes of combination. Coutinho was then able to hit the final pass on the half-space in this scenario.

On top of this, Barcelona was also effective in progressing the ball from the middle third to the final third. They utilised flank in the middle third to transit the ball to the central spaces in the final third. They could achieve so as when the ball was on the flank, the defensive block of Levante did not move collectively to press but left a huge gap in the centre. That was when the deep-lying pivot Busquets could run from deep and receive in those spaces, with bringing the play into the final stage later with his excellent passes. 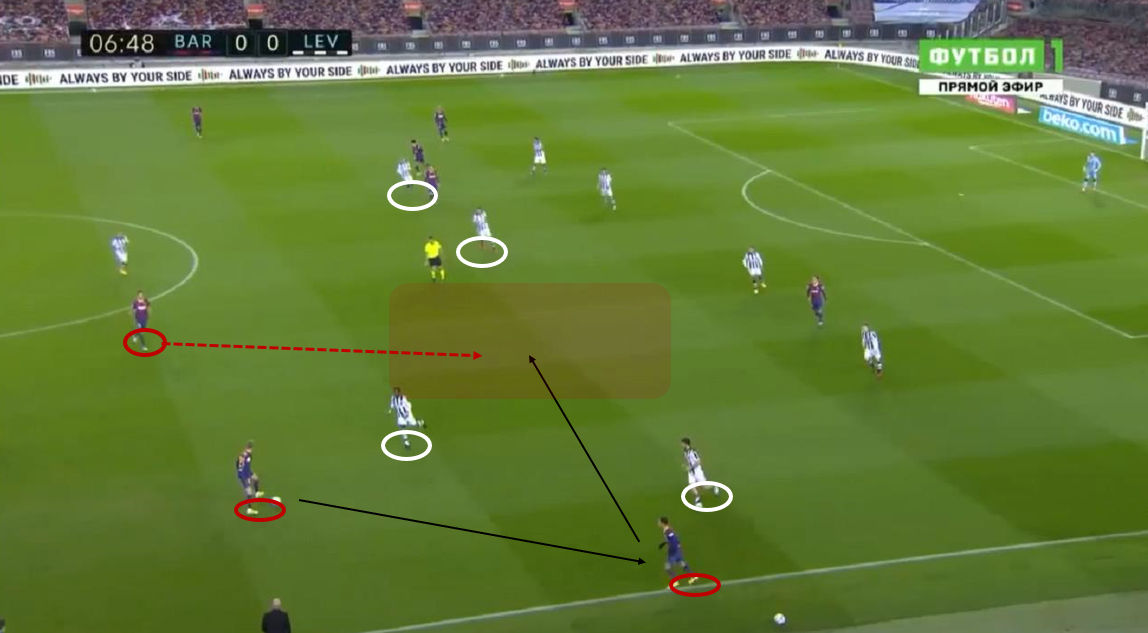 As you could see from the above manifestation, Barcelona possessed the ball on the right flank. Levante pressed the ball with two players moving to the side, whereas the rest two of the midfielders did not move along with them. This left a huge gap in the centre. Busquets saw the huge gap, and he ran from deep to dynamically occupy that space, latching onto the ball facing forwards. Then he could manipulate the play to the final stage.

Apart from this, they could also win fouls in the dangerous area utilising great dribblers like Coutinho and Messi.

Although Barcelona won the game in the end, there were still a lot of issues that they need to work on in the future. For example, deploying a single pivot was a bad decision from the defensive point of view, especially letting Busquets, whose pace and mobility decline over these few years, to do the job.

What’s more, a major issue in the attack was that the player movement did not support the ball movement, which might lead to the loss of possession or a waste of chances to further develop the play. This frequently happened in the final stages of attack, especially when the ball was in the crossing zone while there were not enough players in the box to combat for the first ball. 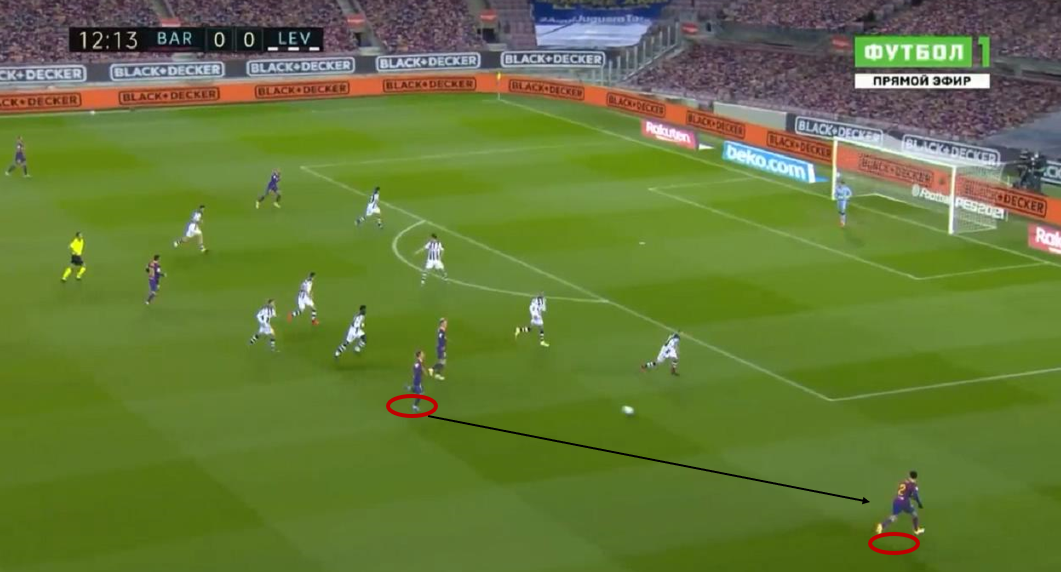 As you could see from the above image, the ball was delivered to the crossing zone. However, the players outside the box did not make an attempt to follow the ball movement to rush into the box. As the right-back Dest received the ball on the right, there was only one player inside the box to be the target of the cross. This forced Dest to play back and wasted a chance to put the ball into the box.

Though Barcelona eventually won this game and shared a majority of possession, their effectiveness in attack was not good enough. If they wish to rank the top of the table and compete with Real Madrid in La Liga, they need to work more on their offensive tactics.