Two sides with stellar defensive performance in the season so far went head to head against each other in the fifth match week of the Indian Super League. Hyderabad FC has had two clean sheets and conceded just one goal before coming into this game. Former La Liga coach Manuel Márquez Roca had to watch the game from the stands as he was shown a red card in his previous game against Jamshedpur. Thangboi Singto took charge of the team and commanded instructions from the technical area in his absence.

Three times ISL champions had a dream start to the new season with three wins and three clean sheets in their first three matches. However, former Atletico Madrid player, Antonio López Habas faced his first defeat against Jamshedpur, more like a redemption win for Owen Coyle. With Mumbai City getting consistent week after week, ATK Mohun Bagan couldn’t afford to lose more points in order to stay par at the top. 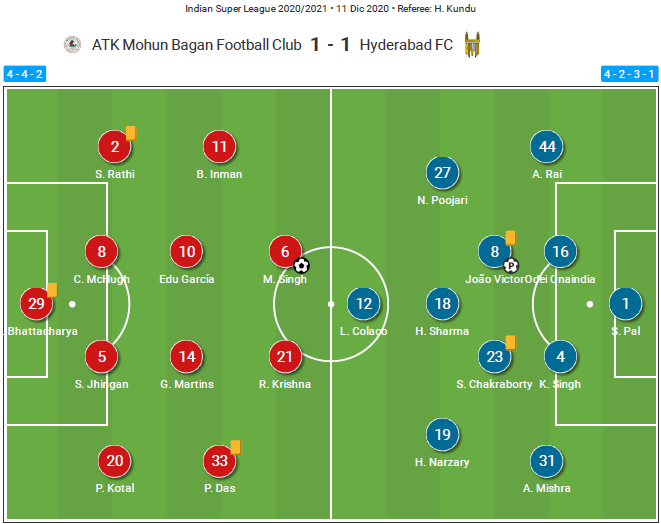 ATK Mohun Bagan changed to 4-4-2 from their preferred 3-5-2 and made two changes from their 2-1 defeat. Arindam Bhattacharya was in charge of the goal with Pritam Kotal, Sandesh Jhingan, Carl McHugh and Sumit Rathi formed the defence line. Prabir Das and Brad Inman played as the wingers with Glan Martins and Edu García as double pivots. Manvir Singh and Roy Krishna led the line.

Hyderabad started in their preferred 4-2-3-1 formation along with three changes made for this week. Subrata Paul returned in goal with a backline of four consisting of Asish Rai, Odei Onaindia, Chinglensana Singh and Akash Mishra. João Victor and Souvik Chakrabarti played as the centre midfield. Halicharan Narzary and Nikhil Poojari supported from the wings with Liston Colaco playing upfront and Hitesh Sharma playing behind him as the attacking midfielder. 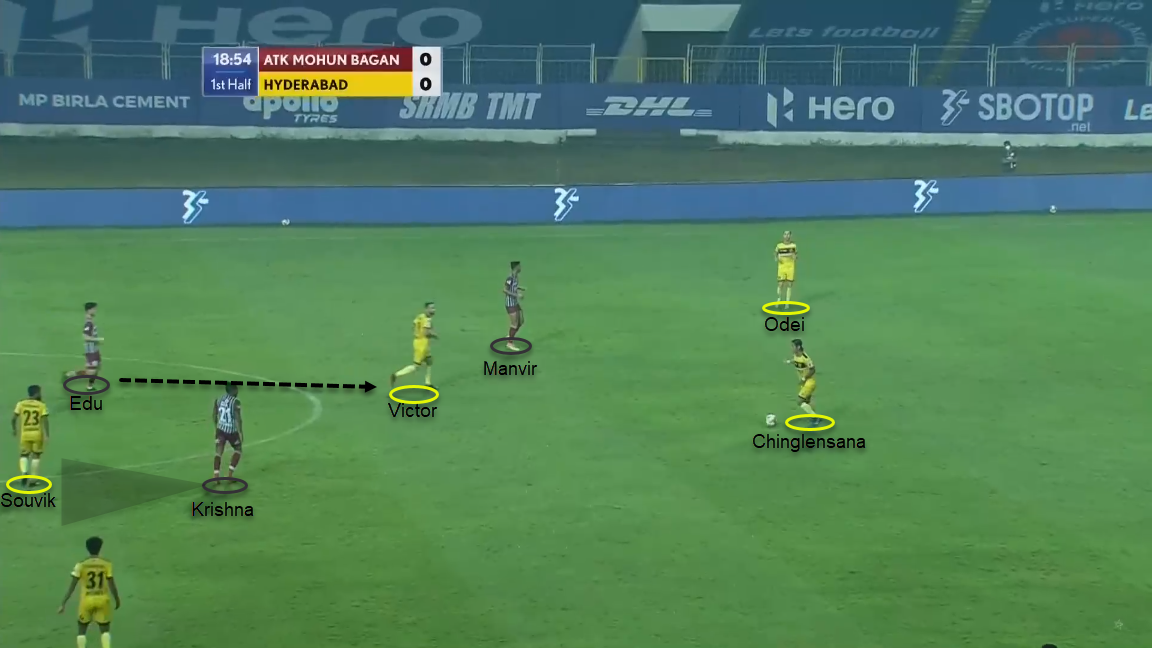 A change of formation brought along a new pressing style for ATK Mohun Bagan this season. They maintained their 4-4-2 shape off the ball with more compactness. Unlike their usual mid-low block setup, they pressed higher with intensity in the initial minutes of the game. A few players were assigned specific tasks while they tried to regain possession.

As Manvir and Krishna looked to apply pressure on the centre-backs, Krishna also kept Souvik in his shadow to eliminate one passing option. The Mariners were well aware of Victor’s role in this Hyderabad’s side. The Brazilian who is the anchor of the midfield was subject to Edu’s pressure every time he received the ball. He was closely marked by Edu in his midfield line and when he tried to move higher. The intensity and the level of pressing subdued through the course of the match but their shape were consistent throughout the game. The front six made the pitch smaller by sticking close and at times employing only in one vertical half of the pitch. 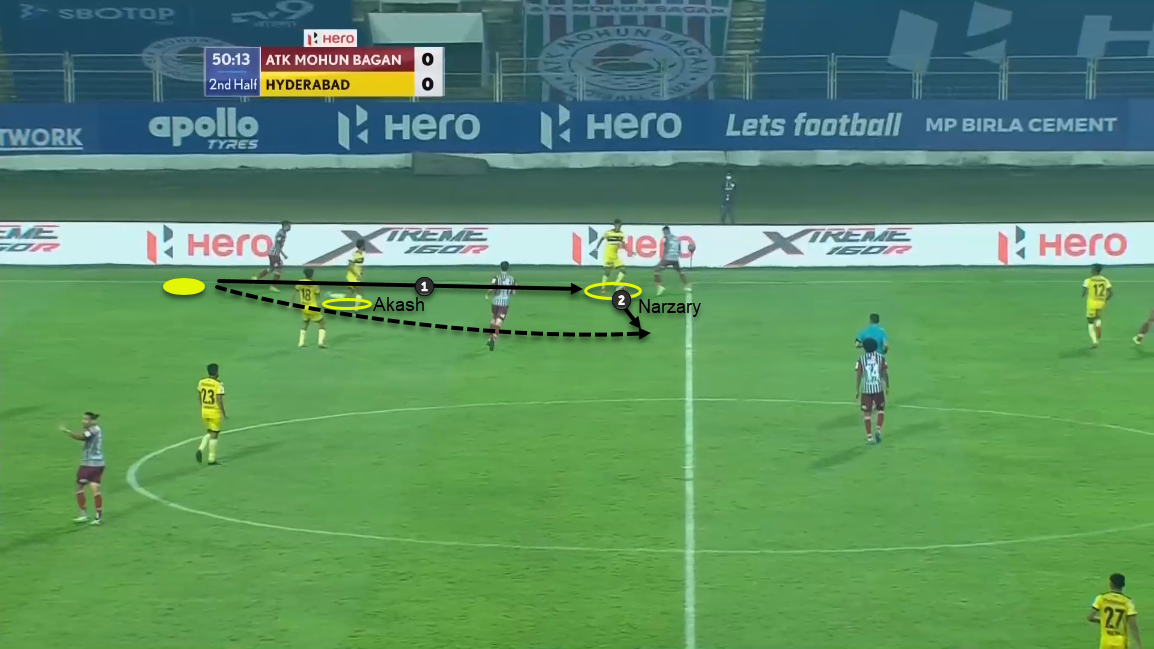 Manola Marquez has devised a set tactic of build-up at Hyderabad which the team executes quite efficiently. However, they had to adapt to the challenges offered by ATKMB and made a few in-game changes to their patterns of play. Hyderabad’s players do not generally tweak positions but rather rely on combinations and player movements for progression. Yet, since the centre-backs faced pressure from two forwards (2v2) and Victor was not offered much breathing space in midfield by Edu, one of the centre-midfielders started dropping between the centre-backs.

Since Edu was reluctant to follow Victor all the way up, it allowed Hyderabad more time in the first line of attack. The principal tactic was to still use the full-backs and the wingers for ball progression as we saw them do that against Jamshedpur too. Hyderabad’s players exchanged quick passes while making underlapping/overlapping runs on the flanks.

It is difficult to interpret ATK Mohun Bagan’s true reason to move to 4-4-2 from 3-5-2 as it could be due to Tiri’s injury or a systematic plan to stop the Hyderabad’s build-up from the flank. This is because it allows ATK Mohun Bagan to have two players on both the flanks instead of a lone full-back. Due to which, ATKMB’s wingers kept an eye on Hyderabad’s full-backs and tracked their runs to mitigate the threat. The men in yellow managed to fabricate an alternative way for ball progression from this situation. 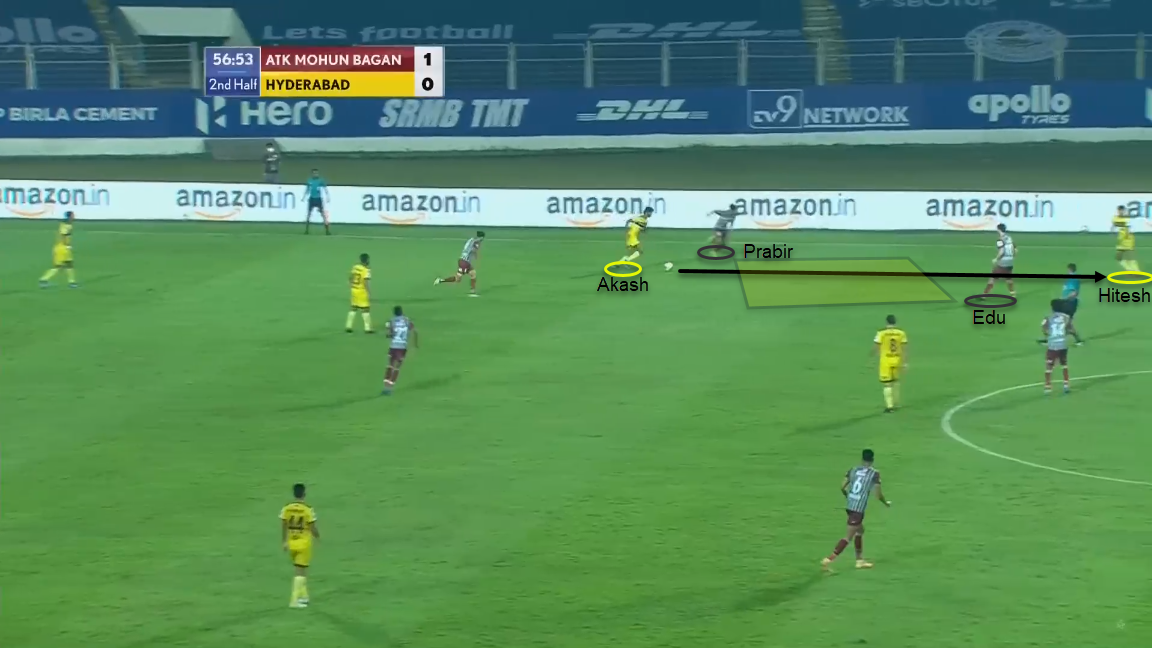 They utilised Hitesh as a freeman behind ATKMB’s midfield line. The Mariners’ two-man midfield couldn’t keep tabs on Hyderabad’s central attacking midfielder and their centre-backs didn’t step out of the back line to press as they prioritised organisation overpressure. Hitesh always positioned himself between the opposition winger and centre-midfielder on the ball near-side. He also hugged the touchline occasionally when space was created to support the full-back. All this eventually facilitated the intended one-twos and combination play. 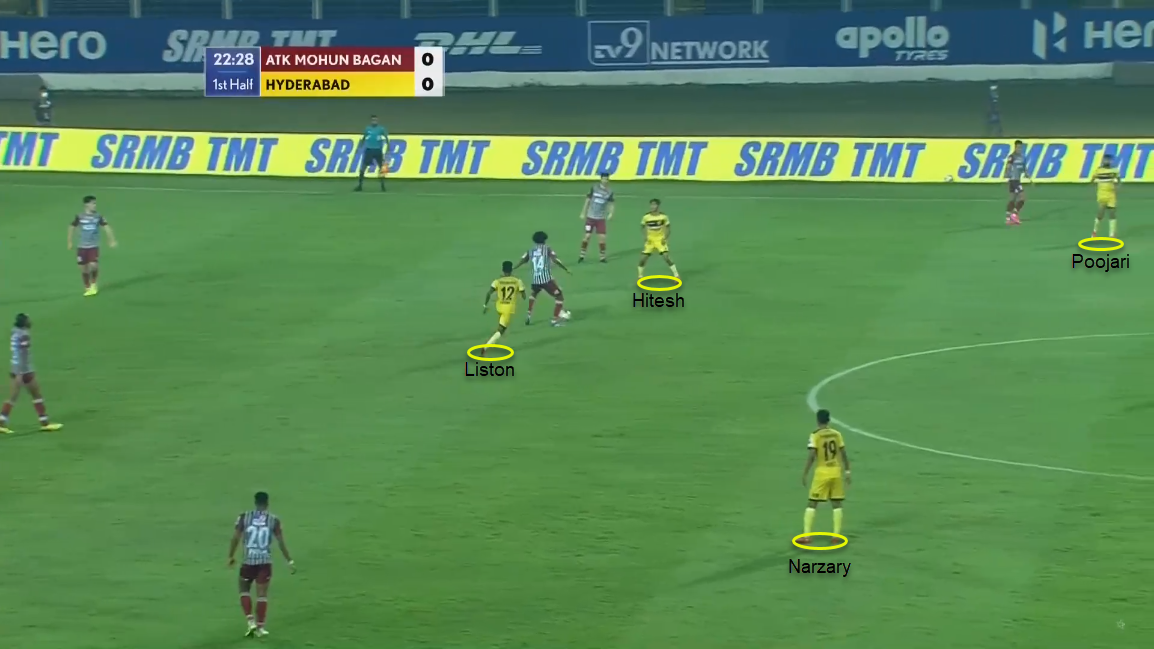 The Nizams lined up in 4-4-2 without the ball. Hitesh and Liston paired up to form the first line of defence. They interacted with limited support from their second line of defence, which is Hyderabad’s midfield. The second line of defence stayed close to the half-line with the wingers converged and relatively higher than the centre midfielders. ATKMB had the licence to circulate the ball behind and occasionally faced pressure from Hyderabad in numbers.

They didn’t seek much support from their forwards as to hoping for them to drop. Instead, the front four stayed up to challenge Hyderabad’s backline. The idea was never to play it through the opposition but was to get the ball into the opposition’s half as quickly as possible. Therefore, even when they played a couple of passes comfortably in their defensive half, ATK Mohun Bagan looked to go long to their forwards. The goalkeeper also didn’t consider second options and launched all the balls forward. 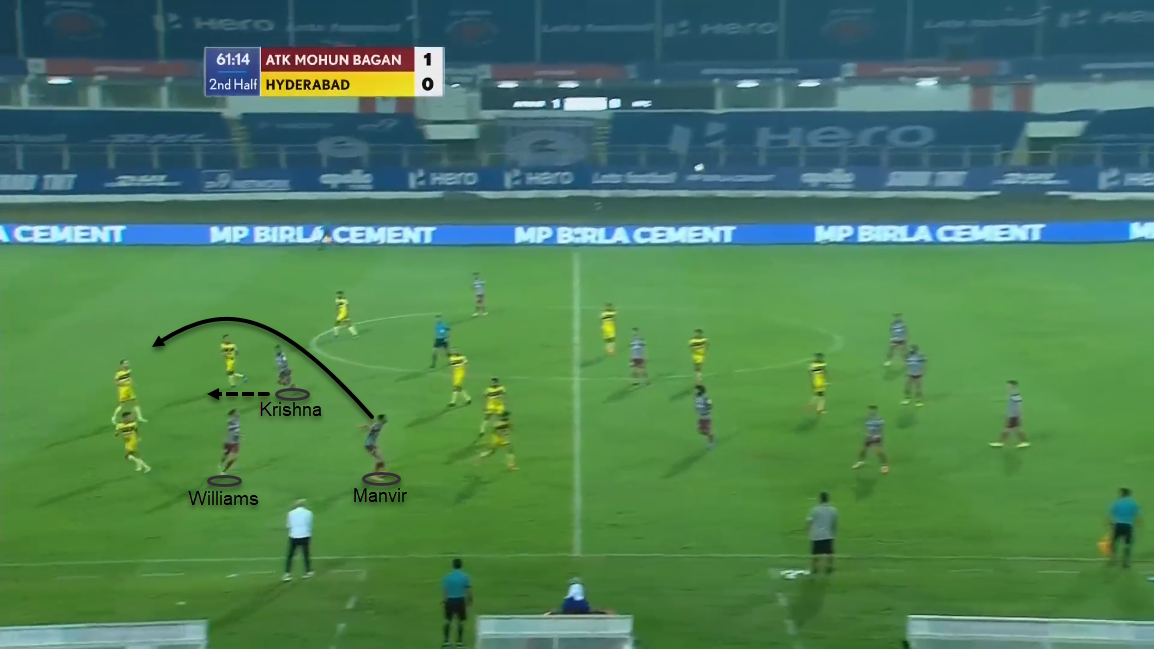 The 1.91m tall centre forward, Manvir was the ideal target for long balls. He tends to drop in the hole between the opposition’s midfield and defence line in order to flick it forward. The players around him would make a run to attack and win the second ball. When he played as the second striker, Das/Inman along with Krishna pushed forward to chase his header. After half-time, Inman was replaced by David Williams and Manvir moved to the left wing. Still, the plan remained the same and just the receiving players around him changed. Other than winning free headers due to his wise positioning, Manvir won six out of the eight aerial duels contested.

The Mariners dominated the first half in terms of performance despite keeping less possession. After winning the first ball, Manvir would assess the pitch and manoeuvre smartly to help his team. He didn’t rush to get inside the box but instead supported his teammates in the wide channels. Manvir didn’t hesitate to deliver first time balls or set it up for the wide players. He delivered two out of the four accurate crosses for his team. 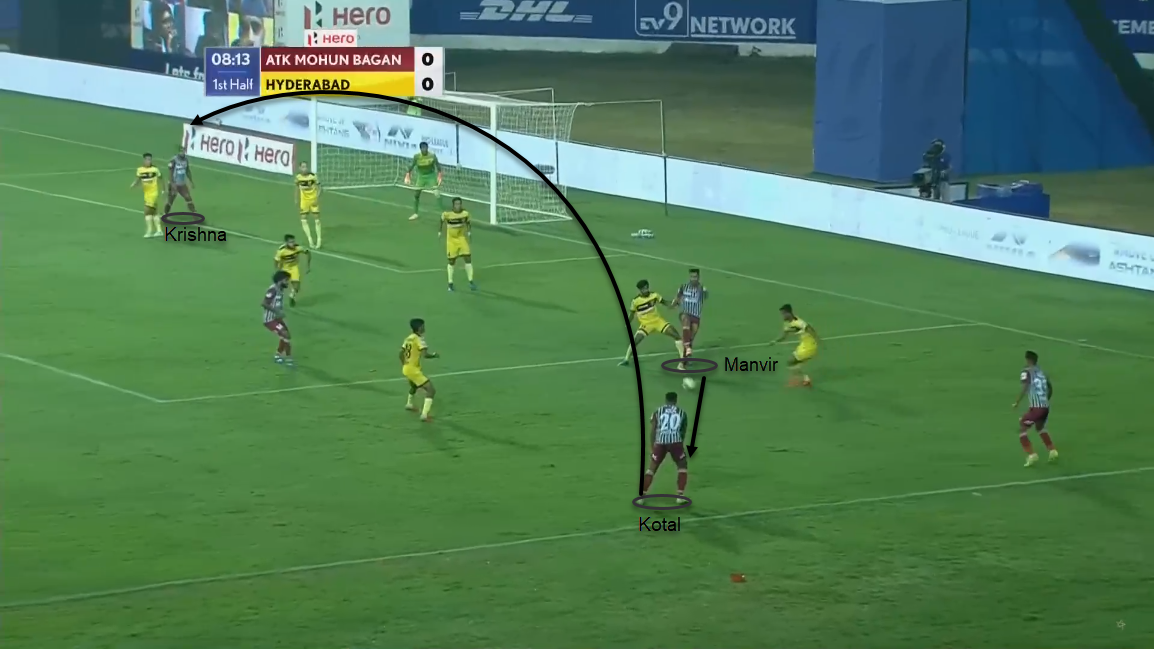 ATK Mohun Bagan majorly focused on the right channel to create their chances. They delivered 12 out of the total of 17 crosses in the first half. They kept Subrata on his toes and demanded some crucial saves in the first half. Unfortunately, they didn’t get the lead in the first half which is why they made some half-time changes. In the second half, Manivir received the ball from an inaccurate goal-kick by Subrata. He drifted with the ball and covered a distance of 28.94m to score his solo goal. 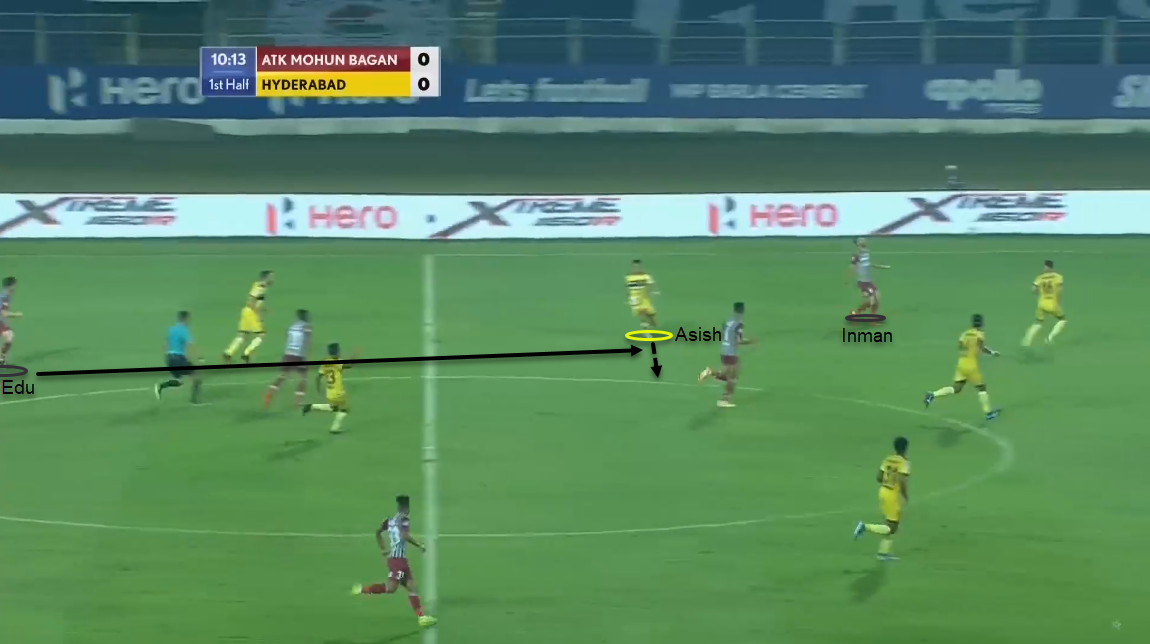 ATK Mohun Bagan is known for their transitional play. They have scored multiple goals from it and possess immense threat as they play with at least two forwards. On winning back possession, ATK Mohun Bagan midfielders attempted quick balls to their furthest player. The left channel was popular for such attacks as the forwards tried to exploit the space left behind by Hyderabad’s surged full-backs. Ashish and Onaindia were impressive in dealing with those attacks with well-timed interceptions and tackles. However, Manvir could convert those chances into shots on two occasions. Once it got blocked and the other hit side netting. This exemplifies ATK Mohun Bagan’s prowess in both positional and transitional attacks.

Both Liston and Hitesh had an underwhelming performance in regards to the offensive returns produced by them. Having said that, they both didn’t perform poorly though. They worked their socks off and did their best to help the men in yellow. So the reason for such a performance could be them playing out of their natural position. 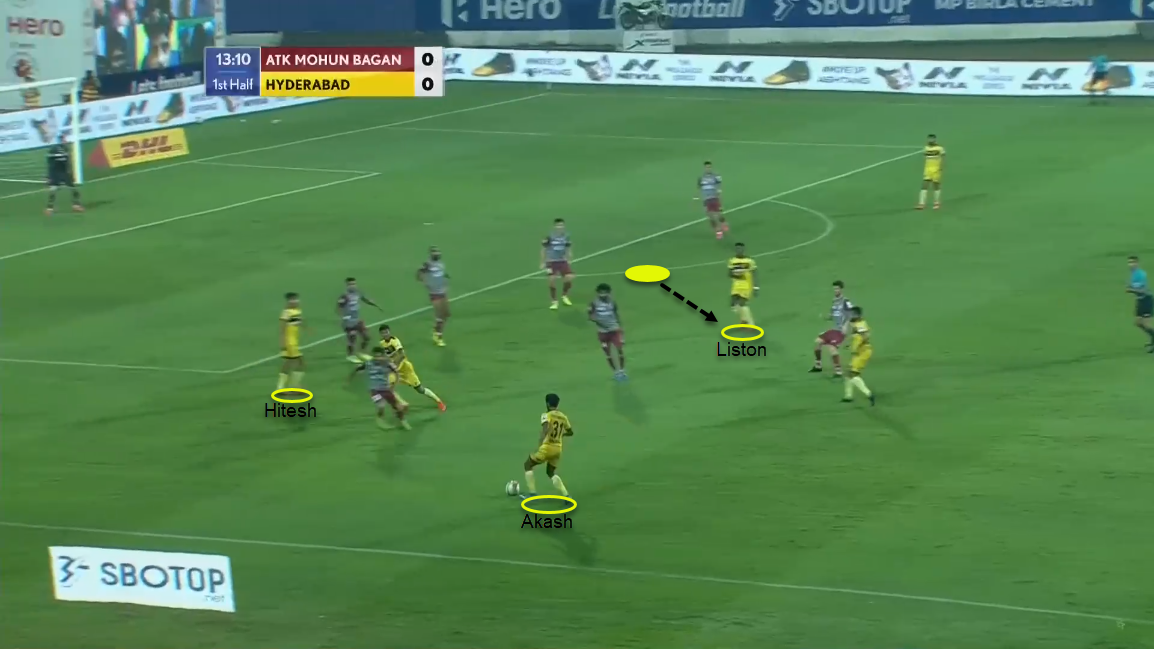 Liston Colaco who is a winger who started as the number nine in absence of Aridane who got injured in the last match against Jamshedpur. Hitesh Sharma has been utilised as a centre-midfielder, played as the attacking midfielder for this game. Hitesh was extensively used in the build-up phase. He also drifted wide to help the wingers and full-backs. Therefore, his presence in the 18-yard-box was limited. Liston liked to drop back in order to help his team in possession and to receive the ball. He likes to have the ball at his feet and run direct at his opposition. ATK Mohun Bagan defenders didn’t budge at such movements and opted to stay back in shape. 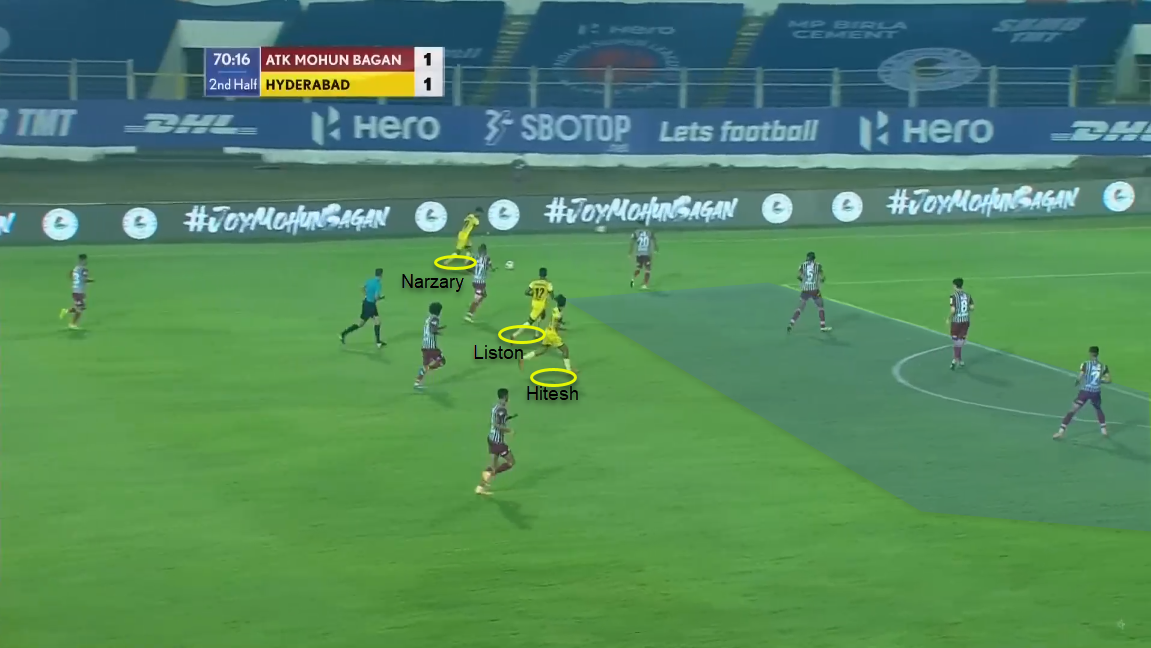 Therefore, there was no real attacker for Hyderabad to pin the defenders, take the line deep or to make runs in behind. The offensive players stayed in front of the line for the majority of the game. Even when the wingers had the ball in a promising position to deliver, they failed to get numbers in the box. 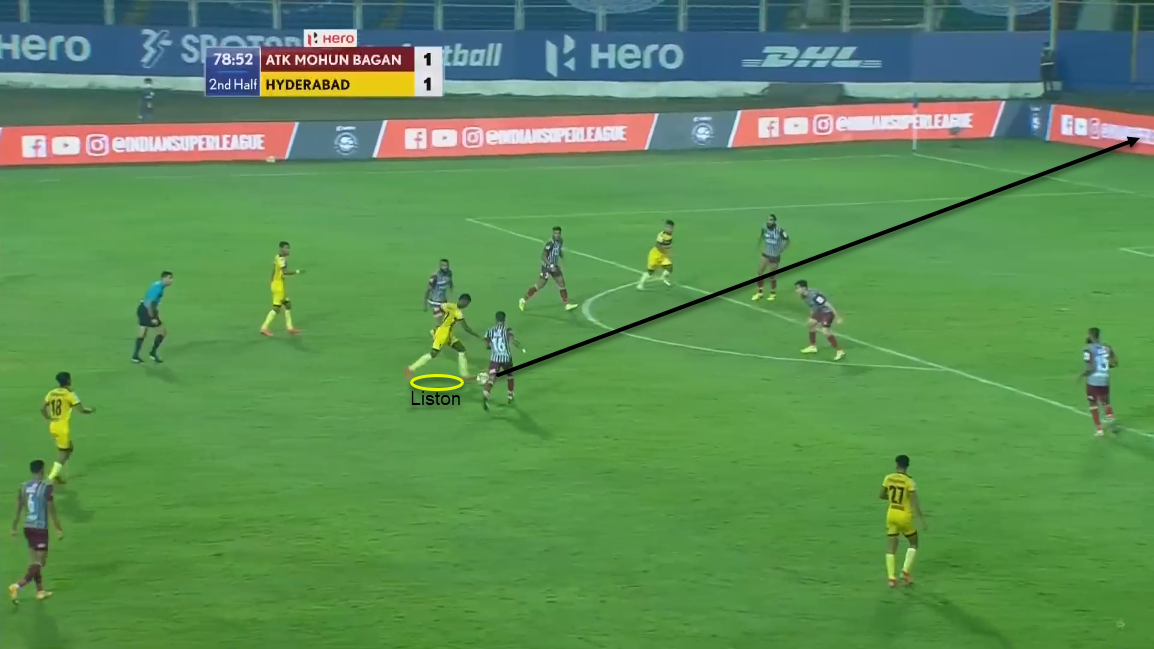 As a result, most of their shots came from the outside of the box. Also, this didn’t put ATKMB’s goalkeeper to a test. They took 12 shots in total out of which eight came from the outside of the box. Seven of their shots were off target and four got blocked. The only shot on target came off the penalty taken by Victor. Lack of a real striker was clearly visible in their performance. Despite having control over the actions in all the thirds of the pitch, they struggled to produce in the 18-yard box.

The Nizams have shown true resilience and grit in the league so far. They have done exceptionally well defensively with such a young backline. However, they need to address the issues in offence especially now that they are without their main man up front, while ATK Mohun Bagan introduced a new dimension by showing their ability to adapt to a new formation and system. Despite conceding three goals so far, ATK Mohun Bagan is yet to concede from an open play. It would be interesting to know if they carry forward the new style of play or advance with similar tactics into the next game against FC Goa.