Inter faced Spezia last Sunday and the game ended with a 2-1 win for Inter which helped them get closer to leading the Serie A and attaining the top spot which is actually occupied by Milan. Spezia were able to prevent Inter from scoring until the 52nd minute before Achraf Hakimi scored a goal following a solo effort at the right-wing and then Romelu Lukaku was successful in scoring a penalty and at the last minute of the game. Roberto Piccoli‘s shot hit the net and that was Spezia’s sole goal.

The win was also fundamental for Inter not only because they are now concentrating just on Serie A due to their elimination from the UEFA Champions League, but also because there are many teams right below them in the standings and any bad result could see one of Juventus, Sassuolo, Napoli, or Roma take over Inter’s second spot. For Spezia however, the team came to Milano in order to do their best to get the three points or even a point, but things did not go well for them even though they played a good match and managed to disturb Inter especially at the last 20 minutes of the game.

In this tactical analysis article, we will provide extensive analysis of both teams tactics and what Inter did to win this match especially in terms of attacking performance while also looking at Spezia’s defensive and attacking plans during this match. But first, we will begin by presenting the line-ups.

Antonio Conte chose to start this match with his preferred formation, the 3-5-2. This system relied on Samir Handanović as a goalkeeper, Milan Škriniar, Stefan de Vrij and Alessandro Bastoni as centre-backs, and in midfield, there was line composed of five players, Achraf Hakimi as a right-winger, Nicolò Barella, Marcelo Brozović and Roberto Gagliardini as central midfielders and Ashley Young as a left-winger. And in terms of strikers, Inter’s best-attacking duo during these two years started this match; Romelu Lukaku and Lautaro Martínez.

For the visitors, Vincenzo Italiano played with a 4-3-3 formation that was composed of Ivan Provedel as a goalkeeper, Luca Vignali as a right-back, Claudio Terzi and Ardian Ismajli as centre-backs, and Simone Bastoni on the left flank. In midfield, the team relied on Matteo Ricci as a central midfielder and Alessandro Deiola and Luca Mora as right and left midfielders, respectively. In front of them played Gennaro Acampora on the right-wing, Emanuel Gyasi as a left-winger and M’Bala Nzola as the team’s striker. 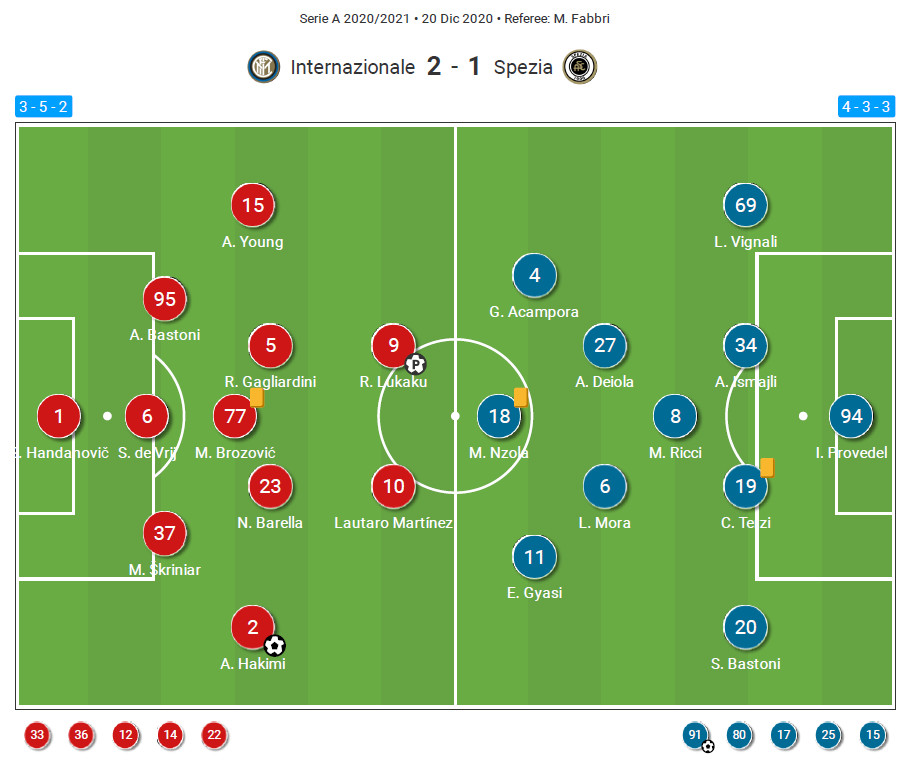 Inter started this match with patience and with gradual advancing into Spezia’s third, and instead of being in a hurry they built up from the back and relied mainly on Hakimi’s overlaps on the right and Young’s assistance from the left as well. And as the game went on, Inter players started to get more and more forward to the point that at times six players were on the same line with Spezia’s last line of defence, as you can see in this picture. 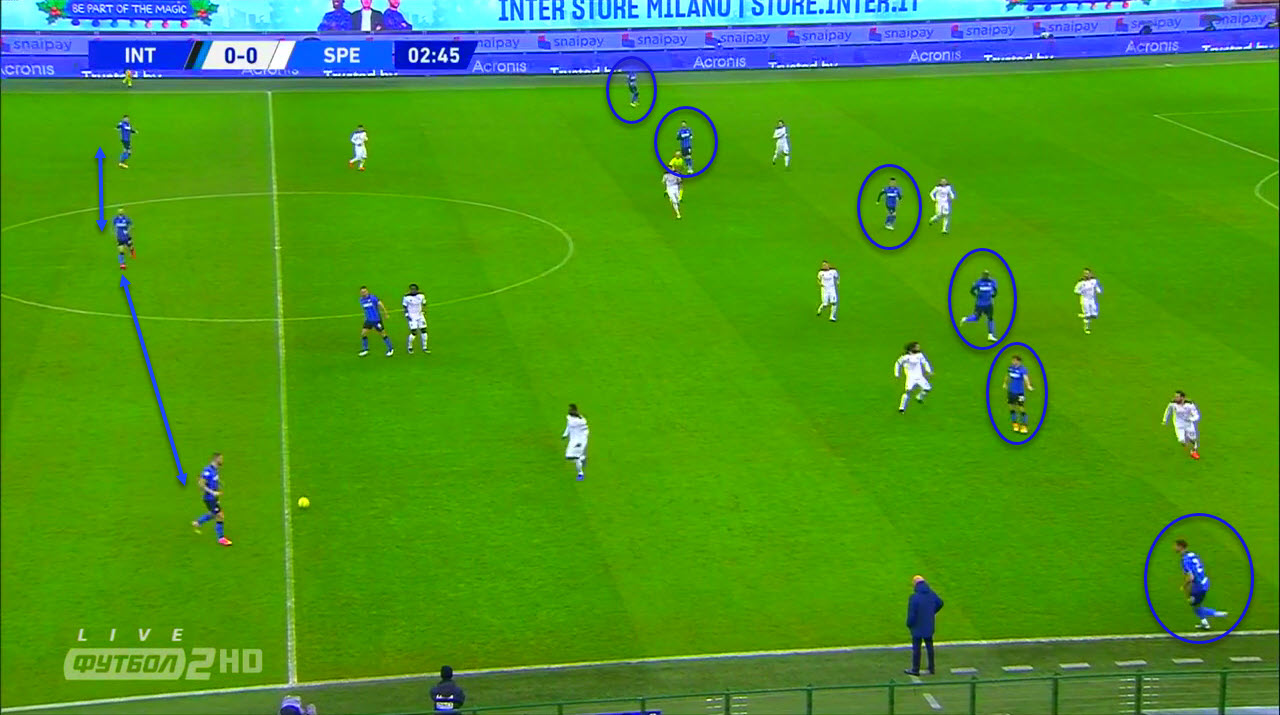 Moreover, Inter’s defensive block was usually high during this match and the three defenders acted like midfielders and they were responsible for starting the action and passing either to both wingers or to one of the midfielders who makes himself free of marking.

If all of these options are not possible, Inter defenders tended to rely on Lukaku’s outstanding physical strength and crossed the ball directly to him and the latter would pass to Martínez to make passing combinations with him in the final third.  And this was one of the team’s most efficient attacking solutions during the last couple of months.

In most cases, like this one, Lukaku receives the ball and gives it to Martínez who accelerates and waits for Lukaku’s movement towards the six-yard box before giving him back the ball with a through pass into space behind the defenders. Most of Inter’s fruitful attacking actions this season were created in this way and this match was not the exception. 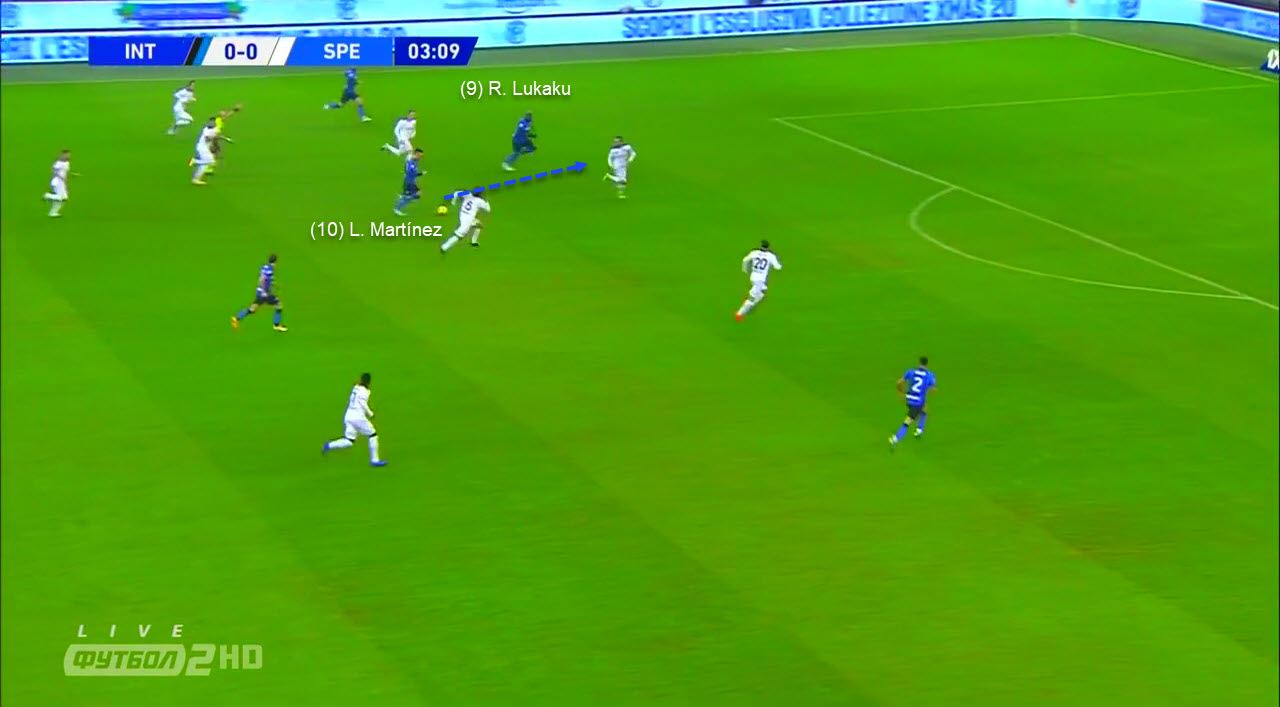 However, this match also witnessed Hakimi’s excellent performance not only because he scored the first goal but also because his adaptation process did not take long and the results of his fast integration have already started to appear since the last couple of matches. And it was clear in this match how he is now playing without too much thinking and how he grasped Conte’s plans by heart.

That’s why we saw him participating in the different aspects of the game with more determination and confidence than in the previous matches and he was able to bother Spezia both when in possession and when out of possession.

As you can see in this picture, Hakimi was the first player to press high on Spezia’s defender and preventing them from starting the action and building up from the back freely. And at the same time, he was sure that he was covered by Barella and Škriniar at the back who were both covering Hakimi’s spot and marking the players who were there. 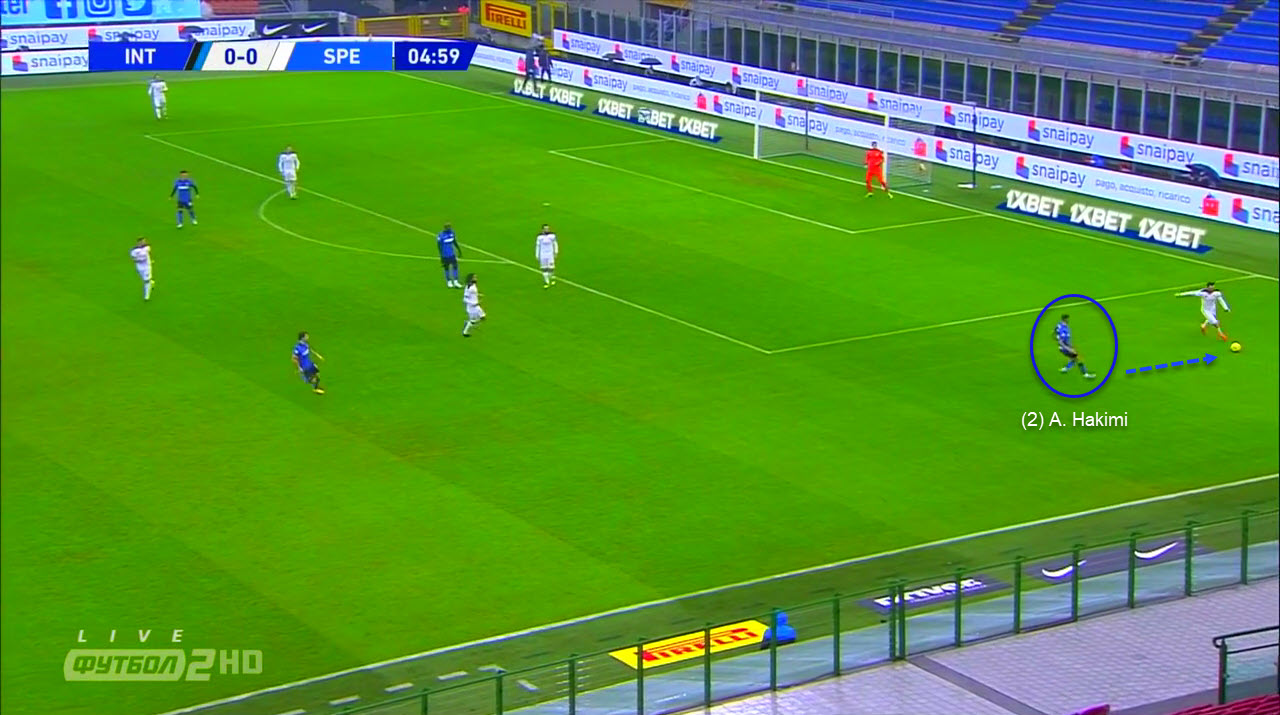 Not only that, but Hakimi was also very present when the ball was with one of the midfielders and he usually moved to support Lukaku and Martínez in the final third instead of staying on the wing and waiting for a pass. He joined both strikers several times and positioned himself in the box as a third striker to receive the ball or at least create numerical superiority to free some space for the main forwards as you can see below. And this was almost exactly the role that Antonio Conte gave to Stephan Lichtsteiner when both were at Juventus. 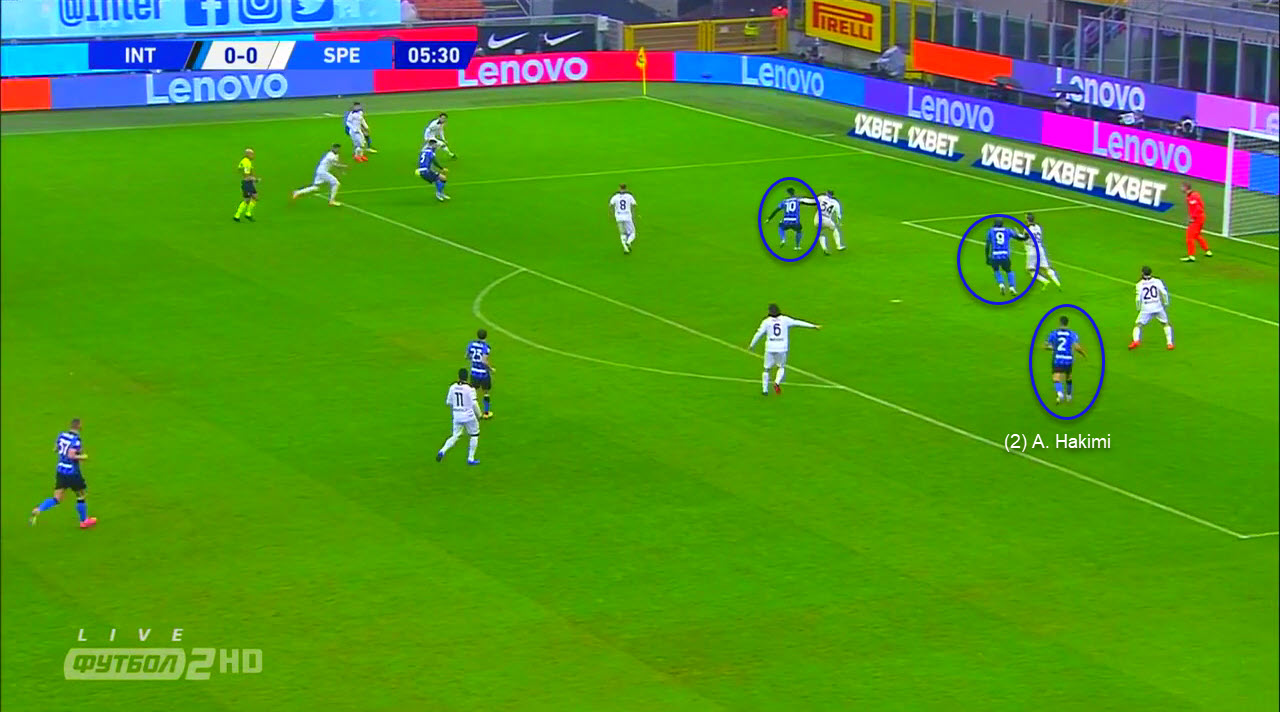 Spezia came to the Giuseppe Meazza Stadium with a willingness to disturb Inter and win, however, during the first half and a large part of the second half, they did not do a lot to deserve a win especially from an attacking perspective. Nevertheless, it should be mentioned that this team had more possession than Inter in this match, with 57.19% against 42.81% for Inter. But the difference was apparent in the final third given the quality of players of both teams, and therefore, Inter had the best share of shots and shots on target; Inter had 10 shots/ four on target, while Spezia had seven shots and only one of them was on target. And that was their goal’s shot.

So, in other words, Spezia did only shoot on target when they scored their goal at the 94th minute. And playing against a team like Inter, possession of the ball without aiming at shooting on target is never enough to make a good result against this kind of teams. Also, playing for a draw and waiting until conceding goals in order to advance with more numbers and attack with real determination was not a successful approach against Inter.

Moreover, when the team tried to press high on Inter, their pressing was usually ineffective since it was not correctly executed. Spezia players did not press with real determination and have often left passing solutions for Inter players and this not only made their efforts meaningless but also caused more danger at the back since they became in numerical inferiority. 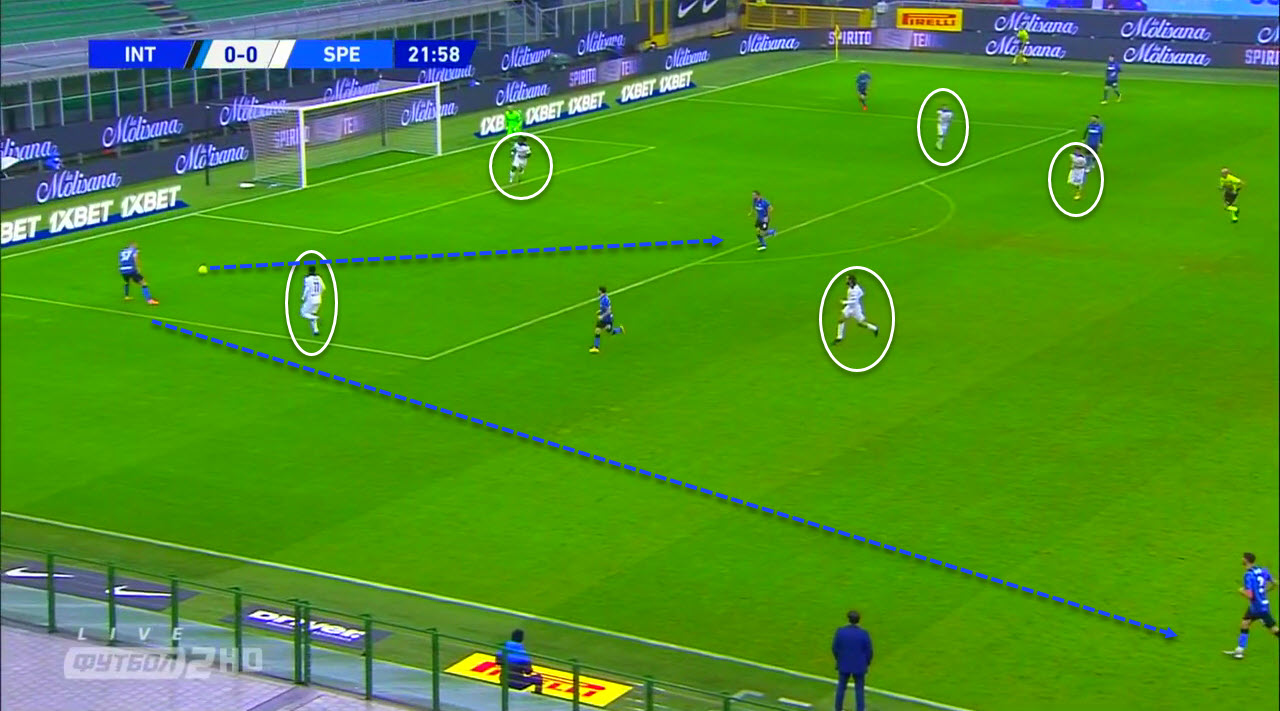 Inter were the happier side after this match since they won, scored two goals, and continued their good run of form after their elimination of UEFA Champions League. However, they still need to be more balanced at the back when they face tougher teams and work on trying new alternatives plans in attack to surprise their next opponents.

For Spezia, this result was very probable and for a team was just promoted to Serie A, Spezia should not be worried about their performance because they did their best to disturb Inter but it was not simple to them. All that is needed now is the concentration on the upcoming fixtures and aiming to win points as soon as possible to lift the morale of the whole squad and have more motivation to enhance the team’s position in the standings.