Poland and the Netherlands met in a pivotal UEFA Nations League match Wednesday night, with potential Nations League Finals implications. If Italy had lost to Bosnia and Herzegovina, the winner of this contest would have advanced to the tournament Final. The Eagles had gone five total matches unbeaten before losing to Italy three days before. The Netherlands were on a similar run of four matches unbeaten, including draws against Italy and Spain and a recent victory over Bosnia and Herzegovina. This tactical analysis will examine the strategies of both sides and how the visitors were able to overcome Poland’s initial lead. 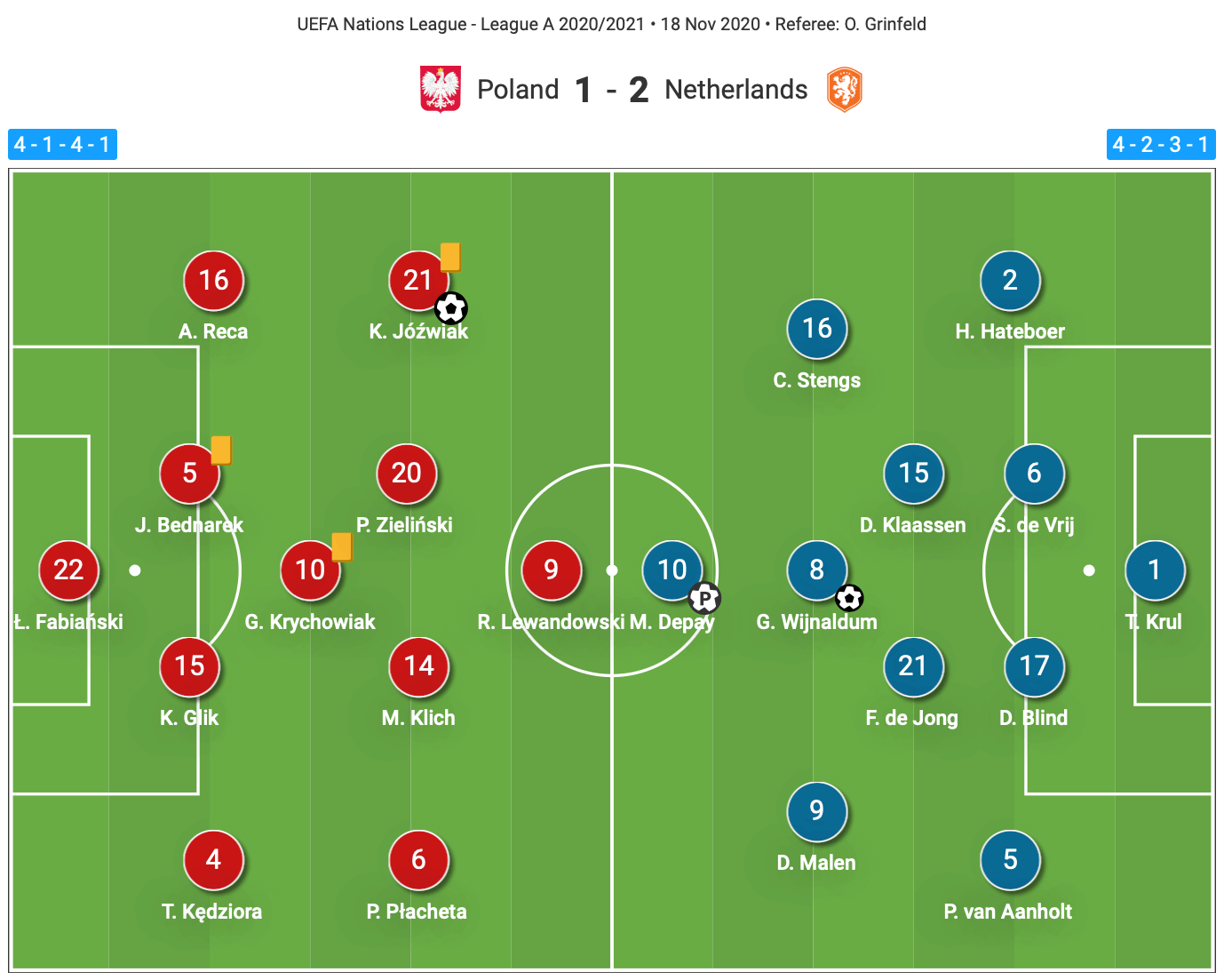 In his fifth match in charge of Oranje, Frank De Boer made four changes on account of this being the nation’s third match in a week. Hans Hateboer and Patrick van Aanholt initially began the match as the full-backs, with Denzel Dumfries and Owen Wijndal dropping to the bench.  Daley Blind, who started the previous match, held his starting spot in the backline beside Stefan de Vrij in lieu of the injured Virgil van Dijk. The dynamic three-man midfield of Davy Klaassen, Georginio Wijnaldum, and Frenkie de Jong remained constant. Young wingers Calvin Stengs and Donyell Malen were the other two new starters in place of Steven Berghuis and Luuk de Jong.

Poland began the match with considerable defensive pressure in the middle and defensive third, forcing the Netherlands to play through the wide areas. In these spaces, the nearest ball-side Polish winger and either midfielder or full-back would swarm the ball, with the next nearest teammate often blocking the nearest passing outlet.

In the example below, right-back Tomasz Kędziora and Płacheta pressured the ball off attacker Memphis Depay, in the wide area. Klich also moves towards the ball while maintaining a cover shadow on his initial mark. 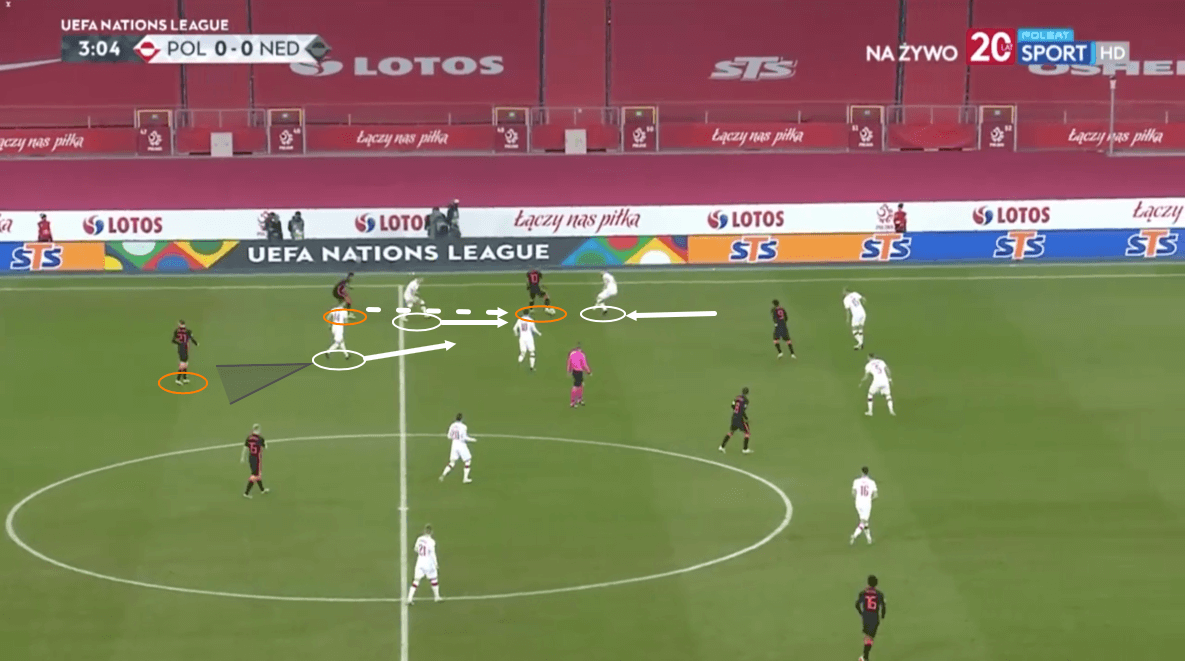 Poland’s man-marking prevented most of the Netherland’s initial progression attempts. This sound defensive start was evident on the opening goal. As the Netherlands possessed the ball near the touch line in the image below, Zieliński and Jóźwiak applied pressure on the connection between Klaassen and Hateboer, forcing a turnover. 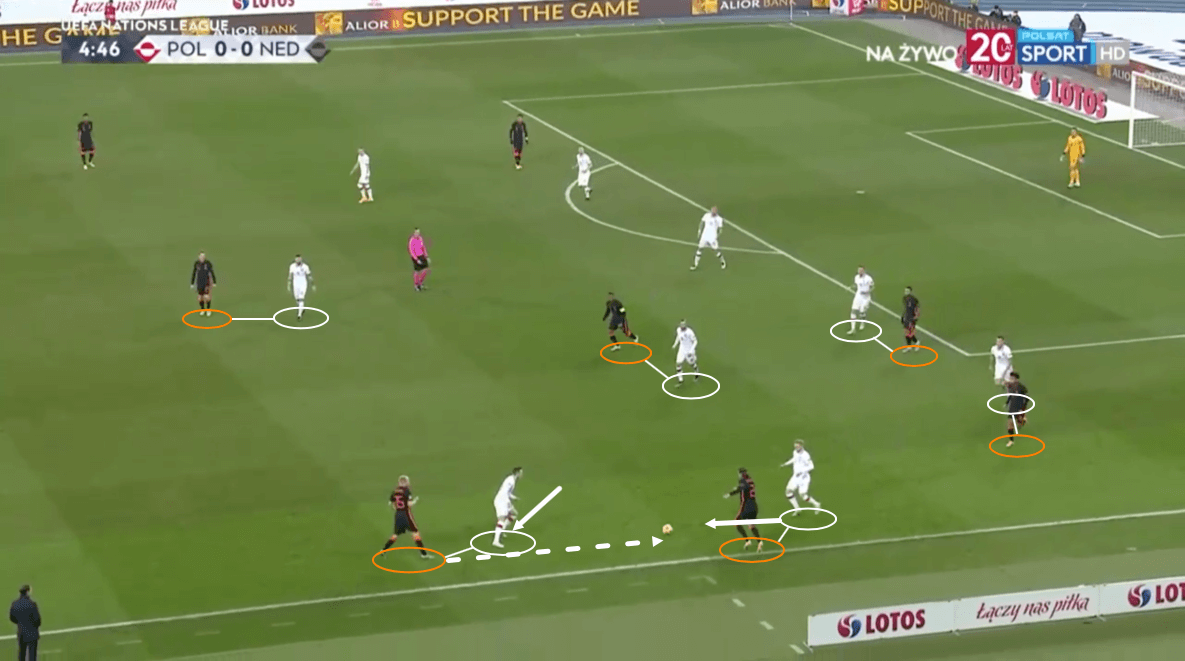 Zieliński immediately passed forward to Lewandowski, who turned his body to receive the ball in an attacking position. With Hateboer in the advanced areas and de Vrij applying direct pressure on Lewandowski, the right wide area of the Netherlands’ defence was vacant. Jóźwiak used his imposing pace to run into this area ahead of Klaassen and receive a pass from his attacking teammate. 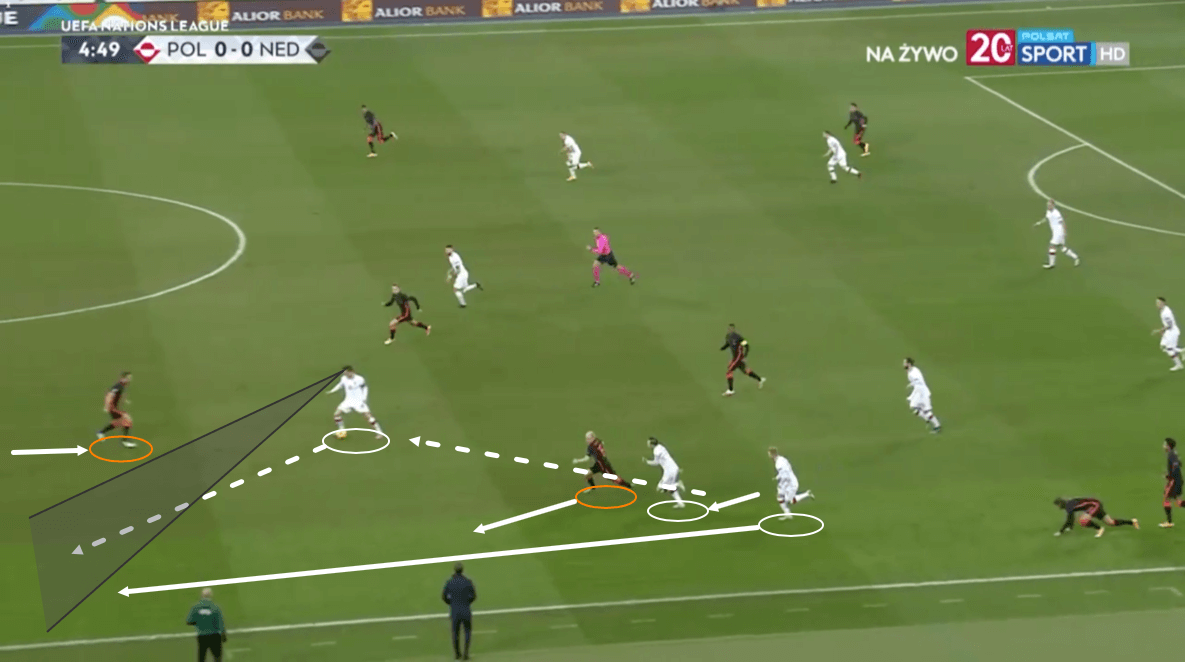 From there, Jóźwiak took advantage of the Netherlands’ inability to track back quick enough defensively, and scored a stellar individual goal.

About 15 minutes or so after the early goal, there were only a few moments throughout the rest of the match in which Poland defended aggressively. During those moments, the discipline of the back line often prevented any potential attacks in behind, and the pressure in the middle of the pitch was efficient. Here, the aggressive defensive approach by Bednarek along with assisted pressure by Jóźwiak forced a turnover in midfield, which eventually led to a Poland corner kick. 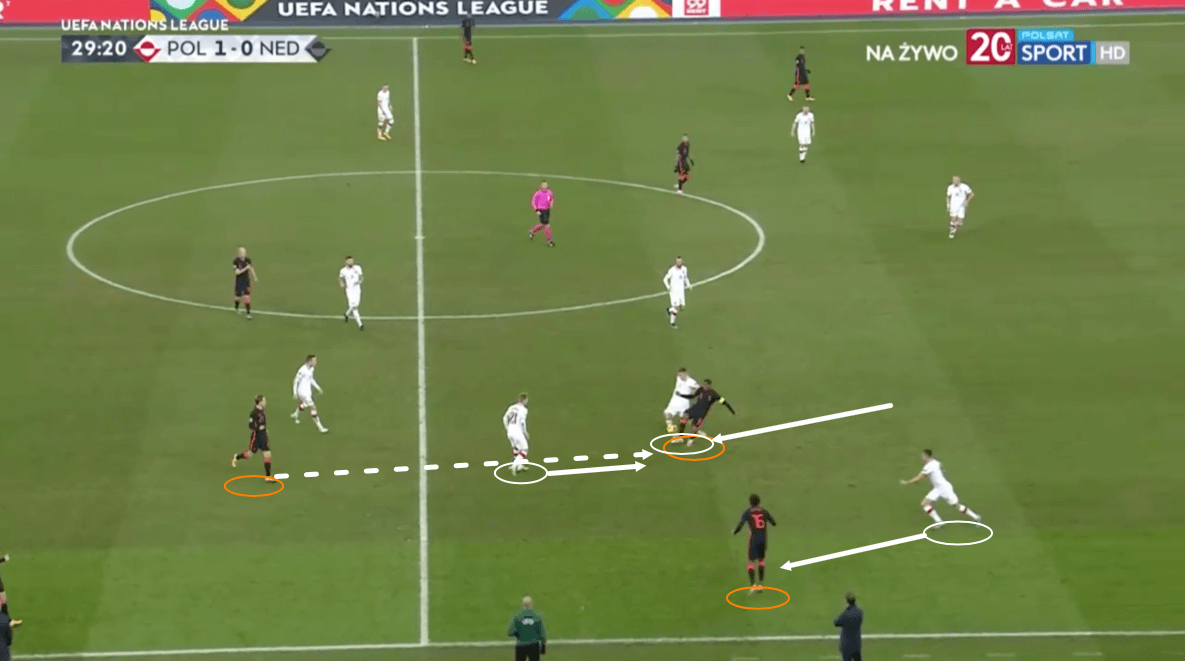 However, instead of continuing this approach, Brzęczek opted to focus the majority of the defensive tactics on utilising the defensive block rather than applying considerable pressure. In the scenario seen here, even after the Netherlands recycled possession, Poland still offered little to no pressure on the ball, with nine of the 10 outfield players forming a low defensive block. 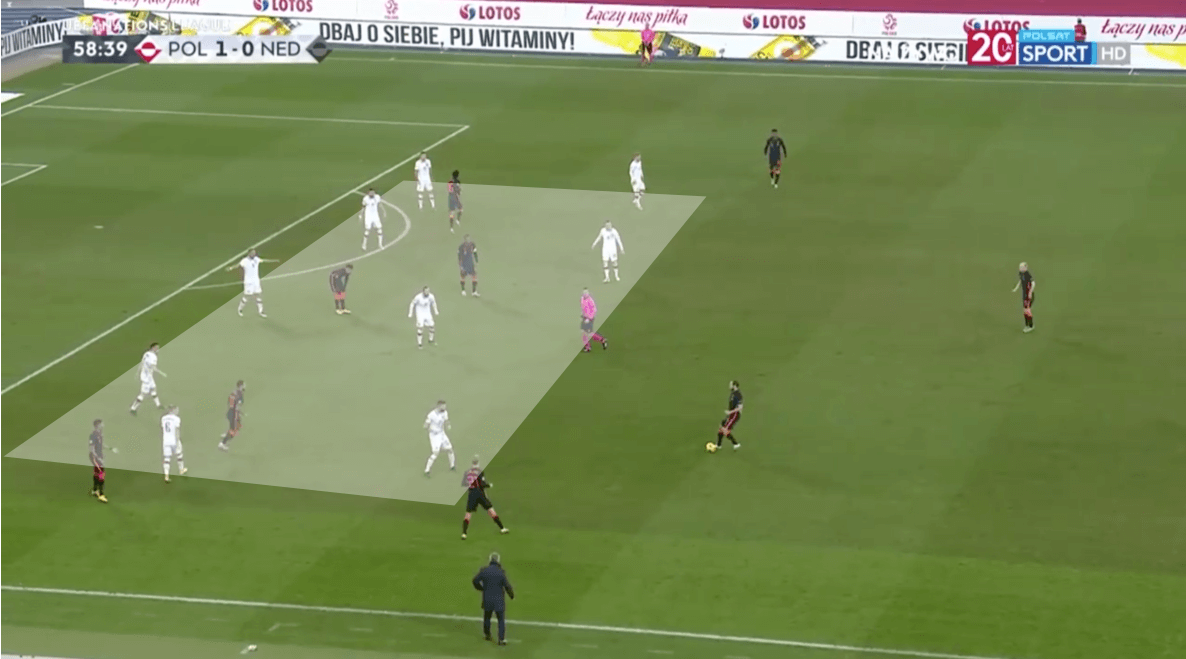 This tactical defensive decision by Poland led to an increase in attacking opportunities for the Netherlands, as the visitors used various methods to penetrate the defensive block. A tactic they attempted earlier in the match is seen below. After an initial attacking attempt resulted in recycling the ball back out of the attacking zones, Malen and Wijnaldum found themselves at the top of the Netherlands’ attack. They lined up on the outsides of the opposing right-back and the right centre-back respectively, and began slowly shifting wide. This opened up a gap between them, temporarily breaking the narrow defensive structure. De Jong burst behind his marker and through the gap, and Depay, with ample time on the ball due to the lack of opposing pressure, timed a lobbed pass over the block and into the path of the Barcelona midfielder’s run. In this case, the Dutchman nearly had a considerable goalscoring opportunity, but his first touch was detrimental thanks to Kędziora recovering his positioning just in time. 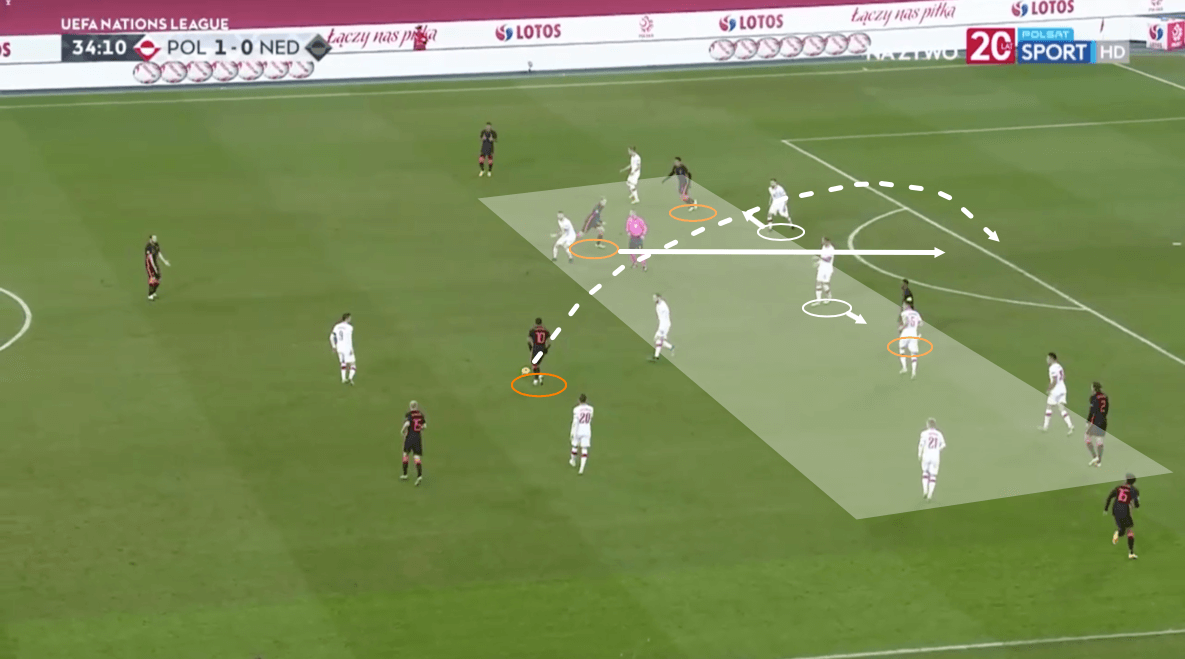 Another method consistently utilised upon analysis was attacking through the available wide areas using passing combinations to take advantage of the wide defenders. In the image seen here, Płacheta attempts to press van Aanholt after he receives the ball from Depay. The Dutch full-back immediately passes forward to Malen, which lures Kędziora wide and out of position. Depay quickly moves into this space, and Malen connects with Depay’s run down the half-space towards the box. Kędziora attempts to recover his position, but it results in a foul suffered by Depay and a free kick in a dangerous area. 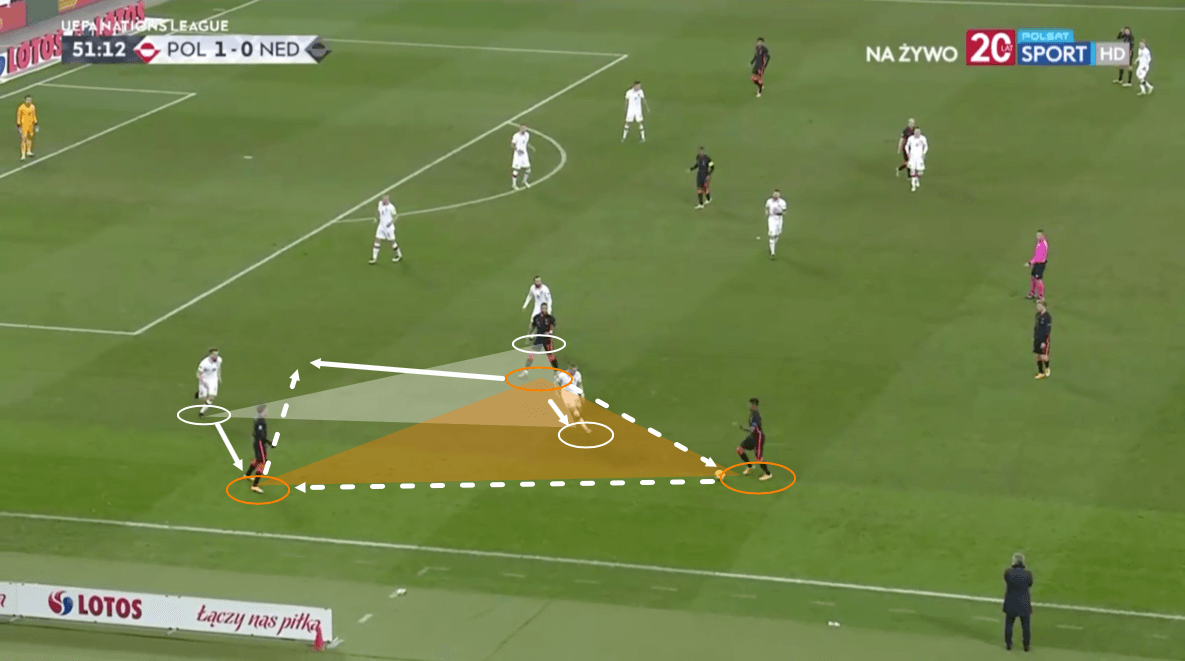 Furthermore, the questionable substitution of Lewandowski at halftime allowed the Netherlands even more advantageous positioning since the opposing attacking threat was diminished. The Netherlands’ various attacking schemes provided a multitude of shot attempts from a variety of areas in the final third, as can be seen in the shot map below. In total, the Netherlands attempted 19 shots, with six hitting the target; far too many allowed for a side as competitive as Poland. 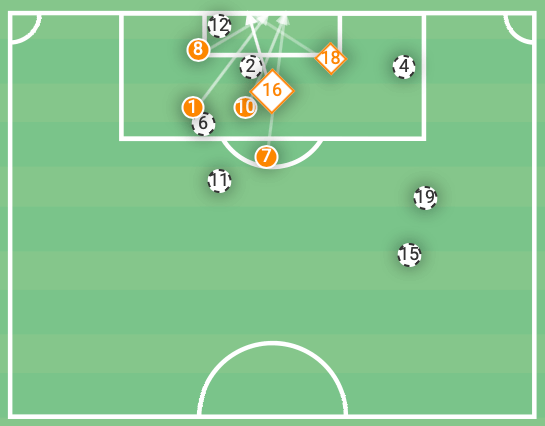 The increase in time spent in the hosts’ half eventually led to a controversial foul and penalty decision later in the second half. Liverpool midfielder Wijnaldum, who had scored an impressive seven of the Netherlands’ previous 13 goals heading into this match, scored the go-ahead goal seven minutes later. On a corner kick, the Liverpool midfielder noticed an area open in front of the near post. Moving there just before the kick is taken resulted in the three nearest defenders closing in to defend the short set piece. However, this included the lone defender aiding in blocking the Netherlands goal, and therefore Fabiański shifted over to cover the near post area of the net. In turn, the far half of the goal was unoccupied, and Wijnaldum’s header careened into that area of the net for the match-winner. 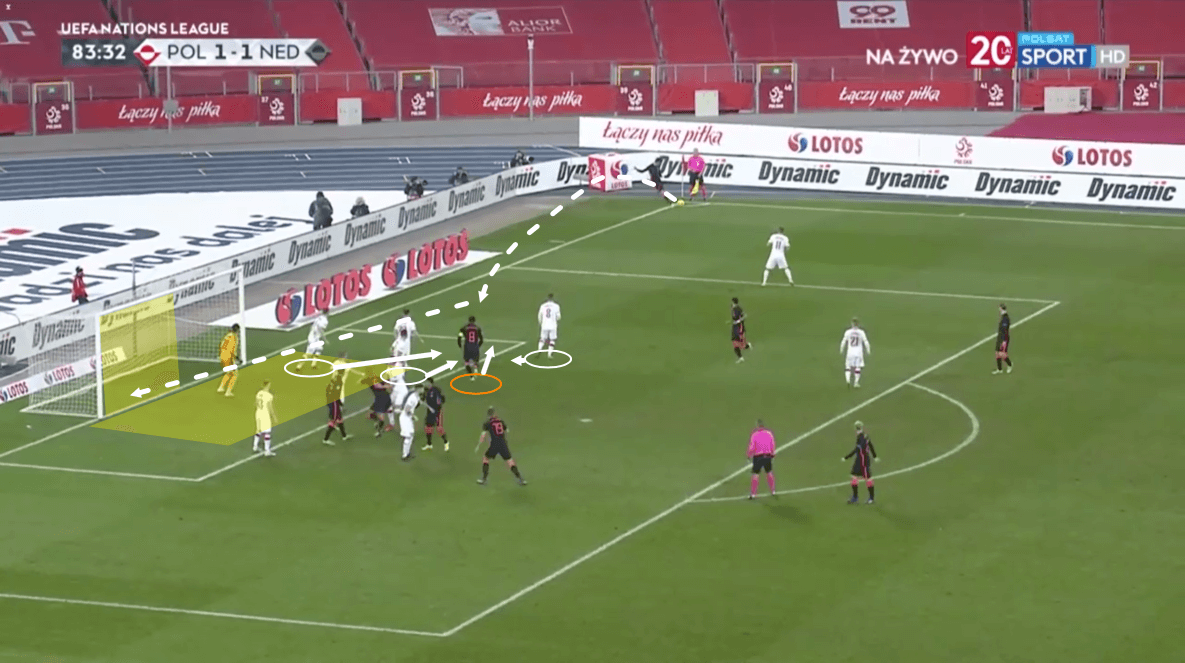 Finally, the match expected goal tally of 0.9 to 2.66 further proved the potency of the Netherlands’ possessive attacking tactics.

Despite warranted concerns of the hire, De Boer has won two matches and drawn three in his first five games as the Netherlands manager. While the tactics are not yet perfected, the more possession-based style of play saw hints of potential in this match, despite the lack of opposing pressure. Brzęczek meanwhile has come under fire recently for making questionable decisions despite strong results as of late. Poland’s more conservative defensive approach, while beneficial to counter-attacking tactics utilising fast wingers such as Jóźwiak and Grosicki, could prove damaging to their possession output.

Ultimately, the match proved irrelevant on the tournament table as Italy confidently defeated Bosnia and Herzegovina 0-2. Regardless, both of these sides will feel eager heading into the delayed European Championships this summer, should it be played.