Getafe have taken La Liga by surprise in the past few seasons with their unique tactics. Their relentless pressing and direct approach is very different from the majority of teams in Spain. However, it’s their goalkeeper, David Soria, that has been involved in the most transfer rumours with the Spaniard being heavily linked to West Ham. The 27-year-old has one of the most direct styles of play in Europe but has also been one of the best performing keepers over the past three seasons.

This tactical analysis will look at whether Soria has the potential to be a world-class goalkeeper. The Spaniard has only just entered his peak and therefore will no doubt improve in coming seasons. We will look at how he compares to other keepers in the top five leagues and what his strengths and weaknesses are.

David Soria’s stats mean that he is beginning to get recognised in the footballing community as one of the current best performers. Throughout the 2018/19 and 2019/20 season, he kept a combined 28 clean sheets. But how does Soria’s shot-stopping stats compare to the top five leagues? 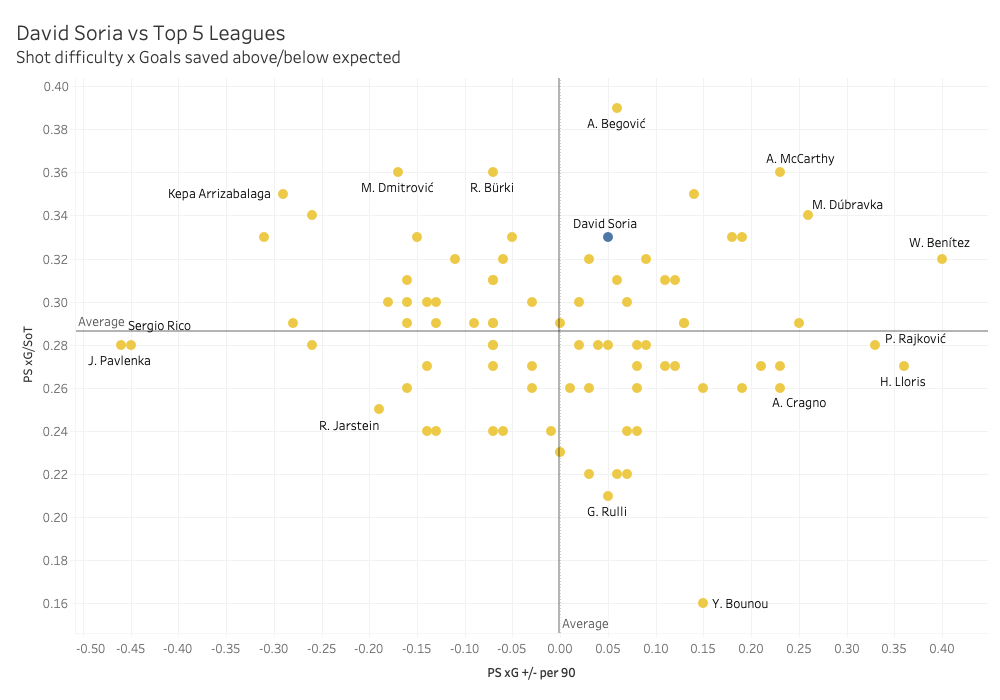 We can see that although he isn’t a stand-out performer he is still above-average in both stats, meaning that he has been one of the better performing goalkeepers in Europe in recent seasons. The shots he faces on average are above the average difficulty (0.33) and he manages to save 0.05 goals per 90.

Although Soria is very capable of saving tough shots from a distance, shots closer to his goal are where he really stands out. His reaction time and good decision-making mean that he is very difficult to beat wherever the attacker shoots from.

In this example against Sevilla, we can see how well he deals with a shot taken within his six-yard box. Soria positions himself on his goal-line to give him the most time possible to react. In the second image, we can see how he opts to spread himself to cover as much as the goal as possible. He ends up saving well with his foot even though the shot is tricky because it’s hit into the ground and bounces up.

However, it isn’t only shots near his body that he’s able to save from close range.

Here we can see how Soria uses his positioning, reactions, and reach to prevent an almost certain goal. The Spaniard is guarding his near post as the cross comes in but can quickly determine where the cross will end up. He sprints across his goal-line and gambles towards his left. Even though the shot is well struck and positioned well from just five yards out, he’s able to prevent a goal with a terrific save.

Dealing with one-on-ones correctly is one of the most challenging abilities for a goalkeeper. It requires quick thinking to make the correct decision and then a good goalkeeping ability to execute it.

Against Real Madrid, Soria prevents a goal by dealing perfectly with Gareth Bale in a one-on-one situation. He engages the attacker slightly and forces him to take it around the keeper. Soria reads this and dives at Bale’s feet whilst making himself as long as possible, meaning the only way he can be beaten is with a chip. The goalie speeds up to match the attacker and gets a firm hand to the ball. 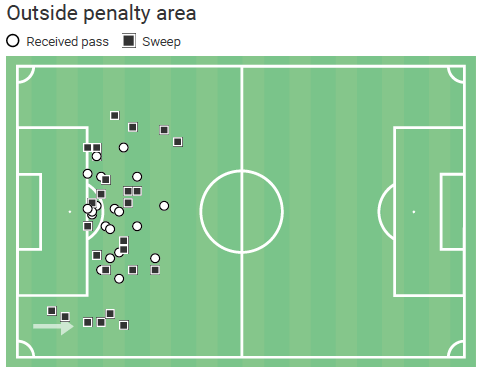 In the above map, we can see how frequently Soria leaves his box to make a defensive action. The Spaniard is very good at defending the space between his goal and defensive line. He makes 1.86 sweeps per 90 and is also very confident at claiming crosses into his box. But how does his stats compare to the rest of Europe? 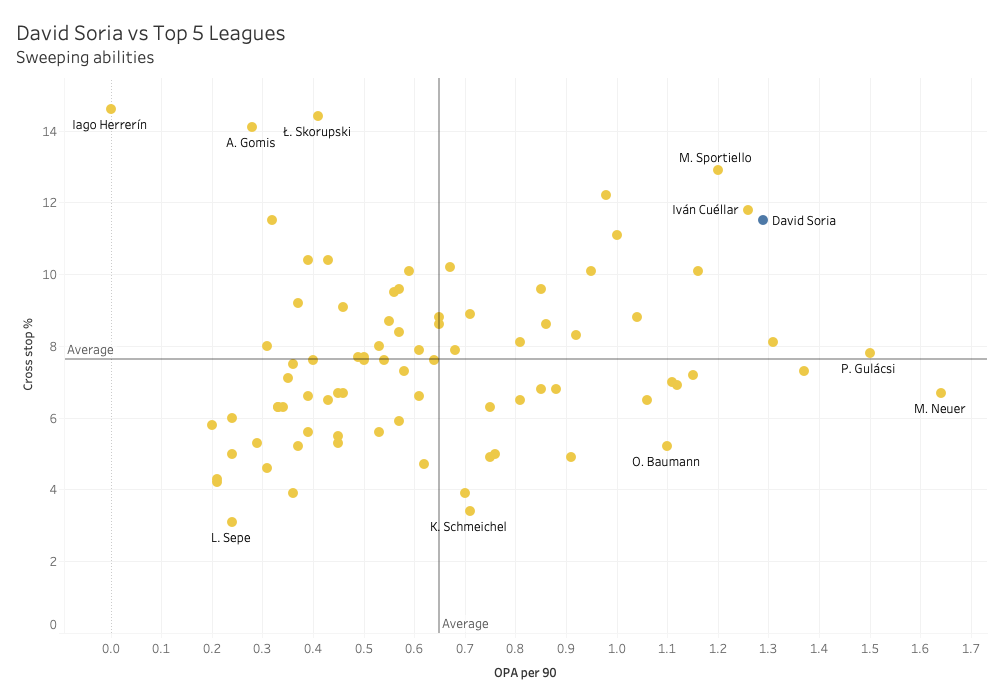 Soria is one of the standout performers when it comes to leaving his goal-line. His stats are higher than average in both areas with 1.29 out of penalty area defensive actions per 90 and he stopped a huge 11.5% of crosses he faced in 2019/20.

In this example against Villarreal, we can see how prepared Soria is to come out of his box to deal with attackers. He always has a very advanced position whilst the opposition are in possession. This allows him to beat opponents to the ball when they get in behind the Getafe defensive line. His decision-making and speed mean that he rarely misjudges a defensive action outside his penalty area.

As well as leaving his box to help out defensively, Soria is also one of the best at stopping crosses into his box.

As we can see in the example above, Soria is very confident when it comes to dealing with crosses. His 6’3 height helps him claim balls high above his opponent’s heads. Soria likes to deal with any cross that he feels he can reach to help his defence. However, he isn’t without fault. The Spaniard has been known to misjudge the flight of crosses and get beaten to the ball by the opposition.

His ability to claim balls also helps him set his team on counter-attacks. Soria has an xG Chain of 3.58, one of the highest in La Liga. Getafe’s tactics mean that they rely heavily on sitting back and breaking quickly when they gain possession of the ball.

Above is a prime example of how Soria looks to start attacks as soon as he receives the ball. After claiming a cross, the 27-year-old instantly looks to his attacking players for an outlet. He identifies space on the left and hits a great pass into the path of his teammate. With Getafe often playing with two players in attack, Soria has plenty of options to start a counter-attack.

This direct style of play is also reflected in his passing.

The most direct goalkeeper in Europe

The sub-heading is not at all misleading. Soria is, in fact, the most direct passer in all of Europe, as is evident in the graph below. This analysis will explain why. 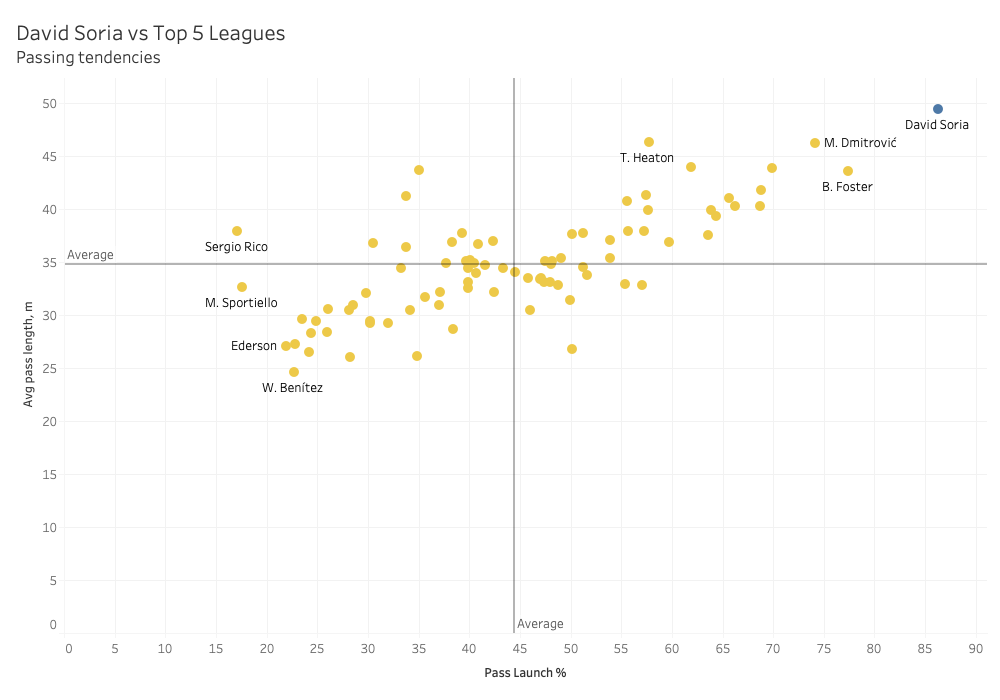 We can see that Soria has the highest value in both stats. The Spaniard launches 86.30% of his passes and has an average pass length of 49.46m. His passing style is reflected in his team’s tactics, with a fast build-up preferred.

In this example, we can see how Soria selects a more direct pass rather than three simpler passes that would ensure that Getafe retain possession. Although this appears very ‘anti-football’ of Soria, he is following his team’s tactics.

Last season, he only made 14.04 passes per 90 with 12.82 of these being forward passes. Although it’s clear that Soria has a very unique style of play, the question remains, is it effective?

Although the Spaniard prefers to pass long, he is very good at it. Only 46.51% of his long passes are followed by a duel, meaning he is a very accurate long passer. As we can see in the image above, Soria passes the ball roughly 50 yards to accurately hit his teammate on the head. He uses a driven pass to get it to the Getafe man as fast as possible.

However, the question remains whether he can fit in at a team that prefers to keep possession. He does have a short/medium pass percentage of 92.5%, which does bode well.

This scout report has shown why David Soria receives such high praise at the moment. Playing for a smaller club like Getafe means that he doesn’t get as much attention as other keepers. Still, at the age of 27, he has plenty of time to prove himself as a world-class goalkeeper. However, he will need to attract the attention of bigger teams in Europe.

His shot-stopping abilities mean that he rarely concedes goals from close range and rarely makes mistakes. His sweeping skills are some of the best in the top five leagues and he is an asset to his team creating counter-attacks. However, his passing tendencies mean that a lot of Europe’s top teams will not be attracted to him, as we’ve seen recently with Manchester City.