RB Leipzig were not been able to use the slip-up by FC Bayern in order to catch up to them. On Saturday evening, the Saxons came out only to a 1-1 (1-0) in Frankfurt and missed out on points that could have been used to catch up with the record champions, who had previously drawn against Bremen. The Frankfurt goal by Aymen Barkok (43rd minute) was later equalised by Yussuf Poulsen (57th). This means that Leipzig remain without a sense of achievement in Frankfurt. Eintracht achieved respectable success against the Champions League participants in this match, but they still remain without a win for the fifth game in a row.

This analysis will show how Adi Hütter changed his tactics in order to draw against the Champions League participants. This tactical analysis will also examine how RB Leipzig struggled to play their usual game.

Eintracht coach Hütter had caused a surprise before kick-off when he mixed up the starting line-up. As the Austrian had hardly ever rotated in the season so far, he brought in five new players from the start against RB Leipzig and helped Erik Durm, Djibril Sow, Evan N’Dicka, and Aymen Barkok make their starting eleven debuts this season. Julian Nagelsmann made four changes ahead of the Bundesliga clash. 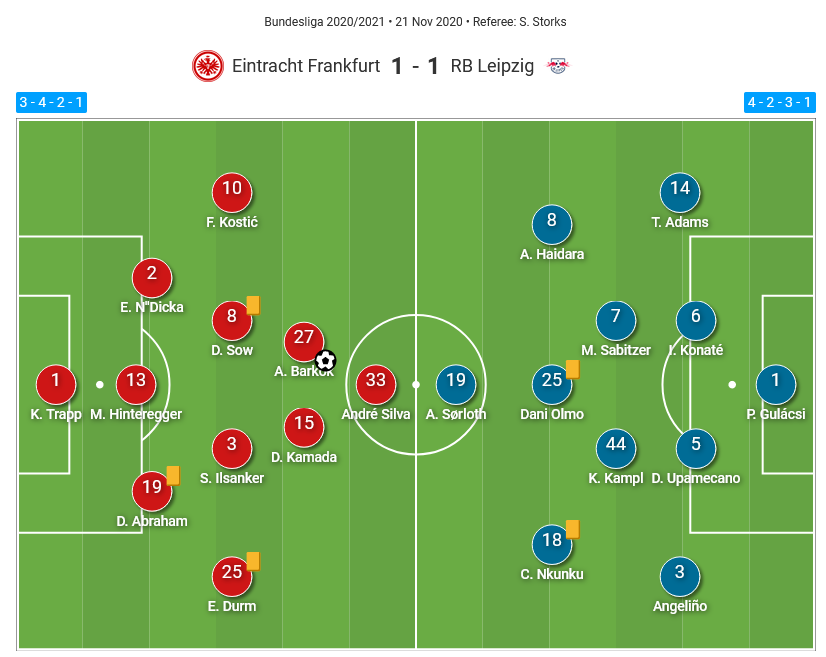 Straight from the beginning, it was a very balanced match between the two teams that wanted possession. If they were without possession, they pressed high up the pitch in order to force the opponent to make mistakes.

RB Leipzig´s forwards pressed high up the pitch and even within Frankfurt´s penalty box. Centre-forward Sorloth even pressed Frankfurt´s goalkeeper Kevin Trapp. Most of the time, Leipzig´s midfield line dropped too deep instead of pushing high to support their first pressing line. 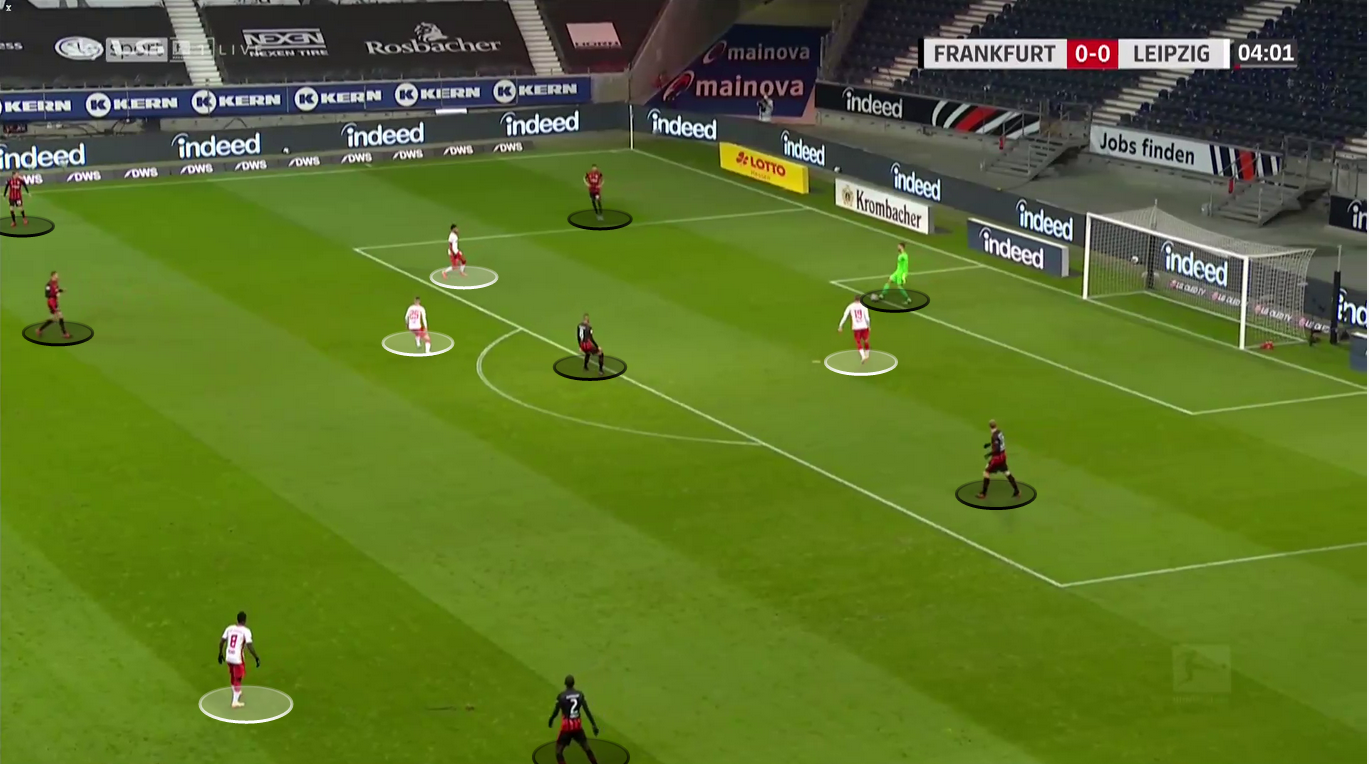 Frankfurt also pressed high but they did a better job. Not only was their first pressing line very active, but even the midfield and defensive lines pressed extremely high as well in order to form a compact shape.

As we can see in the image below, Leipzig were only able to have a numerical superiority because of the goalkeeper Gulasci who had no direct opponent. This is why Leipzig struggled to build up their usual combination play from the back. 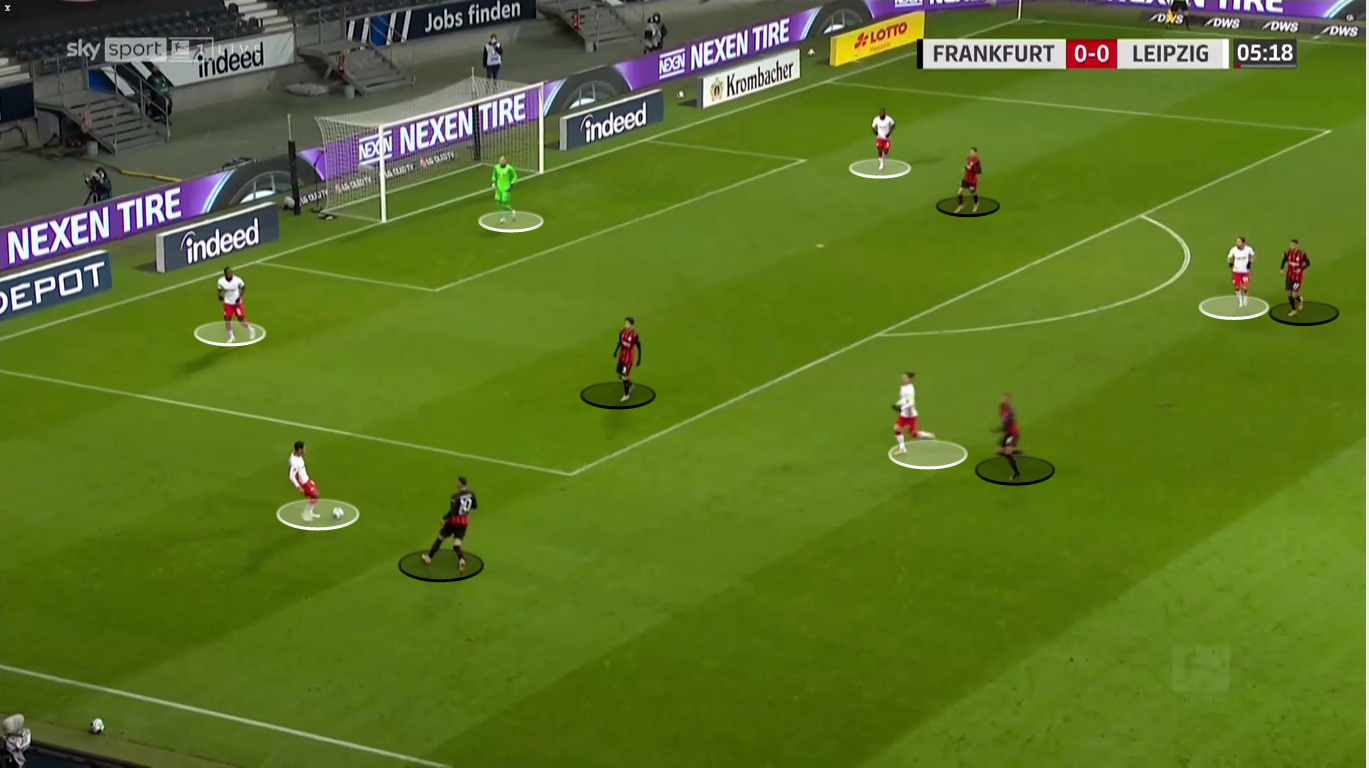 When Leipzig were able to overplay the first pressing line, Frankfurt tightened up the space in the central areas of the pitch so Leipzig could not play their vertical passes. The Hessians granted Leipzig very little room and managed to keep the dangerous offence from rolling.

In the image below, we see how Frankfurt´s midfield dropped back and even the wingers supported in the central areas. 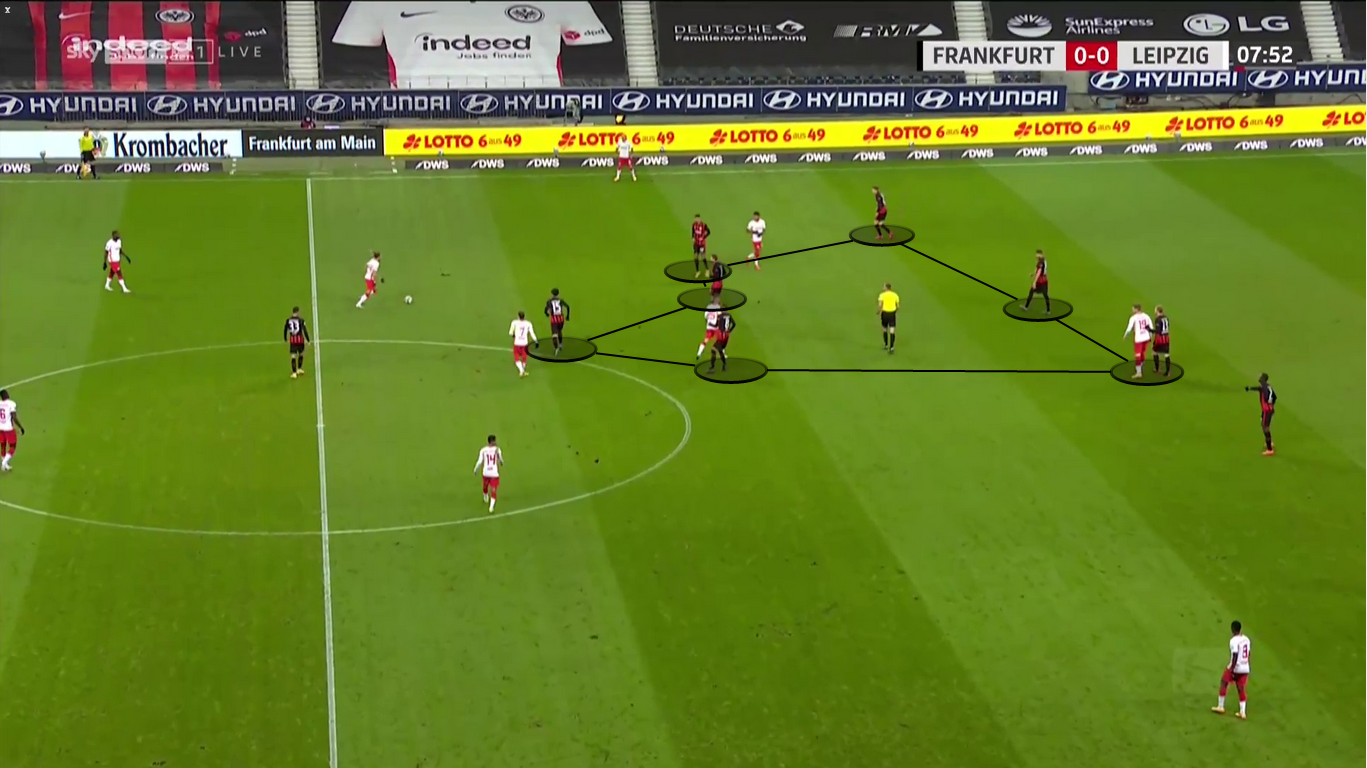 Leipzig tried to break that compact space by playing vertical balls out on the left wing. With Angelino, Leipzig have one of the most offensive full-backs who always tries to support the attack. Nagelsmann tried to adapt their playing style in order to create goal-scoring opportunities through the left wing.

In the following image, Frankfurt´s midfield again tightened up space in the centre. At the same time, this procedure opened up space on the left wing. Upamecano plays a long-range diagonal ball to Angelino to iniciate a goal-scoring opportunity. 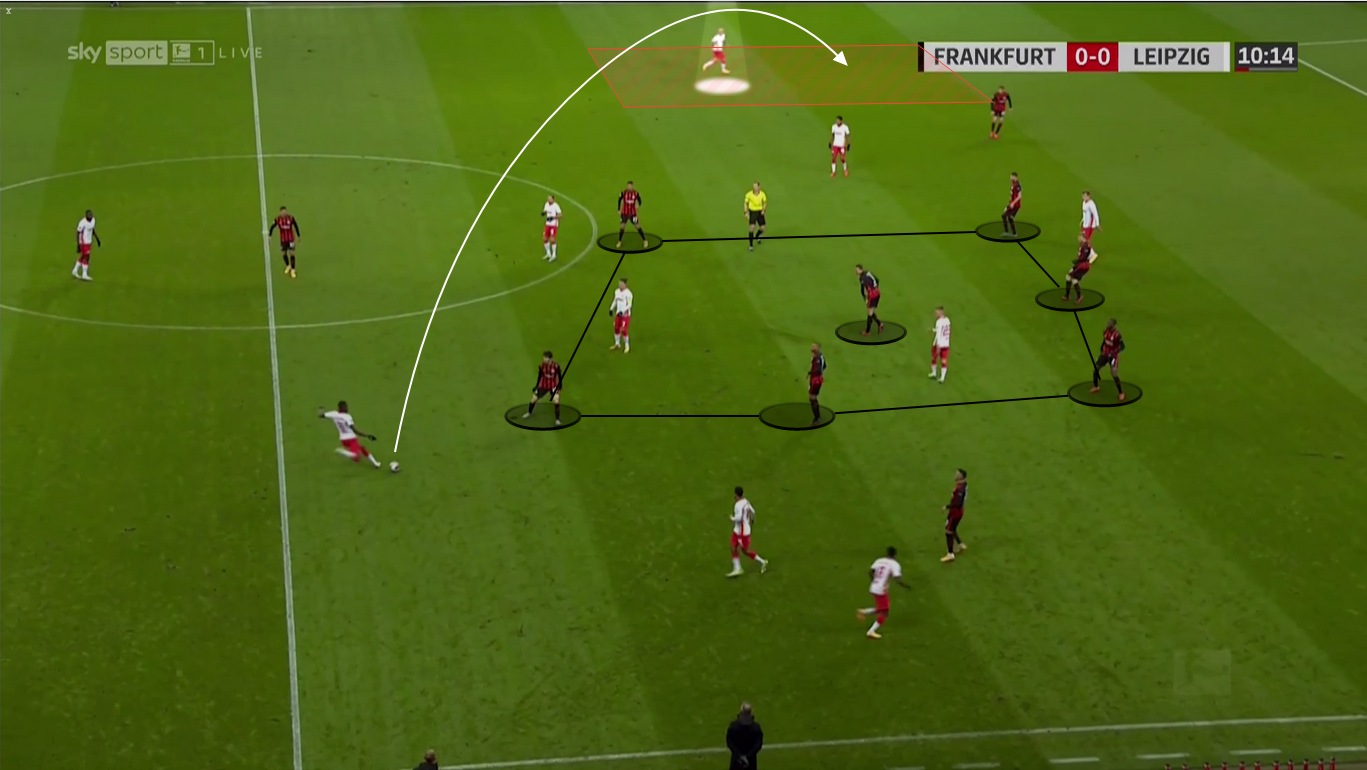 As already mentioned, Hütter surprised most fans with his line-up. The use of Durm in the right-back position was especially unexpected. In the end, Hütter´s match plan turned out well. With Frankfurt´s midfield tightened up space in the centre, Leipzig had no other choice other than playing on the wings. By lining up Durm and Kostic, Hütter anticipated this procedure already ahead of the match and was able to implement a very flexible team. In the defence, which varied between a back-four and back-five depending on the situation, Eintracht were much more compact compared to their shape in the previous weeks.

In defensive transitions, Frankfurt built a back-five using Durm and Kostic as wing-backs to protect not only the central areas, but also the wings. Their formation in these defensive moments was a 5-2-2-1. 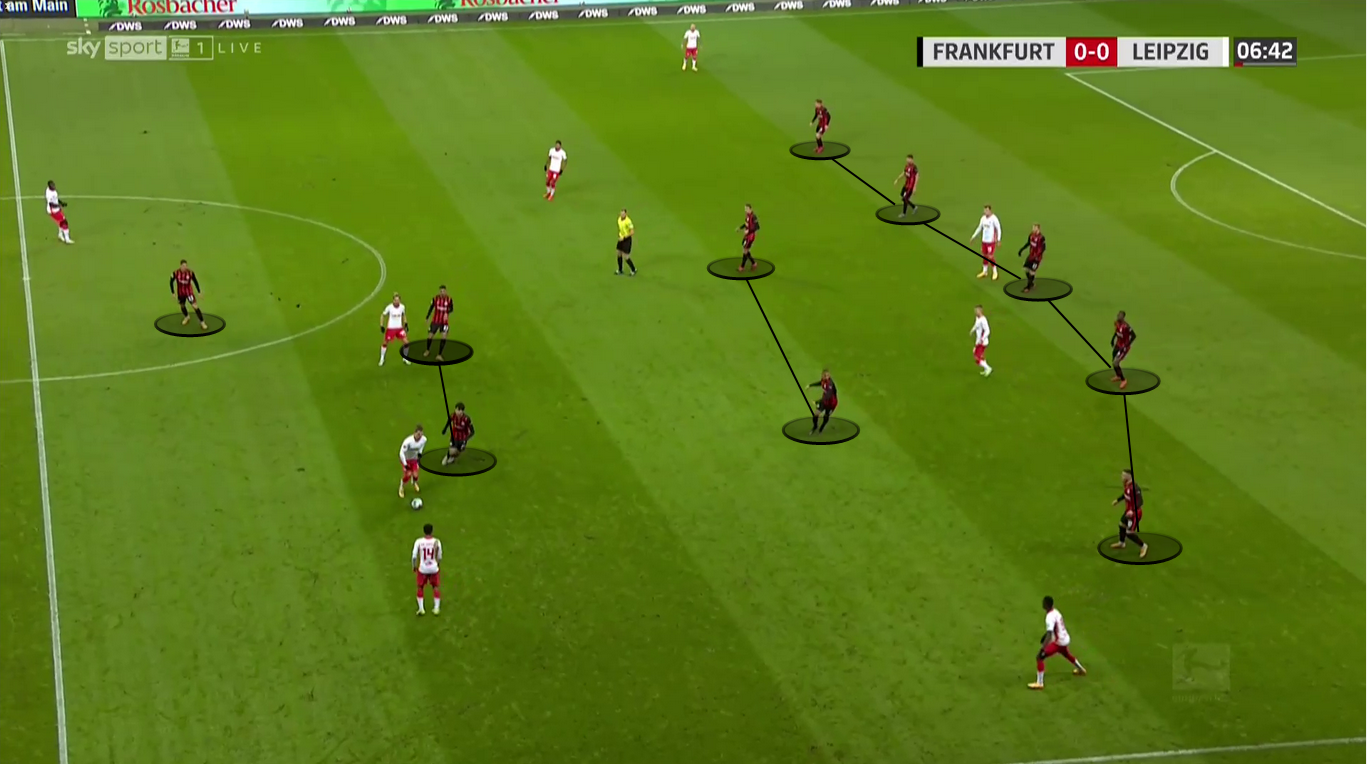 In the build-up, Frankfurt played with a back-four with full-backs that stayed remarkably high. This stretched Leipzig´s pressing lines and opened up space on the wings as well as in the central areas for Frankfurt´s central midfielders. Frankfurt played in a 4-2-3-1 formation with Durm as right-back and Kostic as a left midfielder. 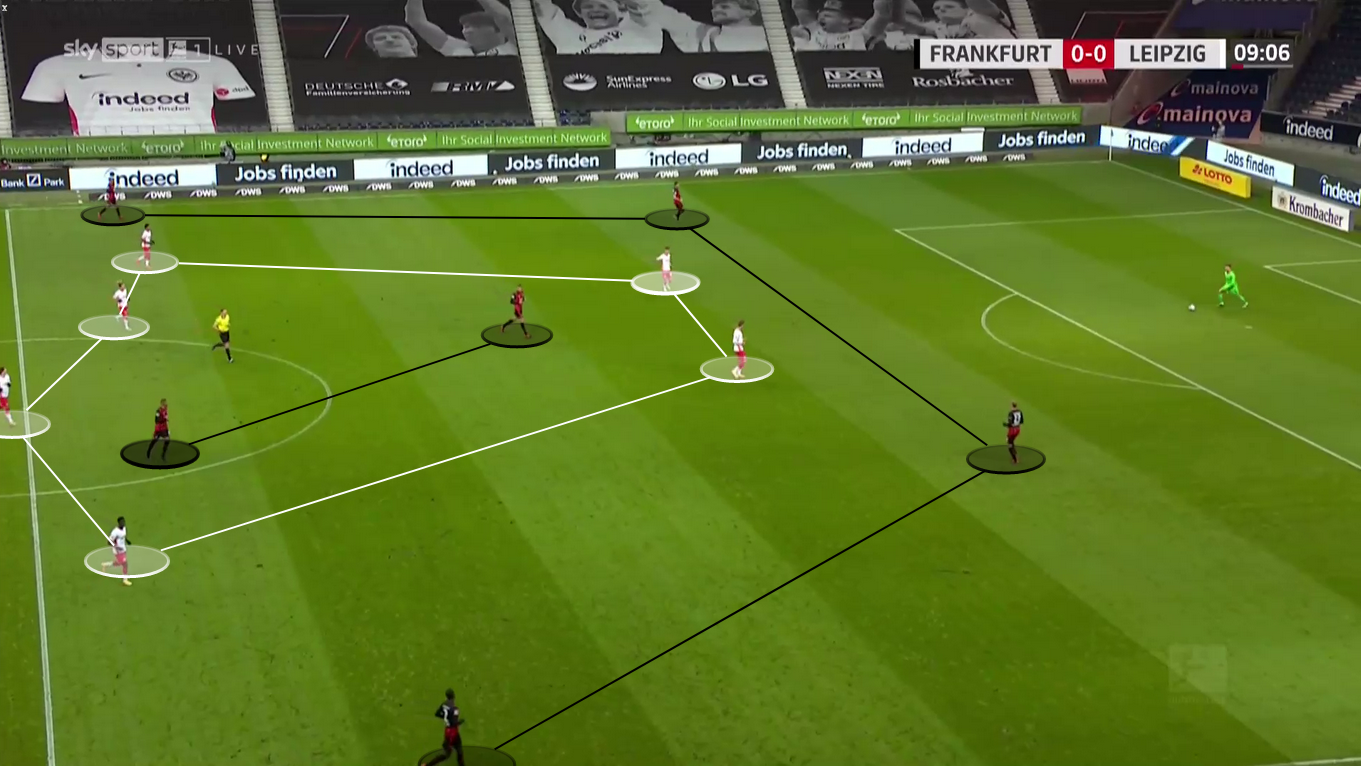 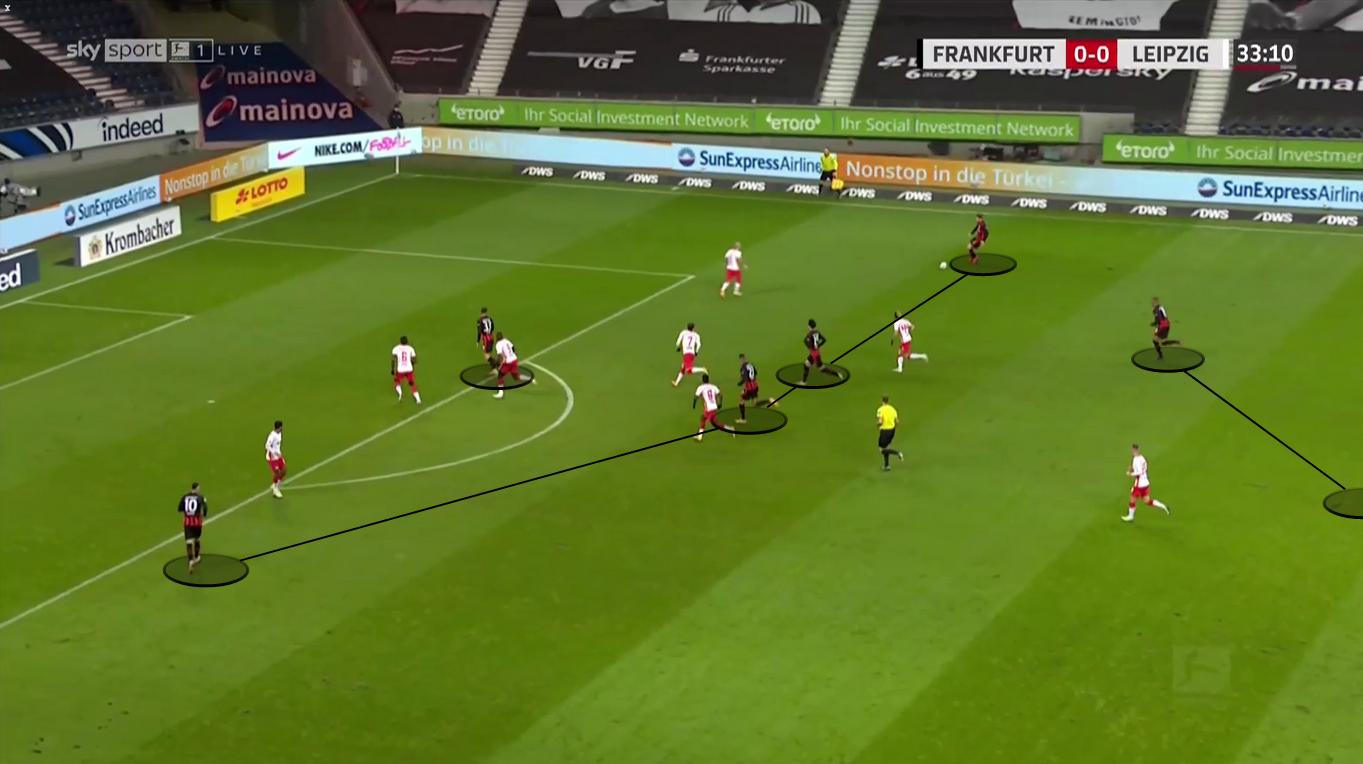 With Kamada and Barkok in the half-space, Frankfurt were also able to play the ball into these half-spaces using long-range passes from the back. In this way, Frankfurt scored their goal as well.

In the image below, we can see Hinteregger in possession. He plays a long-range pass into the half-space where Kamada and Barkok were able to turn and progress the ball into dangerous areas. 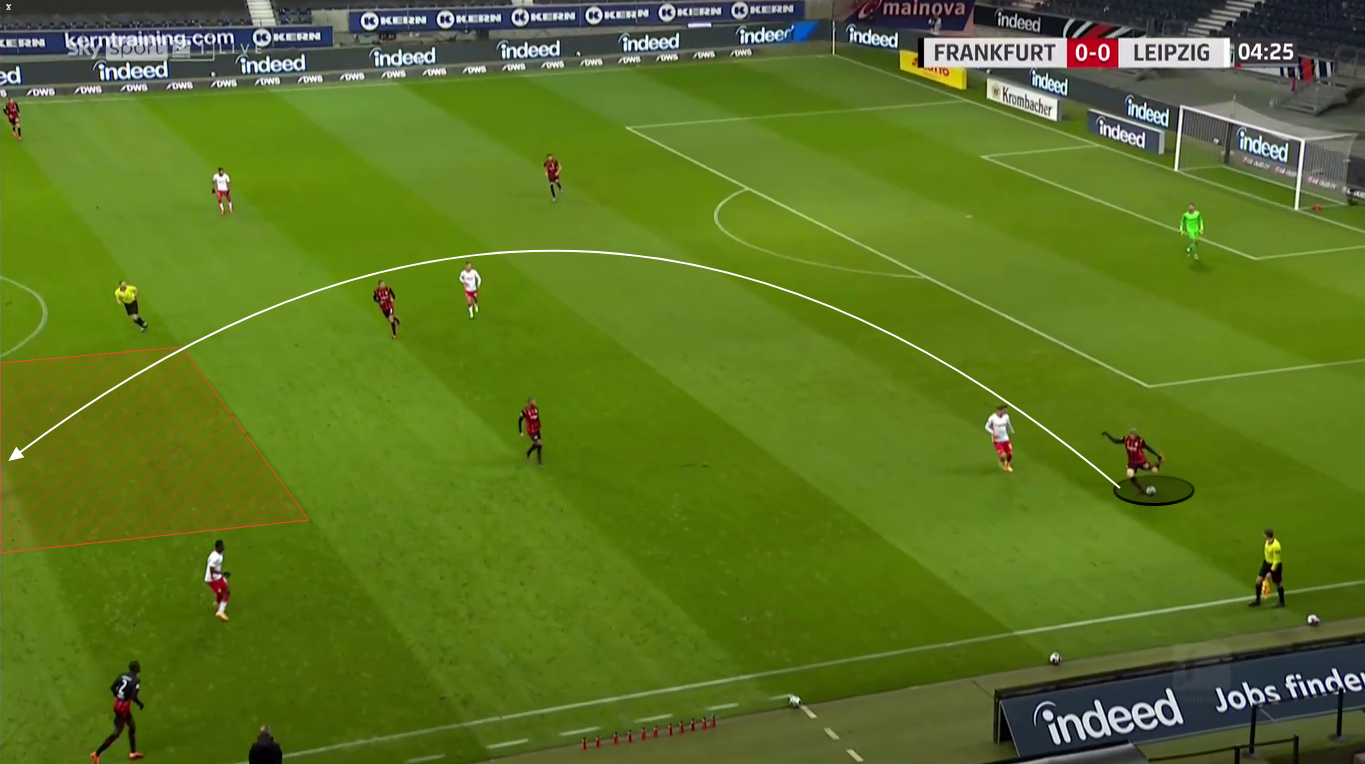 Frankfurt played in a very disciplined manner and used their flexibility to switch between offensive and defensive transitions wisely. Hütter earned the benefits of his courage. RB Leipzig did not struggle to find ideas, but they did not use their opportunities. In the end, Leipzig did not bring out their best performance while Frankfurt had a particularly good match. The 1-1 draw was of outstanding merit and emphasised how tight the match was, ass had been expected.