The Olympiastadion held an exciting tie between two Bundesliga sides, Hertha Berlin, and Borussia Dortmund. This tactical analysis will take a deep dive into the game that finished 5-2 to the away side.

Hertha, led by Bruno Labbadia, currently position themselves in 13th place, eight games into the new season. They are a side who look lethal going forwards, with Matheus Cunha scoring at a particularly dazzling rate, but their defence lets them down too often. In this analysis, we will discover how Labbadia’s tactics resulted in such a chaotic rear-guard against Dortmund.

Dortmund, managed by Lucien Favre, have had an electric start to the Bundesliga campaign. Heading into this game, they were looking to recuperate after the international break and a 3-2 loss to Bayern Munich just before that. This analysis will explore how they managed to open up Hertha’s defence with frequency. 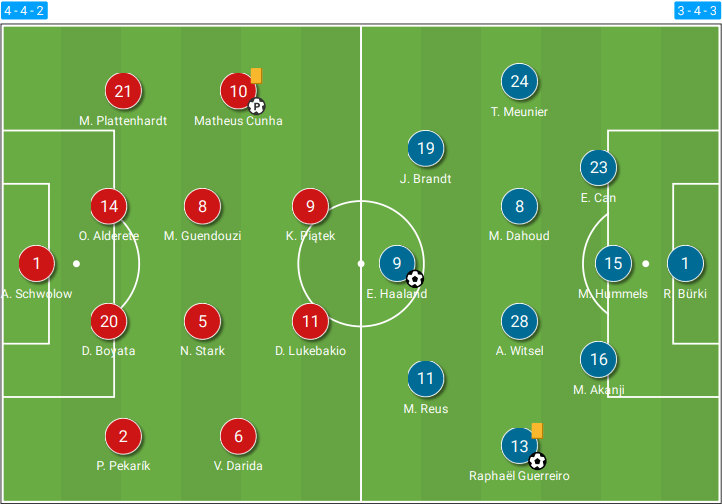 Labbadia had a couple main injury issues to contend with for this game, namely Jordan Torunarigha and Jhon Córdoba. Torunarigha is an especially tough pill to swallow, consider the level of defender he is growing to be, after suffering from injury setbacks in the past. This is the first time this season that Labbadia went with a 4-4-2 formation, so it was interesting to see a more traditional approach from the German coach.

Favre endeavoured with his favourite 3-4-3 formation for this game, while also still opting to play former Liverpool midfielder Emre Can as the outside centre-back in a back three, which we have often seen this season. Mahmoud Dahoud continued his revitalisation this term with another start in the centre of midfield. Brandt started off this game on the right of a front three, symptomatic of his utility to play in many areas of the field.

Labbadia has coached each player into occupying certain areas of the pitch. By occupying the positions and moving within the allocated area, it is ensured that all channels are occupied and passing lanes will automatically be created. In this game, they played a 4-3-1-2 out of possession, but when a turnover in possession occurred, this would become a 2-5-1-2.

The full-backs would push higher, forcing the wide midfielders inside, and Piątek would lead the line with Lukebakio and Cunha in support. Cunha would regularly drop into the #10 space, while Lukebakio would move into the channels and provide the direct option via his size and athleticism. 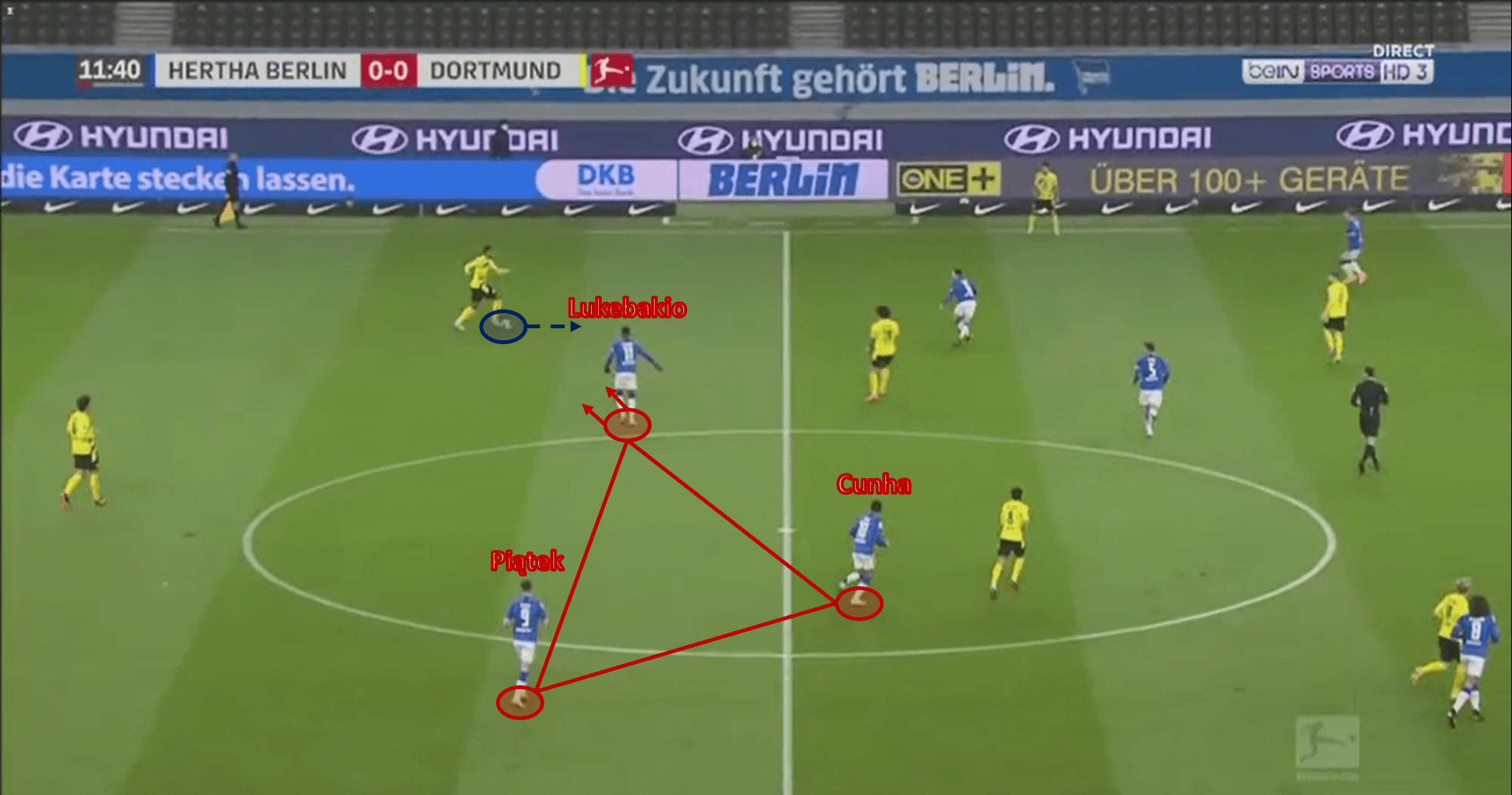 Here, we see Dortmund in the build-up phase of play, up against the attacking triangle created by Hertha’s men. Labbadia does not instruct his forwards to be as tireless in their pressing in comparison to Dortmund, however. 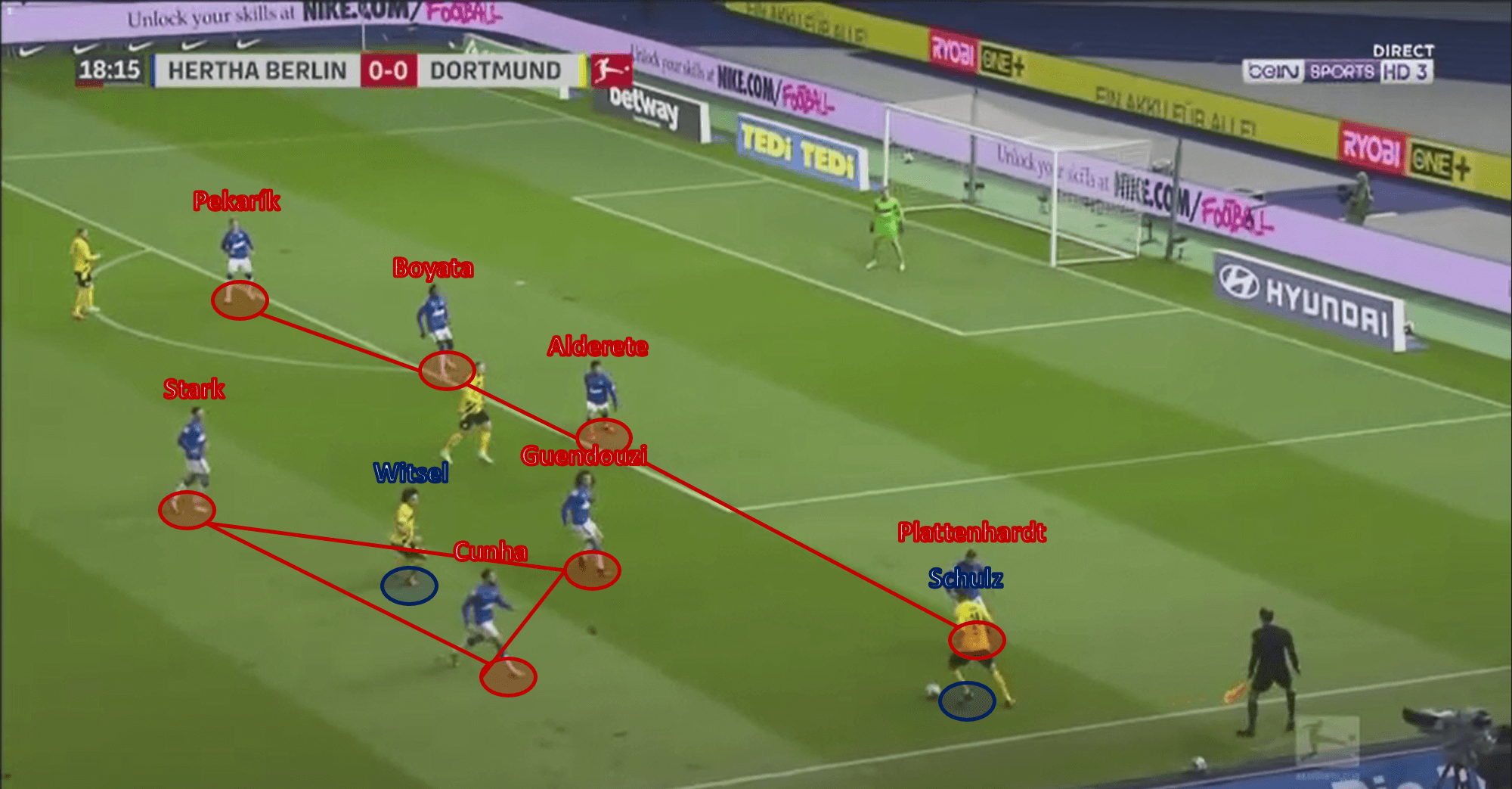 Schulz, operating on the right-wing, has limited passing options thanks to Hertha’s setup. Cunha has dropped back to join Hertha’s midfield and aims to box out Witsel as a passing option.

In the first half, Dortmund struggled to create many threatening chances. Labbadia’s men fulfilled their roles well in cutting off passing lanes and keeping a stable defensive structure intact. Dortmund’s main form of chance creation came via their ability to hit Hertha on the break, and this method generated a couple decent chances in the first half, but nothing too substantial.

Going forwards themselves, Hertha created even less than their opponents. Despite scoring by virtue of a fantastic Cunha long-range strike, all of their efforts in the first half represented little value in terms of xG. None of the first half efforts breached an xG of 0.05. This did at least somewhat improve in the second half, with a far clearer tactical identity in place. 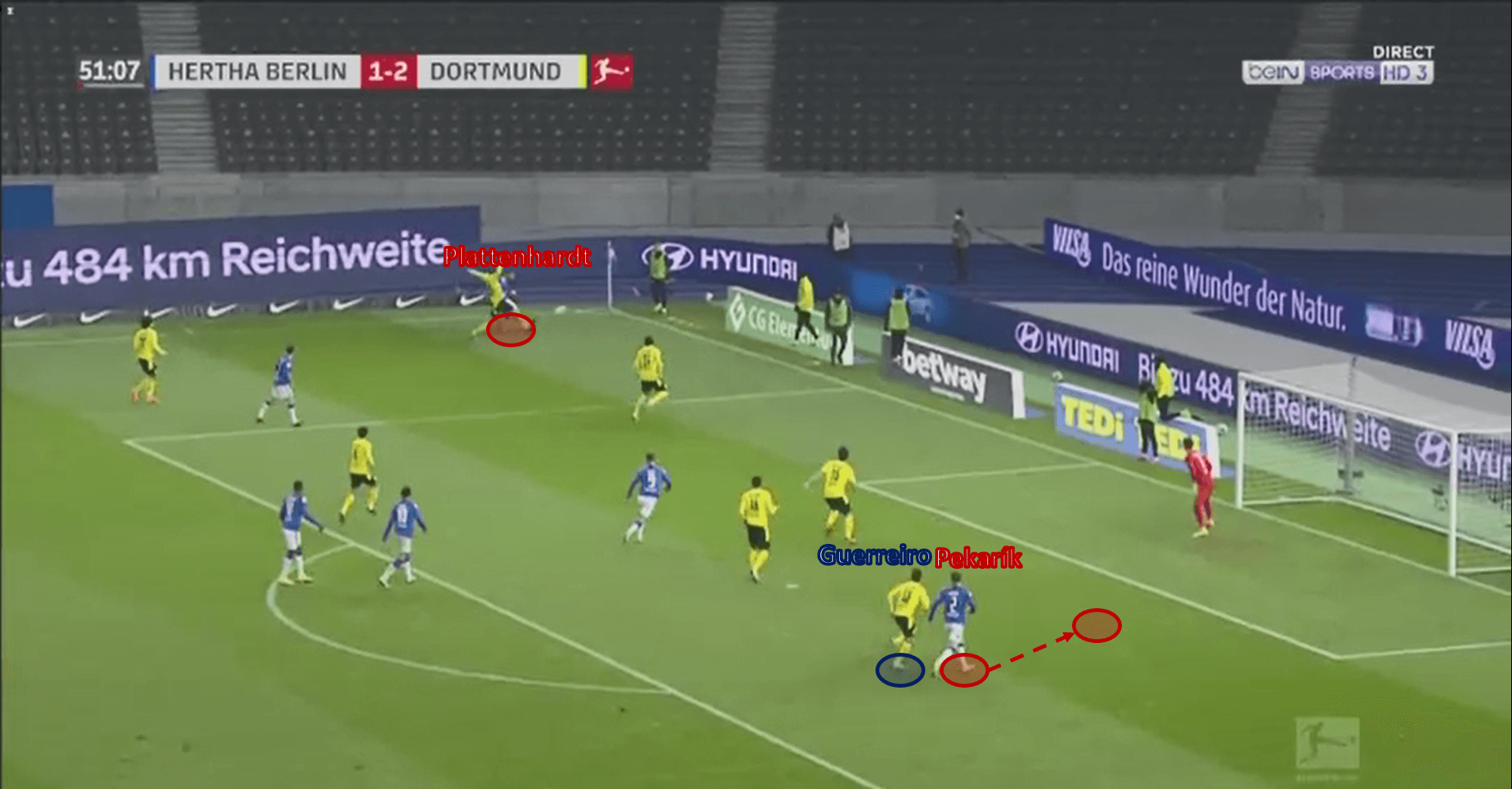 Plattenhardt down the left-wing was a constant threat throughout the ninety minutes, and here he sends in a floated delivery to his opposite full-back, ghosting in behind, Pekarík. 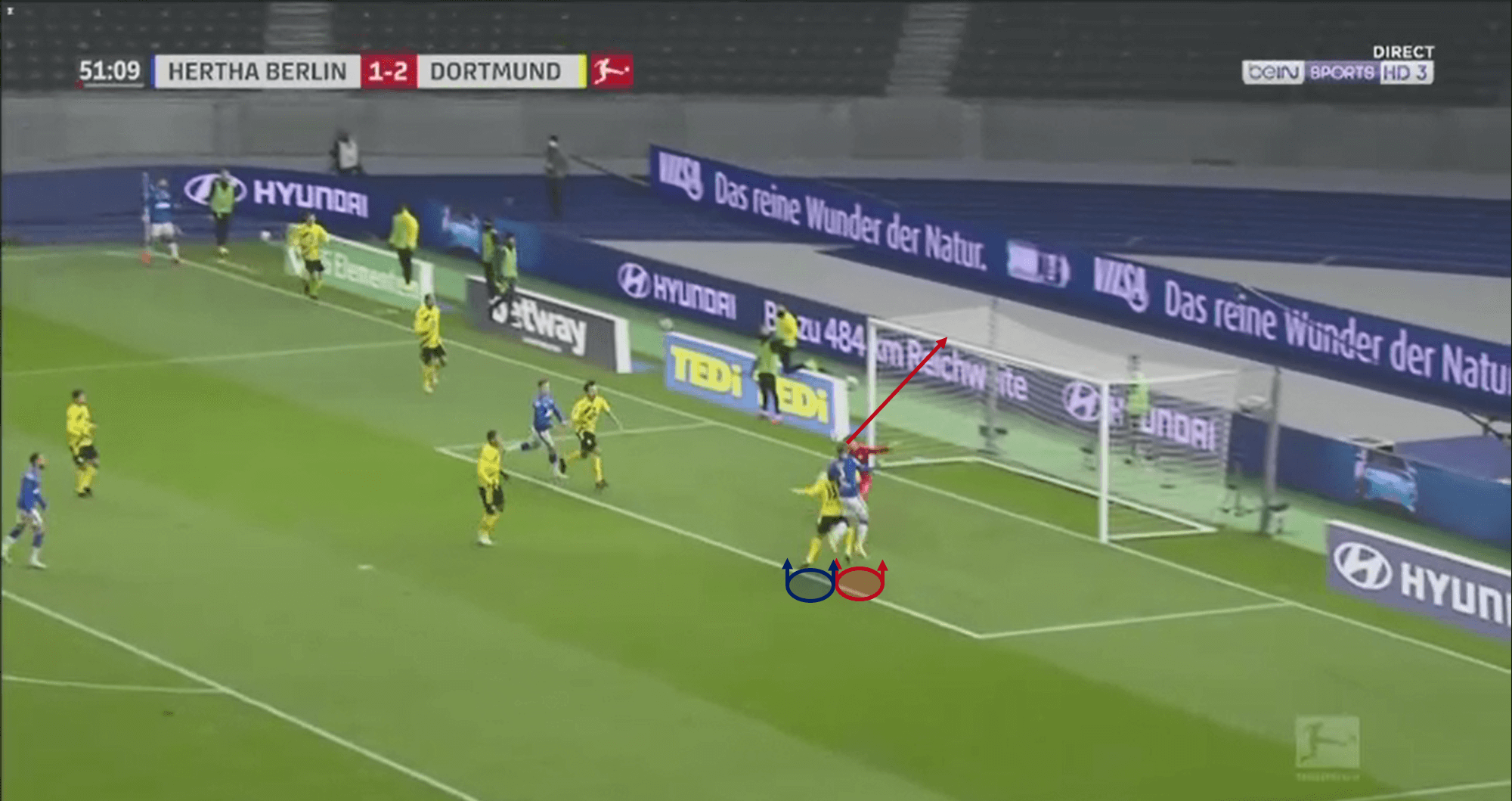 Pekarík reaches the ball before Guerreiro, but he is still pressured enough to send the ball over the bar.

This was one of the few chances generated down the wings by Hertha, as they focused much of their play down the core of the pitch. Their aim was to generally play the ball into the feet of Cunha, who would either use his strong dribbling ability to drive Hertha into the final third, or the Brazilian would combine with his attacking teammates in an effort to create space. Cunha inevitably got frustrated with the lack of success in this regard and took long shots where he could, to force the pressure, but to little triumph. 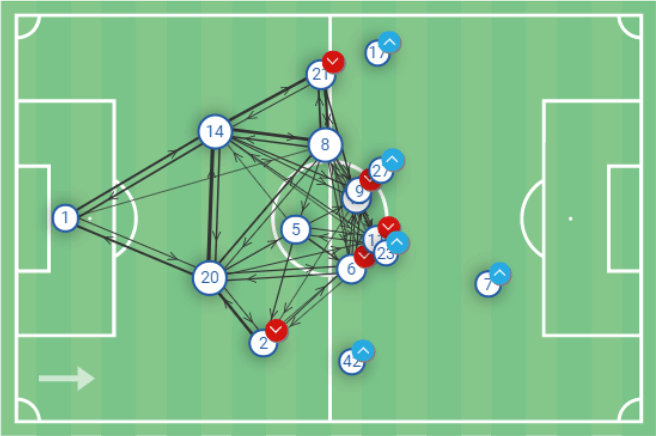 When utilising the 3-4-3 system, so much of Dortmund’s play is focused down the wings, where both wing-backs can interplay through quick one-two passes with their attacking teammates. On the left, Guerreiro operates in an inverted wing-back role, similar to the one Angeliño has been playing at RB Leipzig this term.

A very tactically aware footballer, Guerreiro is constantly seen running up and down the left flank, but in the final third he will position himself centrally to get on the end of a Dortmund attack, that has begun on the right side of the pitch. 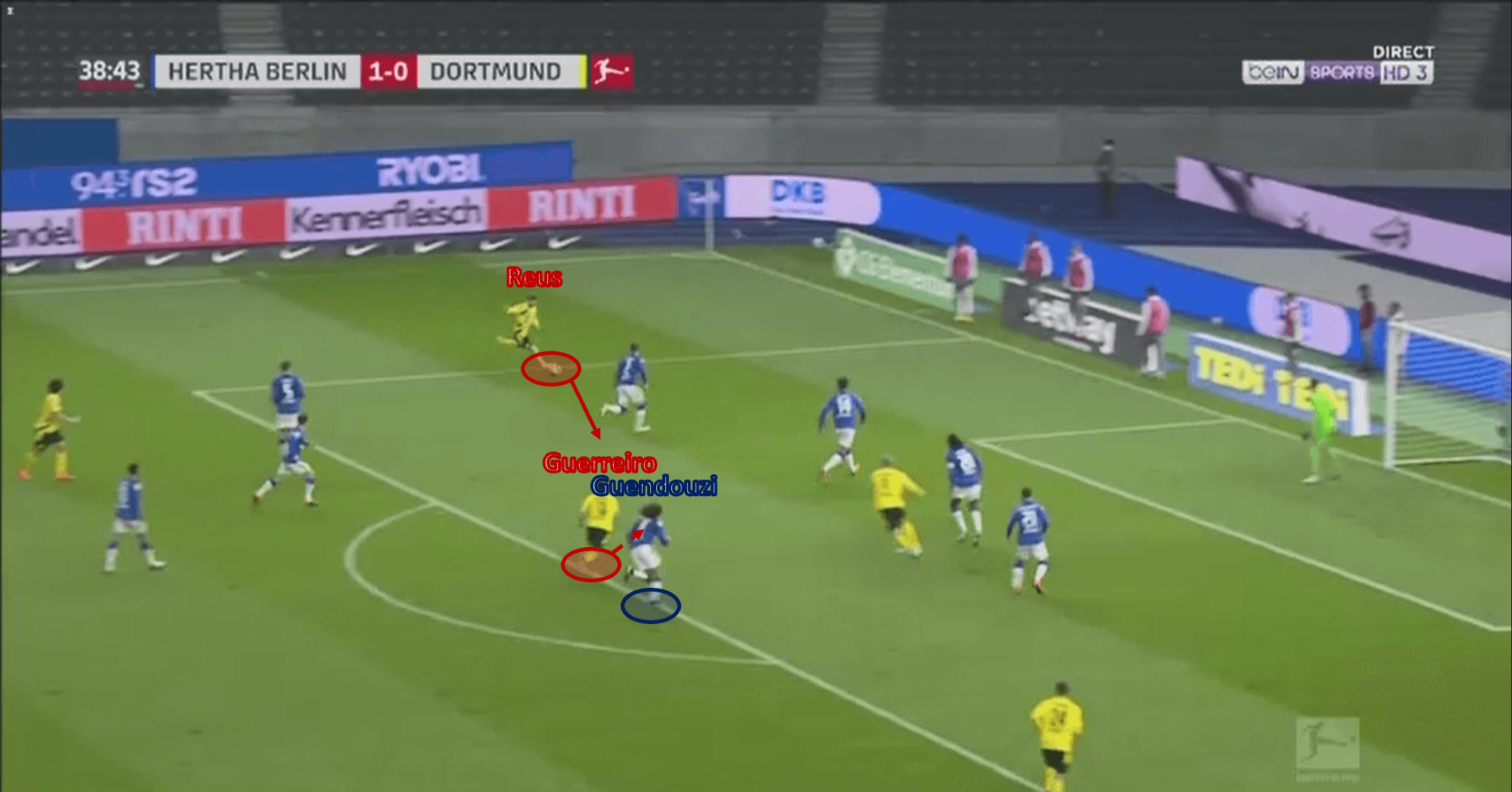 Guerreiro’s movement goes unnoticed before he makes the run into central space, where Guendouzi clocks onto his run. Only a dodgy bounce in this scenario prevented a decent opportunity on goal. 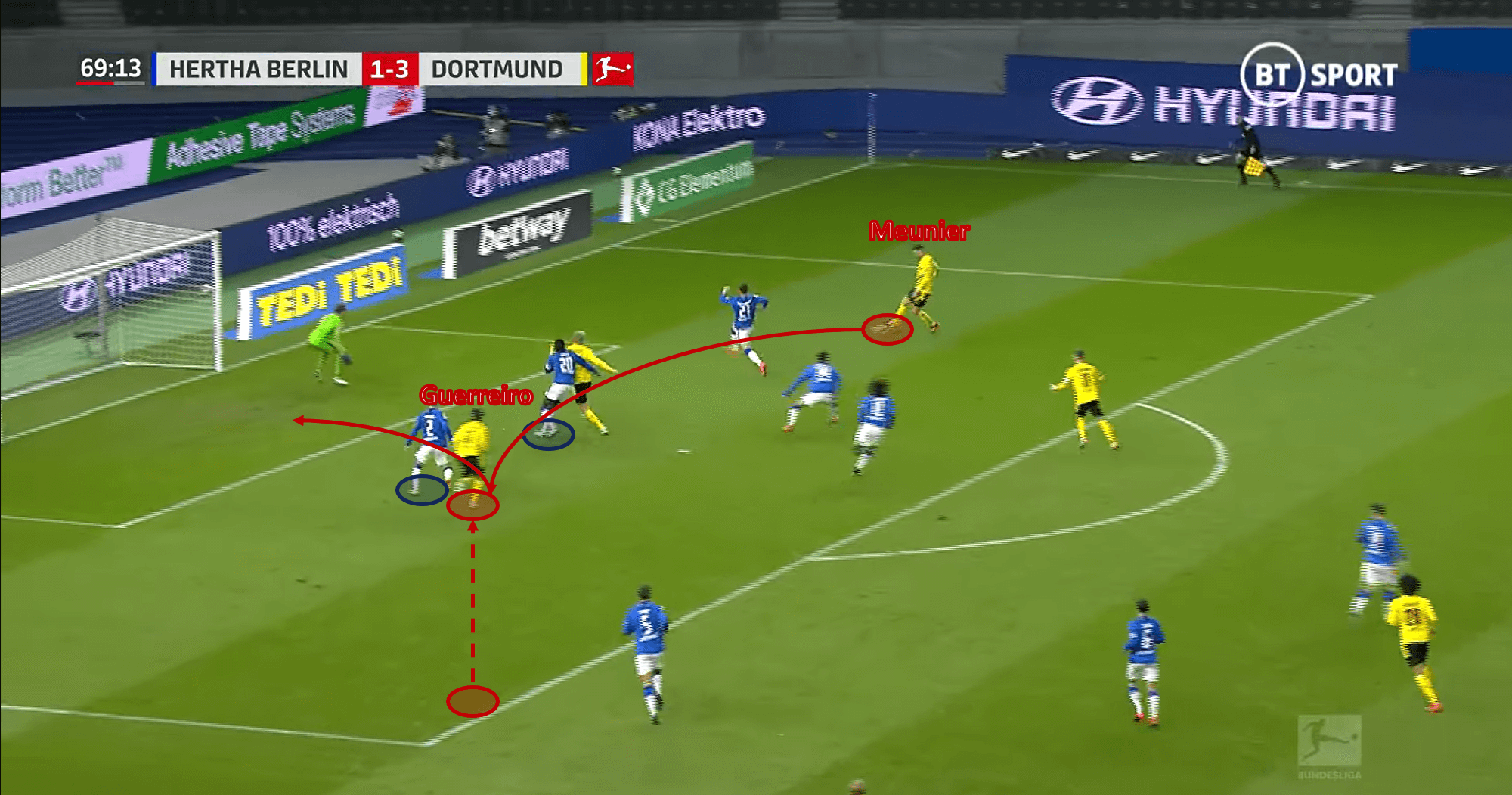 Meunier on the right wing enter the penalty area with the intention of finding Guerreiro’s late run into a central area, which he does, and it results in a goal to Dortmund.

The Portuguese, for the majority of the match, operated down the left half-space, where he acted as a passing option in build-up play, moved out wide from here to stretch the defence, or made one of the infield runs that we covered. He was excellent, generating an xG of 0.59, and completed four dribbles to boot, adding to the unpredictability of his skillset. 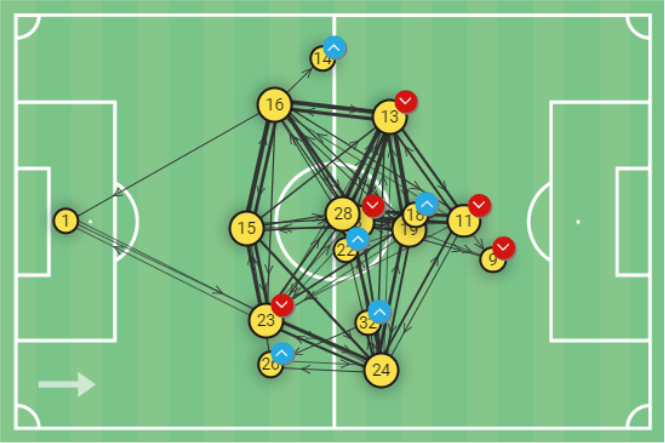 On the other side of the pitch, Meunier operated in a slightly different role as a wing-back. As we can see in the pass map above, Meunier looked to stretch the opposition defence more regularly, to then use his strong crossing ability.

The Belgian is adept at either completing cutbacks from the byline or sending in early low-driven angled deliveries in towards the six-yard-box. We saw this in his assist for Guerreiro’s goal. He also positioned himself smartly to act as a facilitator in build-up, constantly playing the short passes to keep up the tempo in the final third. 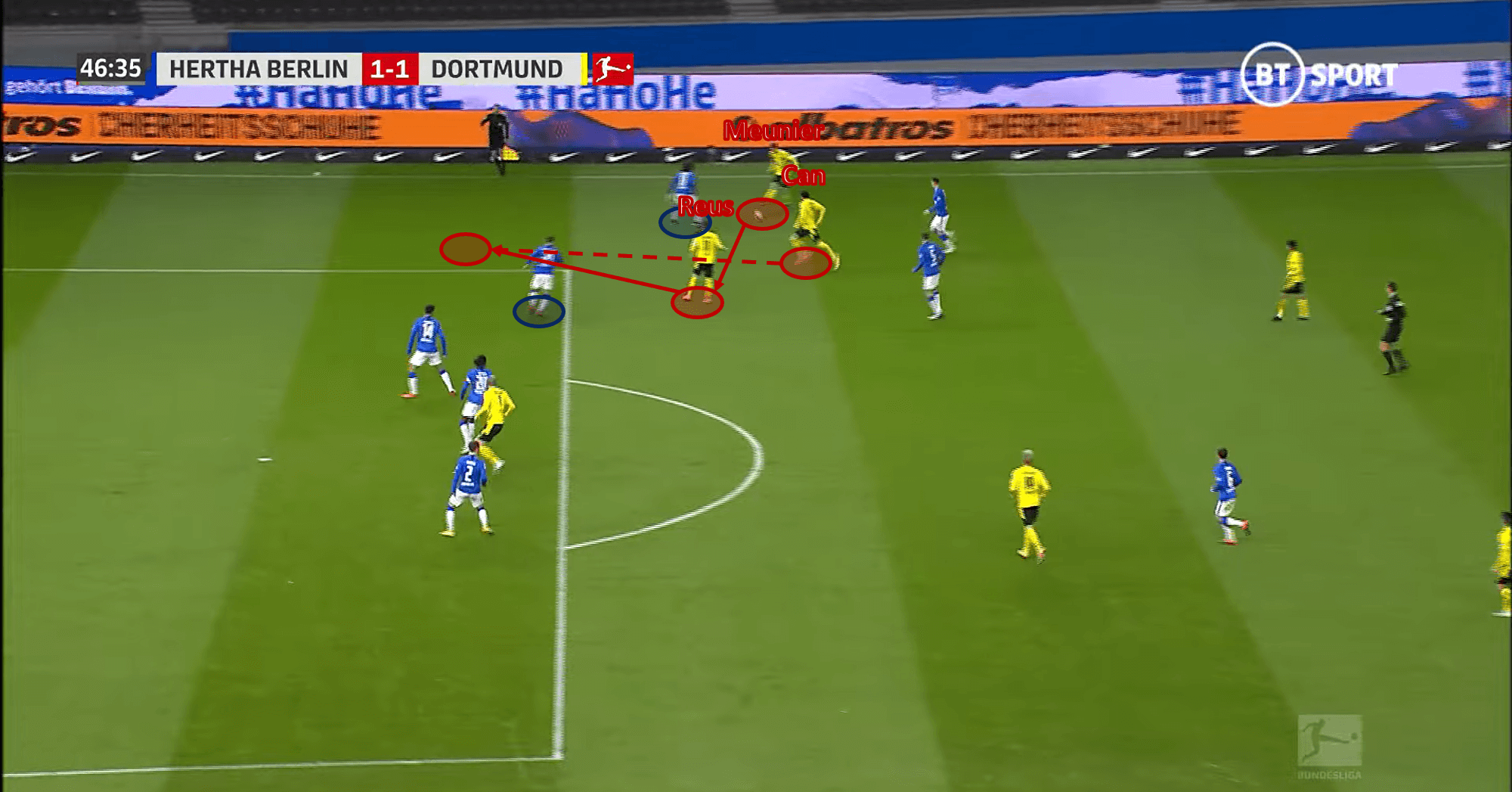 Out in a wide-right zone, Meunier has picked up the ball and finds Reus with the inside pass, instead of forcing it into the path of Can, he allows Reus to play the ball through as he is in a better position to do so. 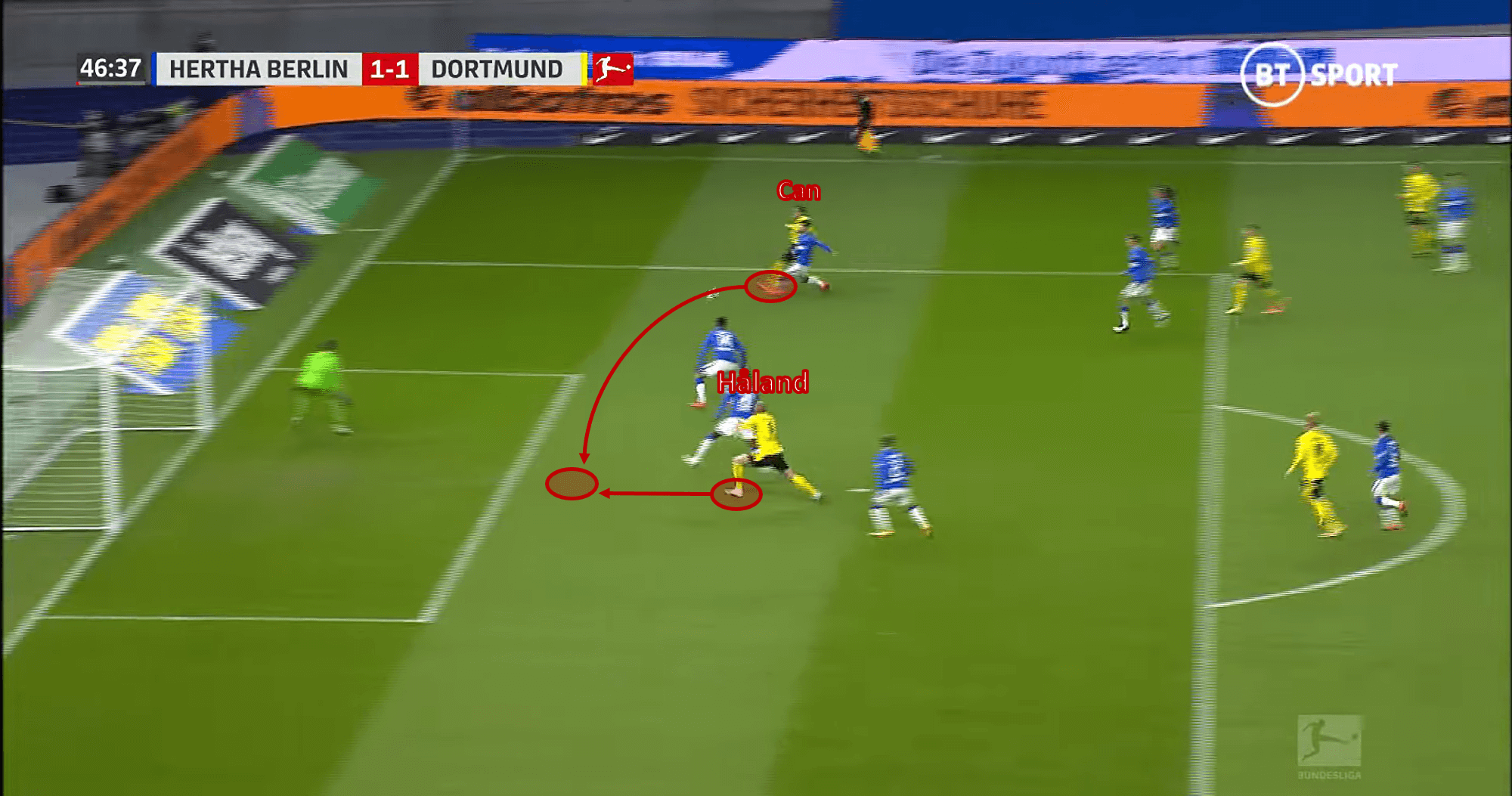 Can runs with the ball for a moment, before sending in a delivery into the path of Håland’s run, who, of course, finishes with aplomb.

The pace which Dortmund attacked at was too much for Hertha to contend with in the second half. On the counter, Dortmund looked to catch sides out with their speed on the break down wide areas. They left Hertha backpedalling on many occasions, and all their players speed of thought just seemed that second quicker than their opponents. Even Can (operating as a right centre-back today), was making overlapping runs and sending in deliveries!

Undoubtedly the star of the show in this game was the Norwegian goal-machine, Håland. He notched up four goals in this game, and each one was emblematic of his ice-cold nature in front of goal. His instinct in front of goal is unlike any striker on the planet, almost always opting for the highest value chances. There is no sense that he will ever fluff his lines when it is just him and keeper in front of him.

He displayed more than just an ability to score tap-ins in today’s game though. Although, that is not to say tap-ins do not require great movement in almost every scenario akin to that. However, in this game, he simply carried Dortmund to victory with his tireless pressing energy, and his impressive pace and movement, which we have already analysed in one of his four goals. 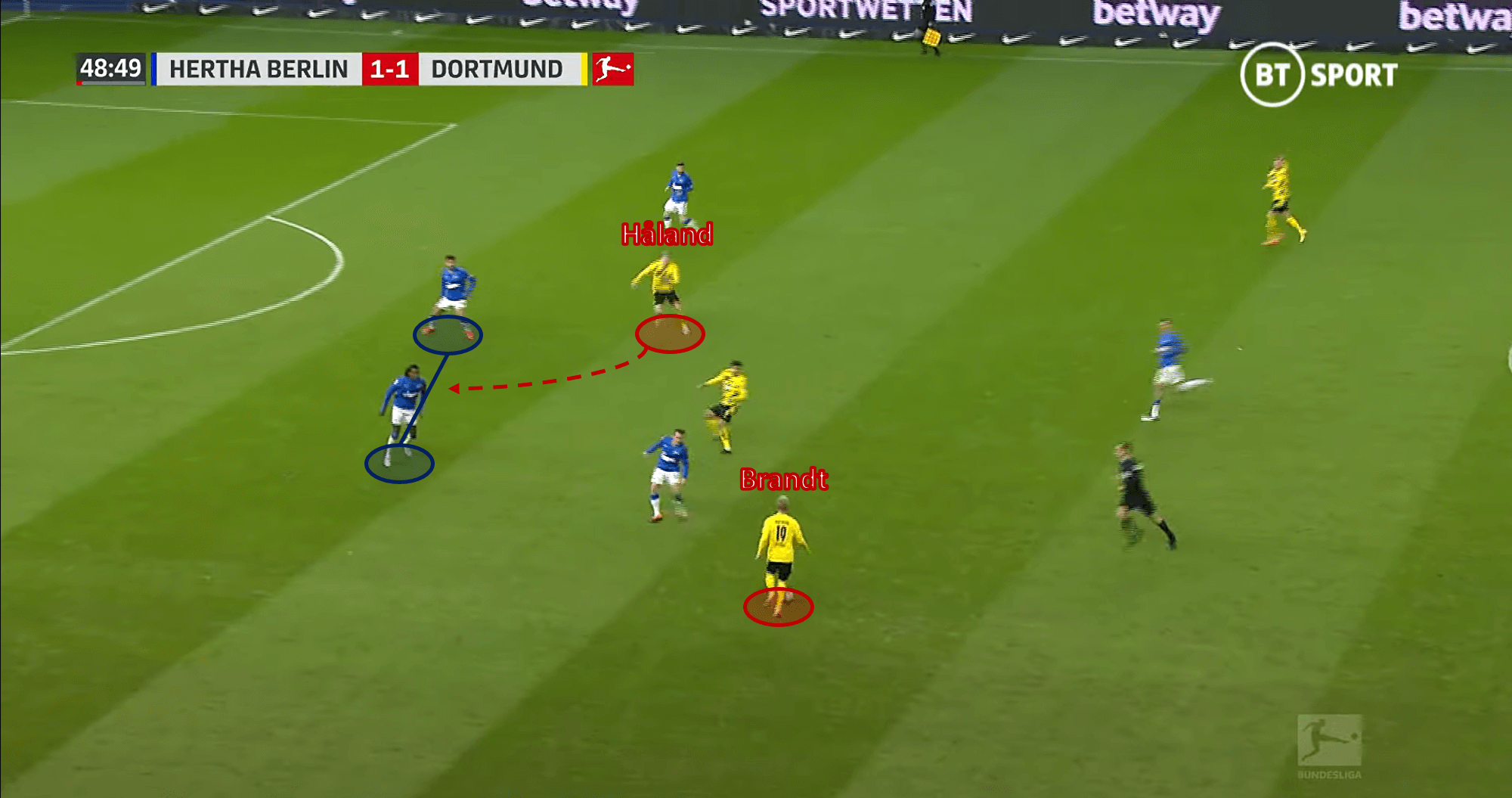 Brandt carries the ball up the pitch before slowing down as he approaches the final third. This acts as a trigger for Håland to transform into a full-form sprint in between the two Hertha centre-backs. 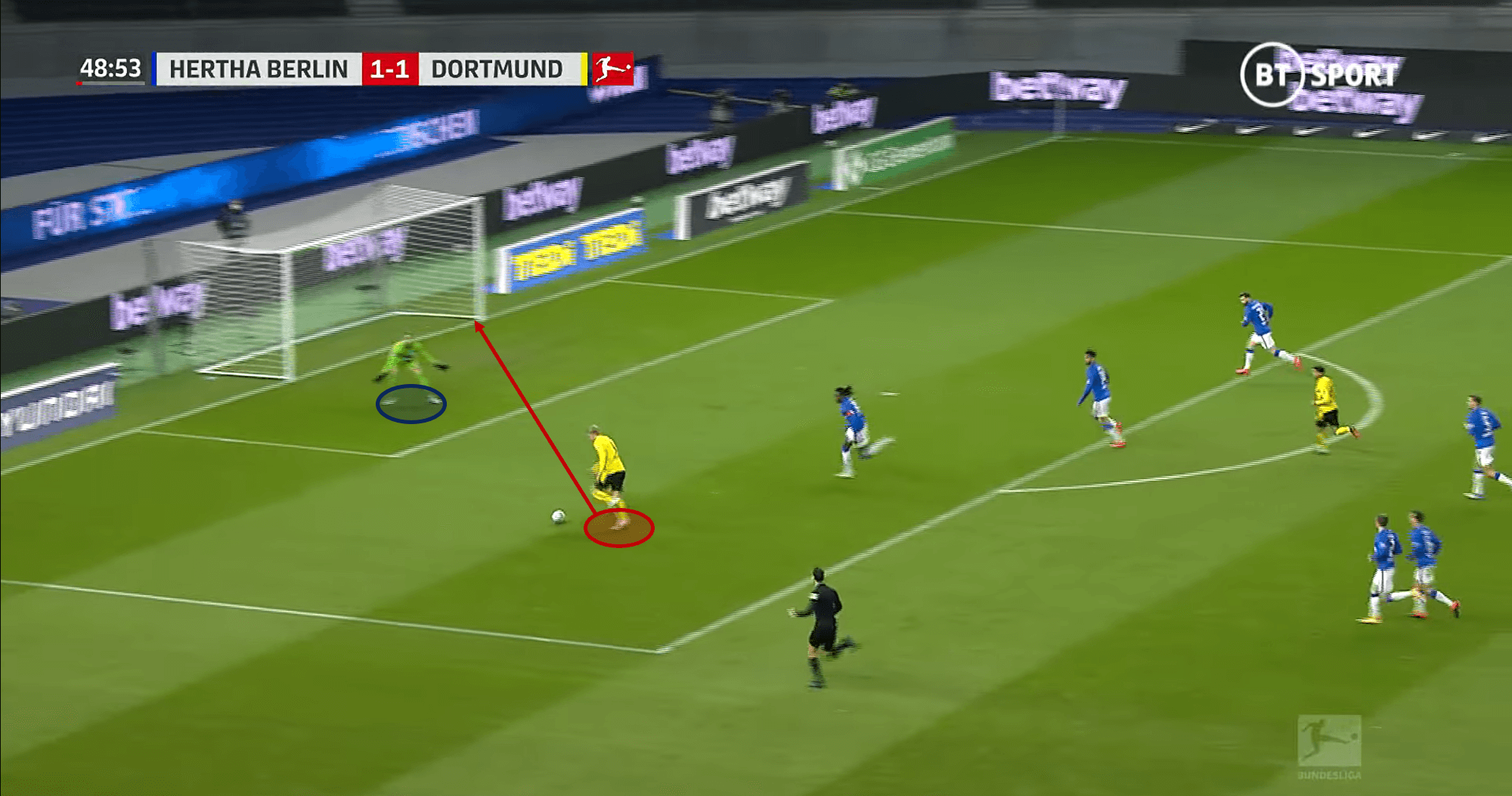 In on goal, Håland only has to find the bottom right corner, which he does with supreme efficiency.

As per Favre’s instructions, Håland harried the opposition defenders with his relentless pressing in the attacking third. If the full-back passed the ball back towards goal, the 20-year-old took it as his primary objective to recover the ball and run in on goal to finish his chance. For such a tall player, his acceleration in these moments is utterly remarkable. 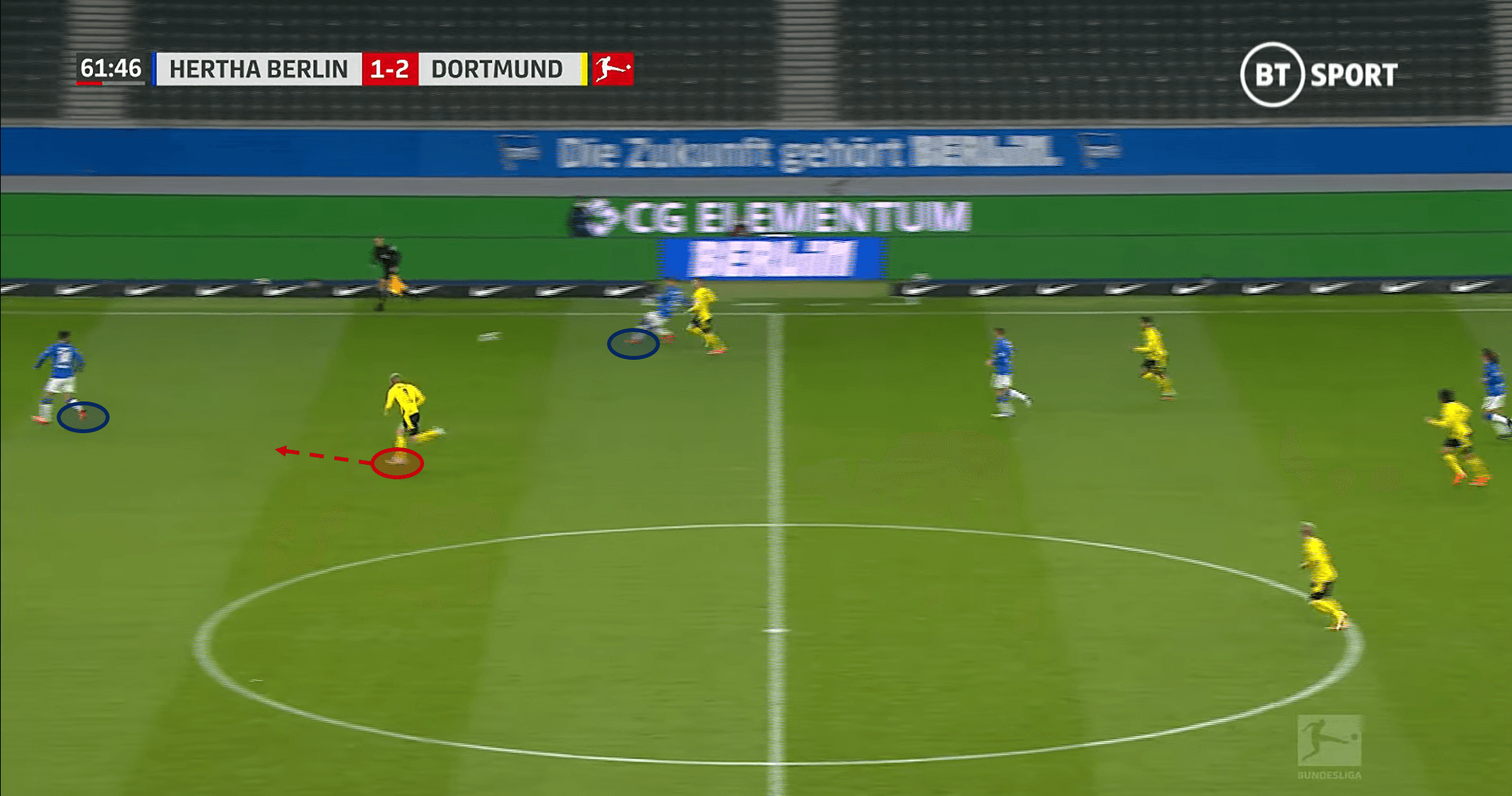 Håland spots the full-back pass back towards the centre-back, and fortunately for the Norwegian, it was a sordid pass. 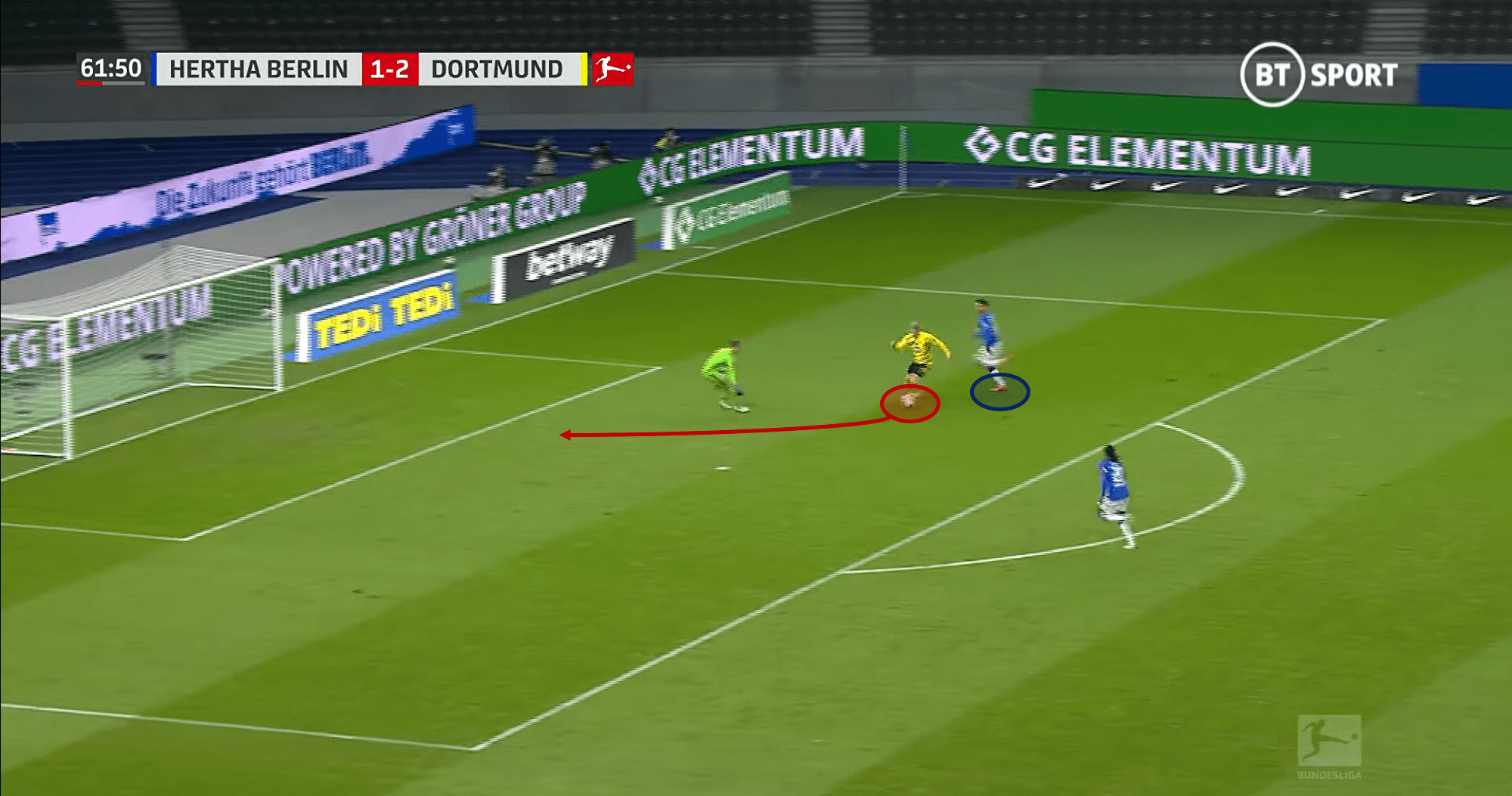 Here, he turns on the burners and collects the ball, keeps a cool head, rounds the goalkeeper, and finishes into an open net.

In a 10 out of 10 display, Håland stepped up to the plate. His movement continues to astound the masses, and his connection with his teammates grows stronger as the weeks go on. This takes his Bundesliga record to 23 goals in 22 matches, showing everyone that he is not just a flash in the pan. He’s soon going to have actual competition with Youssoufa Moukoko making his first-team debut at just 16 years and 1 day old.

In conclusion, this was a fairly one-sided display, with Dortmund creating high-value opportunities for the entire second half. Their short-passing attacking interplays is often too quick for any Bundesliga side to contend with, and this was no different here. xG had the game down as 1.24-2.86 in Dortmund’s favour, backing up that statement of dominance.

Favre will come out of this game with legitimate optimism. His side are genuinely lethal going forwards, with young players who can only improve with time. His defence still needs work, but the aim is clearly to outscore their opponents at this point. Labbadia is still tweaking with his system, and it did not pay off in this fixture. His side were ripped apart against a superb attacking force, but still, they were found lacking in many areas of this match.