England’s task to keep their realistic Nations League hopes alive was to pick up an away win against the number one ranked side in the world: Belgium. Unfortunately for them, the Three Lions shot themselves in the foot by conceding two first-half goals, which gave them an absolute mountain to climb in Leuven. Just nine minutes into the contest, Youri Tielemans opened the scoring with a fantastic drive from just outside the D. Dries Mertens got on the scoresheet in his hometown to make it two, as the former Stade Leuven academy player scored a brilliant free-kick midway through the first period.

From that point, it was England who constantly knocked on the door, as the Red Devils were happy to defend deep and allow the away side to have the ball in front of them. However, the damage was already done and England failed to haul themselves back into the game.

This tactical analysis will examine the tactics that Roberto Martinez and Gareth Southgate used. 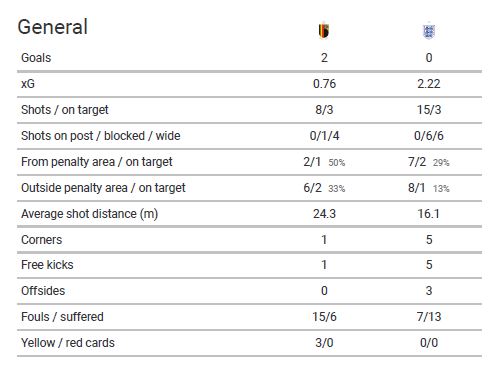 Both teams played a 3-4-2-1 formation. For Belgium, Real Madrid stopper Thibaut Courtois started between the sticks, behind a back three of Toby Alderweireld, Jason Denayer, and Jan Vertonghen. Thorgan Hazard and Thomas Meunier started at wing-back. Youri Tielemans and Axel Witsel were the two deeper-lying midfielders, with Kevin De Bruyne and Dries Mertens ahead of them in slightly wider positions. Romelu Lukaku led the line. 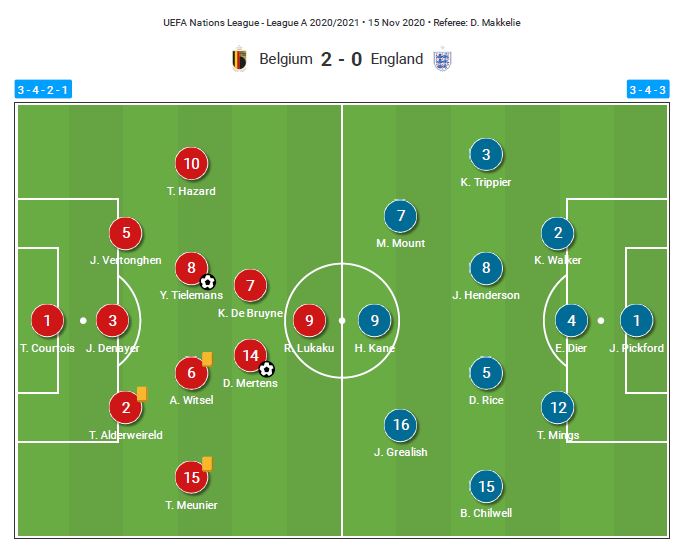 This was a game where both the scoreline and the expected goals (xG) were both quite misleading. A scoreline of 2-0 certainly doesn’t tell the full story of a game in which England had plenty of the ball and created high-quality chances. But the xG of 0.76 – 2.22 in favour of England doesn’t take into account the fact that Belgium took the lead early, and were happy to sit on that lead. Of course, the Red Devils did have chances on the counter-attack, but certainly after Dries Mertens put them 2-0 up, the focus was on being resolute and ensuring that England couldn’t find a route back into the game. Gareth Southgate’s side huffed and puffed, but thanks to the Belgian defensive structure and a lack of runners in behind, they couldn’t manage to break their hosts down.

In the screenshot below, we get a good idea of how Belgium looked to press when the score was 0-0. This is the phase just before Belgium win the ball back and open the scoring. 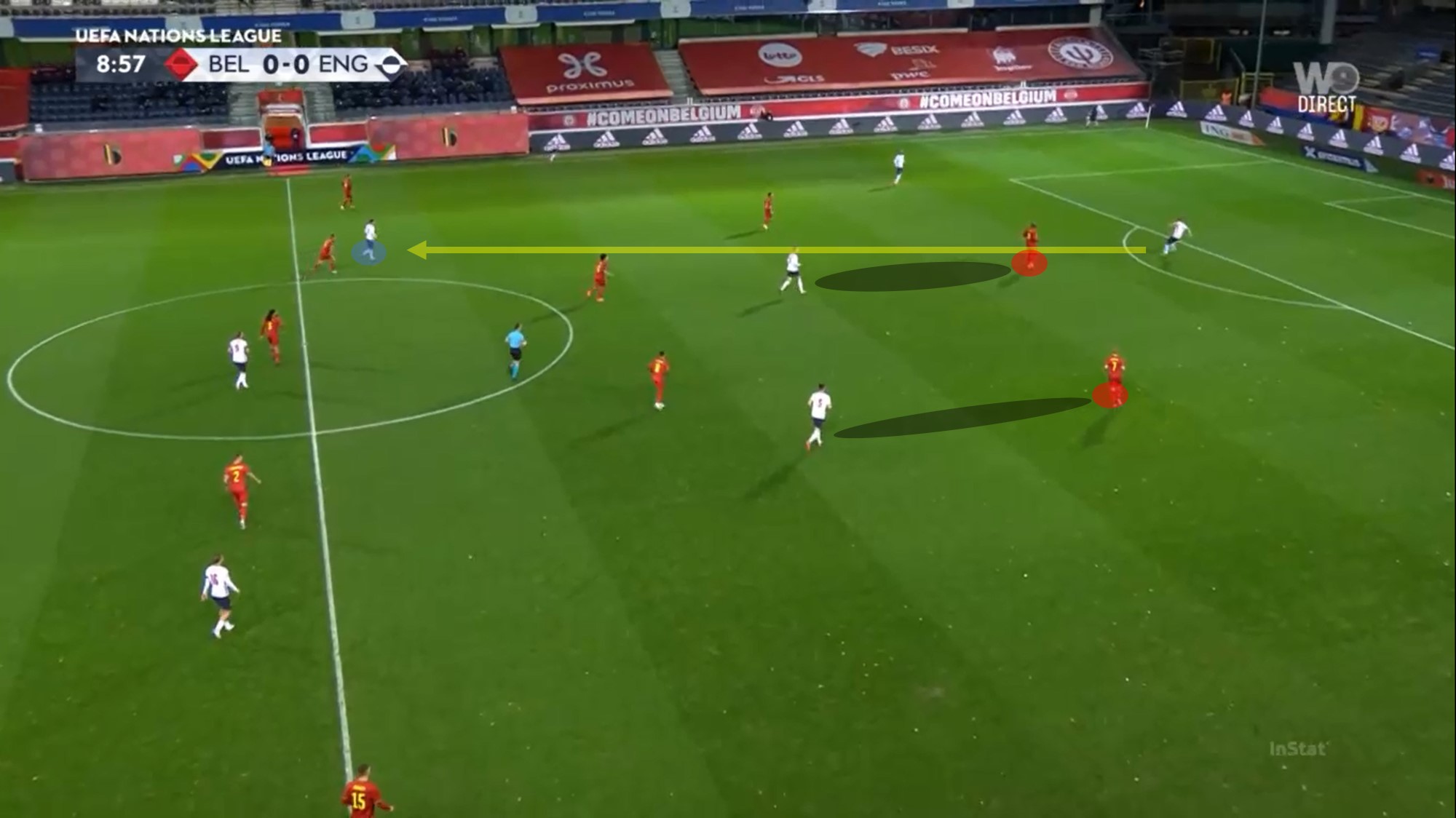 Belgium were defending in a 5-2-3 shape, although that sometimes changed into more of a 4-4-2. The focus was on initially stopping England playing through their two central midfielders. In the image above, Belgium frontman Romelu Lukaku is key. He applies moderate pressure onto Eric Dier, but he presses from a central angle. This keeps Jordan Henderson in his cover shadow, meaning that the passing lane to him is blocked. It would also be difficult for Dier to find his fellow midfielder Declan Rice because Kevin De Bruyne is in a good position to intercept if a pass came into that area. Even if Dier had managed to find a pass into one of the central midfielders, they would have been under pressure from their opposite numbers in Tielemans and Witsel. Therefore, they would have found it harder to turn forwards and progress the ball.

Dier could have passed the ball to right-sided centre-back Kyle Walker, but he’d have been under pressure quickly. So he decides to attempt a line-breaking pass into the half-space, into the feet of Mason Mount who had made himself available. Those types of passes are high-risk, high reward. If it comes off then you’ve managed to bypass two lines of pressure, and you could potentially have the ball in a dangerous area of the pitch. However, these passes have to travel a longer distance, which means there is more chance of it being intercepted. If Dier got the direction of the pass horribly wrong, it could have potentially been intercepted by three players.

Also, it can create a physical mismatch which doesn’t favour the ball receiver. That’s because the players who usually operate in these areas of the pitch tend to be diminutive wingers or attacking midfielders. They’re then receiving the ball with their back to goal, which in Mason Mount’s case, he isn’t used to doing. In addition, the player on the other end of the duel is likely to be a central defender, particularly if they are playing as part of a back three, as that shape requires them to come wider and defend in the half-spaces. When the pass came into Mount, the direction of the pass allowed the Belgian central defender to nip in ahead of Mount, who wasn’t on his toes to react to the ball or strong enough to hold off the defender.

Belgium take advantage of the space left by a vertically stretched England team to counter-attack quickly and open the scoring.

The Red Devils also showed their ability to be flexible when pressing. In the image below, their shape resembles more of a 4-4-2. Right wing-back Meunier jumped into the midfield line, with Alderweireld pushing out to right-back. Thorgan Hazard took up a left-back position, with Mertens dropping onto the left of a midfield four. 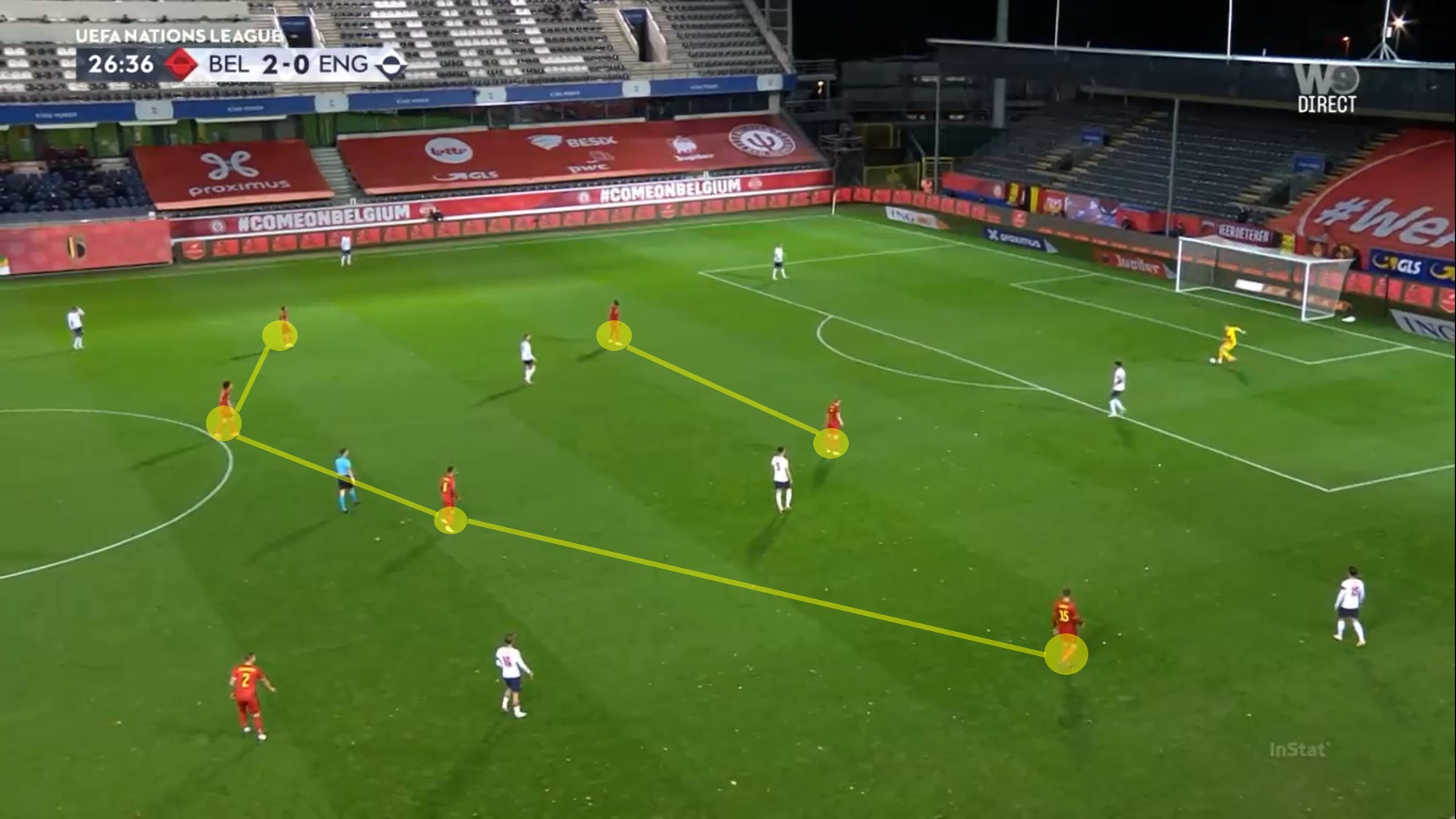 But the principle of how stopping the ball progression into the midfield two remained the same, as Lukaku and De Bruyne press with them in their cover shadows. By temporarily moving into this shape, it makes it easier for Belgium to press England’s wing-backs if they get possession because they can press higher knowing that there’s cover in the wide areas from the players temporarily acting at full-back.

Belgium showed their flexibility in the defensive phase as the game wore on, when they began to sit deeper. They’d then often to switch to a flat back five again, with either a midfield three or four in front of them staying quite deep to limit the spaces between the lines. You can get a sense of just how deep Belgium looked to defend, particularly in the second half, by looking at the average positions graphic below. 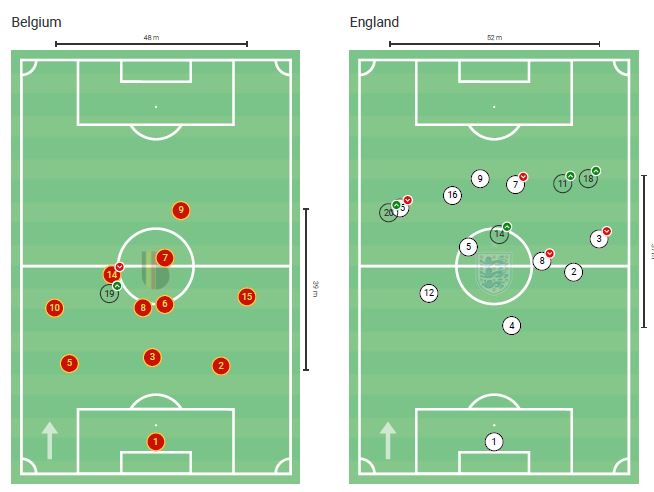 England put together some good attacking moves and worked the ball into some decent areas, but they struggled to find that killer pass that would split and opposition defence. Their approach play through the middle and into the final third was generally excellent, but they did struggle to get in behind that Belgian defence. This was mainly down to the lack of runners in behind. Without Raheem Sterling, Marcus Rashford, or Jadon Sancho (who came off the bench), England didn’t have a player with burning pace who would look to run in behind the defence.

Jack Grealish was England’s best player, but the Aston Villa man always wants the ball played into his feet because his strength is picking the ball up in tight areas and taking people on or finding a pass. Harry Kane also dropped deep at times, but he didn’t have the runners in behind. Mason Mount did make a few runs in behind, but he’s another player who isn’t a natural winger so he wanted the ball to feet more than players like Sterling or Rashford would. 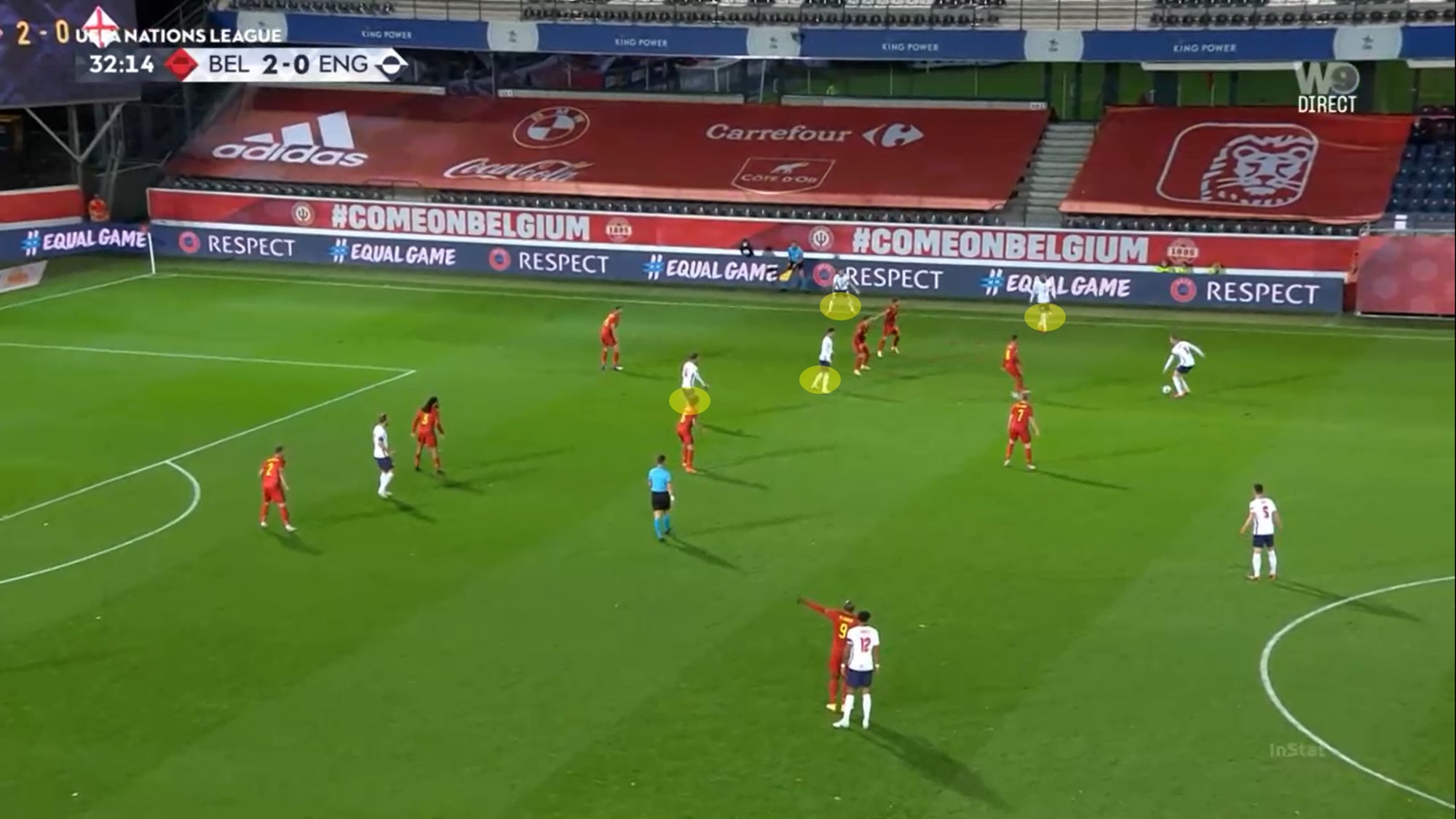 In the image above, you can see that the circled England players are asking for the ball to feet. Even wing-back Kieran Trippier, who started in a deeper position, doesn’t want to continue that run to go in behind. This meant that Belgium’s defensive line wasn’t pinned back, so the space between their midfield and defence was small. Therefore, England didn’t have much space to play in between the lines.

The next images show us a similar situation. 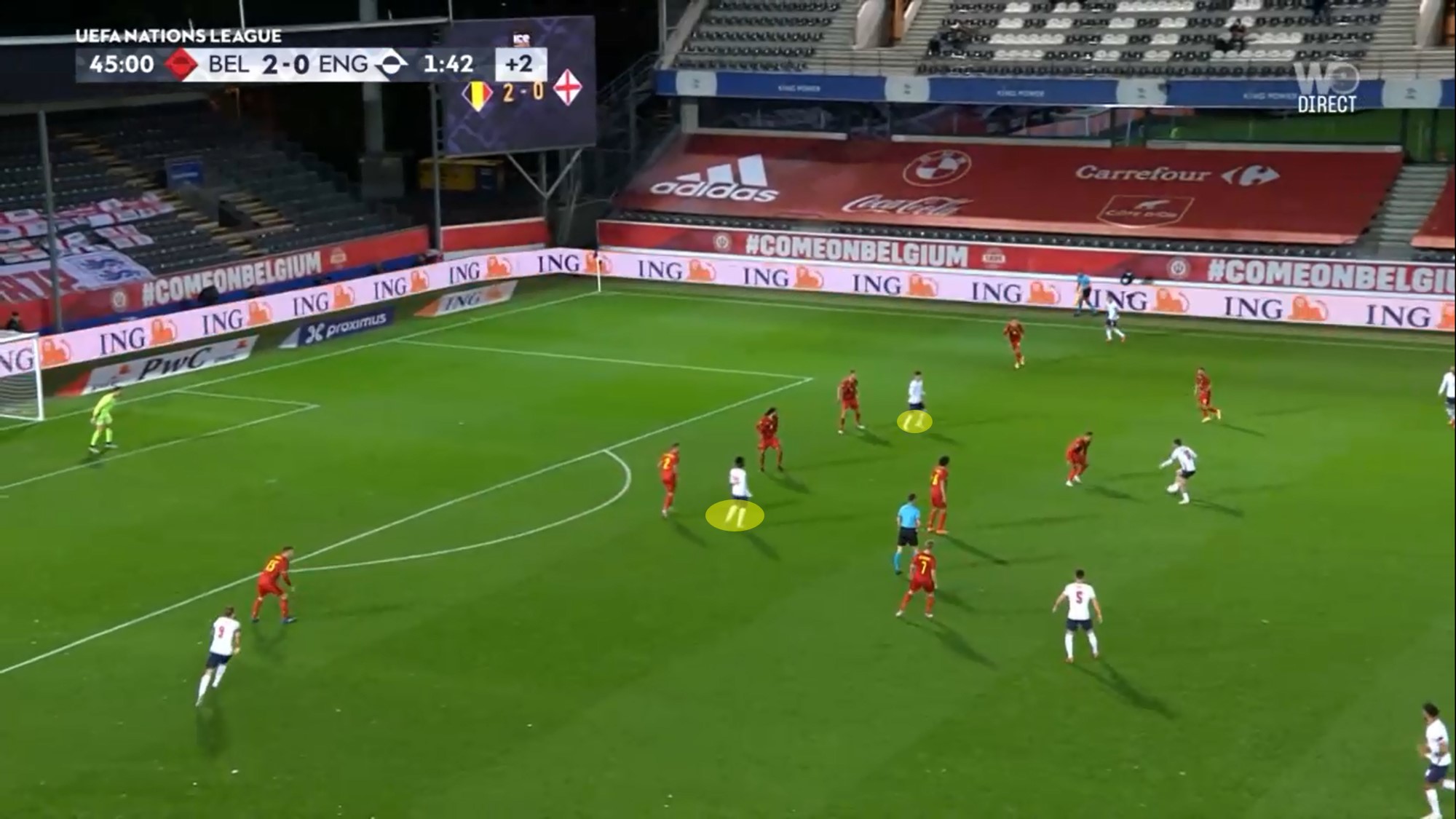 The two highlighted players are asking for the ball to feet, even though they’re surrounded by Belgium players which would make it hard for them to play passes to carve the defence open. If one of them makes a run in behind, it gives them a better chance because they’ll be running 1 v 1 off the shoulder of the backline. Instead, the phase of play breaks down because they try playing a quick one-two whilst surrounded by Belgium players. 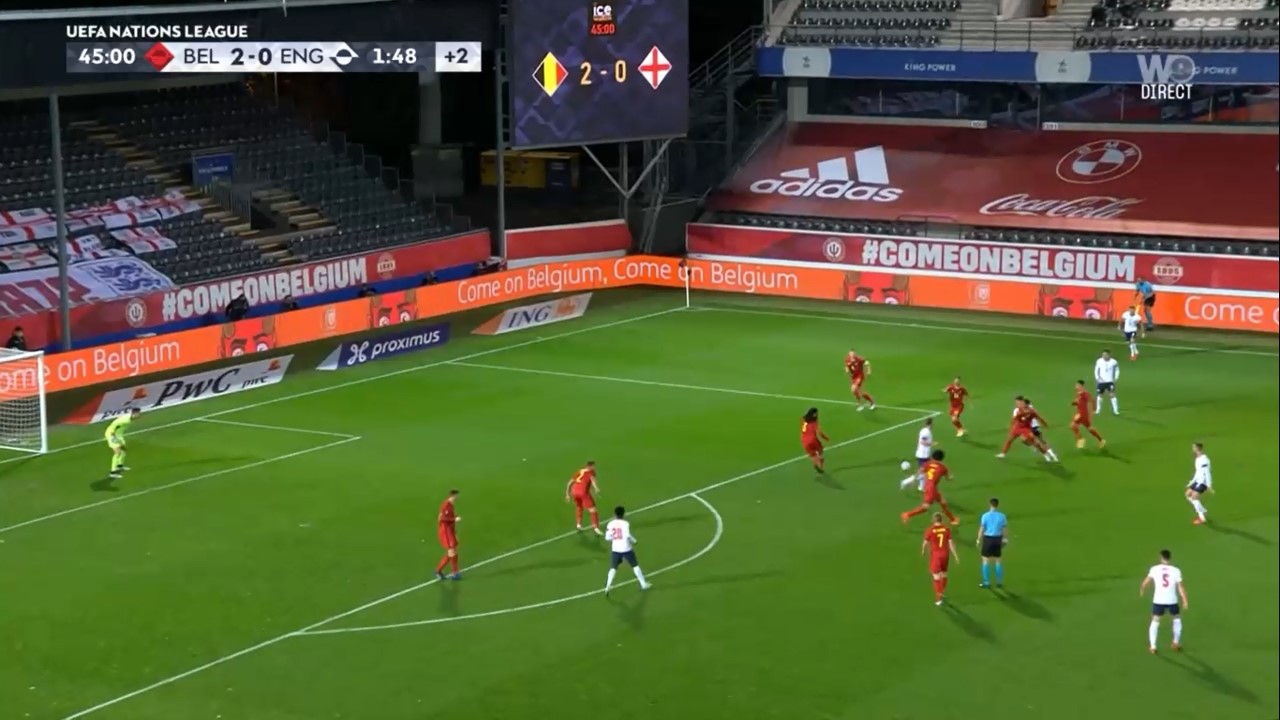 It also didn’t help that when an English player did make a clever run in behind, they often weren’t found by the man in possession. In the below image, Mason Mount has timed a run in behind the defence expertly, and it would have been a great opportunity to try and stretch that Belgian defence by getting in behind them. 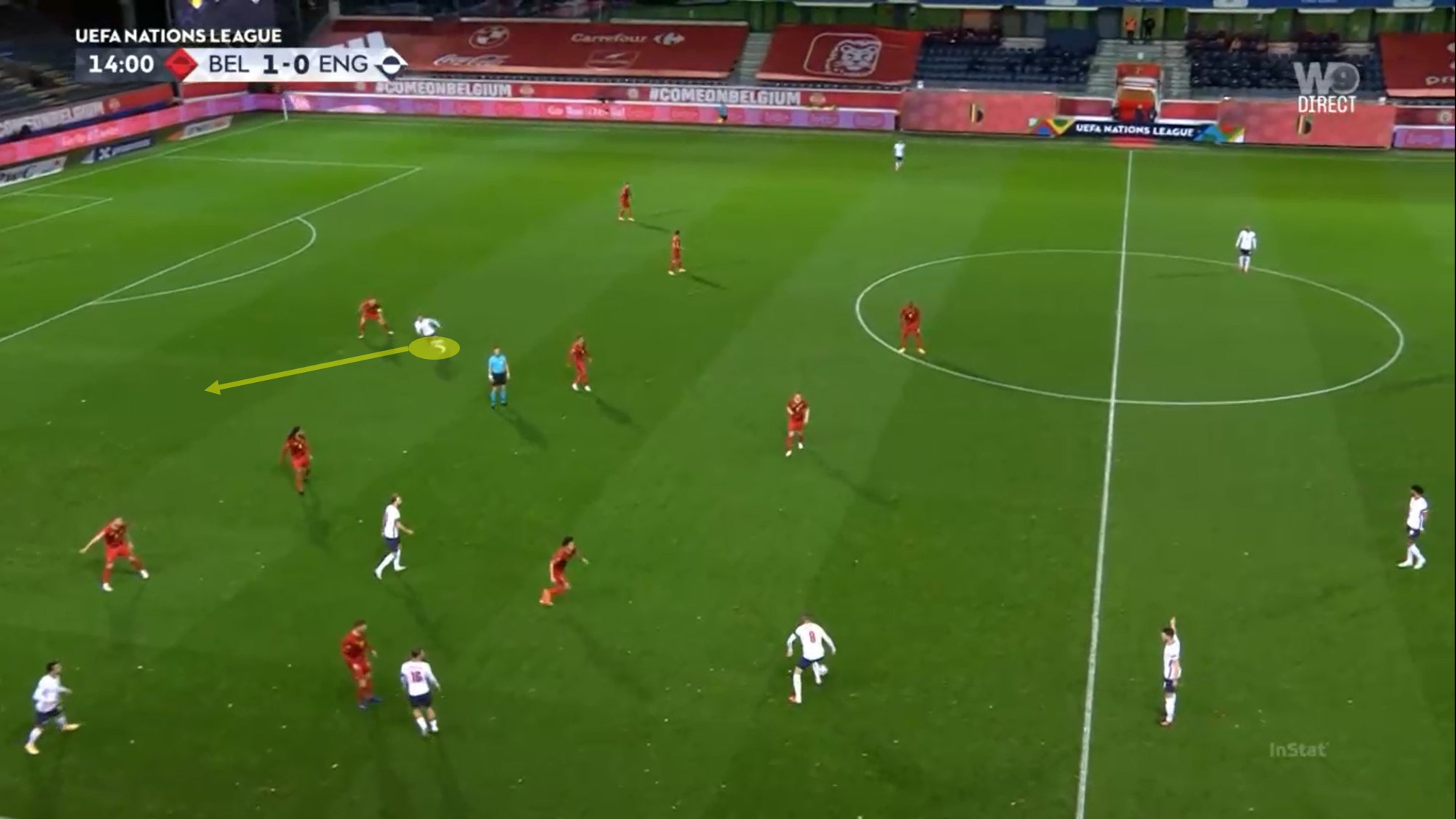 But instead of seeing the pass and playing a risky ball over the top, Henderson chooses the safe option by going backwards. This allowed Belgium to get set and defend again.

Conceding those two first-half goals damaged England’s Nations League campaign beyond repair, as defeat mathematically ends their chances of finishing top of the group. Like the analysis has stated earlier, the Three Lions had plenty of the ball in good areas, but they lacked incisiveness both on and off the ball in the final third. Belgium were content to sit back and soak up pressure, pretty secure in their belief that England wouldn’t be able to break them down.

The performance in Leuven was far from disastrous from an England perspective, rather it was the final nail in the coffin of a bitterly underwhelming Nations League campaign. Seven points from five games, and only one goal in open play – it’s been a year of regression for the Three Lions, who have lost their attacking swagger.