Chicago Fire and NYCFC met at Soldier Field on the final MLS matchday of the season before the beginning of the playoffs. After twenty-two matches completed, there was much to play for both sides in the final match. There were many different pathways to the playoffs, but the side who came out victorious would be the most likely.

For Chicago Fire, they were looking to recover from a bad run of form which left them without a win in the five matches leading up to the final game of the season. It was crucial for them to win to have a chance at a playoff spot, which could explain the expansive tactics viewers saw during the match against NYCFC.

NYCFC had a better lead up to the game, unbeaten in three matches leading up to the final match. Again, a win and NYCFC were likely into the playoffs.

Both clubs had a lot to play for, and the match did not disappoint. This tactical analysis and match report will examine the tactics of both sides during a match that saw NYCFC win 4-3 in an exciting, attack-minded fashion. 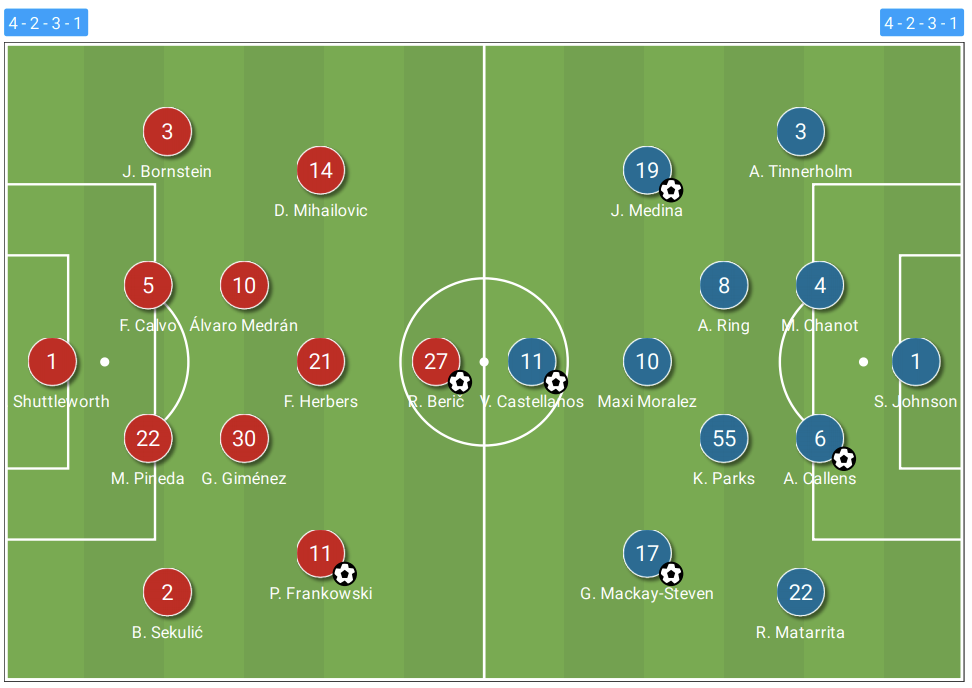 Raphael Wicky, manager of the Chicago Fire set out in a 4-2-3-1 formation that he has utilised during his spell. Robert Beric led the line with exciting players such as Poland international Przemysław Frankowski playing on the wing. The midfield made up of two pivot players and a number 10. Bobby Shuttleworth, the goalkeeper, was protected by a back four.

NYCFC’s manager, Ronny Deila, also started in a formation that mirrored the Fire as he set up in a 4-2-3-1. The Argentine Valentín Castellanos was the main man while Deila deployed an attacking three of Gary Mackay-Steven, Maxi Moralez and Jesús Medina. These attackers were supported by two pivot players and the typical back four of NYCFC.

From the beginning of the match, spacing became a huge issue for the Chicago Fire. Despite scoring three goals, which mostly came as a result of lazy defensive errors from NYCFC, the team from New York was dominant. Both clubs came out swinging for the fences as they looked to gain an early advantage and secure a place in the MLS playoffs.

For NYCFC, they started off the first phase of the match with an astounding 66% possession and 0.73 attacks per minute while being extremely comfortable inside the Chicago Fire’s half of the pitch. There were two reasons for this, one of which was created by NYCFC’s attacking tactics and the other by the Fire’s lack of cohesiveness.

In regards to the lack of togetherness, the Fire set out early on to press the ball to try and win the ball back high the pitch. This led to a pressing intensity of 7.3 in the first phase of the match. Despite losing control of the ball as explained earlier, Chicago still defended reasonably well. In the analysis below, you can see the attacking players from the Fire all pressurizing the ball to make it difficult for NYCFC to play out. In this case, they won the ball back and had a good chance on goal because of this positioning.

When this tactic took place and was successful, there was nothing to worry about. However, if NYCFC was to break the press, it became a serious problem. The Fire would be constantly outnumbered and would leave huge amounts of the pitch open. The image below shows an average positioning map of the two teams. Despite this being a representation of the entire 90 minutes, you can see how significant the space between the centre-backs and the midfield is for the Chicago Fire. In order to combat this open space, the defenders need to step up and be a cohesive unit with the rest of the team. This did not happen, thus preventing an effective high block. When seeing some of the effective teams such as Bayern Munich and Liverpool implementing a high block, you never see their centre-backs so deep. 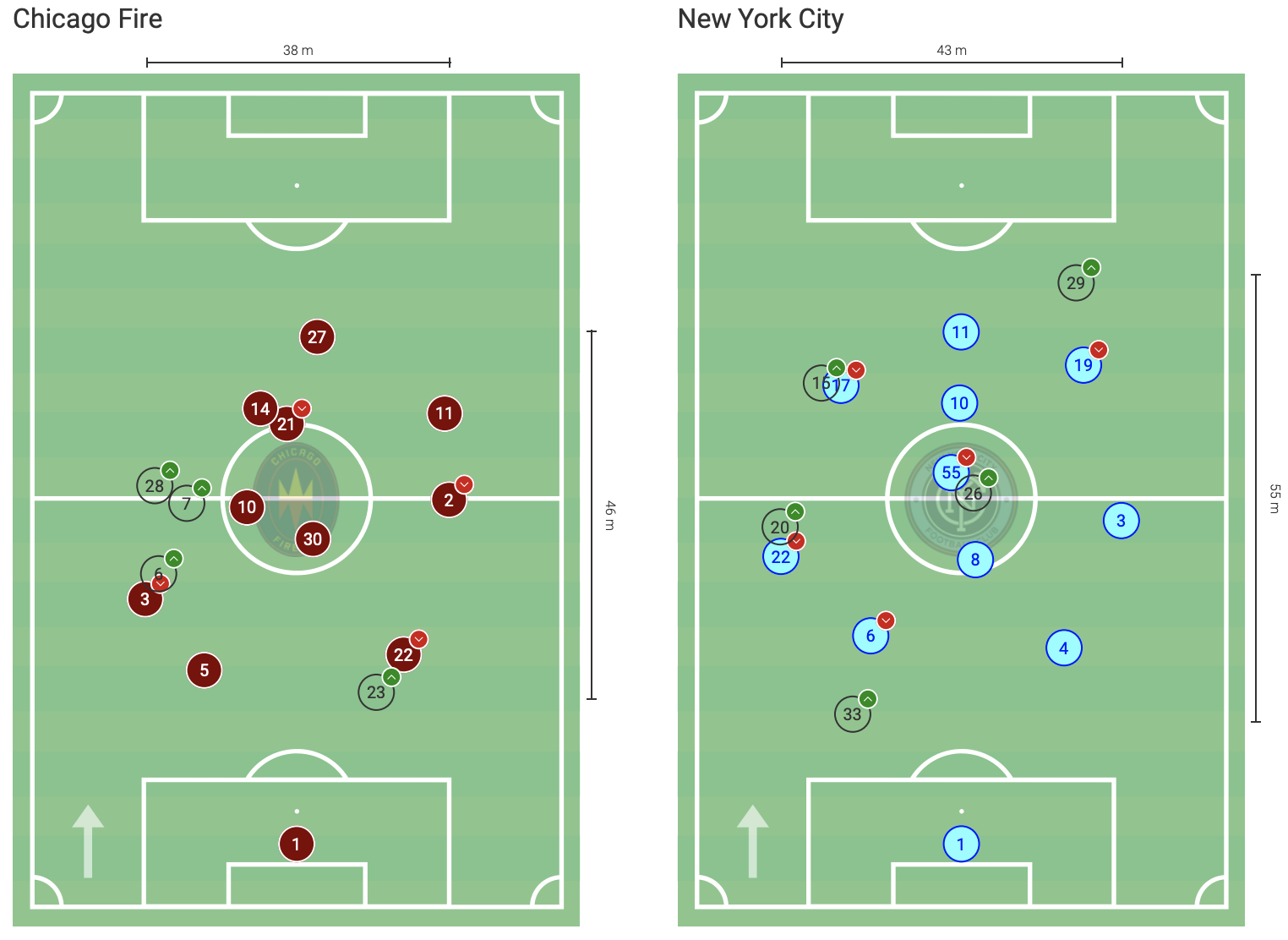 NYC recognized this and began to recognize and significantly changed their strategy in possession to take advantage of the space in the middle of the pitch. In the first phase (first 15 minutes) of the match, NYCFC had a long passing share of 10%, whereas in the second phase of the game (15-30) they almost doubled their long passing share. The reason for this was due to how deep the Fire were playing even when pressing. There was a complete disconnect between the Fire’s defence and midfield, causing tremendous problems.

An example of how NYCFC would utilise the long ball can be seen below. The Argentine Castellanos makes a fantastic run off of the centre-backs shoulder. Here, the ball is about to fall on his foot. He controls the ball extremely well and is able to drop the ball to Mackay-Steven who is circled. His run is undetected by Chicago who are focused on Castellanos. By the striker making the run, it took the defender away from the space he was occupying, allowing NYCFC to easily collect the ball in dangerous spaces.

This led to the Fire’s centre-backs having to second guess following the runner. In the analysis below, again Castellanos is causing problems. This time he received the long ball and waits due to Mackay-Steven’s forward run. The Argentine draws in the Fire defender allowing for the Scottish winger to get in behind. Castellanos then plays a delightful through-ball which leaves Chicago exposed.

This tactic effectively solved the problem NYCFC was facing during the match. They had to find a way to break past the press of Chicago, but that was not always easy. However, with effective long balls, they were able to release the press early and take advantage of the Fire’s spacing problems.

Shootout in the midwest

While both sides executed poorly defensively, NYCFC and the Chicago Fire came out to play in terms of attacking production. This match section of the match report aims to highlight the fantastic attacking natured football that was on display at Soldier Field. Yes, this was due to poor defending, but another reason for the expansive match was because both teams needed to win. Each manager was hoping their firepower would outlast the other.

NYCFC had a total of 20 shots during the match with 10 on target. Their xG was 2.23 while they managed to score 4 goals. This output was impressive and was due to their commitment to get players forward. They found themselves in positions in the final third due to their tactics to find the space in the middle of the pitch. In the box, they got many of their attackers forward and would force the Fire back into their own 18 on multiple occasions. This would create very difficult scenarios for defenders to handle. An example of this can be seen where they overload the box in order to create a shot for Medina, who is circled below. Even if Medina did not take the shot on (which he scored), he could have easily played a pass to Mackay-Steven, who again was in an excellent position to do damage. Chicago’s defence was outnumbered and could not cover every option effectively.

Overloads was also a tactic that the Fire attempted, especially while chasing the match. After going down by a couple of goals, it was crucial to get on the scoresheet. Instead of changing formation, Wicky wanted to flood the box with players. This can be seen in the example below. After falling, 2-1 down, Chicago had eight players in front of the ball, trying to create an overload. This is incredibly dangerous, but in order to score more goals, it was a risk they had to take. As you can see, they wanted to create areas on the wing and half-spaces in order to break down NYCFC. When Chicago got their chances, they took them effectively.

The Fire ended the match with an xG of 2.38. Despite their poor defensive performance, they still managed to create, perhaps out of desperation. They had 14 shots on goal, with 6 being on target.

This match was extremely entertaining from a neutral perspective. It displayed very attack-minded football with very little regard for defending because both teams needed to win. Ultimately, NYCFC ended up booking a place in the playoffs where they are set to play the Columbus Crew in the first round. Unfortunately, the Chicago Fire missed out but the end of the season will serve as a learning lesson for the hosts.

This match felt very similar to the high-flying Leeds United vs Liverpool match earlier on in the Premier League season. There were lots of goals and weak defensive displays.