The 2020 MLS Season is well and truly underway since the restart. Teams from the Western and Eastern conferences have been battling for the top spots in the league tables. In the Eastern conference, there is a tight race for the top four with the Columbus Crew leading the way while Orlando City, Toronto FC, and the Philadelphia Union are all battling for the second position. Just behind the pack lies the Montreal Impact, who were looking to make a statement in Sunday nights match against the Philadelphia Union.

The Union is in 4th place in the Eastern Conference with 22 points while Montreal is in 6th with 16 points. The match represented an important one for the Impact who needed three points to keep pace with the rest of the pack. The Impact is led by former Arsenal and Barcelona star Thierry Henry, who has taken a keen interest in management since his career ended. Despite failing to impress at Monaco in Ligue 1, Henry is hoping to lead his Montreal side to better results.

This tactical analysis and match report will examine the tactics which lead to the Philadelphia Union defeating the Montreal Impact 4-1. 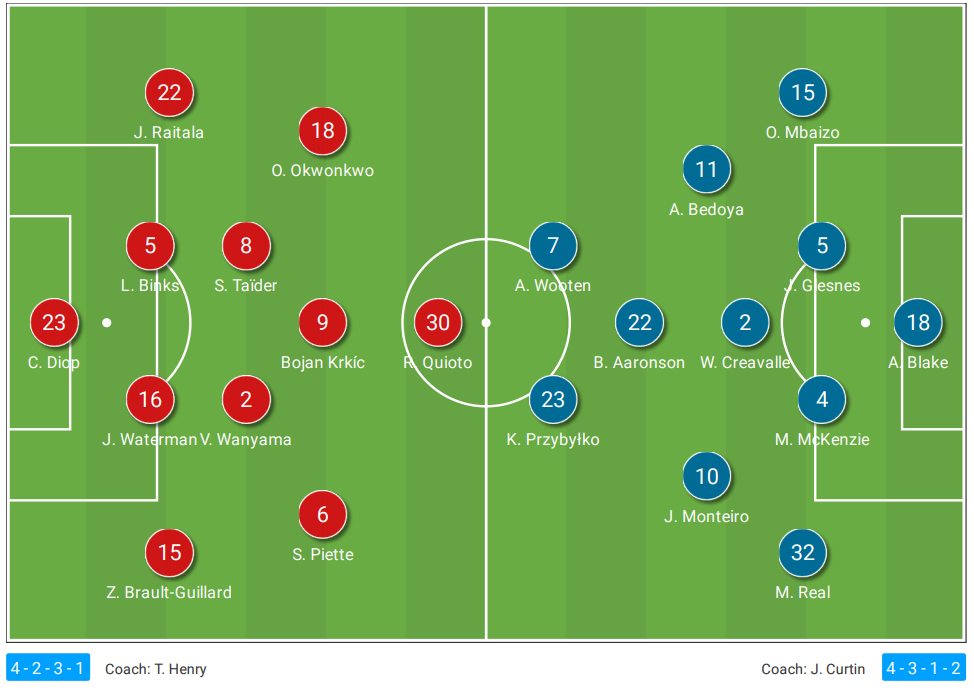 Jim Curtin’s Union side started in a 4-3-1-2 formation that formed a strong midfield and encouraged the left and right-sided midfielders to push wide when in possession. This formation could also be seen as a 4-1-2-1-2 with the creative Brenden Aaronson being the connection between the midfield and strikers.

Henry’s team set up in a 4-2-3-1 with a strong base in the midfield. Saphir Taider and Victor Wanyama anchored the team which provided the defensive cover needed for the attacking players to have more freedom. Ahead of them was Bojan Krkic in the number 10 role, who serves as Henry’s main creative force. In defense, the former Arsenal man preferred the back four setup, similar to his counterpart.

After an early set-piece goal, Henry’s side was in a great position within the first ten minutes. Romell Quioto slotted the ball past Andre Blake and the Impact was underway. It was a fairly close opening phase of the match which saw Monreal on top.

However, only a few minutes later during a fairly routine duel in the middle of the pitch, Quioto got sent off for a flagrant elbow, and deservedly so. This had a serious impact on the Montreal Impact and Henry’s tactics as they continued the match. As stated earlier in the match report, the Canadian team started in a 4-2-3-1 formation. With the absence of their starting striker, changes were necessary in order to keep balance and shape.

Henry reverted to a 4-4-1 with Bojan leading the line. However, without the presence of their foremost striker, it made things very difficult while attacking. Bojan is more of a creative striker whose strengths are his technical skill and imaginative play, not his ability to hold up the ball. This led to a significant dip in possession for the Impact which allowed the Union to grow into the match quickly. Before the red card, the possession stats were much more even, with the Union beating the Impact with 54% possession. After the red card, this statistic turned even worse. The chart below shows the possession stats based on every 15 minutes of play. As you can see, immediately after the red card, the Union scored a goal and enjoyed an enormous 67% of the ball. 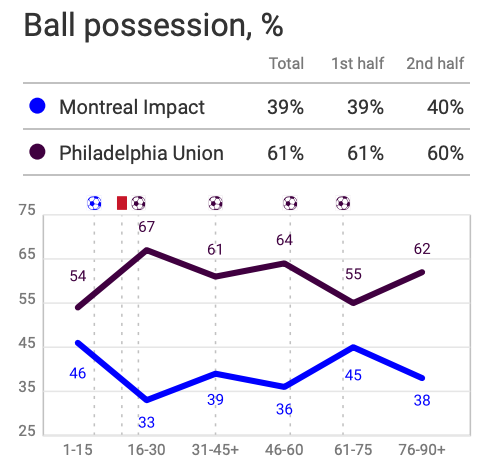 It was clear that when attacking, the Impact had limited options and could not link up play effectively. Where the red card hurt them the most was defensively. With the sending off occurring so early on in the first half, Henry’s team had their backs against the wall.

In order to combat the onslaught they faced, the Impact attempted to keep two strong blocks of four behind the ball while Bojan tried to close down the ball carrier. They invited the team from Philly forward, an invitation which the Union could not reject. The centre-backs for Philadelphia enjoyed an ample amount of time on the ball. In Henry’s eyes, this was ok as long as they stayed compact and protected their valuable goal advantage.

The analysis below shows the beginning of a passage of play that was almost routine for the Union throughout the match. It is important to take into account the defensive shape of Montreal in these moments. They are doing everything to clog up the middle of the pitch in a low block. This has two advantages. By covering the middle, they are eliminating the quickest route to the goal and most dangerous area of the pitch. The second advantage is the possibility of the counter-attack if the Union got sloppy in possession. 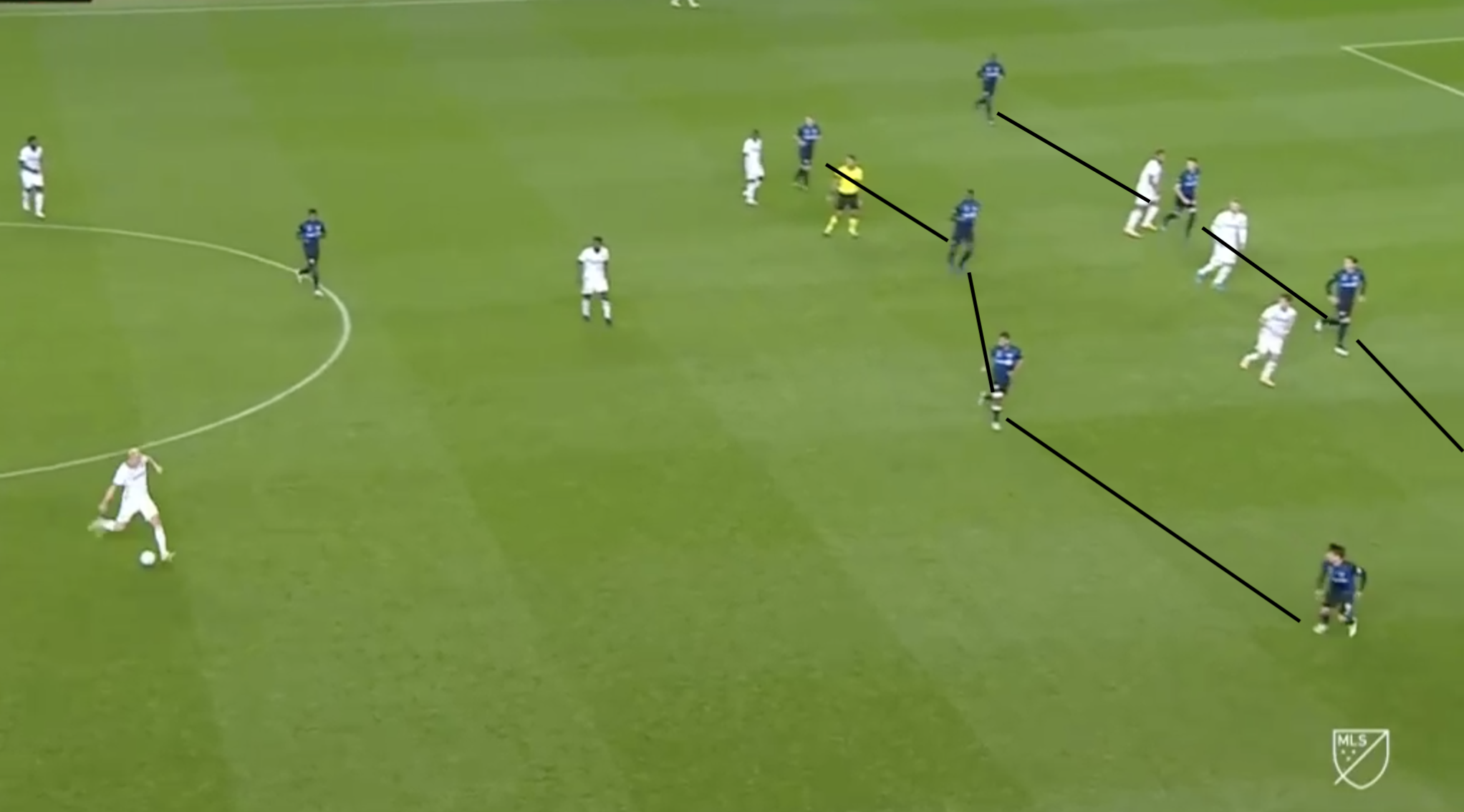 The example demonstrates some of the positives, but there are also serious negatives that occurred due to this defensive shape. Yes, the middle of the pitch was covered well, but the wings became a problem.

As the last section of the match report suggests, the red card opened up a lot of areas of the pitch for the Philadelphia Union to exploit. Because the Impact was compact and concerned with covering the middle of the pitch, the wings opened up. The wide players for the Union enjoyed a lot of time on the ball to deliver passes and make forward runs into space.

Shockingly, this was never addressed by Henry, who seemed to be comfortable with Philly controlling these areas of the pitch. The Philadelphia Union launched 31 attacks from wide areas. To no surprise, each of their four goals originated from wide areas. There were two common sequences when the wide areas were utilised effectively by the Union. The first was creating strong combination play to switch the point of attack while in the final third and the second was long balls from the centre-backs to the wingers.

The analysis below will look into an example that created a goal for the Union. In the wide area, the winger Alejandro Bedoya plays it into Aaronson who is surrounded by Impact players. At this moment, Montreal covers the channel well. However, what is not covered well is the central midfielder, Warren Creavalle, who is standing in acres of space. Because the shape of the Canadian team is pulled from its compact nature, opportunities open to change the point of attack quickly and in a devastating manner. 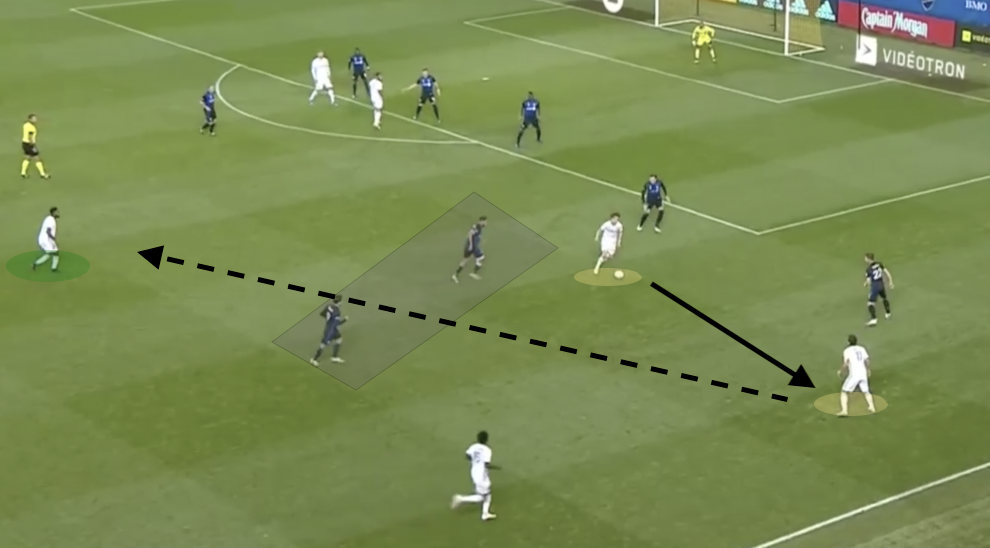 Bedoya then plays the ball into Creavalle and follows his pass but moves to the left of the defender. This pass successfully splits the press and moves the ball into the midfield. Here, the Impact players try to make up for the breakdown in shape by pressing Creaville who then lays the ball into Bedoya’s overlapping run in order to switch the ball to the other side of the pitch. As you can see, the Union has players loaded on the left side ready to attack the space they uncovered.

This example shows how the Union produced very good attacking football which made it difficult for the Impact to defend effectively.

When the Impact was together and the Philly centre-backs had possession, they were sometimes too compact. In the analysis below, it shows an example of Bedoya open on the right flank. A simple ball from the centre-back to Bedoya would completely unlocks Henry’s side with one pass. As the match continued, this occurrence became an even bigger problem. The Union ended the match with 17 shots with 10 on target, many of which could have easily increased the already large scoreline.

Another aspect of Montreal’s defence that hurt them was the lack of focus when preventing the Union’s forward movement. It has already been established that the Impact stayed compact during the match, but there were moments that were quite frankly unacceptable. The defenders exhibited lazy covering that allowed for the forwards to run rampant.

It is incredibly important as a central defender to be aware of the forward movement of the strikers and react well to it, especially if the striker could likely outpace you. Even if you trust the speed of a defender, it is always possible that the first step can lead to a tremendous advantage for the attacker. There are ways to prevent this, one of which is holding a steady defensive line that will be able to catch these runs to be offside. This is a risky style of play and a defender should always be ready to track back with the forward runner.

In the case of the Montreal Impact, their defenders did not do this and switched off too many times throughout the match. A prime example of this occurs as the Union forward makes a fairly simple run off of the Impact centre-back. Here, there is far too much space between the defender and attacker who is making the progressive run who is allowed to push forward into the space with ease. The striker is practically in between both defenders which is extremely dangerous. With the right delivery, this action could easily lead to a goal.

From a tactical perspective, the match between the Montreal Impact and Philadelphia Union got very interesting after the early red card which saw Quioto leave the pitch. Before that, the match was set up for a terrific battle between two strong sides in the Eastern Conference. The red card represented the beginning of the Union’s dominance over the match. Henry could not adapt tactically to prevent the onslaught that Philadelphia brought to them. Perhaps there were changes he could have made to alter the scoreline, but with such a significant amount of possession and chances created for the Union, there would only be one winner.

With the conclusion of the match being a 4-1 victory for the Union, it makes the gap between them and the chasing Impact even bigger. This is a match that Quioto wishes he had back.