The MLS season is back underway as the league looks to play catch-up. This match analysis will cover two sides that have great pedigree due to their exciting players and playing styles. In terms of positions, the Seattle Sounders and LAFC sit second and seventh respectively in the western conference of the MLS.

The Seattle Sounders have had a great start to the new season and are looking to be a threat to other teams in the league. Only Sporting Kansas City have more points than the Sounders, yet Seattle have one more game to play in order to close the small gap. They will be striving for more success this year after a disappointing exit in the “MLS is Back” tournament. Funnily enough, their exit fell to the hands of LAFC who beat the Sounders 4-1 in late July.

LAFC went past the Round of 16 in the tournament after registering the win against their western conference rivals. However, they fell to the hands of Orlando City (spearheaded by Luis Nani, formerly of Manchester United) in the quarterfinals, and this loss was difficult to take as it came to a penalty shootout. Despite the disappointment, LAFC had a strong showing. As they faced Seattle Sounders in their latest fixture, they were looking to replicate the result which ended in a victory a month ago.

This tactical analysis and match report will examine the tactics of the Seattle Sounders and LAFC as the Sounders registered a 3-1 victory. 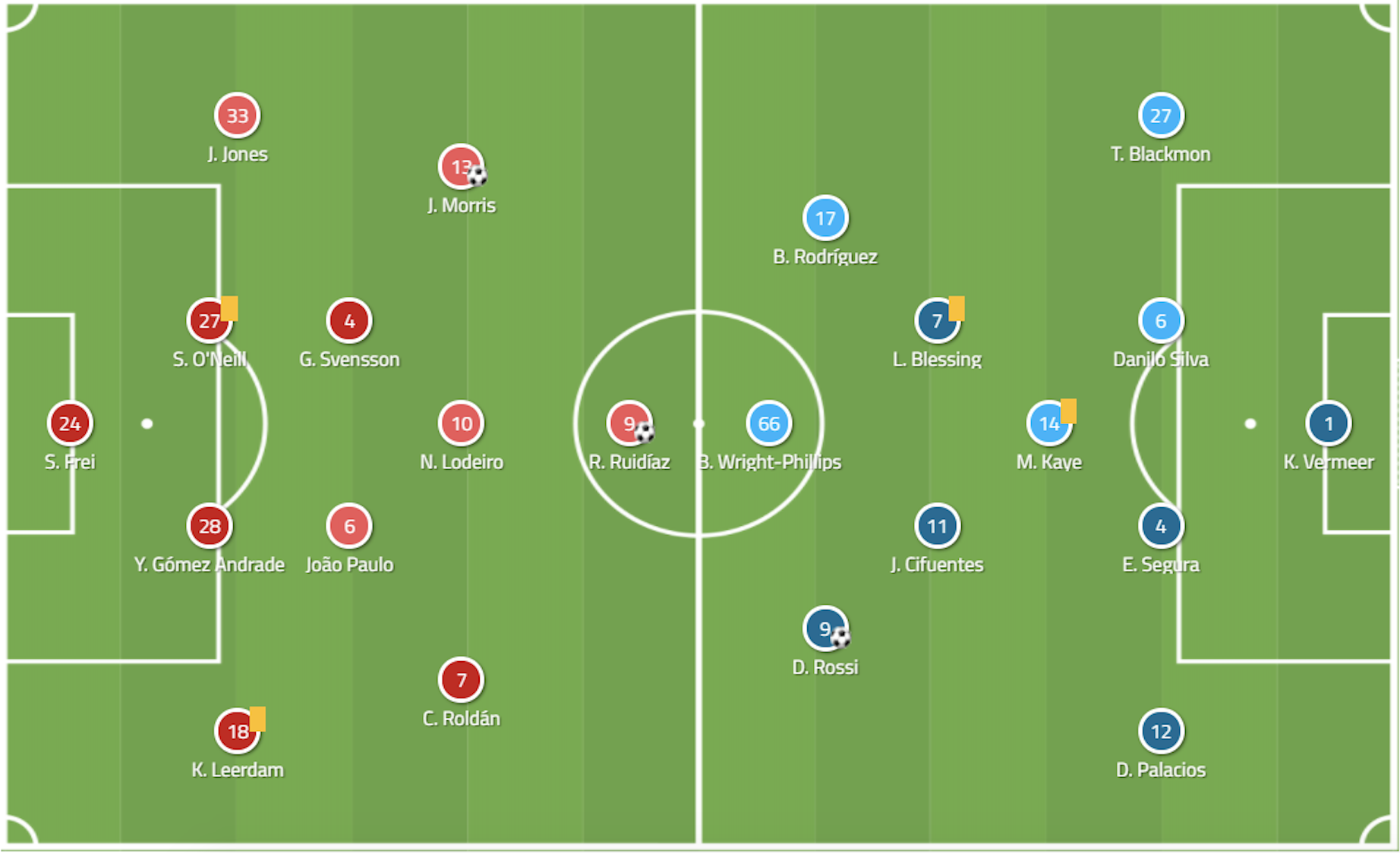 Bob Bradley, manager of LAFC, started his preferred 4-3-3 formation for the match. One of the biggest omissions from the squad was the league’s leading goal scorer last season, Carlos Vela. Vela, who has played for clubs like Arsenal and Barcelona, was left out due to a knee injury that will see him out indefinitely. In that case, Bradley was forced to changed his side to include Bradley Wright-Phillips as the main striker with Diego Rossi and Brian Rodriguez playing on the wings. Behind them was a balanced midfield three that possesses a lot of energy, particularly Latif Blessing, who has both defensive and attacking capabilities. In defence, Bradley went with a standard four at the back. However, LAFC are known much more for their goal-scoring prowess, not their defensive record.

The Seattle Sounders started in a 4-3-2-1, a formation that has proven to be successful thus far in the MLS season. Their main man, Jordan Morris, started on the left wing as he looked to provide goals and assists to help his side. The two pivot players in the midfield completed the balance of the side and helped clog the middle of the pitch. Tactically, there were no surprises from the Seattle Sounders.

One of the key tactics which had a major effect on the match was LAFC’s defensive style. Bradley and LAFC pride themselves off of high energy performances, particularly when playing at their home stadium full of fans. Although the fans are absent, LAFC stays true to their footballing identity. One way they implement high energy is through their pressing system which focuses on closing down the opposing ball carrier quickly. The pressing philosophy closely mirrors Manchester City under Pep Guardiola. The main goal is to win the ball back in the opponent’s defensive third in order to be in a position to attack quickly when winning the ball in transition. LAFC are very good at this because of the midfielders they possess as well as the quick nature of their forwards.

In order to achieve maximum results, it is important to be close to the opposing player with the ball. Therefore, a high block is needed to compress the space effectively. By holding a high line, LAFC will (theoretically) be able to control the space better if implemented effectively. Later in this analysis, we will explain how LAFC’s high line was not as effective as Bradley had planned.

The image below shows just how high LAFC were throughout the match, with the two centre-backs being the only players who were not stationed in the opponents’ half of the pitch. This positioning map could be compared to many matches that Bayern Munich played, as they are a top tier team implementing these tactics on the highest level. 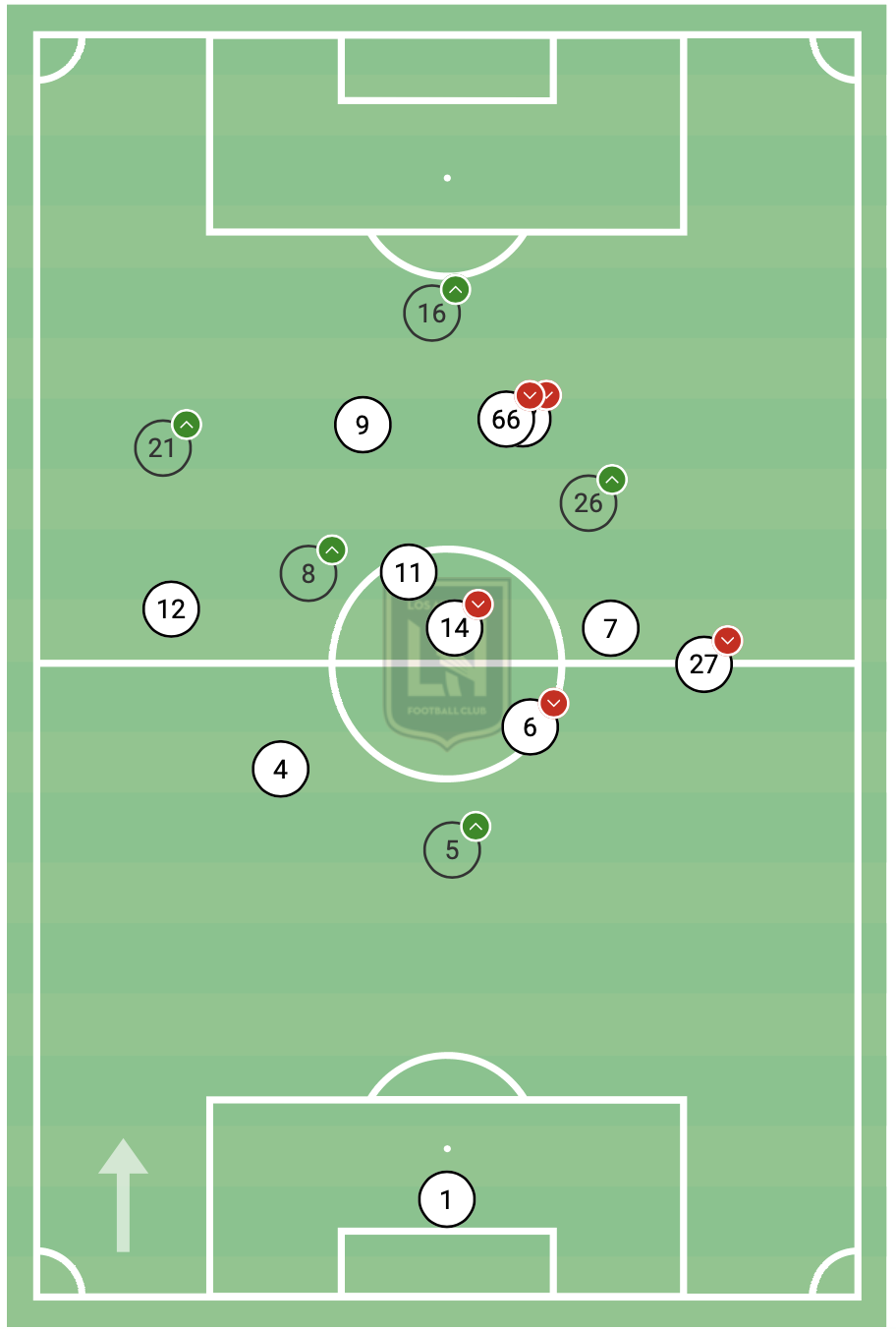 One of the important takeaways from the positioning map is the concentration of players in the centre of the pitch. LAFC wanted to control the centre section of the pitch in order to control most of the match in terms of possession. They succeeded in this due to the 60% possession they had during the match. However, as the match report will explain, Seattle worked their way around this disadvantage.

Below is an example of Bradley’s defensive tactics taking shape. Again, the three forwards are very close together hoping to win the ball back by moving together. This is important to note because in most scenarios, teams would be content with letting the opposing side play around the back in relatively unthreatening situations, but this is not how LAFC like to play. They want to turn their defensive tactics into attacking ones quickly during the transition. This showed in the statistics relating to transitions, where LAFC had 37 recoveries inside Seattle’s half, compared to Seattle’s 17 in LAFC’s half. 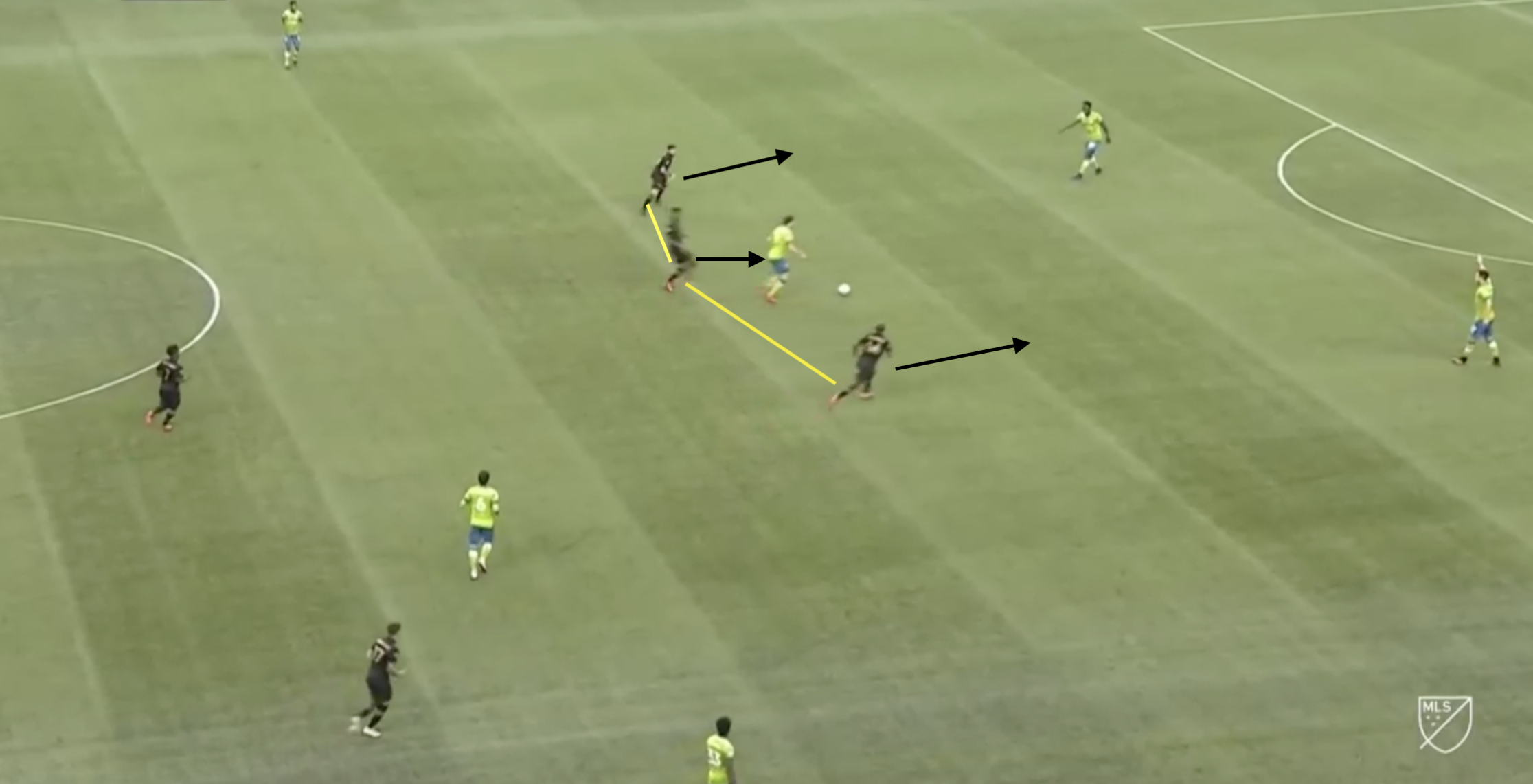 In order to combat the defensive tactics of LAFC, the Seattle Sounders had to get creative. They were comfortable giving up a majority of the possession because Brian Schmetzer, Seattle’s manager, planned accordingly. Schmetzer knew that LAFC would be focusing on condensing the middle of the pitch and push with a high block because that is LAFC’s style of play. Because LAFC condenses the space in their opponents’ half, there would be space in the wide areas for Seattle to exploit. Schmetzer achieved this in two ways.

The analysis below shows the first area of opportunity in wide areas. At this moment, LAFC have tried to win the ball through their defensive tactics, yet they force a long ball out of the Sounders keeper. Because of these actions, LAFC players are high up the pitch, centrally. This means there is an aerial duel that must take place between the forwards and the defenders. What is important are the players highlighted in the wide areas. If the ball is headed down to these areas, it will be incredibly dangerous for LAFC because they will be in a 2 v 1 situation. 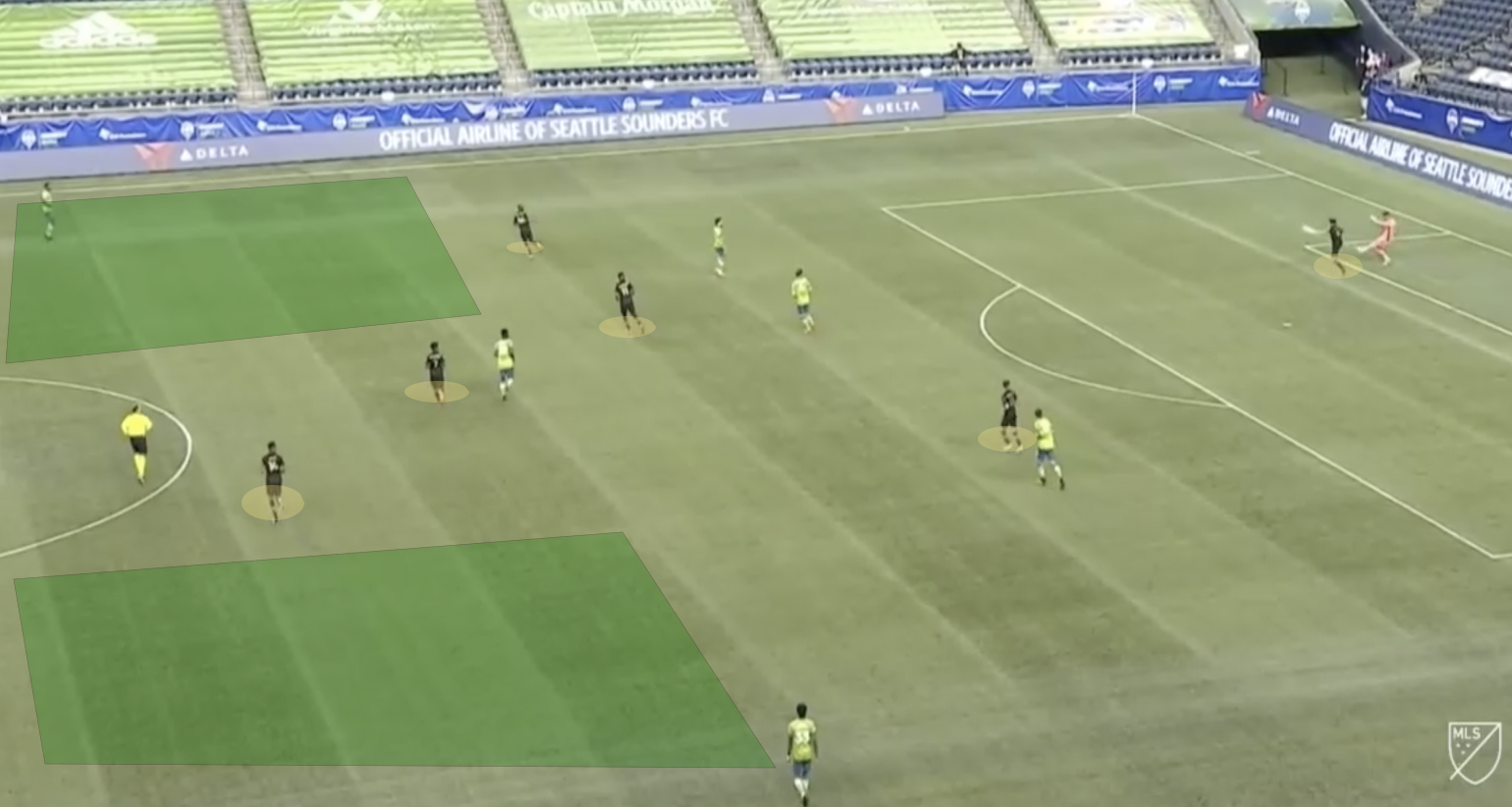 Instead of having to win the aerial duel to space the press of LAFC effectively, Schmetzer developed passing sequences that helped Seattle move from channel to channel on the pitch while opening up space incredibly well. Again, he utilises wide areas to be the catalyst for such tactics.

The sequence below shows exactly how this was done. The left-back, Joevin Jones, plays a pass into Morris who is checking into space. At this moment, Nicolás Lodeiro is waiting in the wide areas between LAFC’s right-winger and right-back. He finds a comfortable pocket of space in order to receive the pass. 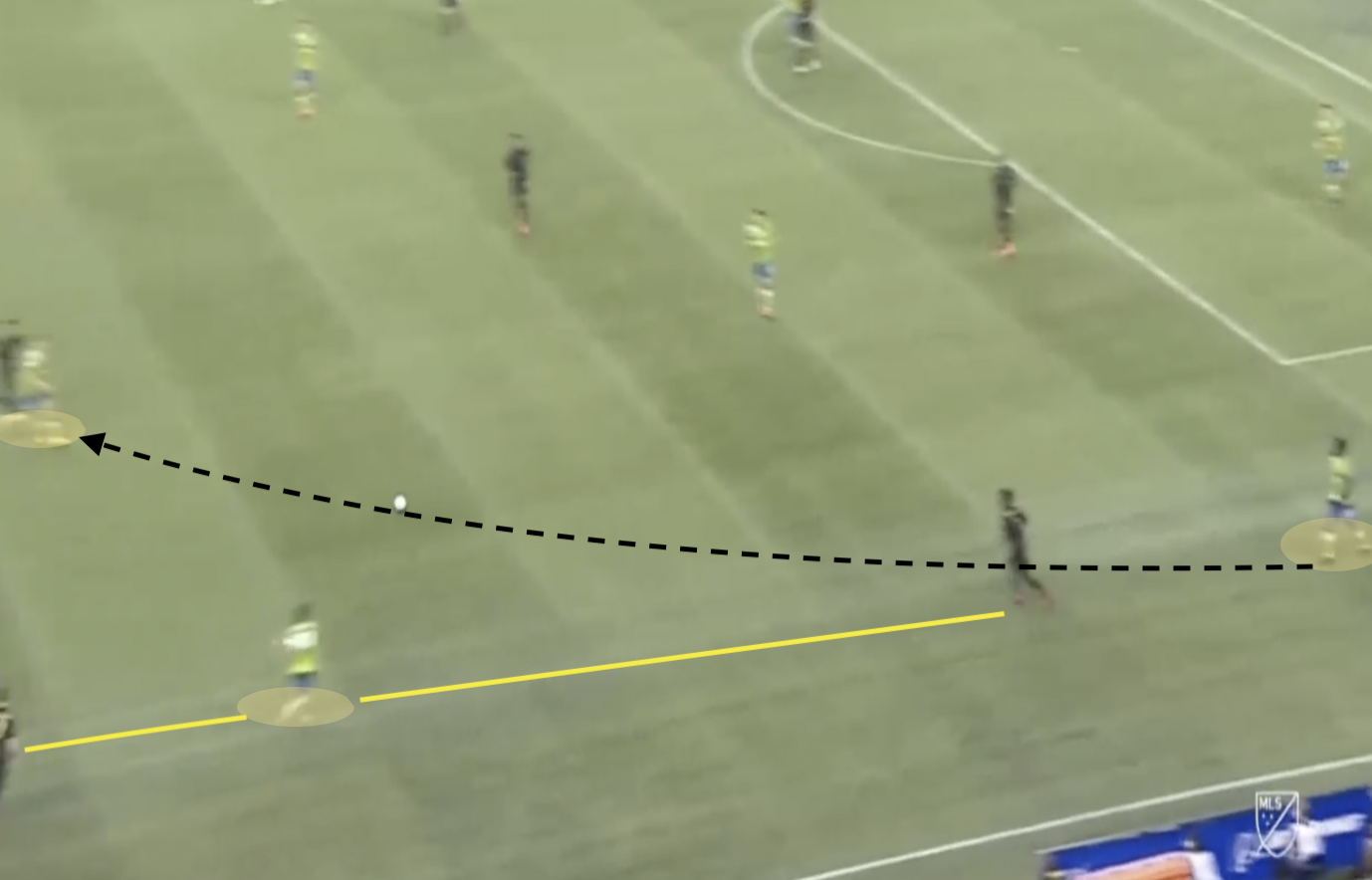 At this moment, a lateral pass to the central area of the pitch becomes available. The reason this space is available is that Seattle drew LAFC over to that side of the pitch effectively. They know that LAFC will pursue the ball and with the right passing sequences, they can pull LAFC out of position. This is what happens in this scenario. While it is not easy, when executed, you can see the amount of space that opens up for the Sounders. 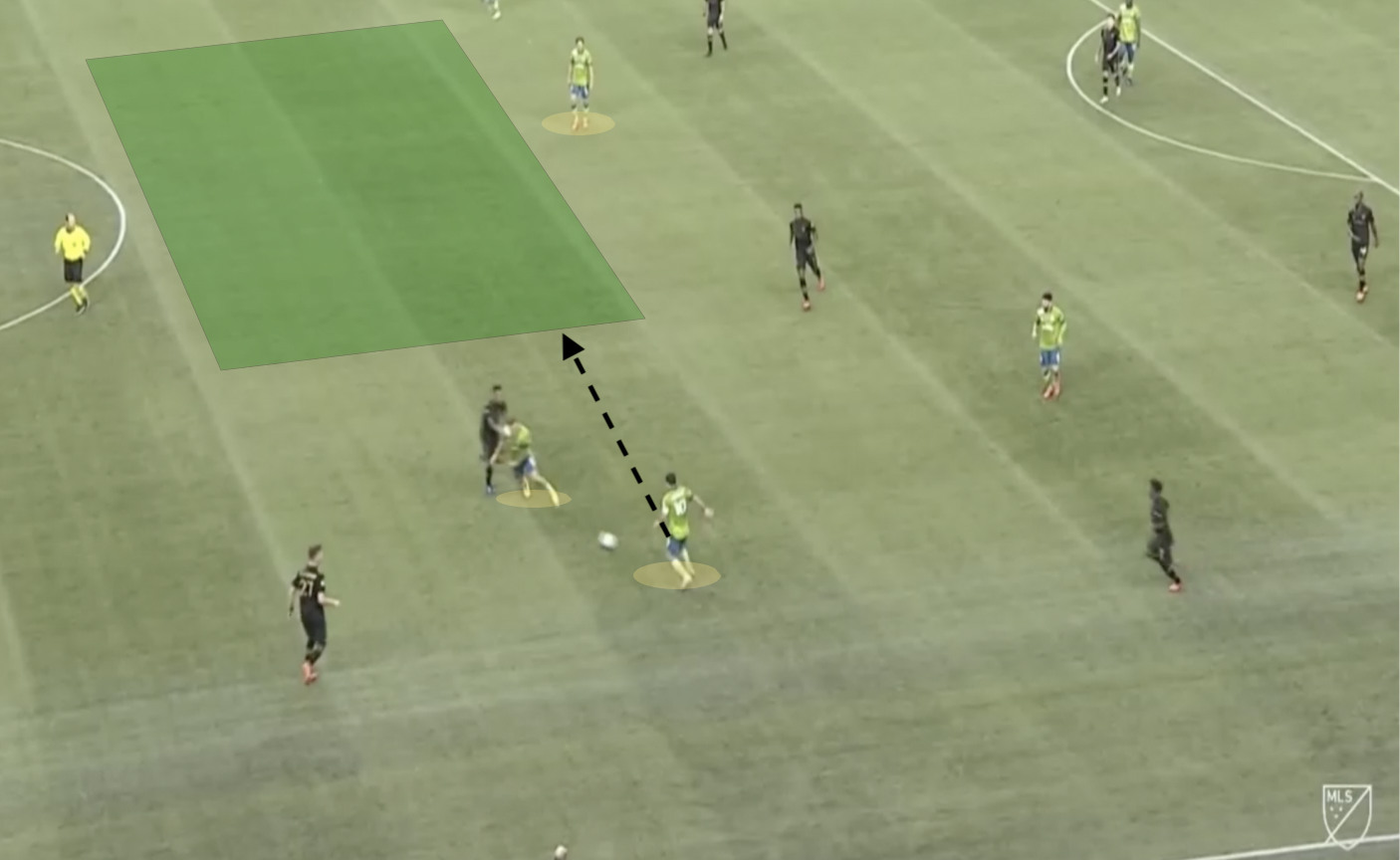 Again, this results in Seattle having very favourable numbers going forward as they effectively beat the defensive tactics of Bradley. 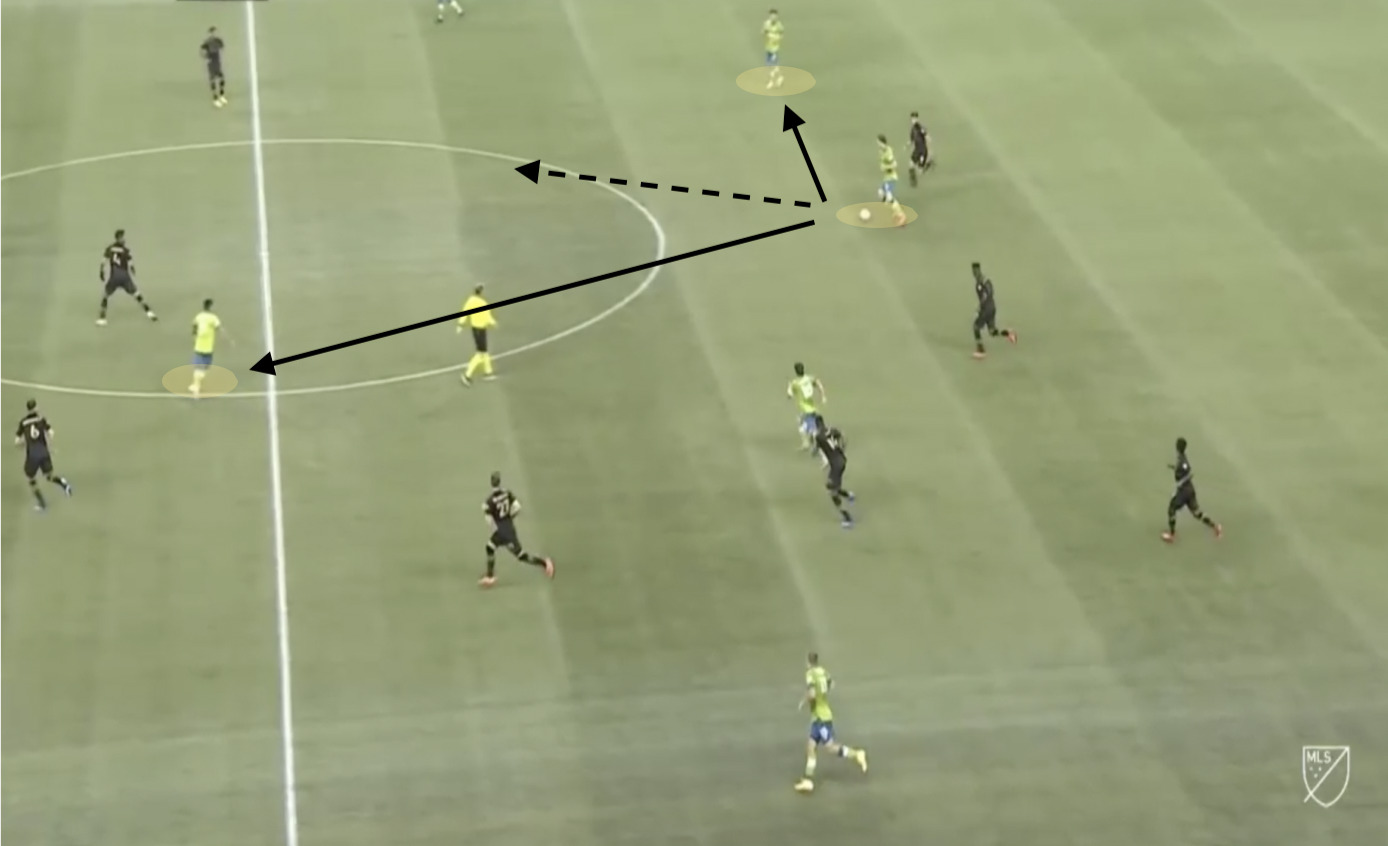 While it is unusual to highlight a keeper’s performance so specifically in a match analysis that primarily focuses on the tactics of open play, this match was different. Kenneth Vermeer had a night to forget which left his teammates bewildered. Vermeer faced 10 shots during the match, but only three were on target. As the scoreline suggests, all three shots on target were goals. This means that the Dutch keeper made no saves when being tested against the Seattle Sounders.

The main reason for his poor performance was his positioning during the match. Because of LAFC’s high line, Vermeer naturally comes off his line in a more sweeper role, similar to Manuel Neuer at Bayern Munich. However, there were moments during the match when his judgment was ineffective, which ended up costing the team from LA.

The first occurred against the run of play as LAFC was pushed high up the pitch. After a quick transition and progressive pass towards the forwards of the Seattle Sounders, the ball pinballed around the top of the eighteen yard box. Raúl Ruidíaz was aware of the situation and could see that Vermeer was off-centred and off his line. The image below shows Ruidiaz just moments before he strikes the ball which would end up in the back of the net due to Vermeer’s positioning. 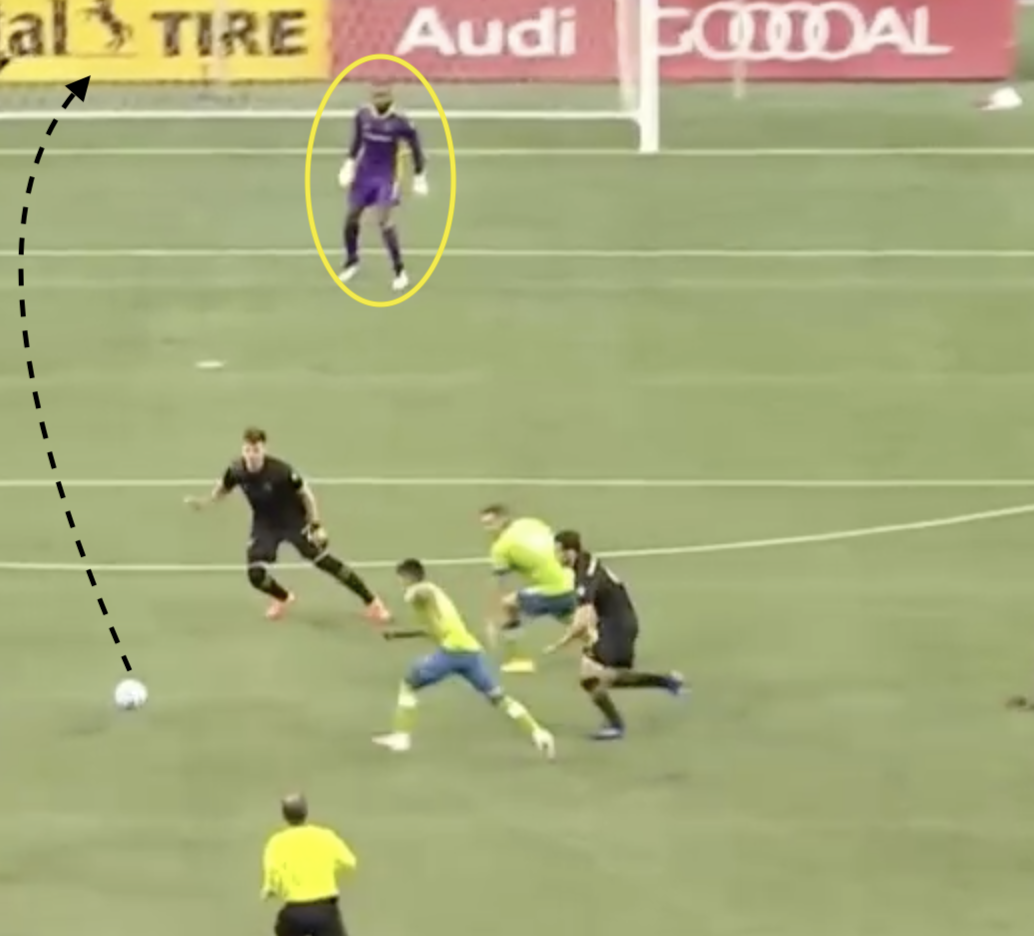 The second instance occurred in the second half when Morris was clean through on goal. In the image below, you can see the amount of space Morris still needed to cover in order to get a high percentage chance on goal. There was still time for the defenders of LAFC to potentially get back to make a goal-saving tackle. However, Vermeer’s poor judgment resulted in yet another goal for the Sounders. Morris comfortably dribbles around the keeper and passes it into the back of the net.

Again, while it is uncommon to critique a goalkeeper’s performance in match analysis, these moments were the difference between LAFC gaining points out of this match. Other than the two goals they conceded from poor keeper decisions, LAFC were in control for most of the 90 minutes.

The match between the Seattle Sounders and LAFC was incredibly entertaining because of the attacking nature of LAFC. While they could not make the most of the ball possession, they did press the Sounders well. With better execution in front of the goal, the scoreline could have been different. What was fascinating tactically was the way Seattle worked around the press extremely well by navigating the wings and switching the play multiple times throughout the match. They had different tactics which provided key variety in their play. Therefore, it was much harder for Bradley to target one specific tactic from Seattle while keeping his philosophy intact. Unfortunately for Bradley, his tactics were not enough as Seattle scored three goals, two of which the keeper was the suspect.