Traditionally the last day of MLS regular season is called Decision Day. Multiple teams Eastern Conference had one more chance to either clinch a playoff spot or jockey for better seeding. Orlando City SC welcomed Nashville SC to Florida in a matchup between two teams that have already clinched their spots in the postseason.

Led by Colombian Oscar Pareja, Orlando was sitting in third place and preparing for their first playoff run in club history. The Lions had won their previous three matches, scoring seven goals against the likes of Atlanta, Montreal and Columbus. With a victory against the visitors, Orlando would be able to hold on to third place. The Lions would also be able to extend their unbeaten streak at home.

One of the new expansion sides this season, Nashville SC has exceeded expectations by making the postseason. Since their 3-0 victory against FC Dallas in October, the Music City side had a four-game stretch where they tied twice and won against Montreal. Nashville had the opportunity to finish in sixth place if they won and had results go their way.

At the end of the match, Nashville SC was able to sneak away with a victory at the end. This tactical analysis will look at the tactics used by each side in this match or contrasting styles.

Usually playing in a very attack-minded 4-4-2, the Lions moved their usual suspects around slightly to adjust to Nashville. Pareja started one of the league’s most potent attacking tridents. Daryl Dike, Chris Mueller, and former Manchester United winger Nani have scored 20 goals between them in this shortened season. They also have chipped in with a total of 10 assists, with Mueller as the leading assist provider at six. 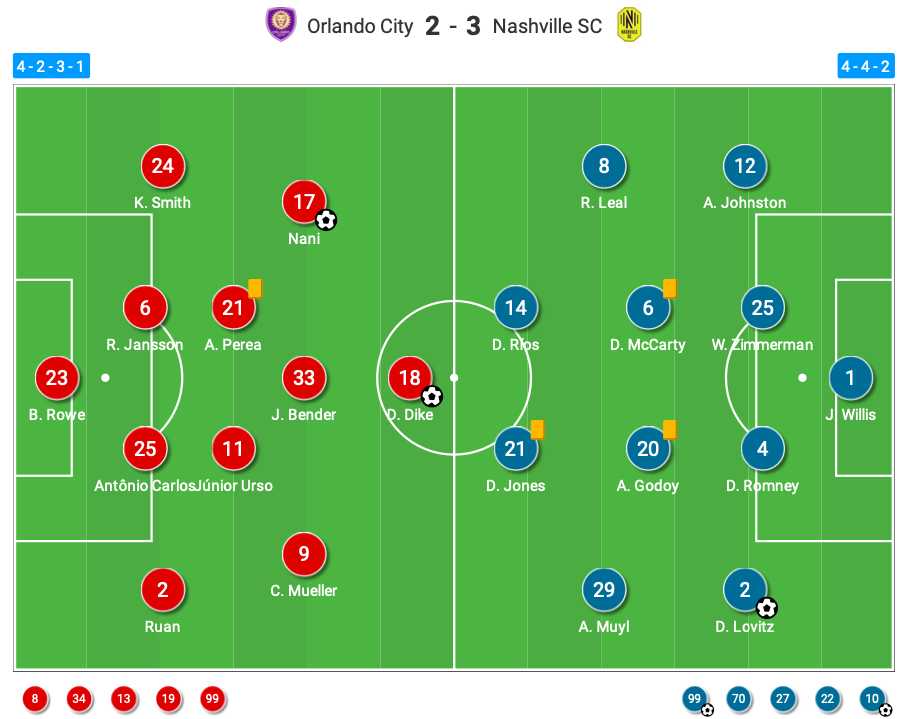 After switching it up last week with a 3-5-2 against Dallas, Gary Smith reverted back to his trusted 4-4-2. Boasting a defence as disciplined as Atletico Madrid, Nashville’s nine clean sheets are among the best defensive records in the league. With solid veterans such as Walker Zimmerman and goalkeeper Joe Willis, Nashville has been able to build on results and reach the playoffs in their first season.

Regardless of Orlando’s formation on paper, the reality is that their attackers are allowed to roam and combine with one another. This is specifically geared towards captain Nani and Chris Mueller as the wingers. At any given time, they could switch flanks, receive a ball in the centre, or create from the flanks. Using their average positioning below, we can see how this tactic gives Orlando a narrower shape. 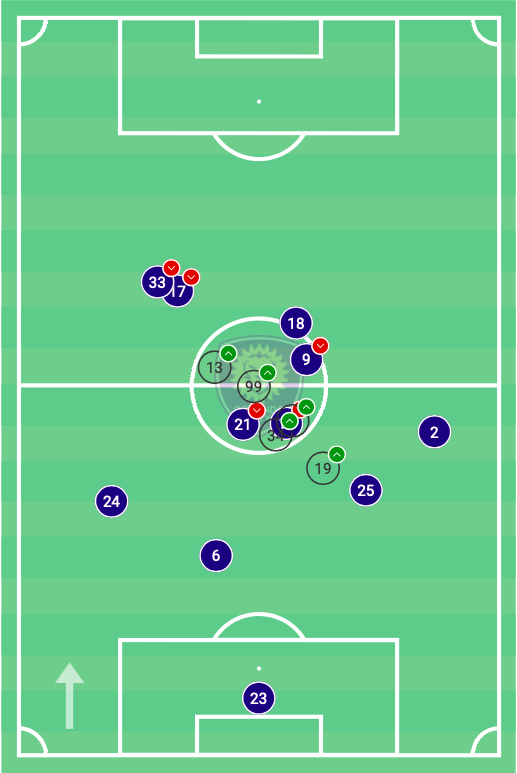 Giving the players creative freedom also aids in where the team could potentially attack. Looking at the analysis of their attacking preference, Orlando City attacked the visitors in each area. While the right side was not attacked as much as the left or the centre, we can see that the expected goals (xG) were similar to the left flank. 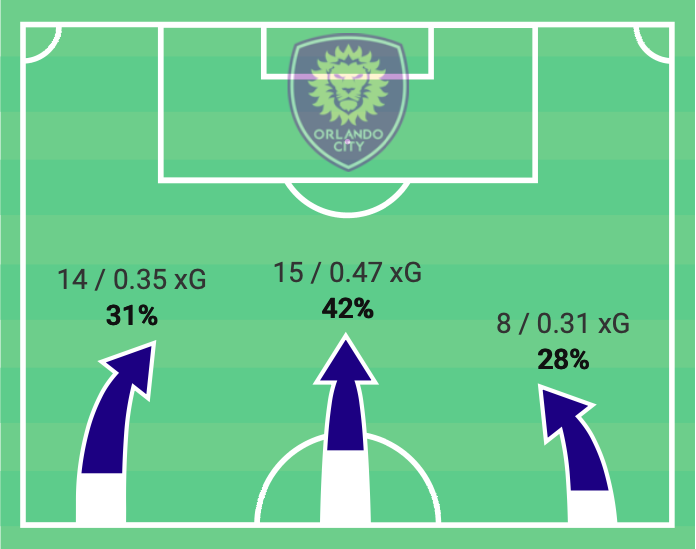 Using the following example from the first half, we can see exactly how this tactic looks like in-game. In the first image, we see Nani receiving the ball in the centre of the field. Mueller is in the right half-space, while Dike stays on the last defensive line as a target. 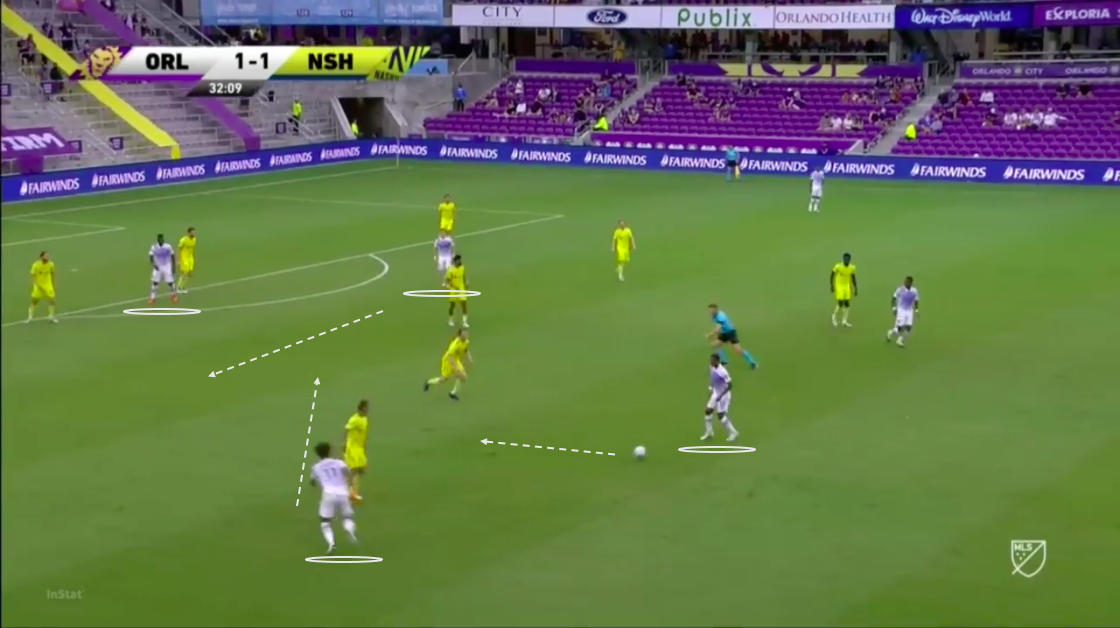 As Nani beats his defender and goes towards the left, Urso and Mueller crisscross their runs. The Portuguese’s forward movement attracts a defender, which gives Mueller a pocket of space to receive a pass. 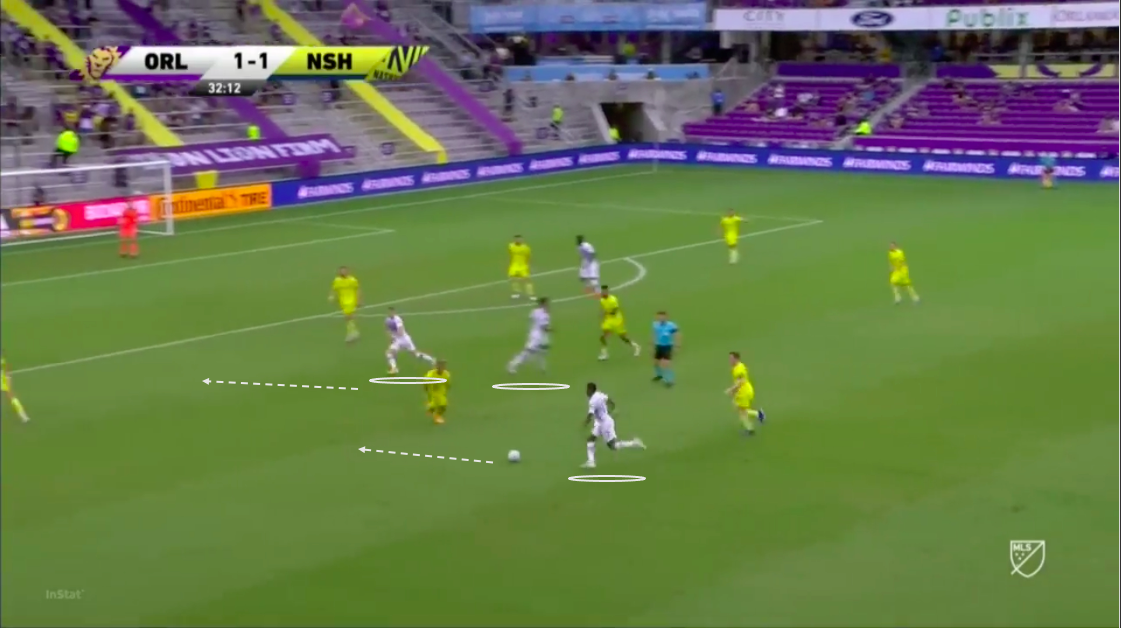 Attacking midfielder Bender had remained on the left flank, and with that Orlando created a 4 v 3 to their advantage. Mueller pauses for a second to assess his options and passes to Bender. 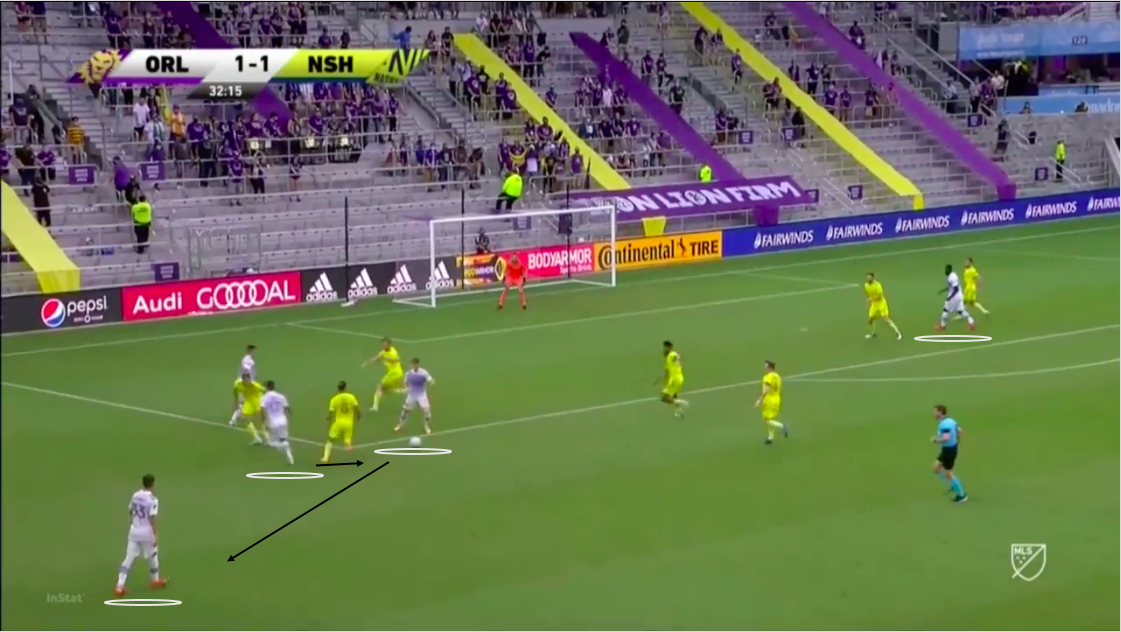 While Bender is on the ball, we can see that Orlando’s whirlwind of movement has stretched the Nashville defenders. The homegrown midfielder then has the time and space to easily pick out Dike, who forces the keeper into a save. 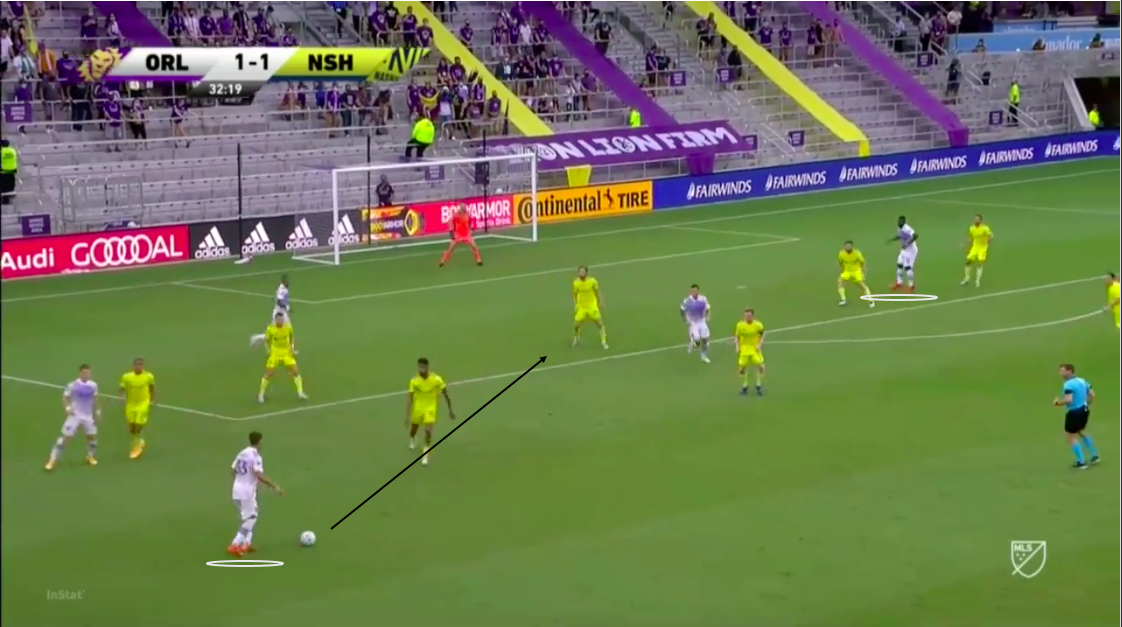 The Music City club made three substitutions to begin the second half. With the personnel changes also came a slight formation adjustment to a 4-4-1-1. Smith also opted for a more aggressive pressing scheme. This tactical change can be seen in the analysis of their pressing intensity below. 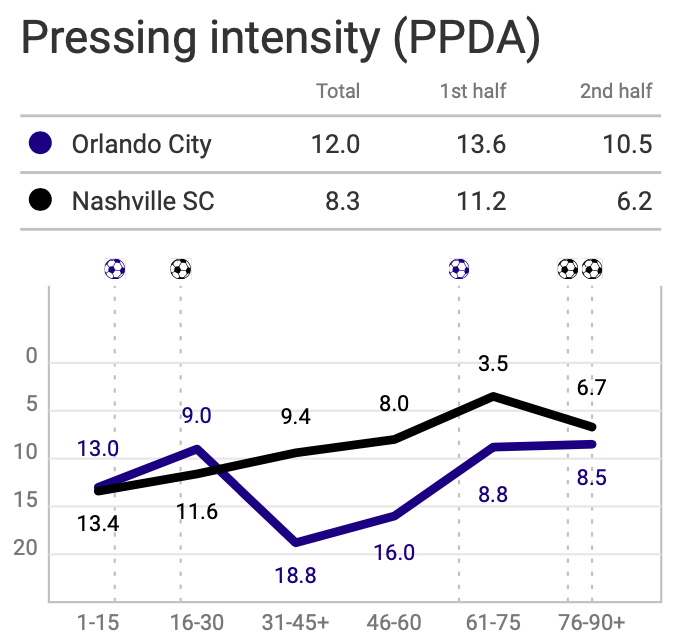 As they had nothing to lose, Nashville went for the win they needed. In the following section of the tactical analysis, we will see how the second half changes affected Nashville’s attack.

The visitors were kept on the back foot for the majority of the first half. With their halftime substitutions, Smith attempted to regain some attacking impetus. Looking at their average positions below, we can see that the midfield pairing of LaGrassa (22) and Anunga (27) were receiving the ball higher than McCarty (6) and Godoy (20). Adding Benfica loanee Cádiz gave Nashville a target man to stretch Orlando vertically. 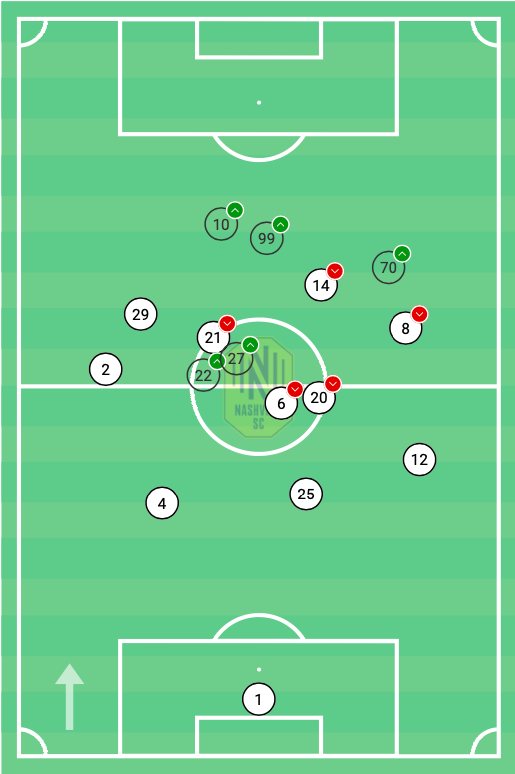 After only connecting on one of six crosses and only scoring from a poor clearance in the first half, something had to change. Looking at the analysis of their crosses in the second half, we can see that Nashville was able to attempt seven and connect three. 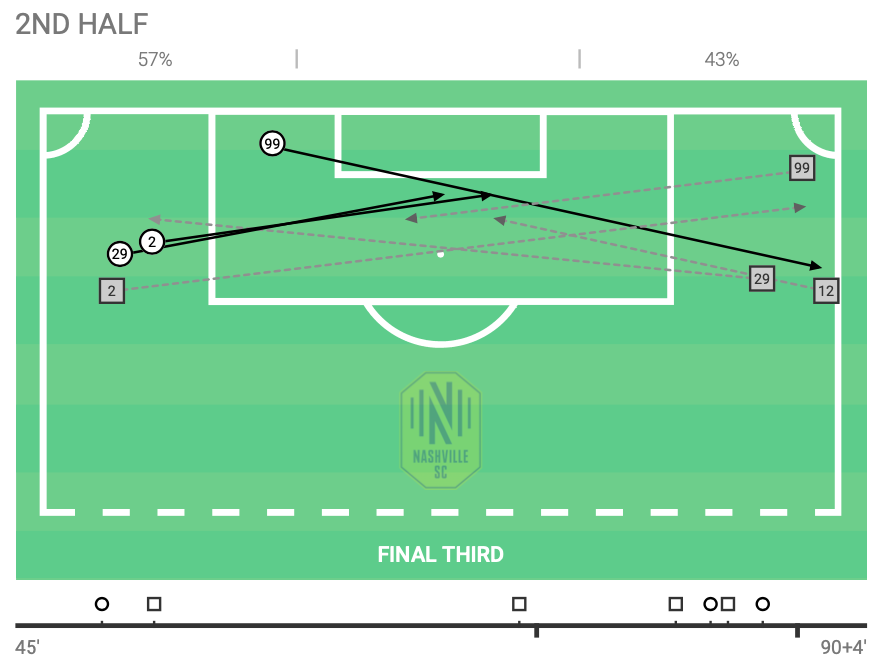 The equalizing goal came from one of these crosses. Nashville’s tactic was to create an overload on the right to isolate Lovitz and Muyl on the left-hand side. We see exactly how this worked out in the buildup to the equalizing goal. 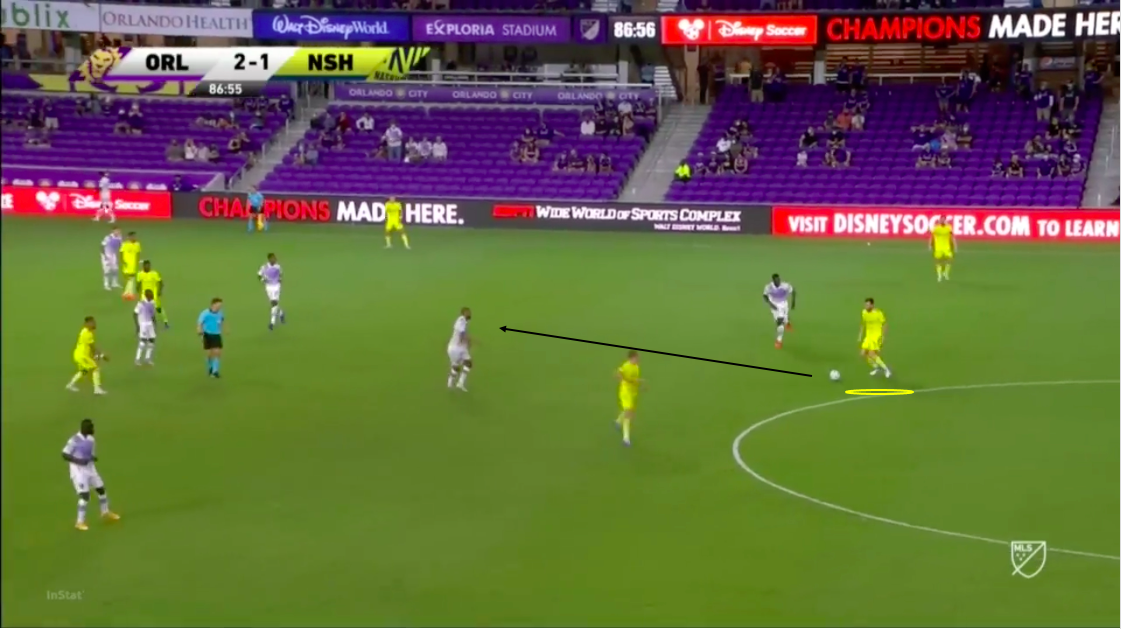 After receiving from a throw-in, centre back Romney draws Orlando’s defence towards him as he dribbles. He then has the time and space to accurately pick out Muyl, who is isolated against Orlando’s right back. 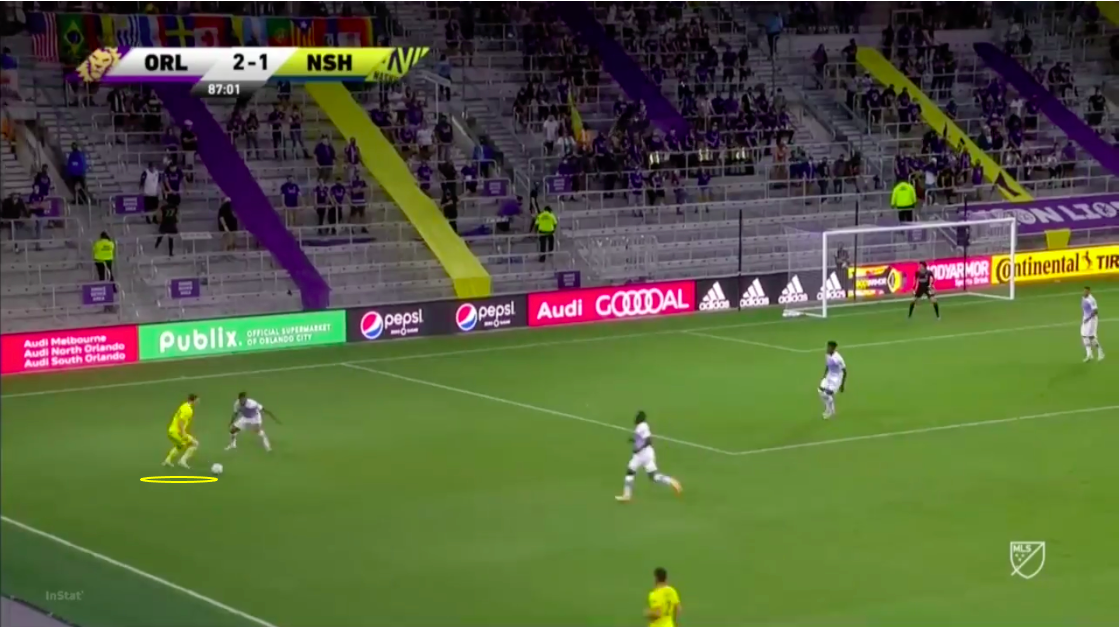 The defender allows Muyl to cut the ball back to his right foot and does not contest the cross. This combination of defensive miscues allows the left-winger to play a dangerous ball into the penalty area. While this is happening, Mukhtar has positioned himself between the two Orlando centre backs. 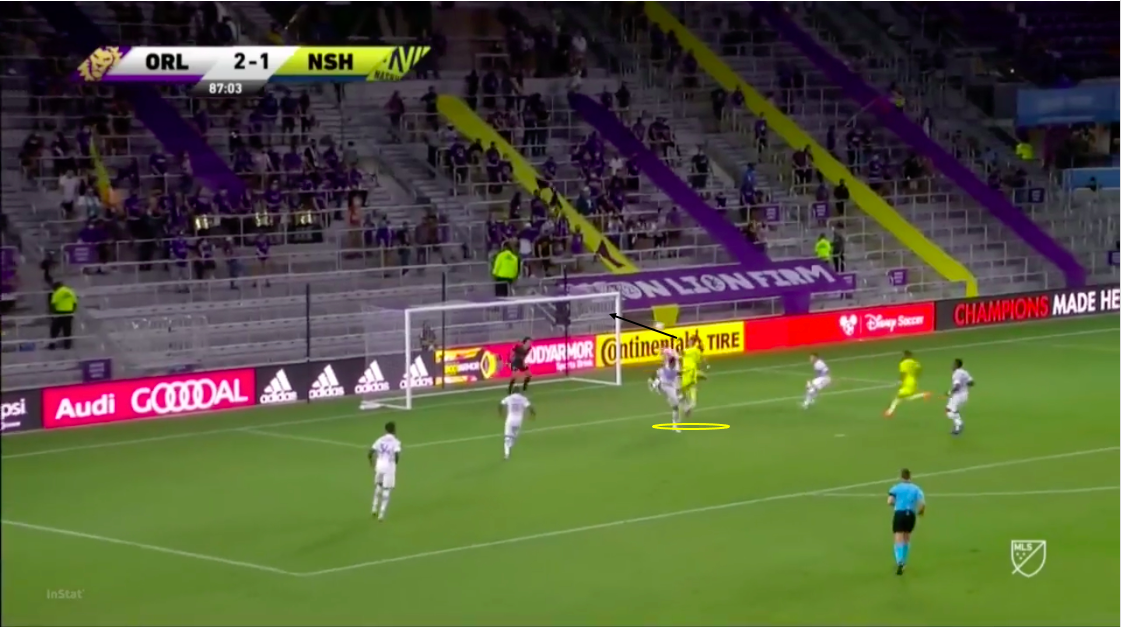 Although he has placed himself in the blindside of the ball side centre back, the far side defender does not close him down. Mukhtar then steers home the tying goal under low defensive pressure.

The Lions’ struggle with crosses and set pieces

For all of Orlando City’s attacking prowess, their inability to deal with set-pieces and crosses ultimately let them down. In open play the Lions were solid, only allowing nine shots spread throughout the game. Looking at the xG analysis of Nashville’s chances, we can see that of all their chances, the equalizer and the game-winner had the highest xG. 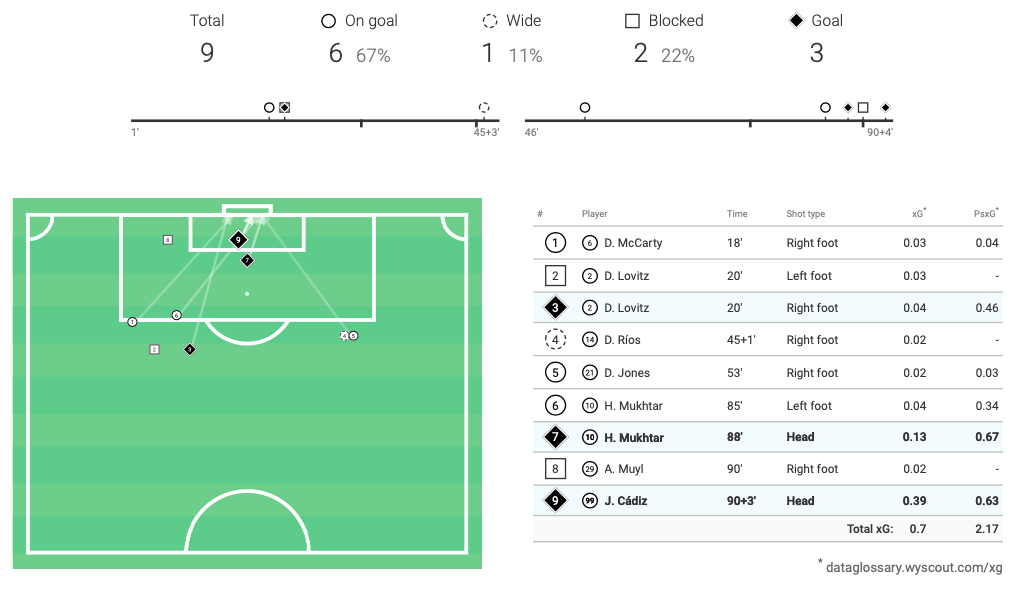 While we went over some of Orlando’s defensive miscues in the previous section, we will take a look at how they were unable to prevent the visitors’ final goal. We see that Antonio Carlos is matched up against Cádiz, and as the movement in the area begins, the Nashville forward slips into Carlos’ blindside. 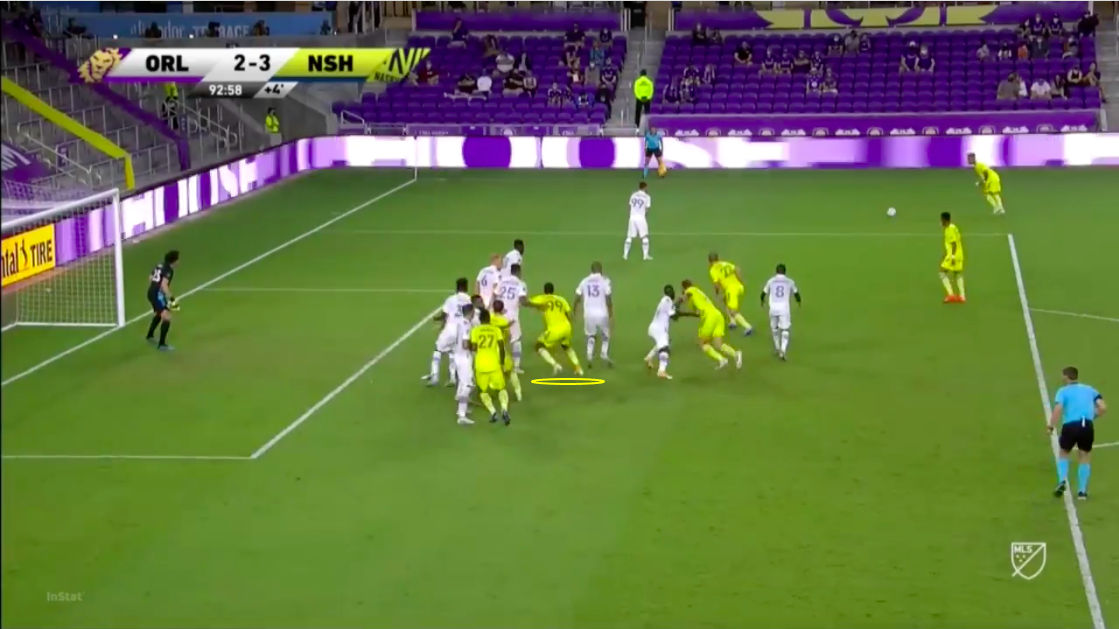 This movement is then paired with Romney moving to block not Antonio Carlos while tying up his own mark. The Orlando defenders are also caught ball watching, which allows Cádiz to go free near the six-yard box. 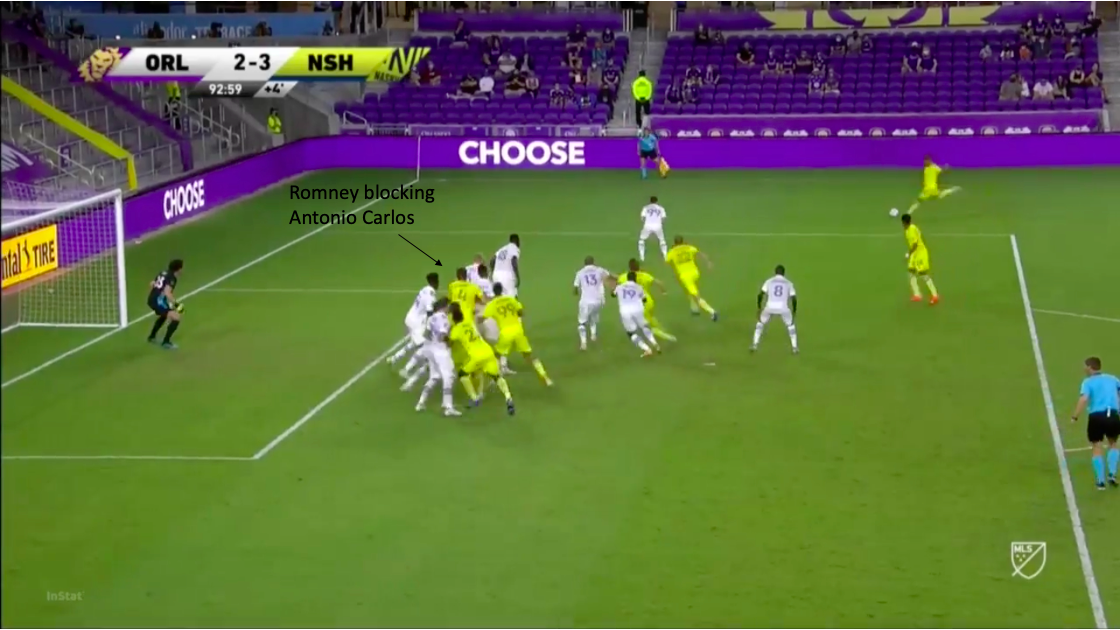 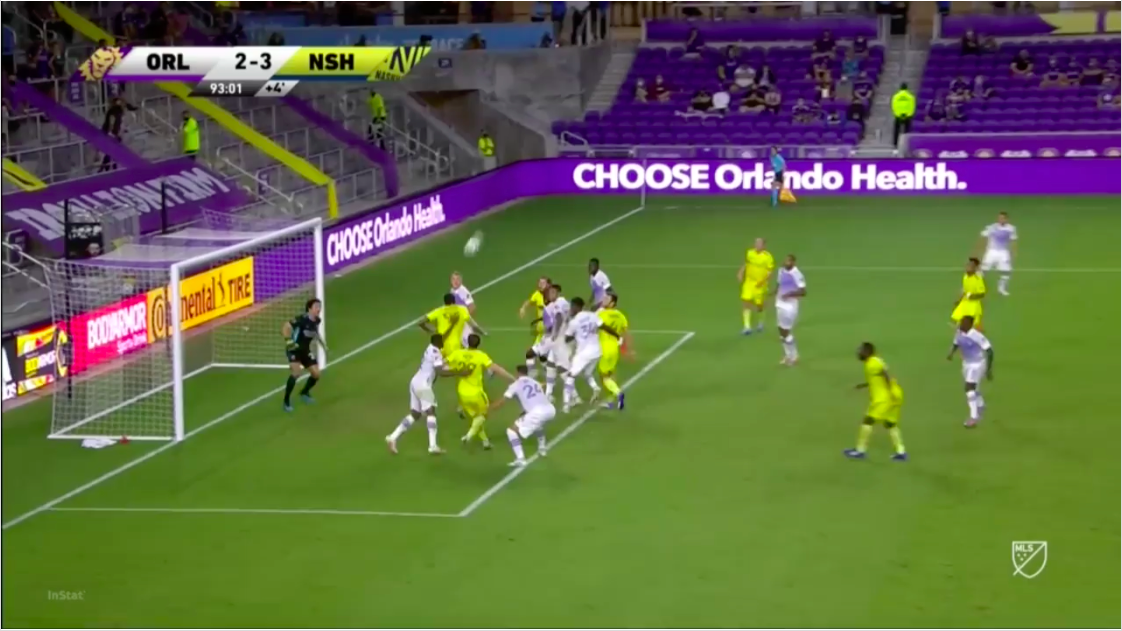 This combination of defensive miscues within the last five minutes of the match cost Orlando. With their upcoming playoff matches, it is something that must be rectified if they are to navigate deep into the postseason.

The matchup between one of the league’s best attacking and defensive sides finished with Nashville SC on top. Orlando City SC was not able to capitalize on their offensive dominance, and the visitors getting the goals they required. While they did get the victory they needed, Nashville remained in seventh place. This sets up a play in round against their fellow new kids on the block, Inter Miami.

Orlando dropped to fourth place in the East which means New York City FC in the first round of the playoffs. This matchup could be full of goals as both teams have quality in the attack. The Lions will look to lean on their attackers as they hope to make it to the finals in their maiden postseason journey.