In the penultimate round of MLS games, teams were battling for a chance at the playoffs. New kids on the block Nashville SC welcomed FC Dallas to middle Tennessee in their fourth matchup this season. While Nashville and Dallas have both qualified for postseason play, each team had something to play for.

Managed by Gary Smith, Nashville has enjoyed a good maiden season in the league. The Music City club was looking to extend their unbeaten home streak, which extends from February 29th. Three points would help the expansion side avoid the play-in game for the second round of the playoffs.

FC Dallas is primed for a second consecutive postseason run. After losing 3-0 to Nashville in their previous meeting, Dallas has gone on a three-match unbeaten run. A win for Luchi Gonzalez’s side would secure a bye from the first round of the playoffs.

Ultimately FC Dallas were able to secure the victory they needed, which propelled them to fourth in the Western Conference. This tactical analysis will look at how the North Texas club was able to pin Nashville SC for the better part of the game.

While not the flashiest, Gary Smith’s side has produced the results. Coming into this game, Nashville was unbeaten in the previous four matches, picking up eight points of the 12 available. Leading goal scorer Andy Ríos started up front alongside Costa Rican Randall Leal. At the heart of the defence, MLS veteran Walker Zimmerman started between Jack Maher and Dave Romney. 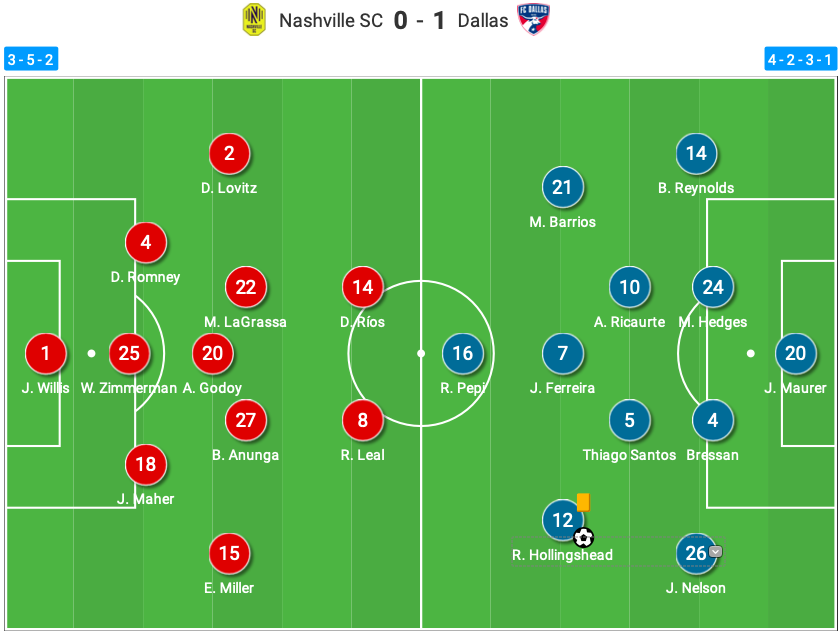 Luchi Gonzalez had to make a few personnel changes to his usual starting eleven. Leading goal scorer Franco Jara and left-winger Fafa Picault did not travel due to injury. Homegrown striker Ricardo Pepi was given his first start as the target man, while Johnny Nelson stepped in at left-back. This allowed Gonzalez to start the versatile Ryan Hollingshead at left wing. Naturally a defender, Hollingshead has found the net three times in the past 10 games.

The home side looked to pressure Dallas into mistakes, recovering the ball and establishing possession. Smith’s side understood that the visitors were technically capable, but would give up passes due to forced errors. We can see in the pressing analysis below that Nashville steadily pressed Dallas throughout the match. 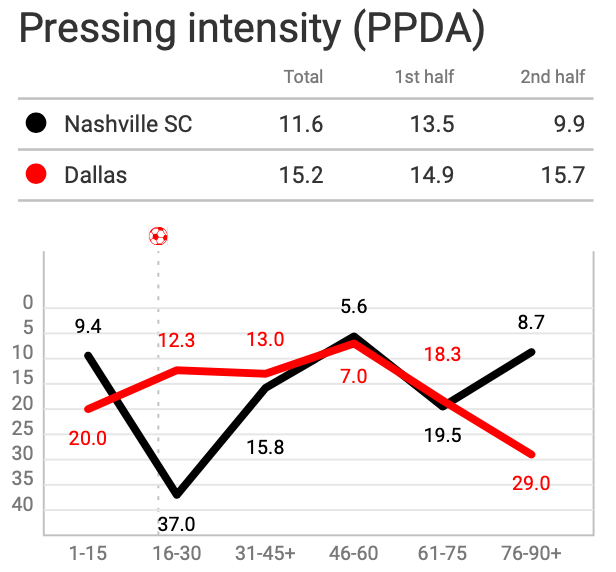 The tactic behind their press was baiting the visitors into thinking the passing lane was clear, before intercepting the ball. We will use this sequence from the first half as an example. 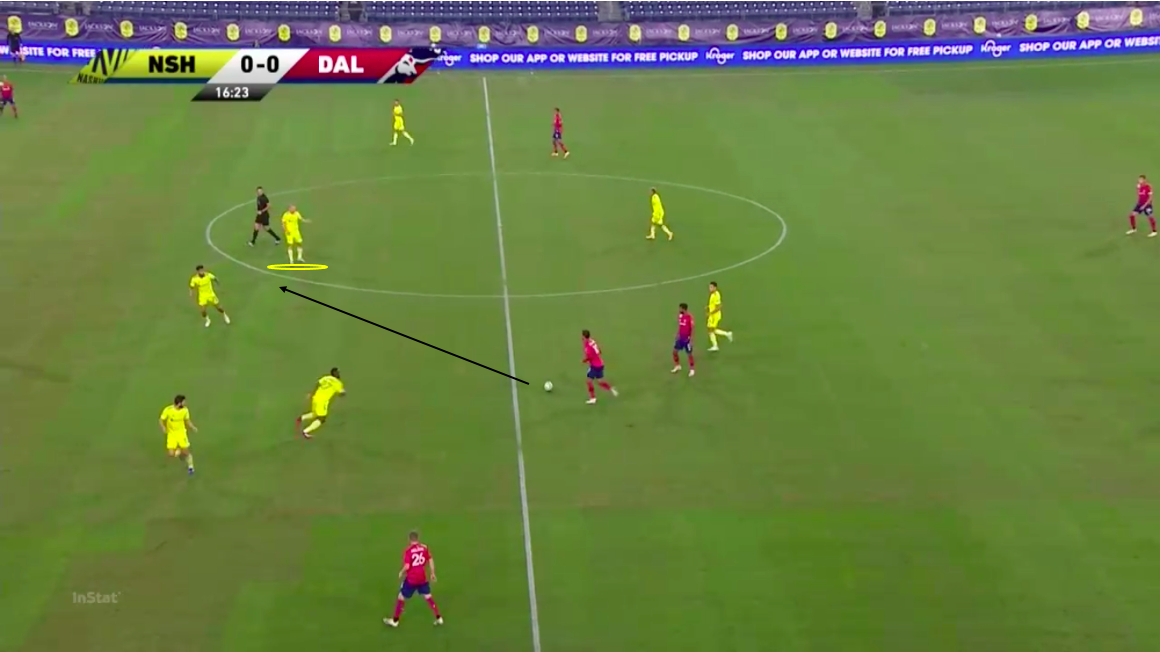 As Ricaurte is looking forward to Ferreira, LaGrassa’s body language shows disinterest in the potential pass. This baits the Dallas player to play the through ball, but it is quickly intercepted. 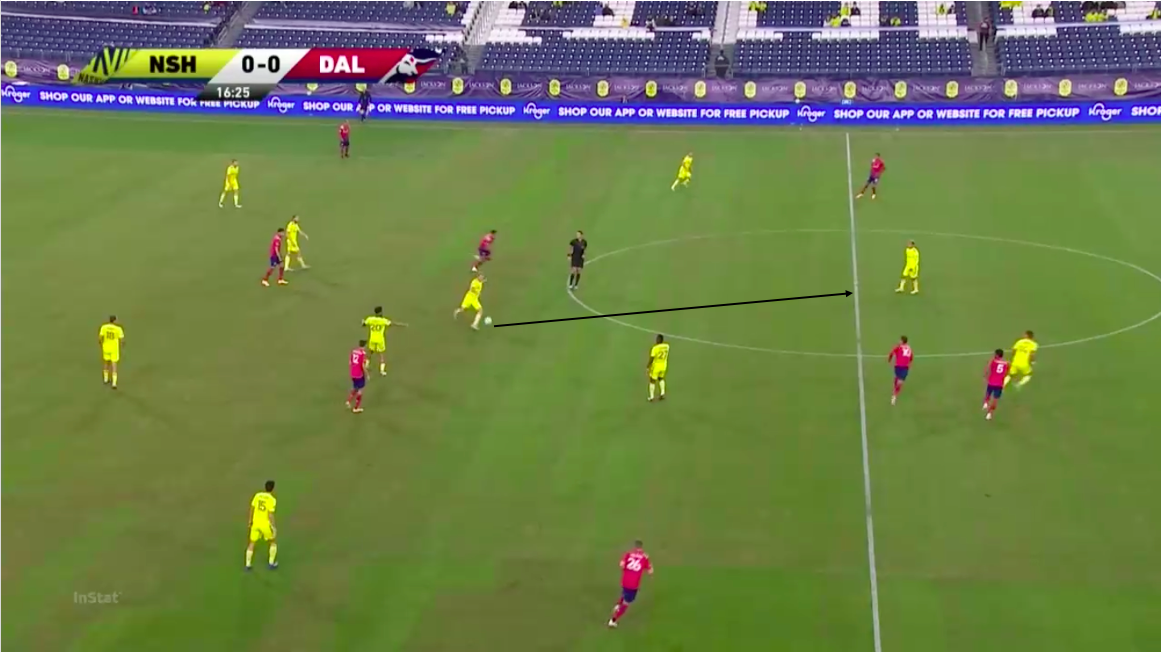 LaGrassa then plays forward to Leal, who is forced backwards by the Dallas defenders. The ball finds its way to Godoy, who is then able to get the ball to Lovitz on the left. 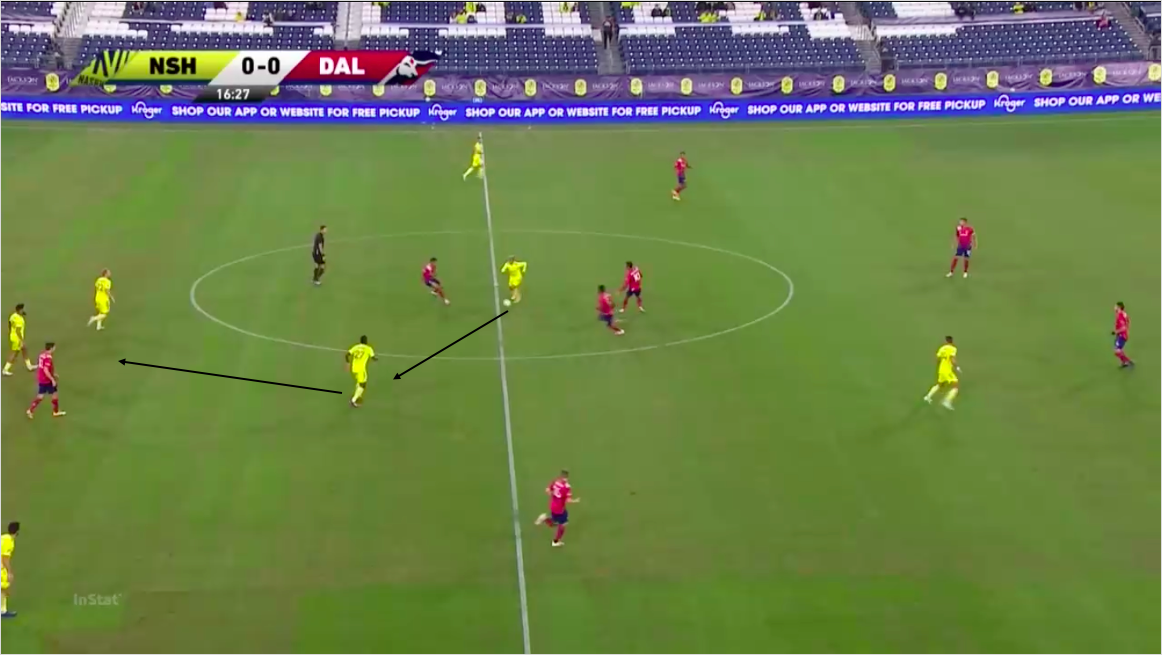 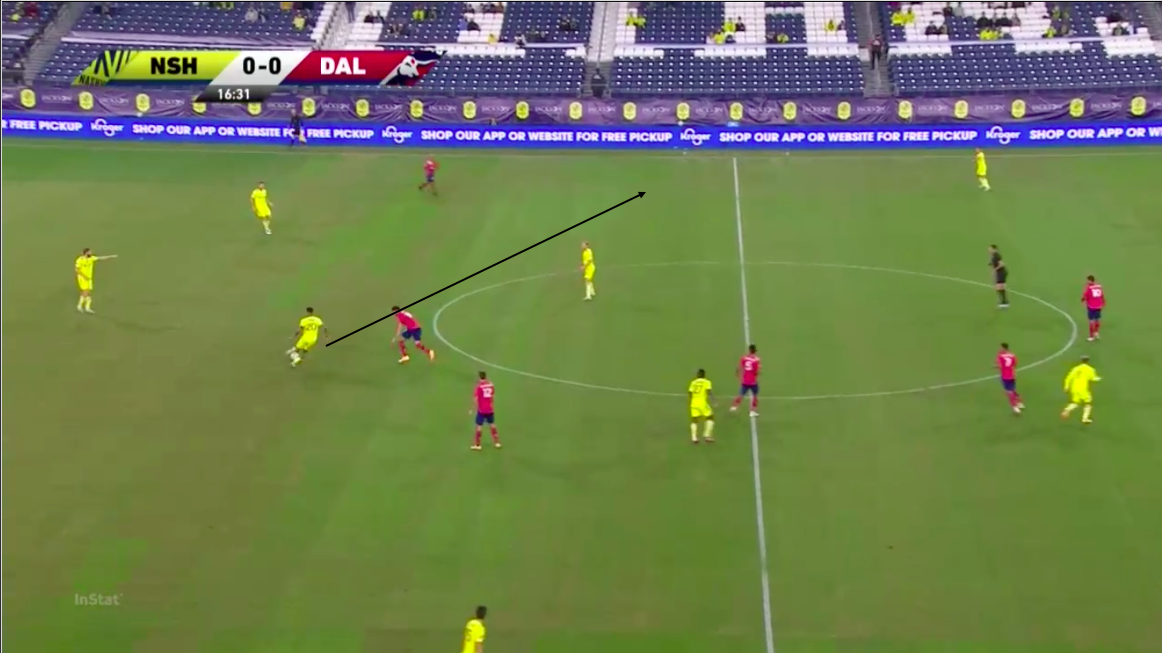 The idea of using two forwards is to prevent the opposition from finding passes into their midfield. Nashville was unable to do so from time to time. Due to a combination of Thiago Santos’ movement off the ball, and ball watching, we see below how easily Dallas was able to play through. 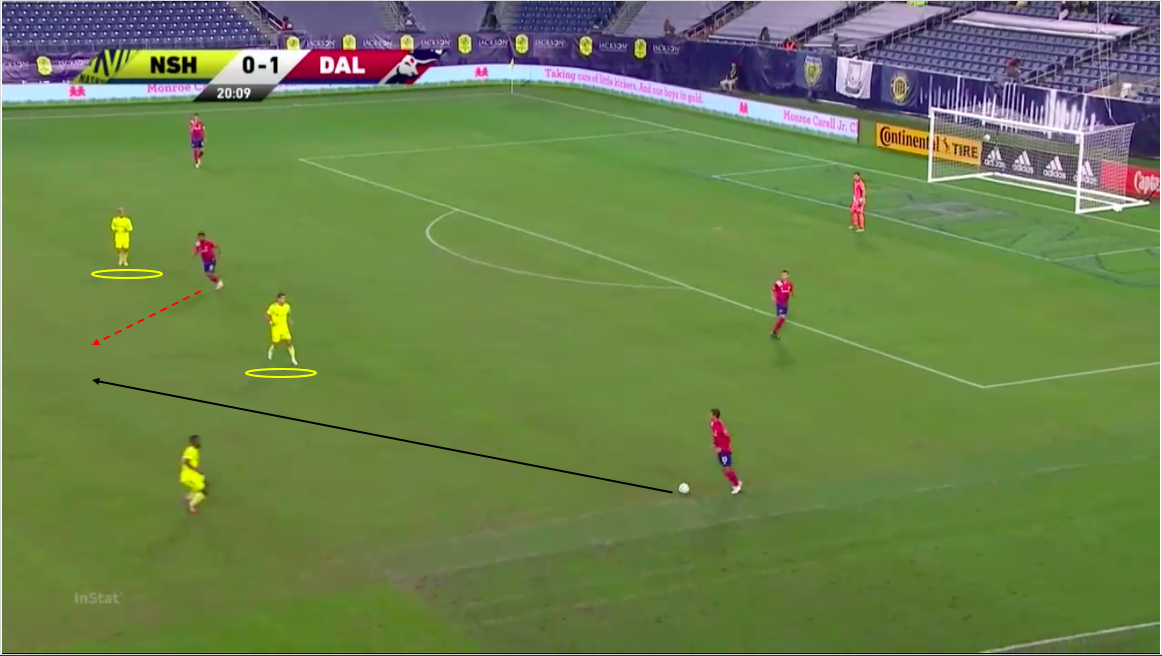 We can see as Ricaurte receives the ball, Santos positions himself between Leal and Ríos. The two forwards continue to shift as they watch the ball, and Leal does not react to Santos’ movement. 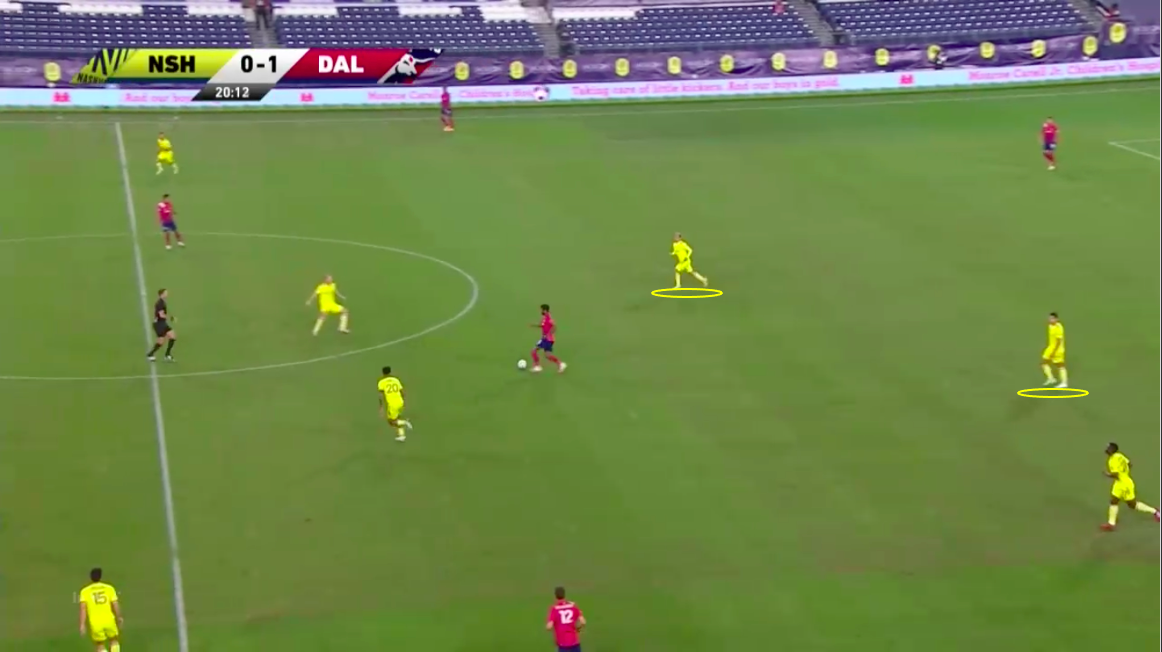 This enables Ricaurte to play a ball past the first pressing line, and Dallas is able to cut through the Nashville defence on their way to creating a chance.

If Nashville uses a two forward system again, this type of defensive miscue must be rectified.

FC Dallas typically maintains their 4-2-3-1 throughout a match. In a tactic similar to Bayern Munich, one midfielder splits the centre backs allowing the outside backs to move higher up the field. The difference this game being the starting position for Hollingshead. 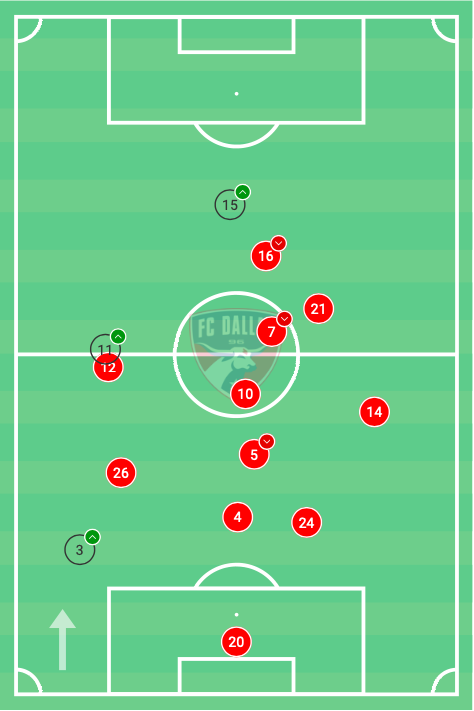 Since he is already tasked with creating chances, the left-back is comfortable in the attacking phase of the game. Gonzalez was able to give him a bit more freedom going forwards by starting Nelson at left-back. As we can see in their average positioning above, FC Dallas operated in a 3-4-3 going in the attacking phase.

One of the ways they were able to consistently attack Nashville was by attacking the back three. After the first half, Gonzalez opted to double down on this by using the pacey Pepi and Barrios as forwards. We can see the evolution of the Dallas formation throughout the match below. 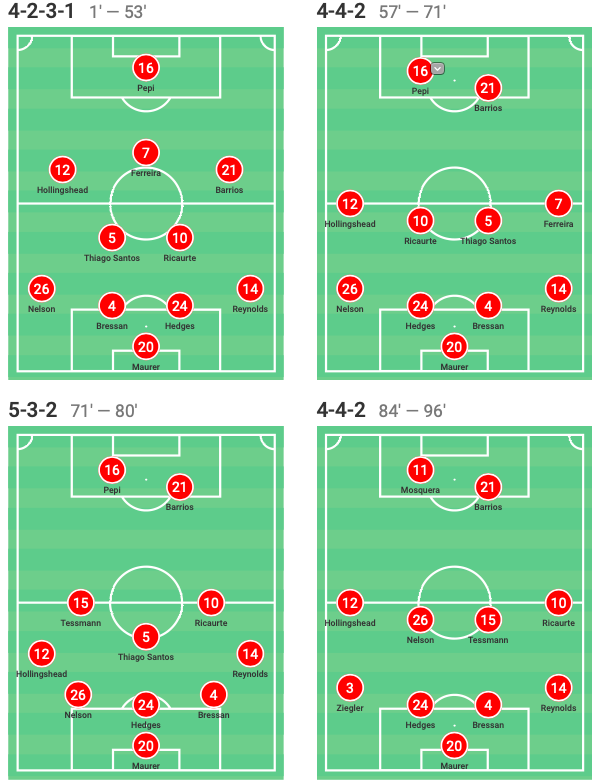 Using an example from their goal, we can see one of the ways they attacked the back three. After playing through the press, Ricaurte is able to pass the ball to Ferreira. Since Nashville was caught with a high line, Barrios, Pepi, and Hollingshead made their runs at all three defenders. 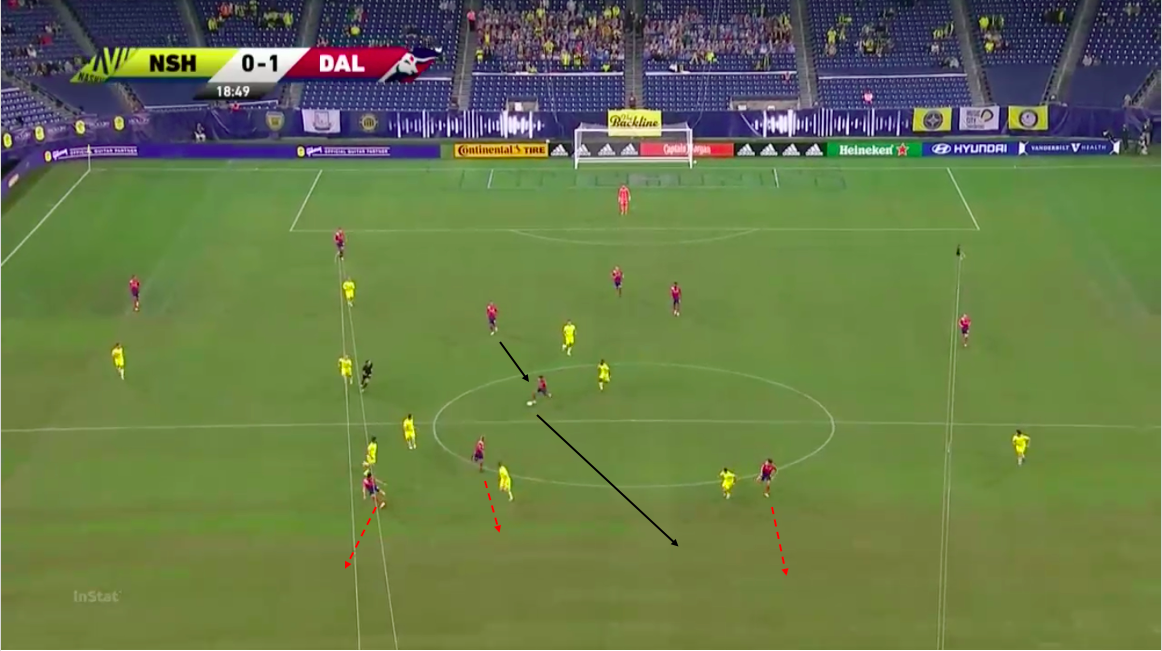 This tactic spreads the defence out even more, and Ferreira opts for an aerial pass to Hollingshead. This turned the 3v3 into a 1v1, which the left winger is able to finish.

Tactically the home side looked to attack Dallas with a verticality similar to Bundesliga‘s Red Bull Leipzig. By using Zimmerman and the other centre backs as the starting point in their attacks, Nashville was able to find passes between the lines. Looking at the analysis of their most frequent passing combinations, we can see how many passes came from Zimmerman. 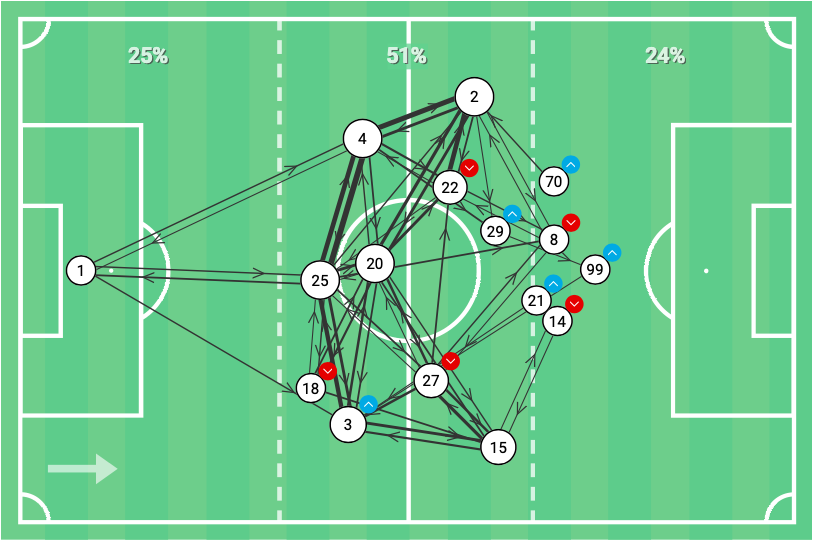 We can also see that Ríos was used as a target forward, while Leal operated as a second striker underneath. An example of their centre backs in the attacking phase can be seen in the sequence below. After initially moving the ball forwards, Romney is able to dribble into the space created. 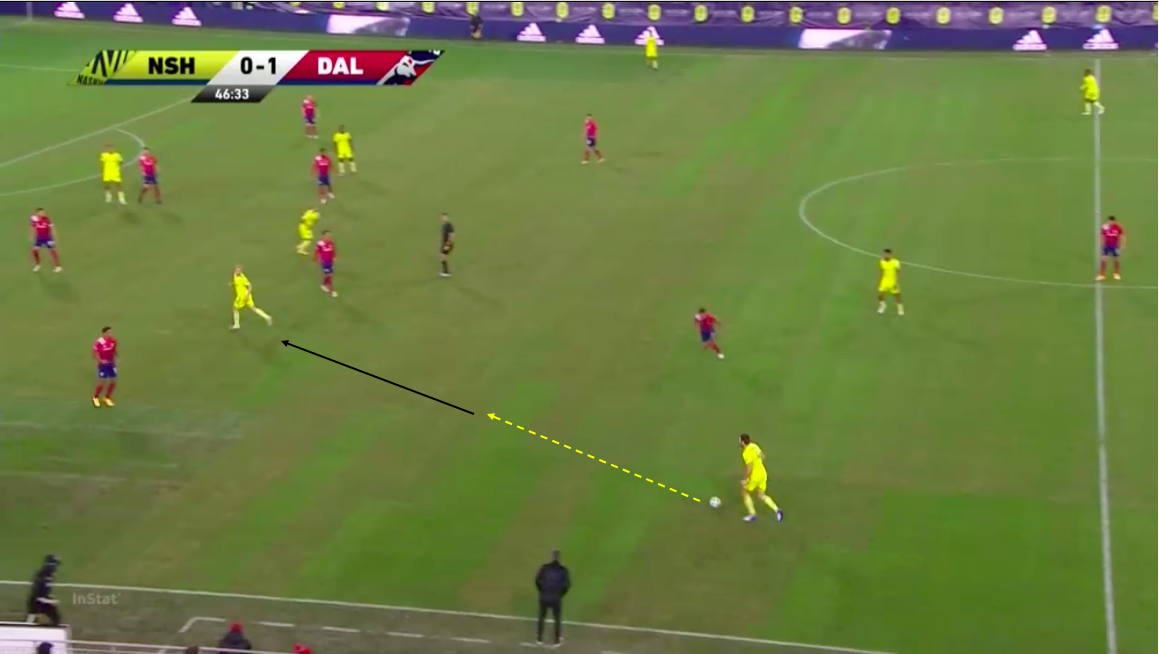 After taking the space, he is able to pass to LaGrassa. By taking the space towards the centre of the field and passing to his midfield teammate, Romney’s actions have pulled the defenders centrally. 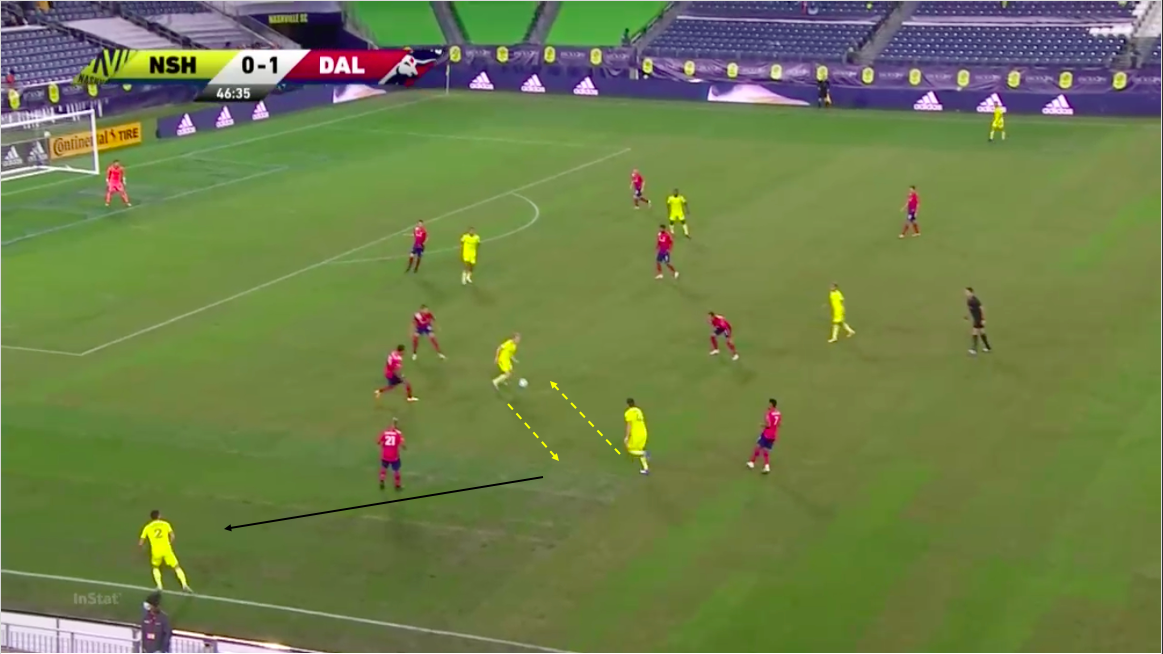 Naturally, this opens up the space for Lovitz, who attempts a cross after dribbling towards the end line. This tactic was used more frequently in the second half as Dallas sat back, allowing Nashville to serve more crosses. Below we can see the difference in attempted crosses in each half for the Music City team.

As stated above, Dallas was able to change its formation throughout the match. Using the five natural defenders that began the match, FC Dallas were able to naturally match Nashville’s wing-backs. The biggest change was defending with a front two.

The defensive tactic with two forwards is to coordinate with one another and force play to one side. Once it is on a side, the two forwards aim to cut off any passes that could potentially switch the point of attack. Analyzing this example from the second half, we can see how Barrios and Pepi made play predictable. 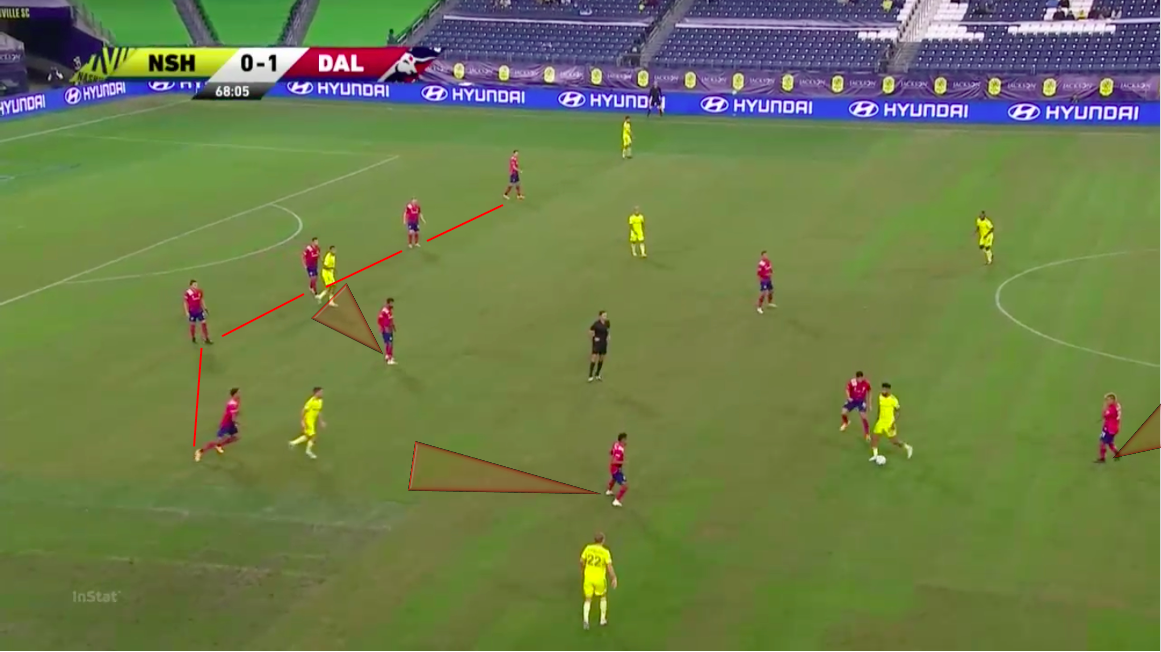 We can easily see the back five, with Reynolds tracking the Nashville player checking for the ball. Santos is using his cover shadow to screen any passes into the centre forward. Ferreira cuts off a passing lane using his cover shadow and is ready to step in case the pass goes wide. Up top we see Barrios discouraging any type of pass backwards, while Pepi, who is off-camera, has done the same.

This was a statement win for Luchi Gonzalez and FC Dallas. Winning on the road against a Nashville team that has ground out results bodes well for the North Texas club. Their tactical wrinkle with Hollingshead was able to make the difference.

Although they were not able to close out their first season in the league with an unbeaten home record, Nashville has shown they are capable of competing with the top dogs in the league. Having solid veterans such as Zimmerman and McCarty have been beneficial for Gary Smith. Nashville SC could potentially be a dark horse in the Eastern Conference playoffs.