Matchday 3 of the UEFA Champions League featured RB Leipzig receiving Paris Saint-Germain. Seventy-eight days have passed since last season Champions League semi-final between these two clubs, in that case with Paris Saint-Germain victory. PSG started the game dominating with a possibility to be two goals ahead if it wasn’t for Ángel Di María’s missing the penalty. RB Leipzig reacted on time and came back with some interesting tactical shifts.

This tactical analysis will analyze how PSG dominated the game’s start and used its counter-attacks to exploit RB Leipzig’s attacking-minded shape. This analysis will also cover Julian Nagelsmann’s shifts in their tactics to change the game. Finally, we will delve into this German team tactics when attacking. 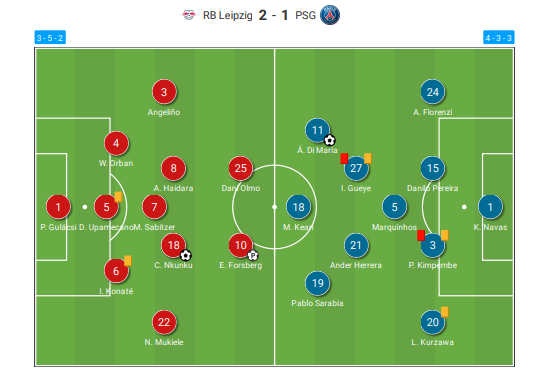 Nagelsmann deployed his most preferred 3-4-3 formation. With still some players not available due to injuries, he started Péter Gulácsi as the goalkeeper. The back three were formed by Willi Orbán, Dayot Upamecano, and Ibrahima Konaté. Angeliño and Nordi Mukiele played as wingbacks. Marcel Sabitzer paired Amadou Haidara as holding midfielders, with Dani Olmo and Emil Forsberg playing upfront.

The same problem faced Thomas Tuchel with injuries, not able to count with Neymar and Kylian Mbappé. He deployed his favored 4-3-3 system, starting Kaylor Navas as the goalkeeper. Alessandro Florenzi, Danilo Pereira, Presnel Kimpembe, and Layvin Kurzawa formed the back-four. Marquinhos played centrally, joined by Idrissa Gueye and Ander Herrera at the midfield. Upfront, Ángel Di María, and Pablo Sarabia played on the wings, with Moise Kean as the central attacker.

PSG dominance in the First Half

PSG started the game in their front foot, pressing high and forcing mistakes in RB Leipzig build-up.  The German team positioned themselves in a 3-4-3 when building up at the start of the game. The strong side wing-back dropped deep to give support to the centre-halves. PSG pressed in a 2-3 shape, man-marking the double pivot and centre-backs, creating a 5v5 scenario. When RB Leipzig played the ball wide to the wingbacks, PSG full-backs were in charge of stepping up to press, as depicted in the following picture. This tactic applied by Tuchel worked effectively in the first part of the game. Kane recovered the ball from a high press from a slopy action from Upamecano, feeding Di María for the game’s first goal. 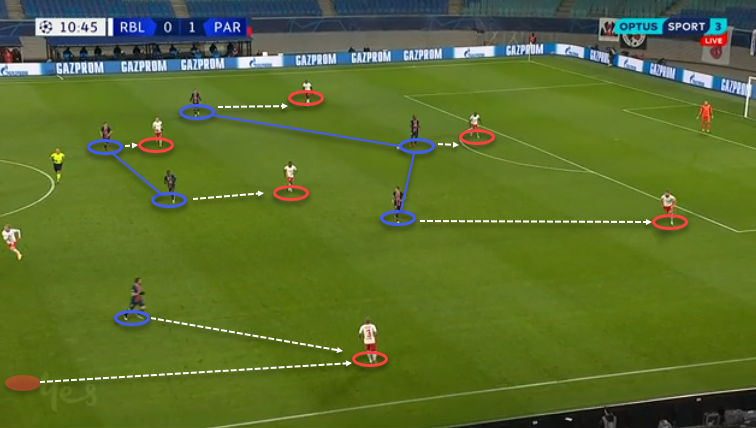 We will discuss later RB Leipzig’s tactical approach when attacking, involving both wing-backs. Albeit, this attacking style invited PSG to counter-attack, exploiting the spaces left at the back. Tuchel must have read this in anticipation as we saw as soon as PSG recovered the ball, they intended to find the front three with direct long balls. They found some success in this tactic, with Kane being instrumental. In the next picture, we can see a long ball played to Kane, who kept the ball and assisted the Argentinian creating a scoring chance for the Parisian team. 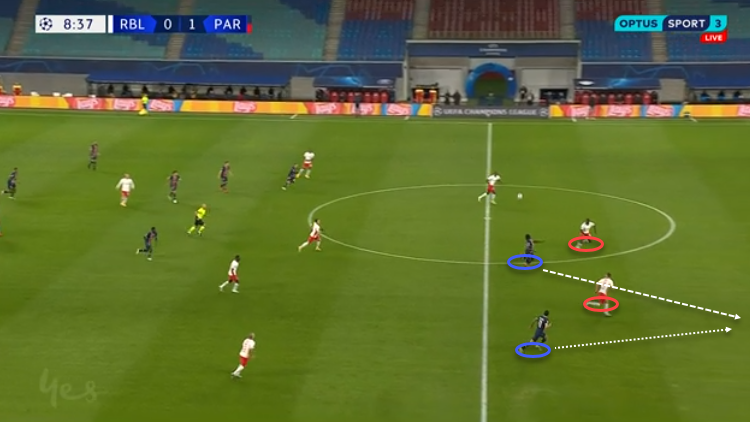 The German team rest-defence was, most of the time, poorly positioned. Kane, placed in the blind side of Upamecano, collected a ball from a counter-attack and created the penalty after shooting inside the box, later missed by the Argentinian. The problems continued through all the first half with Kane and Di María finding some chances from this phase. The next picture shows an action in which Di María’s goal was not conceded due to off-side. Kane dropped deep to recover the ball tracked by Upamecano, leaving the rest-defence in a 2v2 scenario. We can see the backline’s wrong positioning, the left centre-half giving space to the Argentinian, who was just off-side when parted the pass. 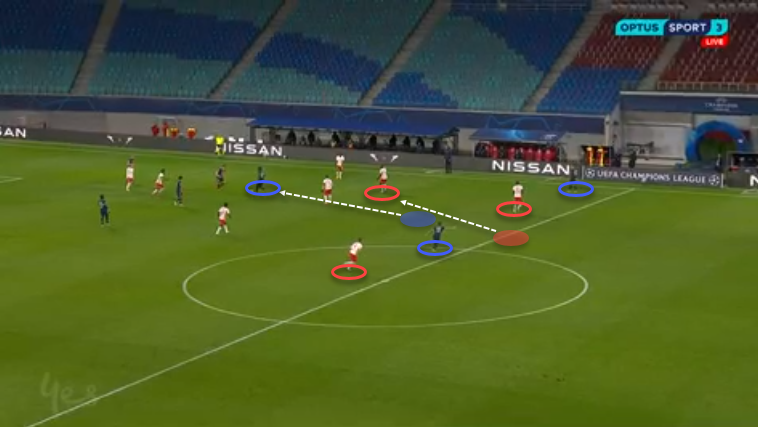 Another fact that gave dominance to PSG was Nangelsman tactics when pressing. RB Leipzig used their wingbacks to press PSG Fullbacks, creating a big gap between the midfield and defence lines. PSG took advantage of this and gave both wingers Di María and Sarabia freedom to exploit the space created. In the next shot, we can see a play where the Argentinian dropped deep, committing his mark to follow. Sarabia, with freedom, collected a ball in behind the lines in the right flank with no marks. Kane’s positioning was instrumental in pinning the other two centre-backs to leave Sarabia unmarked. 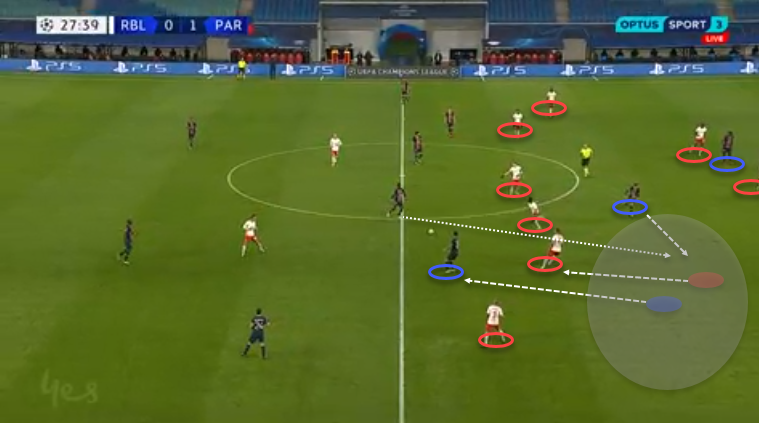 We mention before that PSG was the best side in the first half due to Tuchel bringing on different strategies to exploit RB Leipzig tactical weaknesses. Nagelsmann’s team shifted throughout the game their tactics to counter PSG dominance, with success. The French squad used their back four and Gueye positioned next to Marquinhos to create a double pivot in their build-up. The Germans pressed in a 3-2 shape, with Nkunku withdrawing and leaving Olmo and Forsberg in the press’s front line. In the next picture, we can see that the wingbacks were pressing PSG full-backs while the second line of the press kept a central positioning cutting off the central lanes. 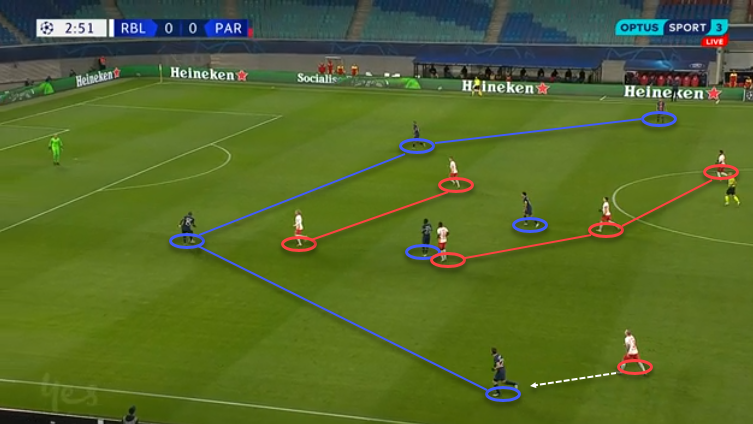 PSG shifted the ball and progressed the ball with ease under this press as the wingbacks arrived late to press on the weak-side. Moreover, with the wingbacks pressing, it left the back three in numerical inferiority. As we mentioned before, PSG winger played with freedom, and as shown in the next picture, they collected the ball behind the midfield line with Sarabia a Di María creating a 2v1 against the right centre-back. By effectively shifting the ball or using progressive passes, PSG managed to skip the lines and progress the ball. 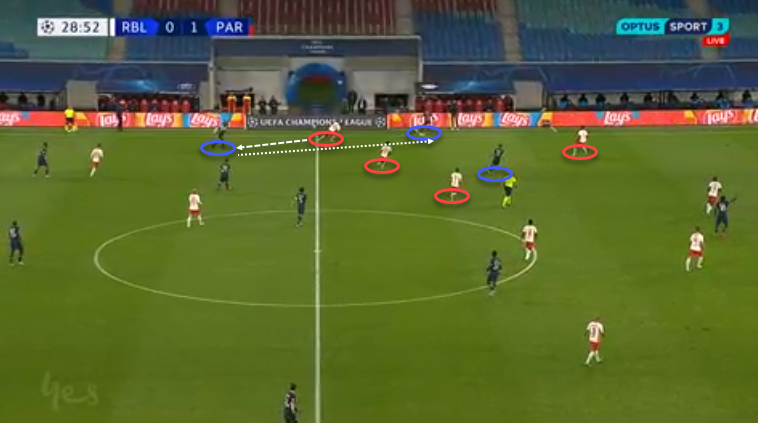 For the second half, Nangelsman shifted their pressing tactics into a 3-4-3 with a more aggressive style. Nkunku stayed higher, creating a 2-3 press, with now the wide forwards pressing PSG full-backs as depicted in the following picture. This press reduced the way the French team played from the back, making their build-up more uncomfortable. Secondly, the press structure was more stable with the wing-backs staying deeper, marking PSG wingers supporting the back-three. 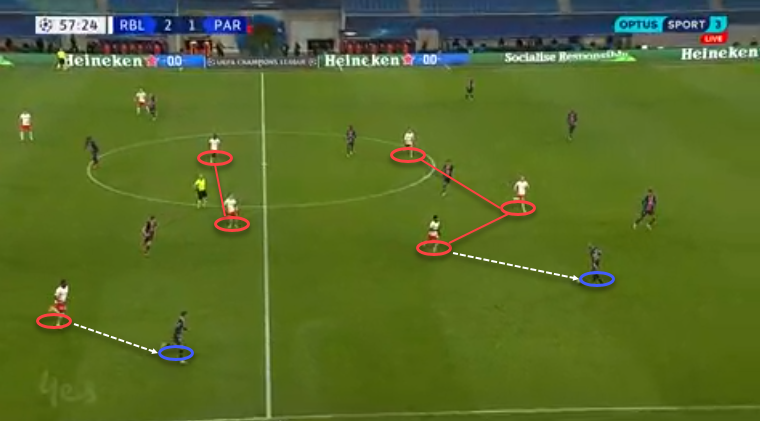 The other shift we saw in the game was on RB Leipzig’s build-up. The first section showed that PSG press high in a man-mark situation, with PSG full-backs pressing RB Leipzig wingbacks. RB Leipzig solved this threat in the first half with Angeliño staying higher, creating a front four. This front four pinned the back four of PSG with Marquinhos giving support. Haidara took a left wide position, vacated by Angeliño, creating a back four or five depending on Upamecano’s position. Under this shape, either flank was free, as shown in the next picture. This shift in their build-up gave the German team much more ball possession at the end of the second half. 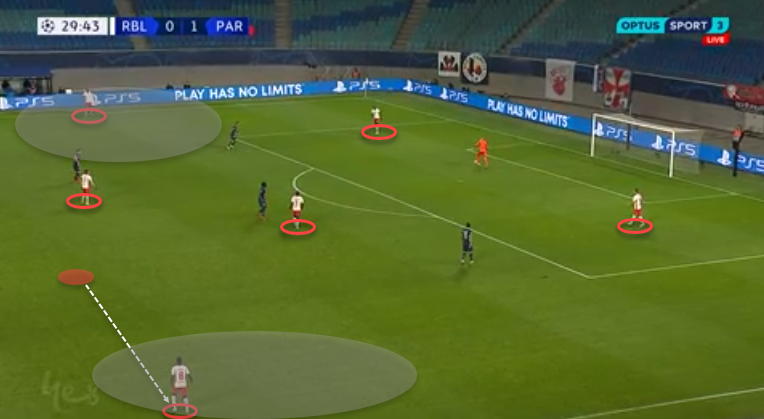 The German team under Nagelsmann has shown a powerful attack involving many players to break the rival’s defensive structure. This game was not an exception, and their offensive shape outnumbered the PSG backline. We mentioned before that Angeliño in the left flank took a higher positioning creating a front four. This shape is shown in the next picture with Olmo and Forsberg in the central channel while Nkunku and Angeliño occupied the half-spaces. With Nkunku and Forsberg staying goal-side of the full-backs, they pinned the centre-backs, giving Olmo space to drop deep and collect the balls behind the lines. 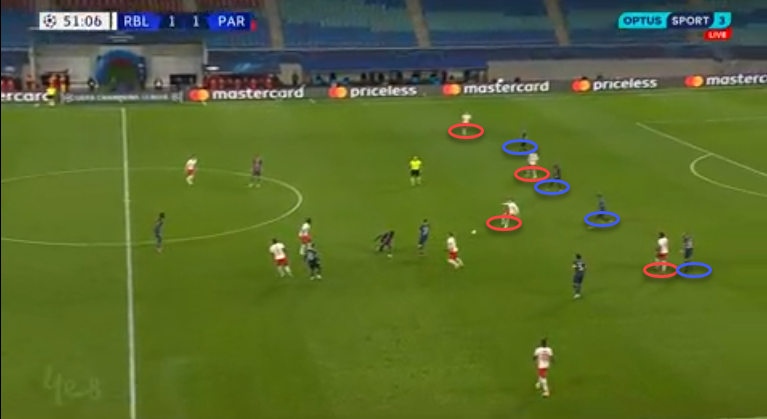 For moments, even when winning, RB Leipzig involved both wingbacks simultaneously, creating a front five as shown in the next picture, forming a 3-2-5. If PSG midfielders did not follow, the German team outnumber PSG defensive line, creating a numerical superiority. Even though this becomes a threat to any rival, it also has its consequences. The rest-defence must work correctly to avoid counter-attacks, which did not work correctly in the first half with PSG counter-attacking with ease, as we showed before. 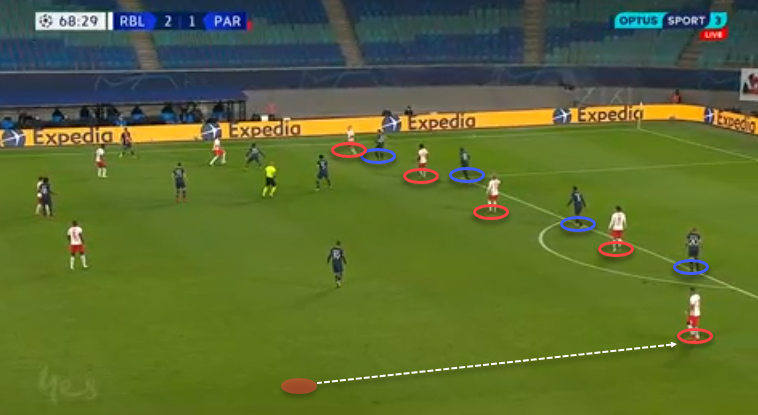 This was a crucial game, with the hosts earning the 3 points positioning them above the French team. Manchester United loss gave some relief to PSG, staying just 3 points away from both direct rivals. What started as a promising day for Tuchel with some effective tactics ended poorly with no points and two players suspended.

RB Leipzig suffered the first part of the game, and Di María missed penalty gave them the chance to stayed in-game. Nagelsmann’s shift of tactics was significant and changed this game, giving them a second-half with complete superiority. Still, they should improve their rest-defence if they want to repeat last season semi-finals.