It’s fair to say Reading have defied all expectations with their start to the EFL Championship season. The Royals picked up 22 points from their first eight matches this term, which saw them get off to a better start than they did in the 2005/06 campaign when they won the title with a record 106 points. But after losing 3-2 against struggling Coventry on Friday night, the Royals conceded three goals for a second consecutive game: this time without reply as they lost 3-0 to Preston North End.

Preston’s form has been utterly bizarre. They’ve lost every single game they’ve played at home, but have picked up 13 points from a possible 15 on the road. After an uneventful first period, North End won a penalty just a few minutes into the second period. But Daniel Johnson had his spot-kick saved by Rafael Cabral. After that, the Lilywhites soon got over that disappointment when Scott Sinclair opened the scoring after 64 minutes. Emil Riis made it two just four minutes later, and Brad Potts added extra gloss to the scoreline in extra time.

This tactical analysis will delve into the tactics used by Veljko Paunovic and Alex Neil. 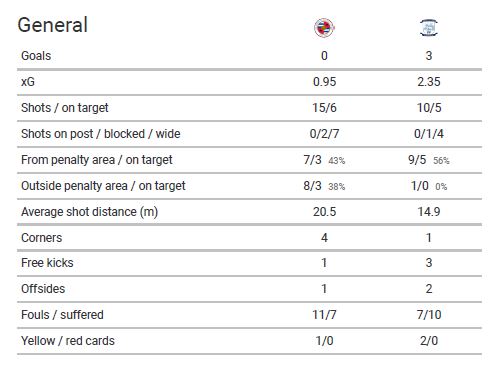 Reading stuck with their usual 4-2-3-1 system which has brought them plenty of success. Rafael Cabral started in goal, with Tomás Esteves, Michael Morrison, Tom McIntyre and Omar Richards at the back. Andy Rinomhota and Josh Laurent started as the double pivot, with Alfa Semedo just in front of them. Michael Olise played on the right side, with former Rangers man Sone Aluko on the other flank. Portuguese striker Lucas Joao led the line. 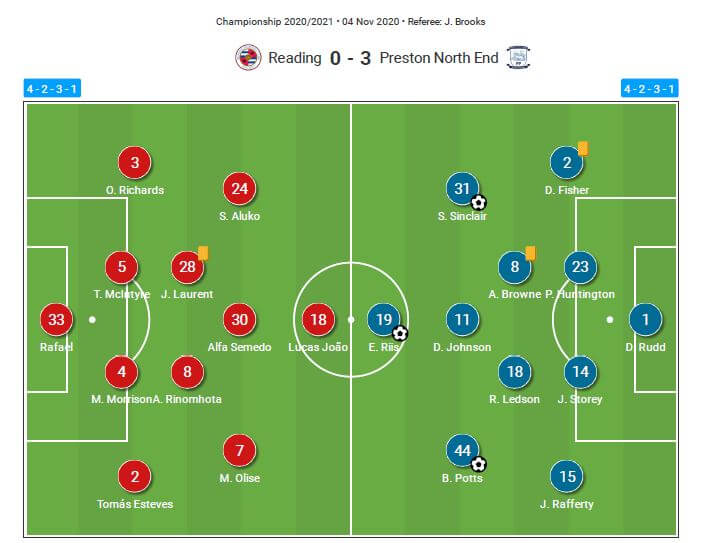 Alex Neil also opted for his tried and tested 4-2-3-1 formation. Declan Rudd was between the sticks, behind a back four of Darnell Fisher, Paul Huntington, Jordan Storey and Joe Rafferty. Former Everton man Ryan Ledson partnered the versatile Alan Browne in central midfield, with Daniel Johnson playing ahead of them. Lone striker Emil Riis was supported by wingers Scott Sinclair and Brad Potts.

Reading and Preston cancelled each other out in the first half

The first period was pretty uneventful, with chances at a premium for both sides. With both teams playing the same formation, they found it very hard to play through each other and create numerical superiority in areas and situations on the pitch.

Preston’s gameplan was to press the Royals high up relentlessly in the first half, which forced them to play more long balls than they’d usually like to. 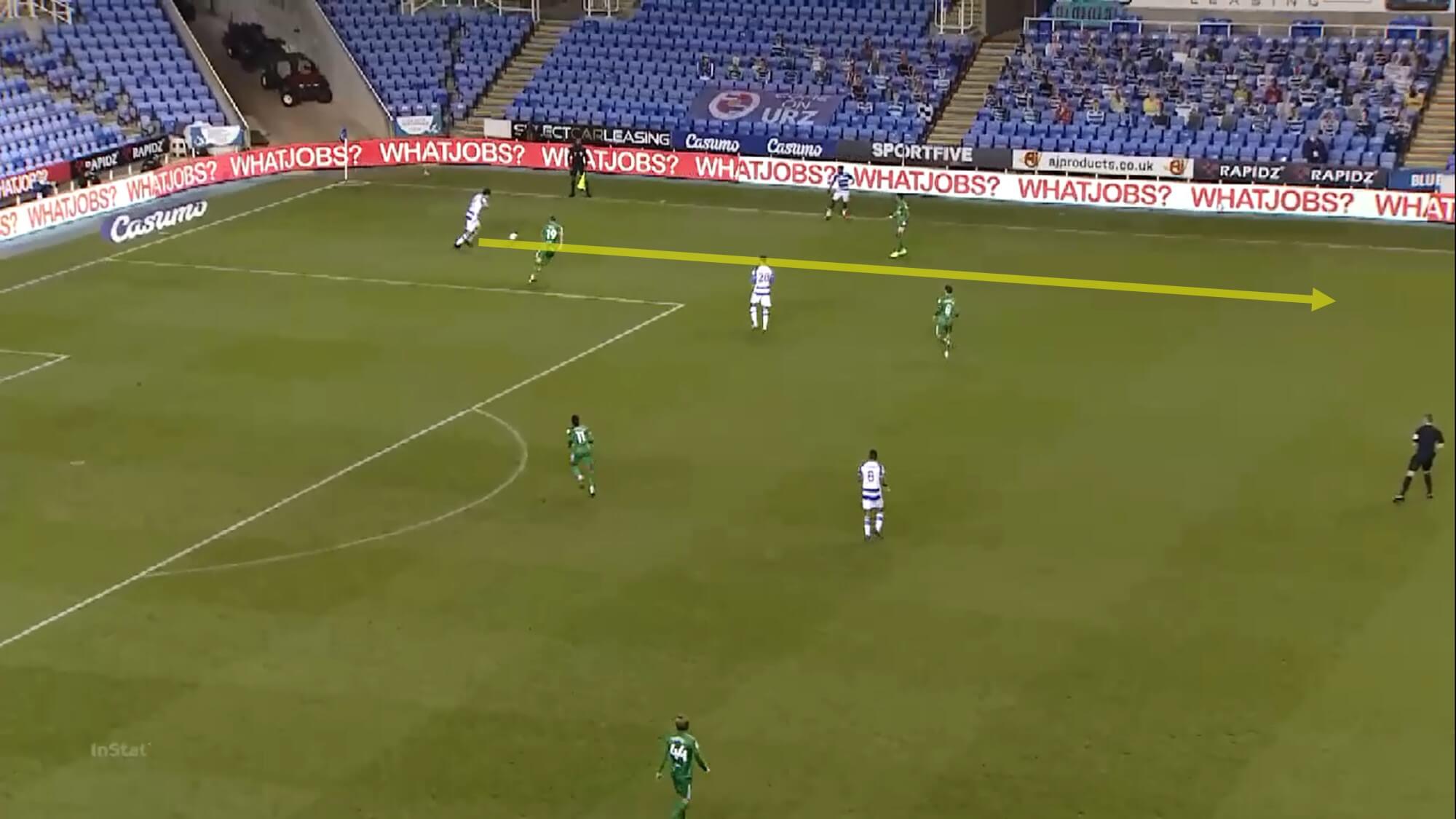 Due to North End’s effective pressing, Reading found it difficult to progress the ball through the thirds. However, when Preston turned possession over, it was difficult for them to break quickly. As Reading weren’t able to progress the ball successfully, they didn’t manage to commit many men forward. So the away side would often pick up the ball in deeper areas, with most of the Reading players behind the ball. In these situations, the Lilywhites struggled to break down a team who usually maintain a solid defensive structure.

Although there weren’t too many chances in the first half, Reading had the better of them and they managed to force Declan Rudd into a few saves. Their best moments came when they managed to beat the press by playing over it. In the image below, Reading have been forced to play a long ball up to Alfa Semedo. 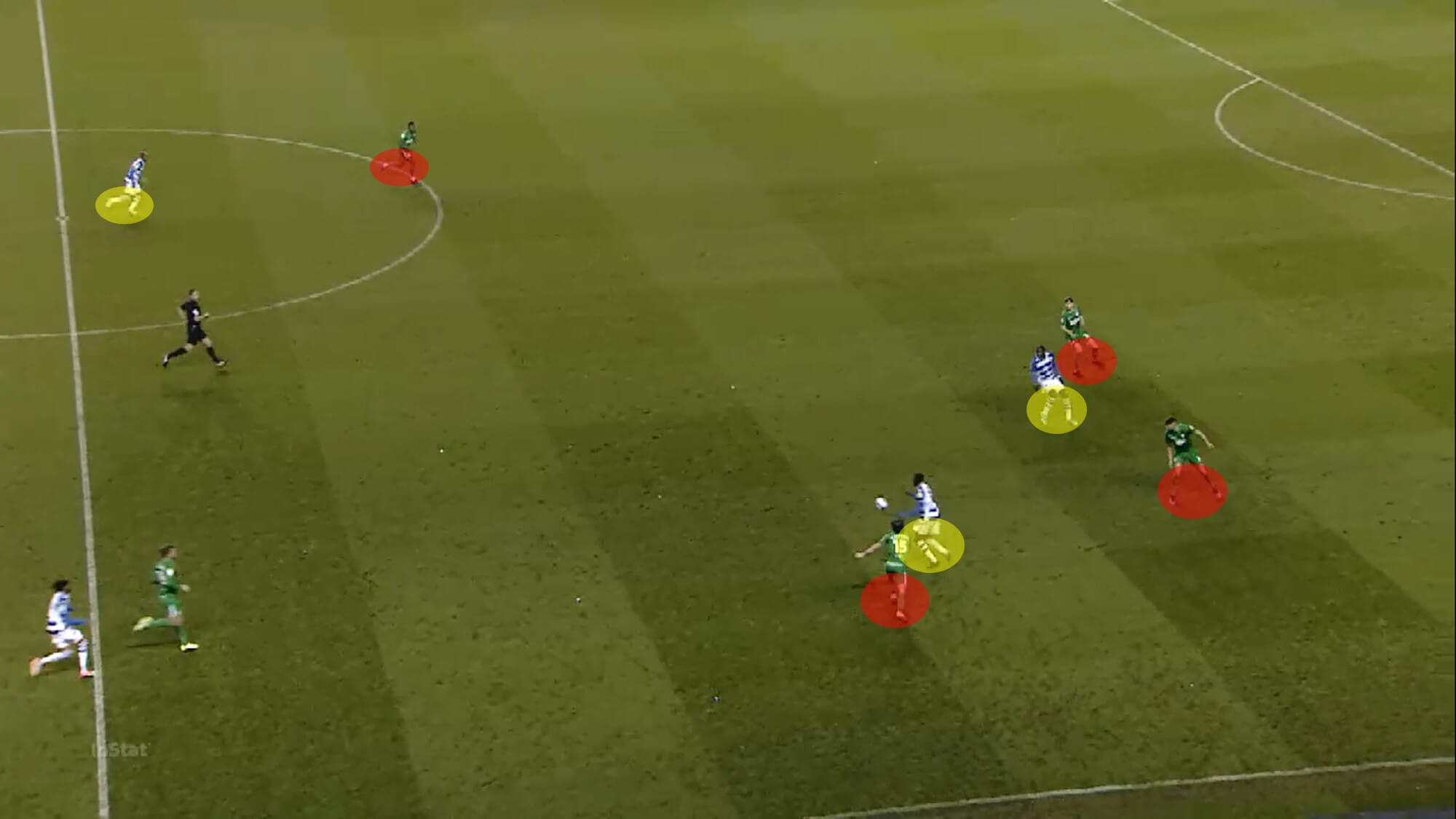 After winning the duel, Reading have three attackers running at four Preston defenders, without the protection of the midfield five who’ve all pushed up to join the press. From there the hosts switched the ball out wide, before delivering a cross to Lucas Joao who saw his header well saved by Rudd.

The stats behind two contrasting halves

Before we look at the second half, the analysis will just take a look at some of the stats behind the contrast between the halves. In the first period, Reading’s xG was 0.27 and Preston managed 0.26. But after the interval, Reading created 0.68 xG, whereas the Lilywhites’ xG was 2.1.

By using the PPDA metric, we can get a sense of how highly both teams pressed. PPDA is opponent passes per defensive action in opponent’s final 60% of the pitch. The lower the number, the more intense a team press.

A lot of this was down to game state. When Preston went ahead, they did sit deeper and they allowed Reading to come onto them. This played into their hands though, as they were able to play quick balls into Emil Riis in transitions.

In terms of possession, the away side edged it in the first half. But after the break, Reading had 74% of the ball. Preston won’t be worried about that though, as they were much more effective with the little possession they did have. 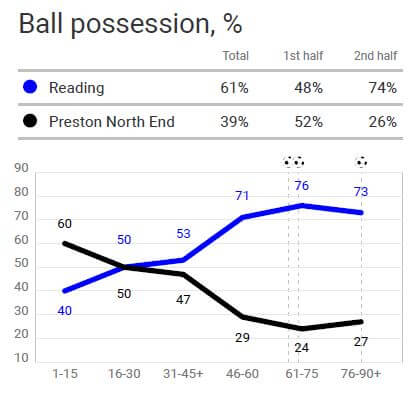 Although Preston didn’t press as high after the break, they did pick their moments to press high and when the score was still 0-0, they stepped onto Reading at goal kicks to try to stop them playing out of the back. When they did this, they changed their shape from a 4-2-3-1 to a 4-1-3-2. 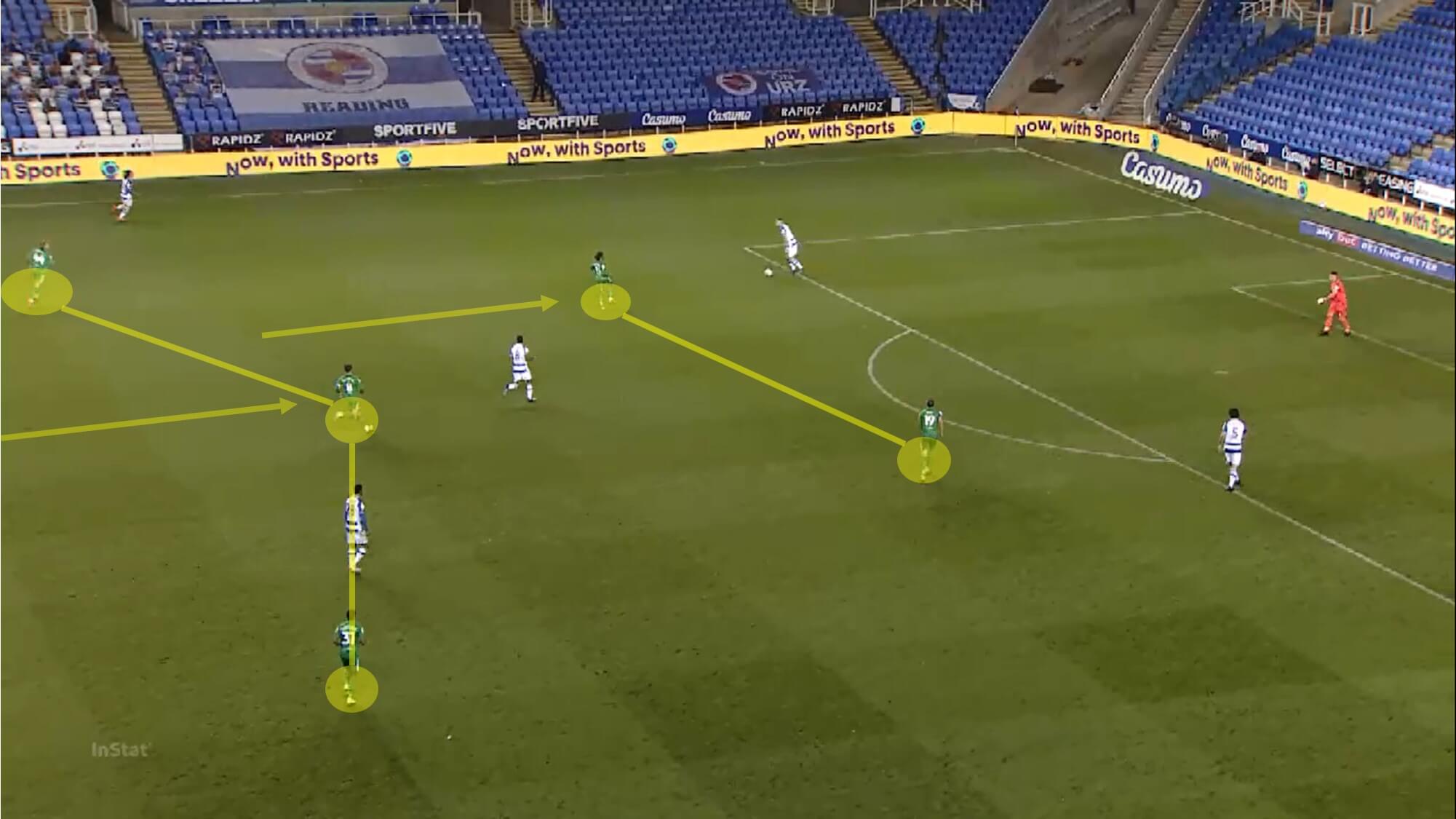 Attacking midfielder Daniel Johnson stepped up alongside Riis to join him in pressing the centre-backs. This was to ensure that Riis wasn’t up against two players on his own, as it would be easy to play around him and take him out of the game. Alan Browne would then step forward into the attacking midfield line of three to back up that first line of pressure from a central position, as there would have been a big gap in that area if Reading broke through that first line. Ryan Ledson would stay in a deeper position, keeping close attention to Royals’ attacking midfielder Alfa Semedo.

The big difference in the second half was that if Reading did break through that first defensive line, the Preston midfield would retreat and sit deeper. Instead of trying to win the ball back, their immediate priority was to mark Reading’s most attacking players closely, whilst making sure there weren’t big gaps left between the defence and midfield. 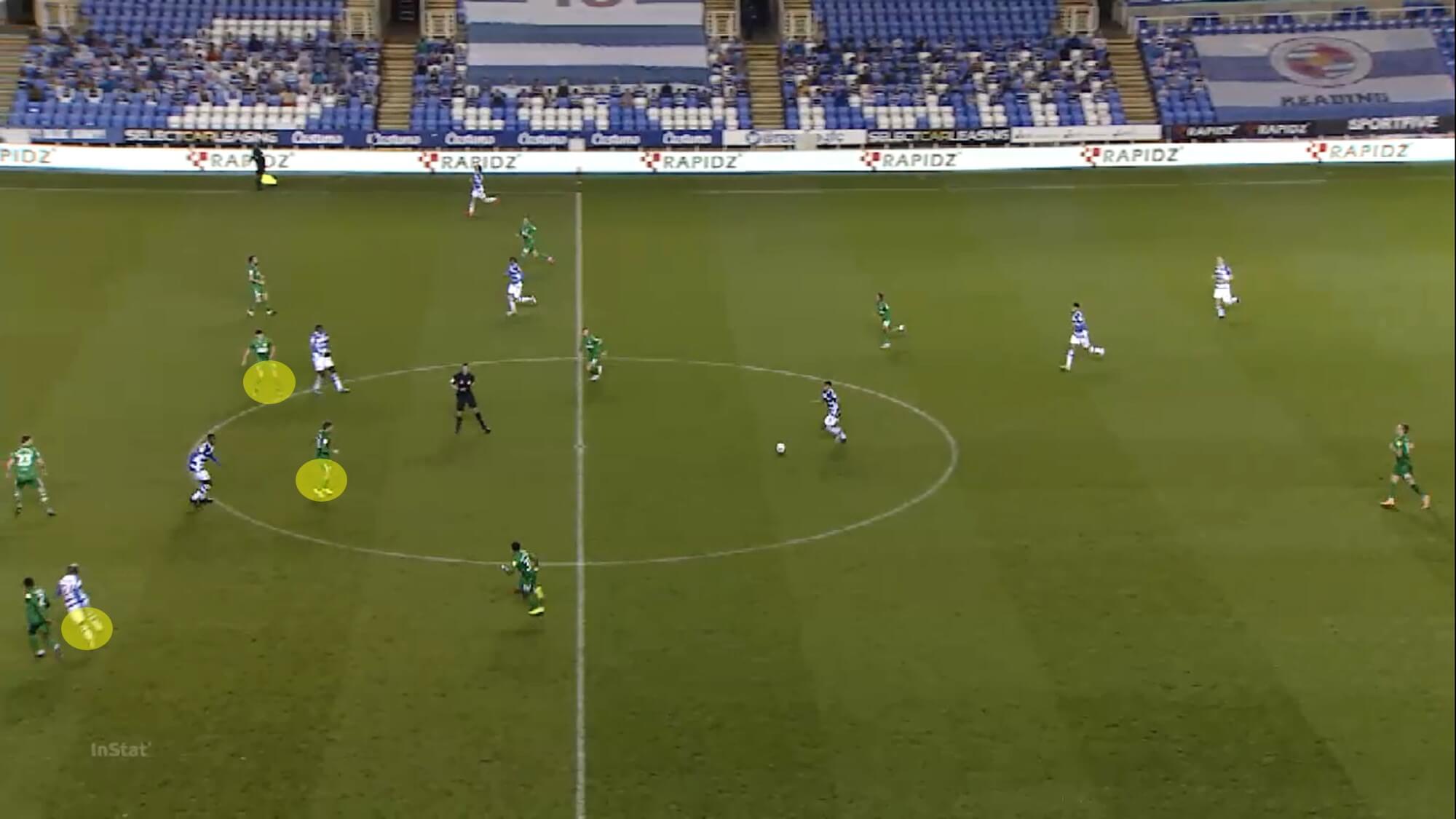 This also gave Reading time to commit more bodies forward. As you can see in the image we’ve used, right-back Esteves is looking to push forward from a wide position. The hope from there was that they’d be able to catch the Royals on the break, which they did very successfully.

Preston’s overwhelming defensive objective was to deny Reading space in central areas. One of the ways they did this was by keeping the backline incredibly narrow, as you can see in the image below. 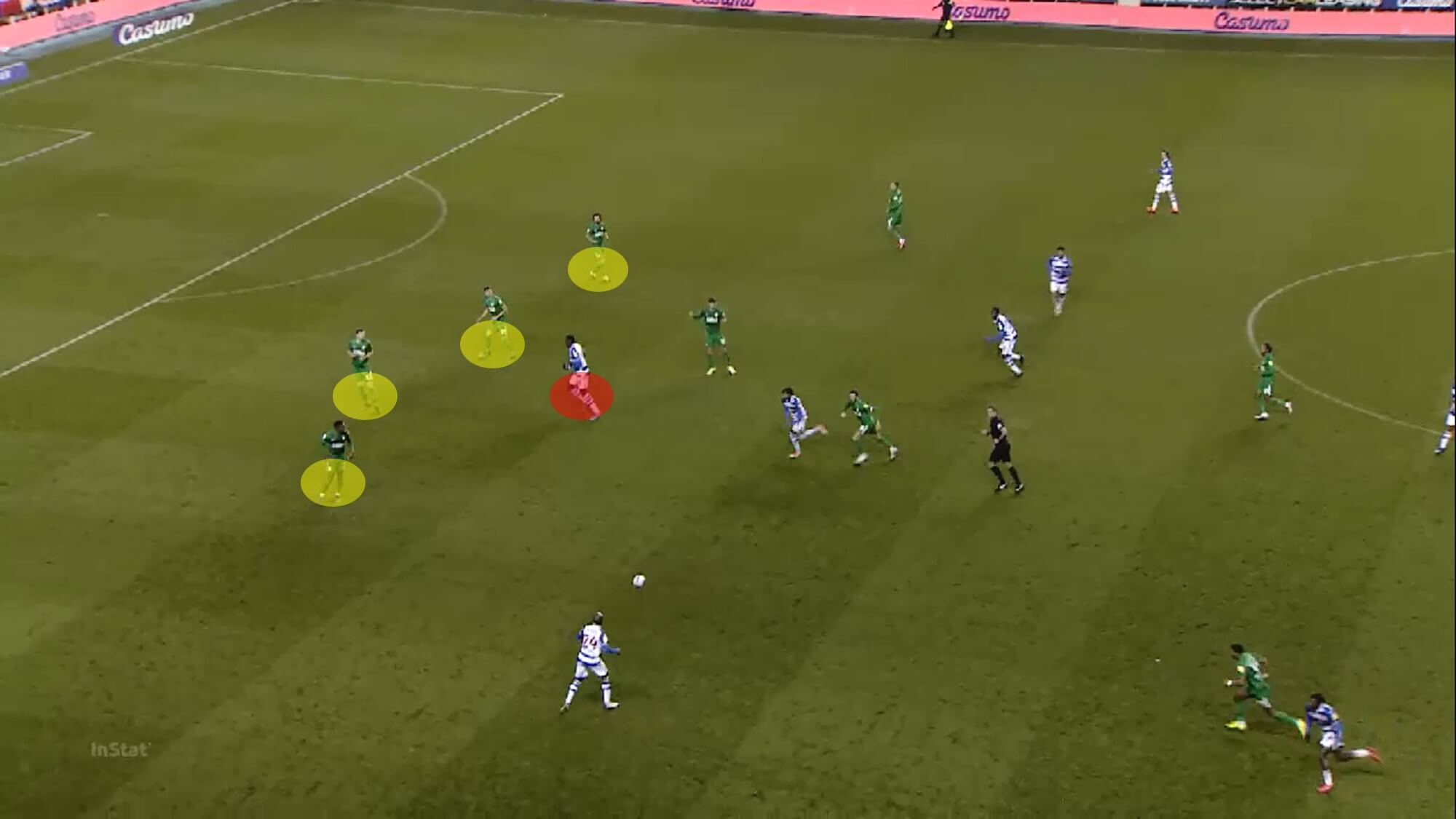 Their narrowness meant that top scorer Lucas Joao was surrounded by North End players almost every time he picked up the ball. This also meant Semedo didn’t have much space to operate in, and neither did right-winger Michael Olise as he often drifted into central areas. The Royals were also encouraged to commit their wing-backs forward to exploit the spaces left in those wide areas, which is another ploy Preston used to hit them on the break.

The image below gives us a snapshot into how Reading tried to attack, and how Preston crowded out their central players in the final third. 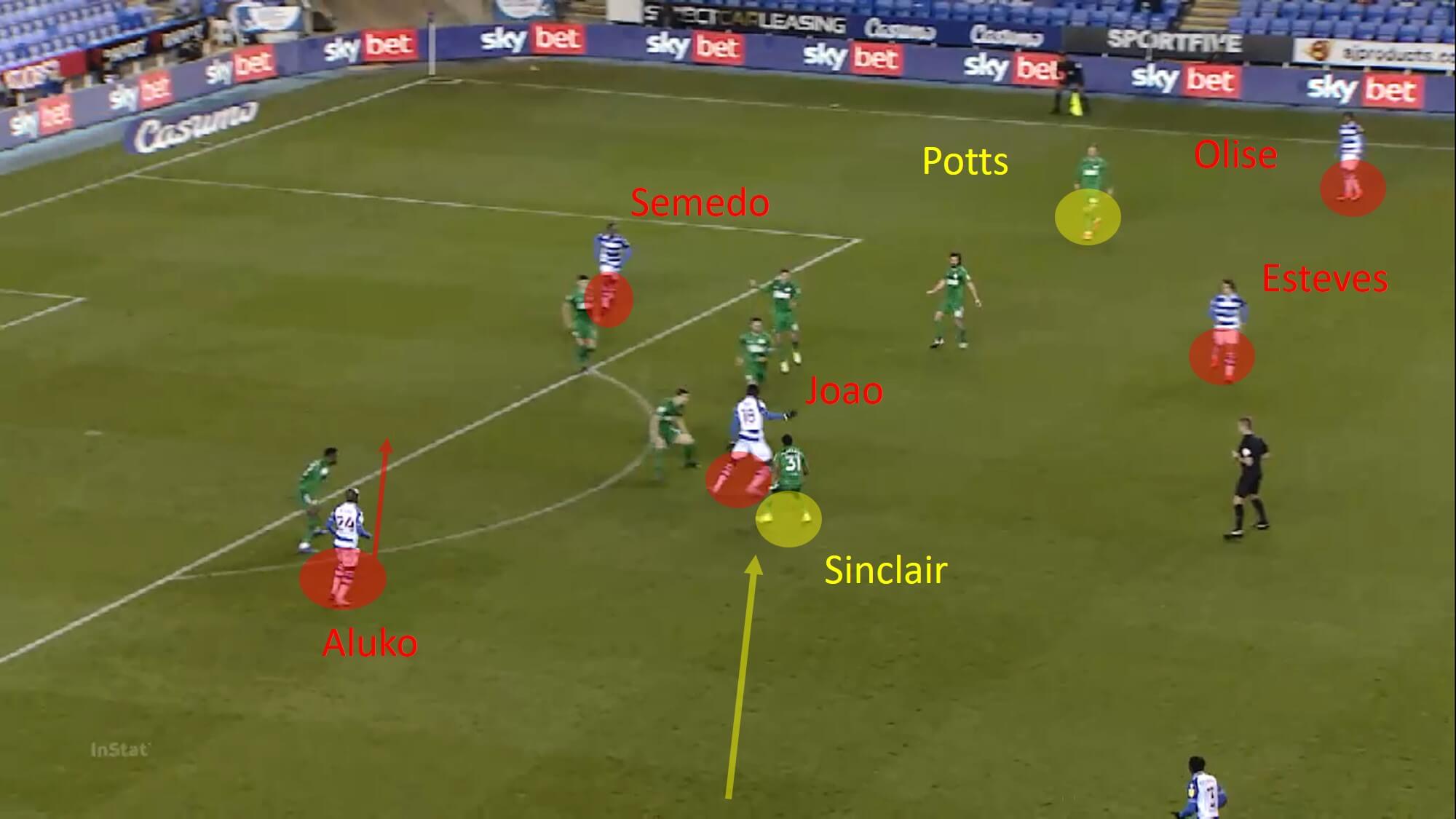 Lucas Joao drops off the last line to receive the ball to feet. This encourages the central defenders to push out slightly, leaving space for the likes of Semedo and Aluko to run in behind. In theory, this could have caused Preston plenty of problems, but Joao was never given time or space to find them with a pass. This is due to a combination of Preston’s narrow back four, the discipline of the two holding midfielders who constantly got back to protect their centre-halves, and Scott Sinclair who tracked back from a wide right position. Interestingly, Reading right-back Esteves has pushed into the right half-space, with Olise keeping his width on the outside right channel. To mitigate against this potential overload, left-winger Brad Potts worked hard to track back all evening.

Reading pushed on in the second half, as they searched for an opening goal and after conceding, searching for a route back into a game. But they certainly overcommitted at times and were caught on the counter frequently. In the image below, right-back Esteves has pushed forward into the number ten position. 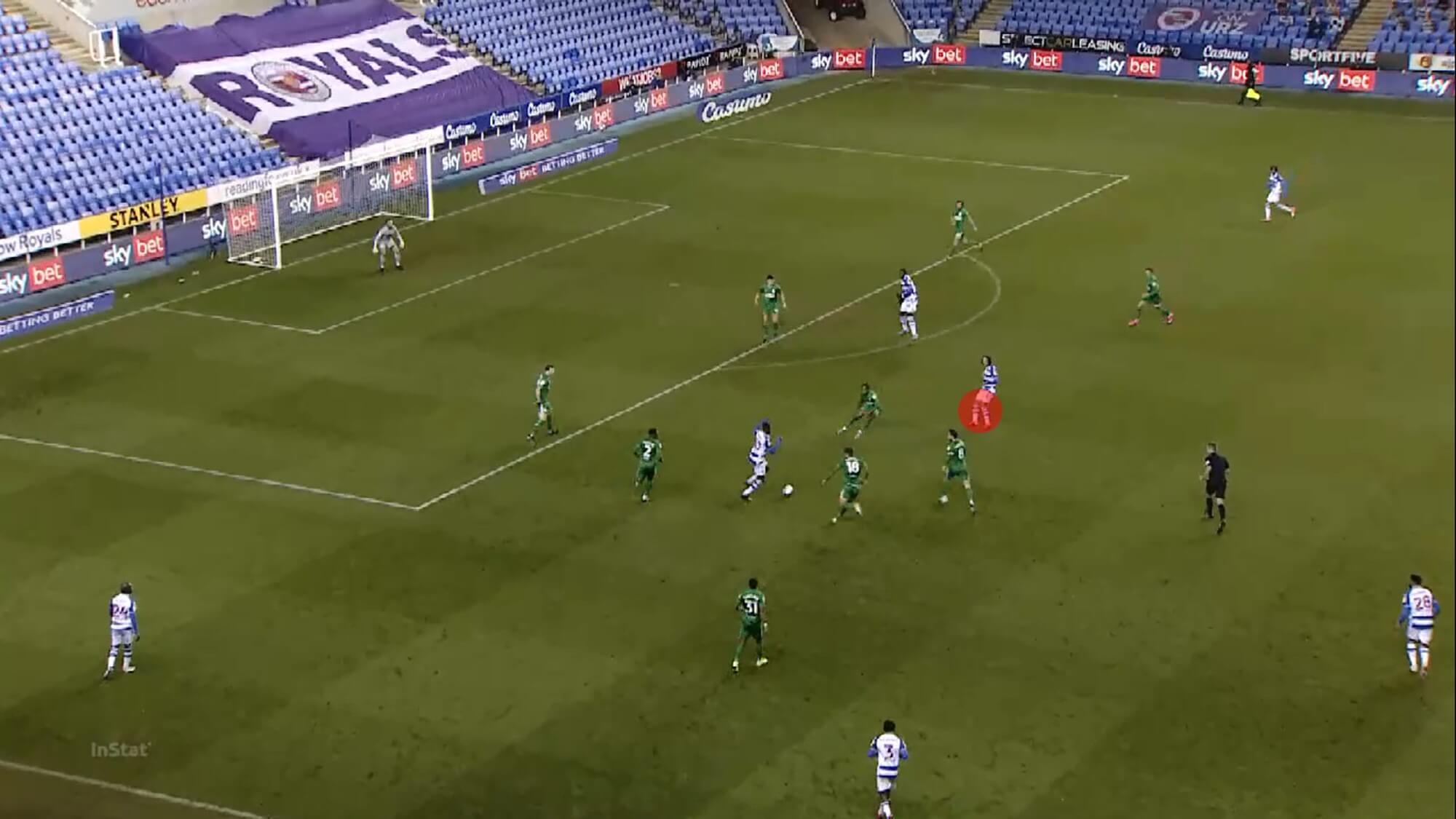 Preston win the ball back deep in their own half, before quickly getting the ball up to striker Riis in the right channel. The Dane raced through and was fouled to win a penalty, but take a look at the image below. If he wasn’t fouled, he could have easily played the ball across to Scott Sinclair. 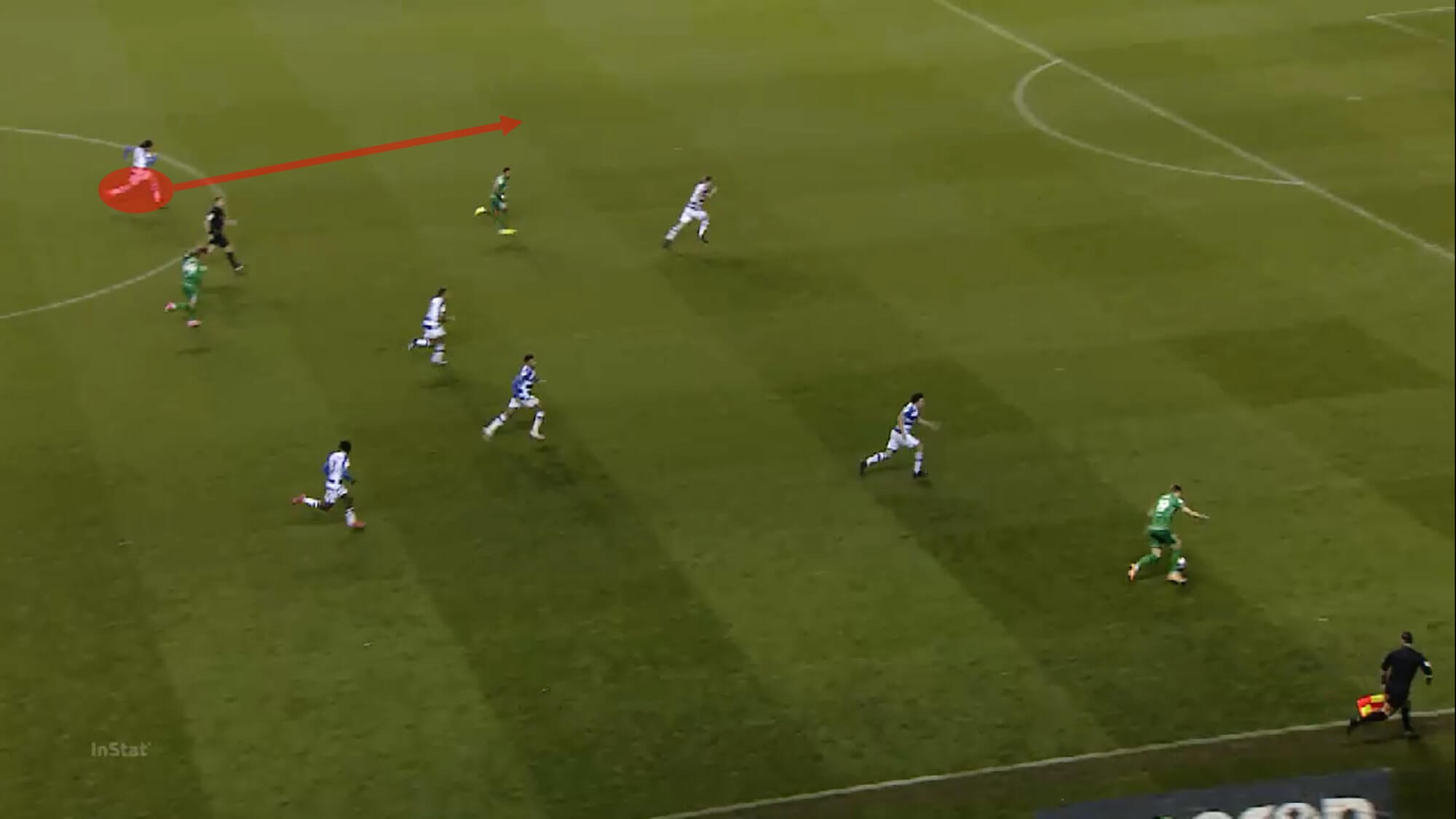 Esteves (circled) can’t get back quick enough. Not only had he ventured high up the pitch, but he’d also moved into a central position so he had even further to travel backwards.

It wasn’t just Esteves who got caught out of position. His opposite full-back Omar Richards was too far up the pitch when Preston won the ball back in their own half, and they moved the ball quickly to Scott Sinclair who could exploit that space on Preston’s right side. 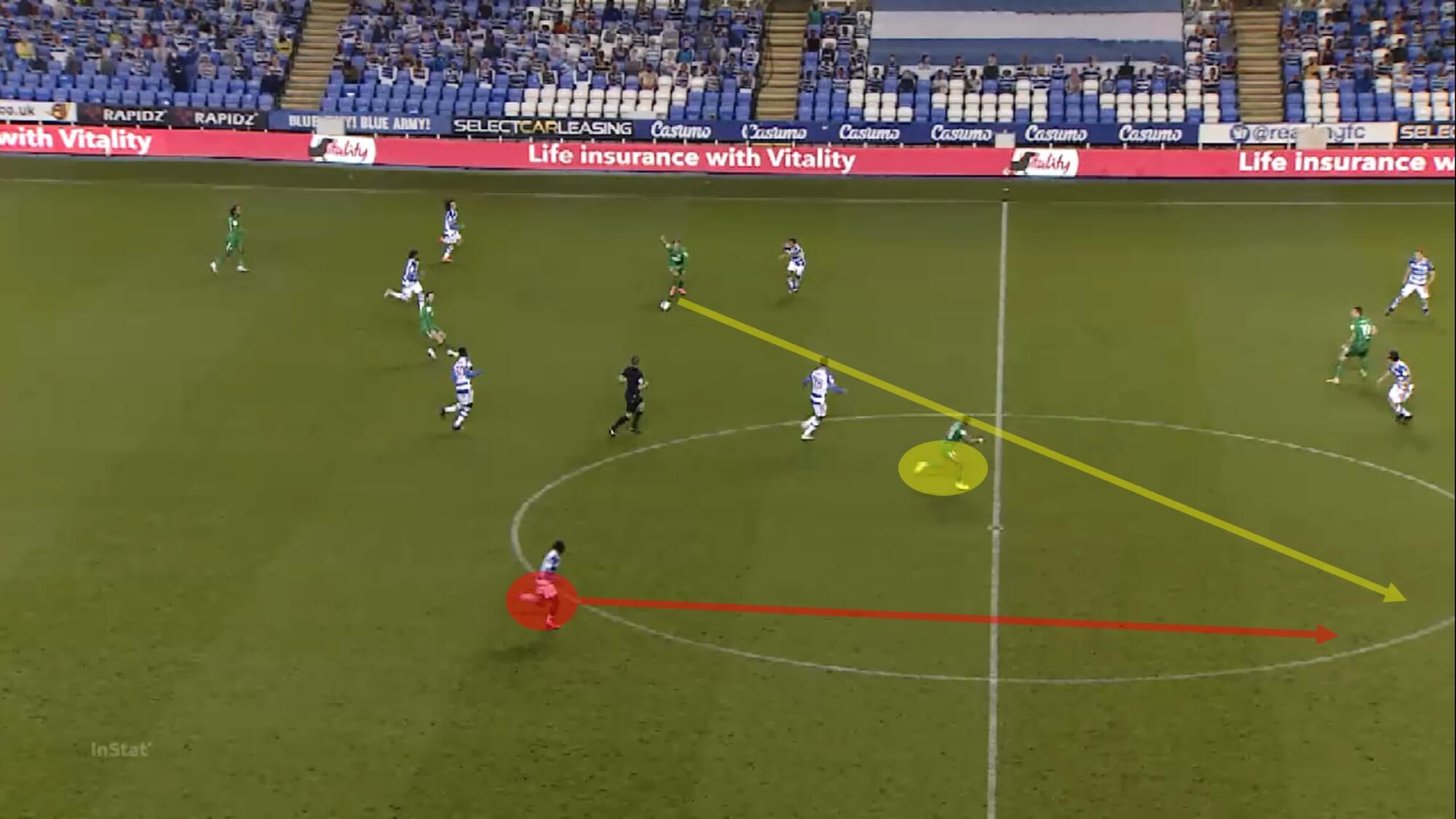 Emil Riis was pivotal to the way North End attacked. He played the target man role brilliantly, as he was the player that the Lilywhites looked to aim their direct balls up to, and he often held the ball up and brought others into play. When they went long to him, Preston managed to push midfielders up to support him. In the image below, Riis (circled in yellow) wins the aerial duel with three players (circled in blue) just behind him in support. 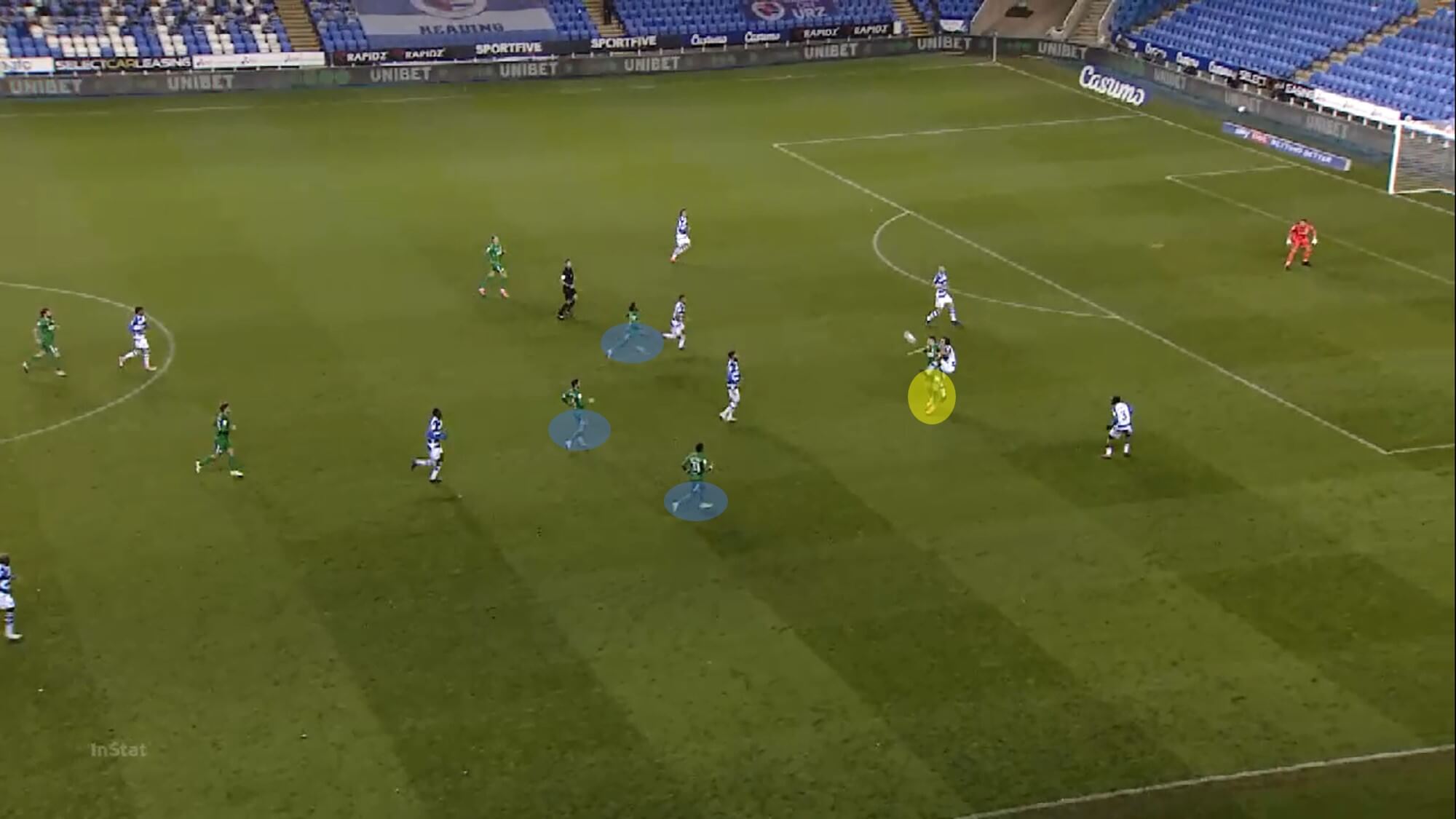 Although the second ball falls to a Reading midfielder, he was instantly under pressure due to the presence of the three advanced Preston midfielders. By pushing enough bodies up quickly to support Riis, Alex Neil’s side were able to either pick up the second ball or counter press quickly if a Royals player was to pick up the knockdown. This meant that Reading weren’t able to regain possession easily after Preston went more direct.

As well as being a focal point for attacks, Riis managed to cause problems by running in the channel (as we touched on earlier) and running in behind. The 22-year-old netted his first goal in English football by playing on the shoulder of Tom McIntyre. When Preston played a ball over the top into his path, Riis out strengthed and outpaced the Reading centre-back before running through on goal and scoring.

The margin of victory probably flattered a Preston team who delivered devastating sucker punches in transition, but that’s now four consecutive away wins. It sounds like there’s nothing flukey to their formula of winning on the road, they just need Deepdale to become the fortress that it always has been in recent years if they’re to finally break into a playoff spot.

As for Reading, the fact they’ve lost two consecutive matches but are still three points clear at the top of the table after ten games tells you everything you need to know about the start they’ve had to the season. It’s another small setback for a manager in Veljko Paunovic who up until recently, has had everything his own way during his short spell in English football. The Royals will be hoping to bounce back with a win at Stoke on Saturday.