One of the Saturday 3 pm Championship games was Neil Warnock’s Middlesbrough against high flying Reading. Middlesbrough have had a mixed start to the season with one win, two draws, and one loss, while Reading have enjoyed a perfect start with 12 points out of 12 under their new manager Veljko Paunović.

This tactical analysis will look at the tactics that decided the outcome of this Championship clash. Warnock’s defensive setup against an in-form team led to a cagey game and one where there was only one shot on target. Middlesbrough only had 37% of possession and kept Paunović’s men at arm’s length throughout to ensure that Reading’s 100% record would disappear. A breakdown of the possession stats over the course of the game can be seen in the graphic below. 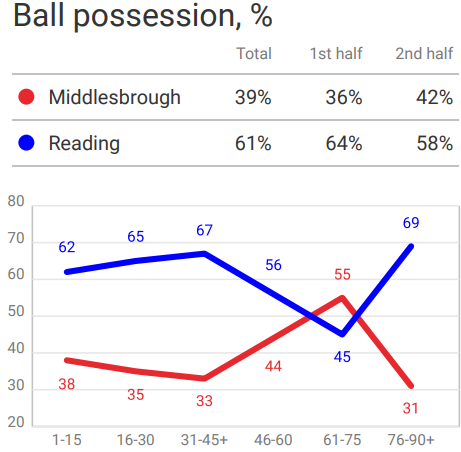 Before going into this analysis, it is important to look at the expected goals for this clash. Middlesbrough had an xG of 0.87 while Reading only had an xG 0.47 showing how chances were extremely limited in this game. Although it wasn’t a classic there were still some intriguing tactical battles and insights into the style of play of both teams.

Middlesbrough named an unchanged line-up in a 3-5-2 formation that gained them their first win of the season against Barnsley two weeks ago. The reliable three central defenders were Anfernee Dijksteel, Dael Fry, Paddy McNair with Marcus Tavernier, and Marc Bola flanking them as the wing-backs.

The three central midfielders in Warnock’s 3-5-2 line up in a triangular shape with Jonny Howson dropping deeper than the other two, which was a key part of the reason Middlesbrough were able to blunt Reading’s attacking players and will be explored later in this piece.

Reading lined up in their usual 4-2-3-1, which they have used in all five of their games this season. The role of Andy Rinohmota and Josh Laurent in front of the back four has been key to Reading’s impressive defensive record this season. Their ability to screen the back four and offer extra protection has not only provided security but also allowed the attacking players in front of them to flourish.

These players include the likes of former Liverpool player Ovie Ejaria and Lucas Joao who were both recalled to the starting line-up. They were the only two changes for Reading in a team that looks capable to challenge for a place in the Premier League. 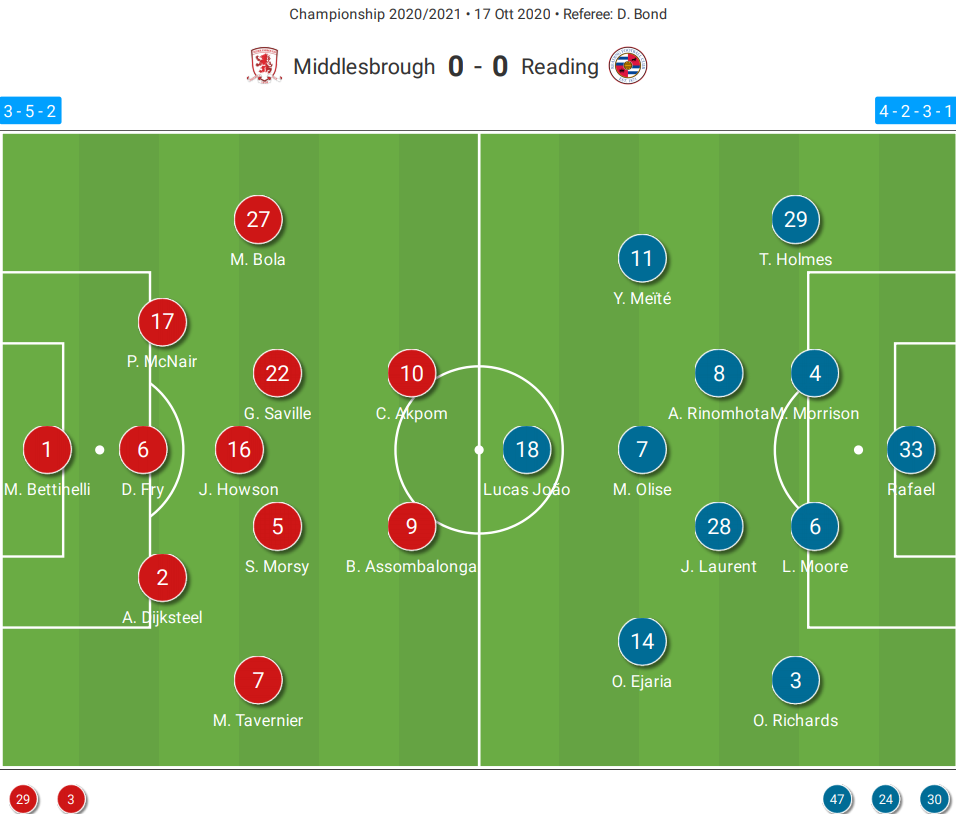 A quiet first half

The first half found chances hard to come by with Warnock’s men proving to be extremely solid defensively, as one would expect. However, the only shot on target in the entire game came from Michael Olise who was the most dangerous player on the pitch in the first half. Howson was relentless in his man-marking and pressing of the likes of Ejaria and Olise, yet, in this instance, Howson and his other two midfield partners allowed too much room in the half space for the intricate Olise to find. This is because of the lack of pressure on Rinohmota who has the ball and can be seen in the frame below. 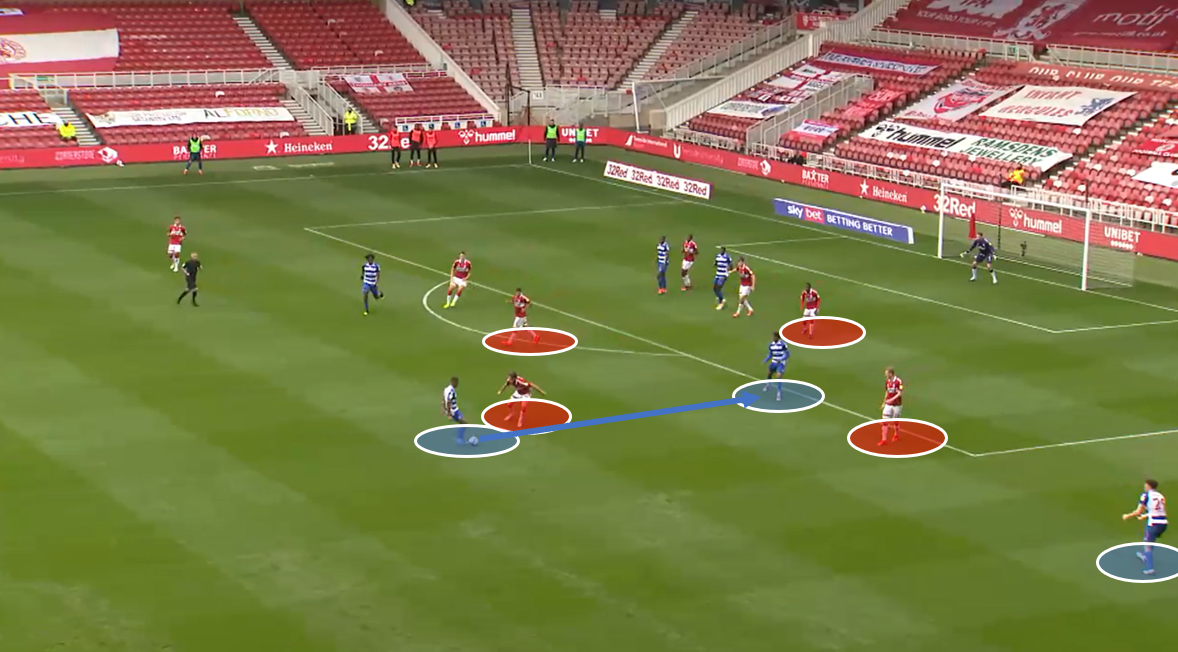 Ultimately, there are various issues which led to the creation of this chance and as discussed, the pressing of Howson is a key reason for the space that Olise can find himself. However, the positioning of Saville and Bola on the left-hand side of Middlesbrough’s defence was equally problematic. Bola was playing left-wing back and Saville played as the left central midfielder in this game. In this instance, Bola is far too narrow to his the centre-backs meaning Saville is caught in two minds as he is wary of the threat on the wing with Tom Holmes in a decent position but Olise was able to play in between Bola and Saville to create the necessary space for himself to get a shot off. 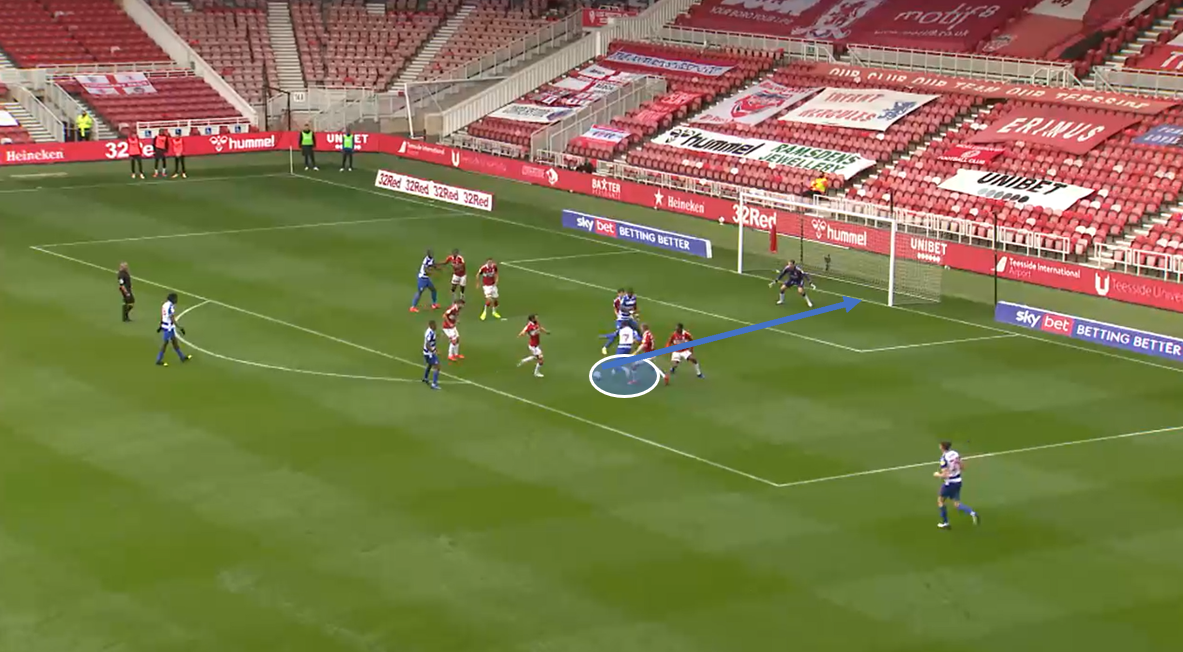 As the move developed, Olise picked up the ball in this half space and eventually forced Marcus Bettinelli to pull off a low save to his left-hand side. This was a rare occasion where Reading found the spaces to hurt Middlesbrough and had players running at a solid backline. Warnock will be wary of avoiding the same mistakes and slight adjustments in the defensive positioning of Bola will prevent these sorts of chances from coming to fruition again.

Olise’s chance was rare in the first half that flattered to deceive and perhaps the defensive shape of Middlesbrough’s midfield three was the most notable tactical pattern. Howson, Saville, and Bola were cohesive in their set-up throughout, making it extremely difficult for Reading to play through them. An example of Middlesbrough’s impressive defensive setup off the ball can be seen in the frame below. 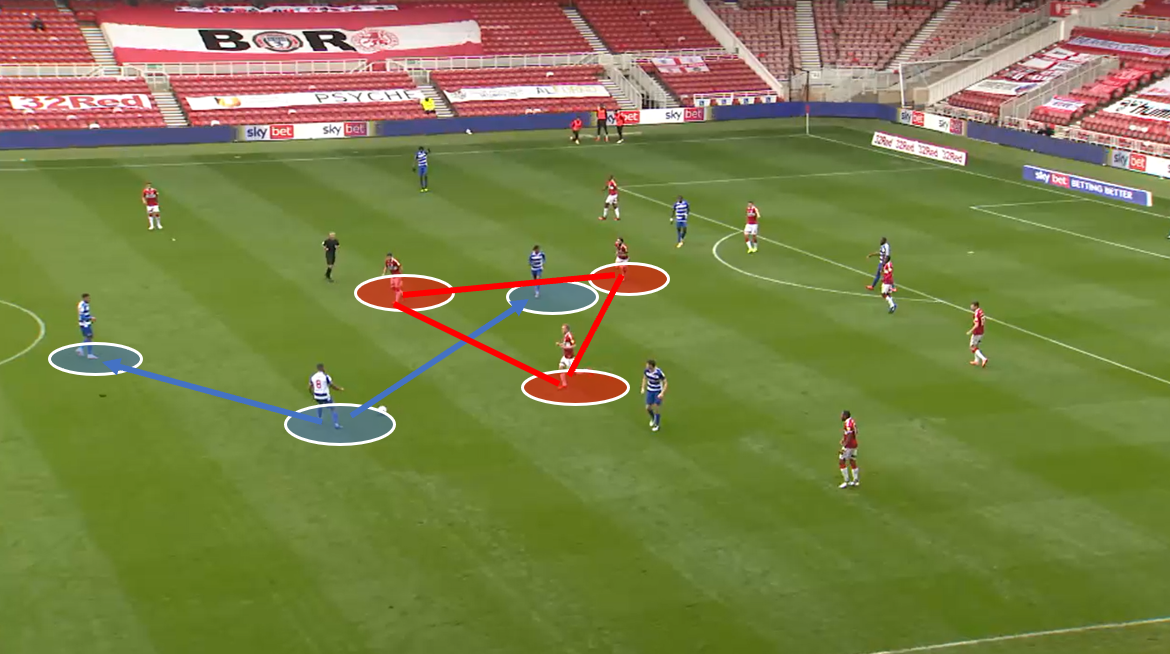 The triangular set-up of Middlesbrough’s midfield frame is evident above, with Howson playing as the deep-lying player who was challenged with tracking Olise and Ejaria who flexibly occupied the number 10 throughout. In this attack, Rinohmota has the ball high with Olise the only feasible forward option as a result of Middlesbrough’s tight and packed defensive set-up. However, Howson can spot this early and follows Olise as he drops deeper to receive the ball. 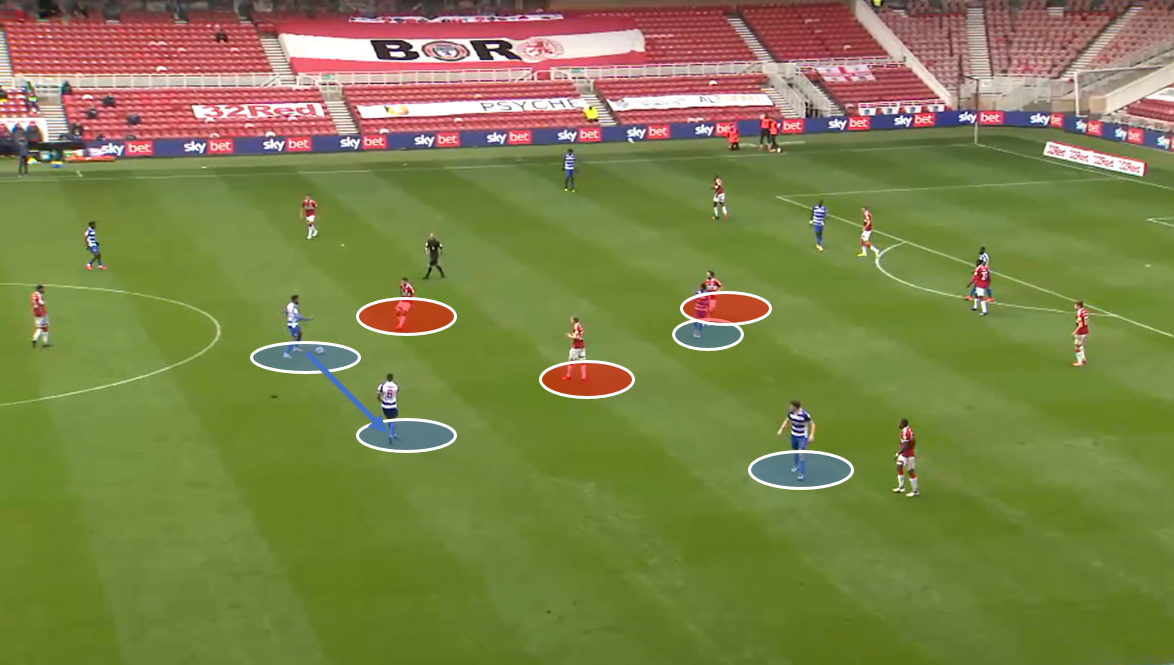 Instead, Saville presses Rinohmota, which forces him to play a sideways pass to Laurent. This is followed by Bola who then puts pressure on the ball to ensure that there is no way through the lines of Middlesbrough’s midfield. Ultimately, this leads to Laurent playing the back to Rinohmota who is forced to recycle the ball back to central defender Michael Morrison. 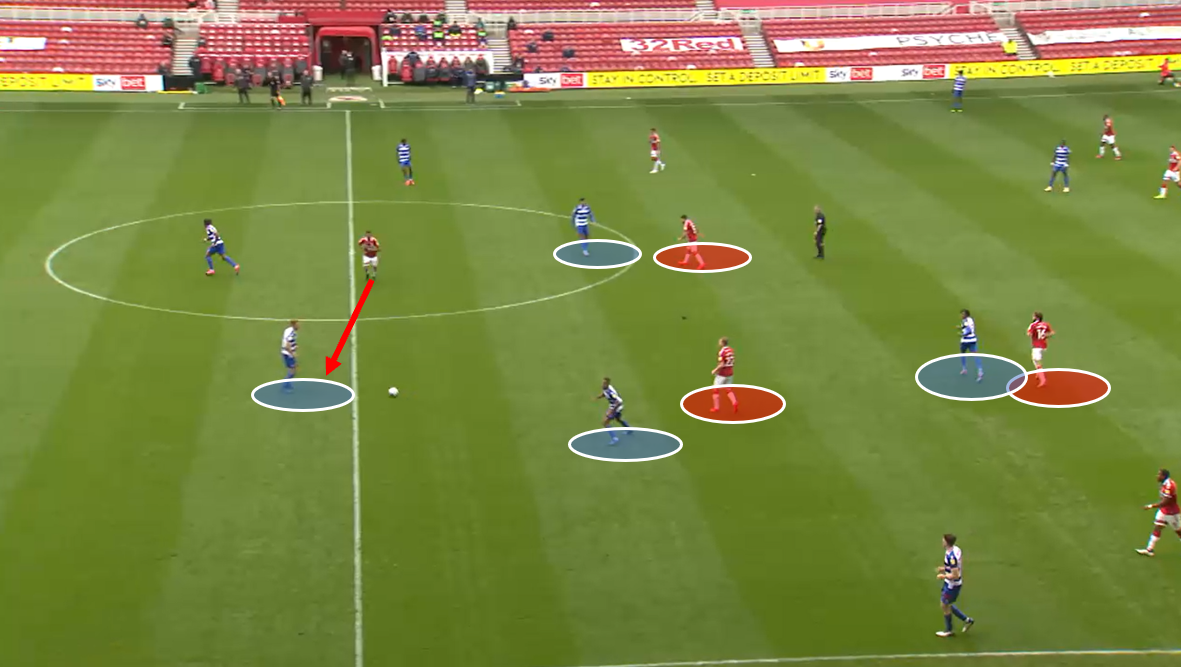 As a result of the work of Middlesbrough’s midfield three, they were able to starve Reading’s flair players of space while also constantly putting pressure on the ball. This attacking pattern was common for Reading throughout the game, especially as they played with two defensively minded midfielders. Although they did look extremely solid defensively, it did result in predictable build-up play, which meant Warnock’s men were able to stifle them time and time again.

Ejaria and Olise were flexible in their positioning as number 10’s and were interchangeable, especially in the second half. A potential solution when playing opposition like Middlesbrough is both players looking to occupy the half spaces at the same time, which would look like playing with two number 10’s instead of just the one. If Ejaria was able to occupy a narrower position in the left attacking midfield role with Olise on the right, then Reading may be able to create better chances when they have so much possession. This would provide more forward passing options for Rinohmota and Laurent who had a lot of the ball but were not able to do much with it.

Instead of playing high and in the aforementioned number 10 role, Ejaria and Olise decided to both extremely deep in the second half in the hope of better build-up play to create greater chances. In the 62nd minute this so nearly worked as the talented midfielders built the play from deep alongside Rinohmota to create arguably the best chance of the game. The first frame below shows just how deep Ejaria and Olise were as they became increasingly frustrated by the lack of space higher up the pitch, which is testament to Warnock’s successful defensive shape in the game. 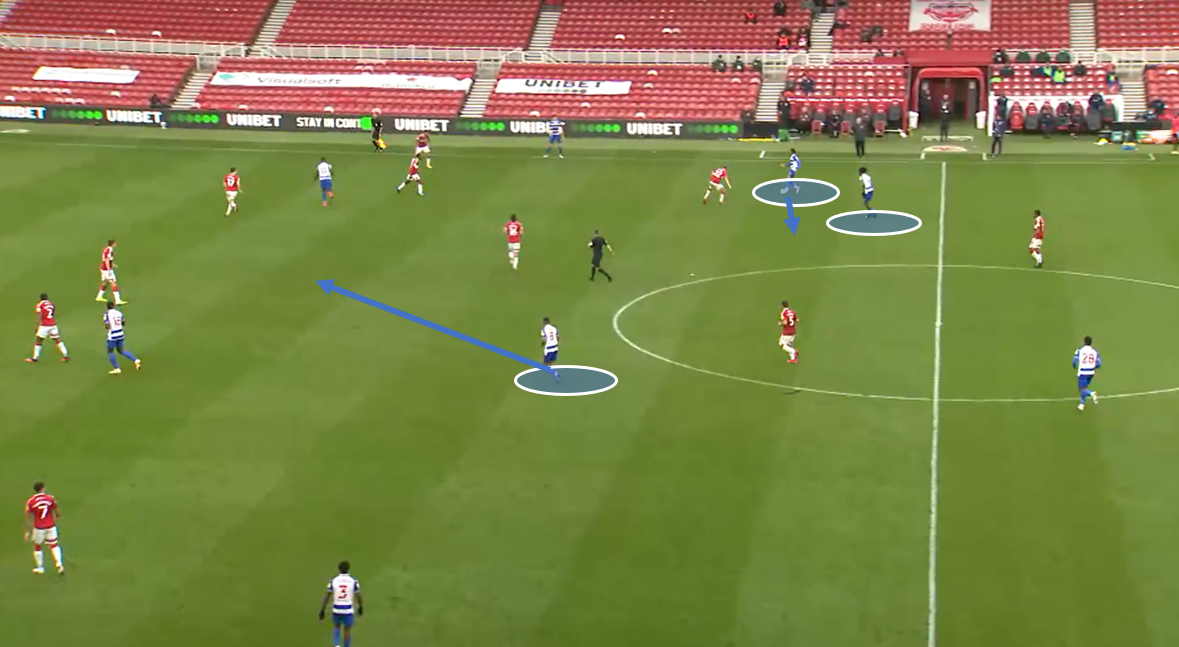 After interchanging passes with one another, Middlesbrough pushed up the pitch and became attached to these two ball players, which allowed Rinohmota to occupy the half space which Ejaria and Olise constantly found limited. This, in turn, allowed Ejaria to make a run from the right-hand side to pick up the ball from Rinhomota on his favoured left foot. 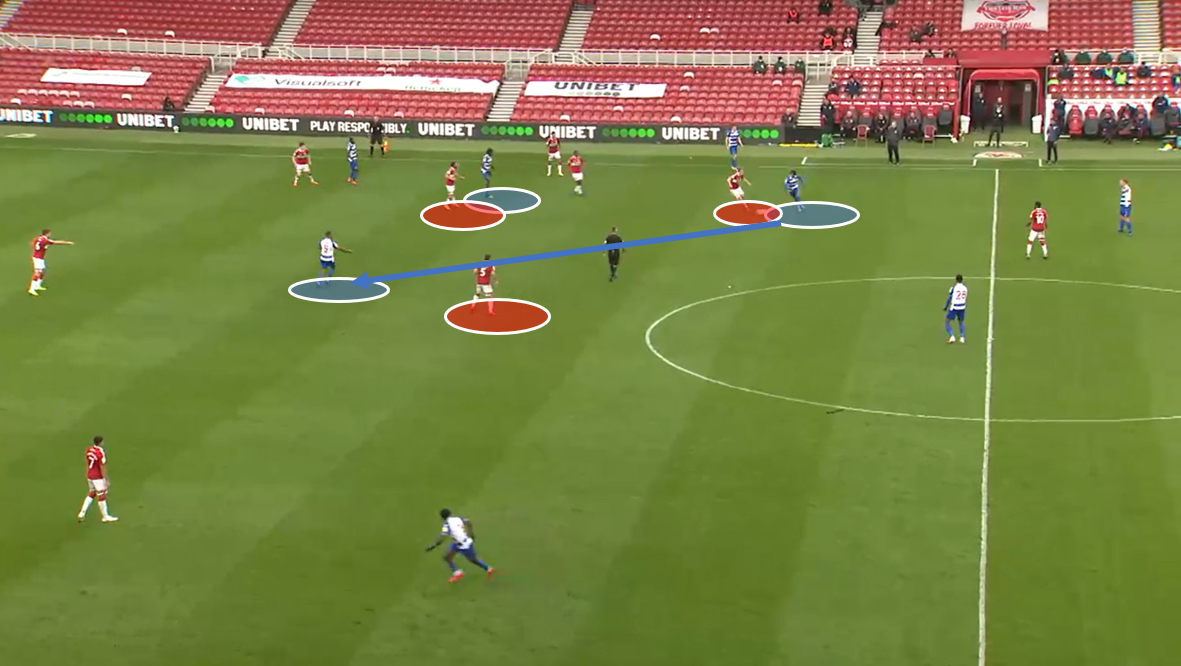 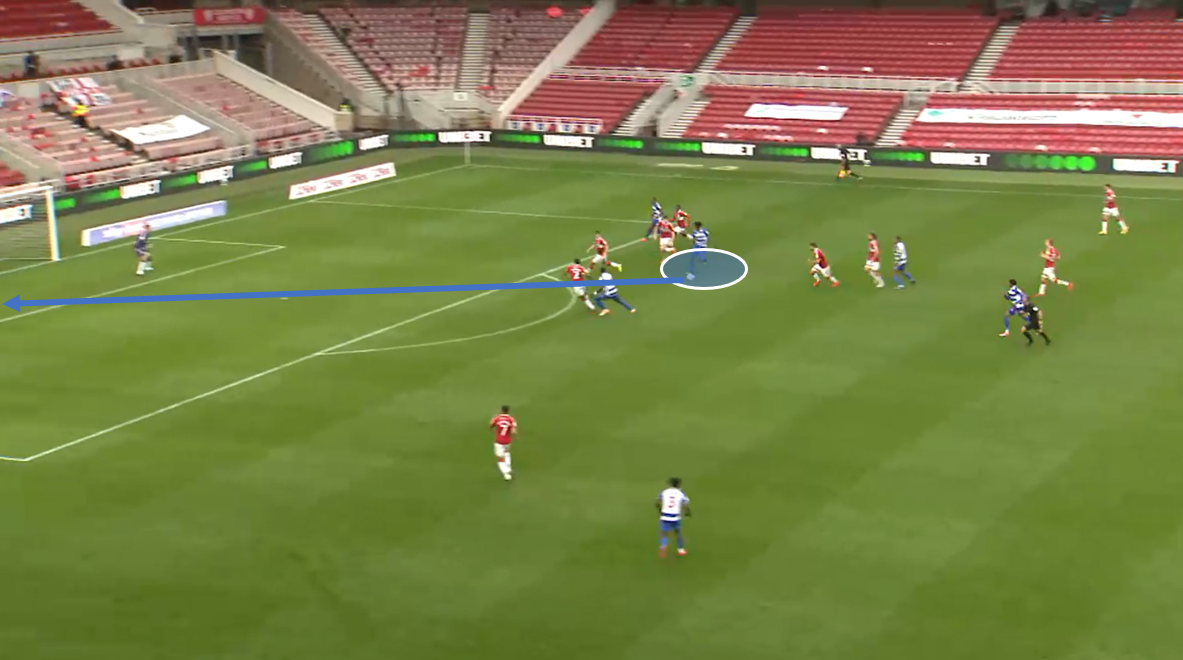 Ejaria was eventually picked out and had a free shot at goal but blazed it harmlessly wide. Although it didn’t result in a goal, Ejaria’s role in the game was becoming more and more important, and in order to achieve this, both he and Olise had to drop extremely deep. The reason this was so effective in this case was that it dragged Middlesbrough’s midfield three out of their positions as they became attracted to the ball. Rinohmota was intelligent enough to notice the space developing and occupied it to great effect. However, moves like this were hard to come by and this was a rare opportunity when they were able to manipulate the ball at speed to unease a seemingly impenetrable Middlesbrough backline.

Howson nearly nicks it for Boro

Warnock was unable to sign a striker on the domestic deadline day on Friday, which means they are lacking numbers in forward positions. Although goalscoring could potentially be a problem for Middlesbrough they thought they had snatched the winner in the 69th minute when Howson put the ball in the back of the net. However, it was disallowed as the linesman judged Howson to be offside.

The goal came from a wide free-kick, which fell to Tavernier on the edge of the box. Tavernier’s shot was blocked yet was not cleared properly which caused chaos inside the Reading box. 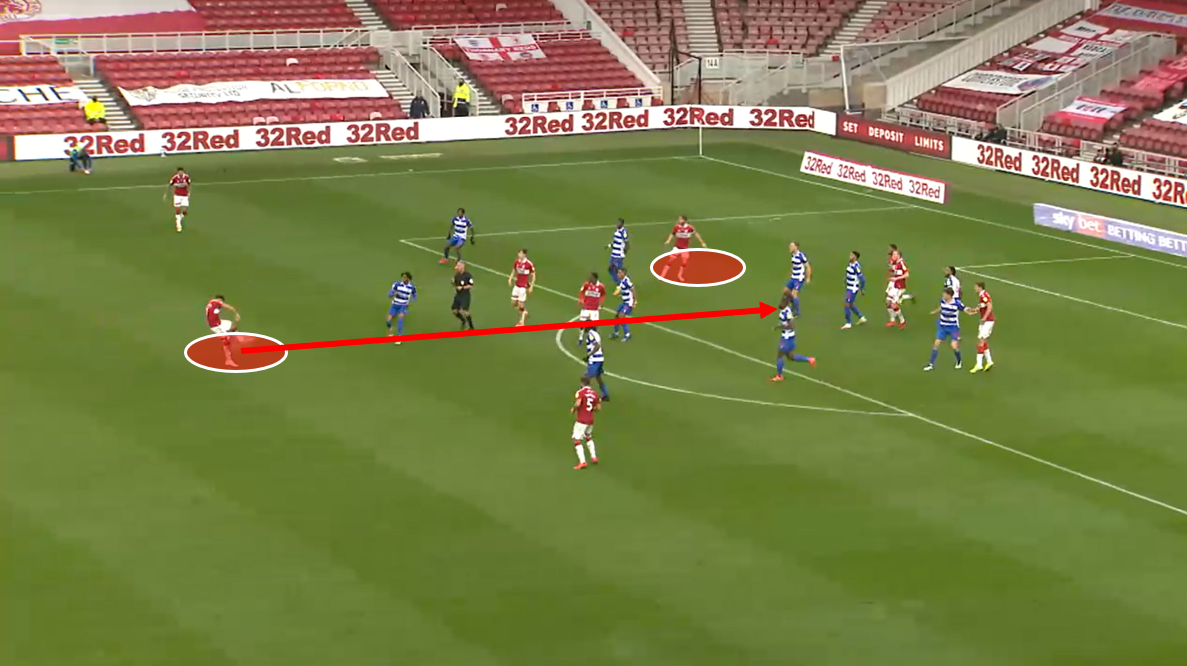 The ball eventually fell to Saville in the middle of the box who was able to flick the ball over to the left-hand side where Howson found himself in space. Howson delightfully volleyed home but was called offside in a dubious call, which didn’t please Warnock one bit. 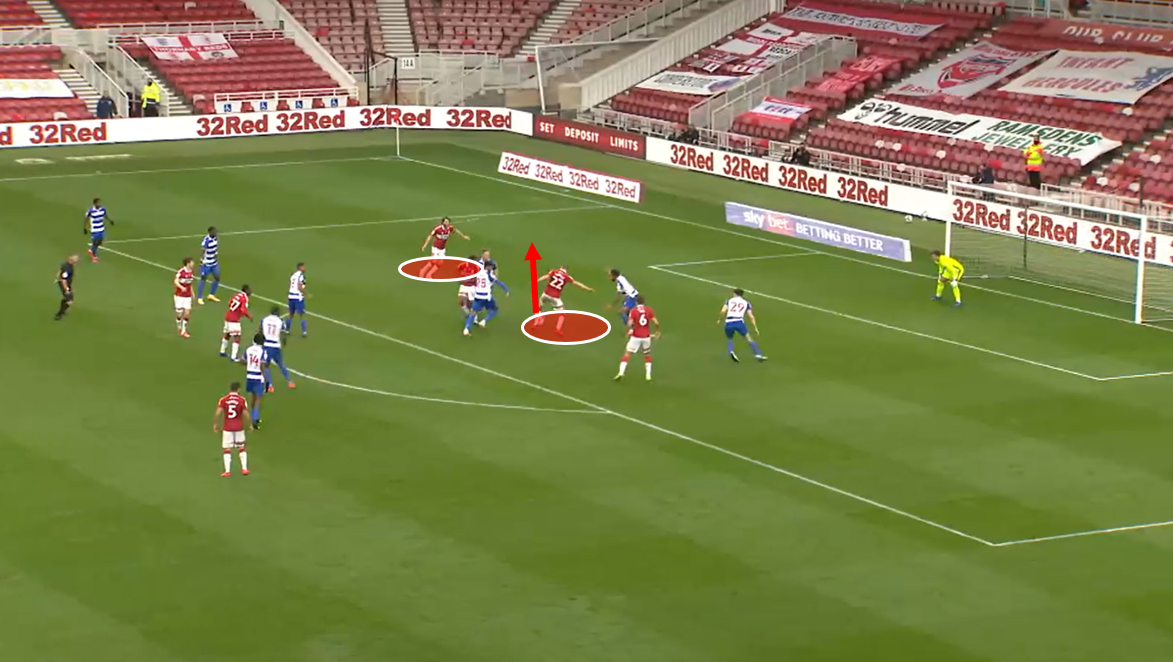 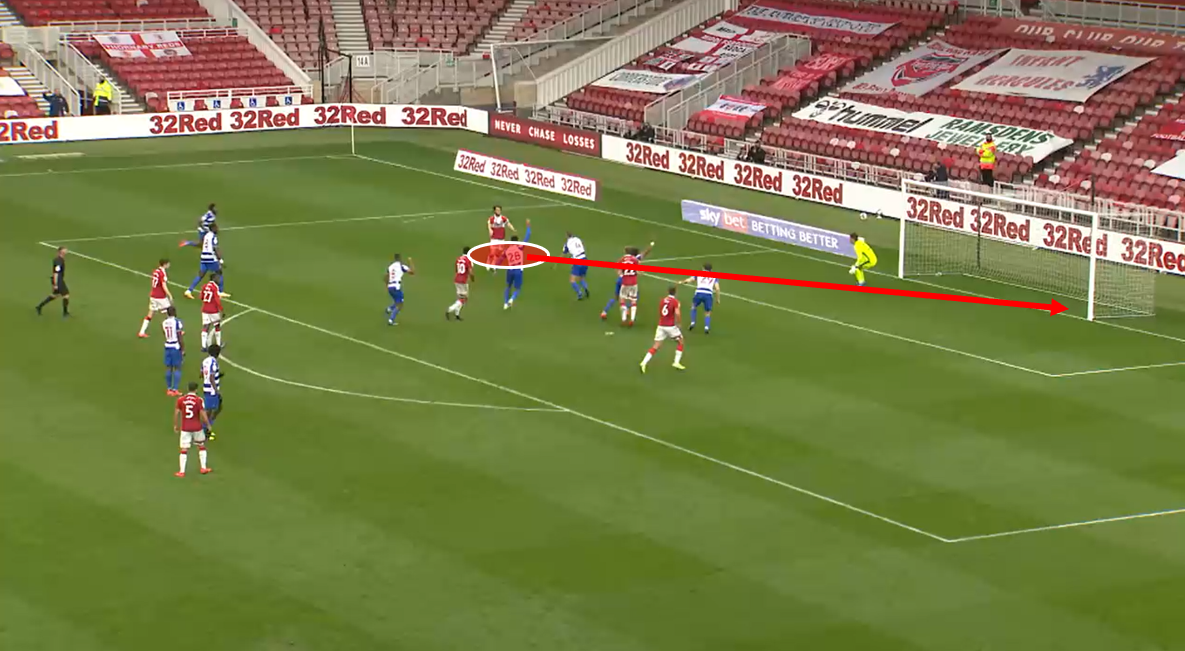 It looked a tight call and Middlesbrough showed the desire to win the second balls that came in the immediate aftermath of a disappointing free kick. A similar chance came Howson’s way in the 77th minute and this time he was not offside, however, it was well blocked off the line by a Reading defender.

The second Howson chance also came immediately after a free kick which was hoisted into the box and cleared to Tavernier who linked up nicely with Sam Morsy who was able to lift a dangerous ball into the box. 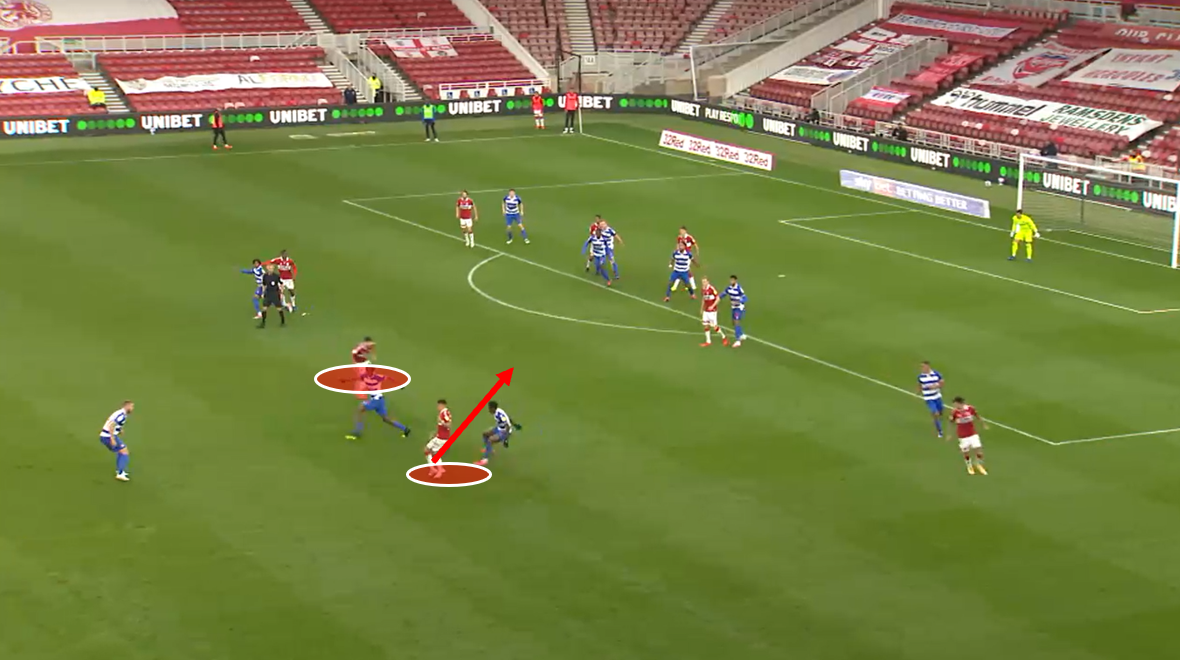 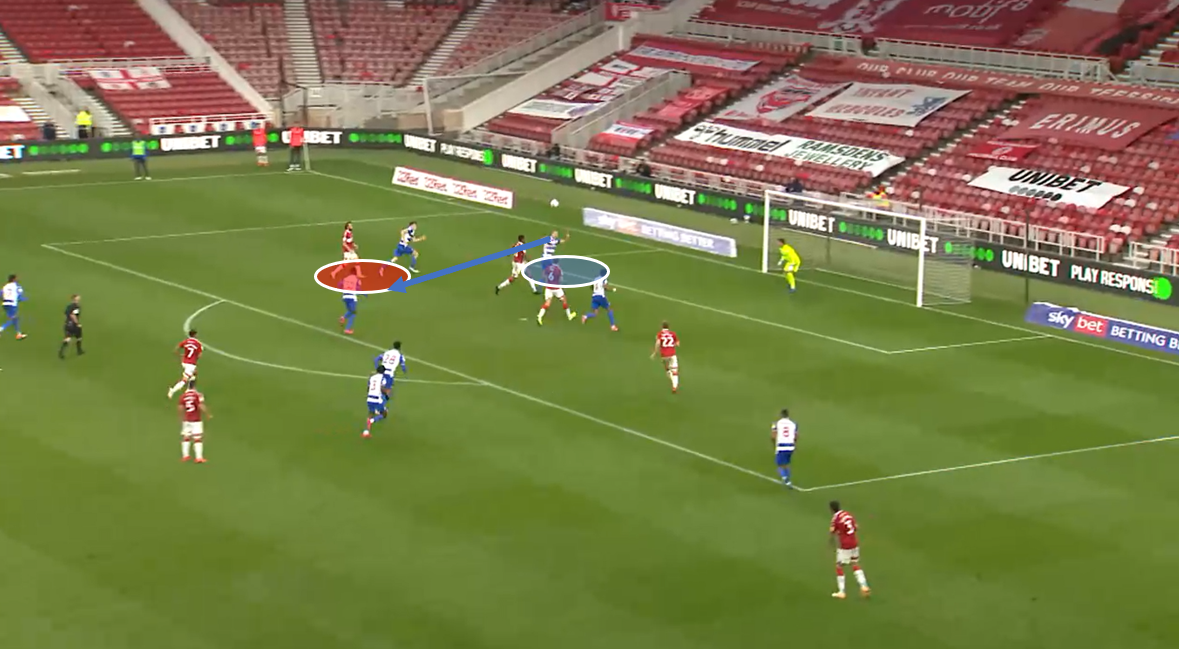 This ball was cleared, and Howson dropped off to the back post on the left-hand side where he found himself in space on that side once more. His sharp shot was cleared off the line by Moore and eventually Reading got the ball away from goal. 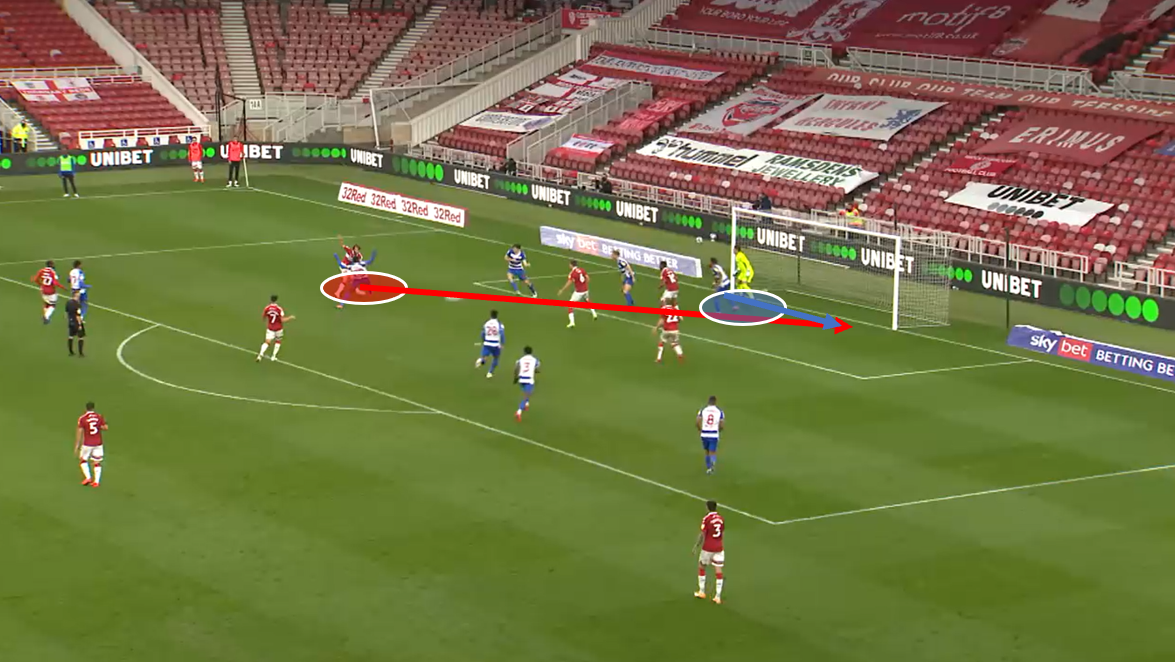 Middlesbrough’s main attacking output was therefore from set pieces and the second balls that resulted from these. This is clearly not a sustainable formula, yet it so nearly gave Middlesbrough an invaluable win through an unlikely goalscorer in Howson who was denied twice.

In a game that severely lacked chances and quality in the final third a point is just about a fair result. Warnock may feel slightly aggrieved with the offside call that ruled out Howson’s goal in the 69th minute, yet a point against a team that previously won every game is not the worst of results.

Reading, on the other hand, have lost their 100% start to the season. They will, however, be relatively happy with a point on the road against a resilient Middlesbrough. Reading’s next game is a home fixture against a struggling Wycombe Wanderers, while Middlesbrough go to Ashton Gate to face a Bristol City team who are also unbeaten like Reading. 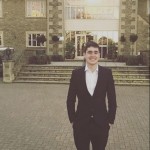