LA Galaxy welcomed current MLS Cup champions Seattle Sounders for what would be the Galaxy’s last home game of the season. The Galaxy looks an improved side under interim Head Coach Domini Kinnear, coming off the back of a 2-1 win against Real Salt Lake last weekend.

Brian Schmetzer’s men had nothing less than a win on their mind coming into this game, with the 2020 Playoffs fast approaching Seattle needed to bounce back after a defeat to the Colorado Rapids last weekend.

Final score: LA Galaxy 1 – 1 Seattle Sounders, two goals arriving late in the second half. Former Premier League and Manchester United ace Chicharito rounded off a quick counter-attack in the 78th minute finishing down low to the goalkeepers right from an acute angle driving into the box.  Similarly, Seattle centre-forward Raúl Ruidíaz finished low just inside the box at the 93rd minute

The tactical analysis below looks at the most prominent aspects of both sides performance. Our analysis identifies key tactics and talking points, as well as how both managers set their team up to get success.

LA Galaxy: 4-2-3-1
David Bingham played 90 minutes between the posts protected by centre-back pairing of Daniel Steres and Giancarlo González along with Emiliano Insúa and Julian Araujo as full-backs. Sebastien Lletget and Perry Kitchen lined out as the double-pivot with Cristian Pavón and Yony González playing on the left and right side of midfield respectively. Lone striker, 22-year-old American forward Ethan Zubak lead the line, making his second consecutive start under Kinnear just in front of Sacha Klještan.

Seattle Sounders: 4-2-3-1
Swiss-American Stefan Frei starts in goal while Nouhou Tolo, Xavier Arreaga, Shane O’Neill and Cristian Roldán make up the back four from left to right respectively. Gustav Svensson and Jordi Delem formed the double-pivot as Joevin Jones and Ethan Dobbelaere operated on the flanks. Just in front of the midfield was playmaker Marcelo Lodeiro, playing close to but behind Raúl Ruidíaz.

Seattle primarily looks to build through the thirds, from restarts they generally start with short passes inside their third, invite opposition forwards in and then exploit the spaces to play forward by using the overload. The sounders do this with the goalkeeper, the back four and the double-pivot.

As the attack graduates to the final third, this is where we see Seattle’s dynamic attack. Most often the Sounders will create overloads in the wide areas and look to penetrate the backline with short combinations entering the box or crosses to the centre-forward. When passing options are neutralised, Seattle is very quick to find a way back and across to the opposite flank where the wide midfielder will be waiting to receive and attack the weak-side. 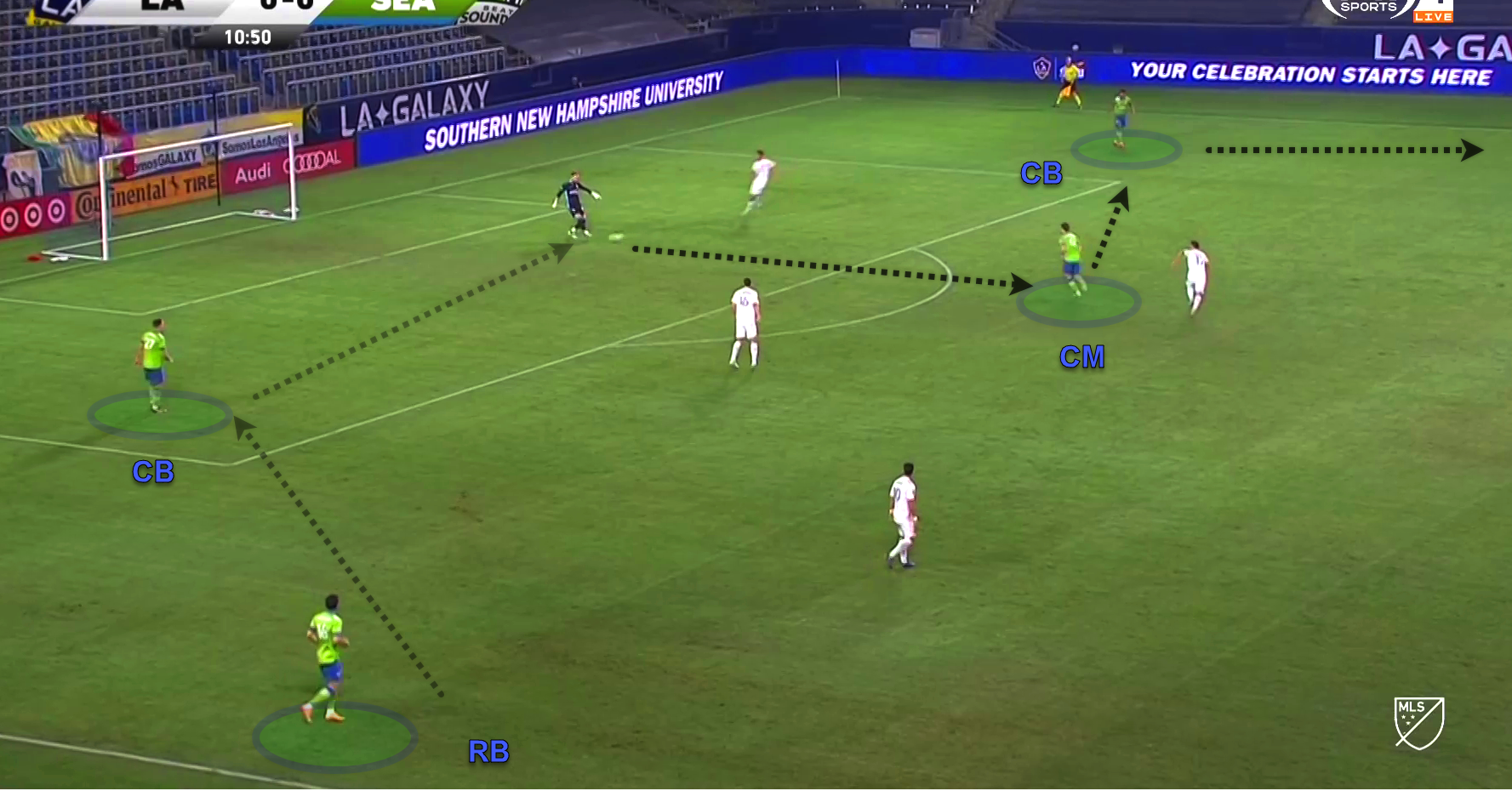 Above, we see Seattles starting shape when building from the back. The goalkeeper Frei makes himself available to receive pass backs to invite pressure, create space and facilitate the switch to the other side. One of the double-pivots will drop and play a one-touch pass to the unmarked player.

The following four images capture Seattle’s attacking principles in the build-up and penetration. 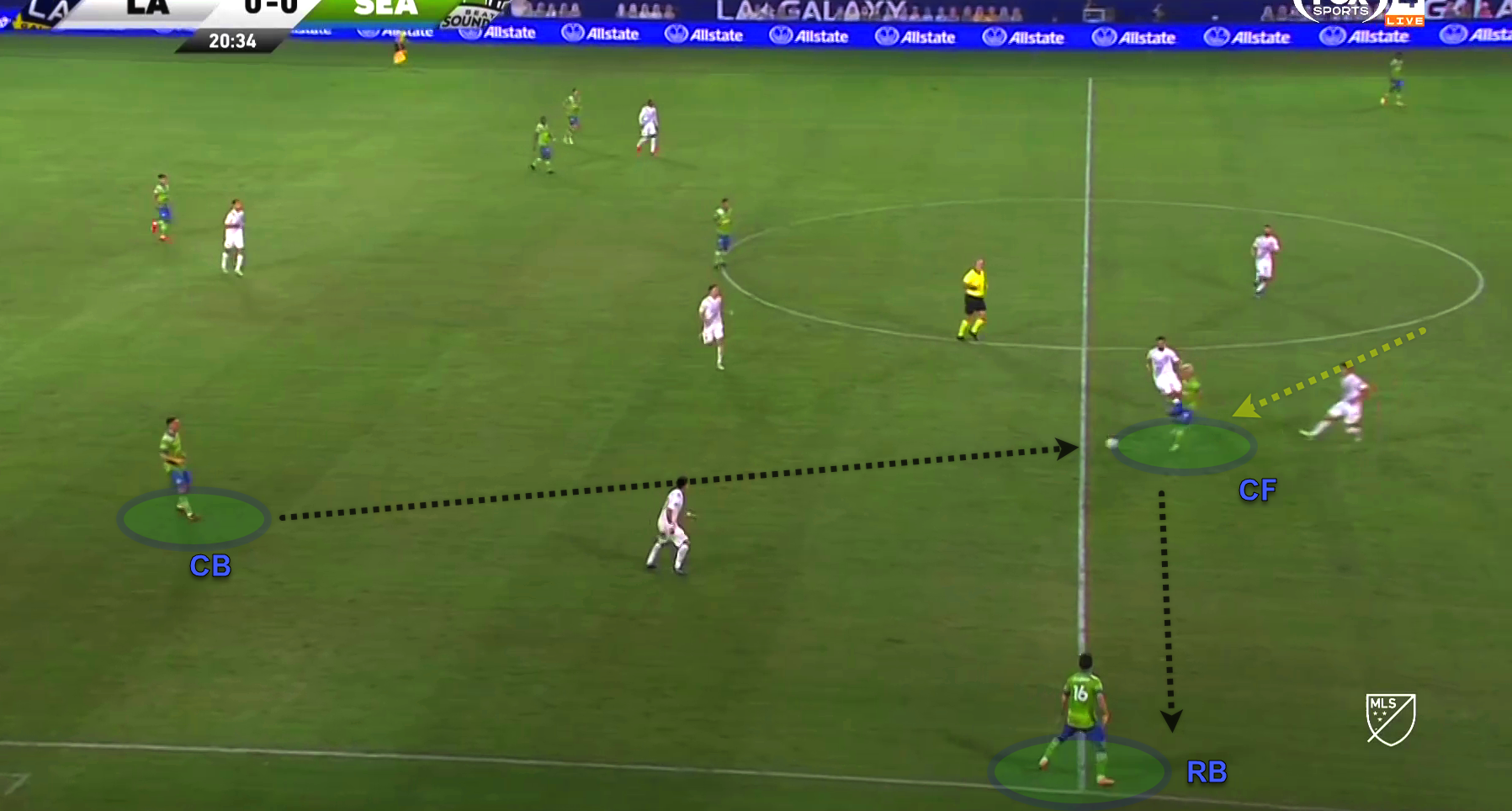 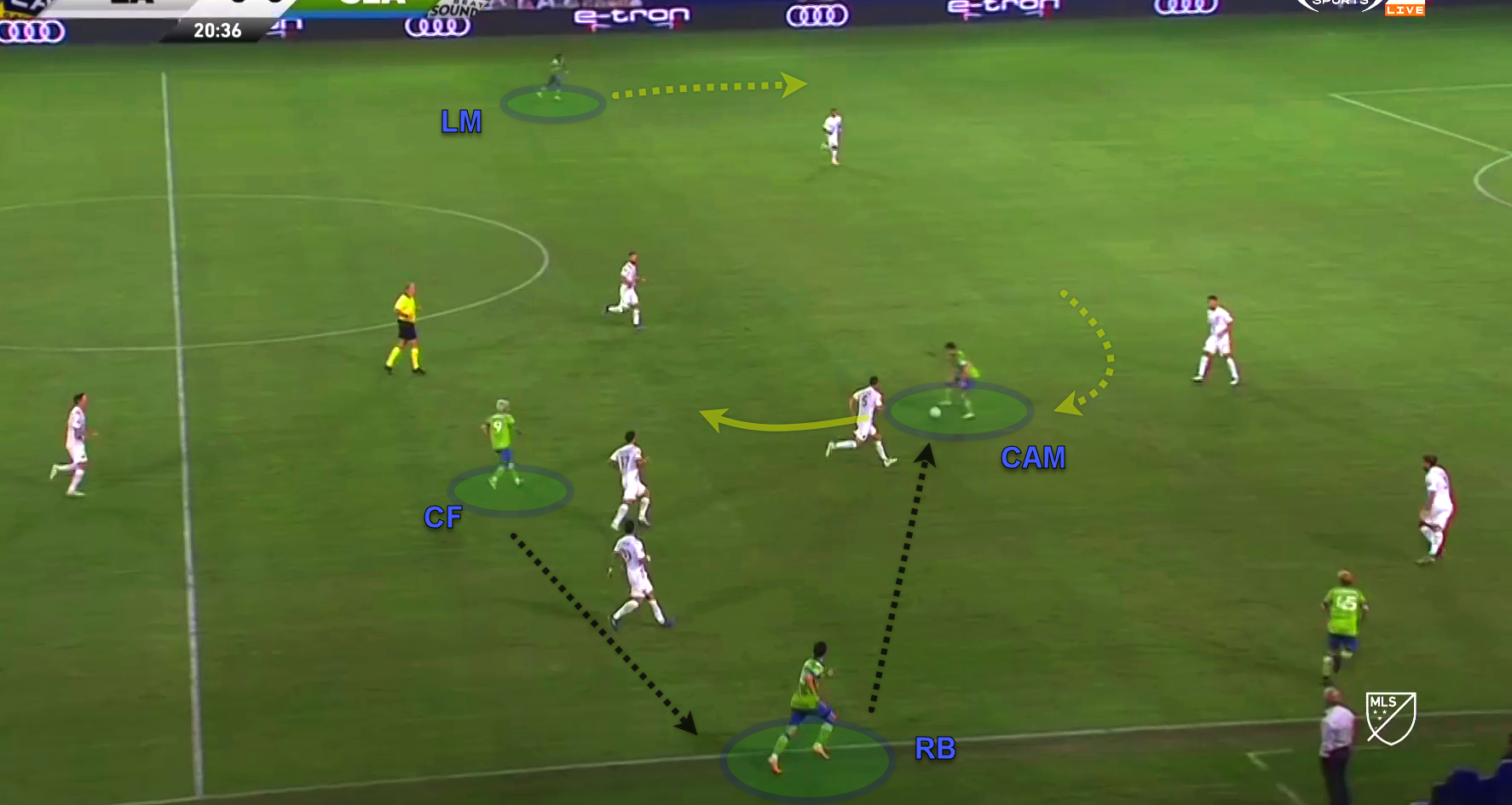 The ‘RB’ then plays a pass to the ‘CAM’ who moves into the half-space channel between the midfield and defence, making himself difficult to mark. The ‘CAM’ turns and prepares to pay a long pass to the Galaxy’s weak side. 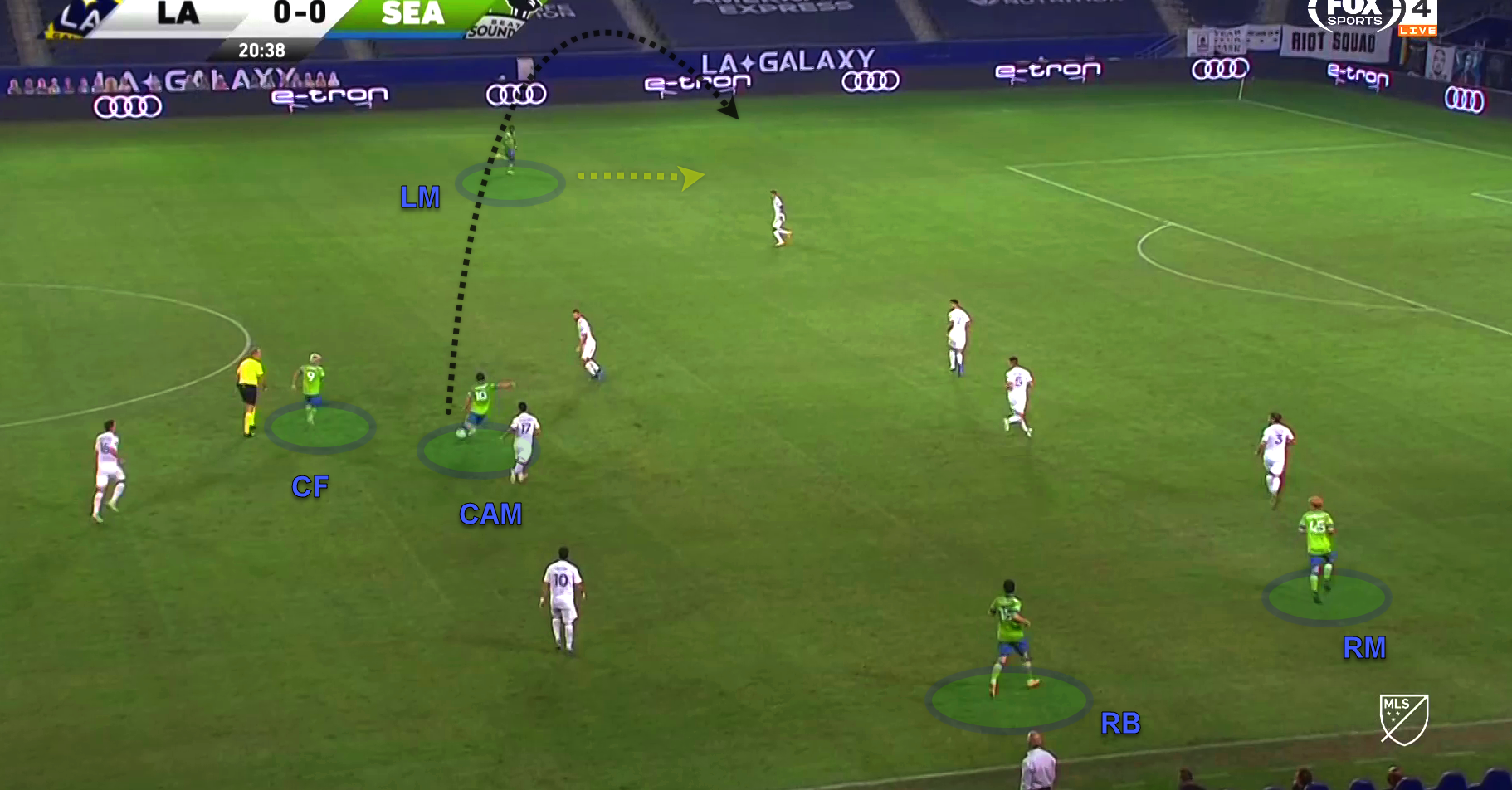 The ‘LM’ in anticipation takes up a high-wide position, so upon receiving the ball he is in a good position to drive at the Galaxy box. 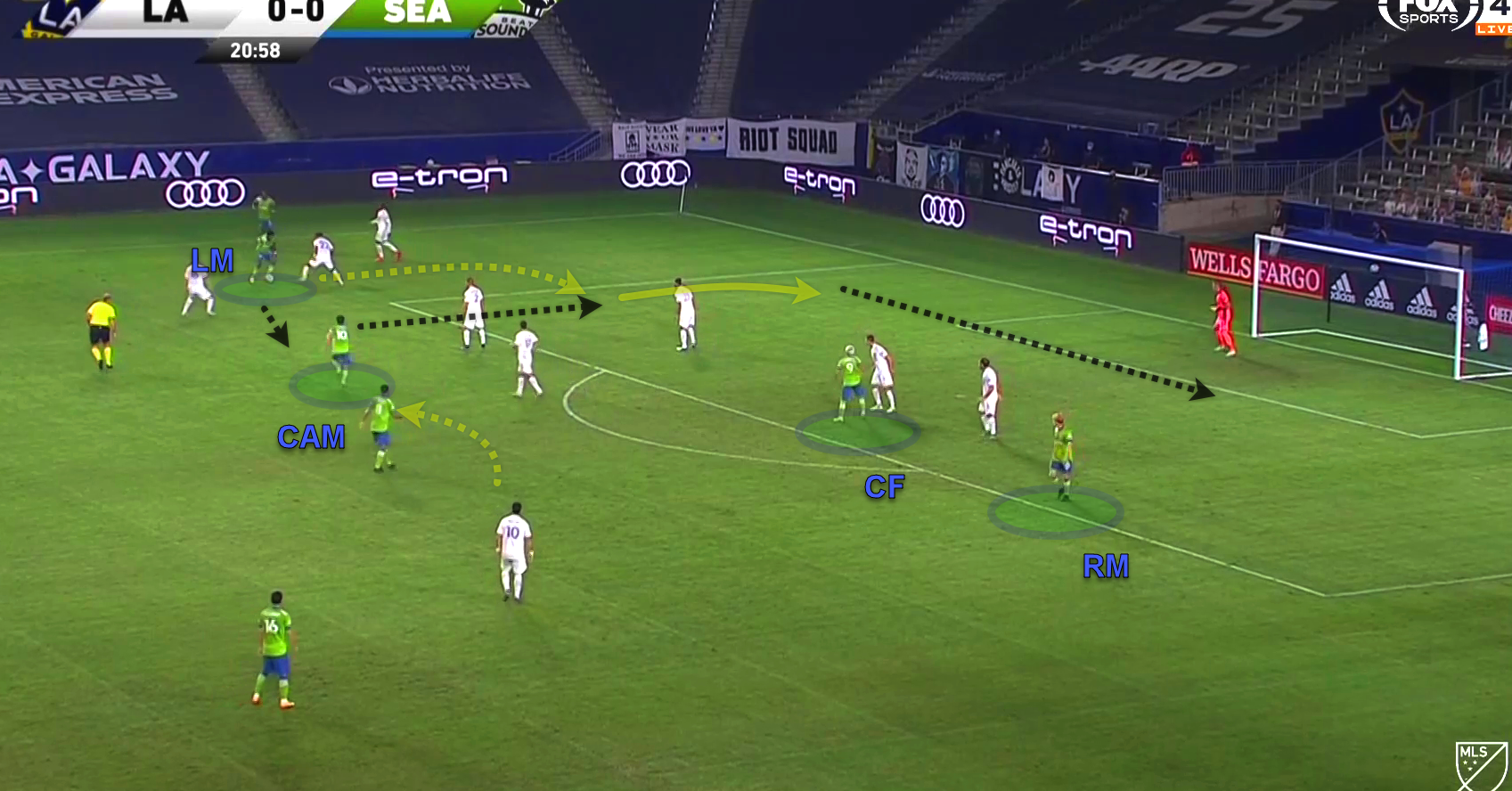 The ‘LM’ holds up the ball, plays a combination with the ‘LB’ who overlaps and finds an angle for a pass inside back to the ‘CAM’. The ‘CAM’ plays a ‘1-2’ with a firm pass into the box for the ‘LM’ to meet and cross to the ‘CF’ and ‘RM’ just inside the box.

Due to the Galaxy’s low-centrally compact block, Seattle sought chance creation from crosses. From 22 attempted crosses only 8 met the intended attacker in the box, giving Seattle a 36% crossing accuracy. In the transitions to attack, Seattle would often opt for back passes to the defenders where they could regain their shape and build again through the thirds.

The Galaxy target success in the transitions

Yes, the Galaxy did build through the thirds when required, if they won the ball back in their third and Seattle dropped deep to defend the space. Then we would see the Galaxy play low-risk-low-reward lateral passes before playing into midfield.

However primarily, the Galaxy sat deep during the defensive phase, inviting the Sounders forward. In doing so, they facilitated the opportunity to counter-attack against their stretched defence and high line.

Even during goal-kicks, the goalkeeper would most often play a long pass forward to meet the head of the 6ft2″ centre-forward Zubak. The American striker would offer flick headers onto supporting midfielders, or control and take the ball down to then link up with the midfield.

When entering the final third, depending on Seattle’s shape the Galaxy may opt to go direct to the goal against a stretched defence or create overloads out wide to cross the ball. The three images below show the Galaxy’s intention from wide areas. 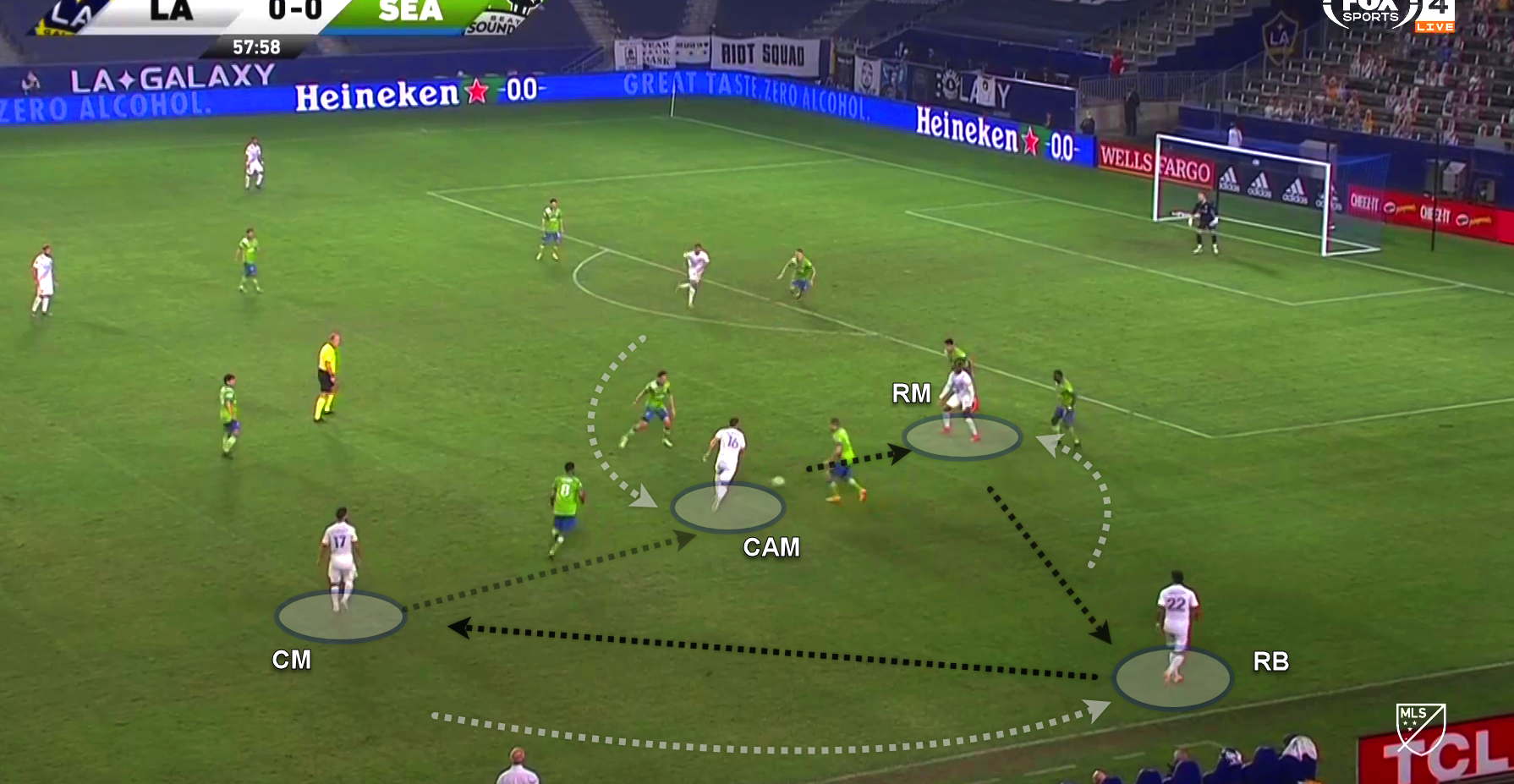 Above, we see the Galaxy combine out wide, with the ‘RM’ moving inside, the ‘CAM’ dropping deep and the ‘RB’ advancing into free-space. All four players combine with movement to create an angle for a cross. 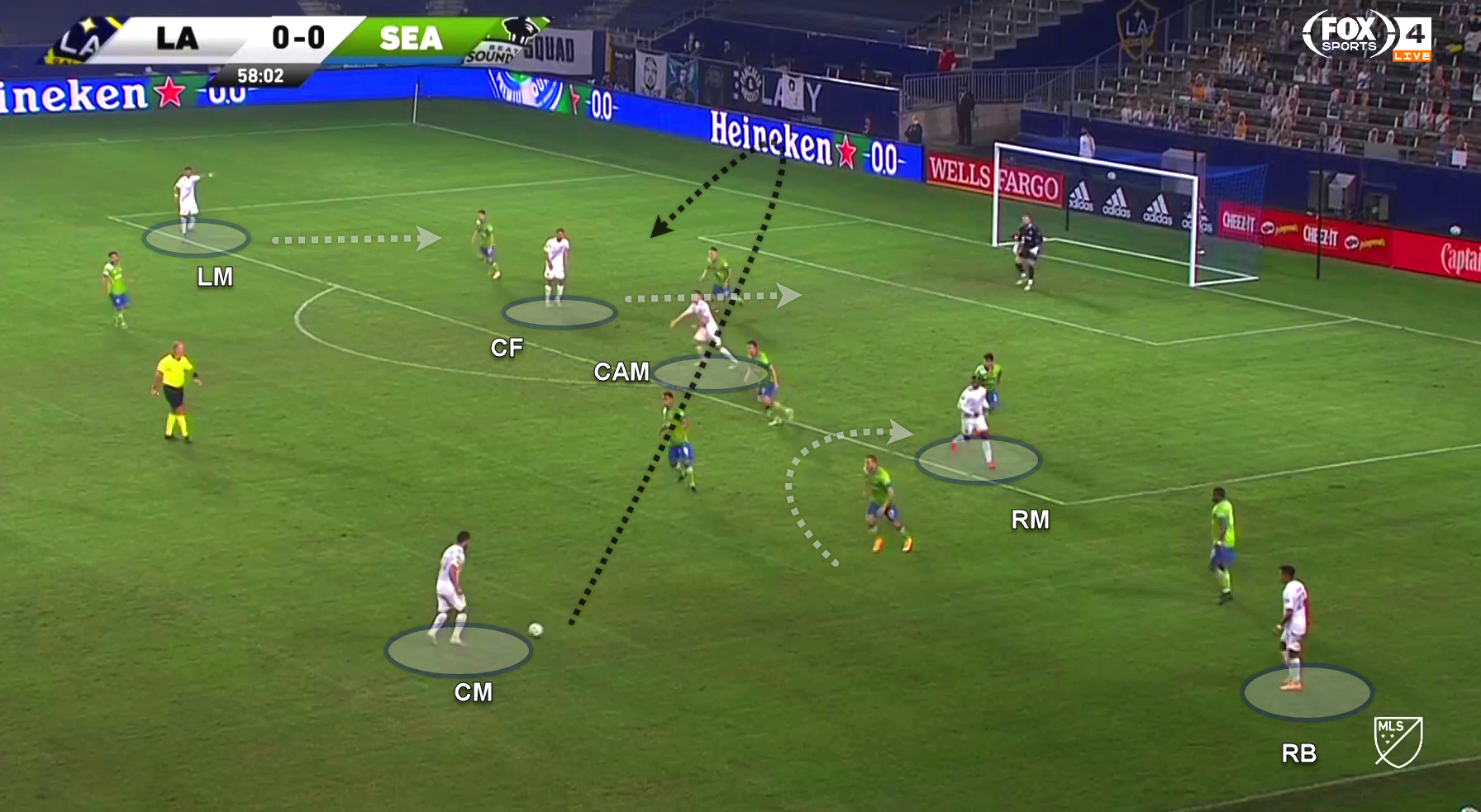 The ‘CM’ looks up before delivering a cross to the back post to the ‘CF’. Notice the Galaxy’s movement forced Seattle to sacrifice numbers in midfield to defend the five advanced Galaxy attackers. 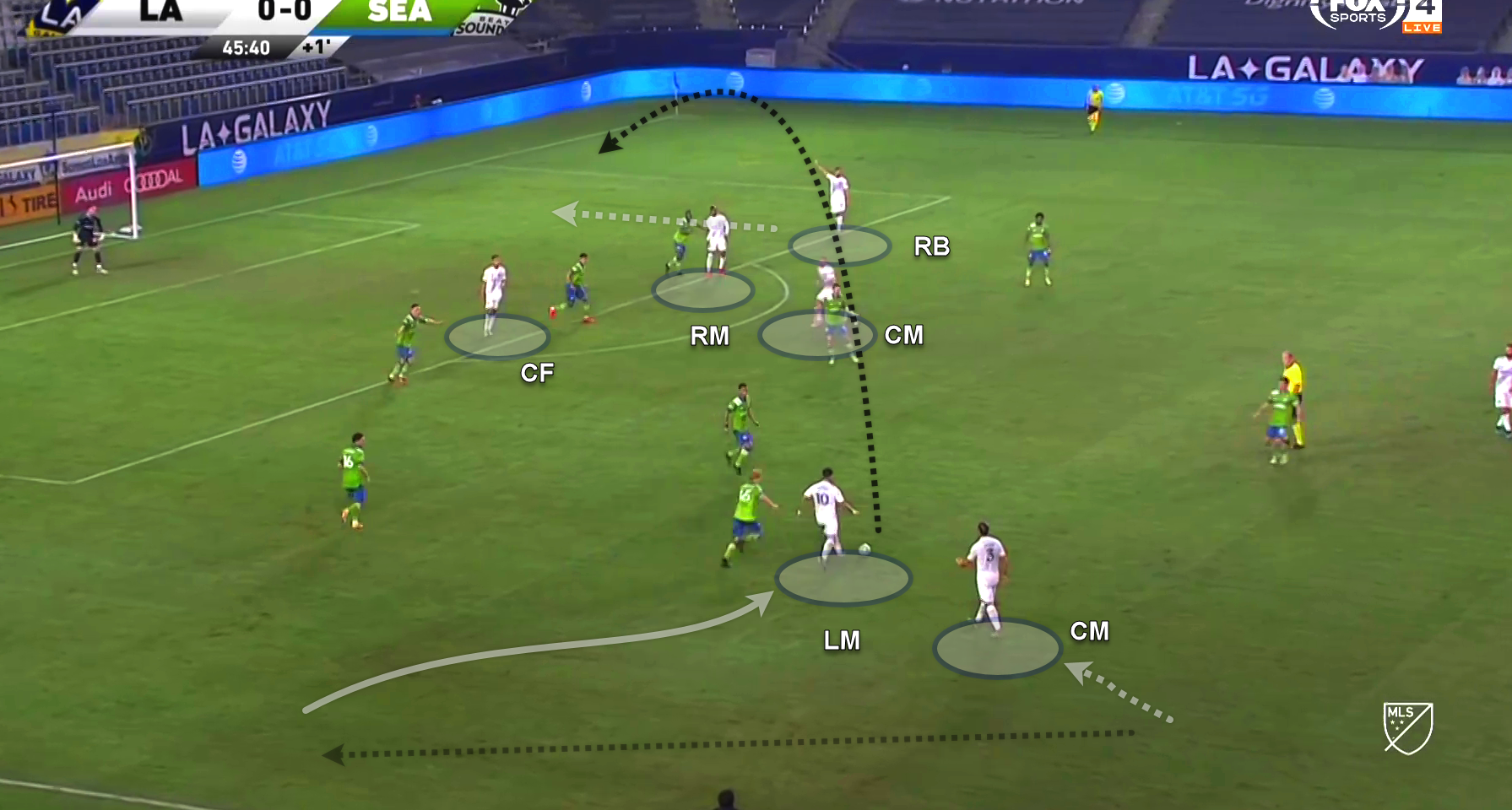 Above, we see the ‘LM’, a right-footer operating on the left cut inside to offer an in-swinging cross to the back post to meet the run of the advanced ‘RB’.

Attempting 14 crosses into the box, only 4 met an attacker, meaning the Galaxy had a crossing accuracy of 29%. Playing against a possession-based Seattle, the Galaxy we knew were targeting success by way of counter-attacks and quick transitions. Notably when the Galaxy won the ball back in the middle and final third, we would see the four highest attackers drive at pace to the Seattle box to offer passing options forward ahead of the ball carrier.

The four images below capture this principle perfectly as the Galaxy win the ball back in their third, counter-attack and nearly score. 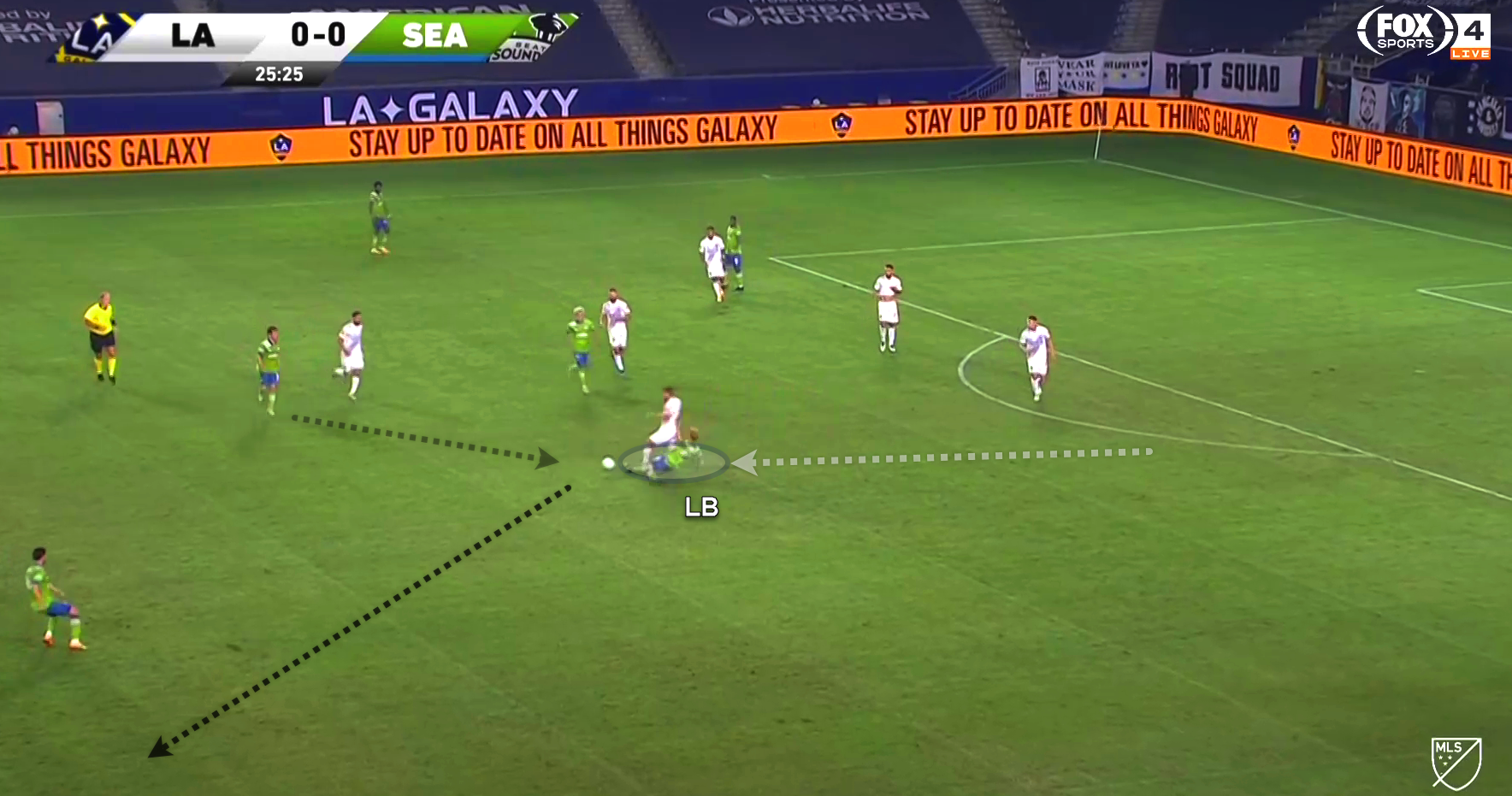 Above, the ‘LB’ for the Galaxy intercepts a Seattle pass; then on his second touch, he plays a long pass forward into the run of the ‘LM’. 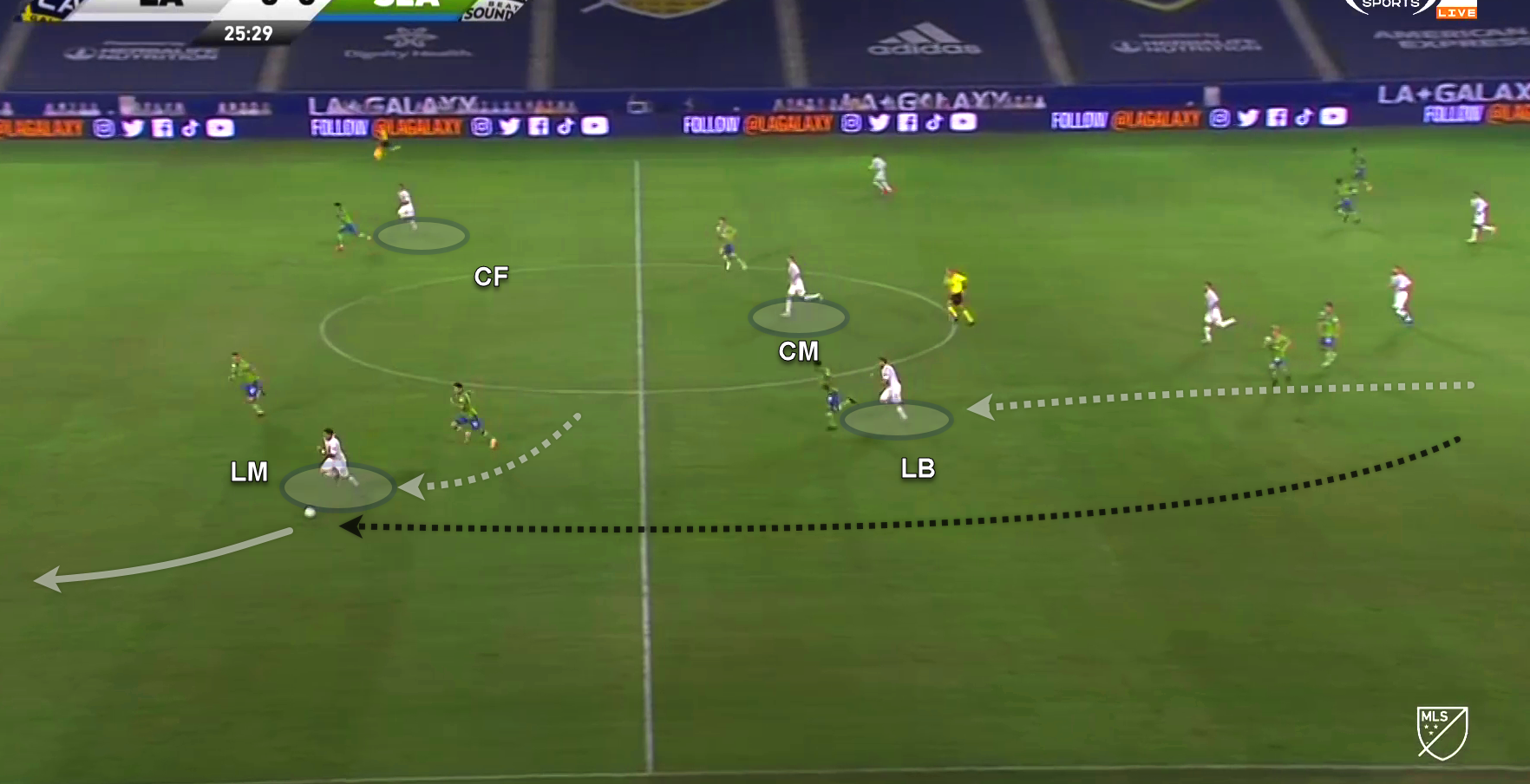 The ‘LM’ dribbles for a short distance before turning inside to play a pass to a forward run from a teammate.

The ‘LM’ identifies and plays a pass to the ‘CM’ supporting from behind. Notice the ‘LB’ continues his run forward, serving to be an option in the box as well as helping create space for the ‘CM’ to receive a pass. 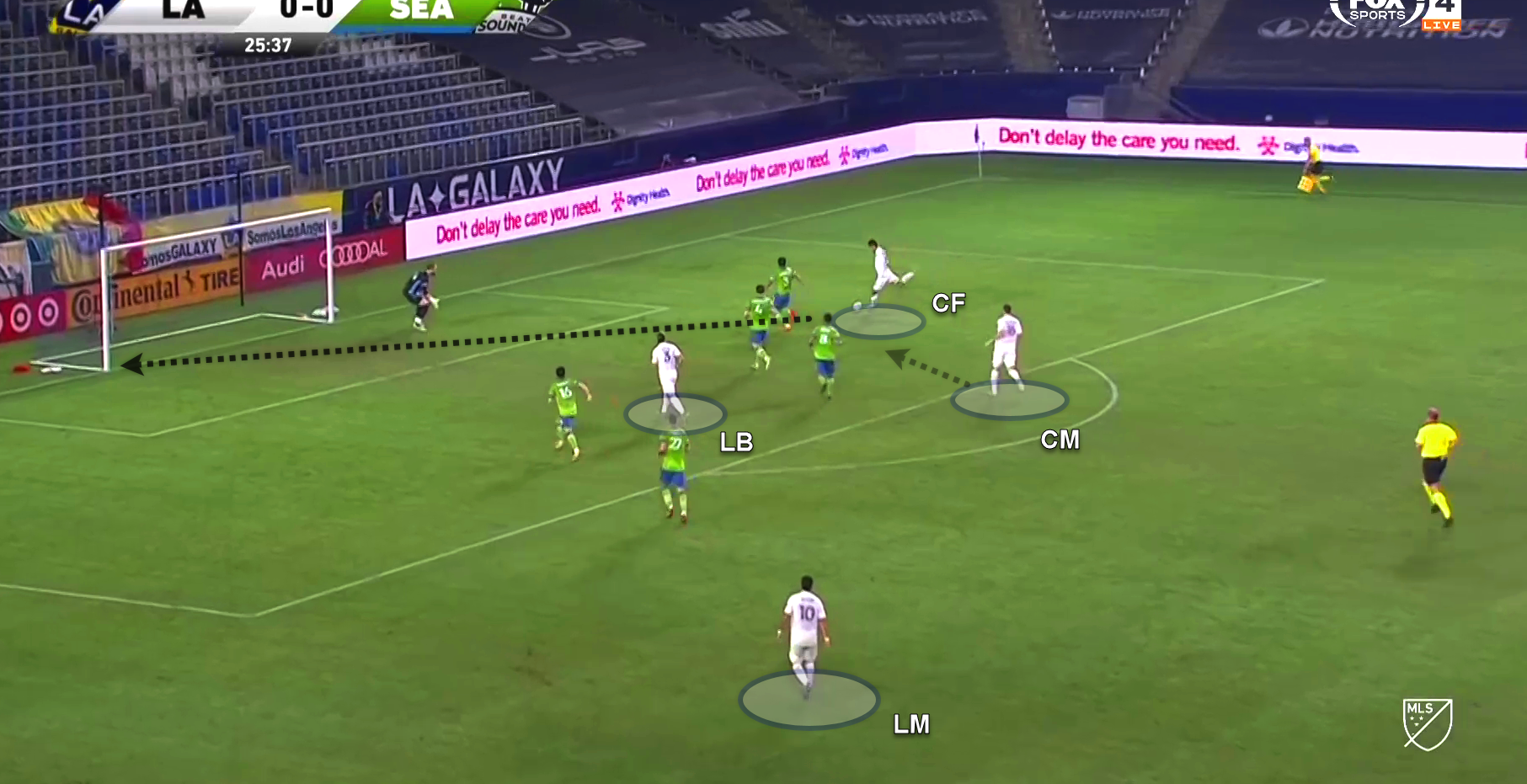 The ‘CM’ receives and plays a pass into the run of the ‘CF’ who adjusts his body well to receive the ball facing goal. The ‘CF’ Zubak strikes low and misses narrowly with a deflection off the far post.

The Galaxy counter-attacked five times, however, only managing 3 shots on target from 13 attempts. Chicharito’s goal came by way of a fast counter-attack against a stretched Seattle defence. Considering the quality of the opposition, the Galaxy did well in and out of possession, to neutralise their opponent’s attacks and create chances based on Seattle’s’ weakness, a high backline.

The Galaxy looks an improved side under interim Head Coach Kinnear; defensively they are more organised, intense and harder to break down. Also, as they go forward, they look a threat more often from multiple positons such as out wide as well as counter-attacks as players seem more confident and clear in their attacking intent.

Seattle seems to be losing some momentum in the last two games having suffered a defeat away to Colorado last weekend and now a draw away to the Galaxy. Brian Schmetzer’s will be looking for his side to bounce back with a win in the final game of the regular season against San Jose next weekend.

Be sure to check back in with us at Total Football Analysis as we cover all the action in the 2020 MLS Playoffs.