Zinedine Zidane suffered his heaviest defeat as Real Madrid manager in peculiar fashion at Estadio Mestalla on Sunday night as they crashed to a 4-1 thrashing in which they only conceded three shots on target, all from the penalty spot.

Real Madrid conceded three penalties in a La Liga game for the first time in history, with Carlos Soler duly converting all three, as each of the Real Madrid defence conceded a penalty each, with Raphaël Varane converting an own goal so as to join the club. For Los Blancos, it was Karim Benzema who opened the scoring and looked to get his team off on the right foot, but their joy was shortlived.

This tactical analysis of the La Liga win by Valencia over Real Madrid will highlight how the tactics of Javi Gracia were enough to overcome Zidane. The analysis looks at how Real Madrid fell to their second defeat of the season, falling behind Atlético Madrid and reducing their lead over Barcelona. 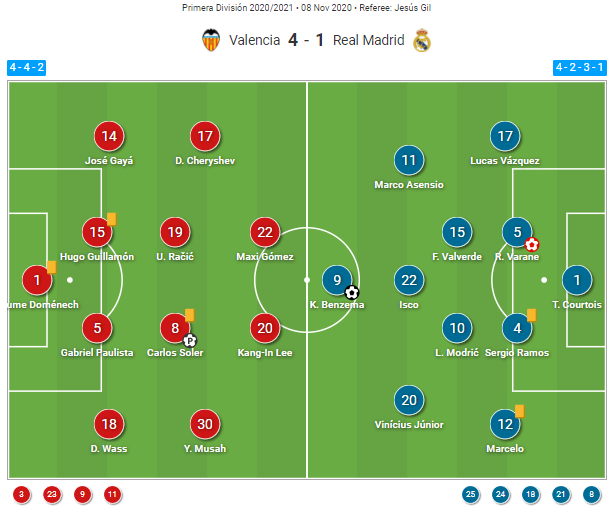 Valencia made just one enforced change from the side who saw just as much drama in the 2-2 draw with Getafe, as Uroš Račić came into midfield, with Daniel Wass moving back to right-back with Thierry Correia suspended after picking up two yellow cards in his last outing.

Real Madrid were forced into changes too. Eden Hazard and Casemiro were ruled out after testing positive for Covid-19, which allowed Luka Modrić and Vinícius Júnior to come into the team. What was more puzzling were two other decisions as Zidane rested Toni Kroos and Ferland Mendy to bring in Isco and Marcelo, both of whom had disappointing evenings.

Valencia going down the left

The vast majority of Valencia attacks came with runs down their left flank. These were designed to create problems for Lucas Vázquez, filling in for the injured Dani Carvajal in an injury crisis which has also seen second choice Álvaro Odriozola and third choice Nacho Fernández ruled out. Vázquez has been consistent but has had defensive struggles and it was clear that Gracia had instructed his team to focus on this flank in order to exploit the Real Madrid defence. Equally, as became evident as the tie unfolded, Zidane’s set-up did not offer great protection for the defender, primarily because of the way they looked to cover their own left side.

As can be seen in the below image, Real Madrid were quite concerned by the risk of Marcelo bombing forwards and so would tend to drift towards the left and would otherwise avoid going too wide. This mean that spaces opened up on Valencia’s right, with Denis Cheryshev and Gaya able to get forwards as an overlapping duo into the spaces in behind. A quick switch across the field would put these two players into a significant space to attack the Real Madrid backline. It was through this approach that Valencia would go on to win their first penalty of the tie, finding space on the left to get down to the touchline and deliver a cross which was handled by Vázquez in the box.

The approach was effective as Vázquez had little cover initially. Without Casemiro dropping into the backline, Varane was not so far over to the right when in the defensive phase, while Modrić was unable to provide the legwork tracking the overlapping run and Marco Asensio failed to put in the defensive shift required. Cheryshev and Gaya proved to be lethal and Zidane had to react.

Quick switches to the right

Real Madrid looked to learn from this and tried to reduce the impact. They sat deeper back in defence, shifting more central and over to the right to provide more defensive cover on that side of the pitch. As such, we saw a less symmetrical shape in which the three man midfield became more like a pivot system, with Fede Valverde deeper than a double pivot with Valverde alongside Modrić with Isco ahead of them. It was a change designed to add more defensive stability.

Valencia were quick to counter this though. Marcelo had become more defensively disciplined, in a way reversing the defensive commitment which was evident in the first half. Instead, he would drift more central, with the rest of the defence moving over to the right. The challenge with this came in that Valencia cottoned on quickly, with Maxi Gómez and Yunus Musah looking to capitalise on it and isolate Marcelo. This was what eventually led to Valencia’s second penalty. Gómez pulled off Sergio Ramos in the middle of the box, leaving Marcelo without midfield cover as they had moved to the right, leaving him with a dilemma of tracking Gómez or cutting off Musah’s far post run. This decision meant he did neither and was forced to dive in and trip Gómez.

Boosted by Musah’s pace down the right and knowing that Vinícius would not track back as much as would be required to limit this threat, Valencia could catch Real Madrid dangerously on the counter. With threats now coming down both flanks, the Real Madrid defence became incredibly stretched with spaces opening up between the positions in the backline and without the protection of Casemiro to drop in and fill the gap. Casemiro’s absence was sorely felt and Valencia looked to take advantage with a superb strategy which was very well implemented.

The breakdown in attack

It was not just defensively where Real Madrid let themselves down though. In attack, it was an inability to hold the ball up or to generate chances that would ultimately cost them. With just 1.06 xG, it was the lowest figure recorded since the opening La Liga game of the season against Real Sociedad. This came through a lack of central movement in a game in which Isco started with the sole aim of getting in between the midfield and defensive lines with runs and a floating role behind Benzema. However, the below example shows just how much space could open up between the defensive blocks but was not exploited. Instead, Isco would drift wide into already turgid wide areas where Benzema had drifted wide with Vinícius and the overlapping Marcelo. As such, Asensio became isolated on the right and there was no connection.

However, it would be unfair to look solely at the midfield and the runners. Much of this was to do with the movement of the front three, as is better reflected in the following image. Vinícius and Asensio stuck to very wide positions, not making runs inside to a more congested central area which was well defended by two rigid blocks of Valencia players. Without any energetic runs coming through from midfield, it left Benzema with no choice but to drop very deep in order to provide the link between midfield and attack himself.

The Frenchman had become isolated waiting on the shoulder of the last man and so would look to drop in front of the midfield line in order to provide some connection. The issue here came in that he could not turn into eight men in two defensive blocks, and there was little other movements in and around him to move into the space that he had left behind. This was, in large part, a credit to the Valencia defence, who retained their shape rather than tracking the man and consequently denied any spaces opening up.

The introduction of Mariano Díaz did little to change the situation as Benzema was injured, instead playing more on the last shoulder but leading to a disconnect. As it later emerged that Valverde played a period of the game with a fractured shin, we can perhaps understand why his energetic runs from midfield were more limited. Even before that injury, he held off with Isco already ahead of him in that role. The problem with such an approach is that Isco’s energy and movement was more akin to a retired footballer than an elite one.

Through this analysis, we can see how the absence of Casemiro was a major factor in the breakdown of the Real Madrid defence. Doing so with Vázquez on the right of defence and then selecting Marcelo ahead of the more reliable Mendy was simply self-sabotage. Without attacking players who would put in the defensive work required, Valencia found it easy to outnumber and isolate Real Madrid defenders. This led to a more stretched Real Madrid defence which invited errors, such as three penalties and an own goal.

At the other end, the connection between midfield and attack was non-existent. The way in which Valencia were pinning back Real Madrid’s midfield to provide a level of cover for a leaky defence meant that Isco was carrying the offensive responsibilities on his shoulders and struggled to provide this link alone. With Benzema dropping to help, it left the team without a talisman in attack. With insufficient movement from the wide areas too, it was a catalogue of errors which Zidane was too slow to react to.

Zidane is rarely outsmarted in terms of tactical set-ups, but this was most certainly one of those occasions. Gracia reacted more intelligently to the absence of Casemiro and set his team up to exploit Real Madrid’s weaknesses, while Zidane’s team selection invited more pressure on to the side and he was then slow to make the required changes to stabilise the tie. In this case, while VAR may have had a lot to say about the win, the real victor is Valencia coach Gracia.