Millwall were one of the Championship’s surprise packages last season. The Lions finished in eighth place and only missed out on the play-offs by two points. Manager Gary Rowett took charge of Millwall back in October, succeeding club legend Neil Harris, who resigned after a poor start to the season. He had big boots to fill, but nobody can question the job he’s done at the Den so far. They were a team who hovered dangerously above the relegation zone, but Rowett has transformed them into a side who can harbour realistic ambitions of gate-crashing the top six next season.

But if they’re to realise that dream, they need to start finding the net more often. Rowett turned them into a sturdy defensive unit, but they only hit 57 goals last term: the lowest number in the top half and on par with bottom side Hull City. Interestingly, the Millwall boss has turned to young Tottenham striker Troy Parrott to try and resolve those problems. The 18-year-old Irishman has joined the Championship side on a season-long loan.

This scout report will provide a tactical analysis on Parrott’s game, and will give Millwall fans an indication of what to expect from the highly-rated youngster.

Plenty of football fans will have heard about Parrott, but not many will have seen him play live much – if at all. Understandably, he’s not played much senior football yet. Parrott made four appearances across all three domestic competitions for Spurs last season. But a look at his goal record reveals why he’s so highly-rated at Tottenham. In 2018/19, the Irishman scored 14 goals in nine Under-18 Premier League games, and last season he scored three goals in two games for Tottenham’s Under-23s. In Spurs’ last two UEFA Youth League campaigns, he’s registered a total of nine strikes in as many games.

Parrott may be lethal in the penalty area, but that doesn’t mean he offers nothing outside of the 18-yard box. His heat map below shows his tendency to pop up in different areas of the pitch for his team, which demonstrates his impressive work rate. 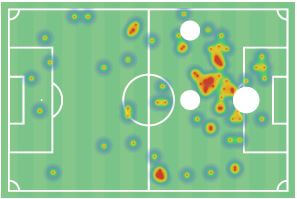 This heat map is very scarce, which is due to the lack of games Parrott has played in which we have advanced data. However, it still provides a snapshot into his work rate, which we’ll explore in more detail later in the analysis.

In terms of stature, Parrott stands at just over six feet. He’s a good all-round striker who utilises clever movement in and around the area to pull defenders out of position.

How he scores his goals

First and foremost, the Dublin-born hitman is lethal inside the area. He’s scored nine goals over the past calendar year, from 5.31 expected (xG). Of course, when looking at statistics around Parrott’s game, it’s vital to keep in mind that we’re judging him from a small sample size. The real challenge for the Irishman will be replicating those figures over a 46 game Championship campaign. But the signs are very promising.

Below is a graphic of where Parrott’s goals in the last calendar year come from. 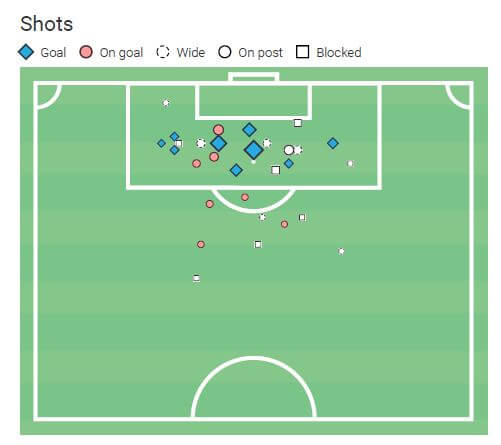 As you can see, they all came from inside the area, and the vast majority of his goals were scored from the left of centre. Parrott enjoys cutting in from the left onto his stronger right foot, opening his body and trying to pick out the right side of the goal. He does this effectively in the images below, whilst representing his country at Under-21 level. Parrott has got in behind the Sweden defence in transition, and he beautifully opens his body up and sidefoots the ball into the bottom right corner from the left side of the goal. 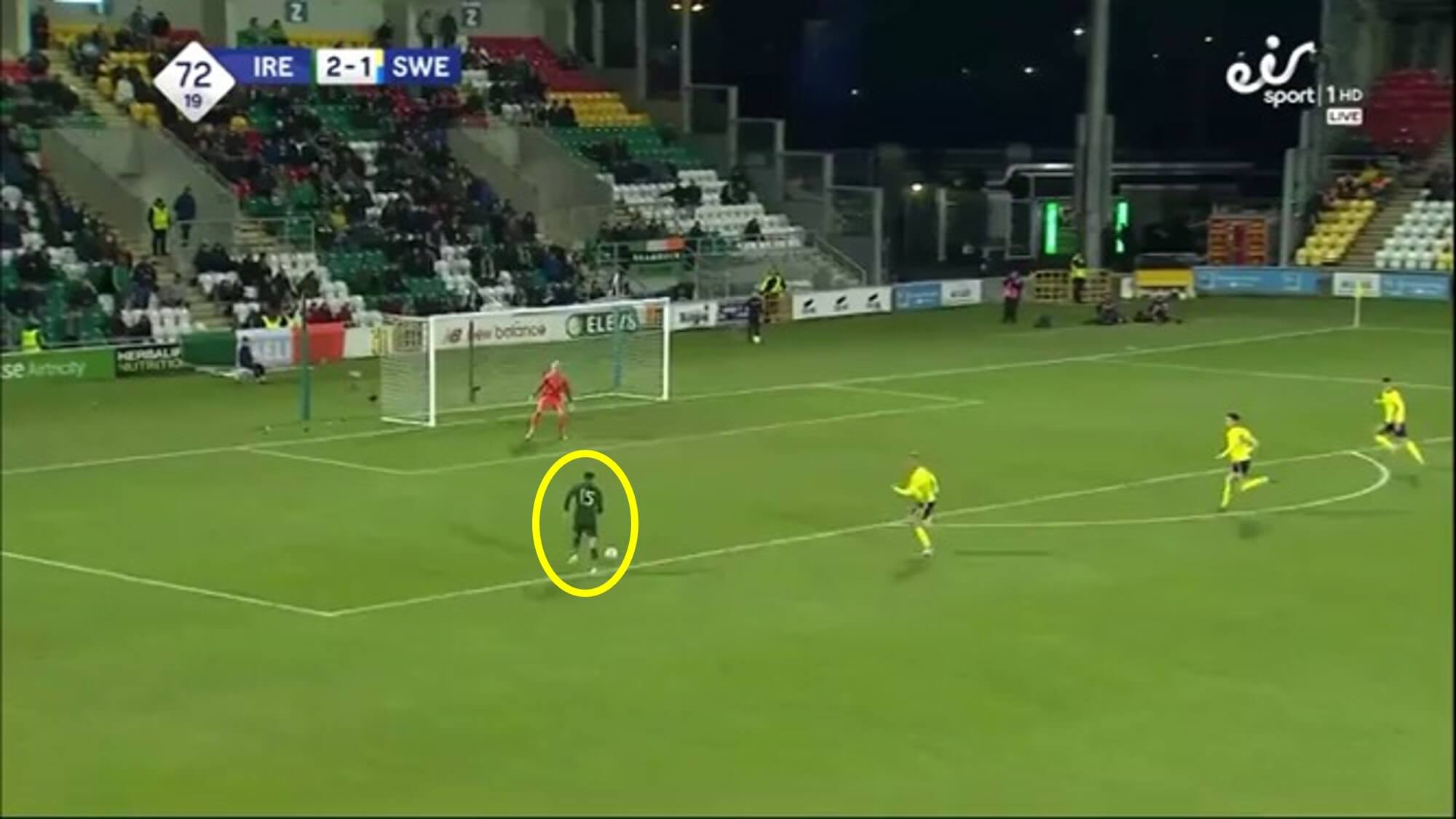 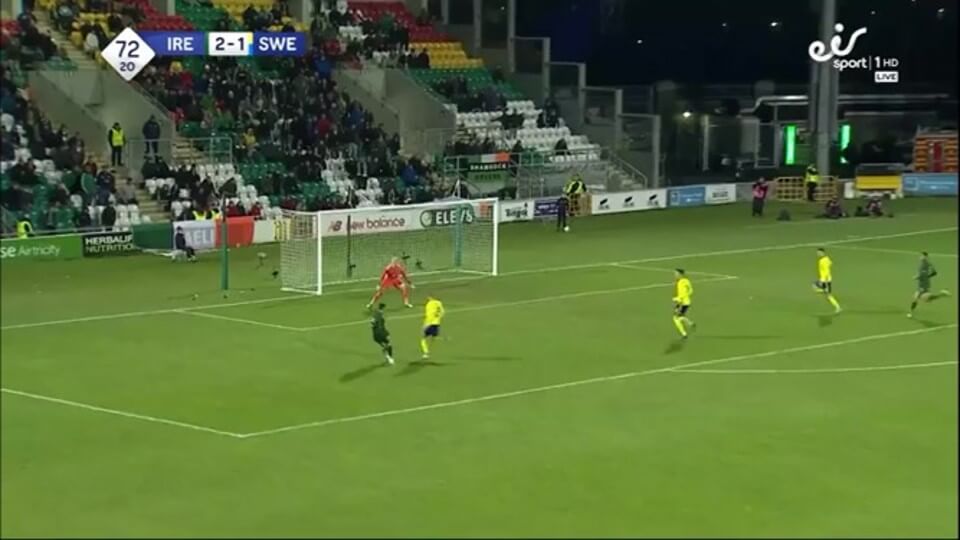 The youngster is also capable of using a bit of trickery to create a few yards of space for himself amongst a crowd of opposition defenders. In the image below, he’s surrounded by three Sweden players. 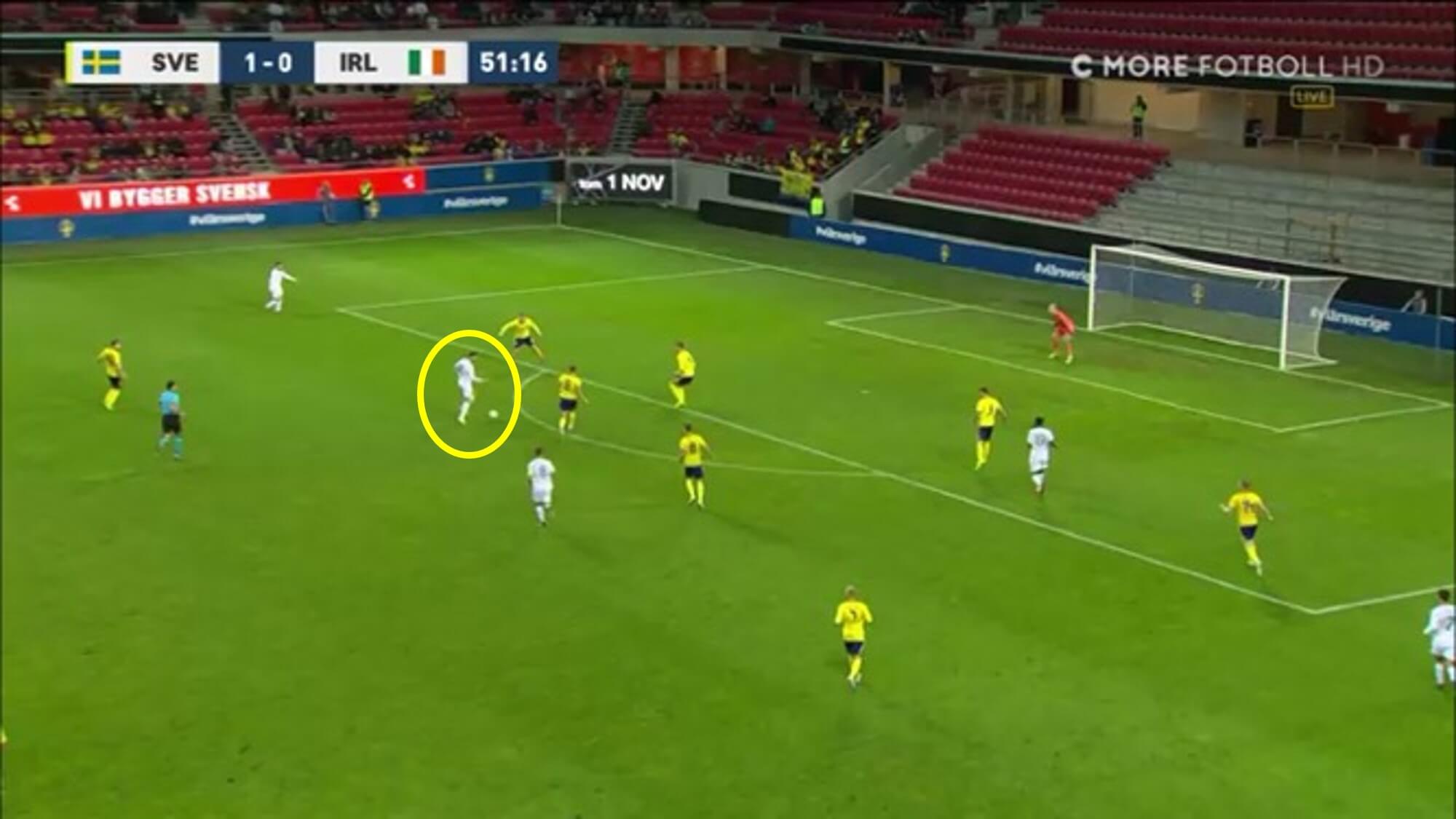 But he manages to create that vital yard of space by dropping his left shoulder, which made the opposition players think he was going to touch the ball onto his left foot. 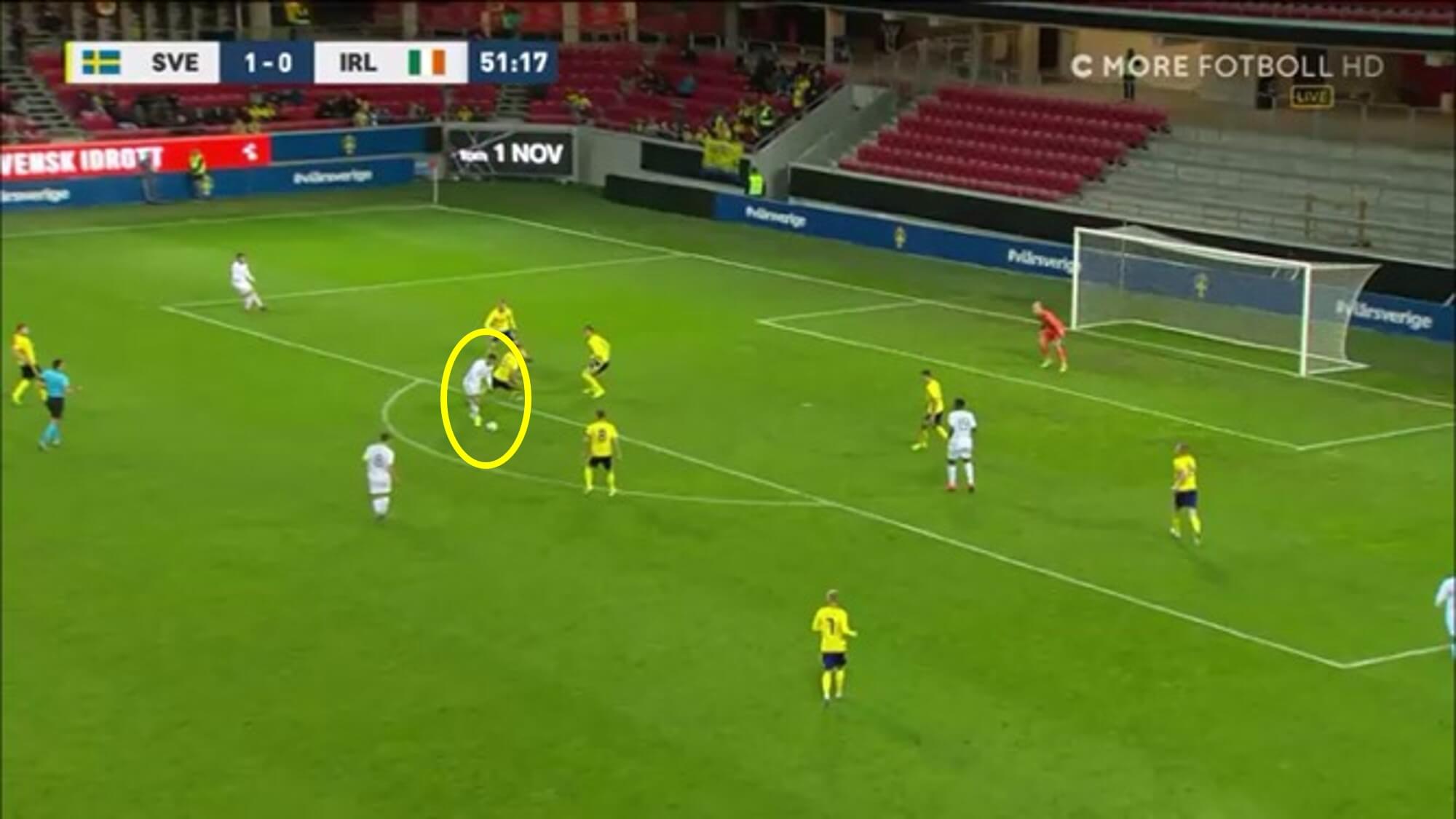 As you can see in the above image, Parrott has worked the ball onto his right foot, and he’s going to try and curl it into the corner with the instep of his foot. The defenders can’t change direction quickly enough, which means he’s got time and space to get a shot off. He hits a decent effort which the goalkeeper saves.

The young Irishman is also capable of finishing more instinctively. In the image below, the ball has fallen to him in the area. 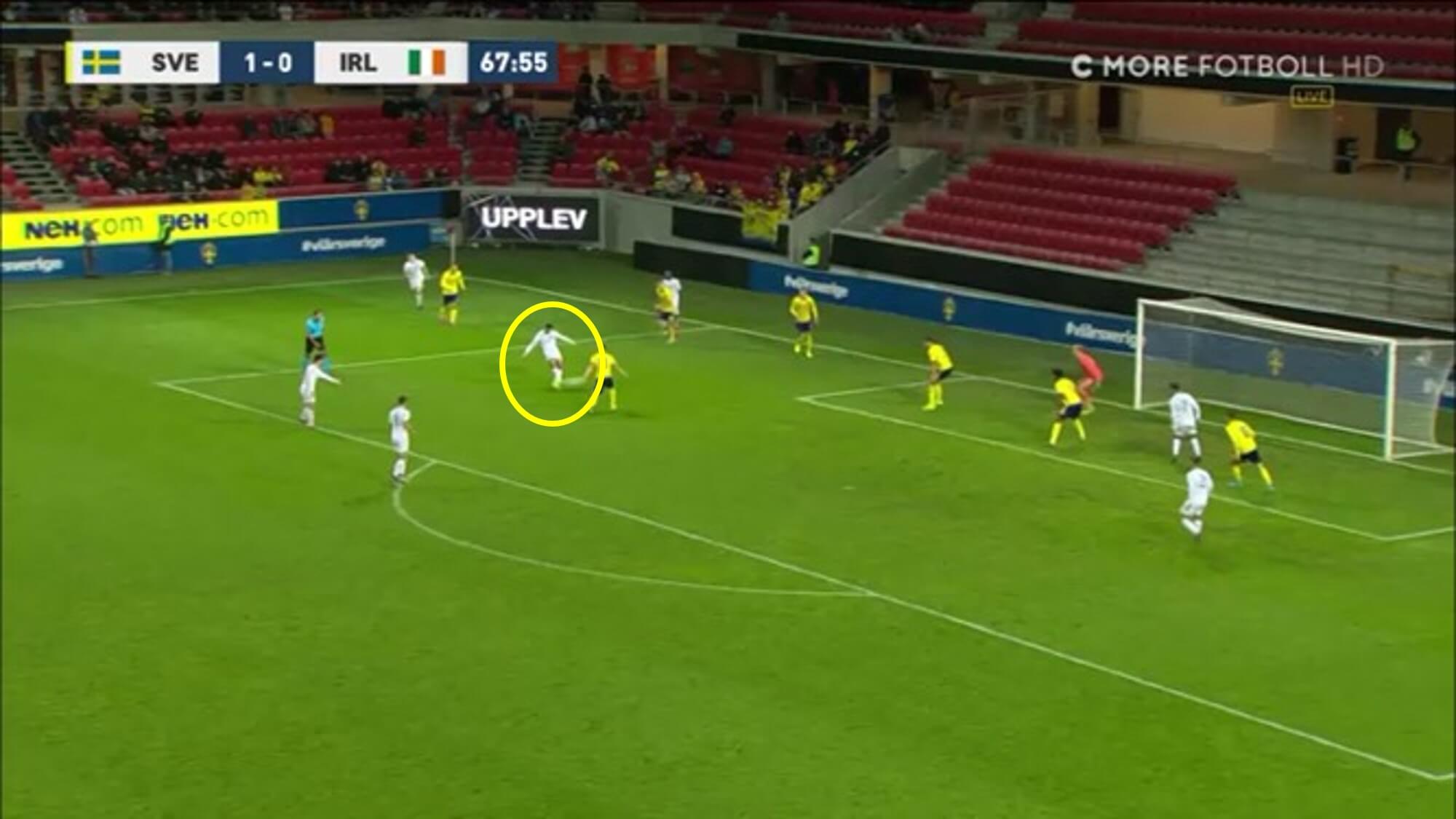 This time, he hits the ball first time. He uses a very similar technique, opening the body up and aiming to sidefoot the ball into the far corner, but he had very little time to think about what he was going to do. That didn’t phase him though. He quickly got his body into the right position and bent the ball into the top right corner. He showed maturity beyond his years by calmly taking it on first time, not snatching at the opportunity, focusing on his technique.

One of Parrott’s main attributes is his excellent off-the-ball movement. He shows his all-round ability by mixing up his game. The Irishman is capable of dropping between the lines of the opposing defence and attack to disorganise the opposition’s defence and link play, but he’s also excellent at timing his runs in behind the defensive lines. In offensive transitions, Parrott usually looks to run in behind the opposition’s defensive line.

The images below are a perfect example of how the youngster times and bends his runs to stay onside, whilst evading the attention of central defenders. 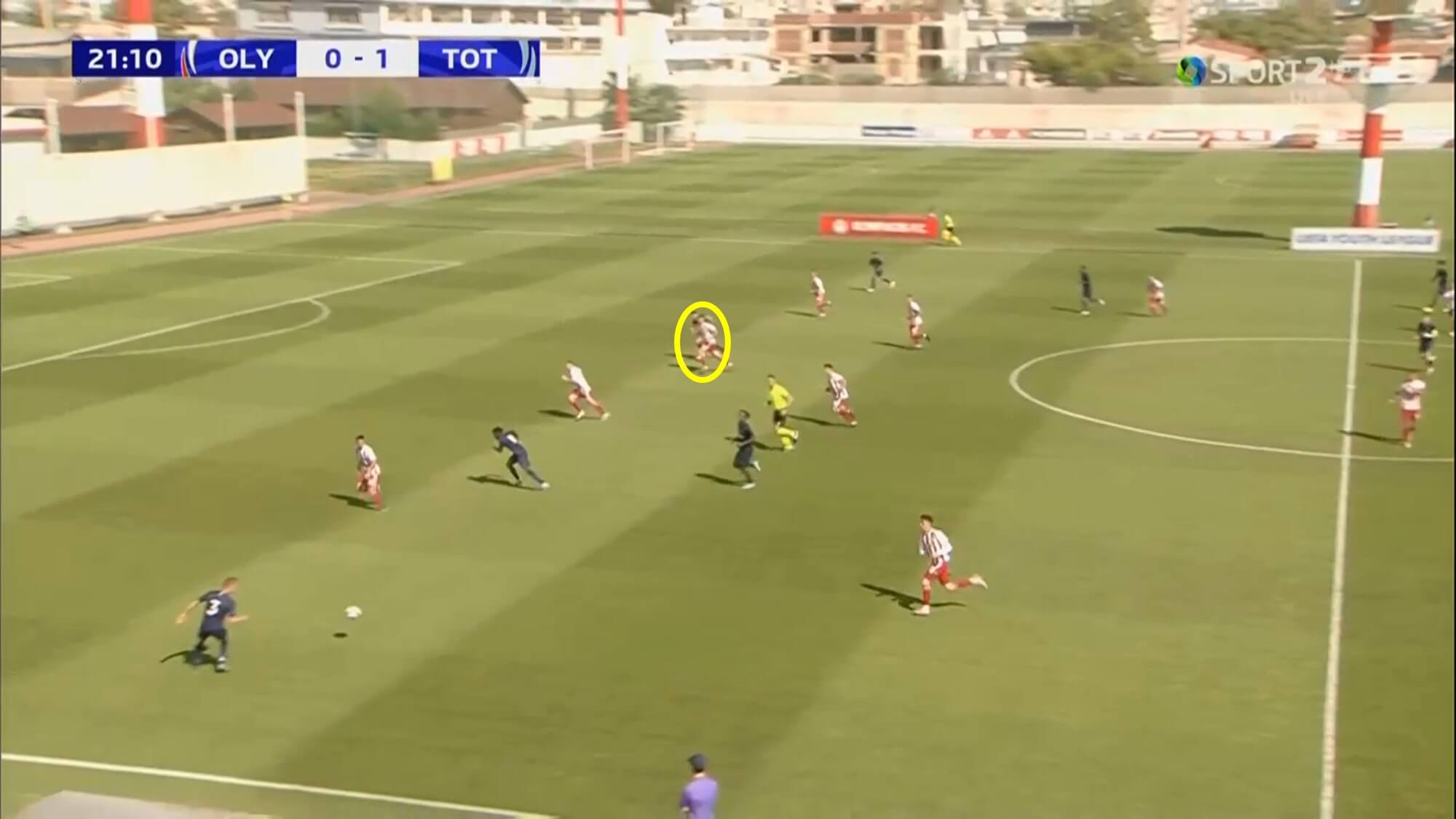 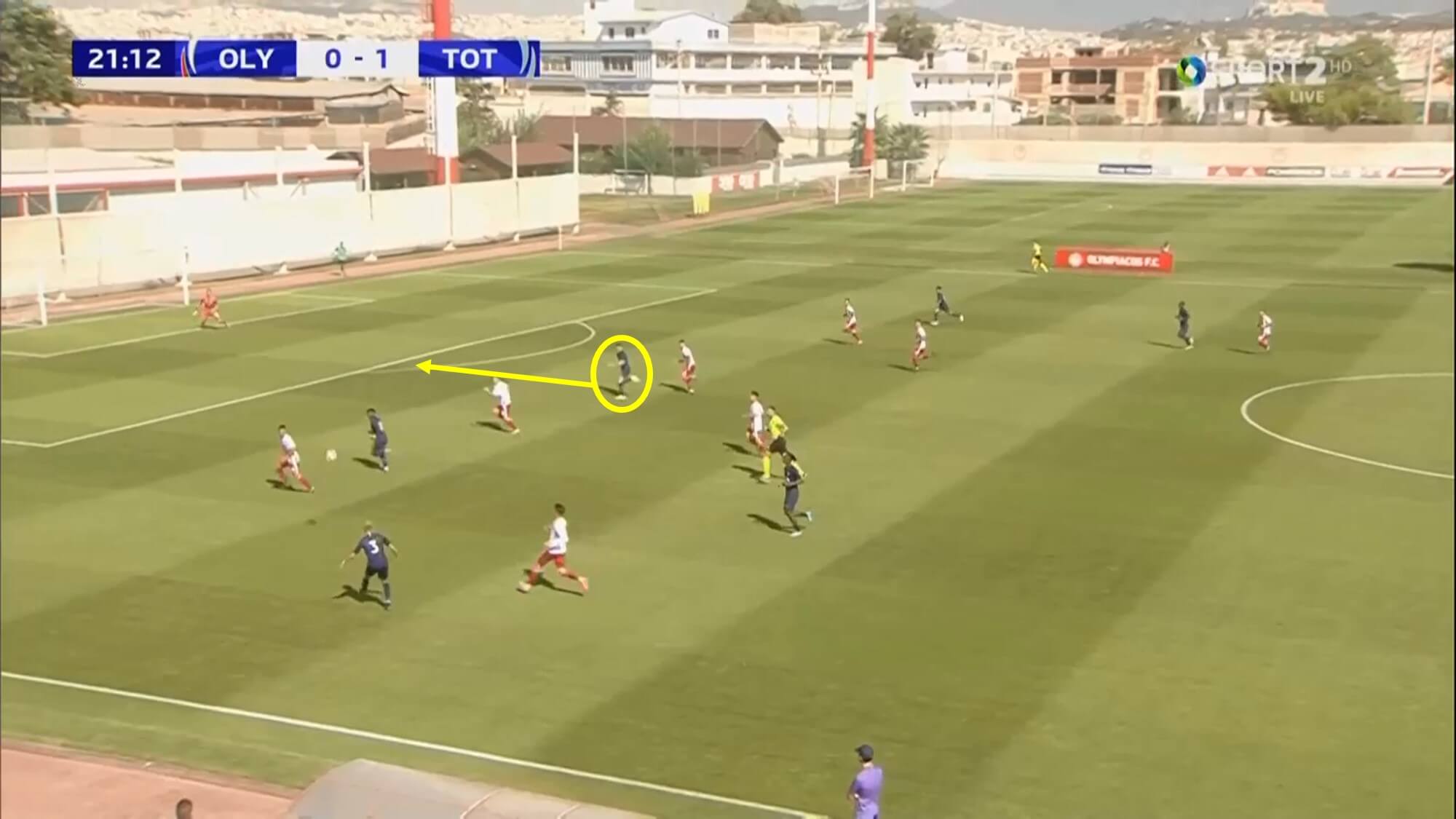 During positional attacks, Parrott will look to actively play a part in the build-up. He’ll often start by staying on the shoulder of the last defender, looking to pin back the defensive line. Then, he’ll drop a bit deeper, between the lines of the opposition’s defence and midfield. As the defensive line has been pinned back by the threat of him running in behind, the opposition aren’t as compact, and there’s more space for him to play in that area. Therefore, he’s able to be an option for a midfielder to play a simple, line-breaking pass into his feet. It also gives the defenders a decisional problem. If they go to press Parrott, they risk leaving space in the defensive line for a Spurs player to exploit. But if they stay put, then the striker is given more time to pick out a dangerous pass.

This is what happens in the next example.

An area where Parrott will be tested a lot more next season will be his physical capabilities. Playing against senior Championship defenders will be a big step up from going head-to-head with defenders at youth level who, like Parrott, won’t be fully developed physically yet. The pace of the game in the Championship will also be a lot higher. Youth games at the elite level are renowned for being extremely technical, with most teams looking to progress the ball by playing short passes through the thirds. But in the Championship, this isn’t always possible due to the intensity of the games. Therefore, he’ll certainly have to deal with more direct balls than he’s used to, and he’ll be required to hold off defenders and wait for his Millwall teammates to get up the field and support him.

It’s not just about upper body strength though: it’s also about how you use your body. Parrott did come a little bit unstuck in this next example, again from Tottenham’s UEFA Youth League clash with Olympiakos. 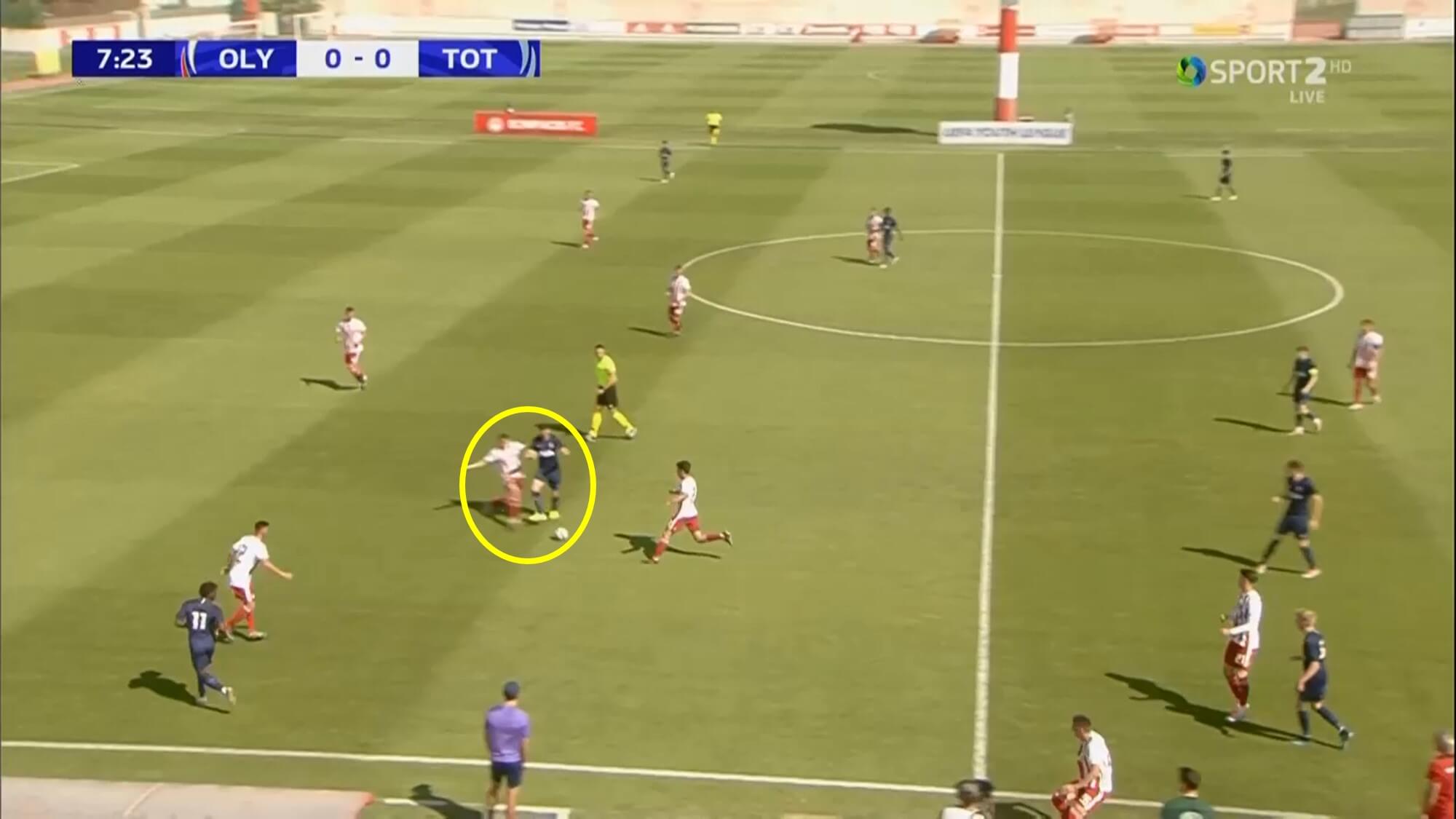 As you can see, he’s about to receive the ball with his back to the defender. On this occasion, he needs to put his body between the ball and his man, so that, if the defender was going to win the ball back, he’d have to foul Parrott. Instead, he shows too much of the ball to the centre-back, and he cleanly wins the tackle. Being able to effectively hold the ball up with his back to goal will be pivotal for the youngster. He’s not necessarily bad at it, particularly for his age, but he’ll be aiming to improve that small detail of his game so he’s able to hold off more physical defenders.

Parrott’s work rate out of possession is also very impressive. Even when playing as a lone striker, the sight of him running back into his own third to force a turnover is fairly common. That’s exactly what he does in the image below. 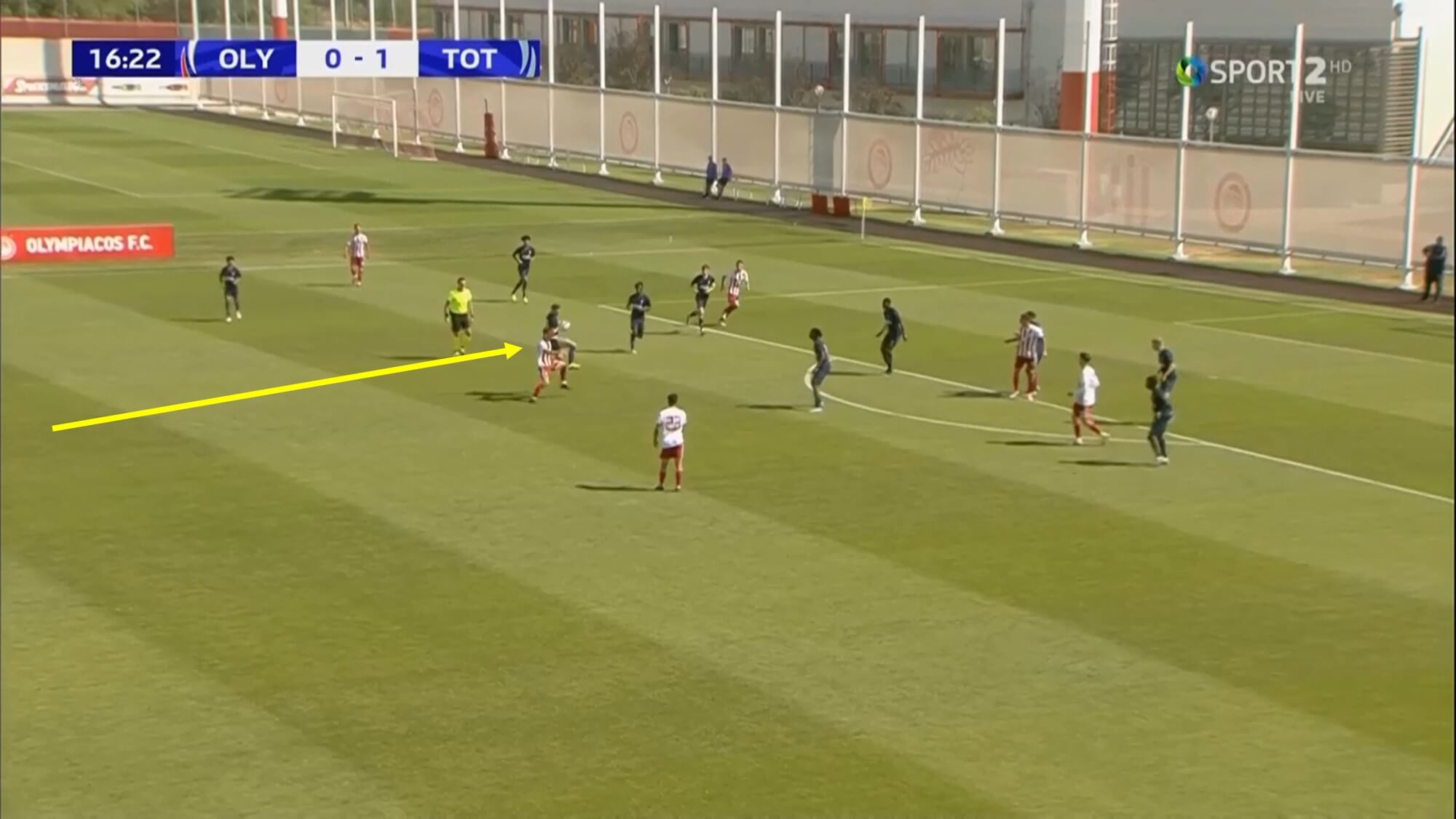 His tendency to quickly pop up in these areas can catch opponents by surprise, and lead to Spurs starting a counter-attack.

Whilst Parrott’s on-field work rate can’t be questioned, his intelligence whilst pressing could improve, and exposure to senior football will certainly help him do that. In the example below, he gets caught out because he approaches a defender from the wrong angle. 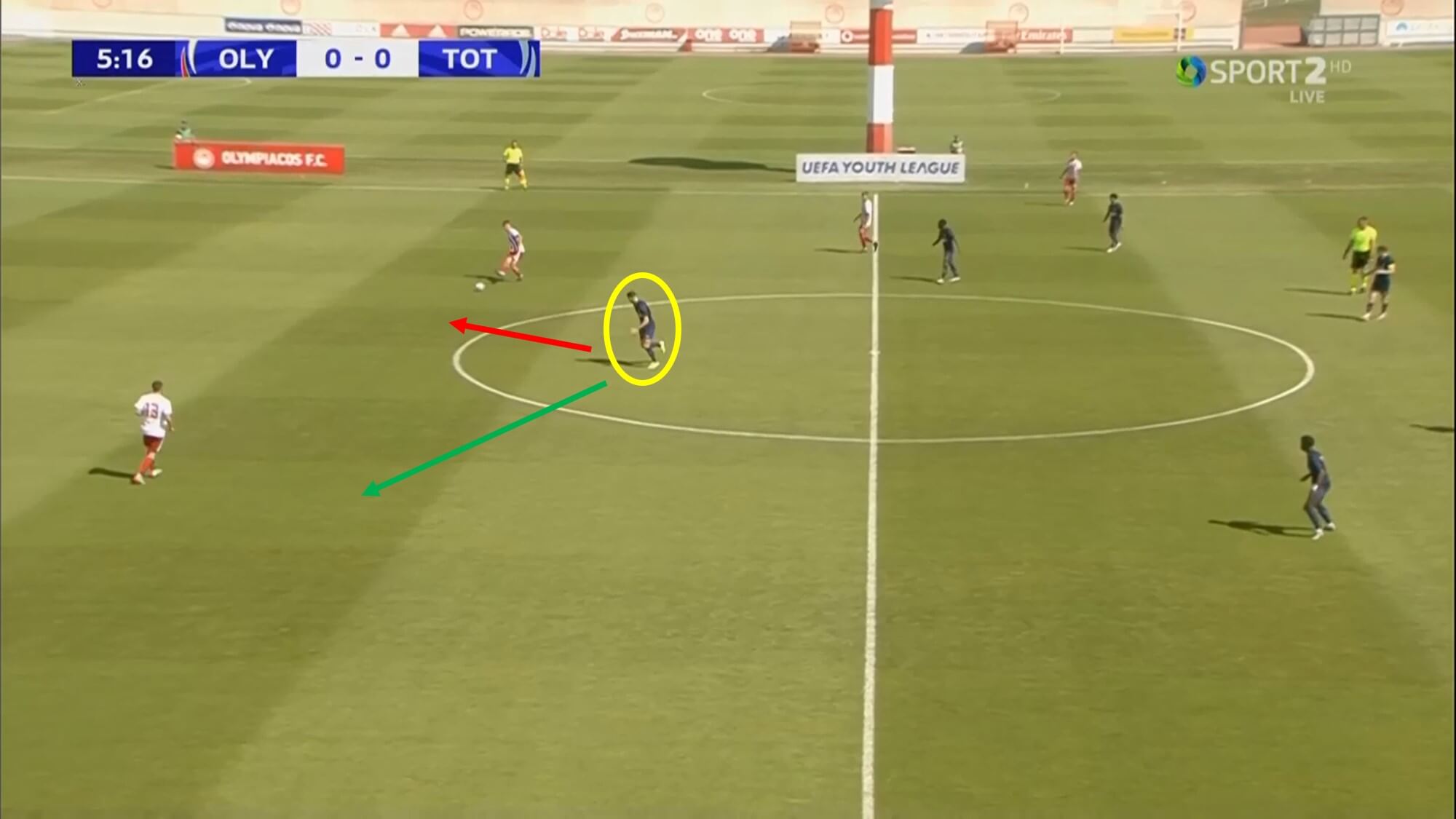 The red arrow represents the movement that he actually made, and the green arrow represents the movement he should have made. Instead of approaching the defender from a more central position, Parrott tries to intercept the pass, which leads to him having to approach the defender sideways on. Therefore, he’s not able to cover the central space, and the defender is free to take the ball into that area of the pitch, taking Parrott out of the game. Parrott would have been better off playing it safe and making it a priority to stop ball progression through the centre because Tottenham’s midfield were much deeper than him. 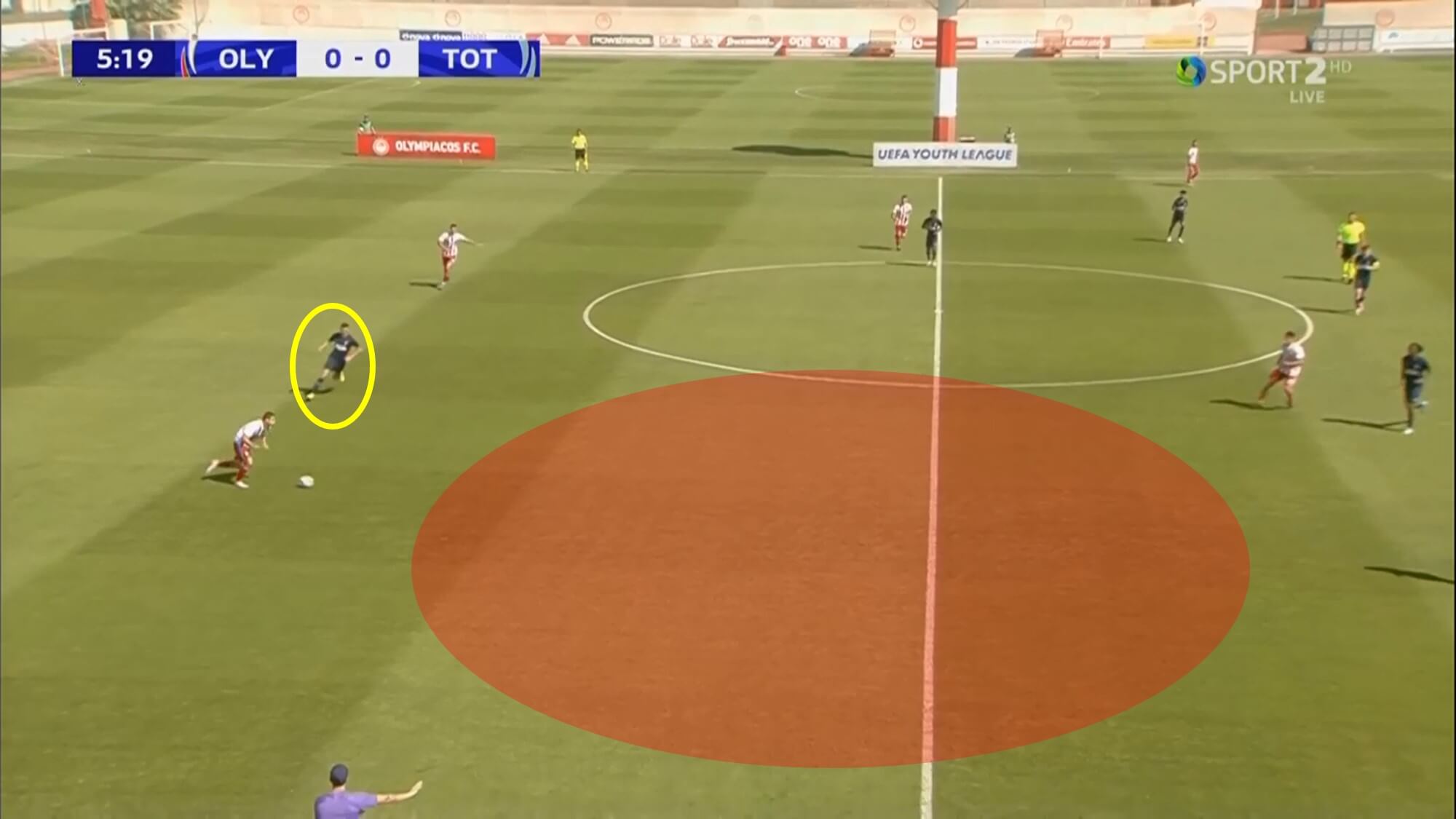 This move is an exciting one for Spurs, Millwall, and Parrott. He’ll get his first real opportunity to test himself in senior football, and he’s certainly got the talent to make a second-tier loan spell work. In previous seasons, we’ve seen Liverpool striker Rhian Brewster and Chelsea’s Tammy Abraham learn their trade with successful loan spells in the Championship, and Parrott will be hoping that he can follow in their footsteps. Millwall tended to play with one striker last season, so it’ll be interesting to see whether he plays as a lone striker, or if Gary Rowett decides to change his tactics to accommodate a front two.