Red Bull Salzburg were once again crowned champions of the Austrian Bundesliga. They dominated all season, losing only two games. In 32 games, they managed to score 110 goals and concede just 34. Their incredible defence was down to not just their defence, but their goalkeeper as well. Cican Stankovic has had to wait for the number one shirt at Salzburg, but he is certainly impressing now.

This tactical analysis will focus on the Austrian and how he has been instrumental in his team’s success this season. We will focus on the fundamentals that are expected of a modern-day goalkeeper, and see how he compares to other keepers outside the top five leagues.

Because Stanković plays for one of the best defences in the Austrian Bundesliga, he doesn’t face many shots. In fact, he only faces 2.97 shots per 90, conceding 0.98 goals. However, when the Austrian is called upon, he’s often equal to the shots on his goal.

Stanković has a fairly average save percentage of 67.06%. Because he faces a limited amount of shots, whenever he fails to save a shot, it has a bigger impact on his save percentage. He is certainly one of the best shot-stoppers in the league.

His shot-stopping is excellent no matter where the shot is taken from. In the example above, the shot is taken from a fair distance. Although Stanković is only 6’1”, fairly short for a goalkeeper, his footwork allows him to save difficult shots. Here, he is able to save a powerful strike that is destined for the bottom corner because his footwork allows him to get down quickly.

His footwork helps him save shots from distance whilst his reflexes helps him stop shots closer to his goal.

In this example, against Strum Graz, he makes an incredible double stop using his reactions. The opposition look certain to score, but Stanković’s reflexes and ability to save shots with his legs allows him to block the initial shot. The second shot is more about his ability to spread his body, however, his initial reaction to close down the shot is exceptional. His arms are spread to either side of his body to make himself a bigger target for the ball to hit. He dives towards the ball meaning the attacker has almost none of the goal to aim at. 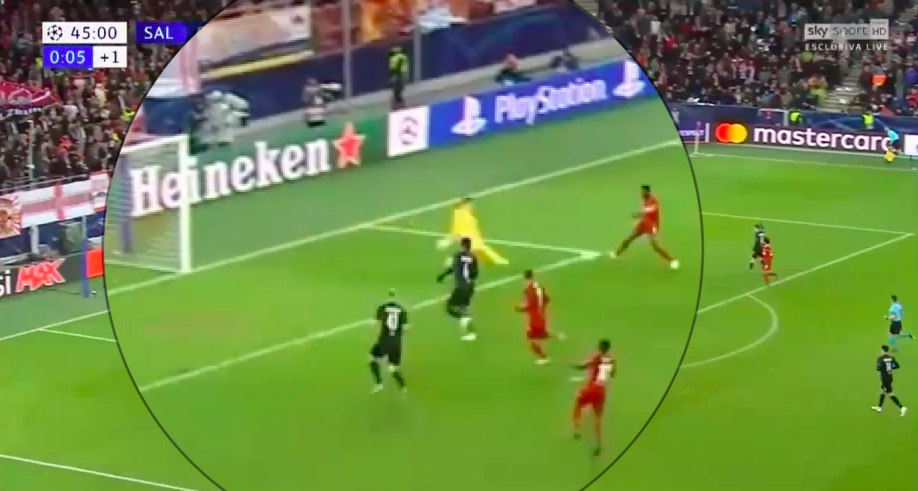 In the above example, we see Stanković proving himself against the best. Not only has he been a revelation in the Austrian Bundesliga this season, but he’s also impressed in the Champions League and Europa League. He knows when to use the correct techniques in one-on-one situations. Stanković waits until Liverpool’s Sadio Mané takes his final touch before rushing out, any earlier and the Liverpool man could chip him. He spreads himself and saves the shot with his big frame.

Having the experience to know what to do in different one-on-one situations is a huge advantage for a goalkeeper. Below is a different scenario.

In this case, Stanković knows that if Mohammed Salah gets the ball then he will likely score, therefore, he needs to get to the ball first. We can see that as soon as the ball splits the defensive line, the Austrian knows he has to beat Salah to the ball. His pace and anticipation allows him to get a hand to the ball, preventing Salah with an easy chance.

Stanković has an average xG difference value of -0.11, meaning he has conceded more goals than he was expected to. With the chances he faced he was expected to concede 25.02 goals, but he conceded 28, giving him a difference of -2.08. But because he doesn’t concede many chances, when he concedes a goal, it has more of an effect on his stats. Meaning keepers that play for worse teams will often top the xG difference charts.

Salzburg dominate possession in the Austrian Bundesliga. They have the highest average possession of any team with 62.6%. Stanković is integral to this. In a previous data analysis of the best goalkeepers outside the top five leagues, Stanković impressed massively in terms of his passing. 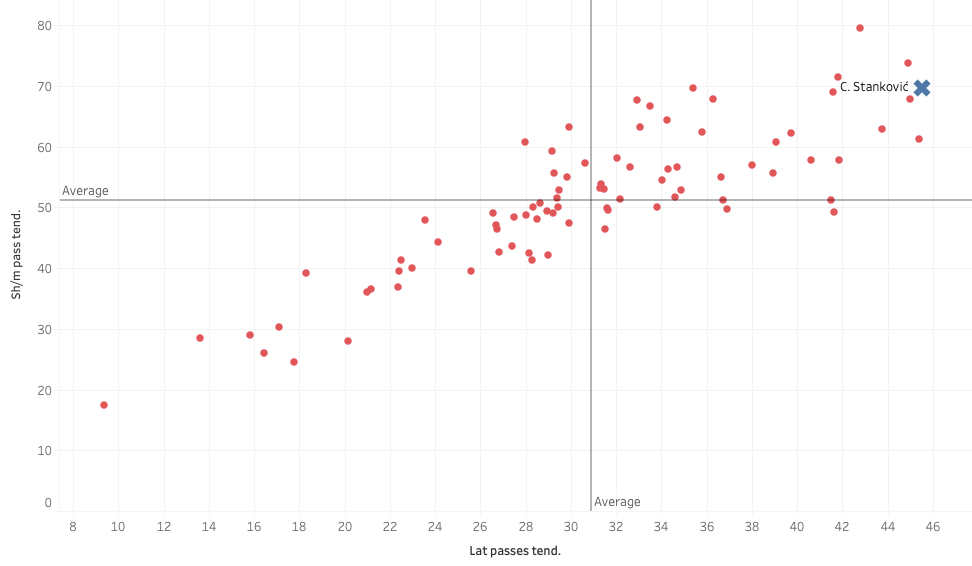 The above graph shows how much he impresses compared to goalkeepers outside Europe’s top five leagues. He has a lateral pass tendency of 45.53% and a short/medium pass tendency of 69.70%. He is a great asset to have as an option at the back. His stats show that he is very reliable. He has very similar stats to Rangers man Allan McGregor. 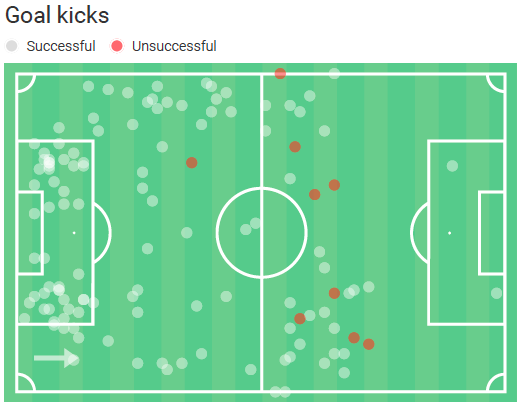 As we can see by the map above, Salzburg prefer to pass the ball short from goal kicks, this applies from open play too. However, when there isn’t a short option, Stanković is more than capable of finding teammates with a more medium pass. His chip pass technique is very effective, often to his full-backs.

In the above example, against Wolfsburg, his options are limited as the opposition strikers are marking his centre-backs. So the full-backs move high and wide to give him a chipped pass option. He plays an excellent pass to his teammates stronger foot, giving him a better chance of a first touch. Stanković completes 90.33%of his passes.

He does have a reluctance to go long, meaning these are often his weakness. He doesn’t pass well when under significant pressure. 50% of his long kicks are followed by a duel, meaning he struggles to find his teammates with longer passes.

Much like his shorter passing, his throws are very effective within this Salzburg team. Over the past year, he has completed 100% of his throws. Although many of these are often shorter, he does have a valuable ability to start counter-attacks from within his box. His xG Chain is the highest in the league (4.25), this means that his quick break throws often lead to good chances for his team.

Teams that like to dominate like Salzburg often play a high line to limited the space that their opponents have to work in. So having a goalkeeper that is confident at coming out of his box to recover possession when needed is important. 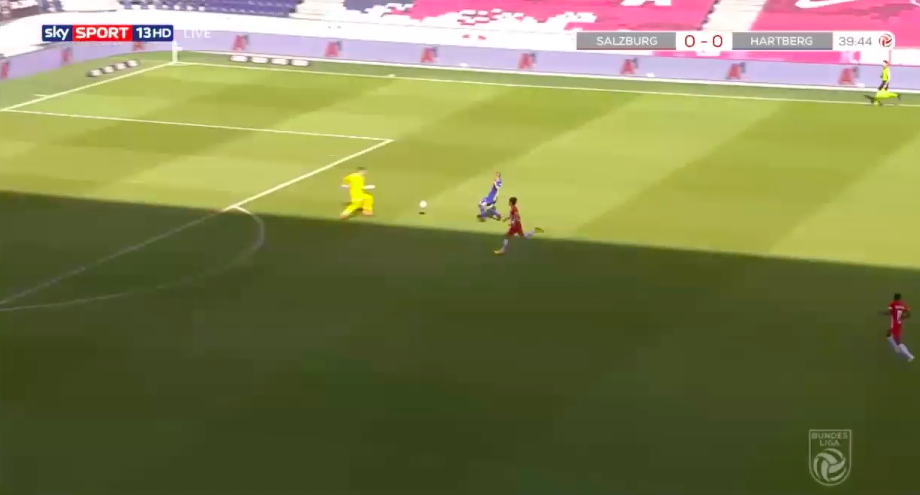 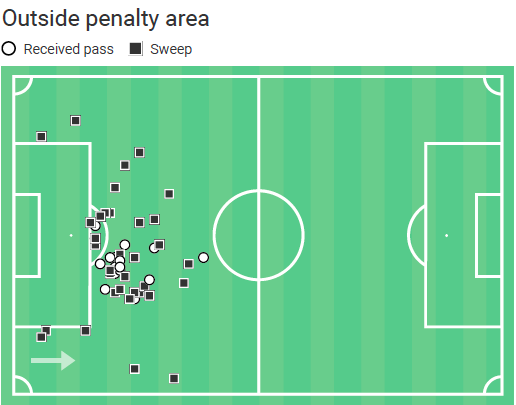 The 27-year-old has 2.49 sweeps per 90 and 4.21 possession adjusted interceptions. He is very good at choosing when to sweep up and when to stay in his box. As well as when to clear and when to find a teammate with a simple pass.

Knowing when to stay in your box and when to come out to prevent an opponent attacker from getting to the ball first is paramount to a team that dominates the league. For example, in the image below, if the LASK player gets to the ball first it’s a certain one-on-one opportunity. However, Stanković notices the danger and prevents the situation after clearing the ball into touch. 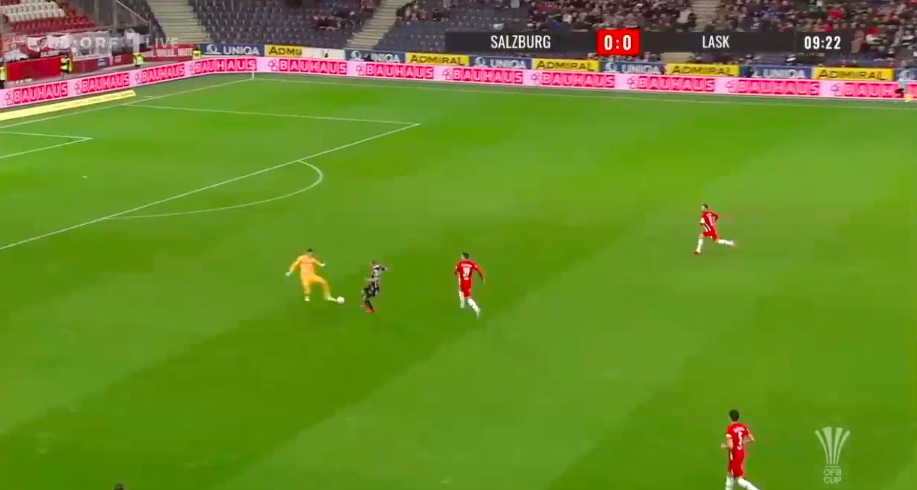 Stanković has a bad habit of palming away shots he should be catching. This can maximise the chance of the loose ball falling to an attacker, creating a goal-scoring chance.

In the image above, we can see how the Austrian saves it into the path of the opposition. Instead of saving it there, the keeper should palm the ball out for a corner. Not risk the chance of it falling to an attacker.