Finding the best goalkeepers in the Premier League – data analysis

Be it Manchester City’s Ederson, Liverpool’s Allison or Manchester United’s David de Gea, it must be said that the English Premier League is filled with exceptional goalkeepers. Every so often we see one of the top teams get shut out by inspiring shot-stopping performances of goalkeepers in the lower clubs who almost single-handedly earn points for their side. The opposite is also true, with goalkeeping blunders becoming the talk of the town. In this data analysis, we will look at the data and statistics of the goalkeepers in the Premier League to identify the best keepers from last season. Our analysis will look at the data and statistics of those goalkeepers who have played more than 600 minutes for their side. We should also note that the statistics of a goalkeeper will be affected by the defence in front of him and we should consider this as well. 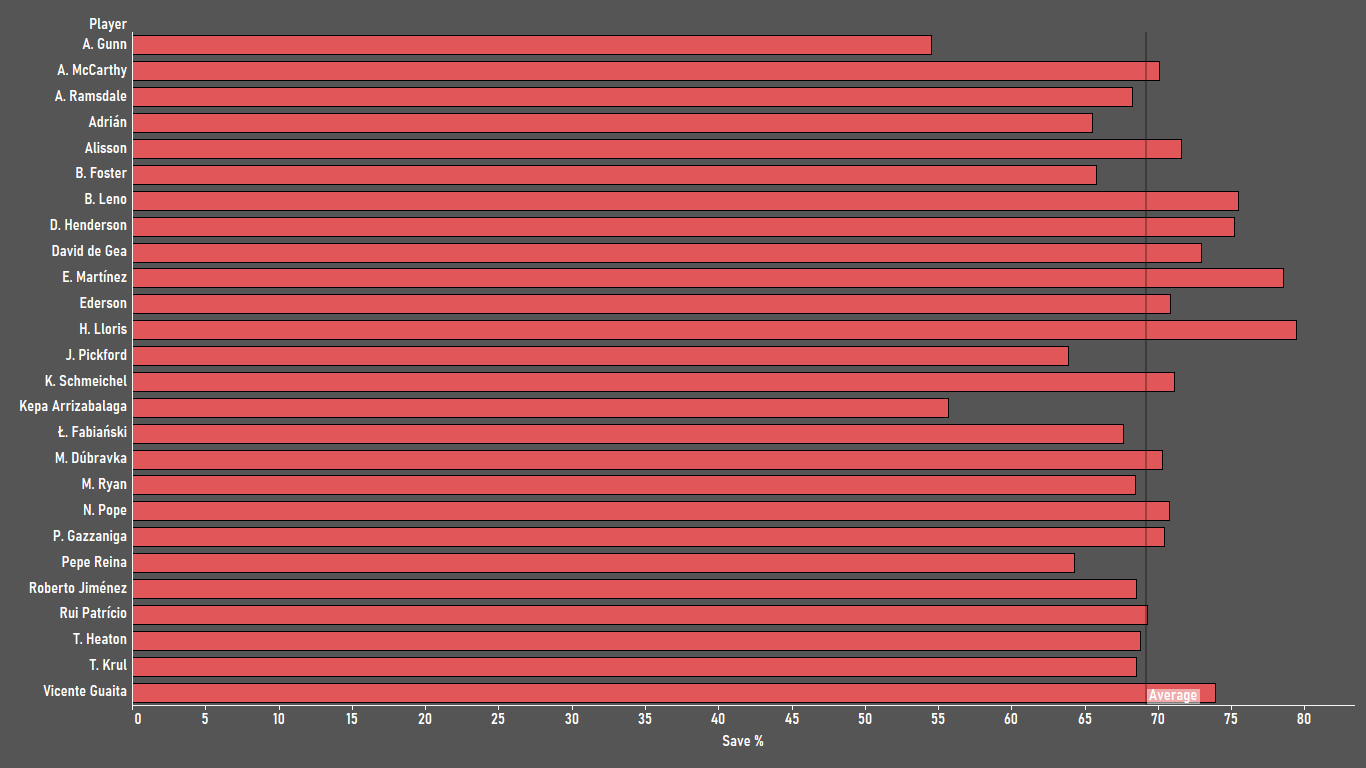 The obvious metric that we would look at is the save percentage of the goalkeeper. The data gives us an idea of the individual output of the keeper and minimises the effect of the defence ahead of him to a certain extent. A goalkeeper with a better defence could still face lesser, and possibly even easier, shots and this could result in a better save percentage as well. However, these statistics are still important in judging the goalkeeper’s performance.

Immediately we see that Tottenham’s Hugo Lloris tops the list with his save percentage of 79.41%. The French international’s quality is undoubted and he has been magnificent in a subpar Tottenham side despite an injury last season. The two Arsenal goalkeepers follow him, with Emiliano Martínez (78.57%) and Bernd Leno (75.47%) finishing second and third respectively. Leno’s injury meant that Martínez was called in and the Argentinian put in a series of impressive displays towards the end of the season. If his form continues, Mikel Arteta will surely have a selection headache at the back once the new season begins.

Apart from them, we see two keepers from clubs outside the ‘big six’. Sheffield United’s Dean Henderson (75.19%) has impressed everyone with his solid performances at the back and is already pushing for the starting spot in England’s Euro lineup in addition to putting the pressure on David de Gea (72.93%) at Manchester United although the latter does have a relatively good save percentage. The other goalkeeper is Crystal Palace’s Vicente Guaita with a 73.91% save percentage. Crystal Palace have not been as effective in attack this season and have relied on Guaita’s efforts to often shut out opponents in order to earn crucial points.

It is also interesting to see the likes of Ederson and Nick Pope, who challenged for the golden glove till the last matchday, feature just above average with 70.83% and 70.76% respectively while Kepa Arrizabalaga, the world’s most expensive goalkeeper, has the second-worst save percentage with 55.66%, ahead of Southampton’s Angus Gunn (54.55%). 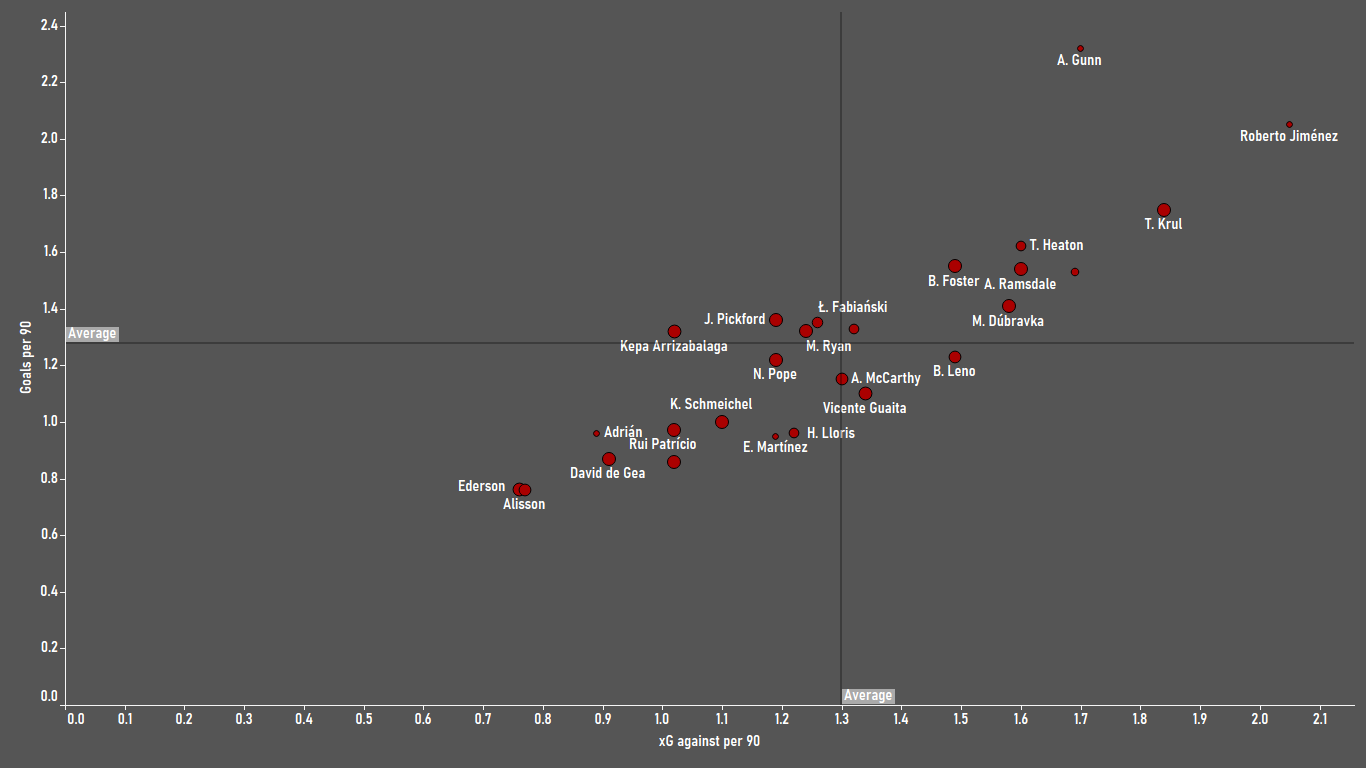 At the other end, we see the likes of Gunn, Tim Krul, Tom Heaton, Pepe Reina, Ben Foster and Aaron Ramsdale all concede at least 1.5 goals per 90. These keepers have been part of the bottom-ranked sides and these statistics highlight the defensive woes of their clubs. Apart from them, Martin Dúbravka has also conceded about 1.41 goals/90 and despite being praised for his good performances last season, finds himself towards the back end owing to his poor defence. The likes of Jordan Pickford and Arrizabalaga, who we usually expect good performances from, have also severely underperformed this season. 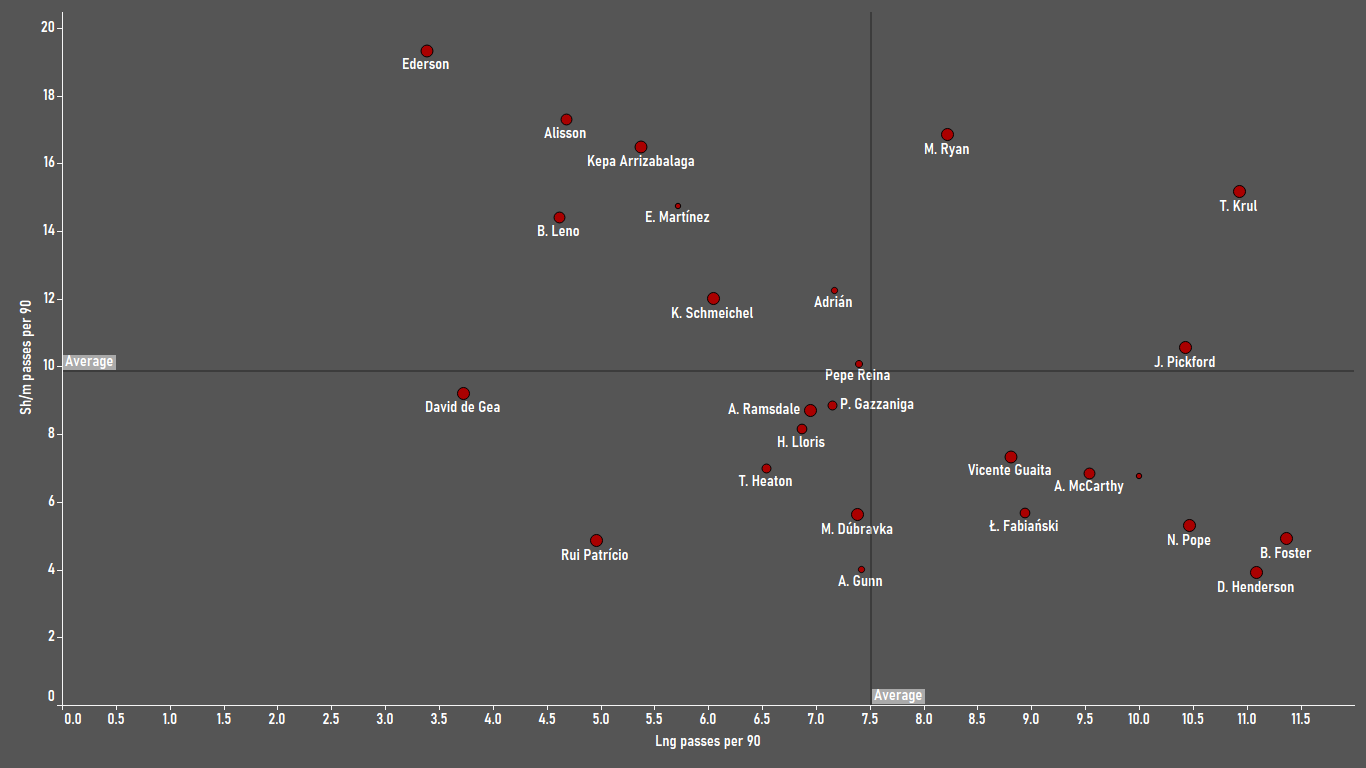 Another key part of a goalkeeper’s game is his passing. In this section of our data analysis, we will look at the preferred type of passes for each goalkeeper. It is obvious that these statistics will be affected by the style of play of their respective clubs as well and we should take that into consideration as well. Immediately we see Manchester City’s and Liverpool’s style of building up from the back with Ederson and Allison having the highest number of short and medium passes per 90. Arrizabalaga has similar statistics while Matt Ryan has above average statistics in both fields along with Pickford and Krul.

At the other end, we see Henderson, Foster and Pope feature highly and these are a testament to their teams playing out through the wings. Henderson’s Sheffield United especially makes use of their advancing wing-backs and the Englishman’s distribution to them is key to their build-up play. Henderson’s accuracy is also one of the highest of those that usually play long passes at 65.19%. 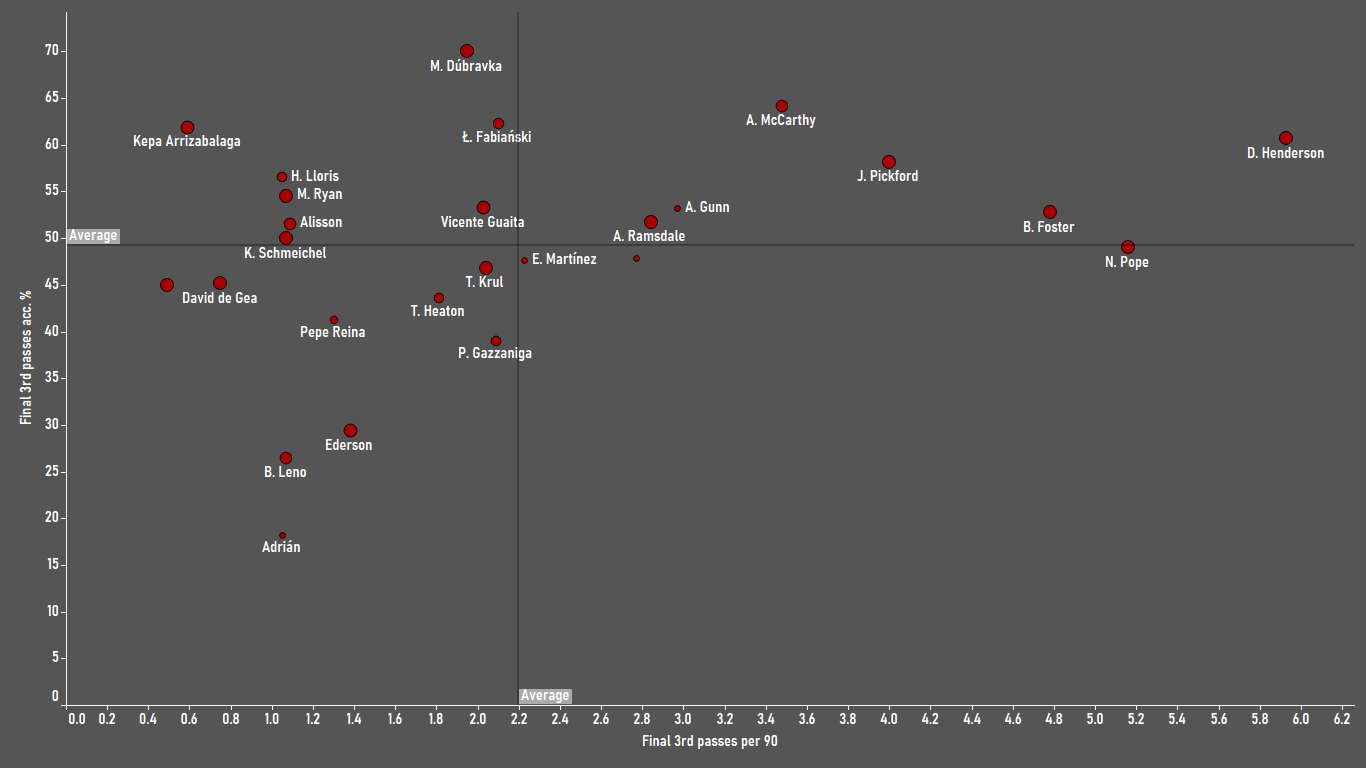 Another aspect that we will look at is the final third passing. While goalkeepers are not expected to regularly launch balls into the final third, the statistics do make for interesting reading. Henderson is far ahead of the rest with his 5.93 final third passes per 90 and an above-average success rate of 60.7%. Pope, Foster and Pickford follow him although Pope does have a below-average success rate. It is notable that these were all mid-table teams barring Sheffield United and it is interesting to see how they set-up their tactics.

The statistics also show Dúbravka having the highest success rate at 70% although his 1.95 final third passes per 90 falls below the average. It is also worth mentioning that someone like Ederson, who is renowned for his ability to cover a great distance with his kicks, features much lower on the list owing to Manchester City’s style of play. 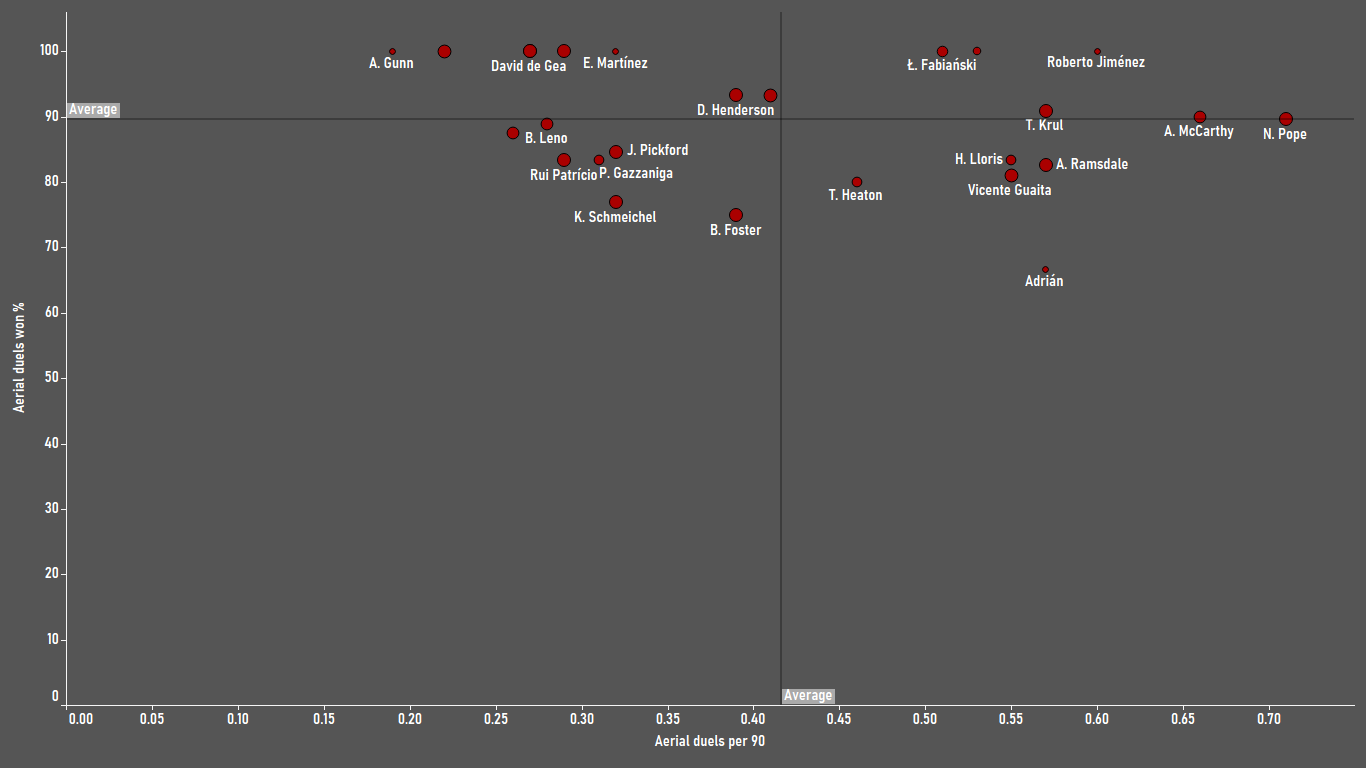 Another important aspect of goalkeeping is the ability of keepers to leave their line. The modern goalkeeper has had to adapt to the changes in the game and we have also seen a rise in ‘sweeper keepers’ and ball-playing keepers. In this section of our data analysis, we will look at the statistics for the Premier League goalkeepers when they leave their line. It is also understandable that goalkeepers with better defences would not leave their line to contest for the ball as much.

On the other hand, the likes of de Gea, Henderson and Martínez who performed well in the earlier metrics still have above average success rates but a below-average number of aerial duels per 90. 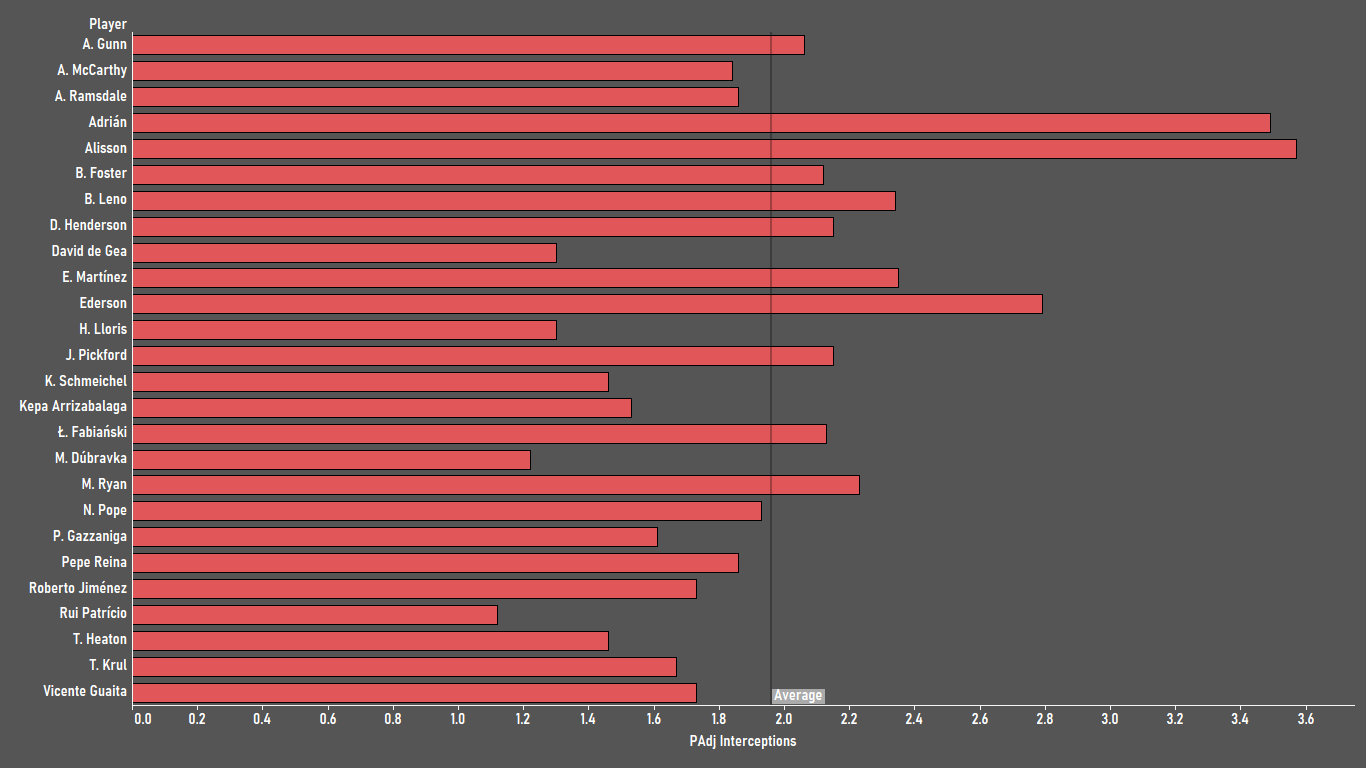 At the other end, Patrício has the lowest number of PAdj interceptions per 90 with just 1.12. Along with the likes of de Gea (1.30), Lloris (1.30) and Dúbravka (1.22), Patrício seems to be part of a list of more traditional goalkeepers who are comfortable staying on the line. 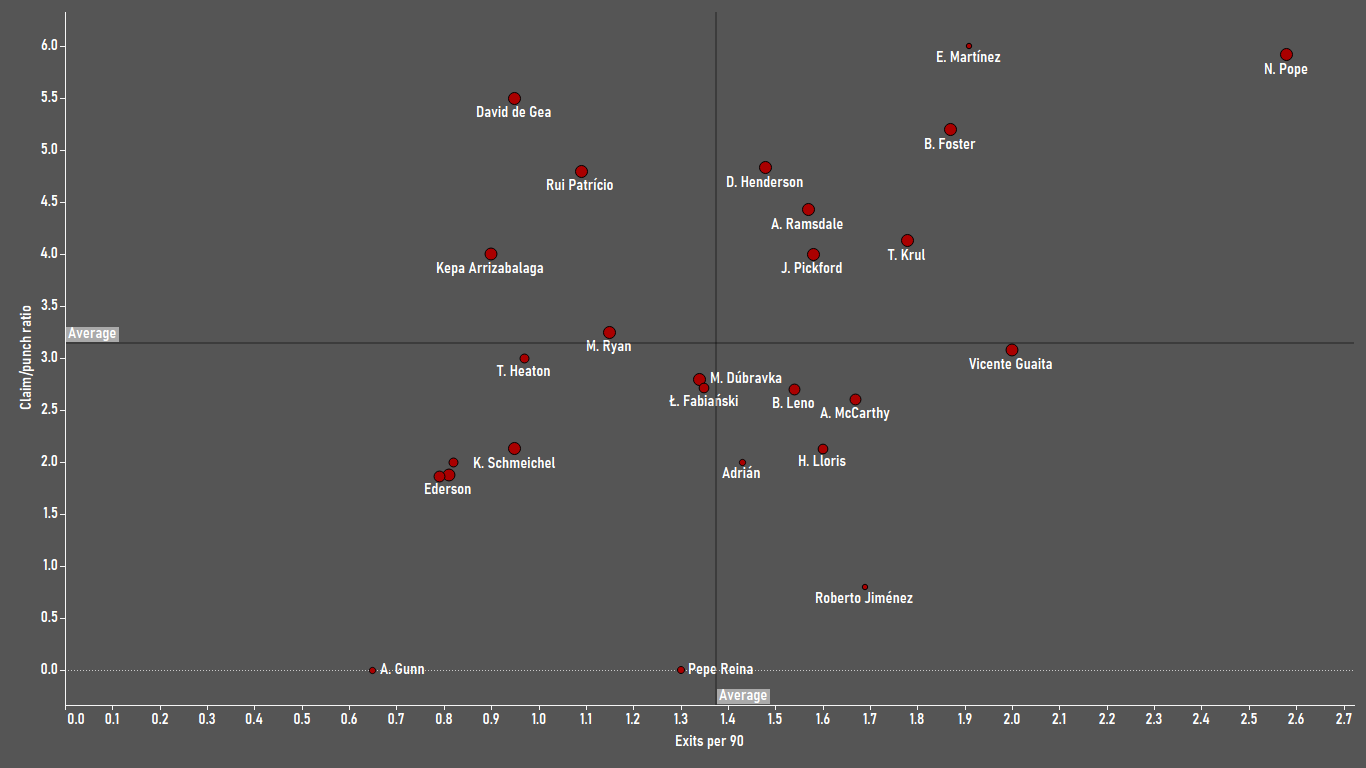 The above graph confirms what we saw earlier as well. The more traditional goalkeepers that we had mentioned have much fewer exits per 90 as compared to the others. They also have relatively higher claim to punch ratios, showing that they prefer to catch the ball as opposed to punching it out of danger. The interesting statistics are that of Allison and Ederson once again as the two have about 0.8 exits per 90 and a claim to punch ratio of about 1.87. We had seen that they topped the PAdj interceptions metric but look more conservative when we see these statistics. Hence, we could assume that they do not generally come off their line unless absolutely needed, after which they are adept with dealing with any danger.

Towards the other end, Pope and Martínez also rank highly with 2.58 and 1.91 exits per 90 respectively. They also have large claim to punch ratios, showing their preference for getting hold of the ball as opposed to pushing it away from them. Ben Foster has also made about 1.87 exits per 90 while Guaita has made 2.00 and both have been key players for their respective sides. We once again see Henderson feature above average as well and it is evident as to why he is a player that Sheffield United would love to keep for as long as possible.

Not many would have thought that Pope would be fighting for the Golden Glove towards the end of the season and with a better defence, he may have just won it as well. The Englishman was excellent at the back and fit right into Sean Dyche’s tactics at Burnley. He proved to be more than capable of starting attacks from the back, playing long balls to their wingers and forwards while also reading the game well in order to make crucial saves and interceptions for his side. Through Burnley’s shaky campaign, Pope performed consistently well and this makes him one of the top performers last season.

Yet another English goalkeeper makes our shortlist and Gareth Southgate does have a selection headache in this position for the coming Euros. Henderson’s performance has been crucial to Sheffield United’s impressive first campaign in the top flight since promotion. The Blades have been known to play using their wing-backs and Henderson’s distribution has been key to the side playing out from the back. He has also been excellent between the sticks, making world-class saves to back up the solid Sheffield defence. It remains to see whether he will be called back by Manchester United but he has already started putting the pressure on de Gea, who although had a decent season statistically, was still heavily criticised for his errors at the back.

The last goalkeeper on the list is someone who, in another world, may not have even played last season. An injury to Leno meant that Martínez was called to step in between the sticks for an underperforming Arsenal. Their defence had been a huge concern and Leno’s injury was a serious cause for concern for Arteta. However, Martínez seized his opportunity and the defence seemed to flourish with the Argentinian in goal. His impressive ability along with his good passing and distribution was a revelation and he may have done enough to challenge Leno for a spot in the starting eleven next season. With Arsenal looking to step up their defence for next season, we may as well see Martínez’s statistics improve and he could further establish his place as one of the best in the league.