With Manchester City’s Champions League ban having been controversially overturned earlier in the day, the race for the top four spots in the Premier League was all the more interesting. Chelsea and Leicester had both suffered embarrassing defeats to Sheffield United and Bournemouth respectively and a win for Manchester United would see them leapfrog to third in the table. They came up against a Southampton side who were eyeing a place in the top half of the table and had managed to beat Manchester City just a week before. Ralph Hasenhüttl’s side were playing some good football and had been much better since that humiliating loss to Leicester City earlier in the season. In this tactical analysis, we will look at the tactics of both Manchester United and Southampton in their fixture. 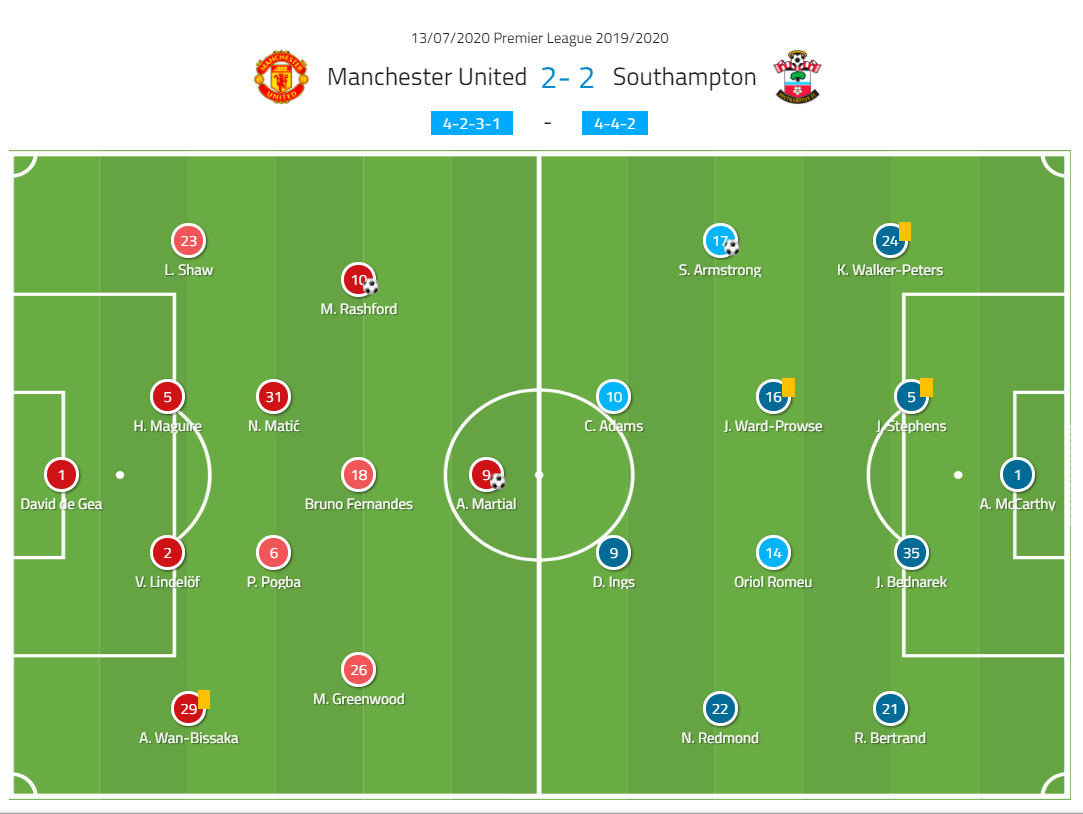 In the first part of our analysis, we will look at the lineups of both sides. Ole Gunnar Solskjær yet again named an unchanged side, meaning it was the fifth straight game that he had done so. Bruno Fernandes had become a crucial part of the midfield with his partnership with Paul Pogba blossoming. The front three of Marcus Rashford, Anthony Martial and Mason Greenwood were in full flow and had started to fire on all cylinders. The defence had been good despite looking shaky in a few games.

Southampton were also unchanged, with Danny Ings leading the attack alongside Che Adams. Ings had 19 league goals already and was chasing the golden boot while Adams had scored the winning goal against Manchester City with an incredible strike from just beyond the half-line. Nathan Redmond and Stuart Armstrong had been crucial down the wing for the Saints and captain James Ward-Prowse started in midfield as well. Oriol Romeu had found his way back into the starting lineup over the recent weeks and while the Southampton attack had looked good, the defence had still been inconsistent. 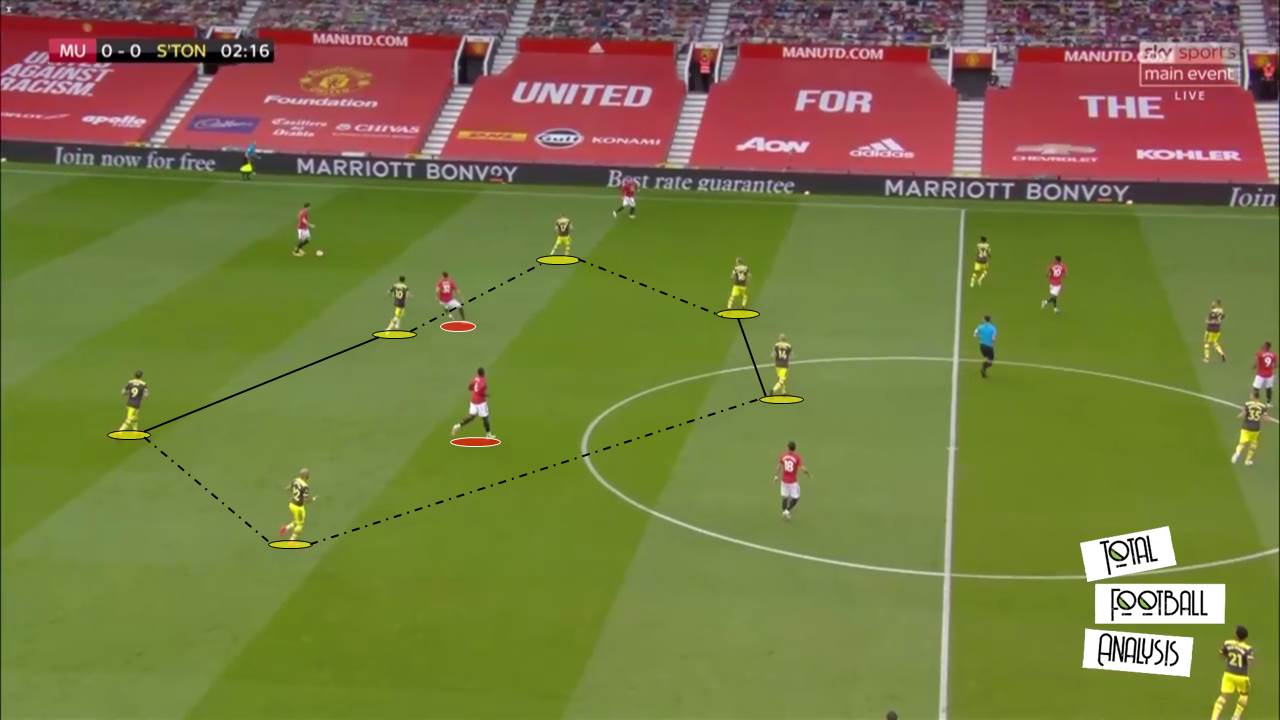 While Southampton started out with a 4-2-2 formation, it was often a 4-2-2-2 with the wingers playing slightly ahead of the central midfielders. With a 4-2-2-2, they could switch easily between a 4-2-4 while pressing and back to a 4-4-2 in defence which gave the team a great amount of flexibility. It also meant that their press was more effective and it should be noted that the wingers took up a very narrow position as well.

This sort of hexagonal shape formed by Southampton meant that the passing options to the double pivots of Pogba and Nemanja Matić were cut. While the latter could drop back to communicate with the defence, the former could not afford to do so and found it difficult to take control of the game. The dialogue between Pogba and Fernandes was also stemmed in this manner and Manchester United’s midfield were destabilised in these early stages. 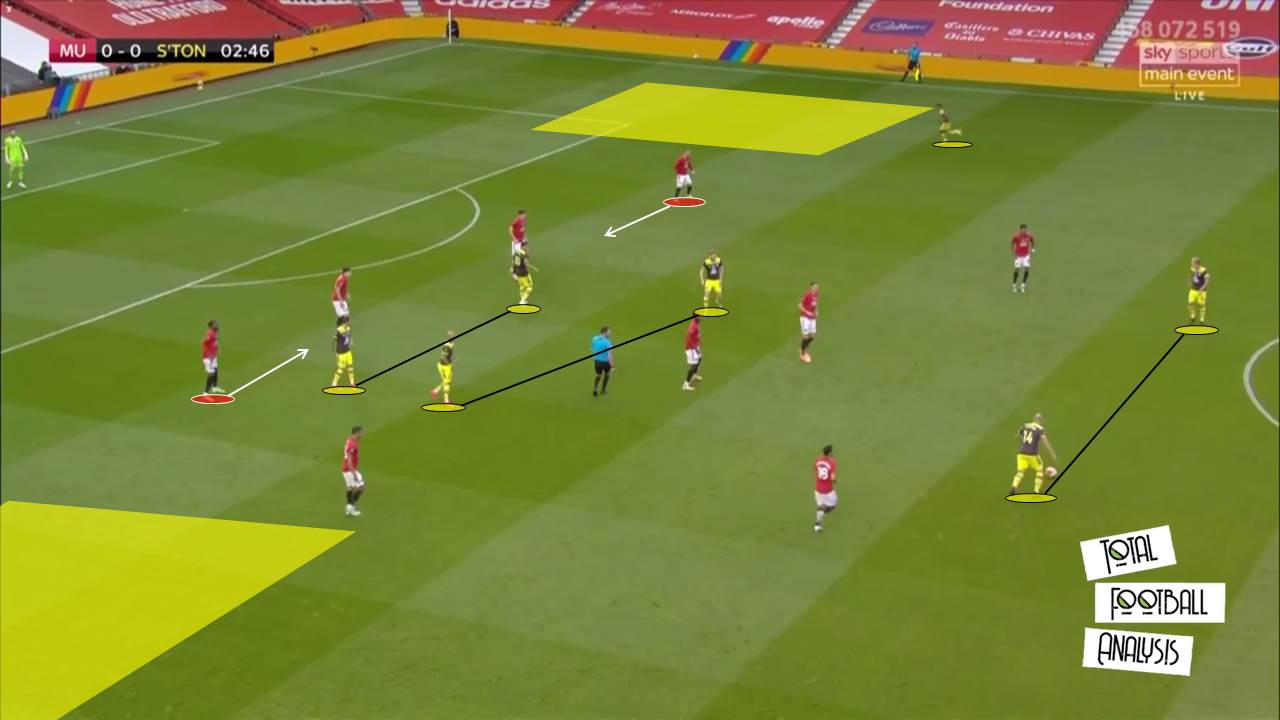 Not only did Southampton’s tactics see them shift the 4-4-2 offensively, but it also saw their defenders, especially their full-backs, push higher. The narrow wingers had already formed sort of a 4-2-2-2 formation but with the full-backs pushing up, it shifted to a 2-2-4-2 and even to a 2-2-6. These tactics aimed to overload the penalty box and the full-back would occupy the position of a traditional winger. The wingers in Redmond and Armstrong were almost extra strikers in these tactics and took up dangerous positions centrally.

The movement of the wingers towards the centre was key to these tactics as it forced Manchester United to play much more narrowly in order to prevent getting overloaded in the middle of the pitch. Such movement opened up loads of space for Ryan Bertrand and Kyle Walker-Peters to run into where they could then deliver crosses into the four players in the box. 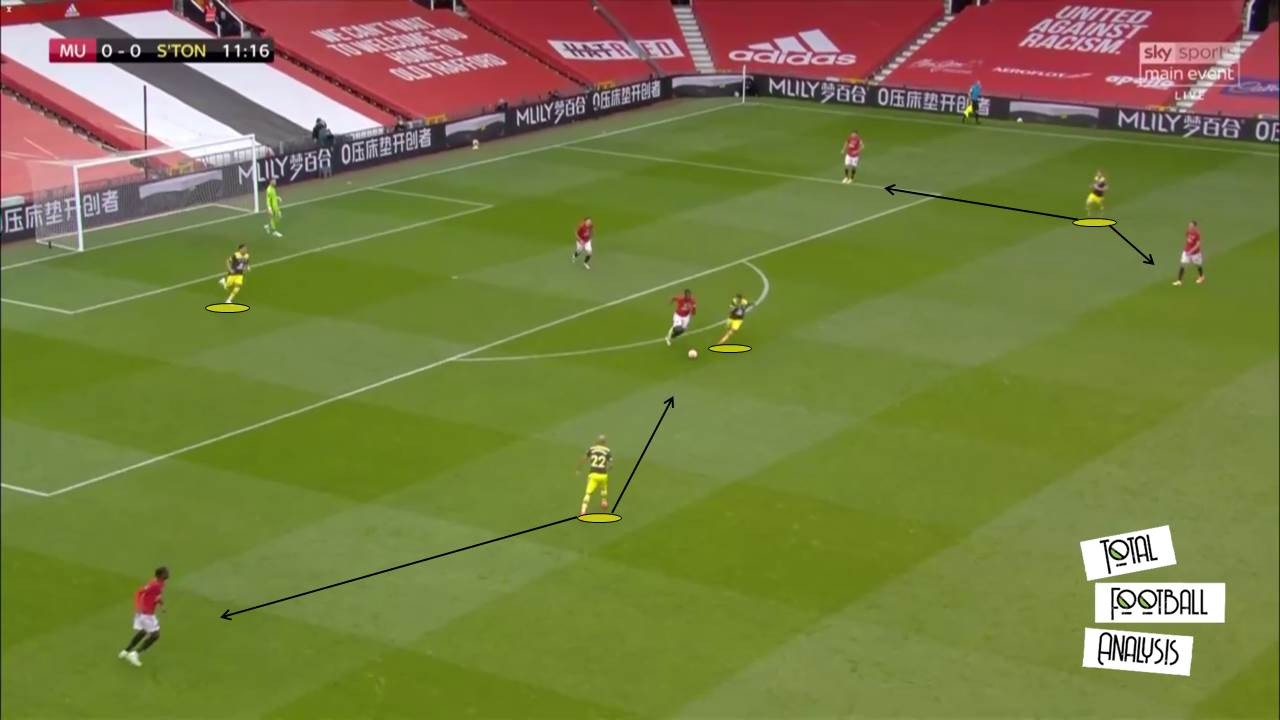 As mentioned earlier, the pressing of the wingers, as well as the strikers, puts the Manchester United defence under pressure. United liked to build-up from the back and this press meant it was very difficult for them to push forward from their own defensive third. Pogba had to drop behind very deep in order to receive the ball and even then was put under pressure from one of the attackers. The use of four players in the press also meant that when one player engaged the opponent, the others could cut out his immediate passing options while one could also support him. These tactics played a crucial role in Southampton’s early attacks which eventually saw them take the lead. 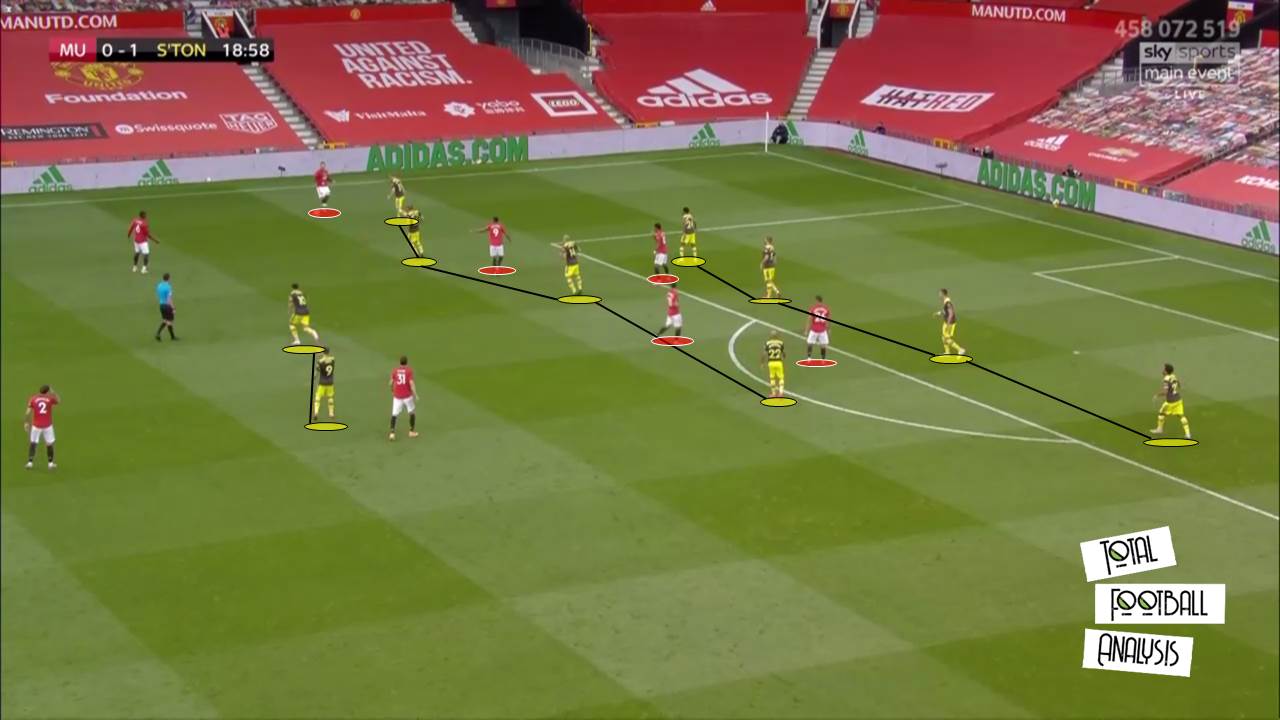 As we have seen since the arrival of Fernandes, Manchester United look to play with a more fluid front four. This means that the likes of Martial, Rashford, Greenwood and Fernandes do not stick to their starting positions throughout the game but rather interchange positions while attacking. Such tactics mean that the opposition defenders would not have to worry about just taking care of one attacker but different attackers at different parts of the game. The most commonly interchanged positions were that of Martial and Rashford while Fernandes would also move up to allow Rashford to drop deeper later on.

Such fluidity in attack meant that the Manchester United attackers could create spaces in the Southampton defence. As mentioned earlier in our tactical analysis, the Saints maintained a 4-4-2 in defence and were very compact at the back, with the midfield line staying very close to the defence line. The switching of positions across the front four, however, meant that defenders would be dragged out of position and hence half-spaces could be created for the attackers. 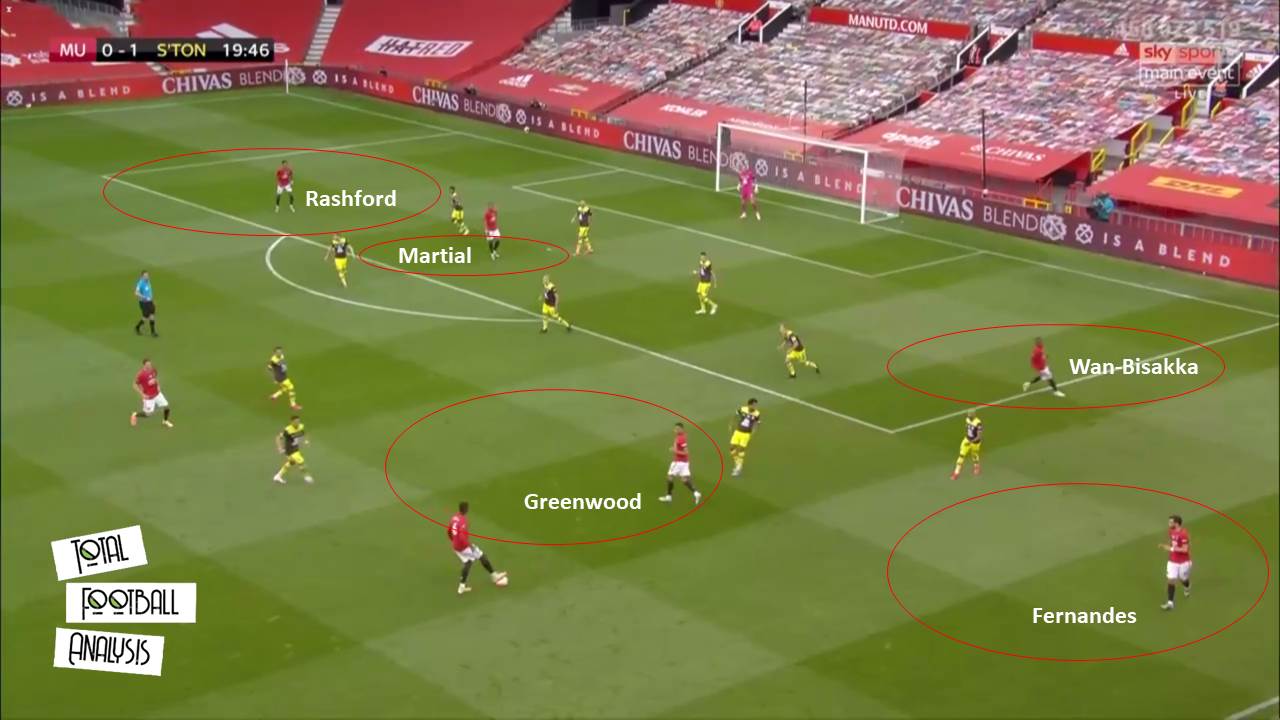 Along with the interchanging front four, the full-backs in Aaron Wan-Bisakka and Luke Shaw would also push higher, Manchester United looking to create overloads on the wing. This further created half-spaces in the defence where the forwards to move into and receive the ball. Southampton would have to get their strikers behind the ball in such cases so as to provide some cover through the centre while the midfielders can move out wide.

However, the creativity and movement of the Manchester United attack was unmatched by Southampton who still could not completely cover up the spaces. This eventually led to Manchester United equalising from the situation shown above. The interchange between Greenwood and Fernandes, coupled with the underlap of Wan-Bisakka means that Southampton looks to focus their defence down the right. Martial finds himself in a half-space near the penalty spot with Rashford beside him almost unmarked. Martial receives the pass from Pogba and plays a simple ball to Rashford who can easily slot home the equaliser. 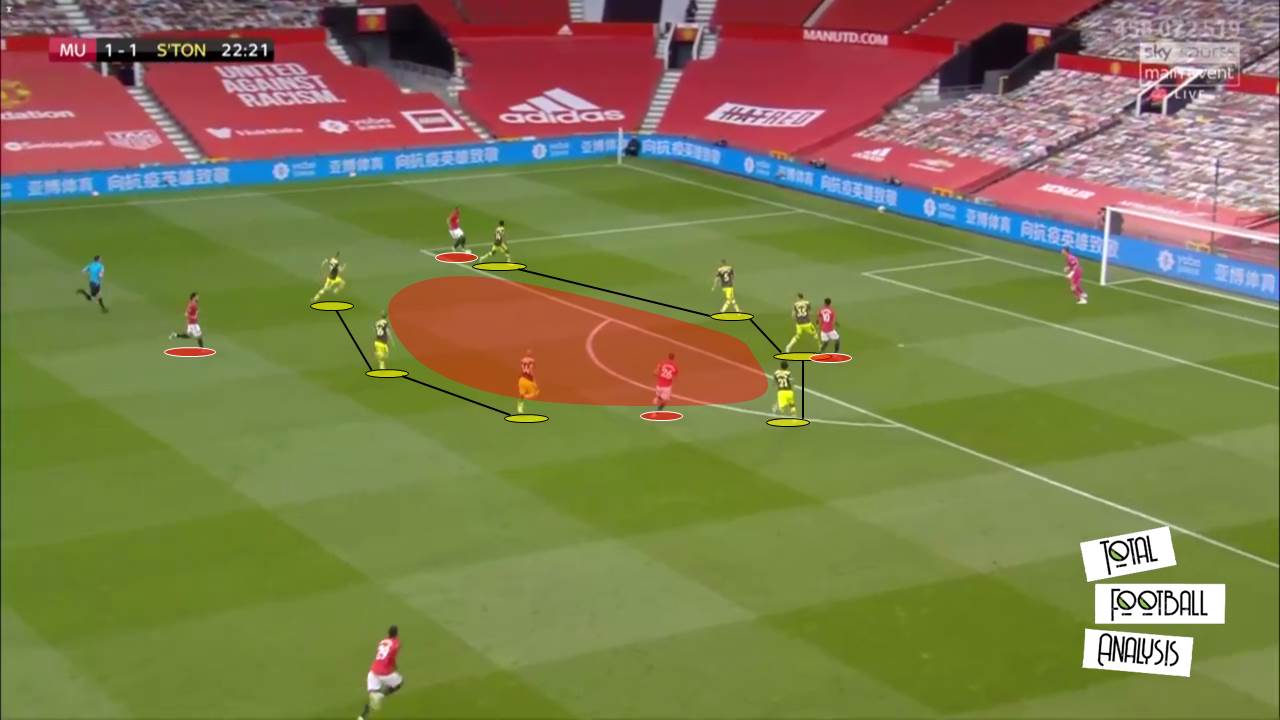 These tactics were also increasingly effective when they would move quickly to the other end. With Southampton pressing so high, a few quick passes meant that United could beat the press and start an attack. This was not exactly a counter-attack but it meant that the Southampton midfielders had to track back in order to prevent being outnumbered in their final third. However, they could not organise themselves in the compact structure that they had maintained earlier and this created gaps in between the lines. It allowed Manchester United to put the pressure back on Southampton and they managed to take come-back to take the lead in the game. 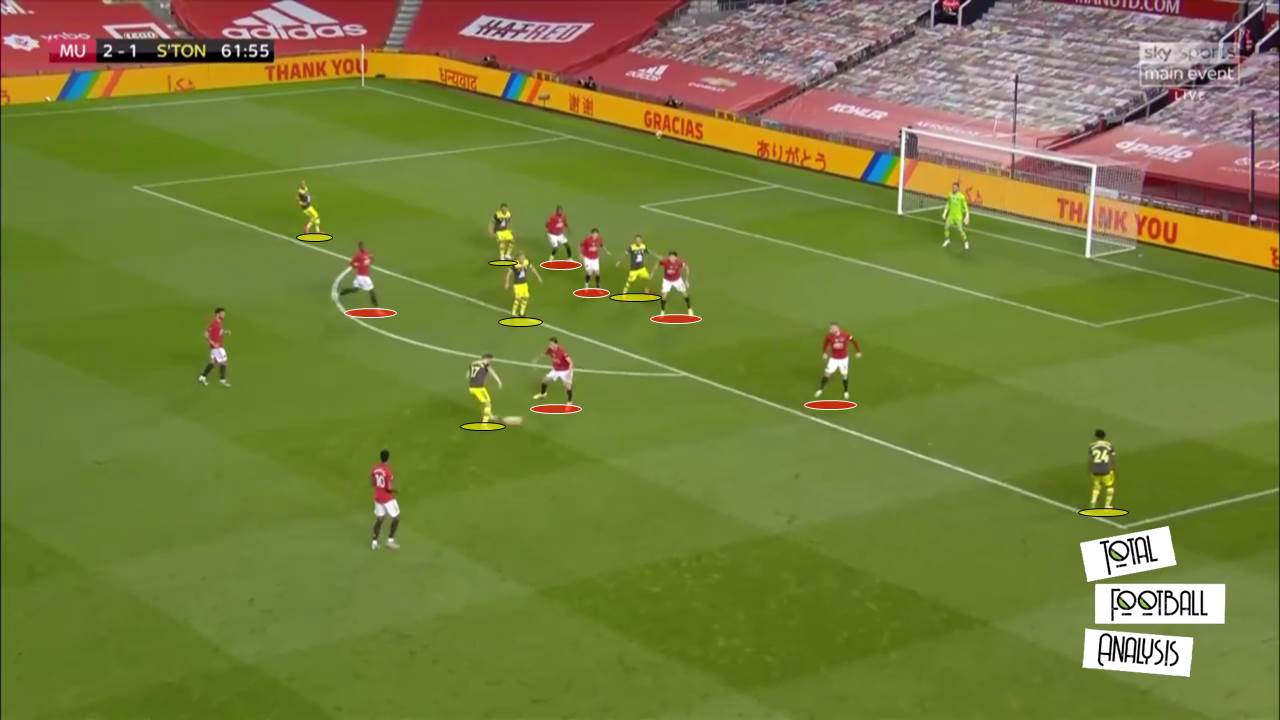 Having fallen behind after conceding two quick goals, Southampton did not sit back but looked to control the game. Manchester United, in their previous few games, had looked to dominate possession and put the game to bed as early as possible before rotating the squad. However, Southampton would not allow it this time and piled the pressure on their opponents.

Playing with about six players forward pretty much during all their attacks, the Saints look to overload the penalty box. Manchester United’s defence had looked shaky during a few of their previous games and although it had not been detrimental earlier, it was clearly putting them under pressure this game. 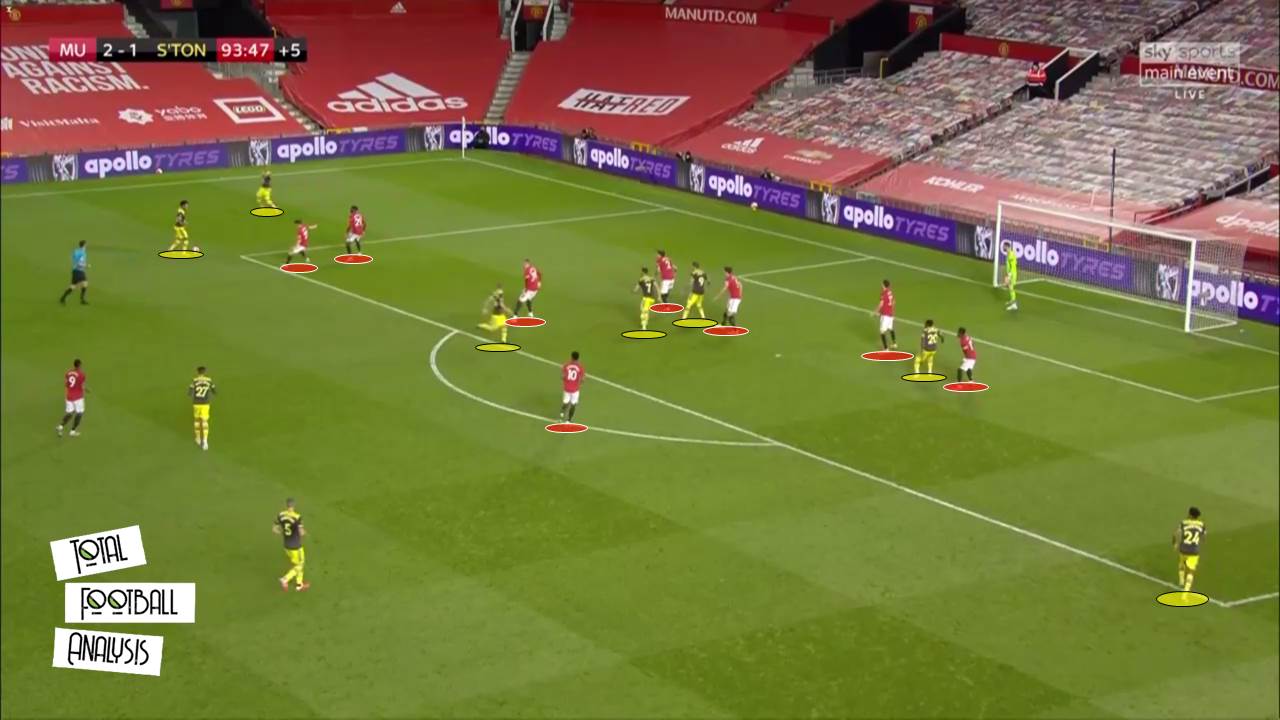 A head injury to substitute Brandon Williams and the fact that United had used their three stoppages for substitutions meant that they had to see out the game with 10 men. The already under pressure defence now had to restructure themselves by moving into a 5-3-1 formation, with Matić as the third centre-back and Fred at left-back. This meant that Southampton could now push in more players to United’s penalty area and again match them in number, as they had done earlier. The six players forward earlier now became seven with Ward-Prowse also moving forward to attack.

Manchester United’s defence had not been tested like this since the restart and after sustained attack from Southampton for about five minutes, they conceded an equaliser from a corner. The shortage of players did not do United any favours but with the pressure that Southampton build-up towards the ending stages of the game, it looked like they were bound to score.

Southampton would be pleased that they came away with at least a point, although Hasenhüttl may feel like he could have come away with all three. Defensive slip-ups meant that they could not capitalise on all the good attacking work that they had done and this would be something that they would be looking to fix next season. Southampton look a much-improved side now as compared to earlier in the season and would be pleased to come away from a tough week of fixtures without losing a game.

Manchester United, however, could not capitalise on their rivals dropping points and Solskjær would not be pleased with the way the side defended through the game. Having had the opportunity to go a point clear in third, his side put in a below-par defensive performance and saw their impressive winning run come to an end. Fatigue could be an important factor to consider as well, with Solskjær not being able to rotate his squad today as he had done in the earlier games. With three games to go, Manchester United cannot afford to count on other results and have to focus on winning their games, especially the crucial final fixture against Leicester City.