Madagascar has never been considered a hotbed of football talent within the African continent. However, their performances at AFCON 2019 certainly turned some heads, and they quickly became a team favoured by the neutrals for their exciting brand of football and gung-ho approach to games. Their 2-0 victory over a Nigerian side featuring Manchester United’s Odion Ighalo and former Chelsea man John Obi Mikel certainly shocked the African footballing world. The footballing authorities on an island known more for a hit kids film than sport will be hoping this success propels its players into some of the top leagues.

One of the stars of the tournament for Madagascar was defensive midfielder Marco Ilaimaharitra. The Sporting Charleroi man currently plies his trade in the Belgian Pro League, where he was a constant feature for a side that finished third overall. Following a transfer from Sochaux in France, Ilaimaharitra has been ever-present for Charleroi since the 2017/18 season. At only 24 years of age, Ilaimaharitra is still developing as a footballer, and Charleroi will be hoping he can continue to improve.

This tactical analysis, in the form of a scout report, will look at the strengths of the Madagascan’s game. This analysis will focus on two key areas where he excels as a player, before explaining how these fit perfectly into the tactics preferred by his side.

As a predominantly defensive midfielder, Ilaimaharitra’s main job is to protect the back four by recovering the ball. The data would suggest that this is one of his stronger attributes, with an average of 9.54 recoveries per 90, alongside 4.75 counterpressing recoveries on average per 90. When we look at the below tables, we see that he makes most of his recoveries in the central third of the pitch, with pressing being the major cause of recoveries. We also see that he rarely resorts to the slide tackle, instead of focusing on his positional play and ability to read the game and his opponent.

Anticipation, positioning and reading the game help a player to recover the ball. Ilaimaharitra, while not blowing the league away in terms of the data, appears to possess all of these traits, which helps him and Charleroi in getting the ball back into their possession.

For example, in the game against KAA Gent, Ilaimaharitra showcased these abilities and helped his side to a comfortable 4-1 victory away from home. In the first image below, we see how well positioned the Madagascan is. He is close enough to close down the opposition midfielder, while also being able to close off a pass into the striker if he moves to his left. 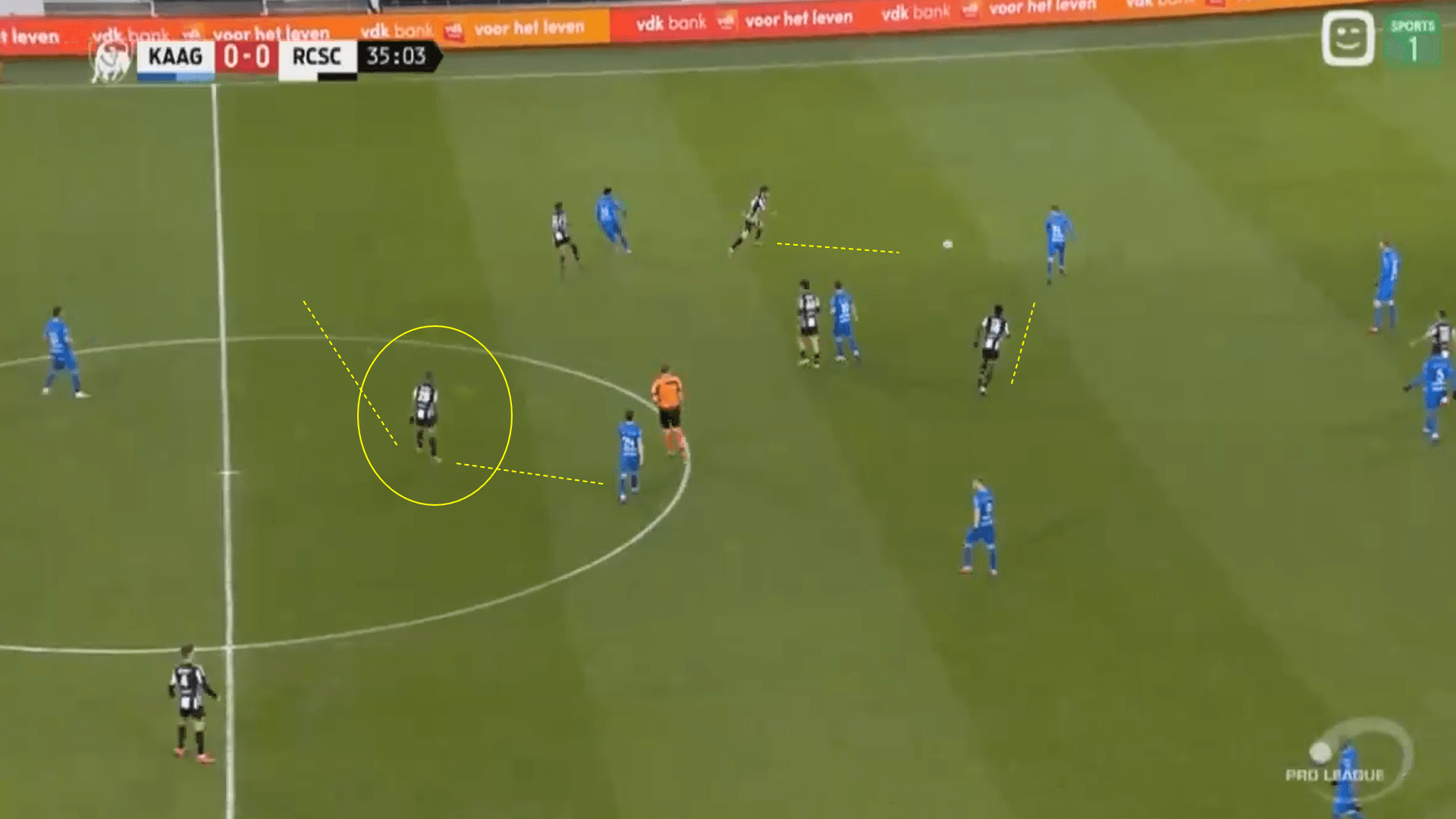 As the play progresses, we see that Ilaimaharitra has moved slightly further left, while his teammate is also moving into a position to help the two other Charleroi forwards pressing the player in possession. They are looking to deny the ball carrier the chance to pass it forward, looking to create a trap. 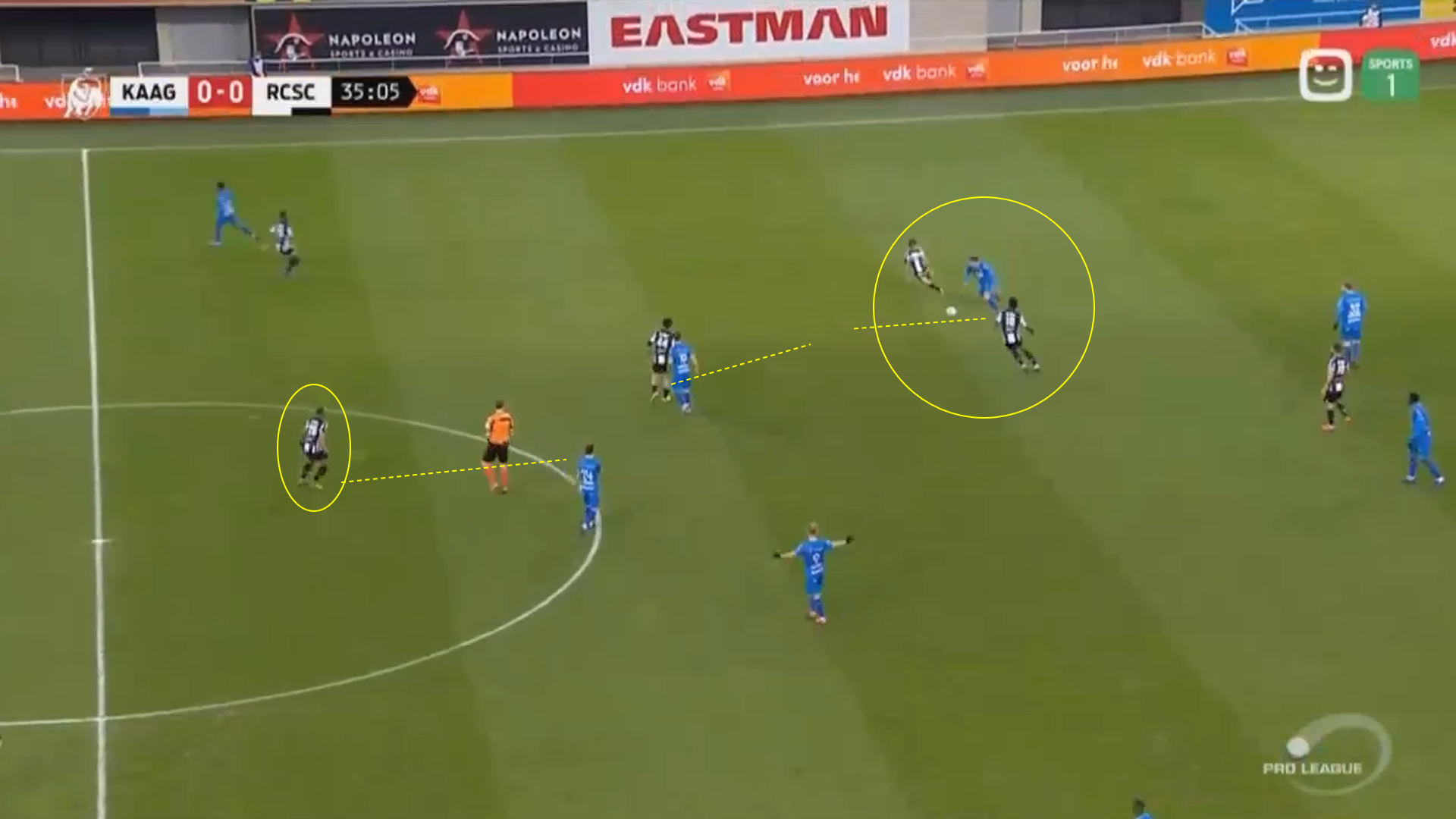 In order for the trap to be effective, Ilaimaharitra has to be able to support the press with the secondary action. As we see below, the Charleroi press has been very successful in denying that direct ball and forcing the player into moving the ball inside, where Ilaimaharitra is. While he is still quite a way from the player who eventually receives the ball, he anticipates this and moves quickly to close down the receiver and win the ball back for his side. 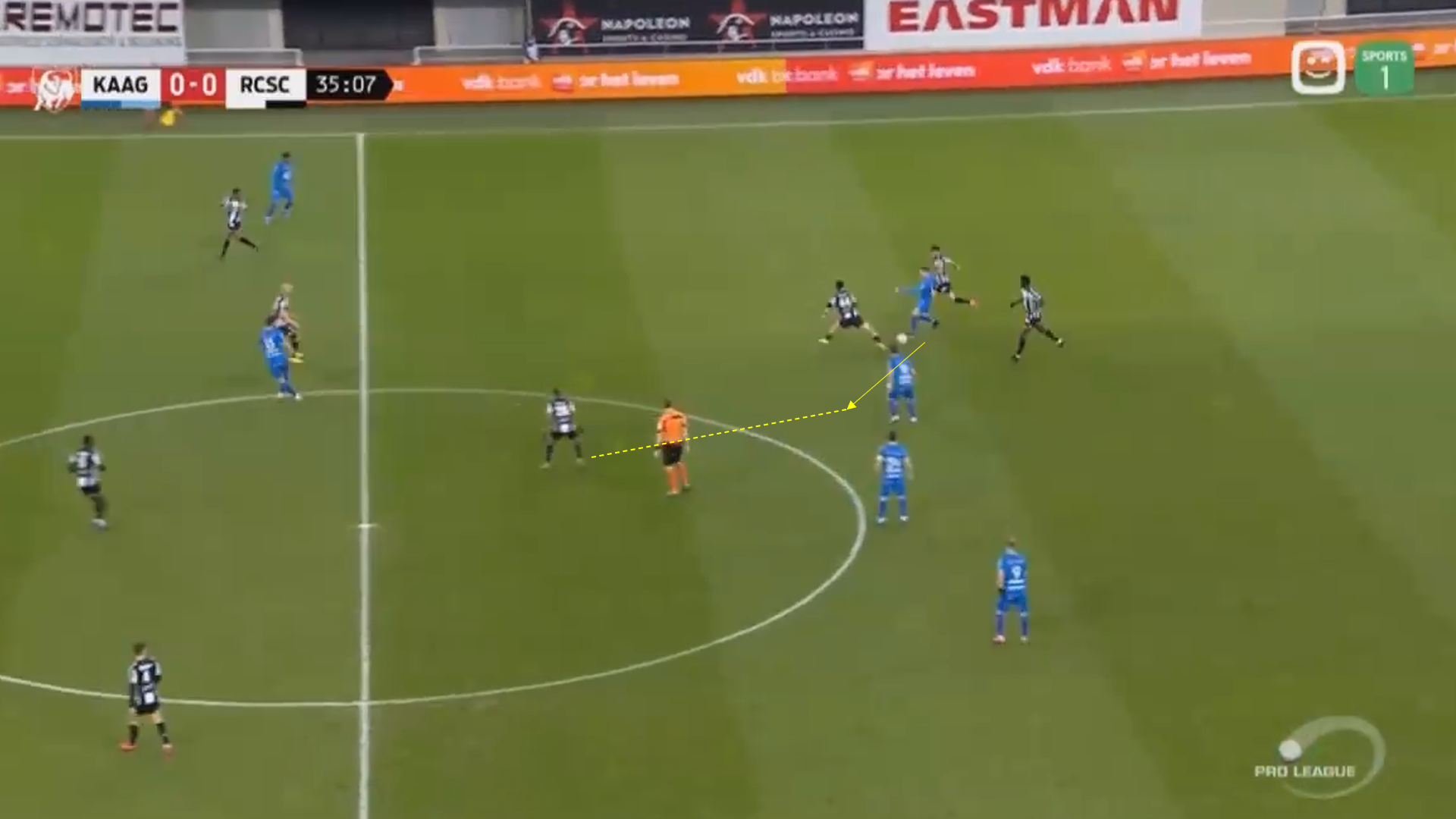 This passage of play highlights how Ilaimaharitra is able to read the game well, while also complementing the defensive tactics that his side operate with. Therefore, while his stats aren’t remarkable, when we watch footage of the player we see how accomplished he is as a defensive midfielder in winning the ball back for his side. Furthermore, he helps support the press of the forward players with the secondary action.

Moving the ball on

While his strength on the defensive end is his ability to recover the ball, at the other end he is a reasonable passer. Data would suggest that the Madagascan prefers to shift the ball on to the other more creative players in his team, rather than keep the ball himself. With two goals this season, he has exceeded his 1.88 xG, and with one assist, he also achieved his 0.95 xA for the season. Yet he is not a goalscoring or creative midfielder, so it would be unfair to judge him by his goals and assists output.

Instead, he ensures the ball is shifted from the defence to the attacking players. Aiding in this transition, he averages 38.78 passes per 90, just outside the top 50 for central midfielders. Yet with an 81.9% accuracy rating, we can safely say that he is a competent passer of the ball. In terms of pass type, Ilaimaharitra sits in the top 25 for progressive passes, again highlighting his desire to transition the ball forward, with 7.98 per 90, with an average progression of 211.04 metres.

As the above data also shows, Ilaimaharitra rarely progresses the ball through running, at under one progressive run averaged per 90 and only 35.33 average metres. Alongside only 0.67 deep completions per 90, we can start to build a clear picture of the tactical role Ilaimaharitra plays.

For example, in the game against KV Kortrijk, we saw examples of how Ilaimaharitra likes to get the ball quickly into the more creative players. Kortrijk are in possession in the Charleroi half, where Ilaimaharitra again showcases his ability to read the game, intercepting and beating the attacker to the pass. We see plenty of space in front of the midfielder, into which he could look to drive the ball. 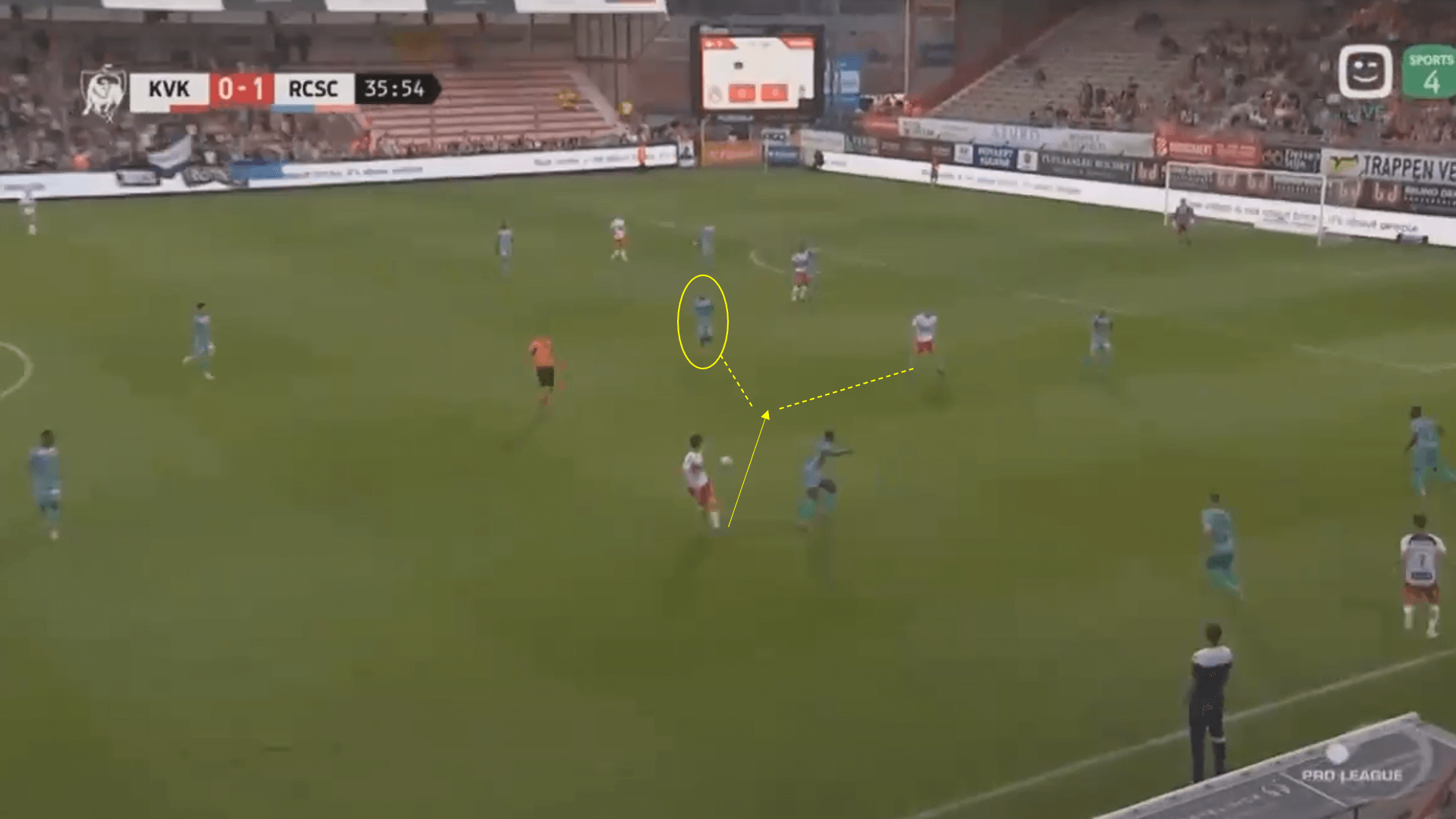 However, this is not the Madagascan’s game. Instead, once he wins the ball, he barely takes a touch before moving the ball into the more creative players ahead of him. This gets Charleroi pushing forward on a counterattack, with the ball in their more creative players’ possession. Ilaimaharitra knows that he is not the creative force of the side, and ensures that those players get on the ball as soon as he has won it back. 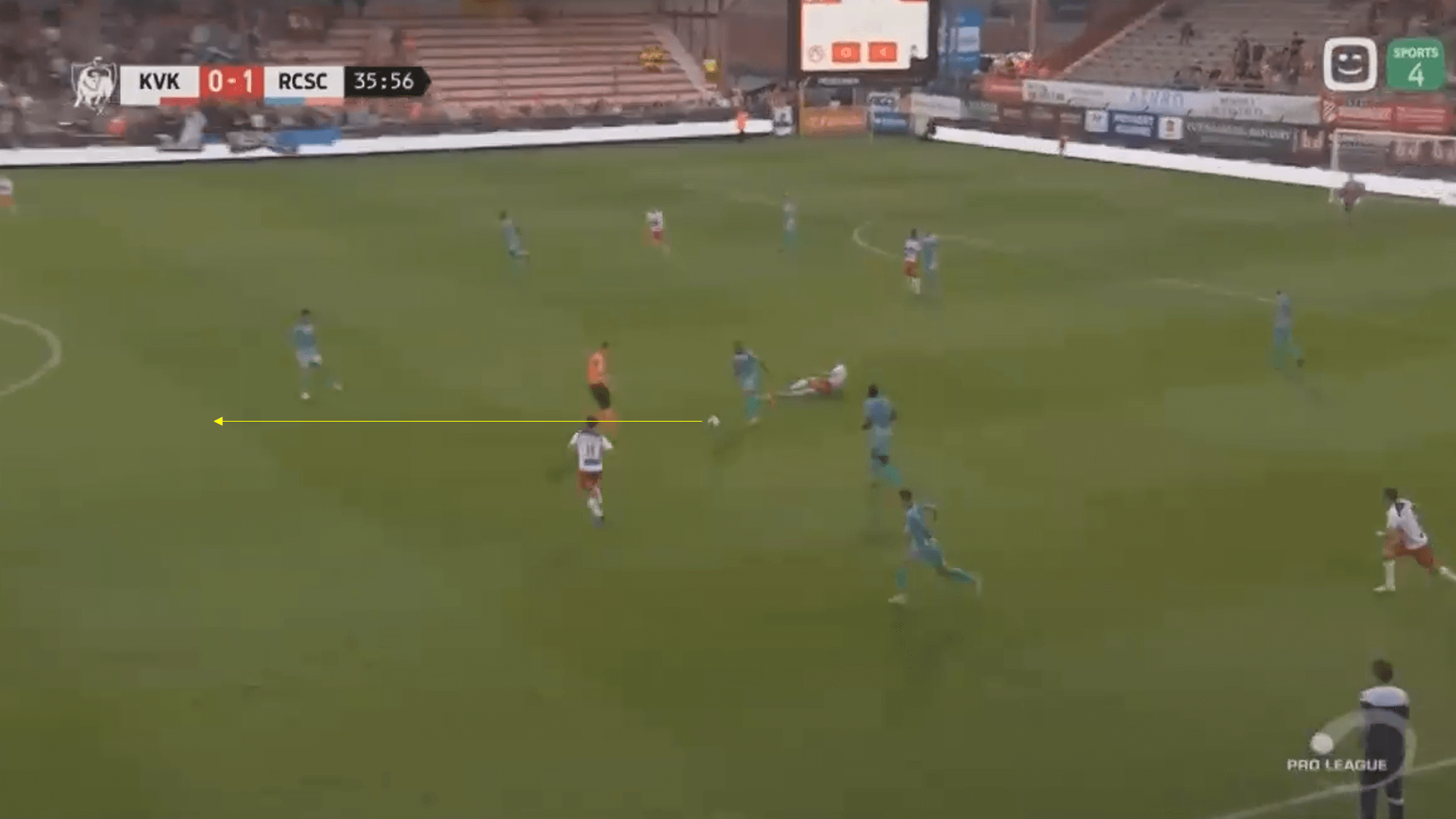 By no means does Ilaimaharitra only look for a forward pass. As with his recovering of the football, he is an intelligent player and is happy to look for lateral or backwards passes when they are a better option. His game is to keep the ball moving, either as an option for a defender to move the ball into the midfield area or as the player winning the ball back and facilitating the creative players to transition from defence to attack quickly.

While the data hardly leaps off the page, when it comes to the tactical set up of Charleroi, Ilaimaharitra is the perfect midfielder. He usually operates on the left-hand side of a deeper lying central two in the 4-2-3-1 formation, meaning he isn’t the only player responsible for contributing to the defensive side in midfield.

In terms of recoveries, the data highlights how Ilaimaharitra is a key member of the midfield, with his side being in the top three when it comes to average recoveries per 90. With an average of 80.65, we see that Charleroi recover 40% of the ball in the central third, the area that the Madagascan likes to recover the ball in. 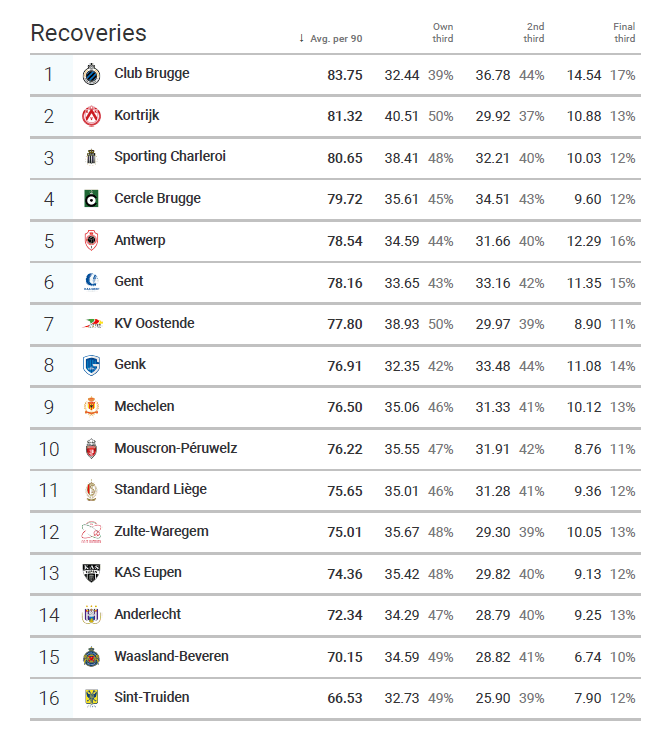 Where this really aids the tactical setup of the team is the fact that they average under 50% possession per 90. Therefore, without having as much of the ball, Charleroi are tactically set up to win the ball back in areas where they can take advantage and be efficient. Recovering the ball in the central third, where Ilaimaharitra does, allows the side to spring counter-attacks and transition from attack to defence without having to build up from deeper in their own half.

Furthermore, it allows the team to get the more attacking players on the ball quicker, another aspect of the Madagascan’s game. We now see why he prefers to shift the ball on, rather than dribble and progress the ball himself. Within the tactical setup of Charleroi, Ilaimaharitra knows he has a simple role of winning the ball in the central areas, before playing it on to the attacking players in the side, such as Shamar Nicholson and Ali Gholizadeh. As the below graphic suggests, Ilaimaharitra passed ten times more than he dribbled over the final five games of the season. 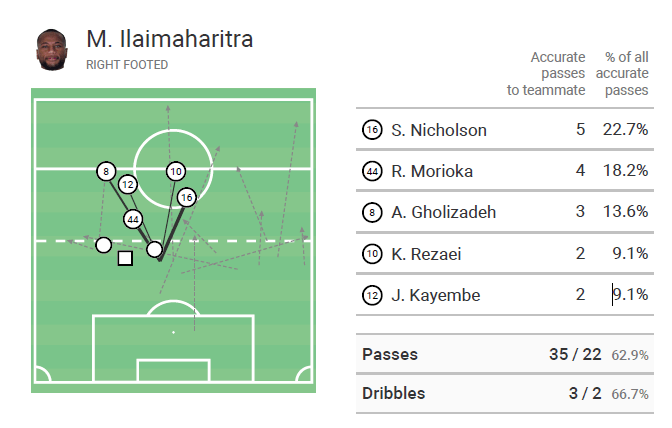 When we consider that Gholizadeh has the club high assists with seven, while Shamar Nicholson is the second top scorer at the club with eight, we can assume that Ilaimaharitra knows that in order for the side to create and score goals, he needs to ensure the ball gets to these players as often as possible. Knowing your role tactically is one thing, but being able to implement it is another. Clearly the Madagascan midfielder is able to do both to a level that allows Charleroi to be successful.

While Chaleroi’s players have been mentioned in transfer rumours, it is unlikely that bigger sides would look at Ilaimaharitra as an upgrade option for their midfield. Yet, for Charleroi, he has been a reliable player over the last few seasons, and certainly one of the important players when it comes to how they want to play the game.

Recovering the ball and feeding the creative players is something the Madagascan is effective at, and, being still only 24 years old, may even improve upon. If bigger clubs are looking for a player who is disciplined and able to carry out a tactical role effectively, Ilaimaharitra may well be a good option.