For most leagues, consistency is the key to success, with usually those who are the most consistent over the course of a full season winning trophies and getting promoted. In the Belgian second tier, this is not the case. Split into two phases, a side only needs to win one of these phases to qualify for the promotion playoff. For KVC Westerlo, over the course of both phases, they were by far the most consistent side, winning the most combined points. However, they finished third during the first phase and second during the next phase, meaning they did not get the chance at promotion.

One of the keys to Westerlo’s success this season was the performances of South African winger Kurt Abrahams. The small 23-year-old has grown season on season, and this year looks to have really emerged as a player capable of playing at a higher level. Abrahams will look to emulate fellow countryman Percy Tau, who looks set to return to EPL side Brighton and Hove Albion following his Belgian Pro League triumph and UEFA Champions League appearances with Club Brugge.

This tactical analysis, in the form of a scout report, will highlight the strengths of the young South African’s game. The analysis will look at the strengths of Abrahams at both ends of the pitch, as well as assessing his readiness to move up a level.

An eye for goal

Abrahams was in sensational form in front of goal this season, scoring nine league goals with an average of 0.35 per 90, which was also above his 7.53 xG. This was in part due to his desire to get shots off in the right areas. With 70 shots in total this season, Abrahams took only two shots less than league top scorer Thomas Henry of OH Leuven. Abrahams averaged 2.69 shots per 90 with a respectable 0.11 xG per shot.

As we see from the graph below, all but one of Abrahams’ goals came from inside the penalty area. For a wide man, his 23.5% goal conversion ratio inside the area is impressive, as well as his 50% shots on target when in the same area.  Abrahams averaged 3.04 touches in the penalty area per 90, which, if we consider his average shots per 90, would suggest that the majority of these touches resulted in a shot on goal. 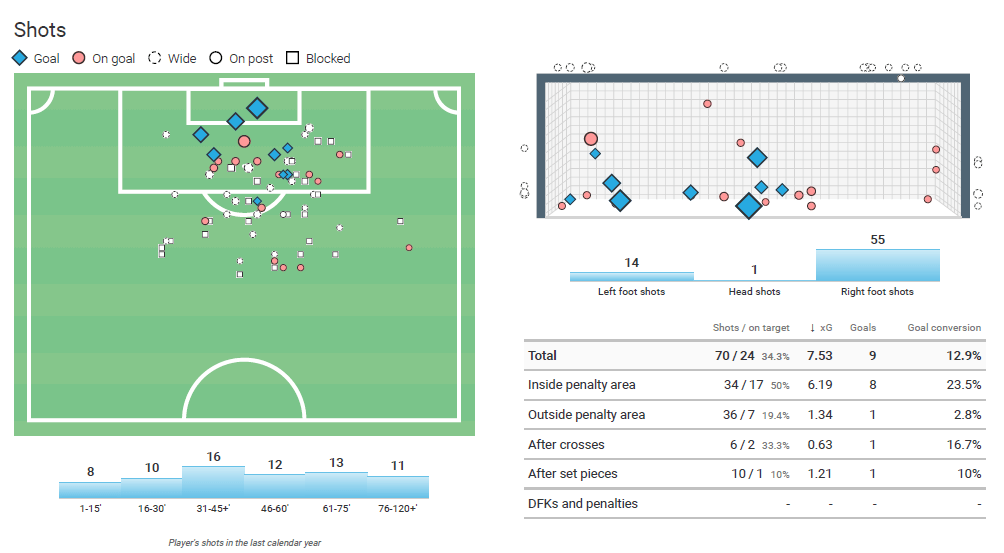 What helps Abrahams is his footballing intelligence and ability to use both feet. He is comfortable finishing with either foot and, while being a winger, possesses great positional sense that many a striker would envy. As we shall see from the below image, he reads the game well and ensures he is in the right position to finish off attacking moves.

In the game against SV Roeselare, we see Abrahams circled here on the edge of the box on the right-hand side. He appears to be the obvious option to receive the ball from the midfielder. He could also look to run in behind and hope for a perfectly timed ball. This is how he fits into their tactics. 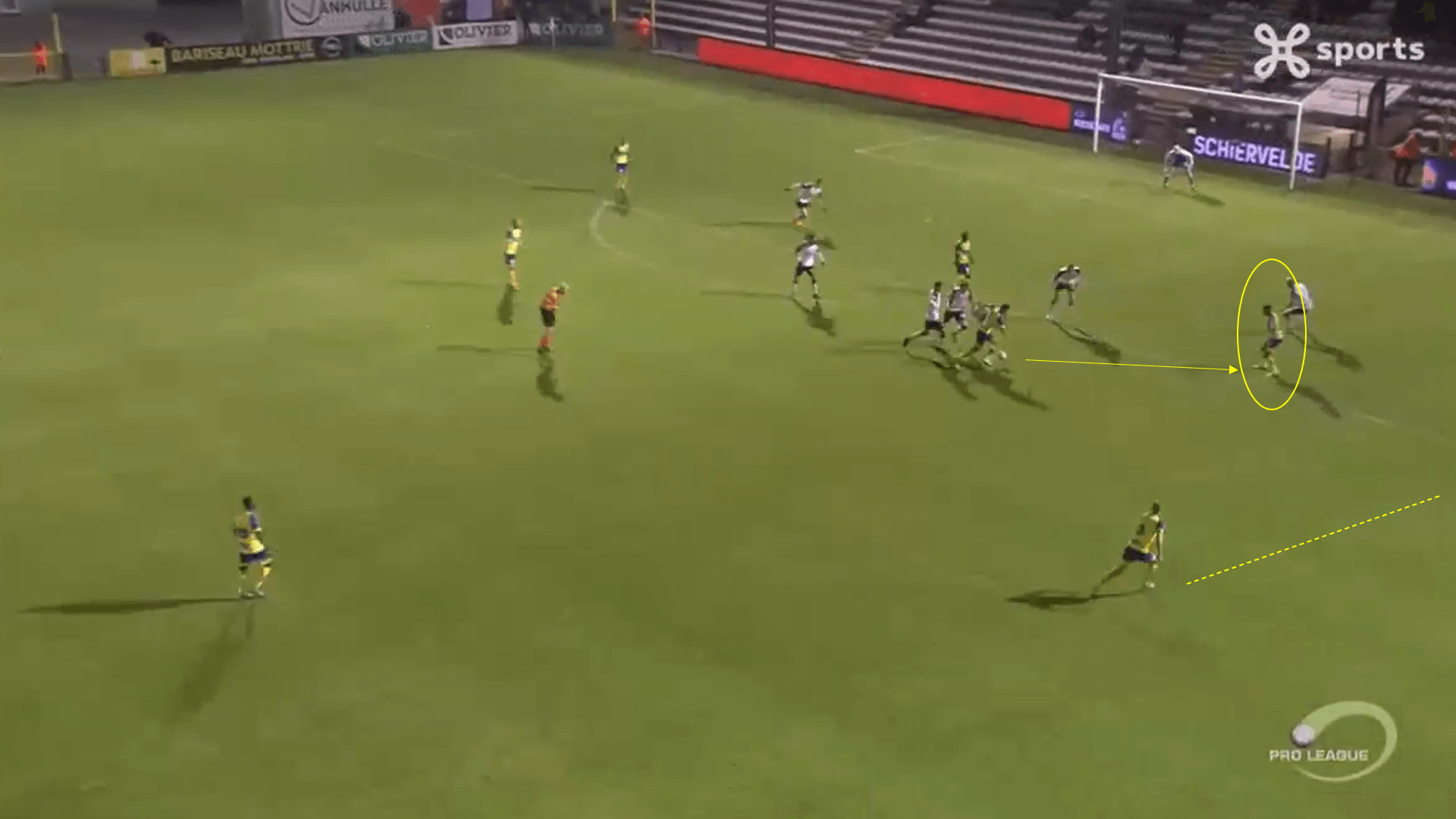 When he receives the ball in the above position, Abrahams has clearly spotted the overlapping run of the right-back and immediately moves the ball further wide. What this does is to shift the defenders over and frees up the South African in the box. Abrahams could have looked to beat his man, or even attempt a shot himself, but realised that a better chance could be created by moving the ball again. 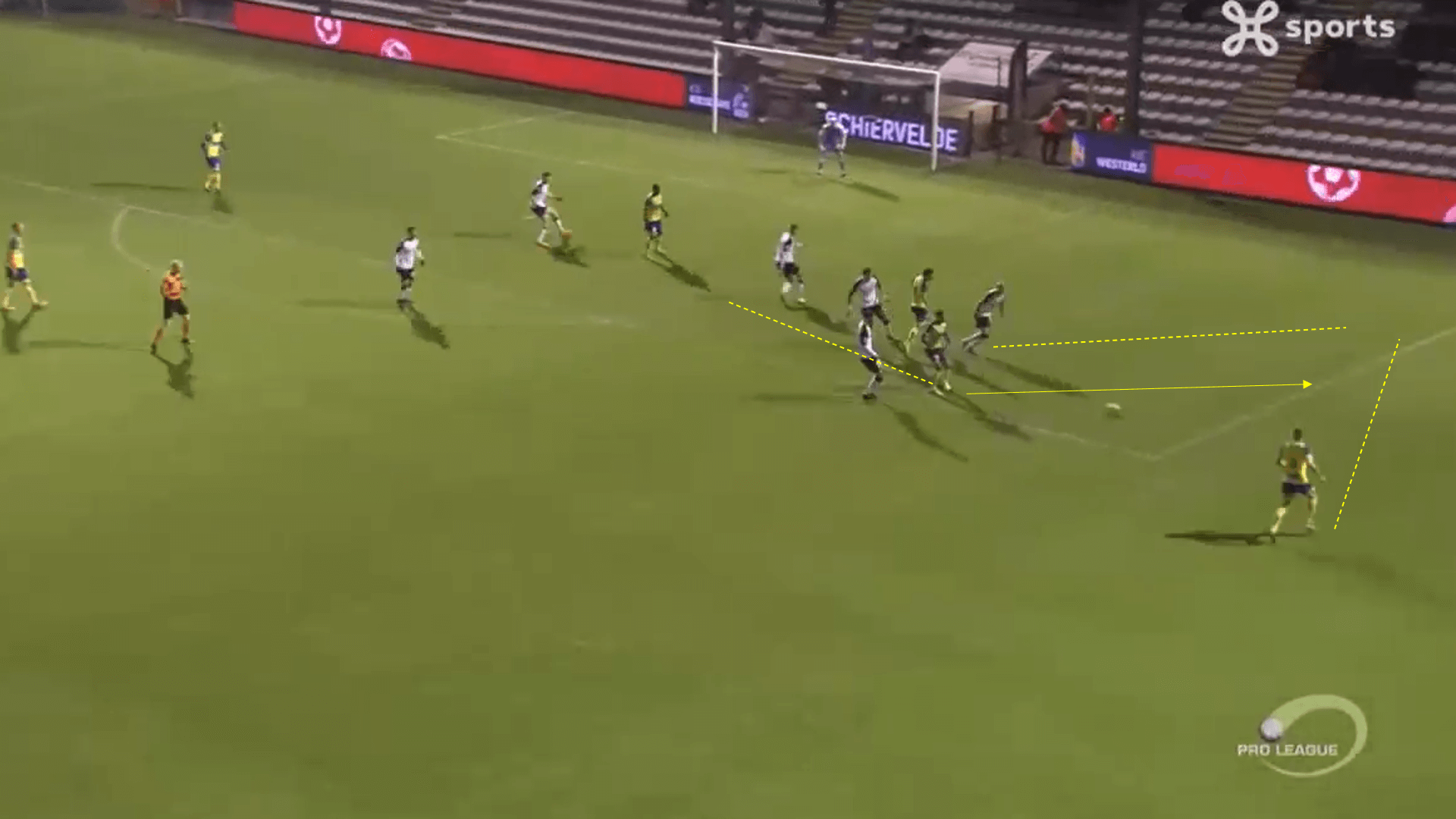 Once the cross comes back in, we see Abrahams in the perfect position to receive it and provide a tidy finish. He has been able to drift away from the defender through a combination of speed and his ability to anticipate the area that the ball will be played into. This all came from his reading of the game to facilitate the ball getting further wide, rather than attempting to keep the ball himself when he first received it. 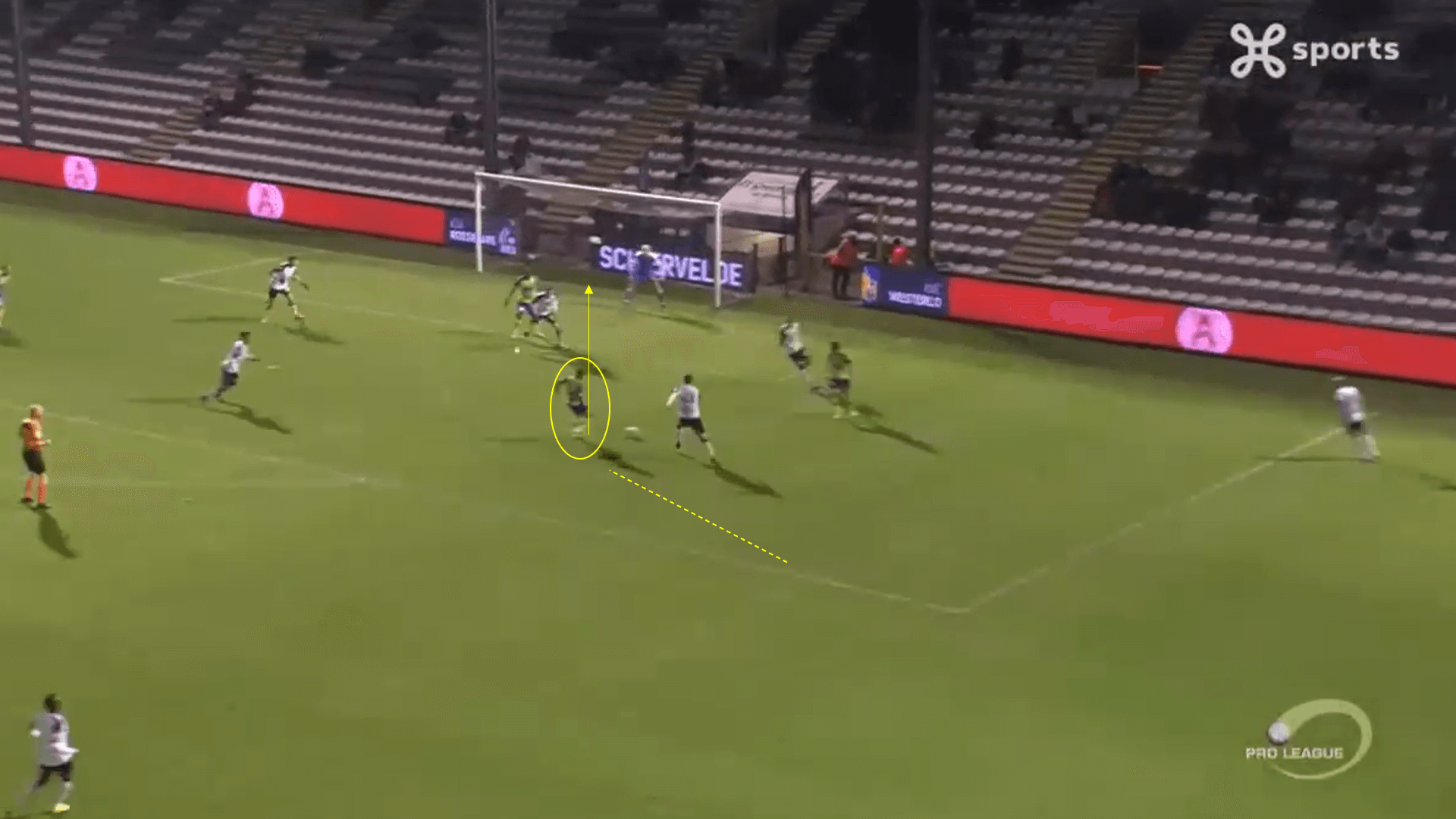 This sort of decision making should impress teams in the Pro League, as it shows that Abrahams is not a selfish player, and has been able to make the right decisions to score his goals, rather than scoring because he tries at every opportunity to find the net.

Abrahams is not just a goal scorer, he is also a provider. With six assists this season he once again exceeded expectations, with his xA at 4.32 he averaged 0.23 assists per 90. When we look at shot assists, Abrahams is comfortably in the top 10 for the league with 1.65 per 90. 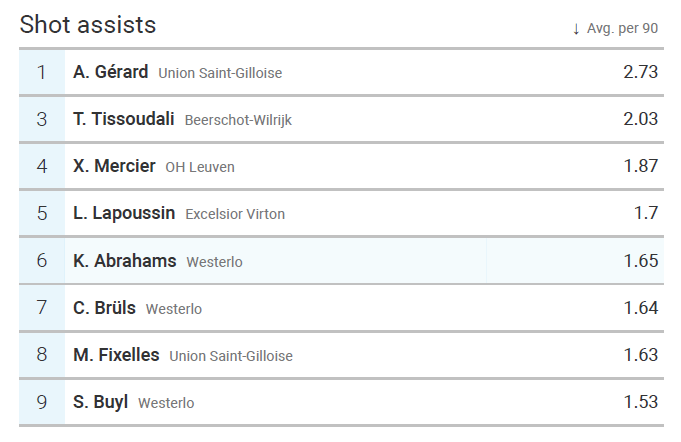 Despite being strong with both feet and a good finisher, Abrahams is unselfish and uses his already highlighted footballing intelligence to look for the best option. Many of his assists have come from areas where he would be well within his rights to shoot, yet instead, he has looked for the pass to create an even better option for Westerlo.

For example, in the game against Lokeren, we see that Abrahams has been released on the right hand side. He certainly has the pace and skill to drive into the box and take a shot from this position, even with the covering defender. We also see that there is another Westerlo player at the bottom of the screen in open space. 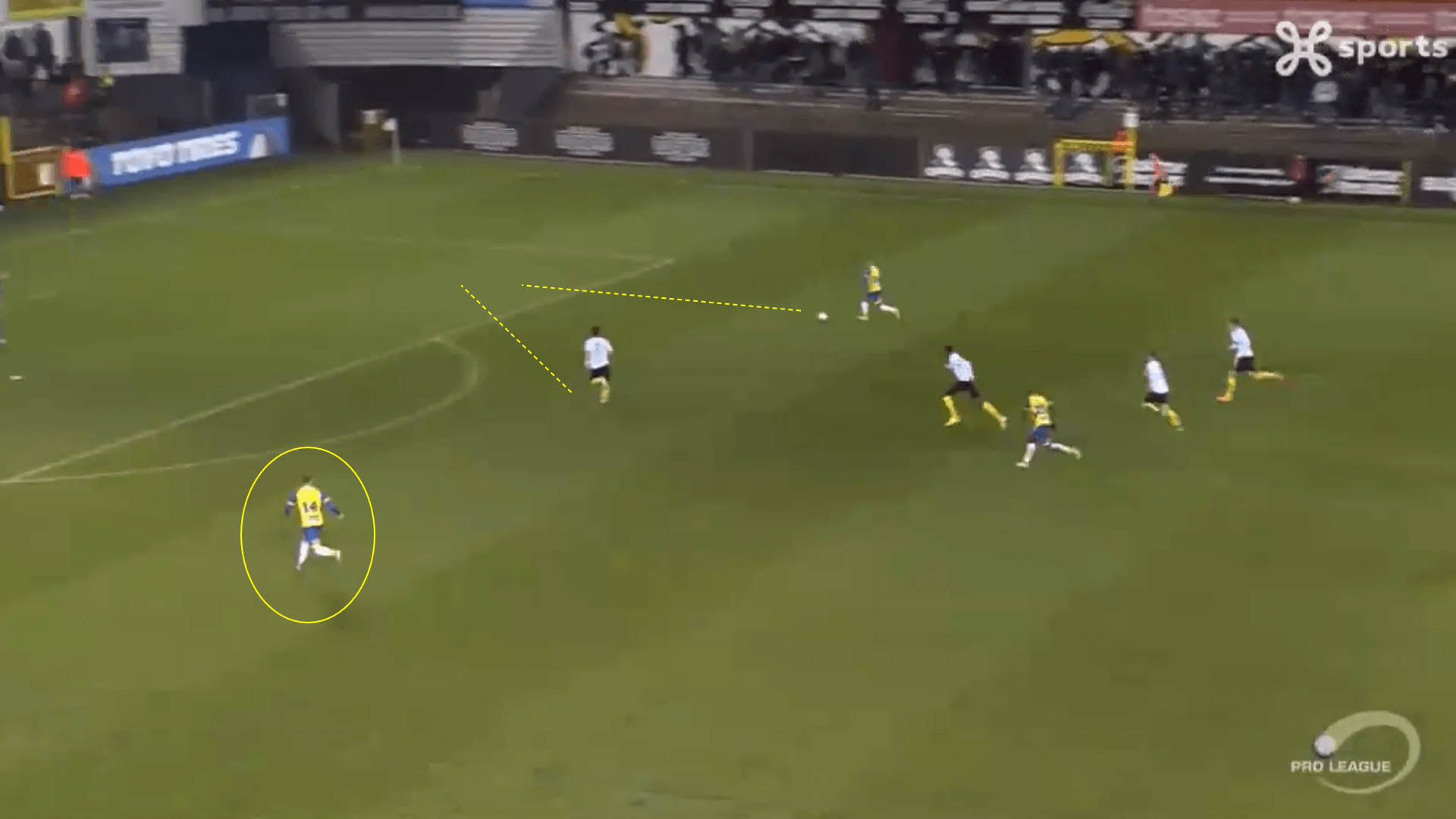 Rather than using his pace to push into his own shooting opportunity from a tighter angle, Abrahams allows the defender to come across to him, freeing up his fellow Westerlo player in the box. Abrahams ensures he dragged the defender towards him to open up the space, while possessing the ability to find his teammate in the box, who then provides the finish. 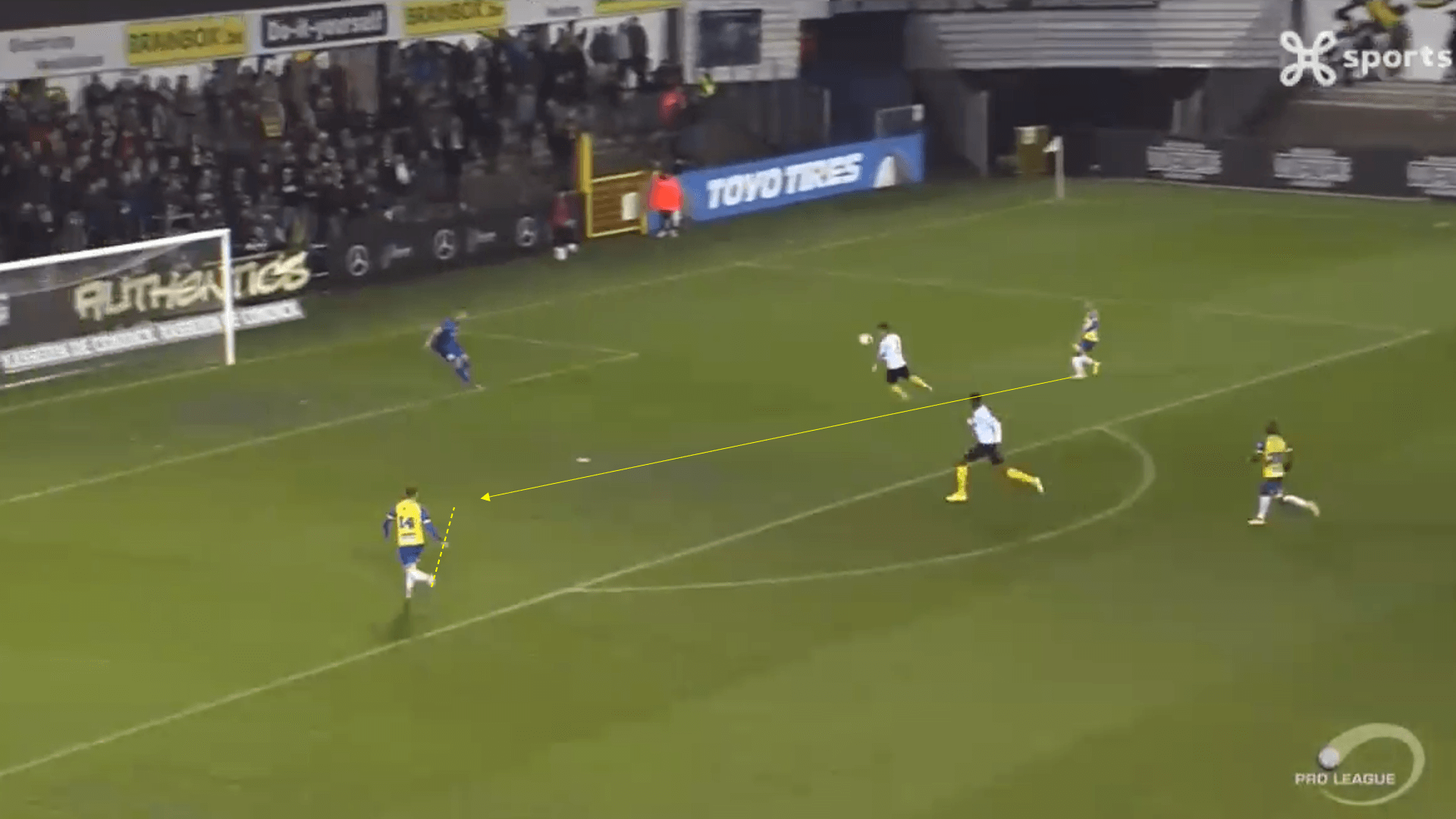 This example highlights the intelligence of Abrahams, as well as his eye for an assist. When we combine that with his above eye for goal, we find a very well rounded attacking player. Being able to create and finish chances suggests that Abrahams is ready in an attacking sense to make the step up to the Pro League and perhaps even other stronger European leagues.

Working within the press

As a team, Westerlo are one of the top sides when it comes to average ball recoveries per 90, with 79.96. They sit second overall, and also like to win the ball higher up the field, with 12.46 of these recoveries coming in the final third. While they sit fifth in pressing intensity, with a 9.93 average, the data clearly indicates that tactically the side are looking to win the ball back higher up the field.

Despite his relatively small size, Abrahams can provide a great defensive pressing option for any side. He is willing to put a shift in on the defensive end, something any team would benefit from. If we add this to his attacking output, we find a well-rounded winger with plenty to offer.

Clearly, Abrahams is ready to have another go at the Pro League. One of the better players in the second tier of Belgian football, it will be surprising if the South African is not in demand. Westerlo have Abrahams under contract until 2021, so they have a choice to make. Either they cash in on him over the summer, or hope that he can lead them to promotion next season and then sign a new deal following that.

With a transfermarkt market value of £585k, plenty of clubs will be sniffing around the Westerlo star this summer. At only 23 years of age, he is also still developing as a player, and will hopefully improve over the coming seasons.