Football is well back underway and with matches being played almost every day in the Premier League, teams have quickly racked up to five games that have already determined their ‘post-lockdown’ form. Carlo Ancelotti’s Everton have had a stumbling restart, winning two of their four matches and losing versus Tottenham as well as a dour goalless draw with Merseyside rivals – and now Premier League champions – Liverpool. However, the Toffees have struggled for goals with only three goals in the four matches since the restart. Ralph Hasenhüttl’s Southampton have been in fine form since the restart with three wins out of four, including a 1-0 win over Manchester City. The Saints have scored seven goals since the restart with ex-Liverpool striker Danny Ings bagging himself three in the process. The match was not of huge significance, both teams still had a very slim chance of reaching the European qualification places, but the game was primarily about pride and finishing as high up the table as possible, maximising prize money.

In this tactical analysis, we will provide an in-depth analysis of how Southampton were able to dominate the first half and should have been clear at half-time as well as discussing the tactics and formation changes made by Everton and Ancelotti that allowed them a lot more joy in the second half.

Both teams would line-up in a 4-4-2 with Everton having England number one Jordan Pickford in goal, with a back four comprising of captain Séamus Coleman, Yerry Mina, Michael Keane, and Frenchman Lucas Digne. Tom Davies lined up alongside André Gomes in the centre of midfield with Alex Iwobi starting on the right and youngster Anthony Gordon continuing his recent run in the team on the left. A powerful and pacey front two of Dominic Calvert-Lewin and Richarlison led the line for Everton. Gylfi Sigurðsson would only be good enough for a place on the bench.

Southampton’s 4-4-2 consisted of Alex McCarthy in goal behind a defence made of Tottenham loanee Kyle Walker-Peters, Jack Stephens, Jan Bednarek and Ryan Bertrand. Oriol Romeu was the defensively-minded midfielder with dead-ball specialist James Ward-Prowse alongside him. Nathan Redmond and Stuart Armstrong provided the width in support of front two – Che Adams and Ings. The rumoured transfer interest of Pierre-Emile Højbjerg returned from injury to take his place on the bench. 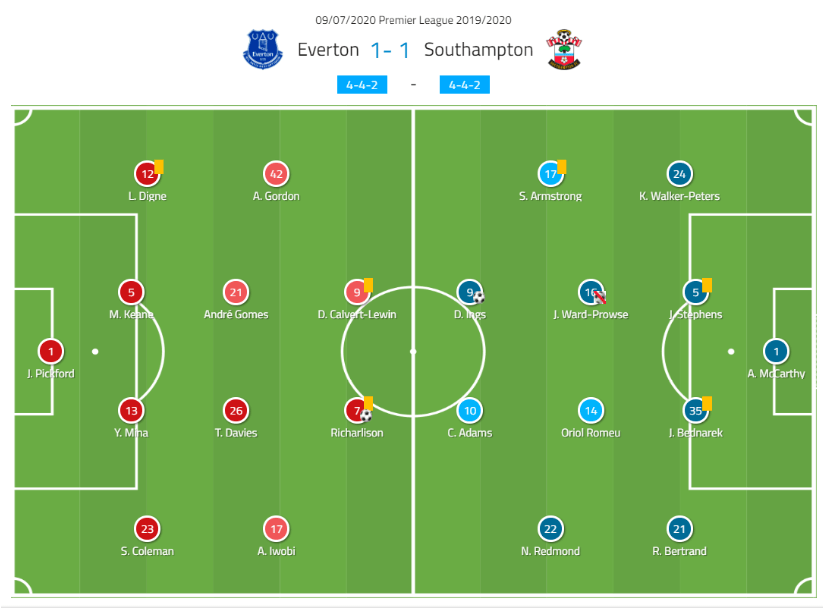 Southampton’s early high press caused no end of issues for Everton. The Toffees were struggling to play out past Hasenhüttl’s men and struggled to retain possession. If we look at Southampton’s PPDA (passes per defensive action) it becomes clear just how intense this press was. 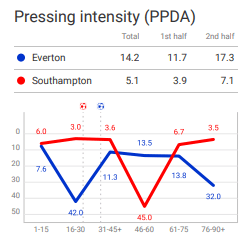 The image above shows us the PPDA for the match and Southampton’s PPDA for the first half was 3.9 – this means that every 3.9 Everton passes Southampton would respond with a defensive action. For reference, Liverpool and Manchester City are regarded as the two highest pressing teams and they average around nine. Southampton had Everton pinned in and it was due to a very clever ploy in Hasenhüttl’s tactics. 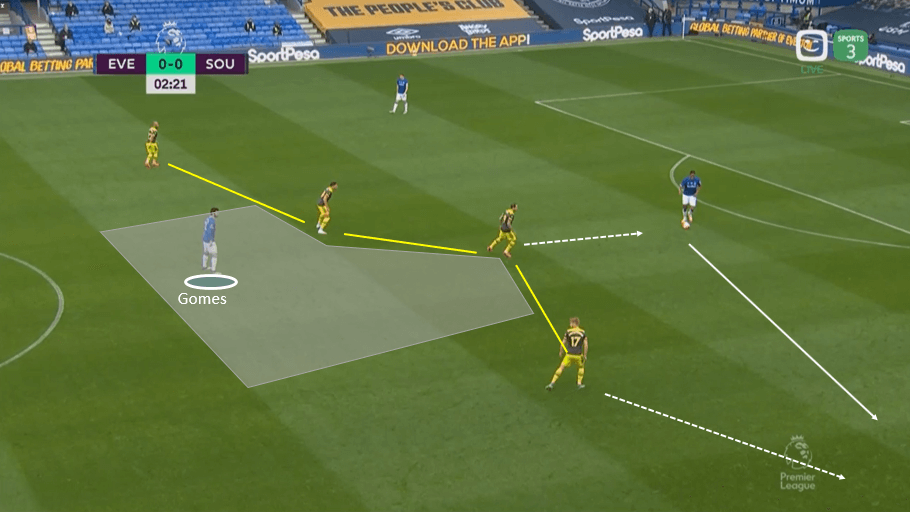 Here we can see that the Southampton wingers have pushed forward in support of Ings and Adams whilst Ings and Adams would aim to block the passing lanes into Everton’s midfielders. Southampton changed to a 2-4-4 formation when Everton were trying to play out.

Southampton went man for man in all areas of the pitch and it had a great effect as Everton were unable to cope with the high intensity. Below we see another example of Southampton going man for man. 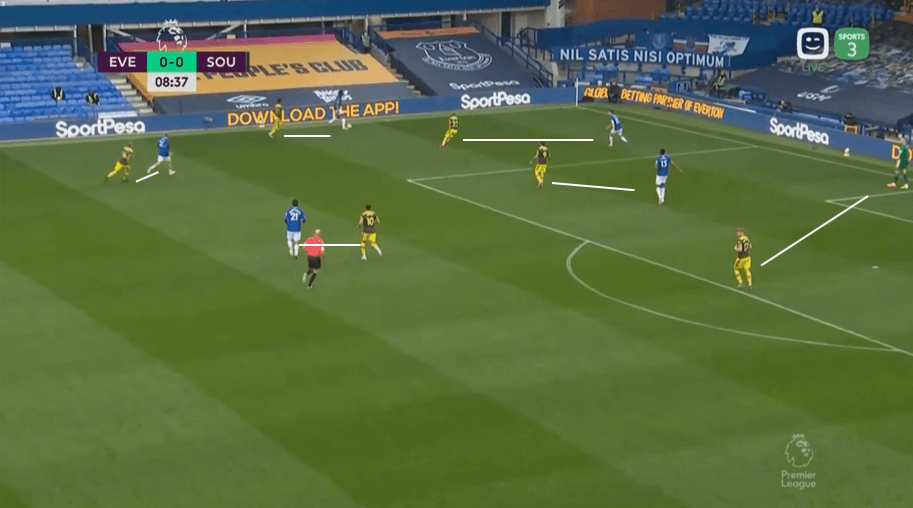 The Southampton players go man for man, with right-midfielder Armstrong coming across to aid in the pressing of Pickford, and after seeing two examples, we will look now into the tactics behind this press below. 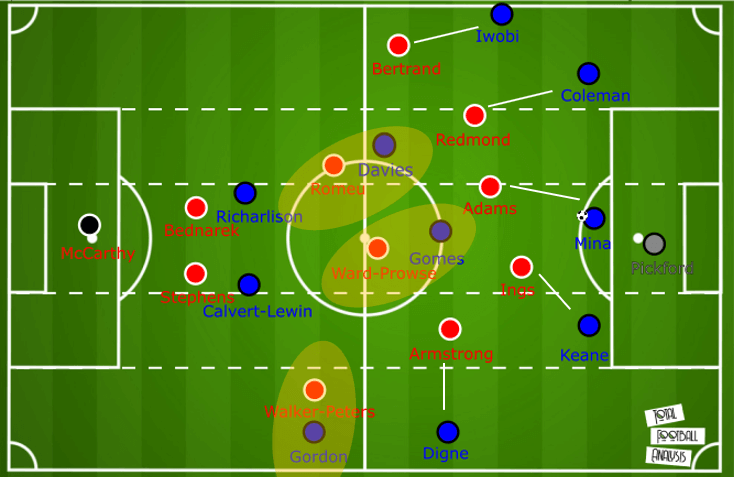 Here we see Southampton go man for man on every Everton player. The main tactical reasons for this are to prevent an opposition team playing out from the back and through the third. The aim is either to overturn possession by smart positional pressing or to force the opposition into hopeless long ball forward to relieve the pressure.

This was a good tactic for two reasons. Southampton were able to regain possession by forcing turnovers in dangerous areas, and if we look at the transitions from the match, we can see that Southampton have considerably more opponent half recoveries than Everton.

Another key aspect of Southampton’s press is that on many occasions it forced Everton to go long to Calvert-Lewin and Richarlison. The problem with this approach for Everton was that Everton’s midfield was not getting up in support of the strikers and often they would win the duel only to be crowded out by the recovering Southampton midfield. 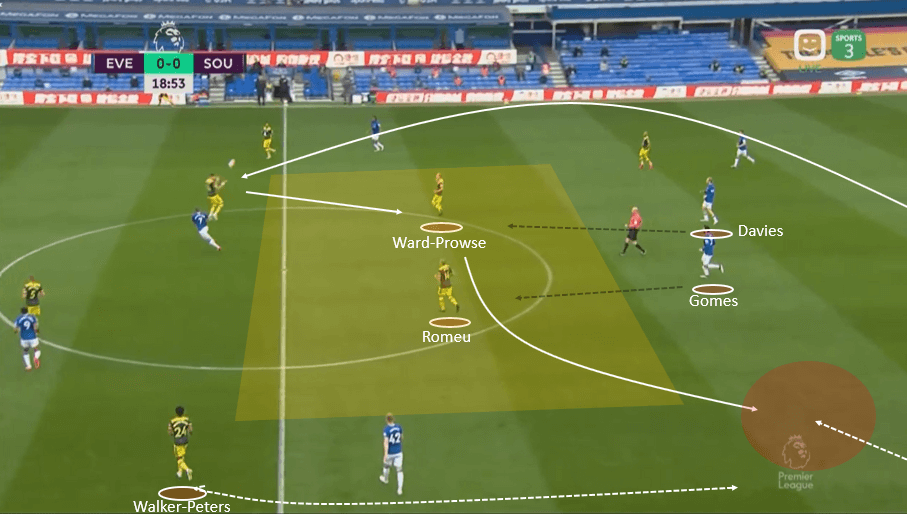 In the above example, we see the aftermath of a Pickford long ball forward – Richarlison loses the aerial duel and Southampton are free to get the ball under control in midfield with no significant pressure from Davies or Gomes in Everton’s midfield (the arrows are drawn to show where Gomes and Davies should have been). If Davies and Gomes had pushed higher up and applied more pressure to Romeu and Ward-Prowse, Southampton would have found it difficult to play forwards. The lack of pressure allowed the Saints midfielders to dictate play under no real pressure and Ward-Prowse managed to turn on the ball and progress play forwards to Armstrong (who moved centrally into the red area). As Armstrong moved central, Walker-Peters went on the overlap to provide Southampton’s width.

This happened on several occasions throughout the first half and Southampton were by far the better team in the early exchanges, having a goal ruled out for a narrow offside and Ward-Prowse failing to convert his penalty. Everton were on the ropes and Southampton’s pressure eventually had a break-through with Ings managing to get the ball over the line in a scrappy finish.

Southampton’s ploy to overload the middle

Southampton often brought Armstrong and Redmond inside. Firstly, overloading the midfield where Everton had struggled for influence. Secondly, this allowed full-backs Walker-Peters and Bertrand – or Redmond, in some cases – to push further forward and it became a tactic from Southampton that they would look to combine centrally before trying to get in behind the Everton defence with through balls played in between their centre-back and full-back. We can see an example of this below. 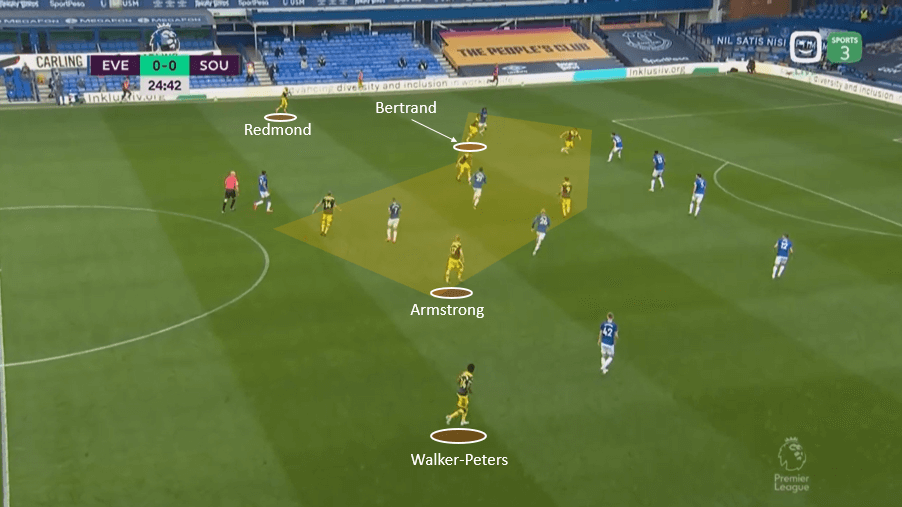 If we look at Southampton’s average positions, we can see just how central right-midfielder Armstrong was, which leaves Walker-Peters with space in front of him. 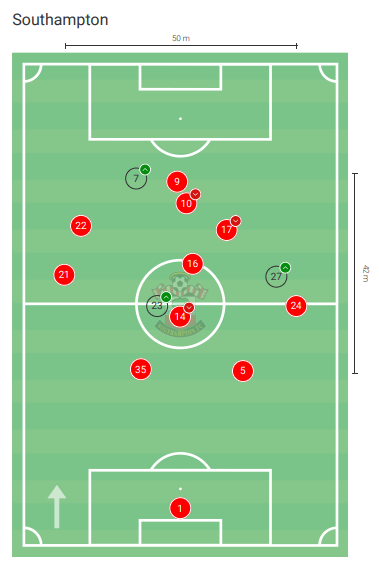 The fluid movement of Southampton caused Everton plenty of issues in the first-half and the Toffees did not really come up with a solution in the first half.

Everton’s change from playing to feet to in behind

For large parts of the first half, Everton had looked to play into the feet of Calvert-Lewin and Richarlison with limited success. Following the first-half drinks break, Everton had a change in approach as they started to clip balls into the half-space that Southampton had vacated in order to maintain a high press.

In the image below, we can see an example of Everton looking to target the half-space. Gordon vacated the wide-area so that Digne has a 1v1 with Walker-Peters. This gives Digne the option to play the ball in behind Walker-Peters for Gordon to run onto or, as Digne decided to, drive into space centrally that Gordon has just vacated. 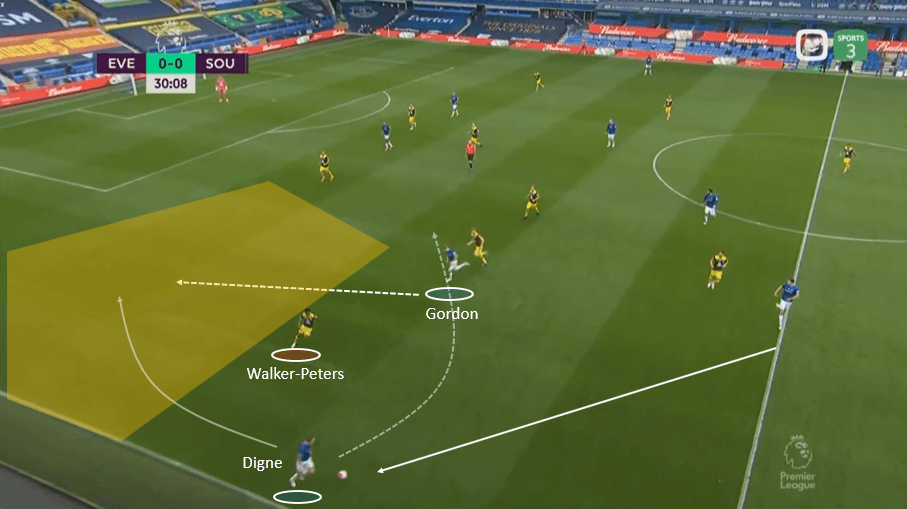 This change saw Everton get the equaliser. Southampton were now tiring after an incredibly intense first-half and the press had dropped off slightly – this combined with the fact that Everton were looking to play in behind at any given opportunity meant that the Southampton defensive line dropped deeper and as a result, creative players such as Digne and Sigurðsson, who had replaced the injured Gomes, were able to start dictating play from deeper positions.

The image below shows how much time and space Digne had on the ball to pick out his assist to Richarlison. 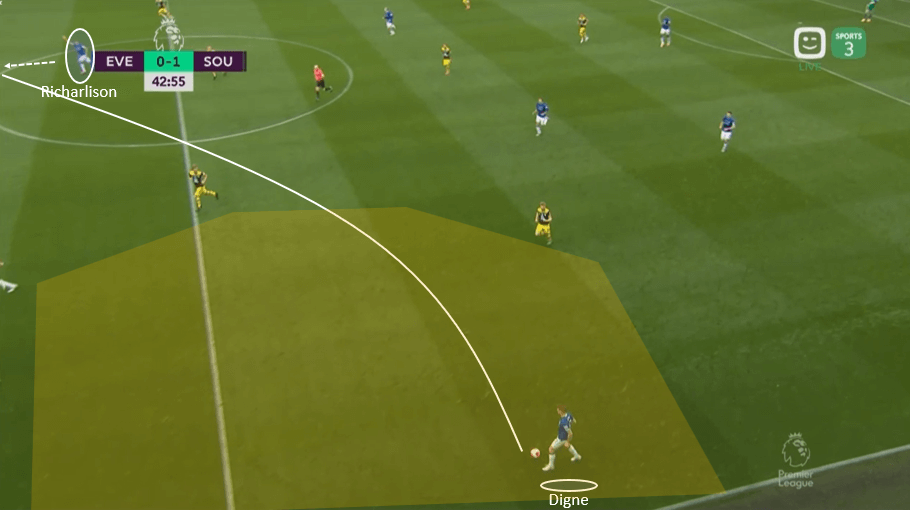 There is no doubt that Southampton were the better side in the first half, they out-worked, out-smarted, and out-played Ancelotti’s Everton side. Just in the first-half, Southampton had an xG of 2.18. Everton’s xG was a mere 0.42, yet here they were drawing 1-1 at half-time despite being quite clearly second-best.

Ancelotti tinkers with his tactics at half-time

Ancelotti has a reputation for being a tactical mastermind and he exhibited that in the match versus Southampton. His decision to substitute Iwobi for Djibril Sidibé and change Everton’s formation to a 5-3-2 was a masterstroke. Everton had struggled to have an impact in midfield and the Southampton duo had bossed the game. 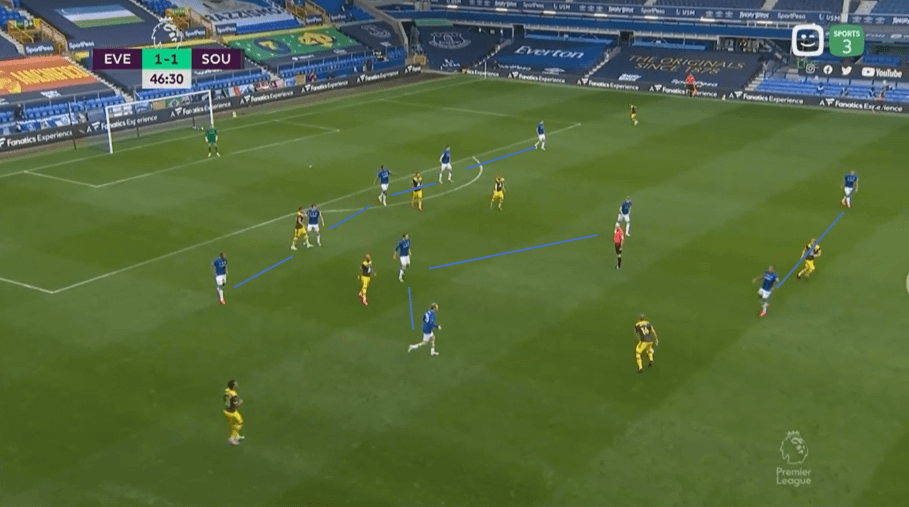 This allowed Everton to now have superiority in midfield and it enabled one of the midfield three, usually Davies, to push higher up in support of the front two. Once again, this prevented Southampton from having that control in the midfield that they had enjoyed in the first half and with the support of Digne and Sidibe out-wide providing the width, Everton had five shots in the first 25 minutes of the second half and were causing problems for a tiring Southampton. 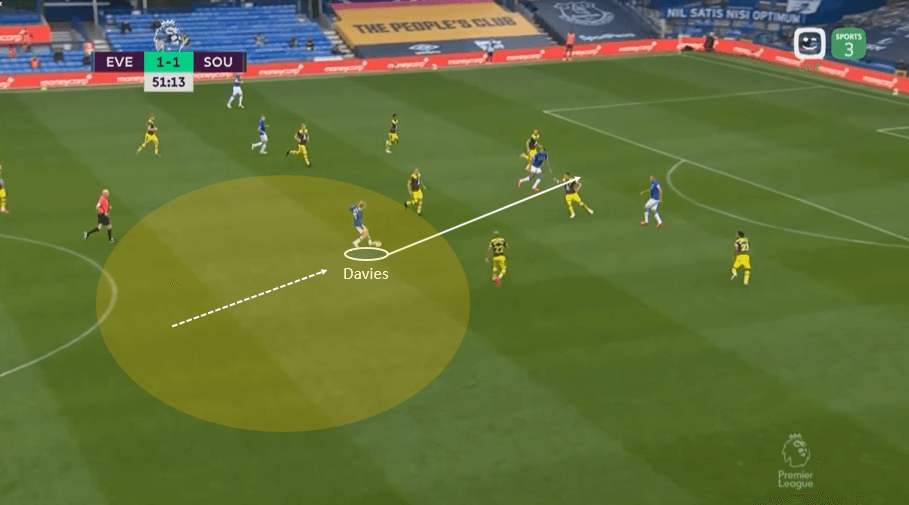 Both teams had appeared to cancel each other out and the match steadily became stale with neither team able to force another meaningful chance on target, which shows in the match’s xG tracker. The first-half was much more volatile in terms of xG.

It was ann interesting game that started at a ferocious pace and was dominated by Southampton in the first-half. Ultimately, however, the Saints were unable to make their early dominance pay. A goal chalked off for offside and a missed penalty cost Southampton the three points. Everton never really looked like winning the match. The tactical change at half-time was a clever move by Ancelotti that made Everton more robust and competitive in the second-half but in truth, neither team in the second-half had done enough to deserve to win and the match became more stable as the match wore on.

In their next match, Everton travel to the Molineux to play Wolves and Southampton travel to Old Trafford to play the in-form Manchester United.