Southampton hosted Manchester United in Saturday’s early kickoff in the Premier League. The Saints came into this game on the back of wins over Brighton and Fulham in the league and Carabao Cup respectively, while United had been defeated at home by Crystal Palace in their last game. Both clubs needed a win to boost their ambitions ahead of the international break, and this tactical analysis piece will look at both sides’ tactics and provide an analysis of why Manchester United were unable to break down a resolute Southampton side. 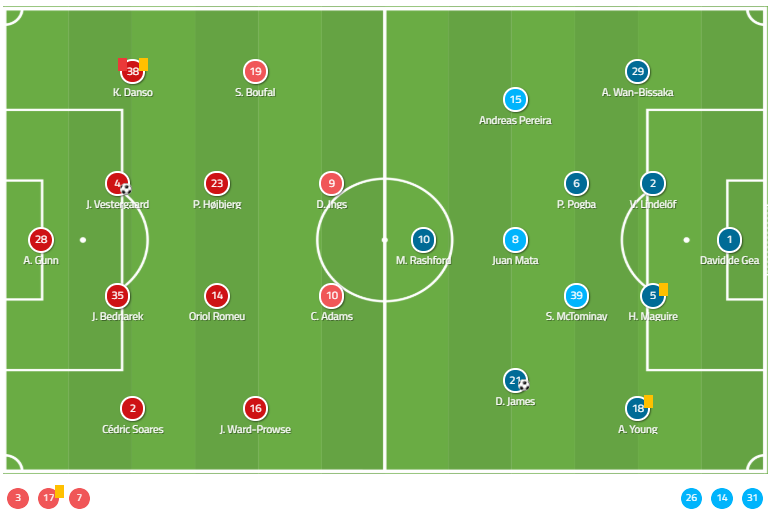 Ralph Hasenhüttl made a couple of changes from the side that beat Brighton, with Cédric replacing Yan Valery at right-back, and Sofiane Boufal coming in for the injured Nathan Redmond on the wing. Kevin Danso continued in an unfamiliar left-back role.

Ole Gunnar Solskjær was forced into a couple of changes, as Ashley Young and Juan Mata replaced the injured duo of Luke Shaw and Anthony Martial.

Hasenhüttl was renowned for the way his RB Leipzig side pressed from the front, and the Austrian has tried to implement the same tactic on the south coast as well. Southampton pressed United for most of the game, right up until Kevin Danso’s sending off in the second half, and this prevented United from playing out from the back for the most part.

When United did play out from the back, Southampton would aggressively press them, especially when the ball was moved out wide to the full-backs. This resulted in a turnover in possession a couple of times, but the Saints were unable to make the most of these opportunities.

This was a regular occurrence throughout the game, where United comfortably found space between the lines when attacking quickly and bypassing the Southampton press.

United find space, but do nothing with it

As mentioned above, United actually managed to get into decent positions quite regularly, especially in the first half. Southampton were playing with a narrow midfield, especially with Ward-Prowse coming in from the right-hand side, and while this was designed to constrict space centrally, it did not work too often in the first half. A lot of this was due to Daniel James and Andreas Pereira – their contrasting positions allowed United to find space between or behind Southampton’s lines –

As can be seen above, Pereira often came into central positions from his right-sided berth, thus overloading Southampton’s midfield and providing a passing option between the lines. This also allowed Wan-Bissaka to overlap, further stretching Southampton’s defence. James, on the other hand, would stay high up the pitch on the left, pulling Cédric towards him and further creating space centrally.

This was indeed how United scored their goal – Pereira, having come into a central position, combined for a quick one-two with McTominay who played the ball out to an unmarked James in a wide position, from where he smashed the ball in after cutting inside –

However, this was probably the only instance where United took advantage of their positioning. The story of the first half was one of missed opportunities – United repeatedly got the ball in good positions in midfield but poor positioning and decision-making let them down –

United did well in terms of getting the ball in good positions, but were let down by the lack of quality in their passing and movement.

Southampton tighten up in the second half

Whether by accident or design, Southampton were already getting better at closing down spaces centrally towards the end of the first half, especially when United took their time to build up instead of playing quick, direct football –

They continued in this fashion in the second half as well, especially after Danso’s dismissal in the 73rd minute. Hasenhüttl brought Maya Yoshida on for Adams, thus maintaining his four-man defence and putting all nine outfield players behind the ball in an attempt to constrict space centrally –

This was a tactic to be expected from a side playing with ten men; however, United lacked the guile and nous to be able to break through. Solskjær had brought Nemanja Matic on for Mata before the red card, and while this move seemed to be made to allow Paul Pogba to get further up the pitch, it robbed United of their sole creative outlet against a packed, deep defence. Matic was guilty of slowing play down, and he also does not possess the vision and creativity to pick the lock against a central block –

United were also guilty of being extremely passive, with almost no movement off the ball to try and stretch Southampton’s defensive lines –

It was thus no surprise to see United struggle to create any chances despite having a numerical advantage for more than twenty minutes.

While both sides needed a win, a draw was probably the most either side deserved. Southampton did well to get their equalizer, and successfully shut down Manchester United despite playing with ten men for almost half of the second period. United, on the other hand, actually did well when attacking quickly and directly, and struggled when they had to break down the Saints’ massed defence. On this evidence, as well as their previous game against Crystal Palace, it seems as if Solskjær’s side will find it difficult against sides who sit deep and put men behind the ball, but will do well against the bigger teams who afford them space in behind the lines. United’s inability to sign a creative midfielder looks more and more fatal to their top-four hopes with every such slip-up, and Solskjær will need considerable ingenuity if he is to find success this season.