Chelsea started the Premier League season with a very mixed performance. In the first three games, they recorded one loss, draw and one victory. The new manager, Frank Lampard has a big task since they were able to grab the lead at the previous two games, but then both times dropped the level of concentration which lead to them conceding goals. The same thing happened when they welcomed newly-promoted Sheffield United to Stamford Bridge on the Premier League’s fourth matchday.

Sheffield United’s tactics were to emphasize on keeping the home side far from the goal. This was successful as Chelsea were not able to break down their opponent’s pressing and create chances in the final third. The biggest opportunities came from Tammy Abraham who had a great performance, scoring two goals again after he did so against Norwich the previous weekend. Having said that, Chelsea were able to grab the lead, but then Sheffield equalised in the second half. This tactical analysis will investigate Sheffield’s tactics and how Chelsea ended up with a 2-2 draw after a two-goal lead. 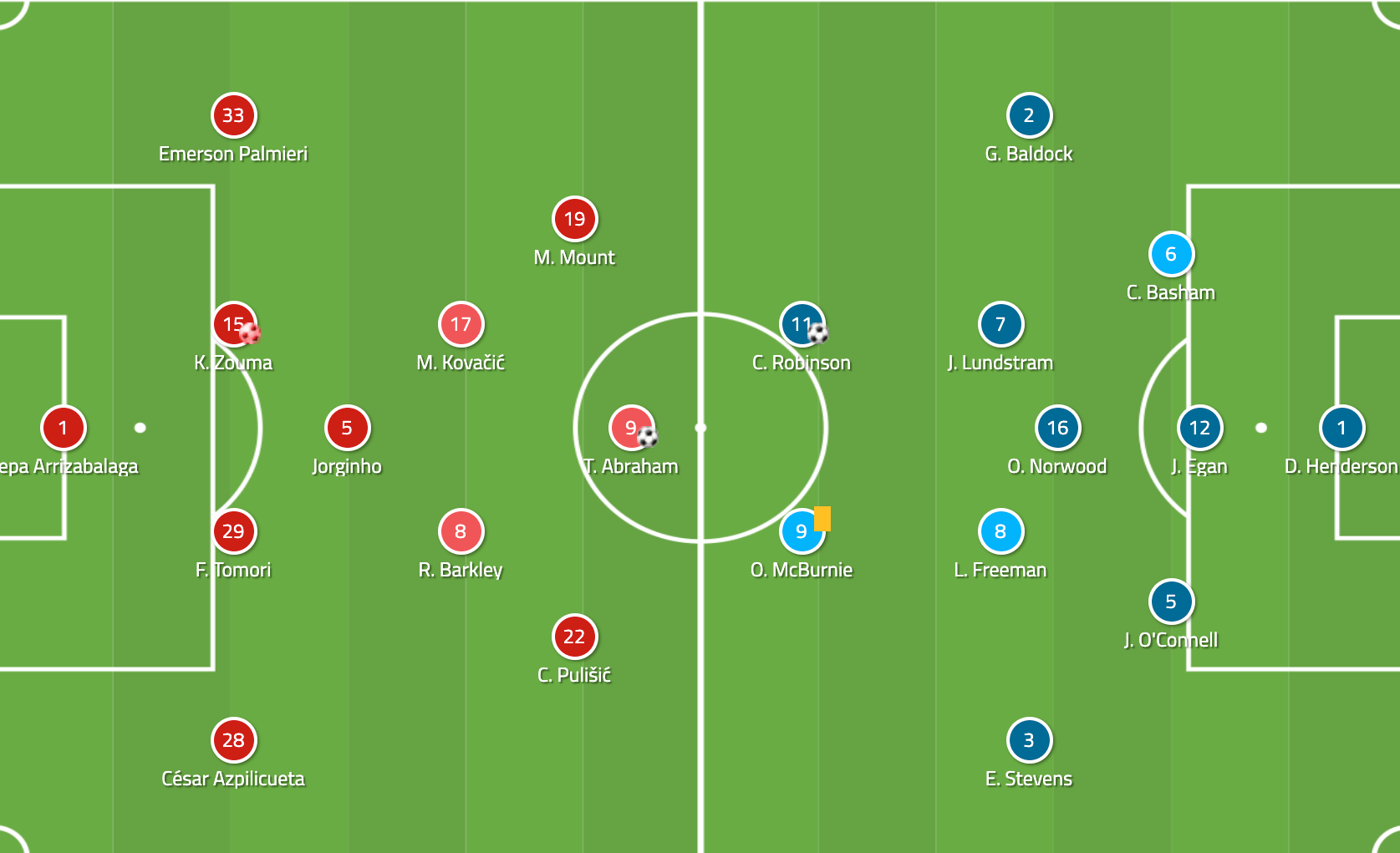 Lampard is still searching for his best team, especially due to the absence of important players due to injury. However, the only change for this match from the previous game was in the defensive department, where Fikayo Tomori replaced Andreas Christensen. Lampard deployed the same midfield of Ross Barkley, Jorginho and Mateo Kovačić, and the same attacking trident of Mason Mount, Abraham and Christian Pulisic.

On the other hand, Sheffield lined up in their usual 3-5-2 shape and Chris Wilder sent out the same players, except in attack where he employed Oliver McBurnie next to Callum Robinson instead of David McGoldrick.

As we experienced during the first few Chelsea games this season, Lampard usually asks his team to frequently build out from the back. This was evident in this game as well.

Furthermore, Chelsea looked to circulate the ball through their backline until they found a way to progress up the pitch. To achieve this, both Azpilicueta and Emerson stayed quite deep to offer passing options to the centre-backs. Therefore, Chelsea often circulated the ball from side to side.

This seemed a bit slow though. Jorginho also stayed deep as usual to help the build-up whilst the other two midfielders moved a bit higher and occupied the half-spaces which allowed Mount and Pulisic to stay wider during the build-up.

After the discussion of Chelsea’s basic approach with the ball, this analysis has to continue with Sheffield’s cautious approach to this game. The away side formed a medium to high block in a 3-5-2 structure, although it was often a 5-3-2 due to the wing-backs’ deeper positioning to cover Chelsea’s wingers.

This cautious approach started with the press, as they were not aggressive and did not press intensely, but rather maintained a block which was designed to protect the space and cover passing options thus making it difficult for the opposition to progress up to the final third. Moreover, Sheffield rarely put the opposition defenders under pressure, unless it occurred after a back pass. That could trigger the attackers’ pressing movement, but on these occasions, they were still cautious and thus never moved out of position too far.

If Sheffield did not press intensely or aggressively then how were they able to keep Chelsea far from their goal? It was simple. The midfield three and the two attackers’ high work-rate made it possible to create a hindrance for the home side.

The midfielders shifted from side to side to cover the options and space whilst the attackers also shifted to add more protection and cover Jorginho. In the instance below, Lundstram moves out to press Emerson. Norwood also shifted to cover the nearby midfielder, Kovačić. Also, Robinson supported this as he made the central areas inaccessible.

Of course, these shifting movements were not perfect. In here, you may see a good example of that. Freeman shifts out to close down Azpilicueta but due to Norwood’s late movement, Barkley becomes open to receive the ball from the full-back.

With this setup, they managed to reduce Chelsea’s attacking threat and control the dynamics of the game without the ball. This was evident since Chelsea had 64% of possession in the first half but it was ineffective.

As previously noted, Lampard’s men were not able to create quality chances or even reach the final third. Nevertheless, in spite of the lack of chance creation, we could see Chelsea’s attacking style. In this game, the recurring tactical element that the home side used was overloading areas to create a combination which could disrupt the opposition’s defensive organisation.

We saw moments like this quite frequently when the Blues positioned themselves closely to each other in order to create a passing combination. As an example of this, here is an occasion, where at least three or four Chelsea players occupied the same area. Abraham offered a passing option to Jorginho and Barkley positioned himself sideways to be able to receive the layoff from Abraham, and then play it forward. Meanwhile, Pulisic runs in behind opposition lines to offer an instant passing option.

The same principle could be seen in the seventh minutes, where Chelsea tried to overload the right wing. Pulisic dropped next to the touchline to offer a wide option to Azpilicueta whilst Barkley moved forward to offer a target in depth. However, besides the wing-back shifting movement, the midfield line also moved there to maintain control on the wide area and thus create a (5v4) numerically advantageous situation.

Therefore, Chelsea’s main attacking threat came from much more direct play than the previous examples showed. On some occasions, they used long balls which targeted Abraham in behind the opposition defence – their second goal occurred from this. Moreover, in the image below, Emerson used a volley to play the ball behind the defence. Abraham positioned himself on the opponent’s blindside to make a separation when the ball was played, thus he could collect the ball and almost scored.

Since Lampard is still in the early stages, Chelsea fans should not worry too much, however, this clash showed some issues, especially in concentration which cost them again. On the other hand, there were examples of really good attacking sequences. If Lampard could incorporate more short passing combinations, it could be extremely dangerous to opponents. Players like Kovačić could add more quality to the attacking phase as he did in this match in the first half.

Meanwhile, Sheffield United did a really good job in defence, although they made an error which caused them to concede a goal – Abraham’s second goal. However, in the second half, they seemed more confident, and with a more courageous pressing scheme, they could create havoc in Chelsea’s defence right after the break which ended up allowing them to score their first goal. The second one was also a great display of their attack, although Chelsea’s errors had a big contribution to this draw. Despite the result, Sheffield were not able to create too much of an attacking threat for Chelsea. They only generated 1.1 xG due to Chelsea’s good counter-pressing.